The sign for Cherokee Guns shows Reps. Alexandra Ocasio-Cortez, Ilhan Omar, Ayanna Pressley and Rashida Tlaib, who have come to be known as “The Squad” — with “The 4 Horsemen Cometh” written above their photos. The “cometh” is crossed out and replaced with “are Idiots.”

The store’s owner, Doc Wacholz, said that he chose the women because of their “their message of turning this country into a socialist country,” he told CNN affiliate WTVC.

President Donald Trump recently tweeted that “‘Progressive’ Democrat Congresswomen” should “go back and help fix the totally broken and crime infested places from which they came.” He did not name them, but four congresswomen of color — Ocasio-Cortez, Omar, Pressley and Tlaib — have been outspoken about Trump’s immigration policies. Three of the four are natural born US citizens, and Omar, who was born in Somalia, became a US citizen in 2000.

“I don’t care if it was four white women or four white guys that had their view — they’d be on the billboard,” he said.

Tlaib denounced the billboard, saying in a tweet, “How the hell is this not inciting violence?”

Pressley said “racist rhetoric” from Trump “has made hate our new normal.”

The billboard is being removed and another has already been designed, according to Danny Coleman, a salesman for the billboard company Allison Outdoor Advertising.

Wacholz changes the signs at that particular billboard about every three weeks, and the most recent had only been up since Tuesday, Coleman said.

The signs in the past also have been political, Coleman said.

“It broke our hearts that the controversy happened. Freedom of speech is a right. Unless it is something illegal or offensive, we use our best judgment and let it go. It is tragic what happened. He has been a great client of ours for a while, he just has his beliefs,” Coleman said.

“I wish it hadn’t happened,” Coleman said. “I didn’t want to hurt anybody. … I hope that we can heal from it and people can forgive.” 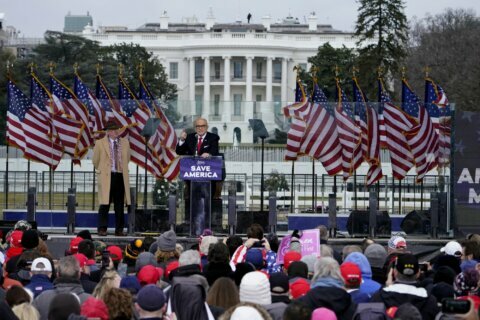