CORONAVIRUS NEWS: Funding for overdue gas, electric bills | Closing vaccine gap for Latinos in Md. | How many vaccinated in DMV?

Of protests and panda cubs: The biggest DC-area stories of 2020 that weren’t about the coronavirus

No doubt about it, the global coronavirus pandemic swallowed up 2020 with its terrible toll on human life, the economy, school, work — in short, almost every facet of our lives. And the headlines on WTOP.com certainly reflected that.

Here’s a look at some of the year’s biggest D.C.-area news stories that had nothing — mostly — to do with the coronavirus pandemic. 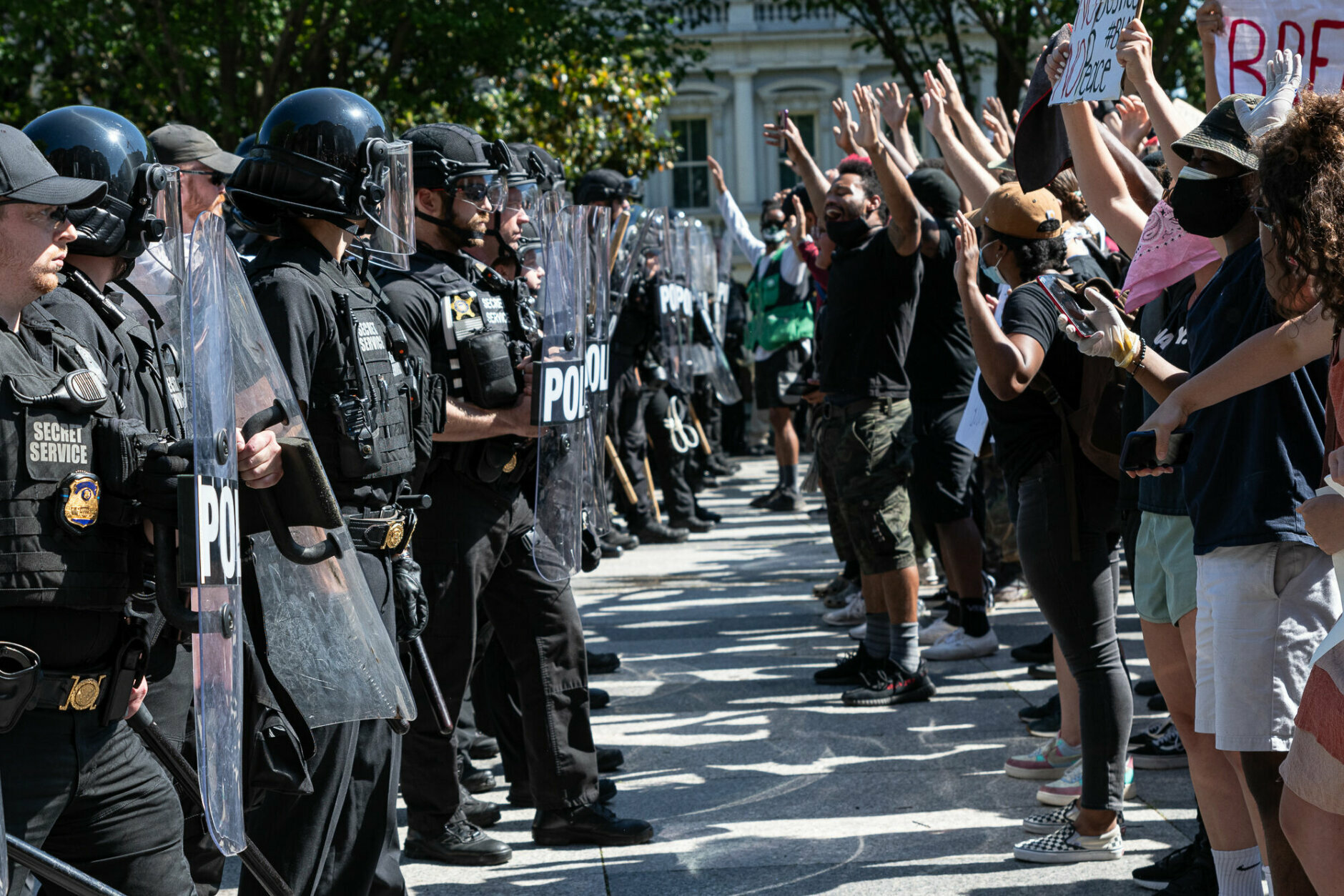 1/7
On the tenth consecutive day of protests over the killing of George Floyd, protesters hold another “die-in” in the slain Minnesota man’s honor at the newly-christened Black Lives Matter Plaza on June 7. Two days earlier, D.C. Mayor Muriel Bowser employed city staff and D.C.-area artists in the writing of “Black Lives Matter” in yellow paint for two blocks of 16th Street north of the White House. (WTOP/Alejandro Alvarez)

Sparked by the killing of George Floyd in police custody in Minneapolis in May, D.C. became one of the national flash points of protest related to race and policing in America this summer.

The epicenter was Lafayette Square and the streets around the White House where on June 1, broadcast live on television to the nation, law enforcement officers using batons, shields and chemical agents forcefully cleared large crowds of protesters before President Donald Trump, flanked by other top officials, walked to nearby St. John’s Church and brandished an upside-down Bible.

The use of federal officers to police the streets of D.C. drew criticism from D.C. Mayor Muriel Bowser, but she soon faced questions about her own police force’s tactics after a large crowd of peaceful protesters were penned on Swann Street — a quiet, leafy residential street in Northwest — as part of a controversial police tactic known as “kettling.”

Police deployed flash bangs, blocked-off alleyways and deployed a chemical irritant. Faced with arrest for violating the city’s emergency curfew, some protesters camped out in houses where owners had opened their doors.

Among those taking refuge: WTOP’s own Ken Duffy, who was on the streets of D.C. to cover the protest.

Over the summer, the protests continued, and ultimately several hundred people were arrested.

Bowser positioned herself as a high-profile Trump opponent and even commissioned D.C.-area artists to paint the pavement on 16th Street NW across the street from the White House in enormous, blazing yellow letters, officially re-christening the street “Black Lives Matter Plaza.”

Critics, including those affiliated with the anti-racist organization, decried the paintjob as a PR stunt.

In response, Bowser told reporters: “Black Lives Matter is very critical of police. They’re critical of me. But that doesn’t mean that I don’t see them and support the things that will make our community safe — and that we don’t all have a larger responsibility in the nation’s capital to send that very clear message to our nation.” 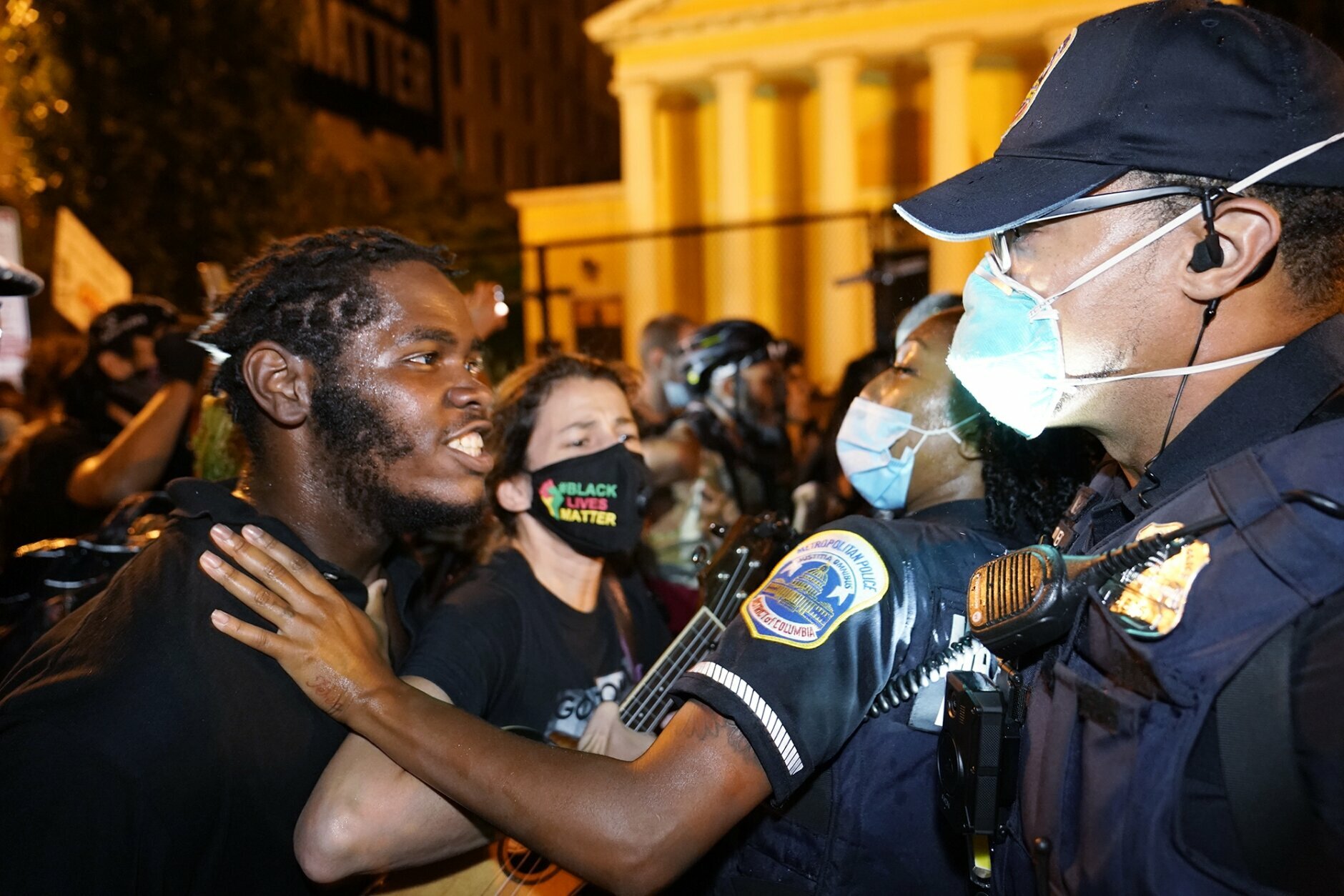 George Floyd’s death in May also brought unprecedented scrutiny to police departments across the country, sparking calls for reform and tighter oversight of police departments — and, in some of the largest jurisdictions in the D.C. area — leadership shake-ups.

By the end of the year, police reform commissions had been set up across the region and the chiefs of police in Prince George’s County in Maryland and Fairfax County in Virginia, as well as the police chief of the D.C. police had all either left their posts or announced plans to do so.

In Prince George’s County, Chief Hank Stawinski said in June he was stepping down from one of Maryland’s largest law-enforcement agencies shortly after more than a dozen officers of color filed a lawsuit alleging “pervasive” racism and discrimination in the department.

Several months later, the department paid out a $20 million settlement to the family of a D.C. man who was shot to death while handcuffed in the front seat of a police cruiser in January — in what was believed to be among the largest such settlement in the U.S. involving someone killed by police.

Last month, Fairfax County Police Chief Ed Roessler said he was retiring in February after leading the largest police department in Virginia since 2013.

Then, in a move that surprised many, D.C. Police Chief Peter Newsham, who has only served as D.C.’s top cop for three years, said he would leave his post to become chief of the much smaller police force in Prince William County, Virginia.

Newsham’s resignation — he has said he plans to stick around until after the presidential inauguration — came after the D.C. Council approved sweeping police reforms and trimmed his department.

The department’s handling of the summer’s wave of protests also came in for criticism, including from activist groups who argued the department was tougher on anti-racist demonstrators than on Trump-affiliated groups who descended on D.C. in a series of rallies after Trump’s election loss and violently clashed with counterprotesters.

“We’re losing a good cop, but sometimes a fresh face can be good, too,” Mendelson said.

Other policymakers say the entire structure of policing in the U.S. — and the D.C. area — needs rethinking. 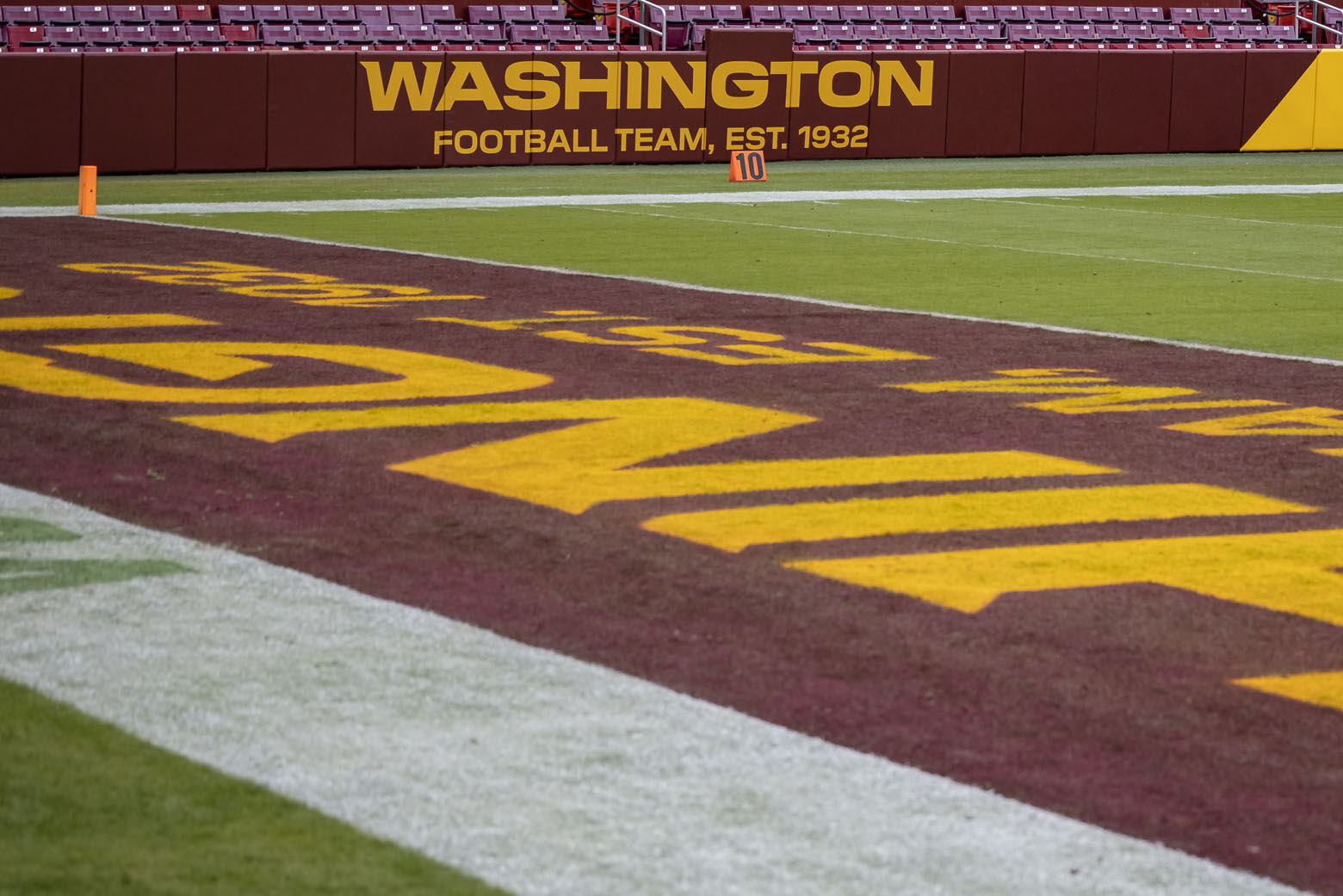 Following the death of George Floyd in police custody in Minneapolis, the calls for change erupted that around the country took many forms.

In June, Washington’s NFL team began grappling with its racist legacy. The team was founded in 1932 by George Marshall Preston, a segregationist who refused to sign Black players until he was forced to do so.

But changing the team’s traditional name — which many consider a racist slur referring to Native Americans — seemed like a taller order.

Floyd’s killing in May spurred a nationwide reckoning over racism and equity in many facets of American life. There was fierce debate over Confederate monuments, statues, streets and other markers in the D.C. region.

And in July — after Nike and Amazon said they would no longer sell the team’s gear on their sites and after team officials announced a thorough review to study the name — the ground shifted and “never” finally came: The old name was no more.

To start with, the team settled on a placeholder name, simply “Washington Football Team.” But the basic moniker has taken root.

And — for the first time in a while — the team is winning again. At least for now. 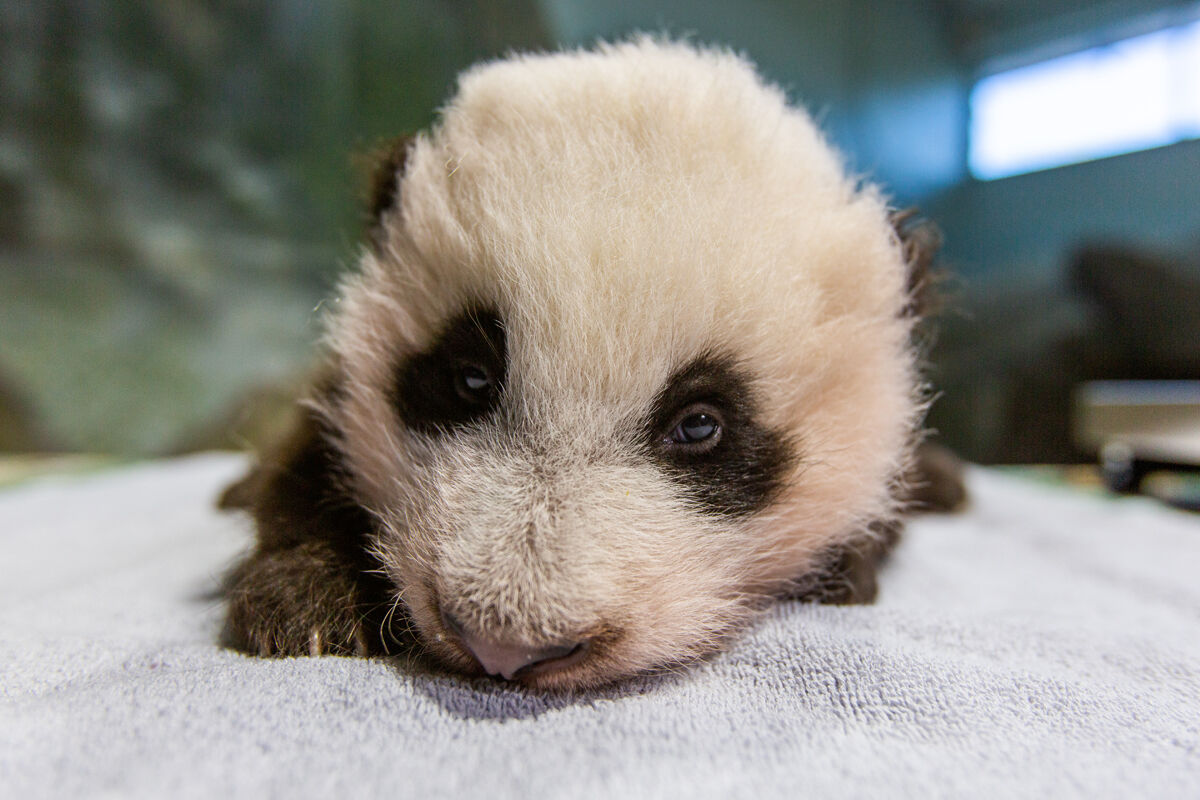 It turned out 2020 had a few nice surprises in store for us — or at least one: The birth of the new panda cub at the National Zoo.

Word came in August that giant panda matriarch Mei Xiang could be pregnant — but there’d been false alarms before — and, besides, at 22, she would be the oldest giant panda in North America to give birth.

Nevertheless, delighted viewers watched the delivery live on the zoo’s Panda Cam on Aug. 21 as Mei Xiang welcomed her fourth cub into the world.

In the months since, viewers glued to the livestream have watched the pink, hairless creature about the size of a stick of butter develop into an adorable ball of fluff — 21.2 inches long from nose-tip to tail and 13.4 pounds at last checkup — and even begin to take his first steps.

Still, all good things must come to an end. Earlier this month, zoo officials said that a long-running agreement with Chinese wildlife officials would be extended for a few more years but that come the end of 2023, the little guy as well as his parents — Mei Xiang and pop, Tian Tian, who have lived at the zoo since 2000 — would be headed back to China. 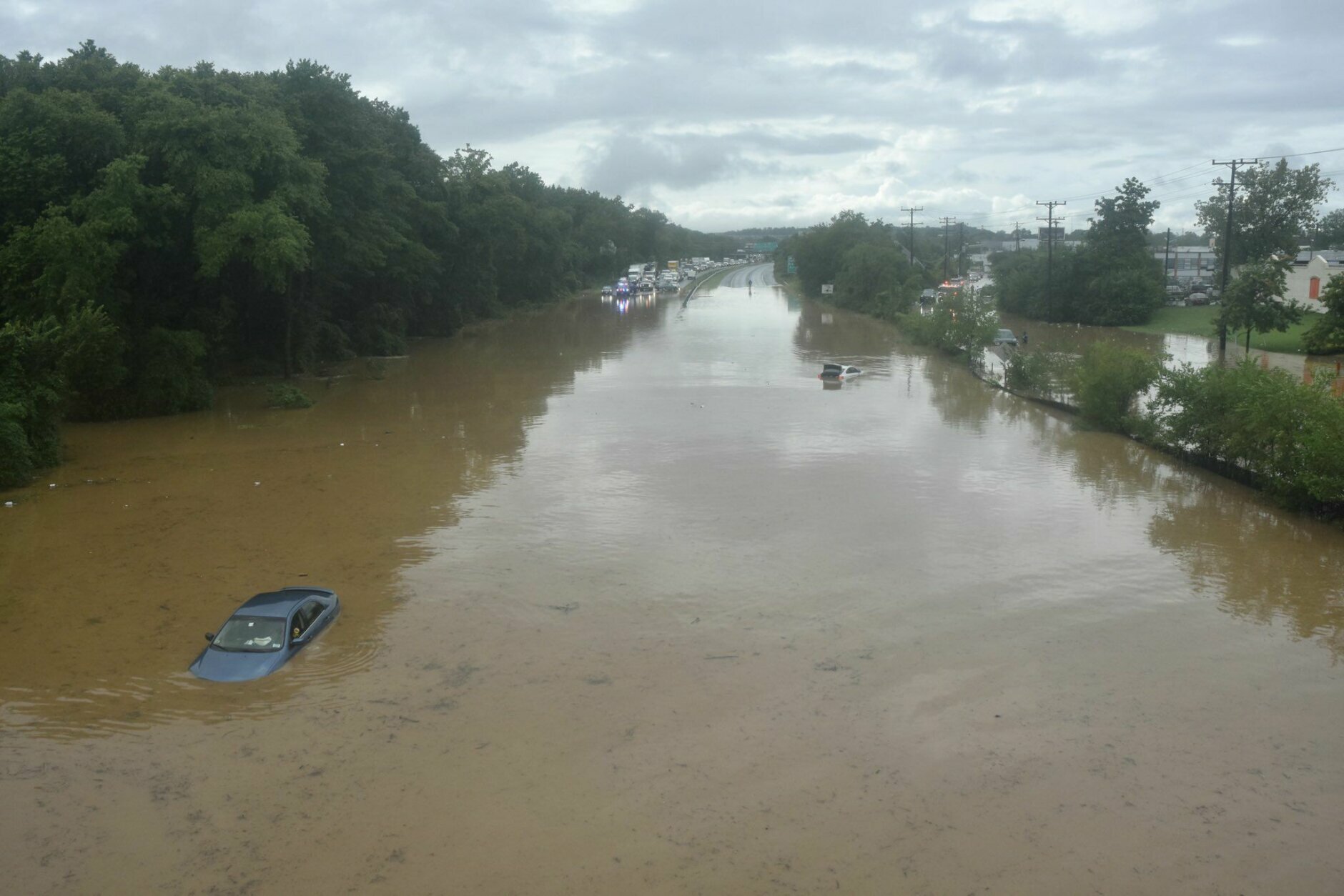 Weather’s always a big deal around here. Why else would we bring it you every 10 minutes “on the 8s?”

With so many people working remotely amid stay-at-home orders and other coronavirus restrictions, traffic, by and large, wasn’t what it usually is. But the D.C. area still saw its share of wild weather this year.

In early February, a series of winter thunderstorms whipped up a total of five tornadoes across the D.C. region, including one in Loudoun County, Virginia, and two in Montgomery County, Maryland.

The National Weather Service said the sheer number of twisters was “atypical” for February.

In late summer, Tropical Storm Isaias blew through the D.C. region, bringing several inches of rain and flooding and downing trees and power lines. Tragically, one person was killed in St. Mary’s County, Maryland, when a tree fell on her car as she was driving.

But it was a late summer storm that led to some of the most dramatic photos of the year, courtesy of WTOP’s own Dave Dildine.

Heavy rain in early September caused flash flooding across the D.C. area, including on Route 50, one of the major commuter routes into and out of D.C., trapping drivers in rapidly rising floodwaters.

Dildine had his camera at the ready as rescue crews launched an inflatable boat to rescue one of the drivers, who had resorted to using a cup to scoop water from her lap as she waited for help. 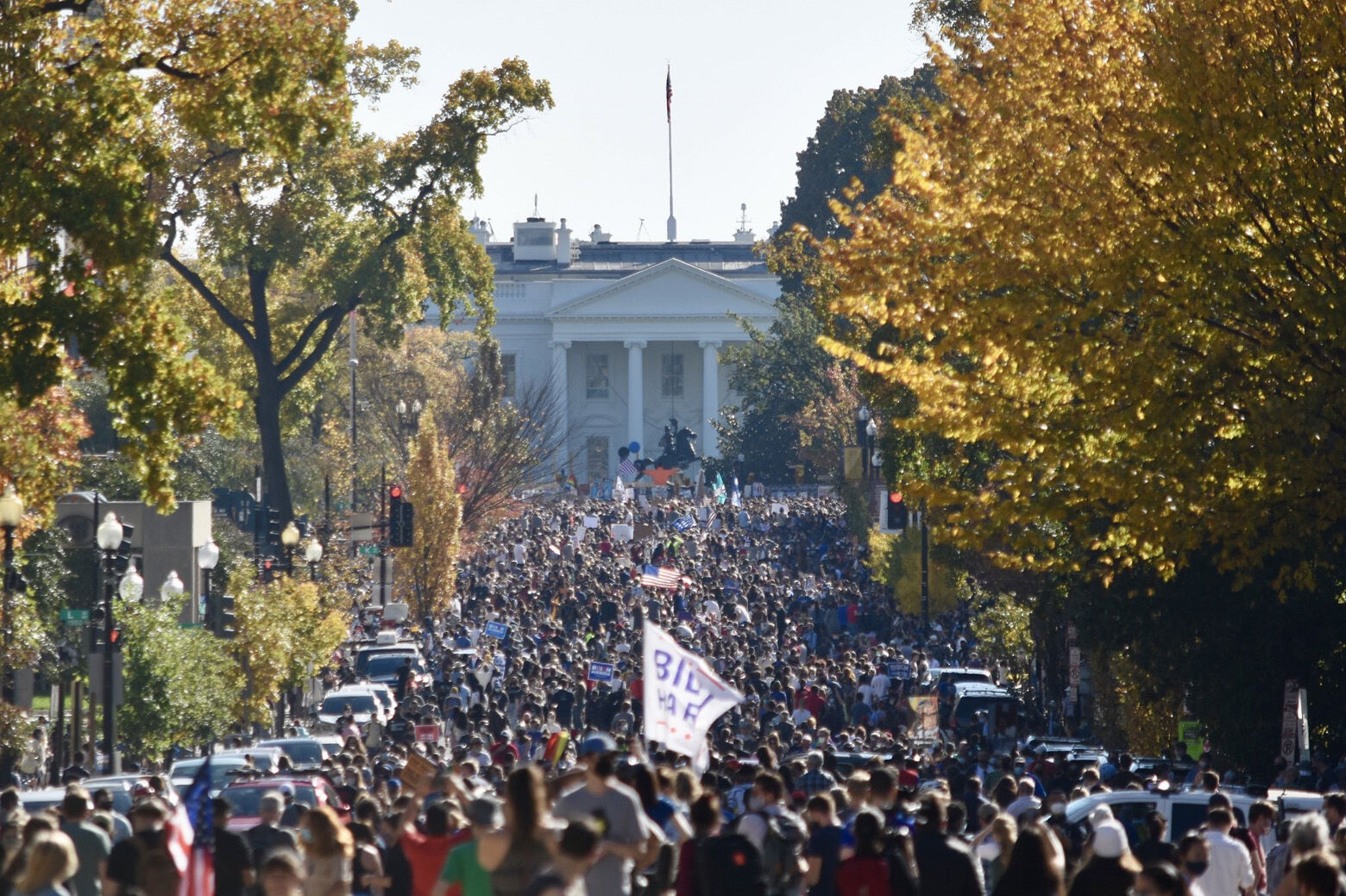 6/7
Crowds flock outside the White House on Saturday, Nov. 7, 2020, as they celebrate word that Joe Biden would become the 46th U.S. president. (WTOP/Dave Dildine)

Just about every presidential election could be classified as historic, but this year was a little extra unprecedented.

Of course the political stakes were high: The election year began with an unsuccessful impeachment attempt against President Donald Trump by congressional Democrats.

But by the time Election Day rolled around, another big story had overtaken the headlines: the raging coronavirus pandemic.

The presidential race was a roller coaster — the conventions were held virtually because of the coronavirus pandemic, the first debate was a train wreck and then came President Trump’s own coronavirus diagnosis.

With the coronavirus pandemic in mind, D.C.-area election officials — and their counterparts across the country — had to work overtime to keep polling places from turning into super-spreader events and the result was: an election like no other.

In the D.C. area, Virginia loosened rules for early voting and saw sky-high turnout from the first day.

In Maryland and D.C., election officials encouraged voting by mail, sending ballots or applications to all registered voters and installing hundreds of massive steel ballot drop-off boxes around the region to store completed ballots.

In the end, it took a while to count all those absentee ballots — especially in the key battleground states — but when the results were finally in and The Associated Press and other news networks called the election for Democratic challenger Joe Biden, residents of the District were ready to celebrate.

Scenes of jubilation — including more than a few Champagne corks popping — were seen across the city, including on Black Lives Matter Plaza, which had previously been the site of sometimes tense protests over the summer. 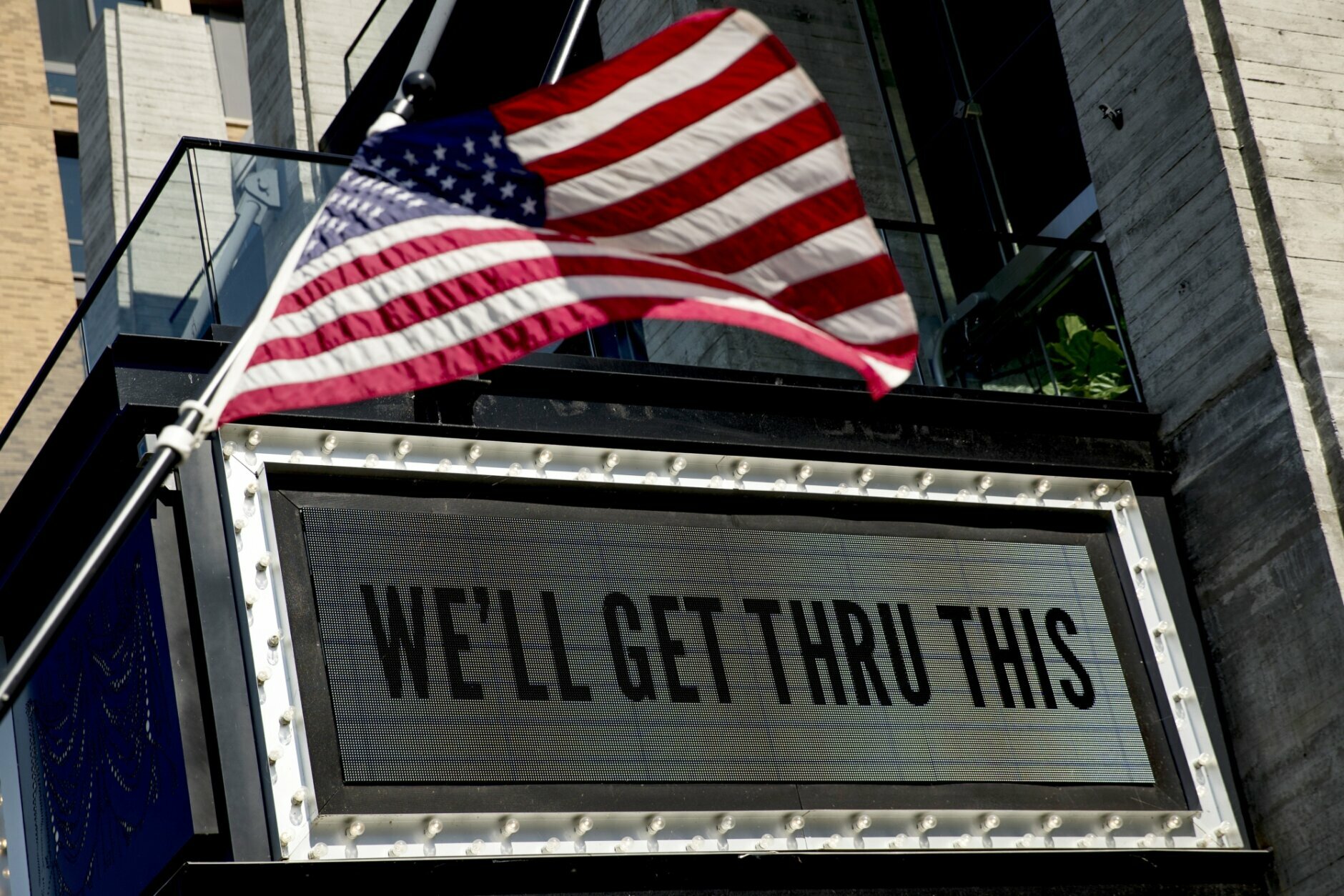 7/7
In this April 6, 2020 photo, a sign at The Anthem music venue reads “We’ll Get Thru This” at The Wharf, which is almost completely empty because of the coronavirus outbreak in D.C. (AP Photo/Andrew Harnik)

Other big news of the year