The cleanup continues in the aftermath of several tornadoes and storms that rattled the D.C. area Friday morning, capping off more than two days of heavy rain.

The National Weather Service announced Friday night that tornadoes touched down in the D.C. area earlier in the day.

The tornadoes were part of a stormy, cold and windy Friday that featured multiple tornado and high wind warnings. The winds downed trees, knocked out power and caused severe damage throughout the region.

Severe wind and tree damage was reported in Leesburg, Virginia, on Friday, according to Storm Team4 meteorologist Matt Ritter. There was also damage in western Montgomery County, Maryland, after rain and winds passed through.

“We have seen a fair amount of damage across the area,” National Weather Service meteorologist Kyle Pallozzi said.

Pallozzi said that trees and wires blocked several roads in northeastern Loudoun County, including Leesburg, as well as in western Montgomery County. He added that this type of storm during the winter in the area is not very common.

“We can get tornadoes in February, but also it’s not the most typical thing,” Pallozzi said. 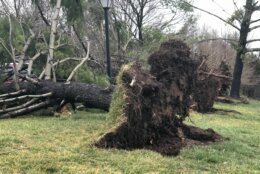 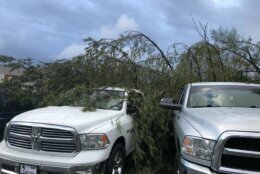 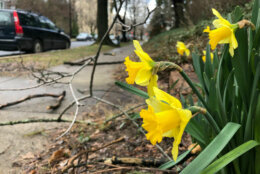 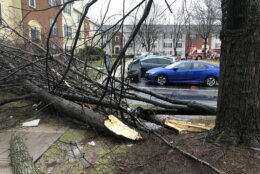 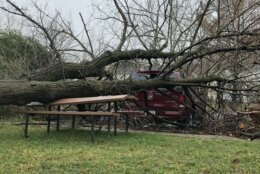 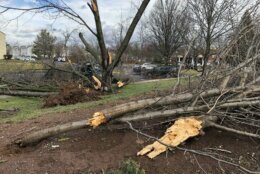 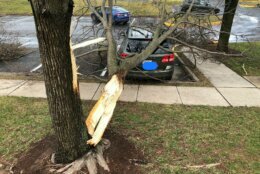 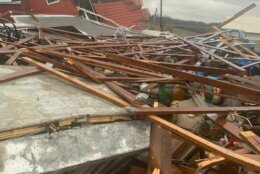 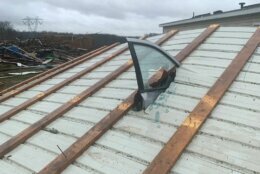 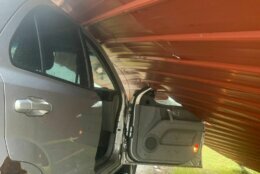 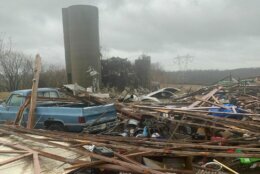 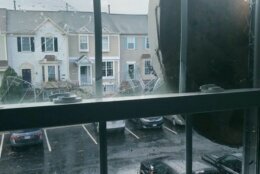 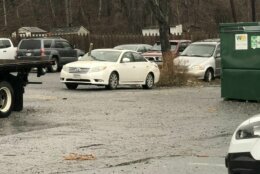 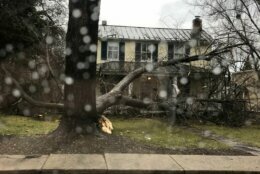 Storm Team4 meteorologist Chuck Bell noted that Feb. 7 was the earliest ever tornado warning for the D.C.-Baltimore area.

Kristi Rich, who lives in the area of Fieldstone Drive in Leesburg, said that she had just left the house when the storm hit, but that her husband told her he witnessed a “wall of water” that came through the rows of town houses where they live.

“There’s a lot of debris, some downed trees and several homes had fencing damage,” Rich said. “One home in particular had the siding ripped off of the side of the home and you can see the attic.”

One Leesburg resident, who declined to give his name, said he opened his front door, and “the ruckus” he heard outside made him “go down the basement for the first time of my life because I thought something was happening.”

Robert Porter, of Ruppert Landscape, was on the scene working with local police and fire departments to help clear downed trees from both roadways and power lines.

“There was a tree split, but still standing, that was hanging toward a building. We had to take it down,” he said. “Now, we’re just trying to clear access in case any emergency vehicles have to come through.”

Porter said the storm reminded him of Hurricane Isabel in 2003.

Montgomery County Fire and EMS spokesman Pete Piringer said Germantown, Poolesville, Boyds and Dickerson in Maryland were hit the hardest with several roads closed due to debris, wires and trees in the road.

Route 109 between Interstate 270 and Frederick Road remained closed late Friday morning, after a branch crashed through the windshield of a car, just missing the driver, according to Piringer.

“Throughout all of this we have had a number of collisions, car crashes, large branches and trees falling on cars,” Piringer said. “It’s pretty significant damage.”

He said there were no injuries reported.

Officer Michael Drogin with Leesburg police said heavy rain and winds were not a great combination in the area, with trees down throughout the town. Crews have been dispatched. There were no reports of injuries so far.

The NWS says this an “an atypical event” for February.

Temperatures on Friday dropped into the 40s into the 30s, as winds increased — a stark contrast to earlier in the week when temperatures rose into the 60s.

The weekend will be cloudy but dry.

“Enjoy the dry weekend because rain chances return for Monday, Tuesday and Wednesday of next week,” Bell said.

Thousands in Northern Virginia and Maryland were without power on Friday.

In Fairfax County, some outages were due to a crash on Route 7 near South Walter Reed Drive involving downed wires.

Check out the power outage map below for details.

After the rain, comes the sun. It will be partly sunny on Saturday with some isolated sprinkles and flurries possible at night. On Sunday, it will be cloudy but dry.

Sunday: Mostly cloudy and seasonably chilly. Some afternoon sun, but highs only reach the mid 40s.

Monday: Cloudy and but warmer with rain. Highs in the low 50s.

DC in February: A mix of warm and cold spells