Drenching downpours Thursday in the D.C. area led to dramatic rescues of several dozen stranded drivers from submerged roadways. And in Montgomery County, a stretch of Colesville Road remains closed overnight. Here’s what you need to know.

Both directions of U.S. 29 between Md. 193 (University Boulevard) and Md. 650 (New Hampshire Avenue) is still closed due to flooding, the Maryland Department of Transportation State Highway Administration announced Thursday night.

“The road will remain closed until waters of the Northwest Branch Creek recede to allow for cleanup and further inspection. Motorists are urged to avoid the area and plan alternate routes,” the release said.

In Prince George’s County, crews rescued at least one stranded driver on Route 50 in Cheverly near the D.C.-Maryland line shortly after 4 p.m. One of the busiest roads in the D.C. area remained completely submerged under feet of water and impassable.

A number of cars appeared to be caught in the water, according to WTOP’s Dave Dildine, who was at the scene.

U.S. Route 50—one of the busiest roads in the D.C. metro area—remains flooded and completely impassable east of Kenilworth Avenue hours after the heaviest rains with water rescues ongoing #dcwx #dctraff pic.twitter.com/ssEAnvKOEL

“This is near the main stem of the Anacostia River, an area known for flooding, but I’ve never seen Route 50 this much submerged and with this many vehicles stalled out,” Dildine said.

Crews launched an inflatable boat to rescue the driver, who had been using a cup to scoop water from her lap as she waited for rescuers.

Prince George’s County fire rescue boat teams also checked vehicle-to-vehicle by boat looking for anyone who might still be in their vehicles, Dildine reported.

The Prince George’s County Fire and EMS Department said crews were also responding to several cars in the water at Pennsy Drive and Old Landover Road.

Fire and EMS spokeswoman Jennifer Donelan said that in over 4.5 hours, the department got over 250 calls for service, and 134 of those where water-related. The exact number of how many people were rescued from their vehicles is not yet known at this time, but there was only one person that needed to be transported, Donelan said.

She said the department received water rescue resources from a number of neighboring areas, including Alexandria and Fairfax County in Virginia and Anne Arundel County in Maryland.

Jack Michaels was a passenger on one of trains from D.C. to New Carrollton, and he said the train was stuck for about two hours before it headed backward to D.C. a little after 5 p.m.

Flooding on the tracks led to delays on several other lines on the MARC. And trains 890 and 874 on the Brunswick Line are canceled Friday morning.  Find other service disruptions at the Maryland Transit Administration.

MARC Brunswick Line – Trains 890 and 874 cancelled Friday morning — Due to tonight’s service disruption on the Penn Line, there is no equipment available to operate Trains 890 (5:00am departure from Frederick) and 874 (5:25am dep… https://t.co/vfDNlXGeu7

Amtrak service to and from D.C. was stopped due to flood water on the tracks, leading to hourslong delays.

In Bethesda, Cedar Lane is blocked and Rock Creek had overflowed its banks.

Since the flash flood warning, which has expired, was issued for Montgomery County earlier Thursday afternoon, “it’s been nonstop since then,” Piringer said.

In the initial round of heavy rain, crews were called to Bethesda, along Bradley Boulevard and Little Falls Parkways and in Aspen Hill. Then the focus shifted to Kensington, Long Beach Drive and Rock Creek.

A video on Twitter showed serious flooding in Aspen Hill, Maryland, at Oriental and Bartlett.

One rescue happened at Dorset Avenue and Little Falls Parkway in Kenwood. Another video showed high water on Wisconsin Avenue in Chevy Chase.

In the District, D.C. Fire and EMS responded to a number of water rescues in Northwest and Northeast. The department tweeted a water rescue just before 2:30 p.m. at Mount Olivet Road Northeast. A video posted shows the area submerged in water.

D.C. Fire and EMS spokesman Vito Maggiolo said the department had responded to dozens of flooding-related calls and performed a number of water rescues in the past few hours, including near the Rhode Island Avenue-Brentwood Metro station where an underpass was flooded and a number of cars were submerged.

Emergency crews were checking each of the submerged vehicles to make sure they weren’t occupied, he said.

“I want to take this time to urge everybody, please turn around, don’t drown,” Maggiolo told WTOP. “At this point, it’s probably best just to remain at home because of the number of areas that are flooding and northwest and Northeast, and we don’t want anybody to place themselves in any danger.”

He said that the area around Rhode Island Avenue, the area around Kenilworth Avenue, Burroughs Avenue and Eastern Avenue in Northeast were particularly hard hit, but that roads were flooded out around the city. 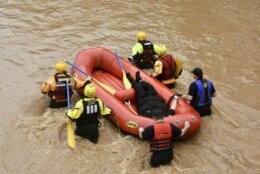 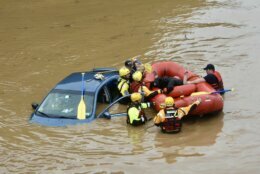 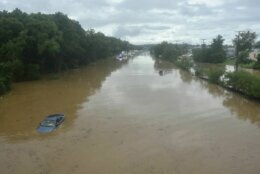 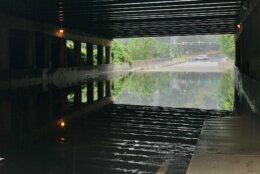 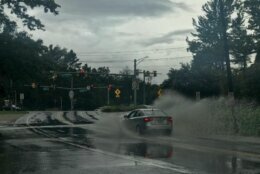 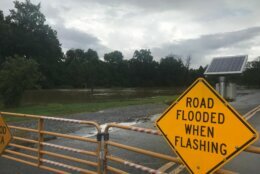 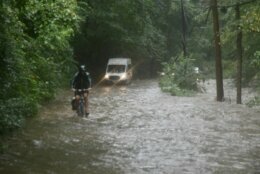 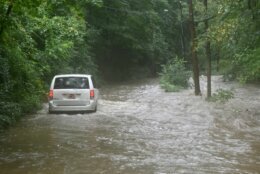 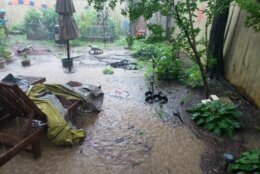 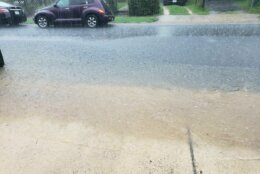 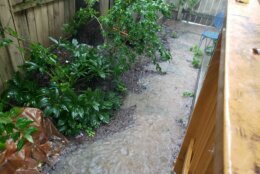 High water reported in the area

Storm Team 4 meteorologist Mike Stinneford said up to 5 inches of rain had already fallen across portions of the D.C. area by early afternoon.

Rock Creek was out of its banks through most of Rock Creek Park. D.C.-area creeks and streams rose rapidly as heavy downpours pelted the area.

There were reports that the Shaw-Howard Metro station in D.C. was experiencing flooding. D.C. Fire confirmed the flooding caused the third rail there to be submerged.

Storm team 4 meteorologist Chuck Bell said the big storm that dropped Denver’s temperature by over 60 degrees between Monday and Tuesday is responsible for the D.C. region’s weather turning so humid.

He cautioned that since the storm moves slowly, the cloudy and rainy pattern will stick around for a while. Cool, dry air from Canada will eventually push a cold front through Monday afternoon, which will bring sunshine and cooler than average weather for most of next week. 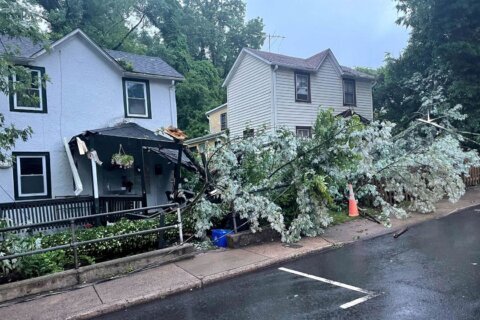 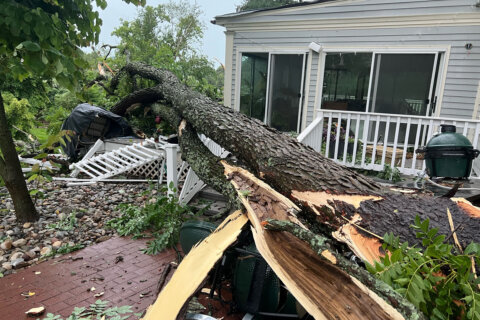