Protests spurred by the police-custody death of George Floyd in Minneapolis in late May continue for a fourth week in the District.
Listen now to WTOP News WTOP.com | Alexa | Google Home | WTOP App | 103.5 FM

Temperatures in the 90s on Saturday did not tamped down some of the energy rolling through streets and parks around D.C. in the last week.

After multiple contentious days of protests spurred by the police-custody death of George Floyd in Minneapolis in late May, protesters came out Saturday, in a different mood.

WTOP’s Alejandro Alvarez chronicled developments in the fifth weekend of protests in the District, which began Saturday morning with the Black Mamas March that began along Pennsylvania Avenue, near the Navy Memorial Plaza.

The events continue throughout the evening despite temperatures reaching the mid-90s. Different protest groups assembled between Pennsylvania Avenue and Black Lives Matter Plaza while a “No More Cops in our Community” march began at Dupont Circle.

Alvarez noted that the Black Mamas March was illustrated by the scene of women pushing strollers with one fist raised, as their children in the strollers also had their fist raised. The group walked a few blocks from their starting point to the National Mall.

Later on, the “No More Cops in our Community” protest began with 50 people in Dupont Circle shortly before 8 p.m. and marched east on Florida Avenue toward U Street, Alvarez reported. Protesters were not deterred by the earlier downpour that swept through parts of the region.

A banner at the front of the march read “Free the people. Fight the power,” as well as a criticism of the police that used an expletive.

Protesters were greeted by support from patrons at stores and restaurants along their route, just as the earlier march starting from Meridian Hill did.

Alvarez contextualized this group’s marching pattern by saying they have a tendency to take a long, zig-zagging route on their way to their destination.

For instance, Alvarez said that a march this same group held on Thursday followed a winding path when it went to the home of D.C. council member Charles Allen in the northeastern part of the District and past the U.S. Capitol.

That reputation seemed to be intact early into Saturday night’s demonstration, when the group took a left to get off Florida Ave. and moved up 18th Street in the direction of the Adams Morgan neighborhood.

Then the group grew to about 100 protesters when they entered the Target in Columbia Heights and held a short rally, according to Alvarez.

Alvarez emphasized that the rally was peaceful and no looting took place.

Their next stop is the Target in Columbia Heights, rushing up the escalators and holding a brief rally in the store’s entrance where they called on the company to “stop calling the police on black and brown people” vowing a boycott if they don’t. pic.twitter.com/goMyfHN3LL

After 9 p.m. the march found itself far up in northwest D.C., covering a wide range of areas.

Alvarez, who has years of experience covering protest movements in the District, said the sprawling nature of the protests is a first for him and suggested it may be intentional.

“The focus is very much on taking the message straight to the homes, the neighborhoods of D.C. council members,” Alvarez reported, who the marchers are trying to pitch their idea of defunding the police to.

Around 9:15 p.m. were heading toward Georgia Avenue well past Columbia Heights to the row homes in northwest D.C., heading past Allison Street, before continuing north on 14 St. around 9:30 p.m. to a purely residential part of the District.

After four hours of marching, the protest arrived at its final destination at Black Lives Matter Plaza. Some stayed and began taunting police that were standing behind a barricade.

The few people staying into the late night are chatting, smoking or taunting police at the barricades around St. John’s. An officer is filming them with a cheap camcorder. pic.twitter.com/97YEdGN7NY

Meanwhile, St. John’s Episcopal Church remains the current focal point for the Metropolitan Police Department, or D.C. police, on a day where interactions with protesters were sparse.

Alvarez said that a “constant and visible police presence” guarded the church around the clock, which is also protected by a concrete barrier and metal fencing similar to the one wrapping around Lafayette Square.

“Seemingly after the incident with the graffiti on the face of the church on Monday, there has suddenly been a vast surge in the interest of law enforcement to protect that building at all costs,” Alvarez reported.

Alvarez pointed out that this comes weeks after the May 31 arson attempt at St John’s when a small fire set in the church’s basement before D.C. Fire and EMS extinguished it.

There was no law enforcement presence by St. John’s in weeks that followed, according to Alvarez, who said protesters set up barbecues right outside the church and even puts signs on the structure earlier in the month. Now, Alvarez said, you can’t stand anywhere near it.

It’s a contrast with the former epicenter of clashes between police and protesters in Lafayette Square right across the intersection of 16th and H Street from St. John’s.

There is no longer a riot line and the police presence is closer in proximity to the White House with spotlights illuminating the intersection at night.

During another rally at around 4 p.m., Alvarez reported that roughly 100 people had gathered in Meridian Hill Park to begin a march down 14th Street in the direction of Freedom Plaza.

Labeled as a “theater march” by Alvarez, the smaller demonstration, often organized over social media, tends to march throughout the city and feed into a larger gathering somewhere else in downtown D.C.

The march began at the intersection of 15th Street and U Street, before Alvarez said they headed east on U St., chanting “Black Lives Matter” and “I can’t breathe.”

Unlike other marches that have weaved through the District, Alvarez reported there were no police  out in front or trailing the protesters to close and open traffic and make way for the demonstrations.

Protesters were walking between cars on their march, which had stopped to allow them to pass, according to Alvarez. Three protesters stood in the middle of U St. and guided traffic around the march.

Organizers announced briefly at the beginning of this march they were going to go to Freedom Plaza and would decide where to go from there, according to Alvarez.

“Now it goes to show you that these 100 or so people are marching with no clear knowledge of where they’re going to end up [or] what part of the city they’re going to be in, and they don’t mind” Alvarez reported.

Passersby on the street, people dining outside and cars stopped by the march would occasionally show their support by clapping for the protesters or raising their fist.

Alvarez said that the march’s brisk space took demonstrators to Logan Circle shortly after 4:30 p.m., where they took a short break among picnickers there.

A women used a megaphone to tearfully read off the names of black women and black transgender women who were killed or harmed at the hands of police officers or in police custody during the break, according to Alvarez.

As protesters left Logan Circle around 4:45 p.m., they cheered on by those relaxing at the circle, according to Alvarez.

The Meridian Hill march concluded by 5:15 p.m. outside of the John A. Wilson building in Freedom Plaza, Alvarez reported.

The organizers generally encouraged people to keep participating in future demonstrations, and ask “the community” for help if they ever get into altercations with the police, especially ones with chemical irritants involved.

At the fencing that has been recently re-installed around Lafayette Square after protesters attempted to take down the statue of Andrew Jackson earlier this week, Alvarez said new posters and banners have been attached.

One, he said, stated: “Vote out Racism,” with a caricature of President Donald Trump. Another one read: “Tell D.C. Council, ‘fund school foods, de-fund cops.'” Next to that sign, he said, are dozens of images of Black men and women who have been victims of police use of force.

In addition to the signs, after a contentious week in Black Lives Matter Plaza, Alvarez noted that ice cream trucks are back selling cool treats on a muggy day. They were not there earlier in the week when police used a show of force, smoke canisters and pepper spray to disperse the crowds agitating to take down the Jackson statue.

Alvarez, in a report, called the trucks: “the ultimate sign of de-escalation.”

The whole day’s events were a striking contrast to nearly one month ago when, after a mostly peaceful first night of protests and walks throughout the District on May 29, protesters clashed with secret service and U.S. Park Police along Pennsylvania Avenue near the Eisenhower Executive Office Building on May 30.

The scene around Lafayette Square became even more charged, and violent, on the night of May 31, prompting the District to institute curfews starting with the night of June 1.

That evening, just before the curfew, the U.S. Park Police, Secret Service and other agencies used chemicals and smoke canisters to clear the north side of Lafayette Square, close to St. John’s Episcopal Church, just ahead of President Donald Trump’s walk, bible in hand, to the church.

A contentious few days followed, but later that week, city workers from the District painted a massive Black Lives Matter stencil along 16th Street NW at the intersection with H Street NW. Mayor Muriel Bowser renamed the intersection Black Lives Matter Plaza, and it became the hub for weeks of mainly peaceful protests calling attention to the treatment of African-Americans by police in the United States.

Last Friday, after a peaceful day of Juneteenth celebrations, protesters pulled down and burned a statue of Albert Pike, a Confederate brigadier general, in Judiciary Square.

Then, Monday night, protesters set their sights on a statue near the White House honoring former President Andrew Jackson — who was a slaveholder and oversaw the forcible removal of Native Americans from the South — and the Emancipation Memorial in Lincoln Park.

The protesters attempted to pull down the statue to Jackson with ropes and chains, but were repelled by law enforcement using crowd dispersal tactics.

President Donald Trump, who chose to hang Jackson’s portrait in the Oval Office, tweeted a wanted poster featuring multiple suspects believed to be involved in the attempt to topple the statue with the threat of up to 10 years in prison for those found guilty of vandalizing monuments.

MANY people in custody, with many others being sought for Vandalization of Federal Property in Lafayette Park. 10 year prison sentences! @FBIWFO pic.twitter.com/mrLyxbWNvq

The order calls on the attorney general to prosecute any person or group that destroys or vandalizes a monument, memorial or statue to the fullest extent of the law. Federal law authorizes a penalty of up to 10 years in prison for the “willful injury” of federal property.

Four men have been charged for allegedly trying to tear down the Andrew Jackson statue.

Heavy fencing and barricades have been erected around the statues in D.C. Unarmed National Guardsmen were also sent to provide extra security for the monuments this week.

In recent days, however, the protests and attention have moved east of the Capitol Building, into the Capitol Hill neighborhood’s Lincoln Park, which features a prominent statue of Abraham Lincoln emancipating a slave. 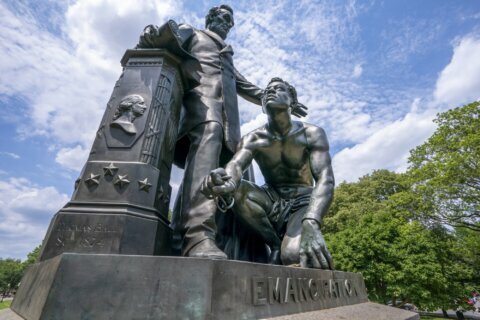 After week of clashes over DC statues, protests continue into weekend