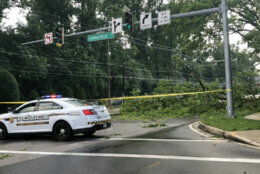 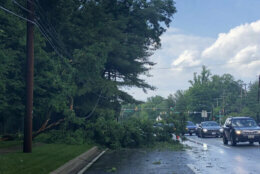 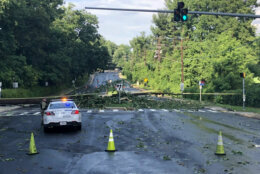 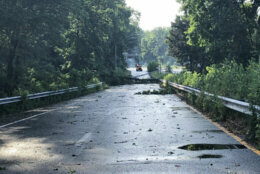 A short but severe burst of thunderstorms descended on the D.C. region Saturday, leaving downed trees, clogged roadways and at least one damaged home.

Prinzivalli said there were seven downed trees throughout the District.

The flash flood warning was canceled around 6:30 p.m., but the Sligo Creek in Tacoma Park rapidly rose above the flood stage of 5.5 feet just after 6 p.m., according to Prinzivalli.

Prinzivalli also said there were reports of trees down in Bethesda, including one on a house, with wind damage reported as far as Gaithersburg.

That wider reach of the storms seemed to be a theme, with some Annapolis residents getting hit hard by the storms as well.

Get the latest from WTOP’s Weather Center.