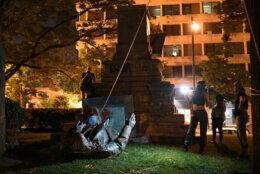 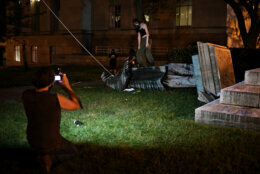 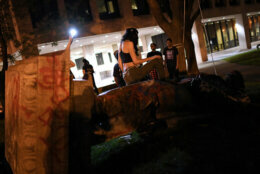 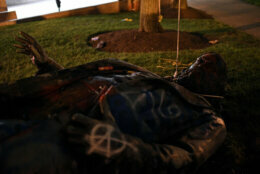 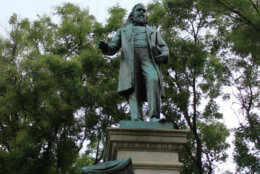 WTOP’s Ken Duffy reported that protesters arrived to the monument’s location, near the corner of 3rd Street and D Street, and began tearing down the statue after 10 p.m.

Cheering demonstrators jumped up and down as the 11-foot statue of Albert Pike wobbled on its high granite pedestal before falling backward, landing in a pile of dust.

Protesters then set a bonfire and stood around it in a circle as the statue burned, chanting, “No justice, no peace!” and “No racist police!”

Video shot by WTOP news partner NBC Washington showed demonstrators using rope to drag the statue off its base to the ground. Lighter fluid was then used to set the statue on fire.

D.C. Police, whose headquarters are located on the same block of the statue, put the flames out but did not engage with protesters.

After the statue was toppled, President Donald Trump tweeted that D.C. Police should have stopped the protesters from removing the statue.

The D.C. Police are not doing their job as they watch a statue be ripped down & burn. These people should be immediately arrested. A disgrace to our Country! @MayorBowser

Jubilant protesters read out Trump’s tweet over a bullhorn and cheered. After the statue fell, most protesters returned peacefully to Lafayette Square near the White House.

The statue, erected by sculptor Gaetano Trentanove in 1901 to honor Pike, had been a source of controversy over the years.

The former Confederate general was also a longtime influential leader of the Freemasons, who revere Pike and who paid for the statue.

The Masons had successfully lobbied Congress to grant them land for the statue — as long as Pike would be depicted in civilian, not military, clothing.

Pike’s body is interred at the D.C. headquarters of the Scottish Rite of Freemasonry, which also contains a small museum in his honor.

In 2017, D.C. Councilman David Grosso and seven other District elected officials asked the National Park Serve to remove the statue.

Ever since 1992, members of the DC Council have been calling on the federal gov’t to remove the statue of Confederate Albert Pike (a federal memorial on federal land). We unanimously renewed our call to Congress to remove it in 2017https://t.co/ggk8w2EypYhttps://t.co/f53tAH2pot pic.twitter.com/4u28HvH4cu

A proposed resolution calling for the removal of the statue referred to Pike as a “chief founder of the post-Civil War Ku Klux Klan.”

The Klan connection is a frequent accusation from Pike’s critics and one which the Masons dispute.