A third night of protests in D.C. over the death of George Floyd culminated early Monday morning with some business windows being smashed, a fire in the lobby of the AFL-CIO building and another fire at St. Paul Episcopal Church.
Listen now to WTOP News WTOP.com | Alexa | Google Home | WTOP App | 103.5 FM
(1/7) 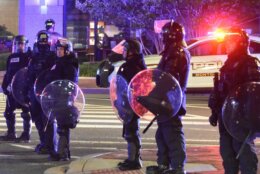 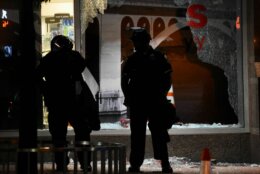 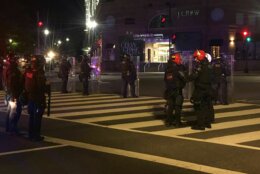 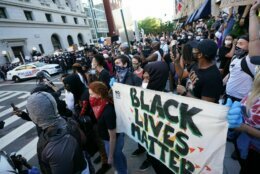 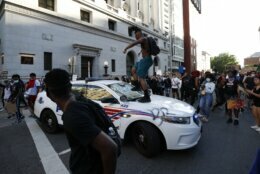 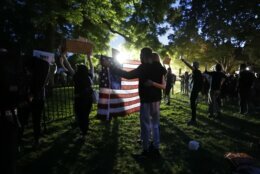 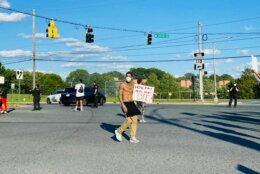 A third night of protests in D.C. over the death of George Floyd culminated early Monday morning with some business windows being smashed, a fire in the lobby of the AFL-CIO building and another fire at St. John’s Episcopal Church.

In response to the protests, D.C. Mayor Muriel Bowser ordered a citywide curfew that started at 11 p.m. Sunday and ended at 6 a.m. Monday.

Monday marks a week since the death of Floyd, a black man who pleaded for air as an officer pressed a knee into his neck, the Associated Press reported.

The curfew was a change of mind for D.C.’s mayor. Earlier Sunday, Bowser had said she would not impose a curfew because she did not believe that the protesters engaging in violent behavior would abide by it.

However, as a result of the protests, U.S. Marshals personnel and DEA agents were deployed to assist police with security, Justice Department spokeswoman Kerri Kupec told NBC Washington.

Around the time curfew went into effect, a fire inside the AFL-CIO building on 16th Street and I Street Northwest was reported.

The AFL-CIO headquarters a block north of the White House has been ransacked. There’s a fire in the lobby, all the windows are smashed and I can hear sprinklers going off. DC Fire haven’t been able to come anywhere near this area. pic.twitter.com/kpw1Jqgfgt

D.C. police also said Sunday night they were responding to “multiple fires intentionally set” around the city, including one reported at St. John’s Episcopal Church on H Street NW.

Near the Farragut West Metro, fire alarms went off inside a bank as its door was forced open and its windows shattered.

At Wisconsin Avenue NW in Friendship Heights, Montgomery County police provided backup support to D.C. police responding to dozens of people who broke into shops at the Mazza Gallerie.

Wisconsin Avenue at Western Avenue on the Maryland side was shut down. Montgomery County police said a group of about 75 people were running around after breaking into shops but none had crossed the city line into Maryland.

A tense night followed a day of protests at several spots in D.C., which prompted Bowser to call in the D.C. National Guard to back up D.C. police earlier in dealing with potentially violent protests.

Protests at Lafayette Square, across the street from the White House, were at first “quite orderly but quite vocal,” WTOP’s Steve Dresner reported earlier Sunday.

As day turned into night, Dresner said police attempted to disperse protesters, and what appeared to be rubber pellets were fired at the crowd, causing them to run and clearing Lafayette Square for a bit.

At around 7:30 p.m., WTOP’s Alejandro Alvarez reported that someone broke the windshield of a D.C. police car, which led to “a volley of flashbangs and pepperballs” – a form of pepper spray that’s concentrated and directional – from the D.C. police.

The peace around the White House is broken. A DC police cruiser had its windshield bashed in, leading to a volley of flashbangs and pepperballs at H and 15th streets.

I didn’t catch it on camera but a protester managed to snatch a police baton to applause from the crowd. pic.twitter.com/7k3fEAdZUU

#NOW: Hundreds are packing into H Street north of the White House for a third consecutive evening of protests over the death of George Floyd.

Turnout is high even after yesterday’s clashes. It’s wholly peaceful at the moment, they’ve taken a knee chanting “stop killing us.” pic.twitter.com/2RiHfTfLZi

#NOW: Hundreds are packing into H Street north of the White House for a third consecutive evening of protests over the death of George Floyd.

Turnout is high even after yesterday’s clashes. It’s wholly peaceful at the moment, they’ve taken a knee chanting “stop killing us.” pic.twitter.com/2RiHfTfLZi

In Virginia, Gov. Ralph Northam declared a state of emergency ahead of the clashes.

“The emergency declaration will provide the necessary support to localities as they work to keep our communities safe,” Northam said. “There are many voices speaking out for justice and healing across the United States and in our commonwealth, but others are exploiting the pain and inciting violence.”

The order, which is in effect until Wednesday, June 3, allows for the deployment of the Virginia National Guard to assist localities in de-escalating violent protests.

‘We certainly recognize … the outrage’

“We know of some planned demonstrations,” Newsham said in a news conference Sunday afternoon before the vandalism. “Our expectations are that people will peacefully assemble here in the city as they do 99% of the time, and we won’t have a repeat of the events of last night.”

“If they have images of anybody who destroyed property or hurt people in Washington, D.C., last night and into this morning, we ask them to share that with us,” Newsham said.

He said that they will have the police department’s criminal investigations division scouring the government cameras for anyone involved in criminal behavior during the protests.

“When we have those images we will share them with the public,” Newsham said. “We will ask our community of Washington, D.C., and of our region to help us identify those folks who came into our city with the intention of destroying property and hurting people.”

The protests were sparked by Floyd’s May 25 death, in Minneapolis after police officer Derek Chauvin, who has been charged with third-degree murder and manslaughter, pinned him to the ground with his knee on his neck for nearly 9 minutes.

“We certainly recognize and empathize with the outrage that people feel over the death of George Floyd,” Bowser said. “We are proud of our city. We do not want our city to be destroyed,” Bowser said.

D.C. police made 18 arrests Saturday night, and on Sunday evening they released the names of the suspects:

Charged with theft: Diawoo Kwadowo Kwadowo, 24, of no fixed address, and Kevon Jackson, 27, of Northeast D.C. (also charged with possession with intent to distribute).

Charged with felony destruction of property: Justin Paul, 20, of no fixed address.

Eleven D.C. police officers sustained non life-threatening injuries, with one officer hospitalized with a leg fracture after being hit by a brick north of Lafayette Square Park, Newsham said.

The chief said besides bricks, officers also had “incendiary devices” thrown at them.

“The behavior of our police was credibly responsible, heroic in many instances, and I think that I couldn’t have been more proud of the folks that were out there,” Newsham said.

A number of national monuments around the city were vandalized during the Saturday night protests, the National Parks Service confirmed.

In the wake of last night’s demonstrations, there are numerous instances of vandalism to sites around the National Mall. For generations the Mall has been our nation’s premier civic gathering space for non-violent demonstrations, and we ask individuals to carry on that tradition. pic.twitter.com/LmIHfW2AHj

Lt. Col. Jarad Phelps, deputy chief of the Prince William County Police Department, told an emergency meeting of the County Board of Supervisors that a curfew wasn’t needed on Sunday, telling the members that such a measure would only “add fuel to the fire,” even though more protests are said to be scheduled for the next two nights.

County police officers showed “tremendous restraint” in the face of hours of having rocks and bottles thrown at them, Phelps said.

Board member Margaret Angela Franklin said Phelps was “telling the truth” about the restraint of county officers and said the state police were the ones who used chemical agents and rubber bullets against people Saturday night, which she said “escalates a situation.”

Referring to the county police, she said, “Our guys did the best they could last night.”

Phelps refused to make the distinction, saying, “Anything that happened last night is on me.”

Protests began at about 5 p.m. Saturday around Sudley Road and Sudley Manor Drive, the police said in a statement. As the protest went on, demonstrators began to block Sudley Road, throw objects at cars and officers and stand atop cars and businesses in the area. At about 8:10 p.m., the police said, they declared the assembly unlawful.

For a time, Sudley Road was closed from the Interstate 66 interchange to Sudley Manor Drive. Two small fires were reported in shrubbery and a trash receptacle; several businesses and police cars were damaged and four officers were hurt, one requiring treatment at a hospital.

The assembly dispersed at 1 a.m., the police said. One person was charged with driving under the influence. Police said the driver drove through a police perimeter and nearly struck some officers. Others were charged with unlawful assembly and obstruction of justice.

The Virginia State Police added in its own statement that officers helped the county police in the incident, and that one trooper was struck in the helmet with a rock, suffering minor injuries. Another was struck in the leg. Troopers used pepper spray on some protesters, they said.