Top weather events of 2019 in DC and beyond

When it comes to weather, 2019 saw it all: From tornadoes and hurricanes to floods and wildfires, look back on the year’s top weather events in the D.C. region and beyond. 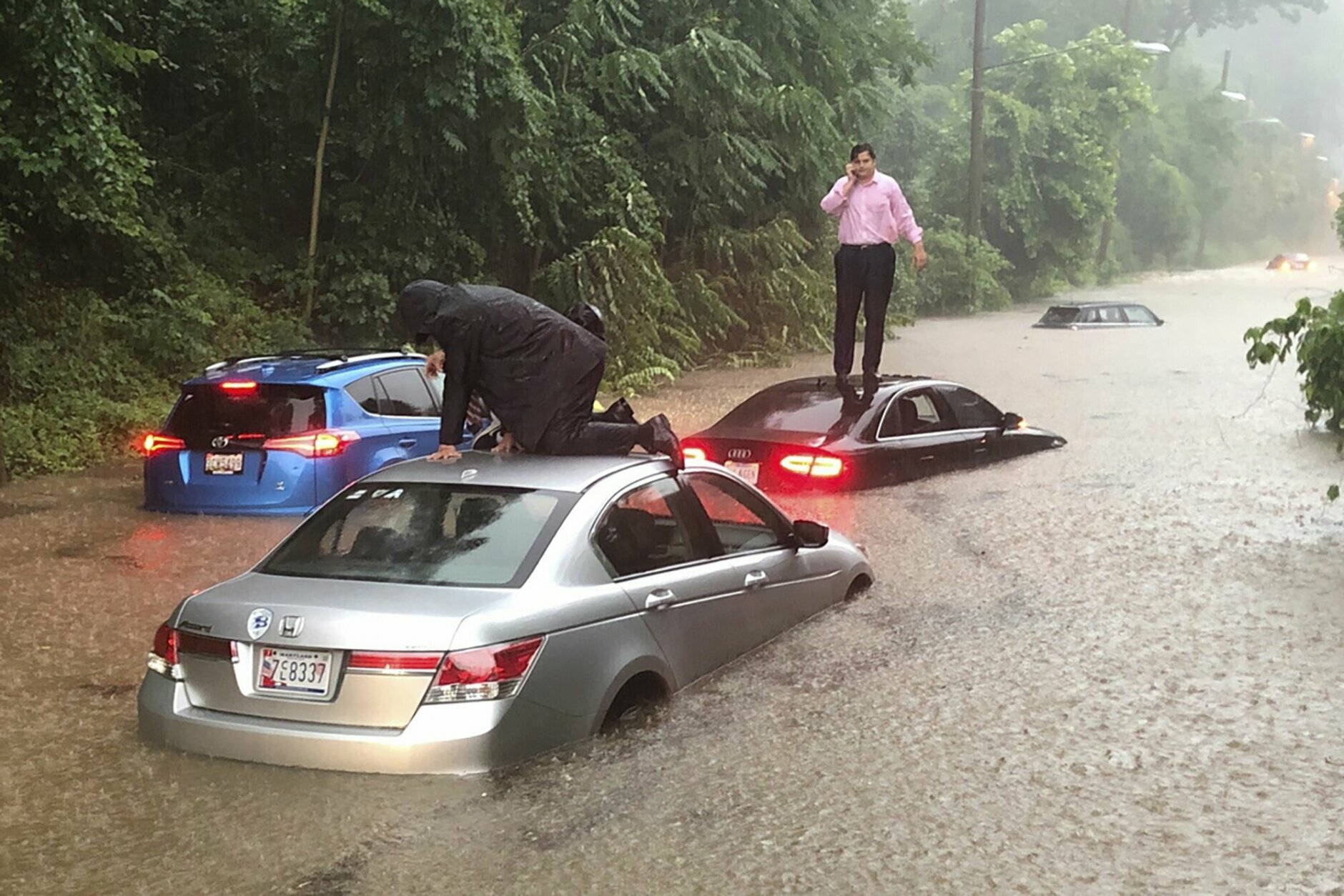 1/8
In a widely-circulated photo, floodwaters overwhelm motorists on Canal Road in Northwest D.C. during a rare flash flood emergency on July 8, 2019.

July 8, 2019, is a day that will live in infamy for the unlucky D.C. commuters who saw roads become raging rapids in a matter of minutes as a slow-moving storm front swept south through the region.

WTOP reporter and weather researcher Dave Dildine witnessed morning commuters on D.C.’s Canal Road scrambling to escape surging floodwaters from the swollen Potomac. In a photo for the ages, he captured drivers calling for help from the roofs of their submerged vehicles.

“It was a scene straight out of a disaster movie. At the height of morning rush hour, Canal Road — a busy commuter route — looked more like the C&O Canal,” Dildine later recounted. “I ran between vehicles, starting at the back of the queue, knocking on doors and telling each driver to turn around as quickly as possible.”

“IMMEDIATE ACTION IS REQUIRED TO SAVE YOUR LIFE,” the regional National Weather Service office alerted, as part of a flash flood emergency — a rare type of alert reserved for exceptionally severe flood events in urban areas.

Tornadoes aren’t strangers to the D.C. area, but it’s far from tornado alley — and in May, some residents of Howard County, Maryland, reeled from two separate twisters in the same month.

The first, confirmed by a National Weather Service analysis as an EF-1 tornado with wind speeds of up to 110 mph, touched down in Columbia on May 23, knocking power out for thousands.

The second came days later in the Glenelg area, carving a line of damage through Dayton. Power lines and trees were toppled over driveways, and residents reported seeing swirling winds amid sheets of rain.

“It was coming toward me,” Dayton resident Angela Butler told WTOP. “I actually saw something big swirling above, up high … I was scared to death. It’s the worst thing I’ve ever experienced.” 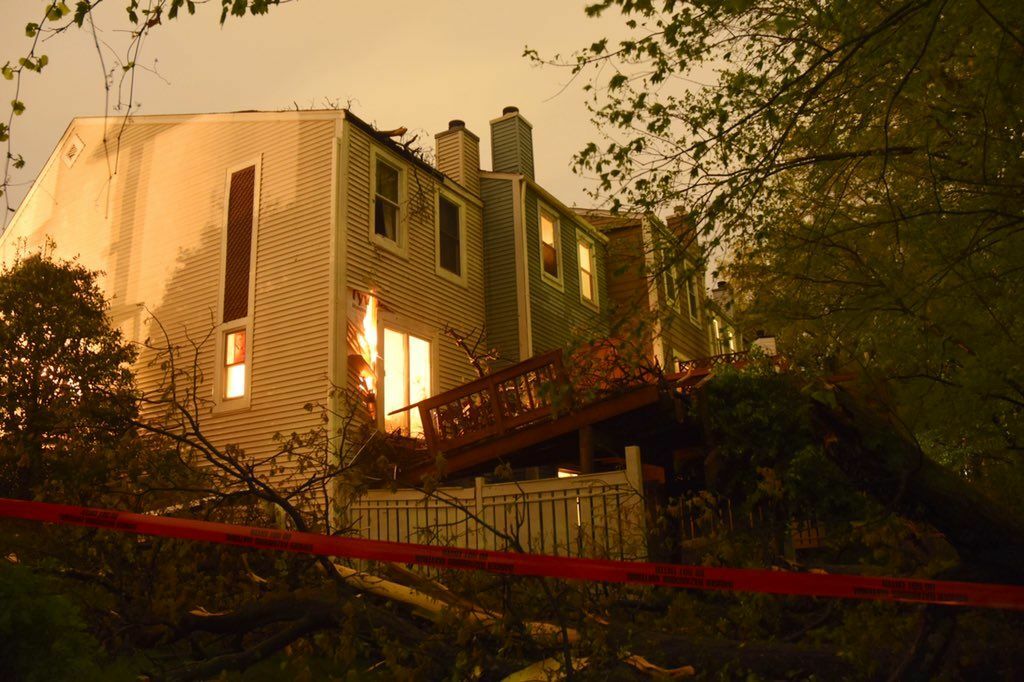 3/8
A townhouse behind the Hechinger shopping center is seen after a large tree fell into it on April 20, 2019, following a confirmed tornado that touched down near Reston, Virginia.

An EF-0 tornado might sound weak, but it’s still a force to be reckoned with — and a ferocious power that befell parts of Fairfax County, Virginia, on April 20.

The National Weather Service blamed a tornado for what it called a “discontinuous line of damage” stretching about four miles through the Reston area that evening. It boasted winds in excess of 70 mph.

The weather service received reports of ping pong ball- and golf ball-sized hail falling on a side swath from Rockville, Maryland, to Northwest D.C., and some parts of northeast Virginia, during a particularly strong summer thunderstorm on June 2.

It was the first time in almost three years that the nation’s capital had seen hail that large, according to WTOP’s Dave Dildine.

Traffic along Connecticut Avenue in D.C.’s Woodley Park and Cleveland Park neighborhoods briefly came to a halt amid the cacophony of cascading ice. Hail shredded leaves and flowers off plants, and left dents in some vehicles. 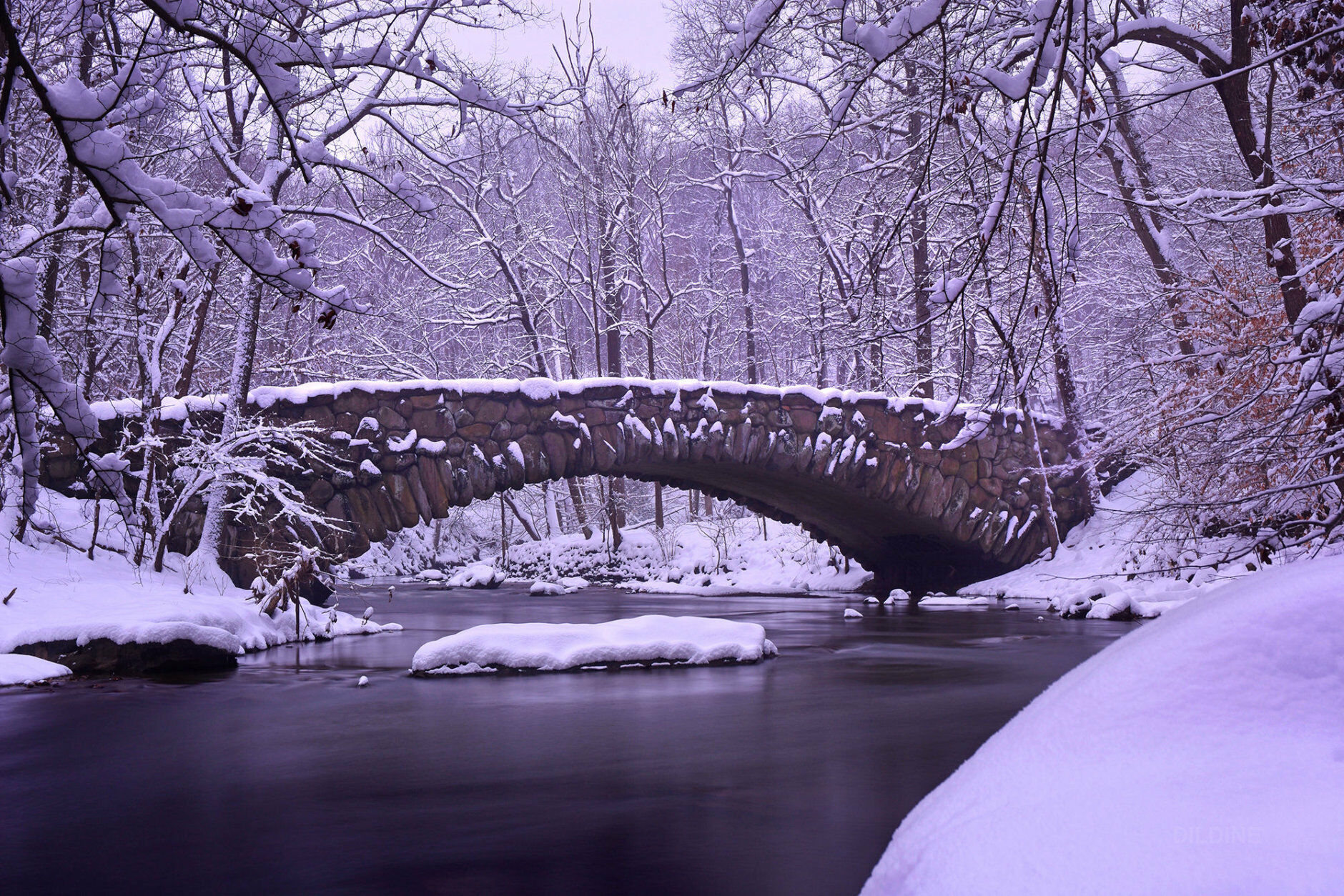 In a year mostly devoid of major winter storms compared to previous winters, 2019’s first snowfall turned out to be most of its significant. On Jan. 17, 4 to 8 inches of snow fell across most of the D.C. region, closing most of the area’s major school districts and the federal government. Traffic was, predictably, a mess.

A combination of ice and snow made for a particularly wintry scene, bringing eager photographers out to capture the beautiful, snowy night.

In Rock Creek Park, a young woman’s determination for a photo led to a daring rescue out of freezing waters by a stranger who happened to be at the right place at the right time. The twist? It involved one of WTOP’s very own. 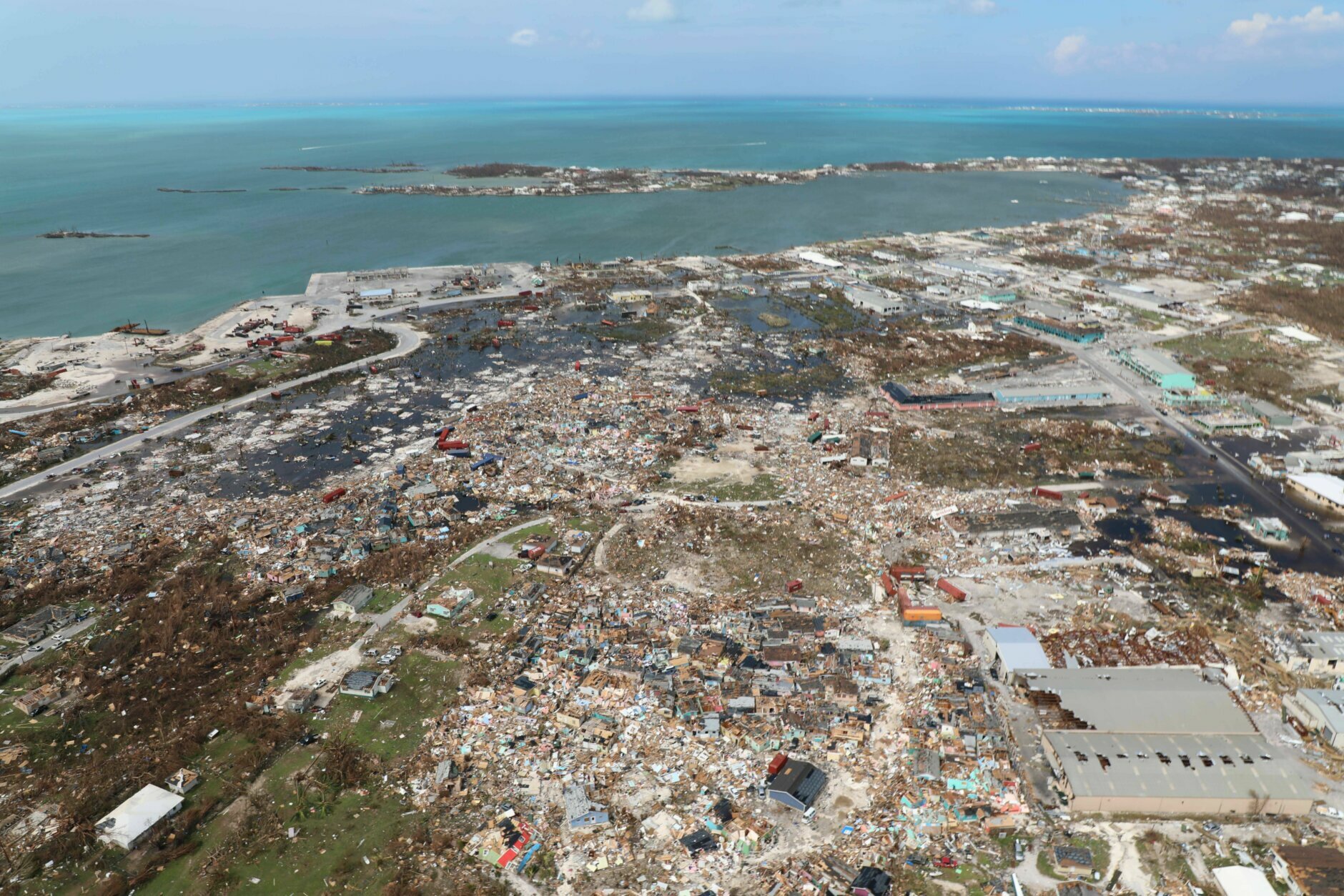 6/8
The destruction caused by Hurricane Dorian is seen from the air, in Marsh Harbor, Abaco Island, Bahamas, Wednesday, Sept. 4, 2019.

The U.S. East Coast dodged a meteorological bullet this summer. Others weren’t so lucky.

Thanks to Hurricane Dorian, the world now knows what sort of damage a Category 5 hurricane can inflict on an island if it parks itself over the same spot for days. The answer: Complete obliteration.

With seaside towns wiped off the map and hospitals destroyed, the world may never come to know the full extent of the damage Dorian inflicted, with maximum sustained winds of over 185 mph. It was the most powerful storm on record ever to hit the islands.

“It’s total devastation. It’s decimated. Apocalyptic,” Lia Head-Rigby, a local aid worker on Abaco Island, told The Associated Press. “It’s not rebuilding something that was there; we have to start again.”

While weakening from its own might stirring up cooler waters, Dorian’s potent core brushed by the Carolinas, and its heavy surf lashed coastal Virginia. 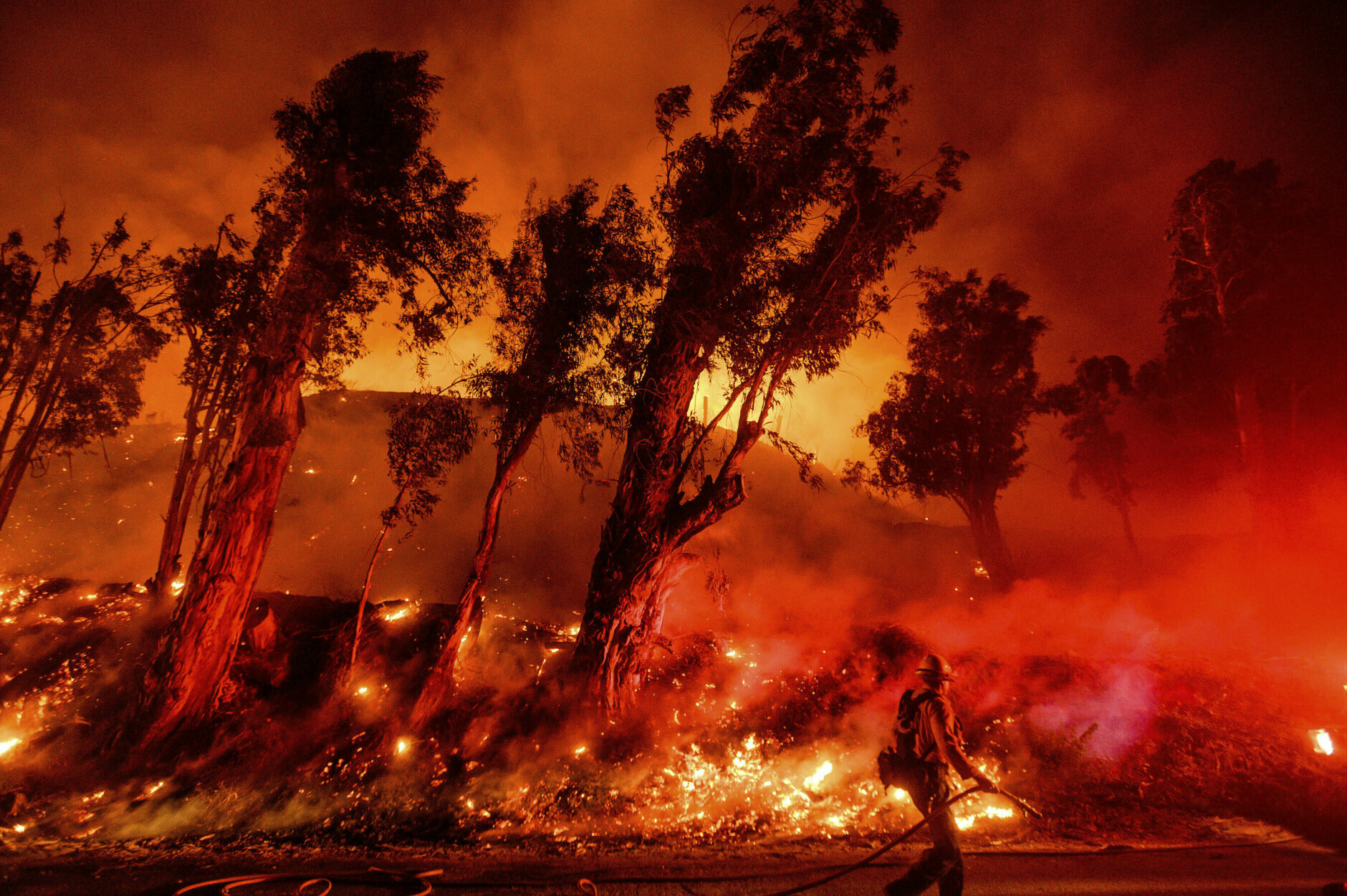 7/8
Flames from a backfire consume a hillside as firefighters battle the Maria Fire in Santa Paula, Calif., on Friday, Nov. 1, 2019.

It’s becoming a familiar scene for Californians: Images of firefighters dwarfed by flames taller than trees, beneath a blood-red sky pierced by planes coating entire neighborhoods with flame retardants. Evacuations are becoming routine.

Despite California power companies implementing blackouts to prevent power lines from sparking blazes, 2019 still proved to be one of the state’s most severe fire seasons on record. The Kincade Fire burned for over a week in late October, threatening more than 90,000 structures and becoming Sonoma County’s largest wildfire on record.

This year saw seasonal fire threats continue to worsen as climates grow hotter and drier across the globe. Just ask Australia, where one of the year’s gravest climate catastrophes will continue to unfold into the new year. 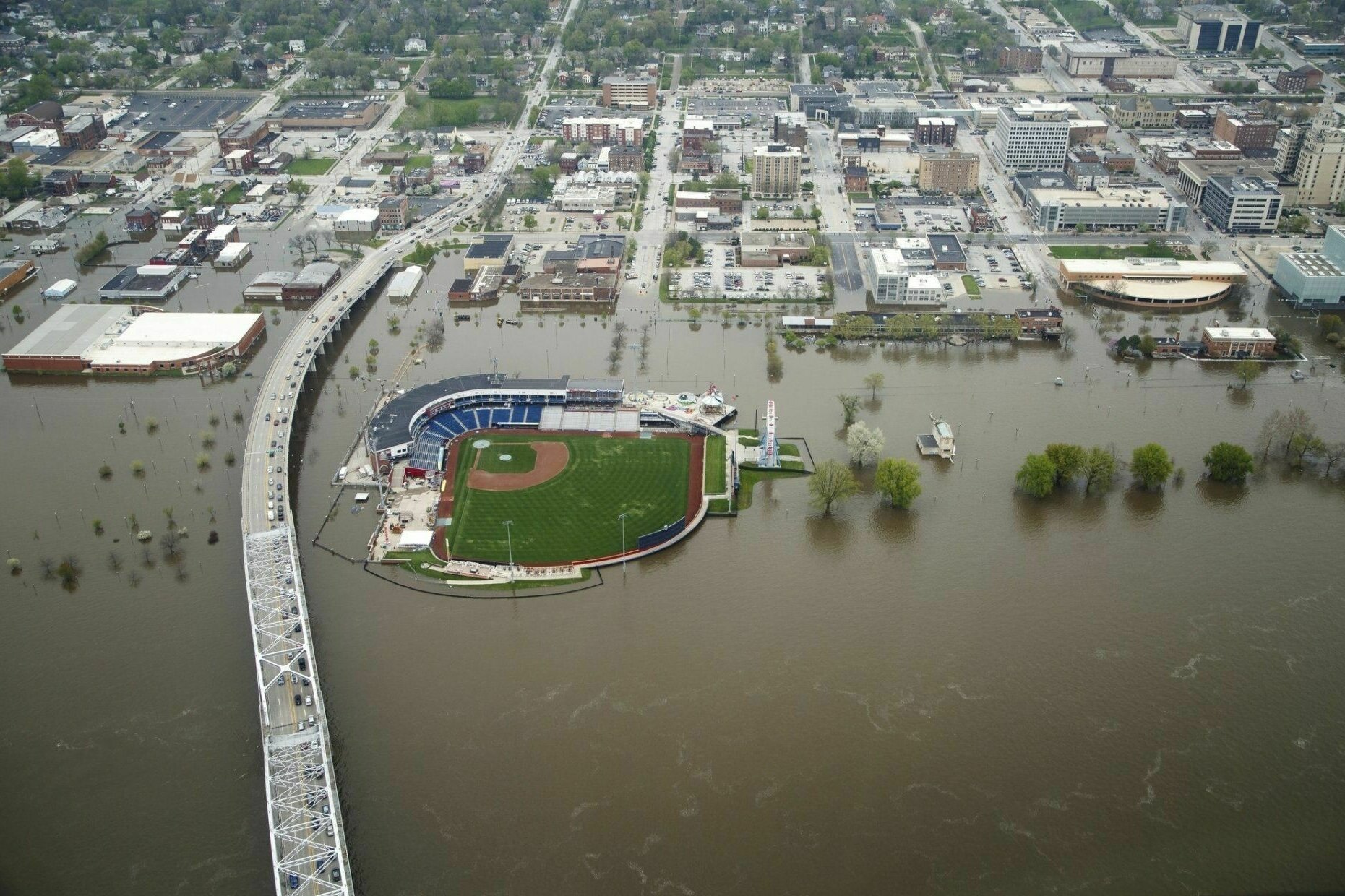 8/8
Downtown Davenport, Iowa, is seen from the air as flood waters flow on Wednesday, May 1, 2019. A flood wall broke, sending water to near record levels with little to no warning.

From an Alaskan heat wave to a Hawaiian winter storm, there was no shortage of unusual weather happenings across the country this year, which saw more than 120,000 daily records broken across the U.S., from temperatures to rain and snowfall.

Alaska broke 70 degrees in March, the first time that state has been that warm that early in the year since record-keeping began in the late-19th century. The remnants of tropical storms Imelda and Barry dumped over a foot of rain on the South — the latter of which became Arkansas’ wettest tropical cyclone on record.

Unprecedented flooding damaged hundreds of homes in Nebraska, Iowa and Missouri, as levees were breached along the Mississippi River. Waters in some areas rose to levels not seen since 1993. Damage was estimated at $3 billion. 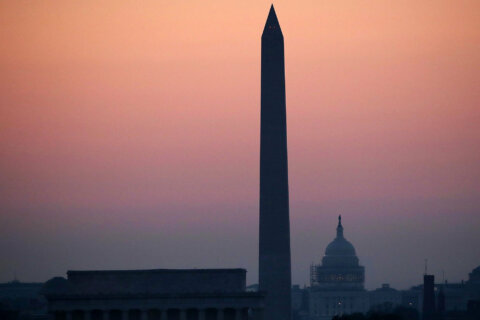 Relief in sight for the Southwest following a stretch of dangerous, record heat