A friend warned Angela Butler, of Dayton, Maryland, of a storm headed toward her area in Howard County on Thursday. Then, she looked out the window and saw the sheets of rain and swirling winds, prompting her to head toward her home’s basement.

“It was coming toward me,” Butler said, recounting Thursday’s confirmed tornado. “I actually saw something big swirling above, up high … I was scared to death. It’s the worst thing I’ve ever experienced.”

Though her home’s roof was damaged only slightly with a few shingles being blown away, Butler said she couldn’t see her driveway Friday morning. Power lines and trees were toppled over most of her driveway as well as her neighbor’s backyard.

On Friday, crews with the National Weather Service continue to determine the extent of the damage in Howard County and assess other areas that may have been impacted. In Baltimore County, the tornado caused a tree to fall onto a vehicle, critically injuring one person, according to The Baltimore Sun.

This is the second tornado in Howard County in a week. An EF-1 twister left damages to houses and uprooted trees last Thursday.

Meteorologist James Lee from the National Weather Service said that a tornado touched down around 1 mile southwest of the Glenelg area at 3:22 p.m. Thursday.

“We saw radar rotation signature as well as what we call a debris ball signature from our own radar here in Sterling, Virginia. And we went ahead and declared it a tornado. We’re not going to know the details until (Friday) morning when we actually get out there and start surveying and looking at the damage in person,” Lee said. 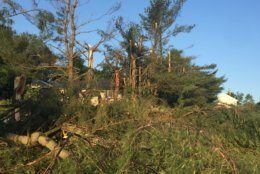 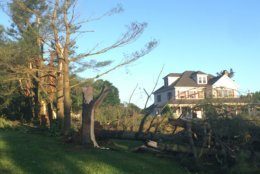 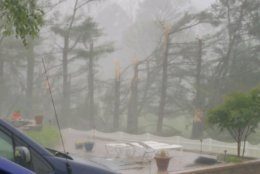 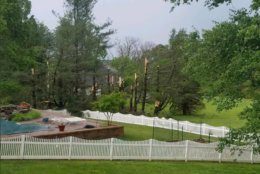 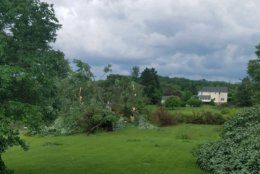 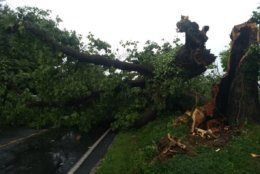 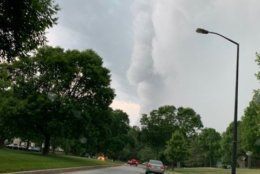 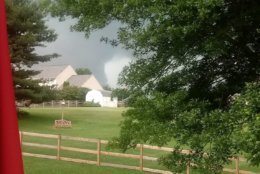 A wind gust of 71 mph was reported in Gainesville in Prince William County, Virginia. At Davison Army Airfield east of Lorton, winds gusted to 66 mph. A 52-mph wind gust was reported at Reagan National Airport, The Associated Press reported.

Heavy rain and strong wind gusts, as well as some hail barraged the area causing damage, power outages, downed trees and road closures in counties in both states.

The storms knocked out power in the area.

In Howard County, where 1,000 BGE customers are still without power as of 11:30 a.m., Folly Quarter Middle School, Crestwood Middle School and Clarksville Middle School are closed Friday due to the outages.

As of 9:30 a.m. Friday, 600 Dominion Energy customers in Northern Virginia are in the dark, mostly in Fairfax County. Dominion expects to have power restored by 7 p.m. Friday.
WTOP’s John Domen reported from Howard County, Maryland. WTOP’s Jack Pointer and Mike Murillo and The Associated Press contributed to this report.