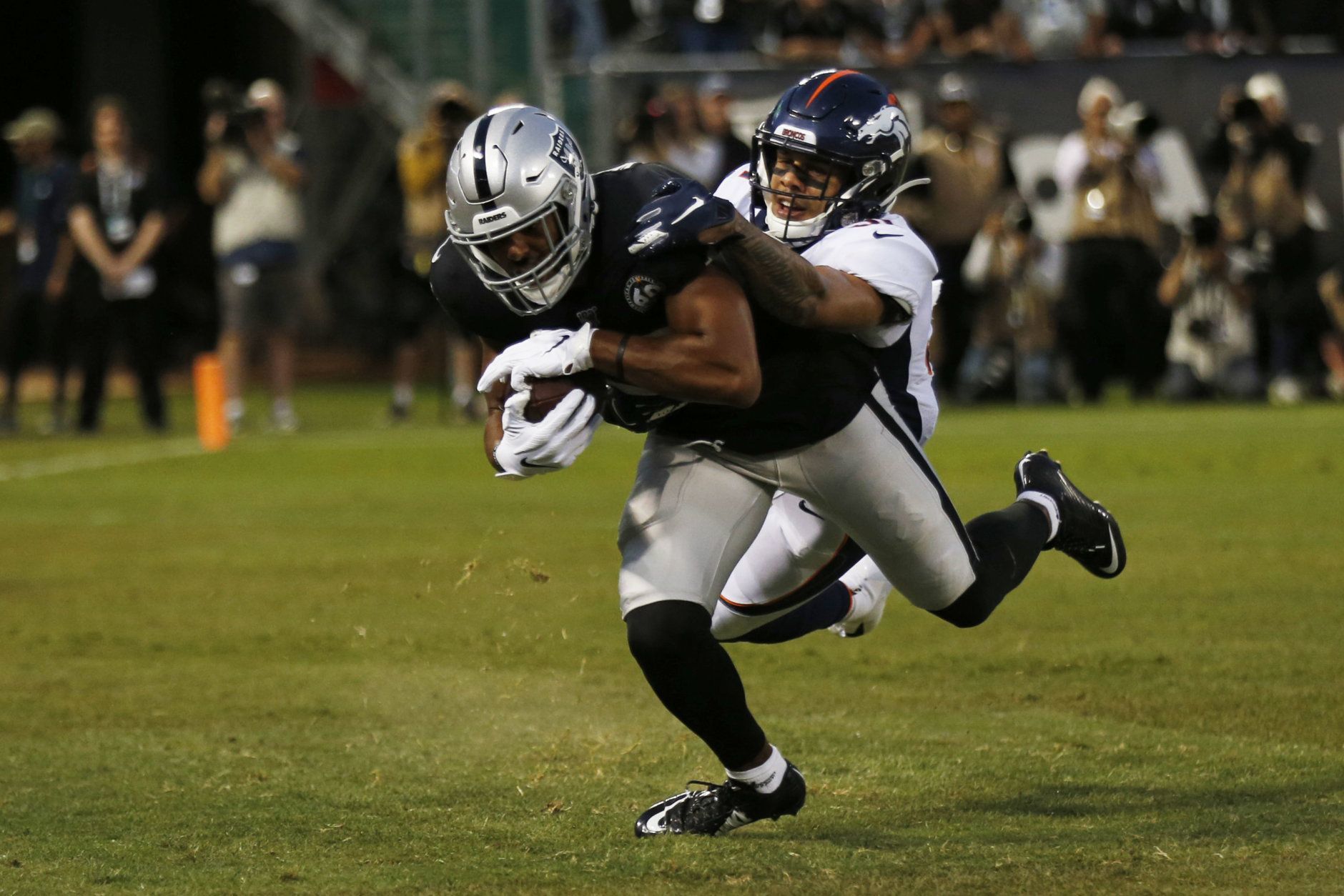 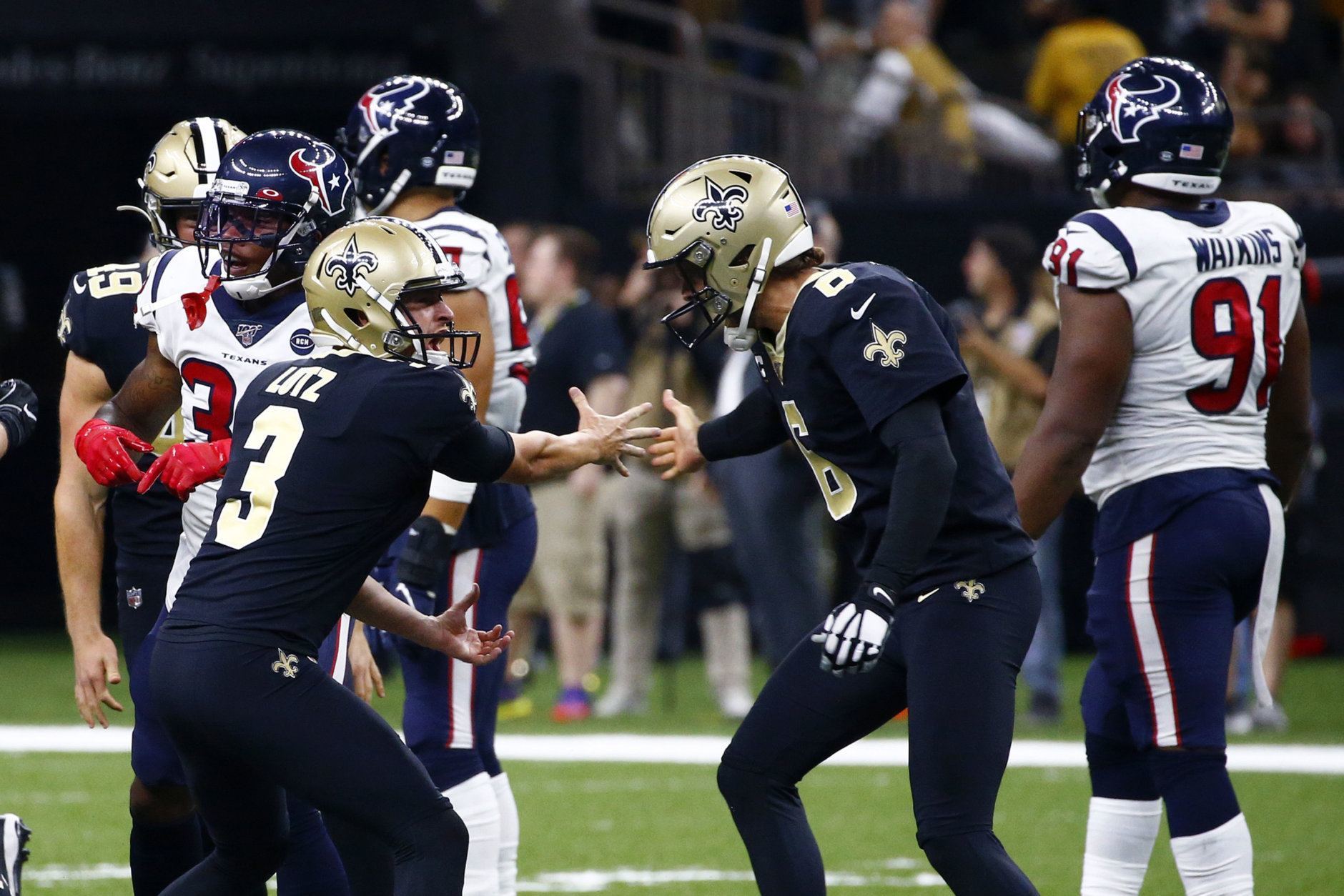 2/16
New Orleans Saints kicker Wil Lutz celebrates his game winning 58-yard field goal with holder Thomas Morstead (6) at the end of regulation in the second half of an NFL football game against the Houston Texans in New Orleans, Monday, Sept. 9, 2019. The Saints won 30-28. (AP/Butch Dill)

The back and forth between old school Drew Brees and new school Deshaun Watson. Former Saint Kenny Stills scoring the game tying touchdown in New Orleans and a roughing the kicker penalty that allowed redemption on a missed game-winning extra point. Will Lutz with a career-long 58-yard field goal to give the Saints their first season-opening win since 2013. Can we vote for this to be the Super Bowl? 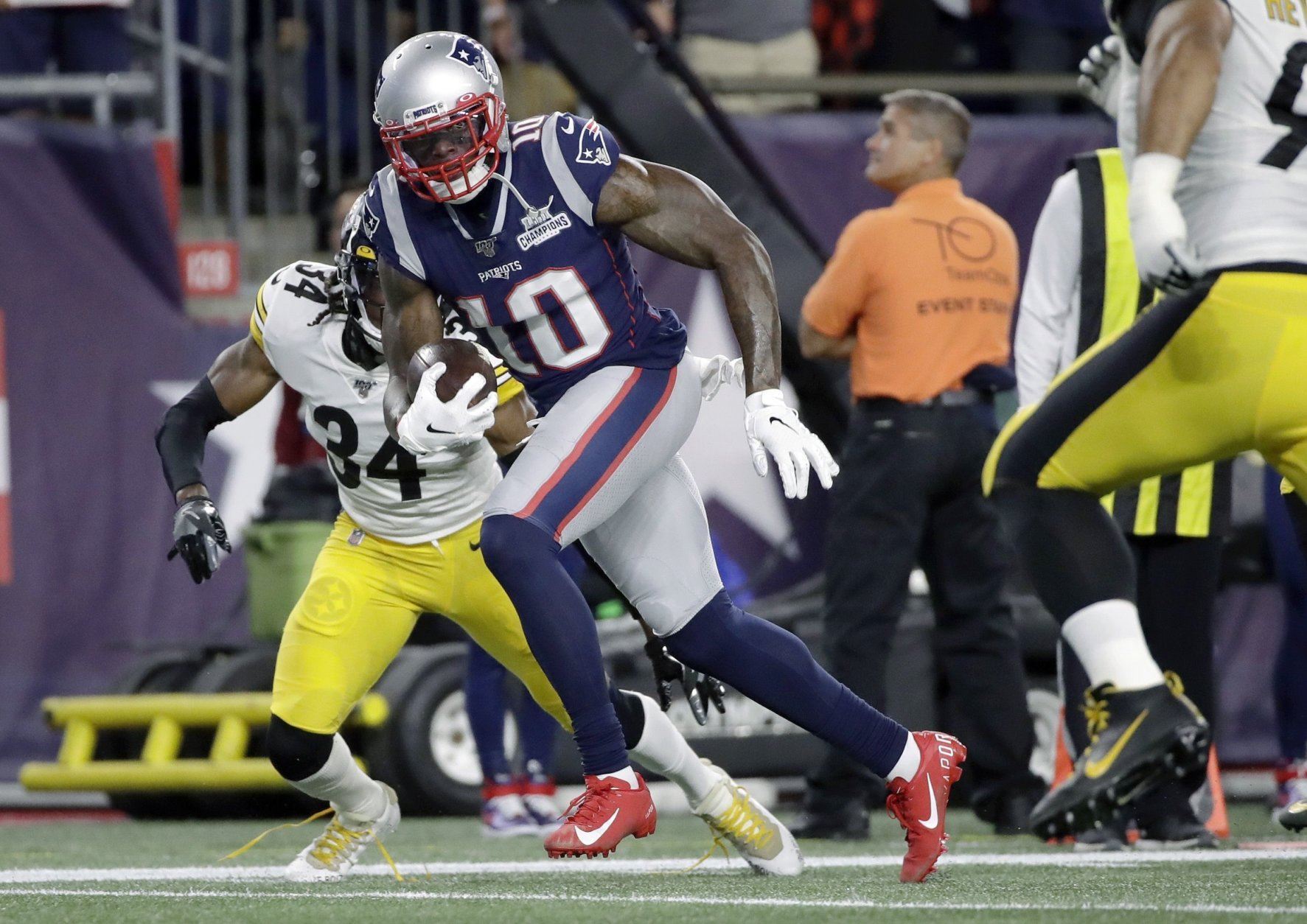 3/16
New England Patriots wide receiver Josh Gordon (10) runs for the goal line and a touchdown after catching a pass from Tom Brady in the first half of an NFL football game against the Pittsburgh Steelers, Sunday, Sept. 8, 2019, in Foxborough, Mass. (AP/Elise Amendola)

Pittsburgh is now 1-6 at Gillette Stadium, so while losing to the Patriots may have been a foregone conclusion, failing to score a touchdown makes me worry that even though they’re finally free of drama, the Steelers may simply lack the playmakers to be the kind of team they thought they could be with Killer B’s.

Speaking of which … Antonio Brown joining the Patriots is just the kind of thing that makes me think 1) Brown’s meltdown was a calculated move to get to a contender and 2) I should have picked New England to win the Super Bowl. Is it too late to change my pick? 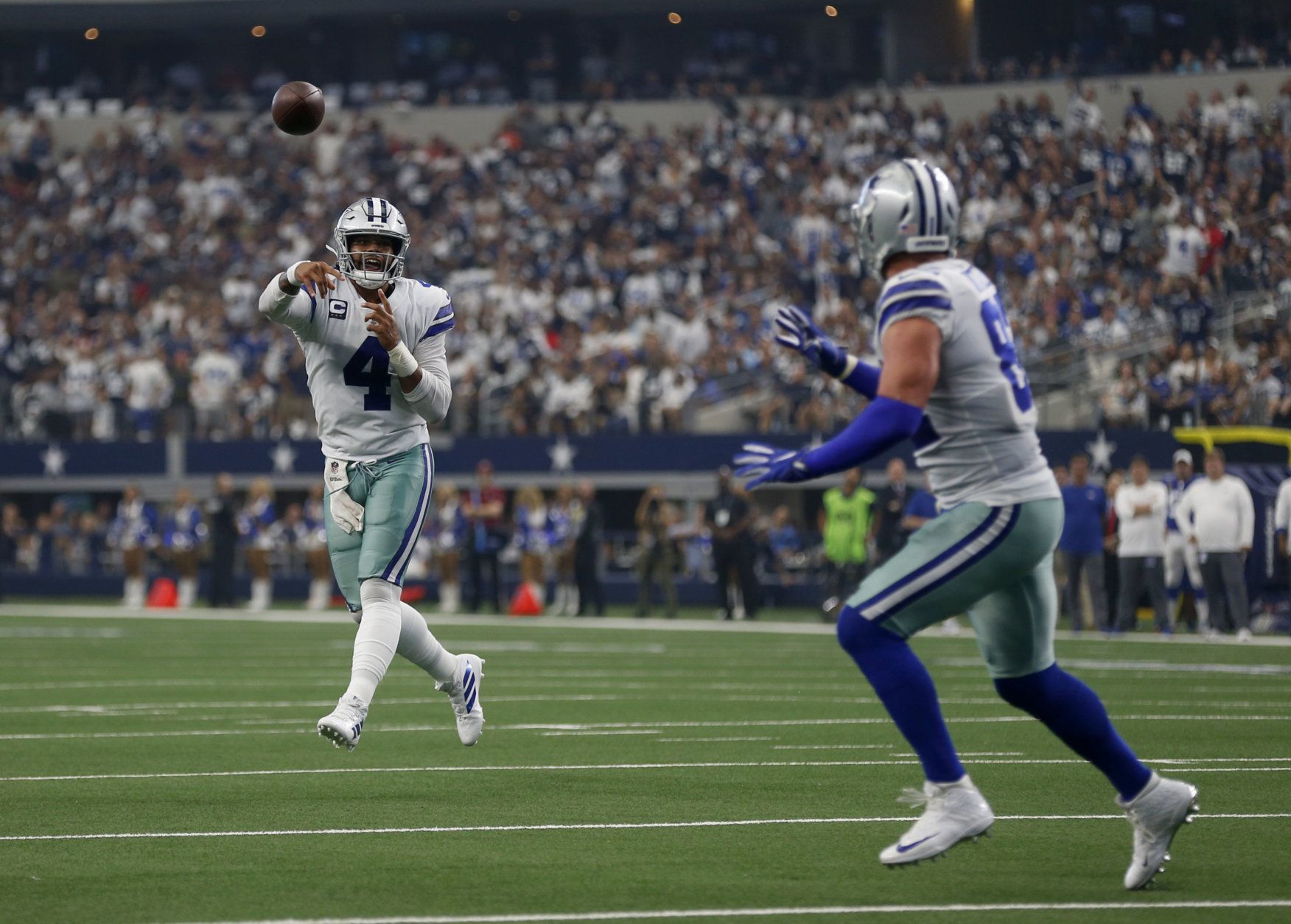 Zeke Elliott was just all right, but Dak Prescott looked like the guy the Cowboys should have broken bank for before the season: His 405 yard, four TD performance netted him a perfect passer rating (making this the first time in a generation two QBs have done that on the same day), leaving the Giants so thoroughly beaten they gave Daniel Jones a few reps in garbage time. The Redskins better work out whatever communication issues they have, or next week’s game at FedEx Field is already over. 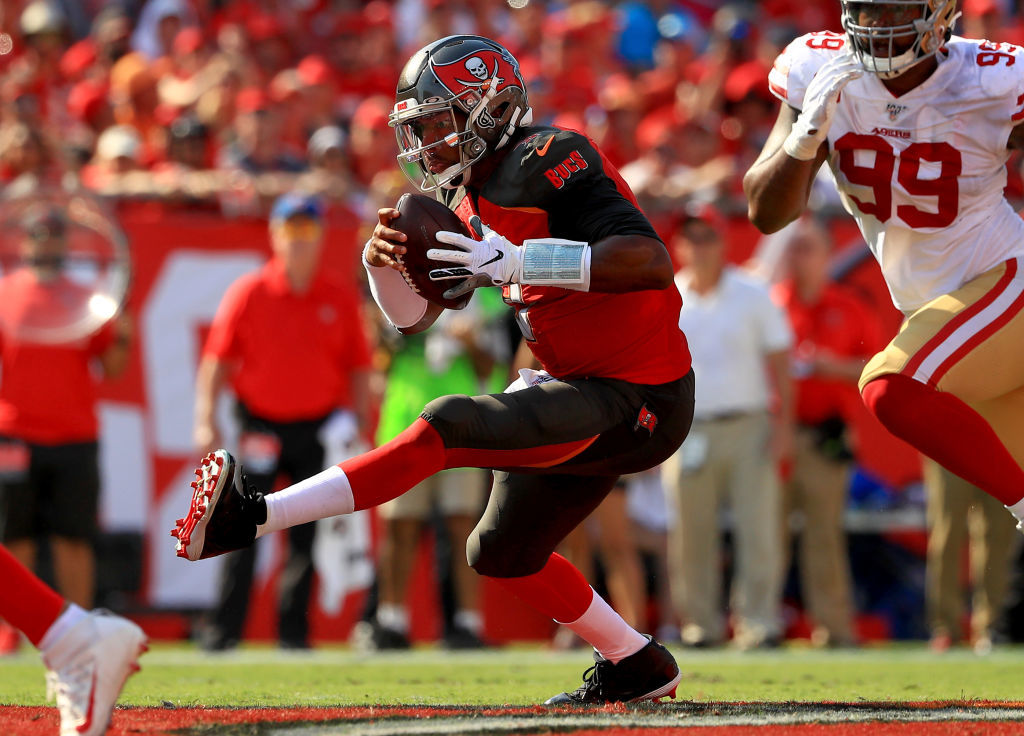 5/16
Jameis Winston #3 of the Tampa Bay Buccaneers rushes during a game against the San Francisco 49ers at Raymond James Stadium on Sept. 8, 2019 in Tampa, Florida. (Getty Images/Mike Ehrmann)

Two of Jameis Winston’s three interceptions were run back for touchdowns on the day he surpassed Blake Bortles for the most career games (17) with multiple picks since entering the league in 2015. Whenever your quarterback is mentioned in the same breath as The Human Turnover, your season is doomed. 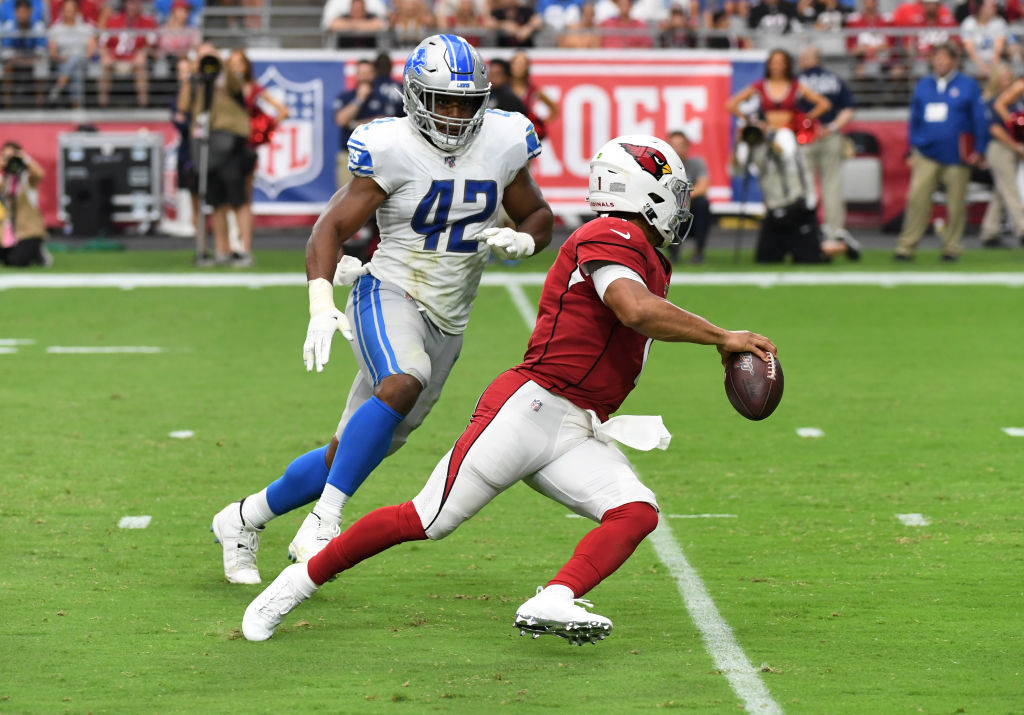 6/16
Kyler Murray #1 of the Arizona Cardinals avoids being sacked by Devon Kennard #42 of the Detroit Lions during the fourth quarter at State Farm Stadium on Sept. 8, 2019 in Glendale, Arizona. (Getty Images/Norm Hall)

For the first time in 65 years, the Cardinals started a rookie QB. And while he did lead a late comeback to force overtime (and the eventually, the result I hate most in pro sports), he looked like a rookie by taking five sacks and averaging only 5.7 yards per pass. As much as I hate ties, this is one case where neither team deserved to win. 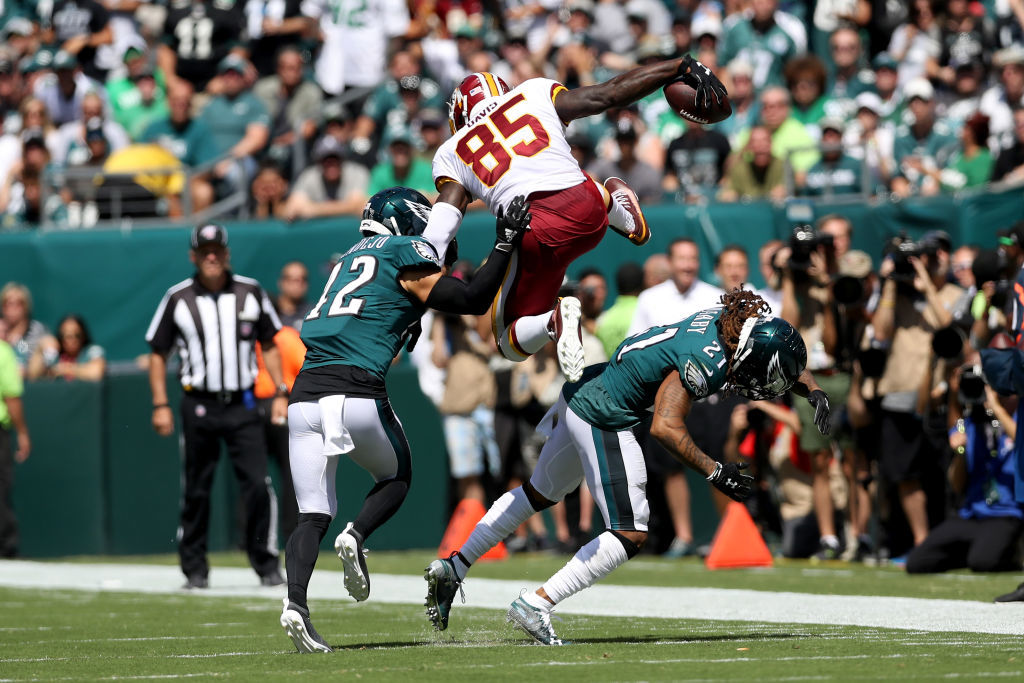 7/16
Vernon Davis #85 of the Washington Redskins jumps over Andrew Sendejo #42 and Ronald Darby #21 of the Philadelphia Eagles to score a first-quarter touchdown at Lincoln Financial Field on Sept. 8, 2019 in Philadelphia, Pennsylvania. (Getty Images/Rob Carr)

Forget the blown 17-point lead or DJax scorching his former team (again), or the organizational arrogance of making last year’s leading rusher Adrian Peterson a healthy scratch for the first time in his career (on a day in which they were held to 28 yards rushing, I might add). I’ll remember this game for Vernon Davis’ inspired 48-yard touchdown that gives him the sixth-most TD catches in NFL history among tight ends. 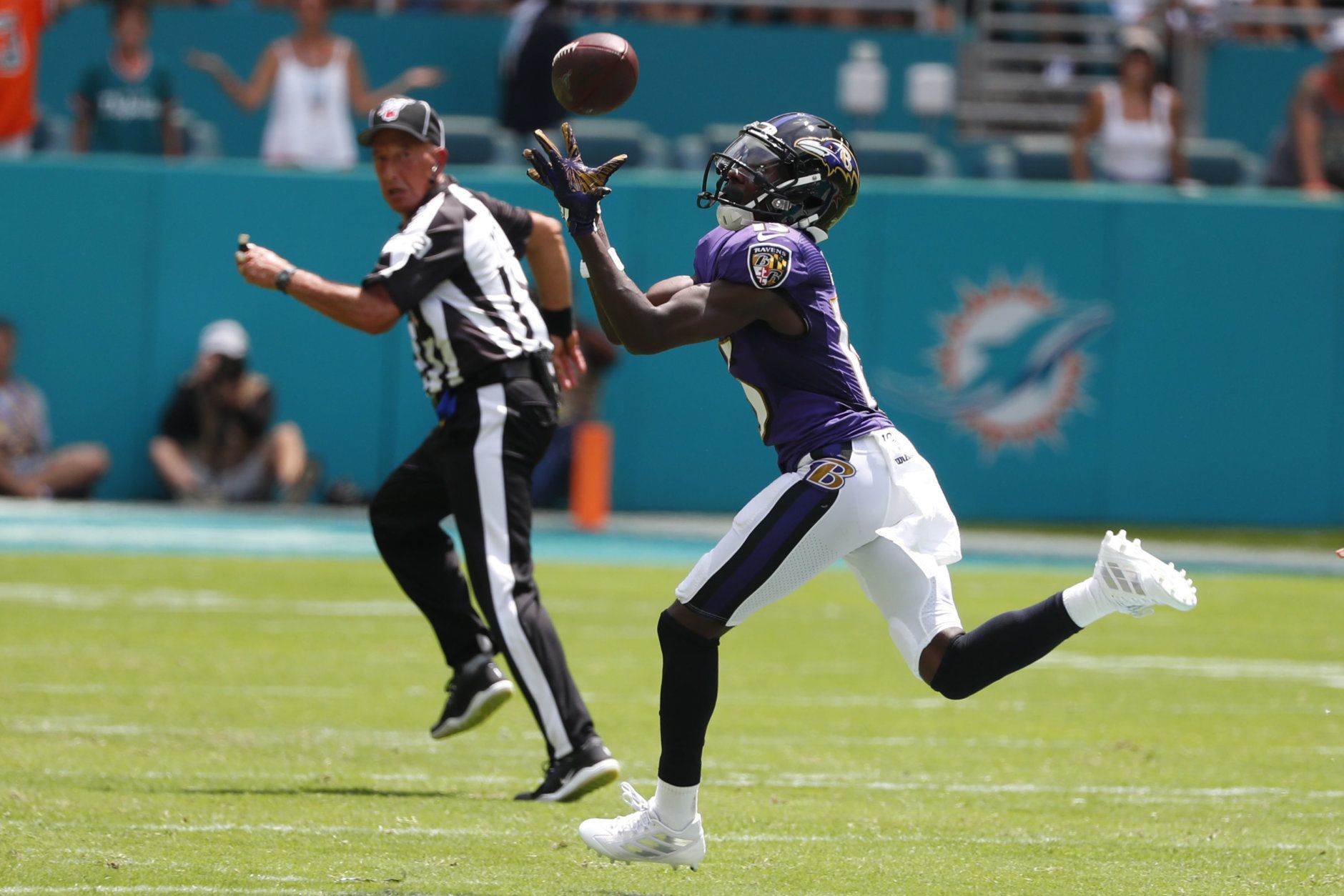 8/16
Baltimore Ravens wide receiver Marquise Brown (15) grabs a pass for a touchdown, during the first half at an NFL football game against the Miami Dolphins, Sunday, Sept. 8, 2019, in Miami Gardens, Fla. (AP/Wilfredo Lee)

Marquise Brown’s first two NFL catches were touchdowns totaling 130 yards, making him the first player in NFL history to score multiple 40-yard touchdowns in his career debut. Veterans Mark Ingram and Earl Thomas also had great debuts for Baltimore, and Lamar Jackson rushed for only six yards but delivered on his promise to put on a show, notching a perfect passer rating and matching a franchise record with five TDs in his hometown. Either this really is a revolutionary offense, or Miami is right to mutiny. 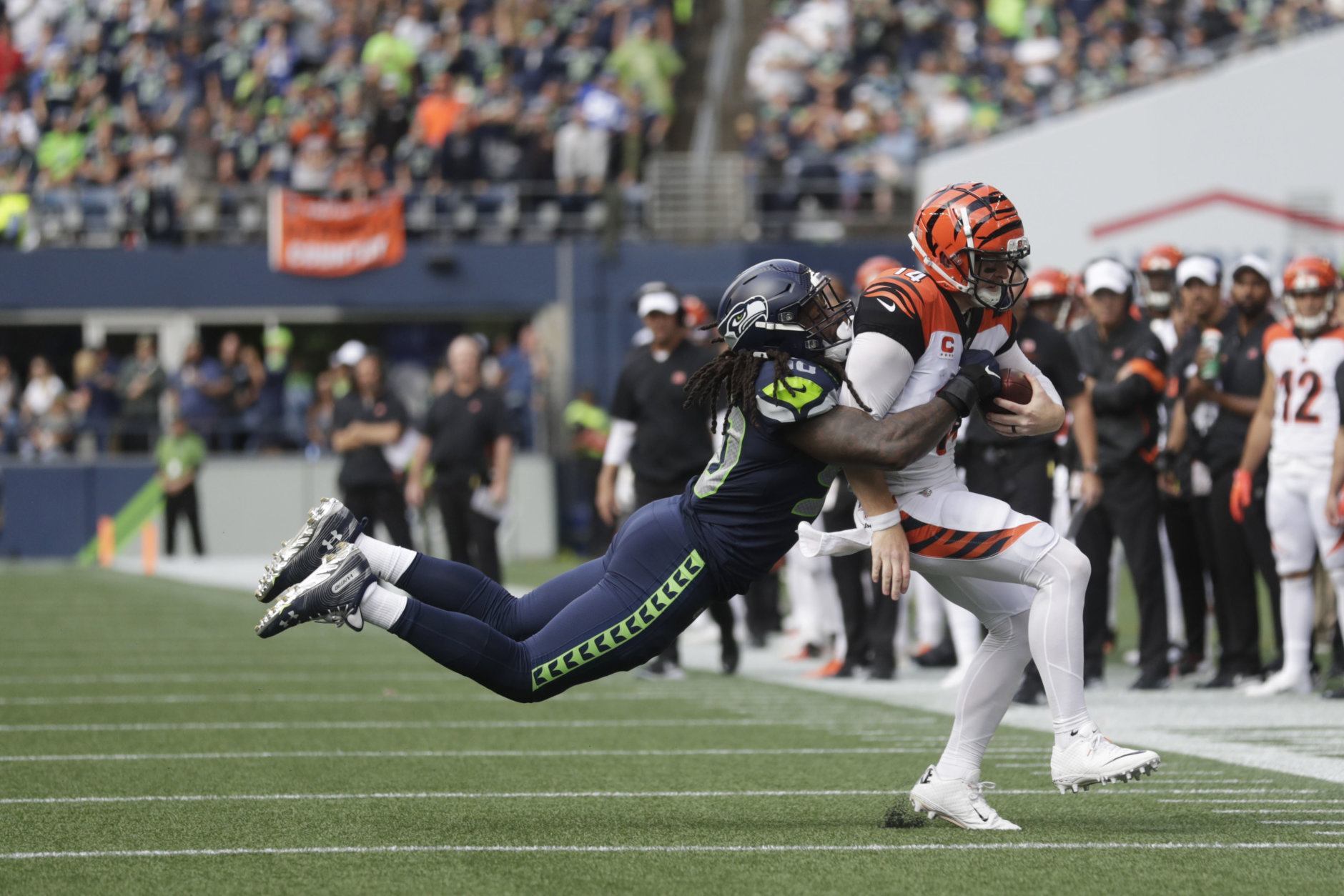 Even if getting the most out of John Ross is the only thing Zac Taylor does in Cincinnati, the Bengals will be a fun team to watch, but definitely still bound to lose more games than they win.

And even if opening things up for his new teammates is all Jadeveon Clowney does in Seattle, the Seahawks will be a fun team to watch — bound to win more games than they lose. 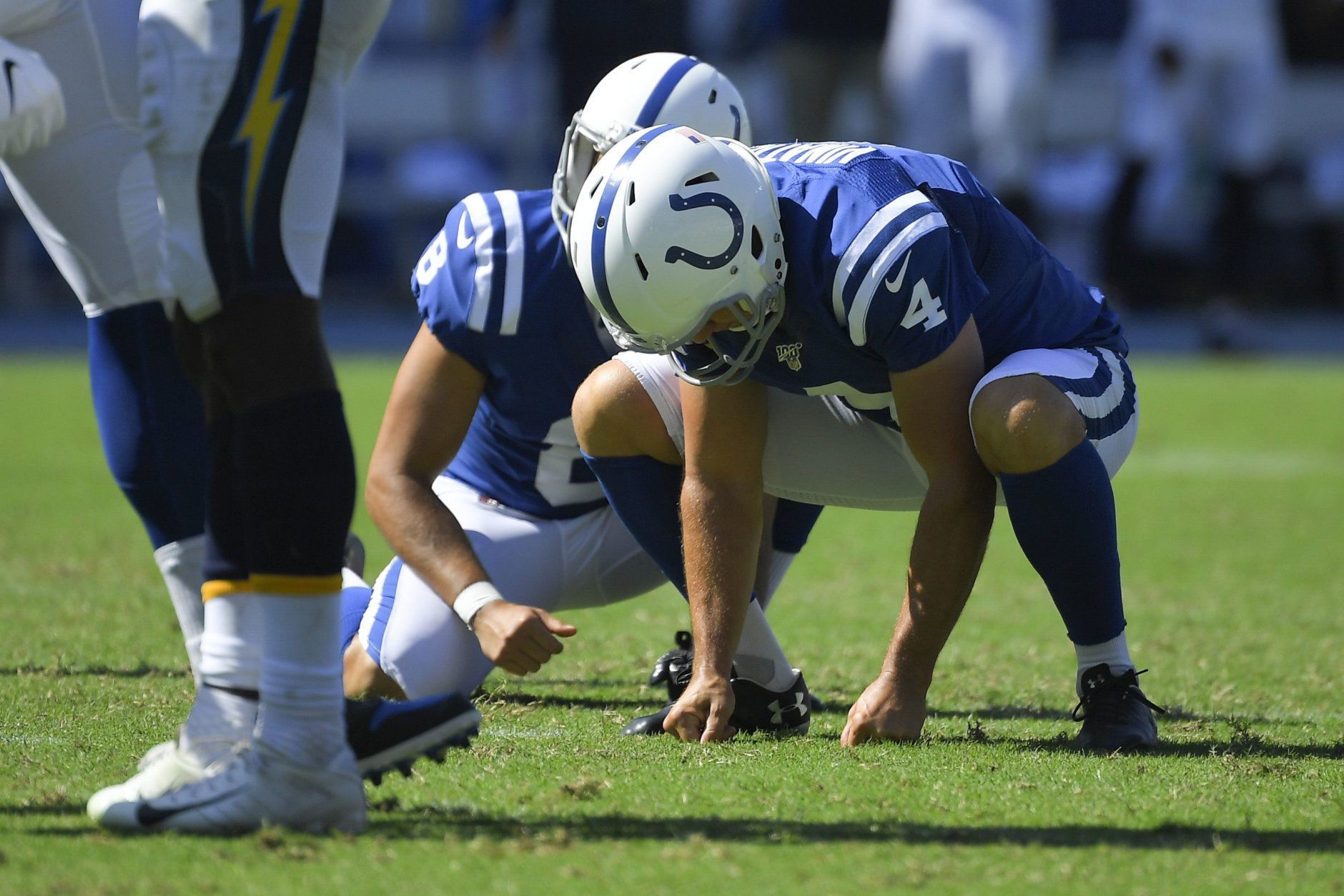 10/16
Indianapolis Colts kicker Adam Vinatieri reacts after missing a field goal during the second half in an NFL football game against the Los Angeles Chargers Sunday, Sept. 8, 2019, in Carson, Calif. (AP/Mark J. Terrill)

In one of the most surprising turn of events on Opening Day, Adam Vinatieri — perhaps the most clutch kicker in NFL history — opened his 24th NFL season by missing two makable field goals and an extra point in a game that made 23-year-old Marlon Mack’s big day a mere footnote. Considering he’s spent nearly half his life in the NFL, it wouldn’t be a surprise if this is the beginning of a sad ending to his career.

Oh, and Austin Ekeler is the first Charger to tally 150 yards from scrimmage and three touchdowns in a season opener. Melvin Gordon who? 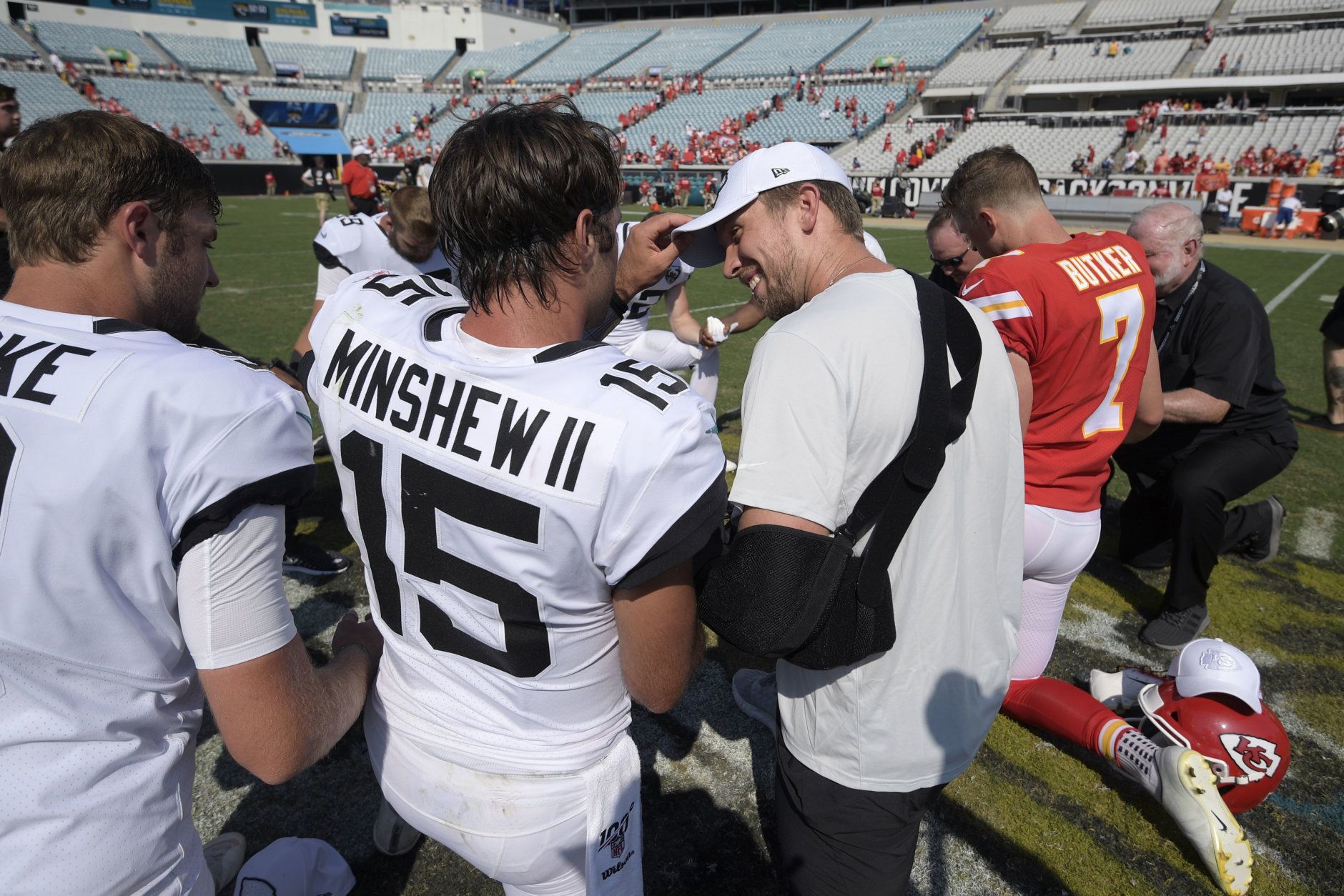 Remember when I picked Jacksonville to win the AFC South? Nick Foles is out indefinitely with a broken collarbone, so unless Gardner Minshew is the next Kurt Warner … nevermind.

And yeah, Patrick Mahomes is still pretty good at football. 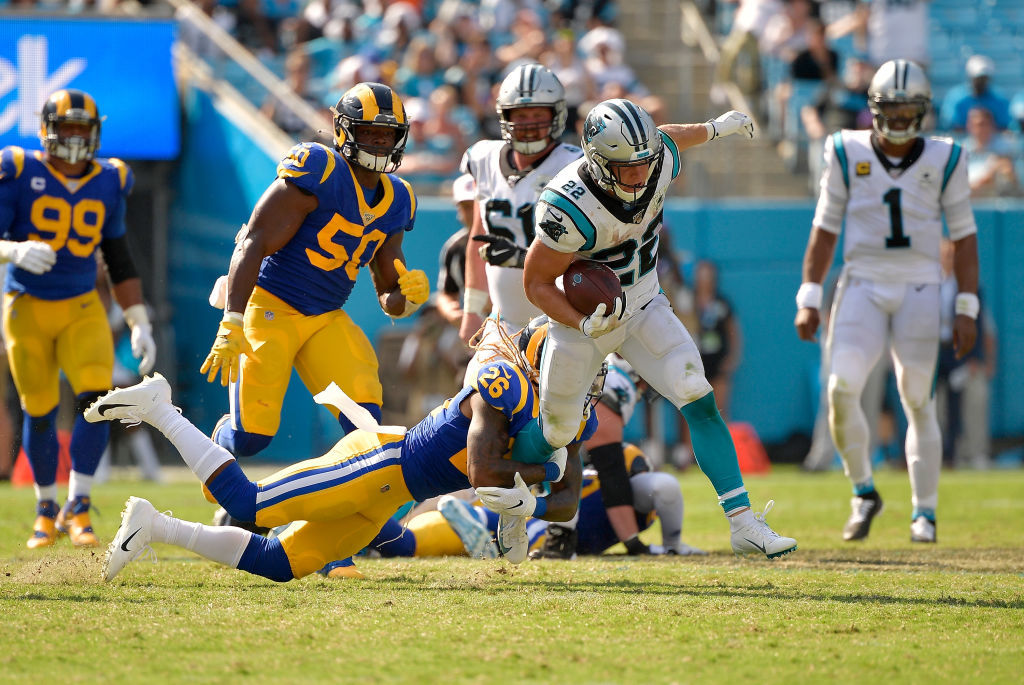 12/16
Marqui Christian #26 of the Los Angeles Rams tackles Christian McCaffrey #22 of the Carolina Panthers during the fourth quarter of their game at Bank of America Stadium on Sept. 8, 2019 in Charlotte, North Carolina. The Rams won 30-23. (Getty Images/Grant Halverson)
Rams 30
Panthers 27
If Cam Newton passed the ball as well as he can apparently catch it or as well Christian McCaffrey runs (and catches) it, Carolina probably would have won in a blowout. 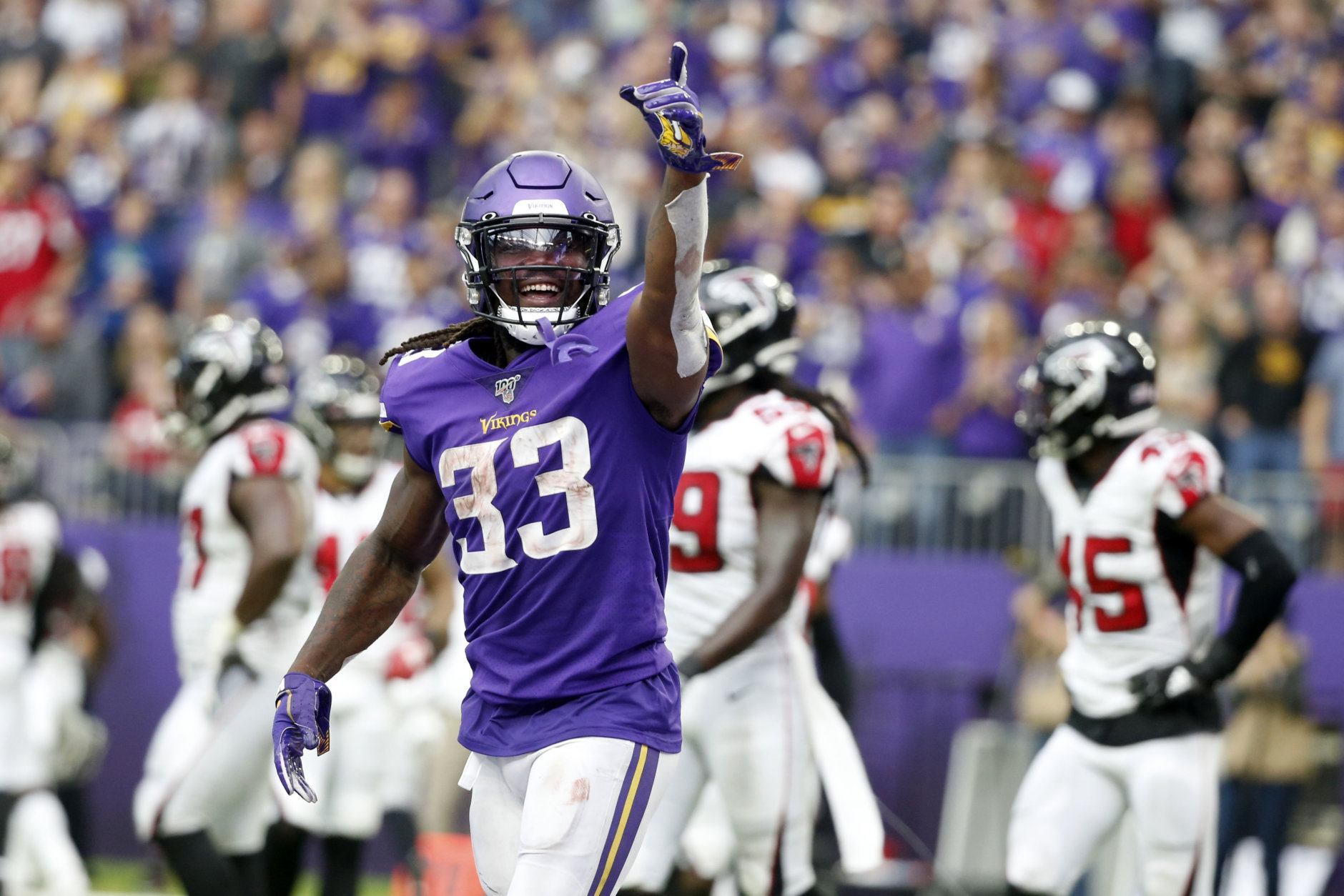 13/16
Minnesota Vikings running back Dalvin Cook (33) celebrates after scoring on a 7-yard touchdown run during the second half of an NFL football game against the Atlanta Falcons, Sunday, Sept. 8, 2019, in Minneapolis. (AP/Bruce Kluckhohn)

My “Matty Ice for MVP” take is off to a rough start, but Minnesota looked like the team I picked to run its way to a division title, with Dalvin Cook becoming the second Viking to top 100 yards and two touchdowns on Opening Day a decade after Adrian Peterson did it. 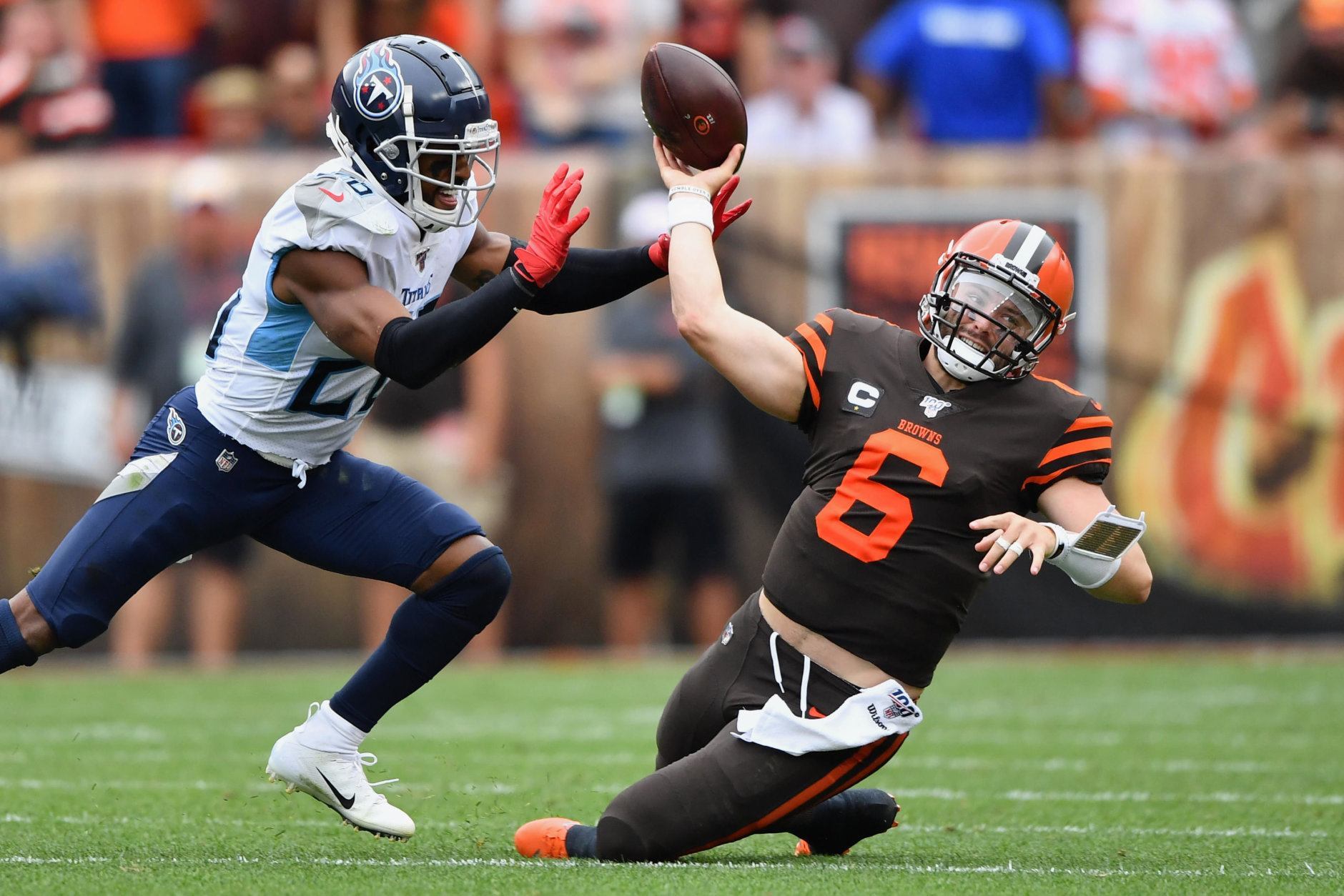 14/16
Quarterback Baker Mayfield #6 of the Cleveland Browns is sacked by Logan Ryan #26 of the Tennessee Titans in the second quarter at FirstEnergy Stadium on Sept. 8, 2019 in Cleveland, Ohio. (Getty Images/Jamie Sabau)

Even with their much-improved roster, Cleveland saw the Browns commit 18 penalties, Baker Mayfield throw as many fourth quarter completions as interceptions (3) en route to an NFL-record 15 straight losses in season openers. The Browns aren’t as bad as Delanie Walker would lead you to believe, but perhaps they’re not nearly as good as their considerable hype. 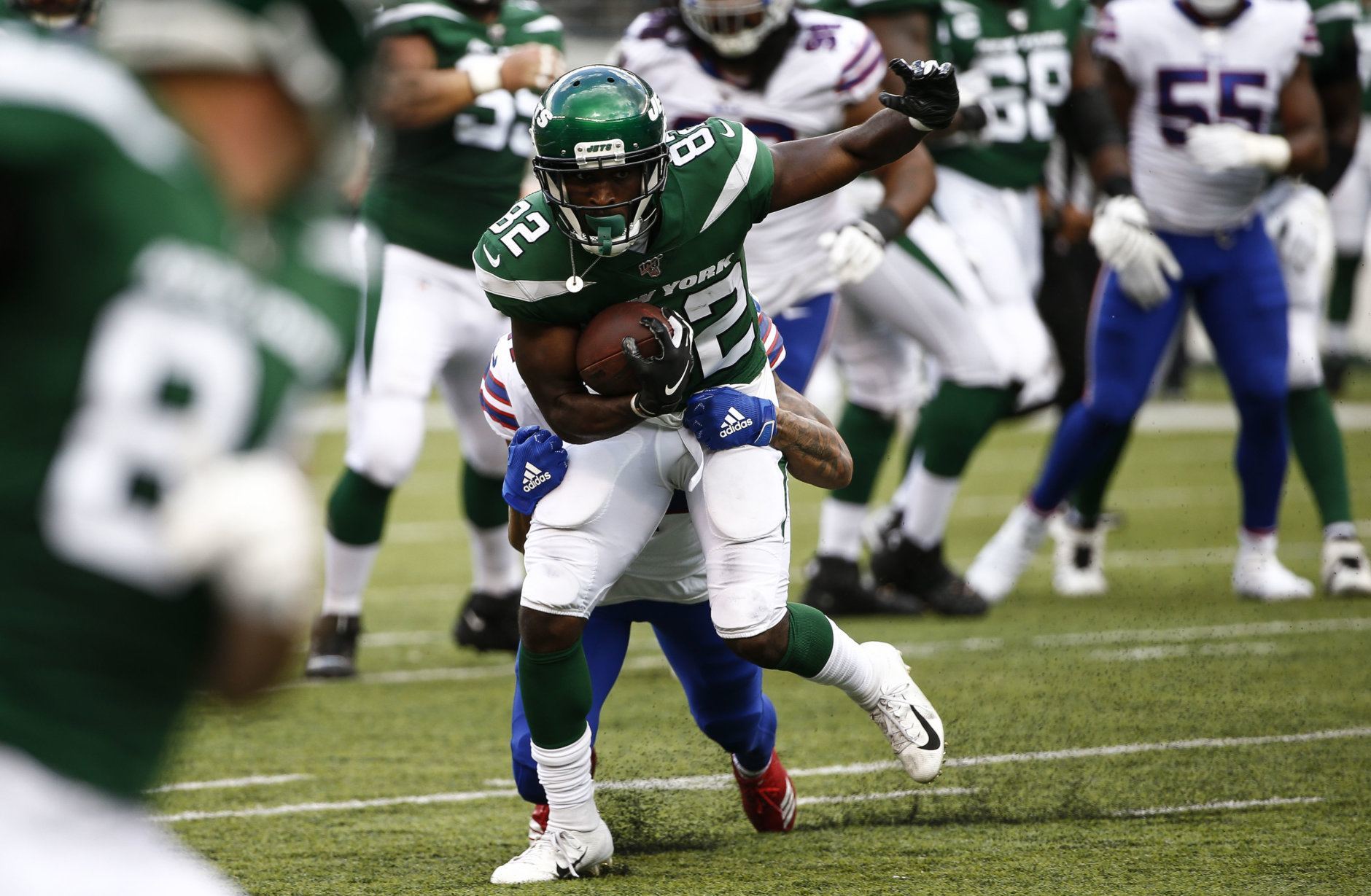 15/16
Jamison Crowder #82 of the New York Jets runs the ball against the Buffalo Bills during their game at MetLife Stadium on Sept. 8, 2019 in East Rutherford, New Jersey. (Getty Images/Jeff Zelevansky)

Not to be outdone, the much-hyped Jets also lost at home to open the Adam Gase era in Gotham, as Jamison Crowder’s debut (14 catches, 103 total yards) trumped Le’Veon Bell’s (92 yards on 23 touches) and Gregg Williams’ defense couldn’t hold on to a 16-point second half lead. It’s fitting that the Jets and Browns will duel next Monday night to avoid a surprising 0-2 start to what was supposed to be a promising season. 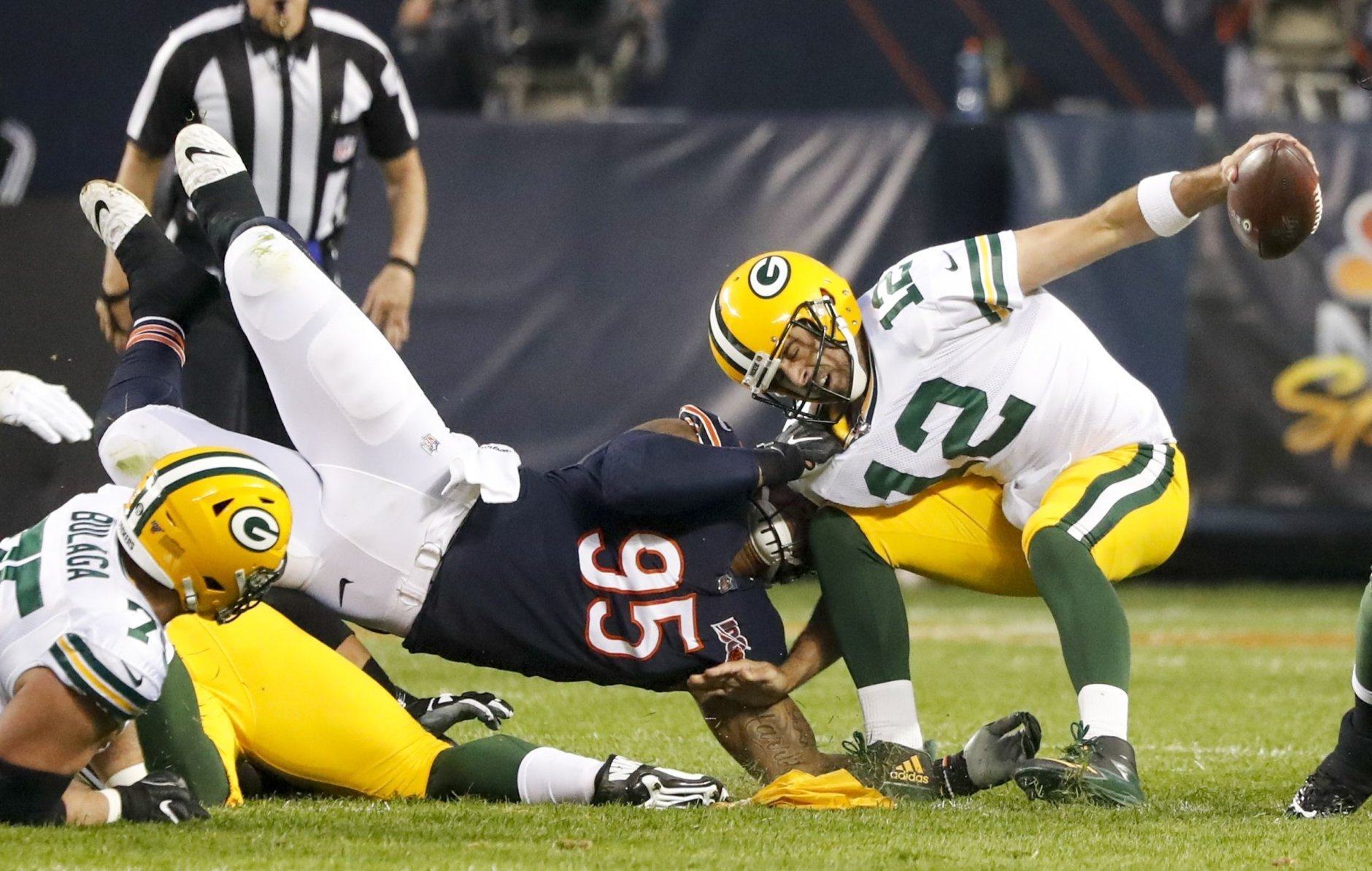 In the 199th meeting of the NFL’s oldest rivalry and the lowest scoring season opener since 2002, Chicago’s offense yielded only 19.2 yards per drive, the lowest in Matt Nagy’s career as an offensive coordinator or head coach. The Bears offense was so bad we’re not even paying attention to how equally-questionable Green Bay’s offense is. 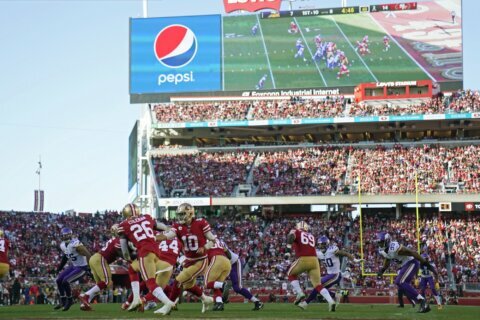 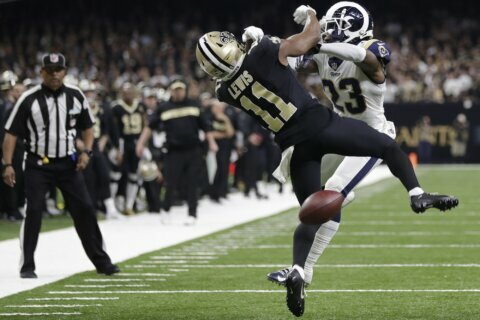 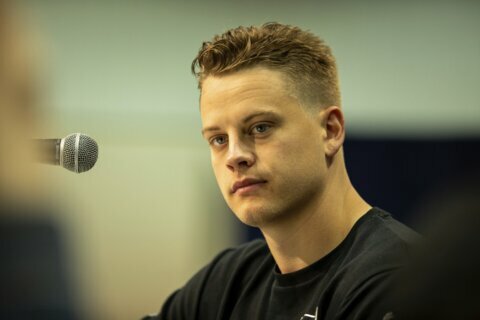 NFL News Sports
NFL 100 nfl week 1 rob woodfork
Log in to your WTOP account for notifications and alerts customized for you.