It may look like Priya Ammu is making a crepe at her stand in the Foggy Bottom Whole Foods, but she\'s preparing what she hopes is D.C.\'s next burrito: a dosa.
Listen now to WTOP News WTOP.com | Alexa | Google Home | WTOP App | 103.5 FM
(1/18) 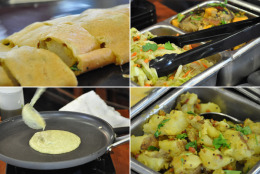 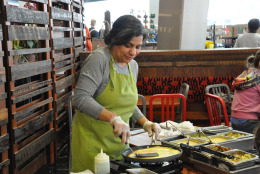 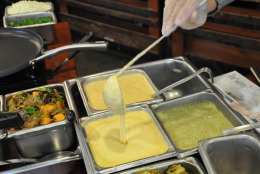 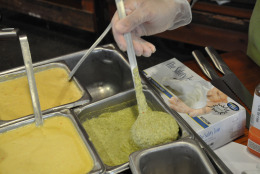 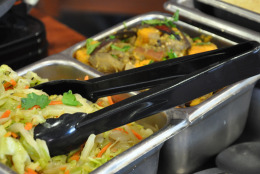 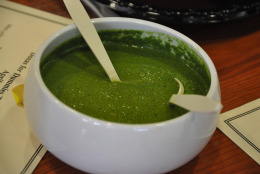 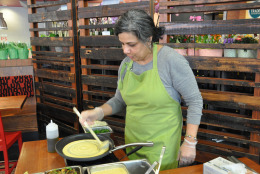 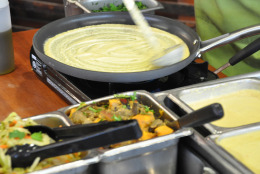 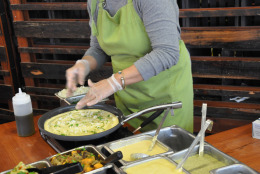 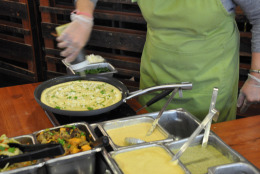 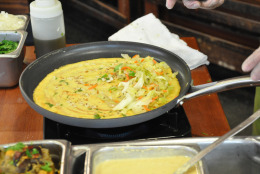 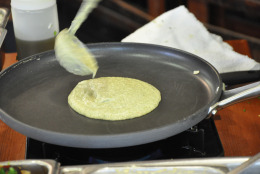 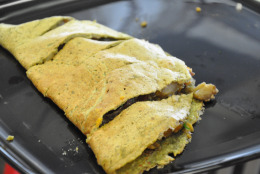 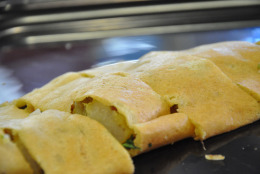 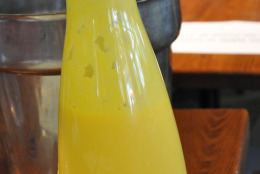 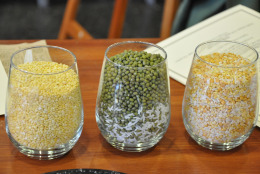 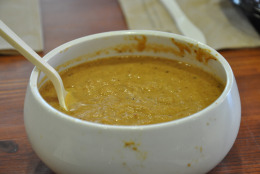 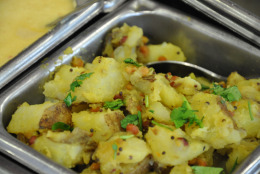 WASHINGTON — At the Whole Foods in Foggy Bottom, Priya Ammu spoons a thick batter into a hot pan and uses her ladle to spread it thinly and evenly in a precise circular motion.

She sprinkles a few pieces of chopped onion and a pinch of chopped cilantro on top of the batter and waits for the underside to turn crisp and golden brown.

It may look like Ammu is making a crêpe, but she’s preparing what she hopes is D.C.’s “next burrito”: a dosa.

“It’s a snack food, it’s a street food, it’s a breakfast food,” says Ammu, owner of dc dosa. “This is what food should taste like.”

Ammu’s dosas are not like the traditional masala dosas found in South India. Hers are home-based dosas, a concept introduced by her mother-in-law years ago.

The difference is in the batter. Traditional Indian dosas resemble crepes in many ways. They are a thinly-cooked pancake made from a fermented rice batter, and they are served with chutneys for dipping.

Ammu’s dosa batters are made from lentils, and she stuffs her dosas with fillings such as sweet potatoes and eggplant; sautéed cabbage and carrots; and curry potatoes.

Her mother-in-law’s traditional recipe does not call for the fillings, but Ammu deviates from family tradition to make her dosas “more of a meal.”

“Just having a dosa with a chutney is not always sufficient,” she says.

By the nature of the ingredients used, Ammu’s dosas are gluten-free, vegetarian and vegan — and filling.

“This is the way people should eat … It’s not manipulated in any way,” says Ammu, a Bethesda, Md., resident who grew up in Bombay, India and came to the U.S. for college at the age of 19.

Ammu has plenty of experience pursuing gluten-free foods. One of her three daughters has Celiac disease, and Ammu has had trouble finding healthy and tasty gluten-free products.

“A lot of the vegan and gluten-free food, I wouldn’t even serve it to my pet. They manipulate it and the minute they take the gluten out, they add stuff in that makes it unpalatable,” she says.

Ammu says the best thing for those wanting to limit gluten is to eat cuisines that are naturally gluten-free or vegetarian.

“I know it’s a trend to say ‘Oh, I have a gluten-free diet.’ But seriously, less gluten is good for everybody,” she says.

Which is exactly why Ammu hopes the dosa will take-off like the burrito.

“I think it’s just a whole lot tastier. My wrap has a flavor, the inside has a flavor and the chutneys have a flavor. I think it’s better for you; it’s a great way to eat.”

She says all of this without offensive to burrito chains; she loves Chipotle and even built her business model on the popular chain’s concept.

“Five years ago when Chipotle started becoming really big … that’s when the idea really germinated for me,” Ammu says.

Dosas are made-to-order at Ammu’s counter in Whole Foods, and much like popular burrito chains, customers pick the “wrap” (a four-lentil dosa, a petite yellow dosa or a whole mung lentil dosa), the filling (curry potatoes, sautéed cabbage or eggplant and sweet potatoes) and the chutney (cilantro sesame, tomato peanut or onion tamarind).

And similar to burrito-eating etiquette, Ammu is insistent on eating dosas with your hands.

“You have built-in utensils right here,” she says, raising her hands.

A dosa is made in about three to five minutes and is packaged in a cardboard to-go container.

Seasonal lassis, such as mango ginger, are also on the menu.

After winning the DC StartUp Kitchen contest in 2012, Ammu, whose background is in corporate hospitality and IT, was awarded the opportunity to open a pop-up restaurant under an established restaurateur.

She approached Whole Foods and opened her stand soon after in the Foggy Bottom store in January 2013.

Ammu is currently looking to expand to other locations, and mentioned the P Street and Old Town Alexandria Whole Foods locations as possibilities.

Introducing Washingtonians to authentic Indian food is another goal of Ammu’s. She says a lot of the Indian food in America is “colonial British food.”

“Chicken tikka masala is like the national dish of Great Britain … I’m on a mission here to change the way people eat and to change the perception people have of Indian food.”