Coronavirus News: The nuance of dealing with COVID-19 | New cases in Montgomery Co. | 'Is It Normal Yet' Podcast: A perfect storm | Latest cases in DC region
Home » Weather News » DC region set for…

The D.C. area is in for a much-needed stretch of sunny, cool, dry weather as it recovers from the the remnants of Hurricane Ida, which triggered severe storms and deadly flash flooding on Wednesday.

Ida may be gone, but the storm’s aftermath will be felt for days, if not longer. In Maryland, officials are still assessing the widespread damage caused by at least two destructive tornadoes in the listening area: One widely seen near Annapolis, Maryland, and a second reported in Charles County.

On Thursday, the National Weather Service concluded that the Annapolis tornado was an EF2, with winds reaching 125 mph. That tornado is estimated to have ripped tree trunks from the ground and roofs from buildings.

Flooding of streams and rivers will also remain a concern for the next couple of days. Ida dumped more than 7 inches of rain over parts of Northern Maryland in a relatively short period of time.

The National Weather Service said the amount of rain that fell at BWI Marshall Airport on Wednesday set a record at 4.13 inches. The previous record was 3.96 inches, set in 1952.

Flood warnings and watches are still in effect for portions of the Potomac River, Conococheague Creek and Monocacy River.

“The remnants of Ida, no longer a tropical system but a strong low pressure system, is now departing the U.S., and the cold front it merged with is now moving well south and east of us,” Storm Team4 meteorologist Chuck Bell said. “Behind it, a strong area of Canadian high pressure is building in, and northwest winds will continue to dry us out (Thursday).”

Bell said that cold front will usher in some “spectacular” weather, with low humidity and fall-like temperatures dipping all the way down to the 50s by Friday morning.

The calmer weather will provide much-needed relief to the Northeast, which was hit with an unprecedented amount of rainfall and flash flooding from the D.C. and Baltimore region to New York City and suburban New Jersey.

Despite the dramatic weather improvement, many people hoping to travel north on Amtrak were out of luck Thursday, with train service canceled from D.C. to Boston because of the heavy rainfall.

The cancellation left some passengers surprised and trying to figure out what to do at Union Station on Thursday.

Matt Mimnaugh told WTOP that he didn’t realize how bad the situation was until this morning when he saw “there was a massive deluge in New York City.”

His plan is “a cross between either going to book a train tomorrow, getting a rental car or looking into bus fare.”

Ogo Nwodoh, who’s trying to return home to New York City, told WTOP that she tried to hop on a Megabus when her train was canceled, “but you can’t do any of the buses.”

“It’s been a bit of a nightmare. It came out of nowhere, too. We didn’t know there would be a storm,” she said. “There’s definitely a disconnect because it looks beautiful outside but apparently the trains can’t go today. Doesn’t make sense to me but it’s our reality unfortunately.”

Service will resume on the Northeast Corridor tomorrow, 9/3. https://t.co/R3CHHaQREo pic.twitter.com/6vxLpegp3a

Amtrak also said for Friday, Train 66, which normally originates from Newport News, Virginia, will instead start in D.C.

Thursday’s inconvenience was nothing compared to Wednesday’s destruction.

The torrential downpours led to high water on roadways throughout the region, keeping first responders busy. One man died in Rockville after early morning storms caused a deluge that flooded two apartment buildings. In Frederick County, Maryland, 10 children had to be rescued when a school bus got stuck in high water.

Frederick County Executive Jan Gardner said authorities were dispatched to 22 water rescue calls and 56 flooding calls. “The remnants of Hurricane Ida spared us from the devastation that the Gulf Coast experienced,” she said at a public information briefing Thursday. “But we had as much as 8 inches of rain falling in parts of our county yesterday, and again, dozens of road closures and scores of water rescues and flooded buildings.”

Meanwhile, a tornado ripped through Edgewater, Maryland, knocking down trees, tearing off roofs and even flipping over cars.

In Annapolis, Maryland, one resident likened it to a scene from the Wizard of Oz: “It looked just like that,” David Joseph told WTOP, describing shingles being torn off rooftops minutes after receiving an emergency alert on his phone.

This morning, I toured storm damage in Edgewater with state and local officials. The extent of destruction is devastating, and our hearts go out to all those affected. We will provide whatever resources are necessary to help the community recover. pic.twitter.com/2WyhqKuNBy

Some Edgewater residents were picking up the pieces again almost exactly a year since an EF-1 tornado moved through their neighborhood with winds estimated at around 90 mph. Reporting from the scene, WTOP’s Dave Dildine felt an “eerie sense of déjà vu.”

“I don’t know what’s going on with the weather and all but it’s really just crazy that two tornadoes have happened in the past year,” said Kylie Koren. Koren said her family’s house and the fence around it still bare scars from the 2020 twister.

Koren mentioned that the exact same three houses that were hit in 2020 suffered damage on Wednesday.

“I have stood in this exact spot twice in less than a year, and both times it’s been covering tornado damage,” Dildine said. “Two tornadoes moving two different directions a year apart, their paths crisscrossing right here at South River Landing.”

However, Koren added that “we do have some leaks and damage but we’re all safe and that’s all that really matters.”

This happened live on air. Route 50 through Annapolis and Parole is open. Numerous reports of tornado debris and damage — trees, poles, roofs — blocking West Street and other roads. @WTOP pic.twitter.com/WI91KsxQAw

To the south in Charles County, a law enforcement officer observed a separate funnel on the ground near Allens Fresh spinning toward Dentsville east of Md. Route 301; no damage was immediately reported.

The National Weather Service is surveying the Annapolis area to determine the twister’s intensity and path. It will release its conclusions to the public.

Much of the region saw between 3 and 5 inches of rainfall, with even higher amounts further north near Pennsylvania. Ida is now history, but all that water has to go somewhere — and as forecasters expected, what began as flash floods on smaller streams is draining into the area’s main stem rivers.

Buckeystown Park is under water. The nearby Monocacy River is expected to be over its banks all day, which could affect roads that cross it. @WTOPtraffic pic.twitter.com/lx3aTDiTWU

As of about 3 p.m. Thursday, the Monocacy River in Frederick was at 22 feet — seven feet above flood stage. At this height, the National Weather Service predicts MD Route 26 will be flooded near the Monocacy River Bridge. The last time the river crested to 22 feet was in 1979.

Forecasts call for the Monocacy to recede back into its banks on Saturday.

Minor flooding is expected along the Potomac in D.C. on Friday and Saturday. Flood-prone areas near Fletcher’s Boathouse, Roosevelt Island and the Georgetown boardwalk could be submerged during high tide. Several trails on both sides of the river between Great Falls and the Chain Bridge also might be impacted.

For the latest road and traffic conditions, see WTOP’s traffic page or listen to updates every 10 minutes online or on the air at 103.5 FM. Have an update? Let us know by calling 866-304-WTOP or tagging @WTOPtraffic on Twitter.

Friday: Sunny and spectacular. Highs in the mid to upper 70s.

Saturday: Mostly sunny and gorgeous. Highs in the mid 70s to low 80s.

Sunday: Partly to mostly cloudy and a bit humid. Slight chance of a shower. Highs in the mid 70s.

Monday (Labor Day): Partly sunny and warmer but comfortable. Highs in the low to mid 80s. 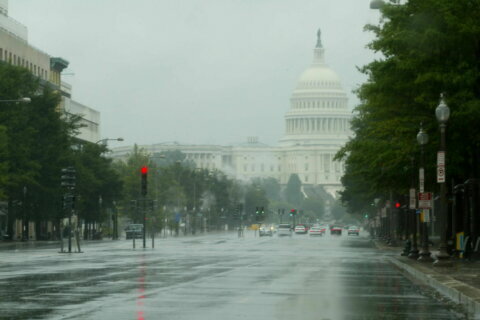