While colder than normal weather has settled into parts of the western United States, the better part of the eastern United States is in the middle of what will be the first heat wave of the summer.
Listen now to WTOP News WTOP.com | Alexa | Google Home | WTOP App | 103.5 FM

WASHINGTON — While colder than normal weather has settled into parts of the western United States, the better part of the eastern United States is in the middle of what will be the first heat wave of the summer. Of course, summer doesn’t actually start until June 21 at 12:24 a.m.

Like so many this area’s heat waves, this will be the result of a “Bermuda High,” a high pressure system centered near Bermuda, forcing a ridge in the jet stream well north into Canada, generating and transporting heat and also humidity from the Gulf of Mexico.

Sunday’s high at Washington-Reagan National was 93. So, we only need two more days in a row for a heat wave to be official. And that’s exactly what will happen.

Almost the exact same scenario is on the way for Tuesday. It’s not until Wednesday that the ridge of high pressure will get “knocked down” a bit and allow a cold front to come in from the north. That will also give the atmosphere some lift and allow some scattered thunderstorms to form, unlike Monday or Tuesday.

Winds at the surface behind the front will become more northerly or northeasterly and set us up for a cool down the rest of the week. But, it will only be to more seasonably warm temperatures with lower humidity.

And indeed it won’t just be hot, it will also be humid. Dew point temperatures will be in the upper 60s and lower 70s. The higher the dew point, the higher the amount of moisture in the air. That range is definitely when it starts to feel oppressive. It also makes the temperature effectively hotter, the heat index. Such as the wind chill in winter, the heat index is a temperature’s adjustment relative to the human body’s ability to cool itself via sweat. The more humid it is, the less sweat evaporates, taking excess heat with it.

This type of heat this soon will likely be kind of a shock to the system, too. Take extra precaution to take it easy and stay cool and hydrated. Temperatures during the Washington Nationals’ games on Monday and Tuesday evening will likely remain in the 80s.

Wednesday’s cold front will return north, as a warm front on Friday, bringing another round of showers. 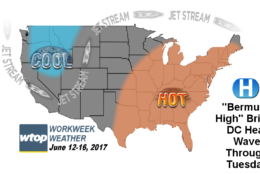 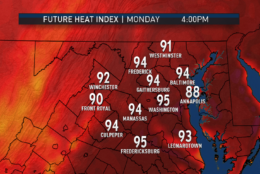 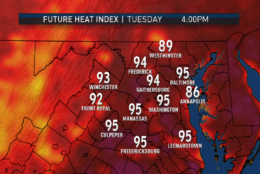 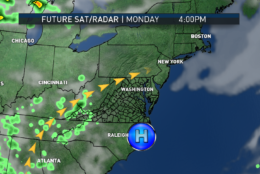 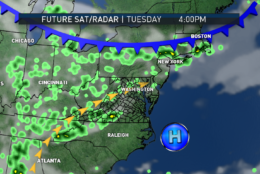 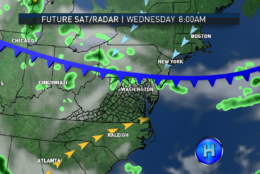 Wednesday: Not as hot because of increasing cloud cover. Very warm and very humid. Scattered thunderstorms developing, some slow movers with potential downpours.

Here are some stats on the records for this heat wave, compiled by the National Weather Service office in Sterling, Virginia