Dominant defense, spectacular special teams and offensive offense. All three phases of football get their proper due in the Week 11 Recap. 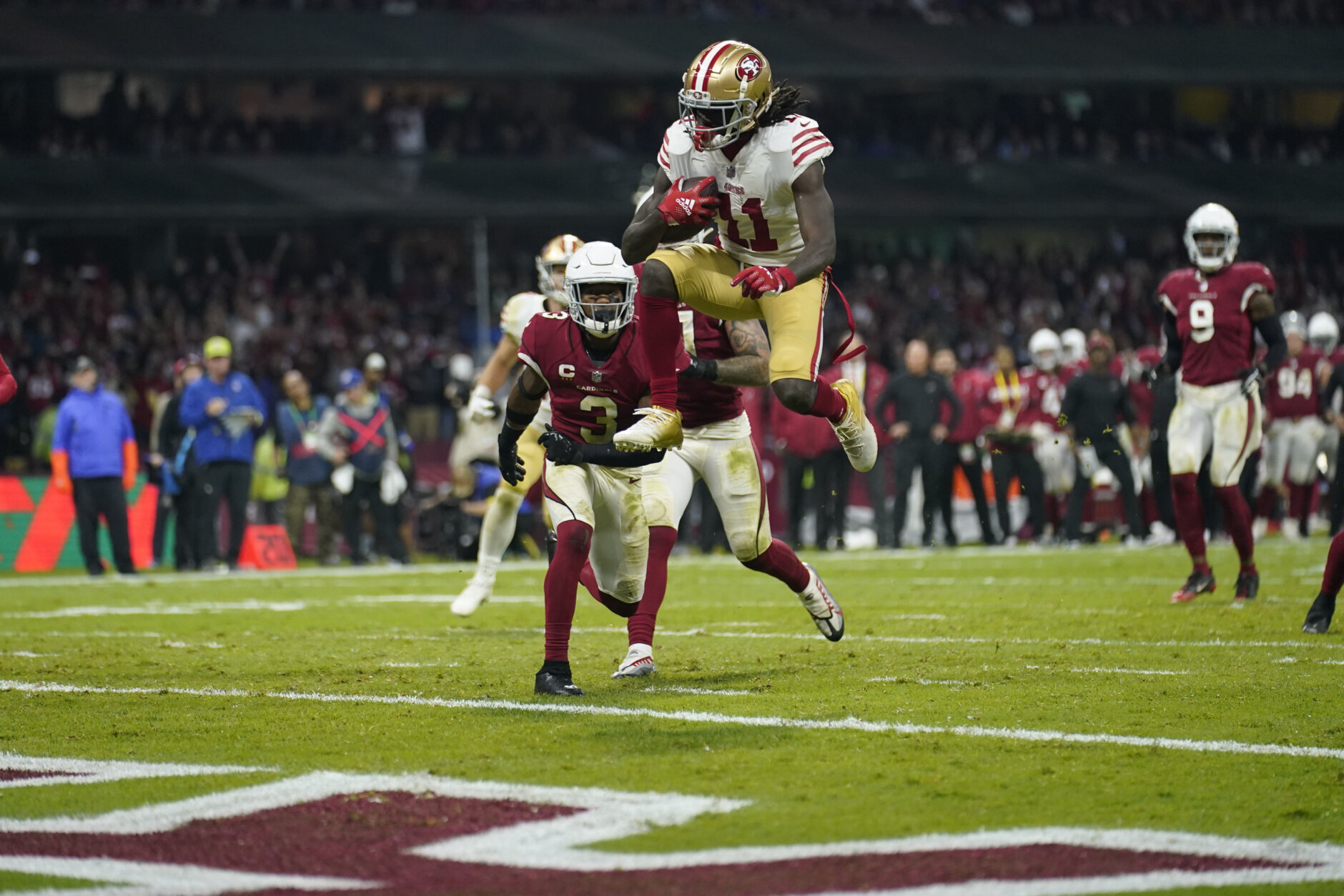 San Francisco dominated the stands in Mexico City and between the white lines, surging to the top of the NFC West by dominating the division head-to-head and displaying their Super Bowl recipe is still intact. It really feels like Washington’s visit to Santa Clara will be a de facto playoff game. 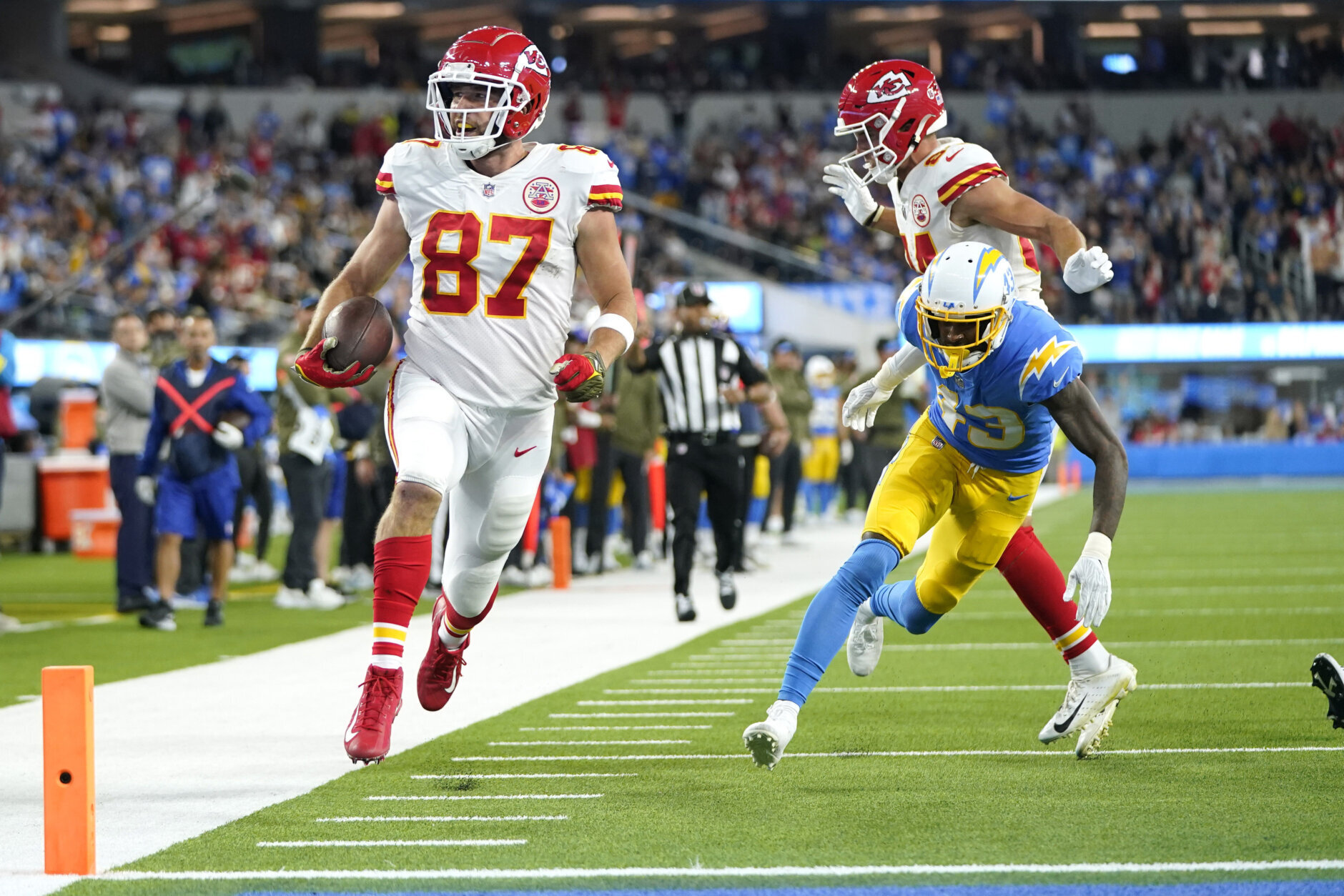 Kansas City has 25 straight wins in November and December. Patrick Mahomes has never lost a road division game. Isaiah Pacheco is the Chiefs’ first 100-yard rusher in a season and a half, signaling the type of balance that more than offsets the loss of Tyreek Hill. This team ain’t fair. 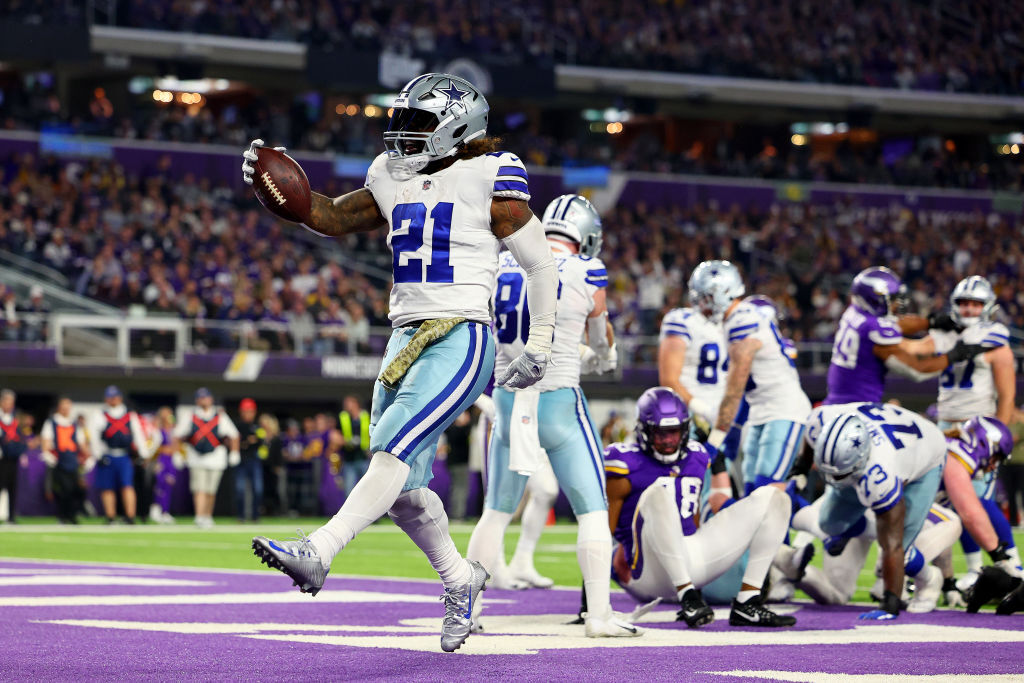 3/14
MINNEAPOLIS, MINNESOTA – NOVEMBER 20: Ezekiel Elliott #21 of the Dallas Cowboys rushes for a touchdown against the Minnesota Vikings during the third quarter at U.S. Bank Stadium on November 20, 2022 in Minneapolis, Minnesota. (Photo by Adam Bettcher/Getty Images)

A week after a franchise-worst choke job, Dallas left nothing to chance by setting a franchise record for largest road victory in a course-correcting beatdown of a Vikings team that’s not as good as its record implies.

Even with T.J. Watt playing out of his mind, Cincinnati has its first win streak in Pittsburgh since 2005-06. It’s really starting to look like the regular season finale between the Bengals and Ravens will be a prime-time flex with the AFC North title on the line. 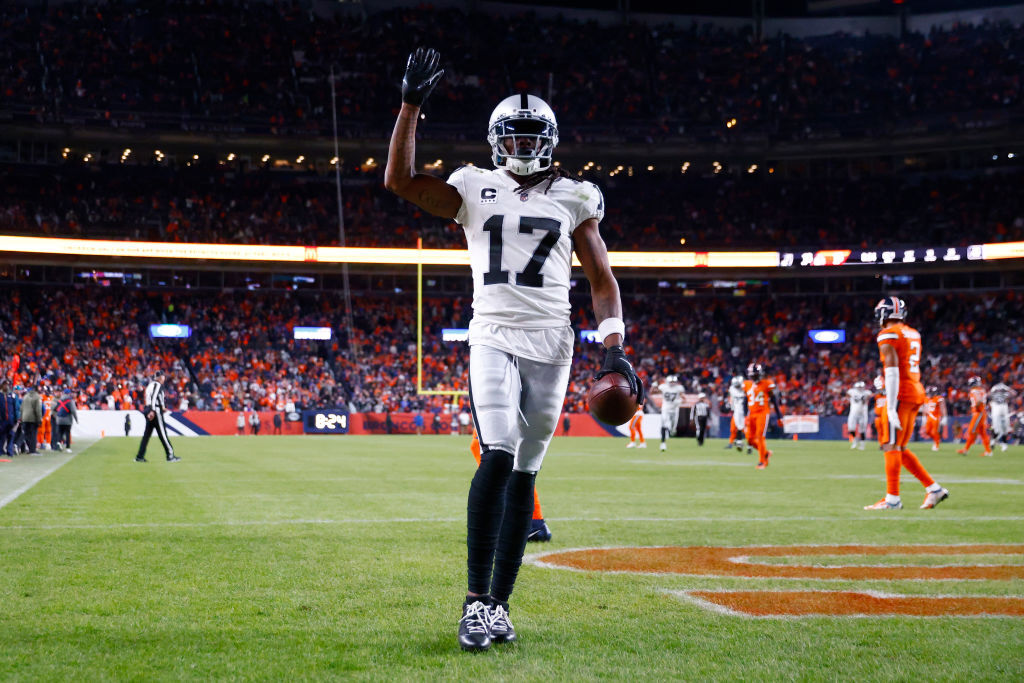 5/14
DENVER, COLORADO – NOVEMBER 20: Davante Adams #17 of the Las Vegas Raiders celebrates after scoring a touchdown to win the game over the Denver Broncos in overtime at Empower Field At Mile High on November 20, 2022 in Denver, Colorado. The Raiders won 22-16. (Photo by Justin Edmonds/Getty Images)

In this battle coaches who should never have been hired as head coaches in their respective cities, Josh McDaniels showed the only team he can beat is the one he led to a 6-0 start in 2009 — and is still only 8-24 since.

Meanwhile, Denver is already tied for the worst overtime record in a season (0-3) and has lost its first three AFC West games for the first time in 40 years. It’s a shame one of these teams got a win. 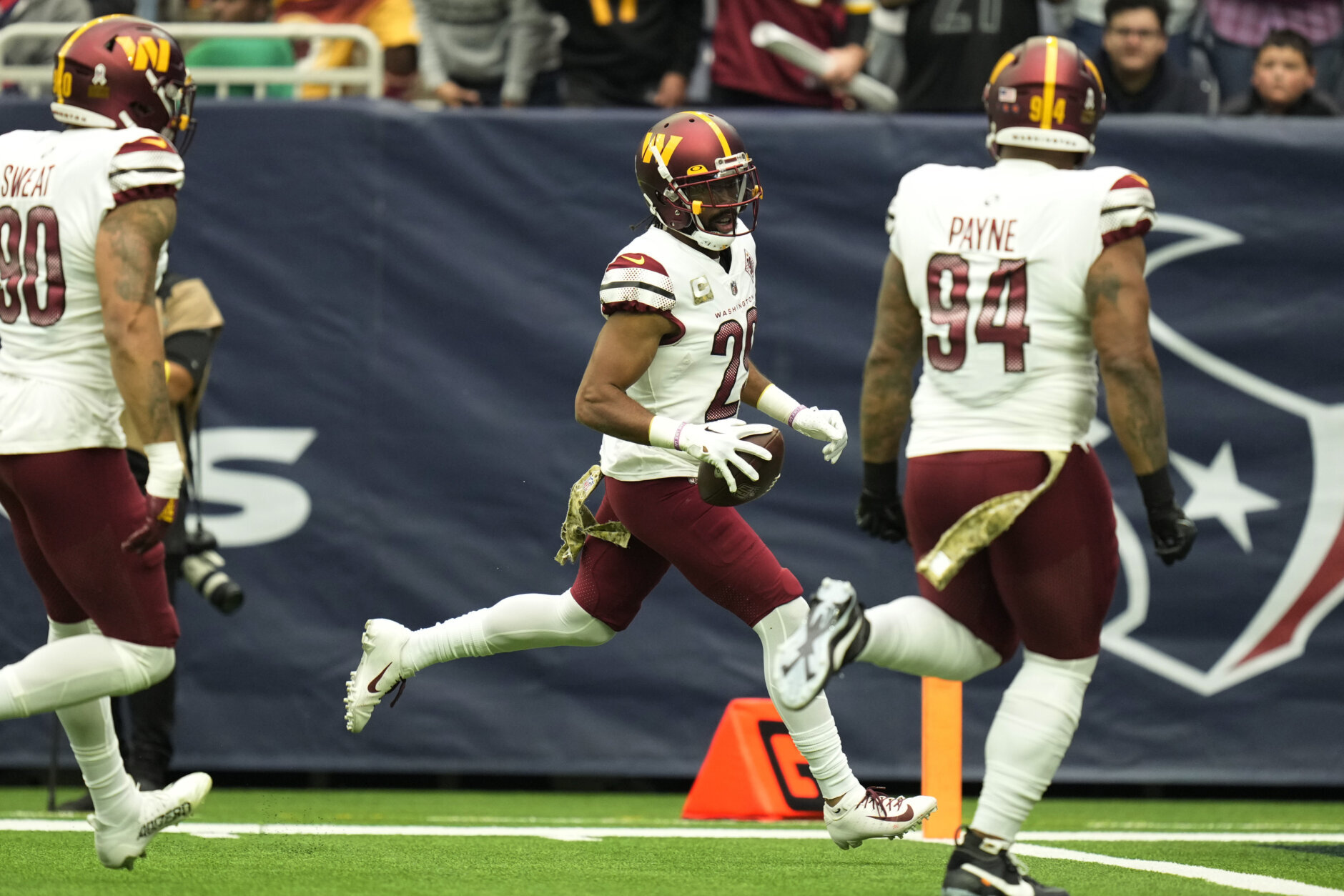 6/14
Washington Commanders cornerback Kendall Fuller (29) scores a touchdown after an interception against the Houston Texans during the first half of an NFL football game Sunday, Nov. 20, 2022, in Houston. (AP Photo/Eric Christian Smith)

Washington took advantage of a historically bad Houston run defense and the Commanders defense is finally living up to expectations: Two more takeaways (including Kendall Fuller’s first Pick 6), holding the Texans to five (5!) first half yards of offense and never letting the result of this game come into question. This is a playoff team if newly-anointed starting QB Taylor Heinicke can keep the turnovers at a bare minimum. Which calls to mind … 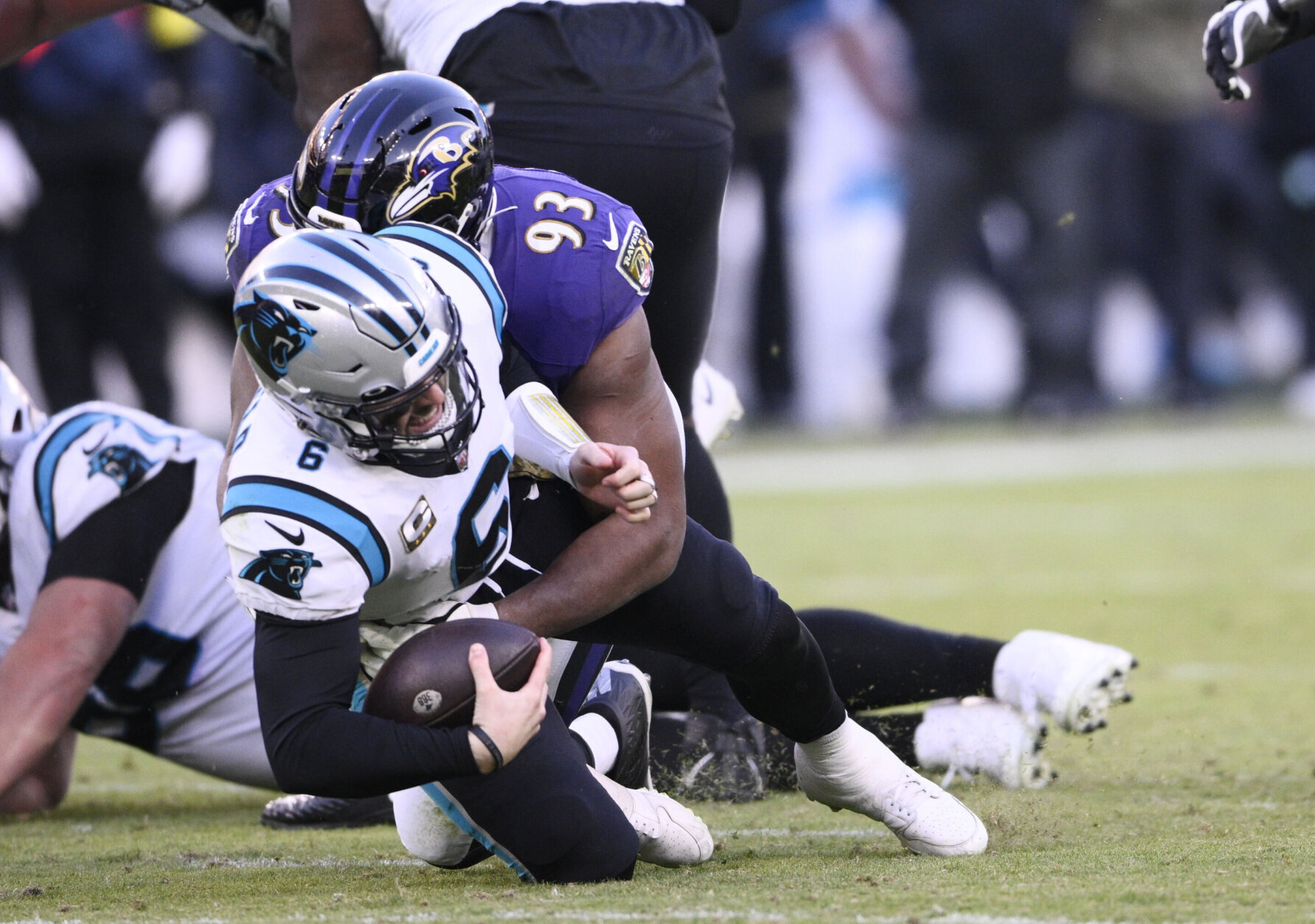 Carolina is wholly incapable of making a good decision at quarterback.

Over their previous 51 games, the Panthers are 4-3 with P.J. Walker as their starting quarterback. The loss in Baltimore makes Carolina 9-36 with all other starting quarterbacks. It’s time to borrow a page from their former coach in Washington: If there’s no hot hand at QB, stick with the one with the better mojo. 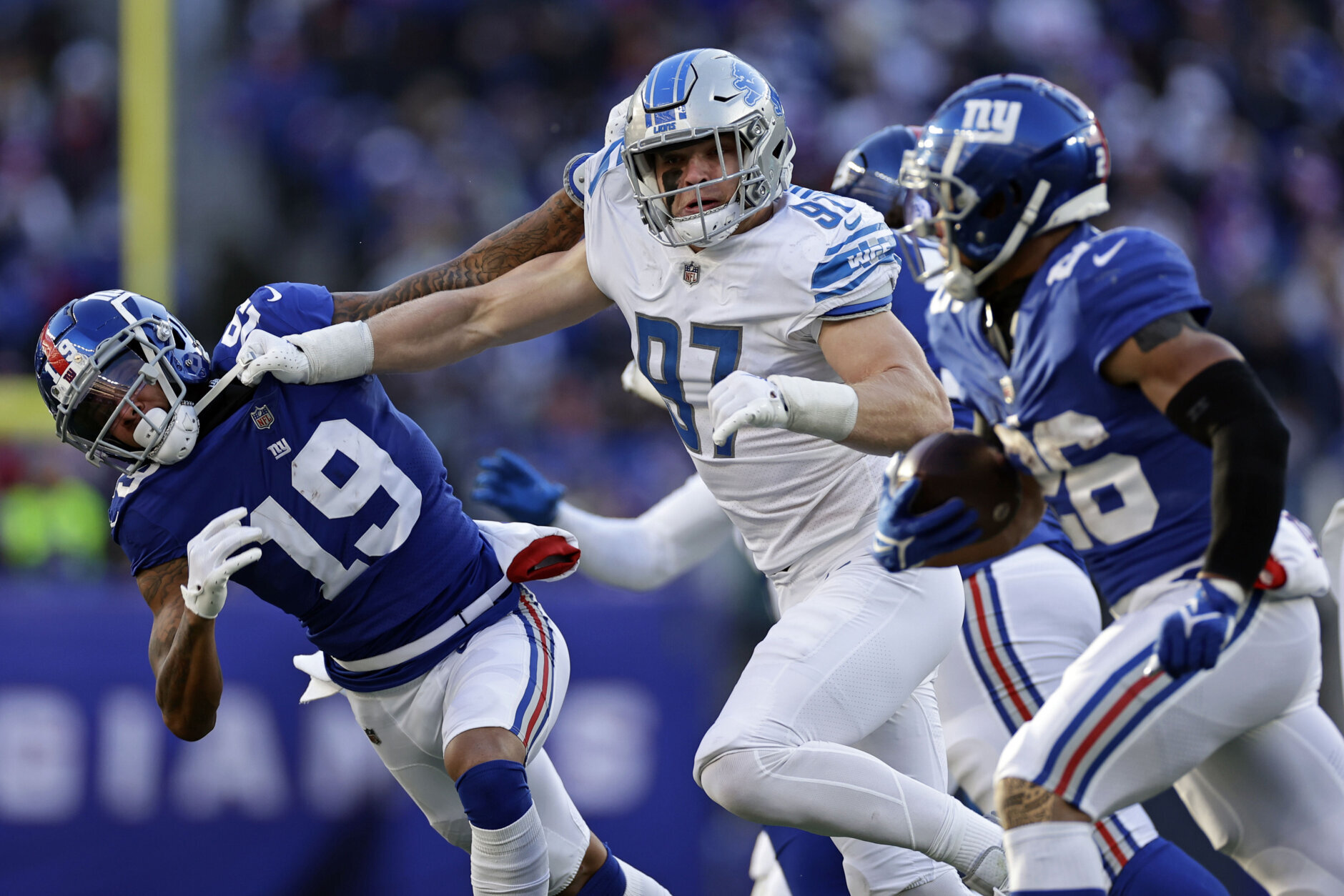 The Daniel Jones we know (the Human Turnover) finally showed up and handed Detroit its first 3-game win streak since 2017. When Jim Caldwell was the head coach of the Lions. You know, the guy who won at least three straight games in every one of his four seasons in Detroit. 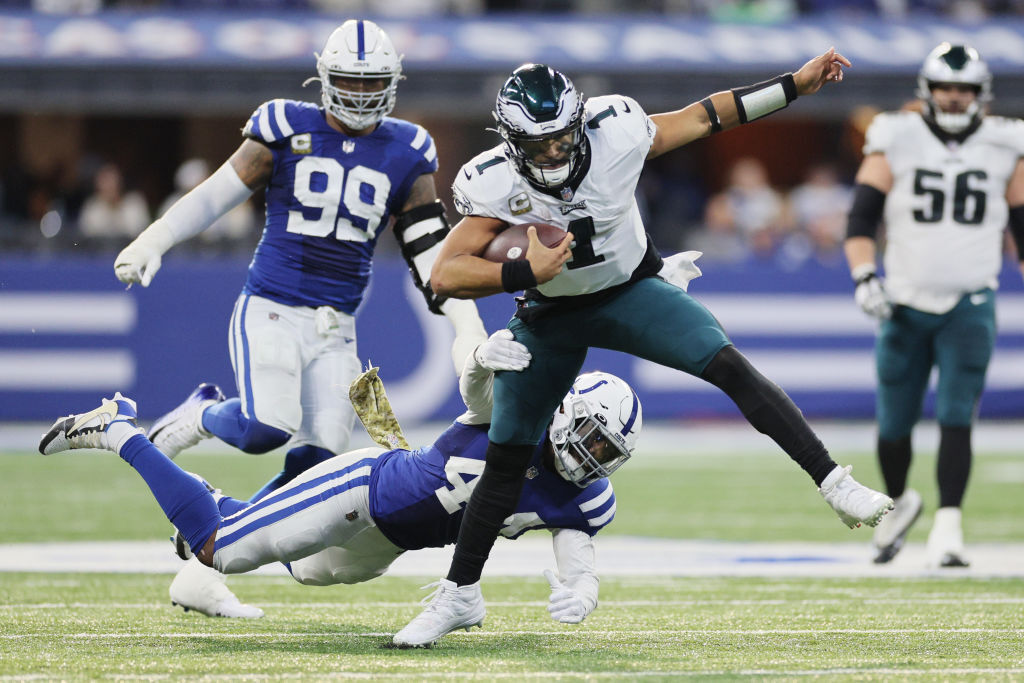 9/14
INDIANAPOLIS, INDIANA – NOVEMBER 20: Zaire Franklin #44 of the Indianapolis Colts attempts to tackle Jalen Hurts #1 of the Philadelphia Eagles during the second half at Lucas Oil Stadium on November 20, 2022 in Indianapolis, Indiana. (Photo by Andy Lyons/Getty Images)

It’s a shame this was necessary against the Saturday-led Colts but Philadelphia stayed atop the NFC thanks to its first double-digit fourth-quarter comeback since the famous DeSean Jackson walk-off punt return touchdown in 2010. Speaking of which … 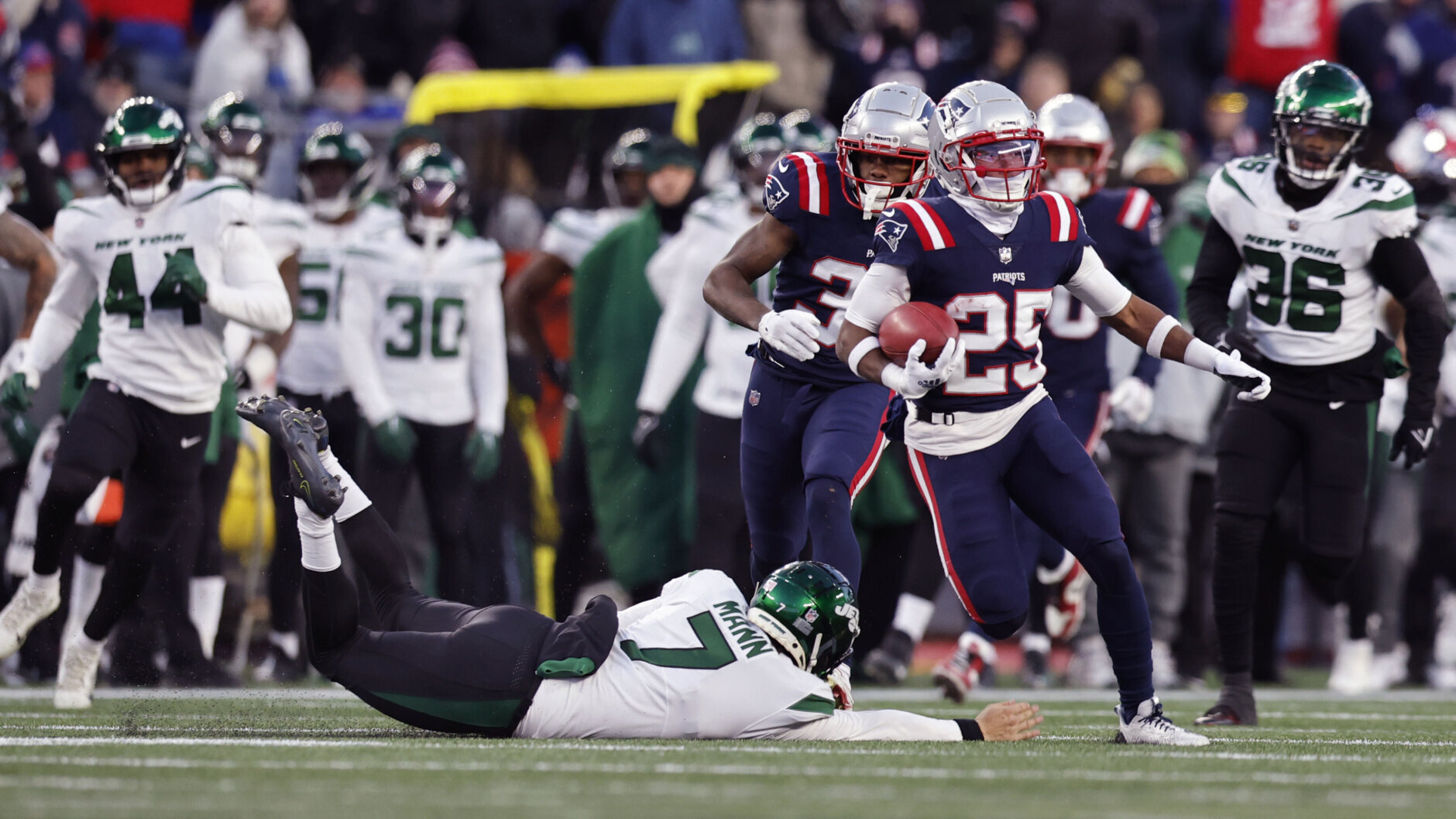 How did the New York Jets lose to New England for the 14th straight time? Having more punts (10) than completed passes (9) is a key component, especially when the last one was returned for a historic near-walk-off 84-yard touchdown.

It also kicks off the Patriots’ key 12-day stretch of three games that will determine whether there will be playoff football in Foxborough this year. Bank on the Pats going 2-1 during that window. 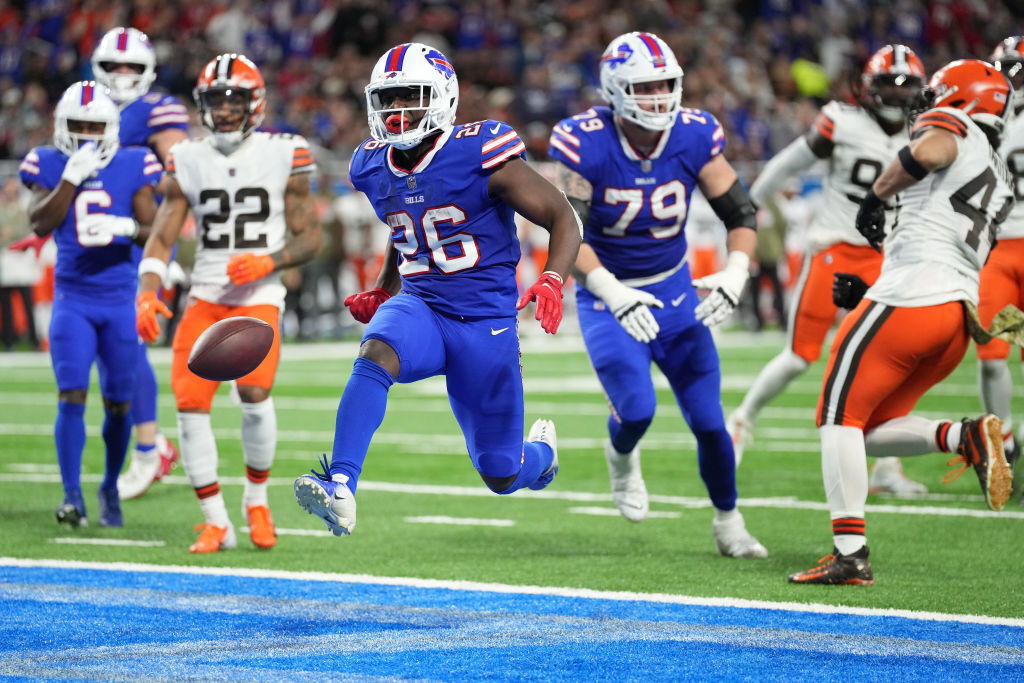 11/14
DETROIT, MICHIGAN – NOVEMBER 20: Devin Singletary #26 of the Buffalo Bills celebrates after scoring a touchdown during the third quarter against the Cleveland Browns at Ford Field on November 20, 2022 in Detroit, Michigan. (Photo by Nic Antaya/Getty Images)

Even with Cleveland having the competitive advantage of a game displaced by a storm in Buffalo conspicuously similar to the Bills’ logo, Josh Allen played within himself for a change and within an offense that rushed for 171 yards on the awful Browns defense. Don’t count the Bills out of Super Bowl contention just yet. 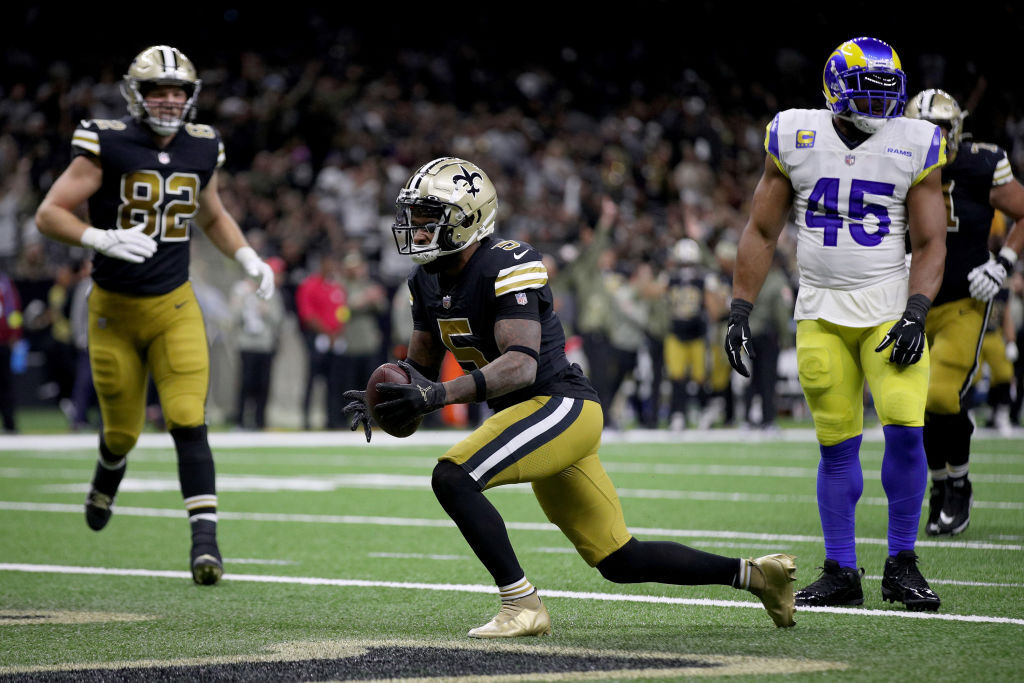 Even behind a disastrous offensive line, LA had one of its best offensive performances in weeks but it’s the Rams defense that allowed Andy Dalton to look like a Pro Bowler in LA’s fourth straight loss. I know there are still seven games left, but it’s time for the defending champs to shut down Matthew Stafford and start looking ahead to 2023. 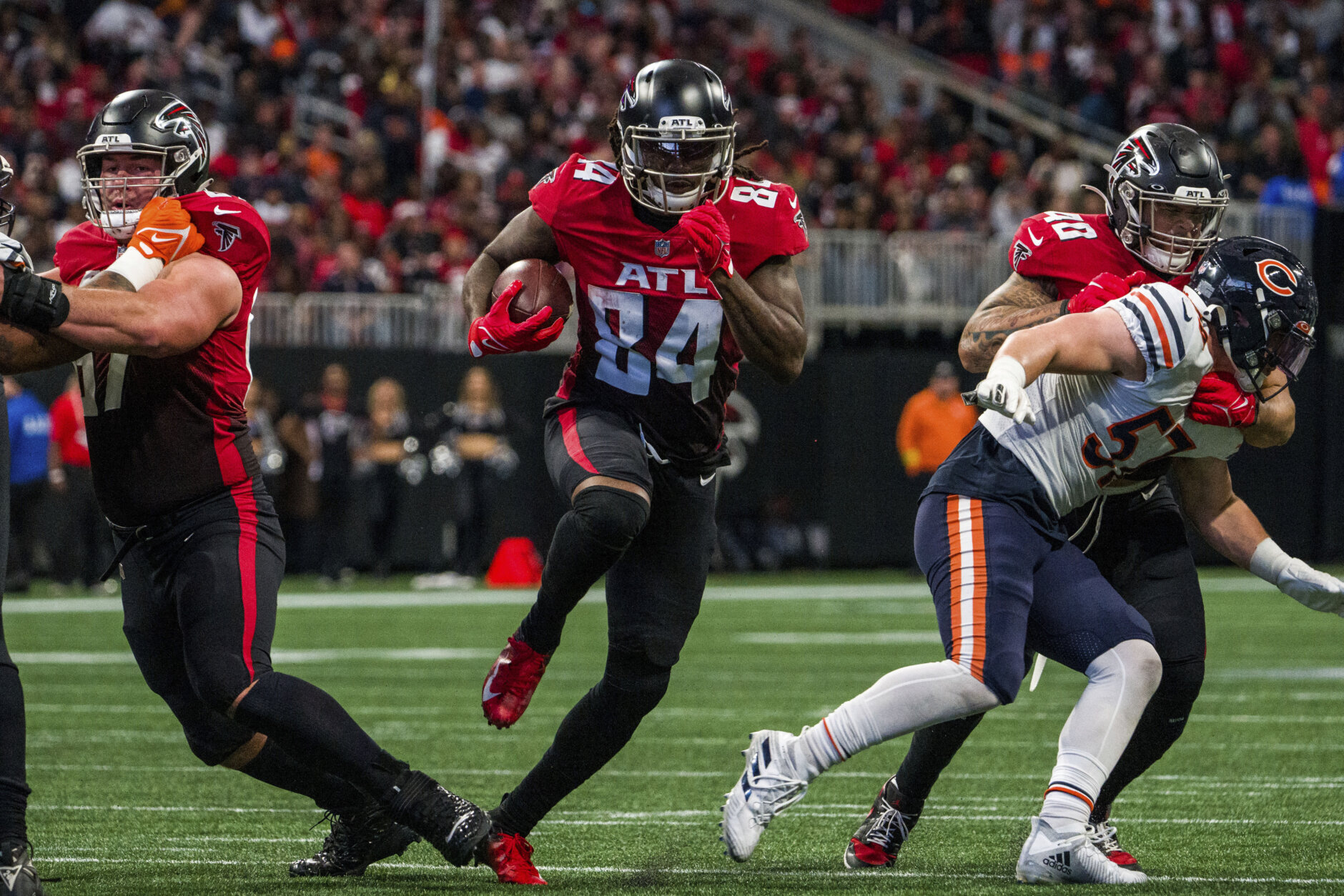 13/14
Atlanta Falcons running back Cordarrelle Patterson (84) runs the ball during the second half of an NFL football game against the Chicago Bears, Sunday, Nov. 20, 2022, in Atlanta. The Atlanta Falcons won 27-24. (AP Photo/Danny Karnik)

It was somewhat fitting that Cordarrelle Patterson broke the record for most career kickoff return touchdowns (9) against one of his former teams in a game in which his current team needed it desperately. He’s definitely the biggest X-factor for this Jekyll and Hyde Atlanta squad coming to FedEx Field. 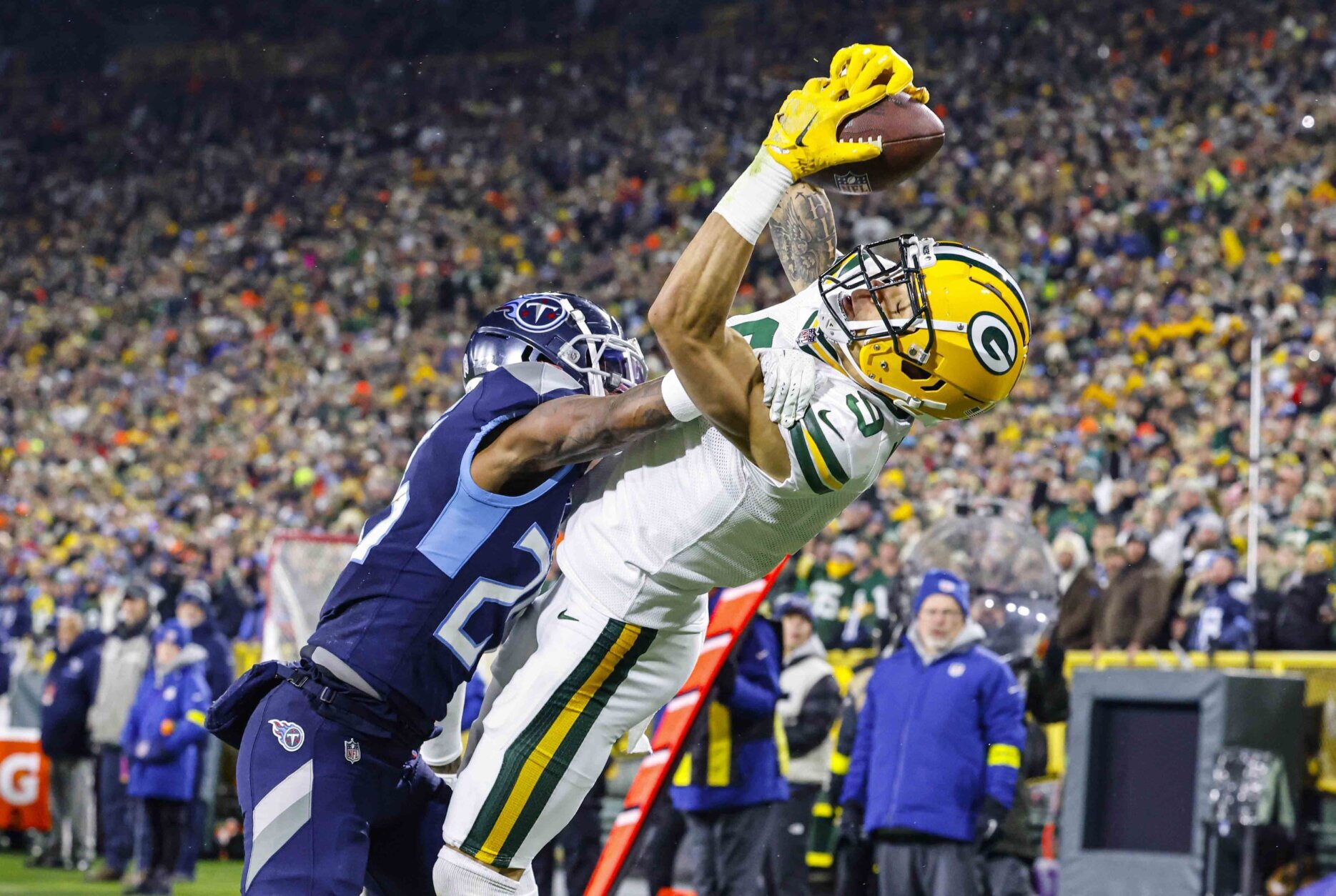 Green Bay becoming the NFL’s all-time winningest franchise didn’t happen but this did: Christian Watson is the first Packers rookie receiver to have multiple touchdown catches in consecutive games since Super Bowl I hero Max McGee in 1954. Let’s end the narrative that Aaron Rodgers doesn’t have any weapons.

Titans go with undrafted rookie kicker with Bullock out

Seahawks happy to be home for a while, set to host Raiders