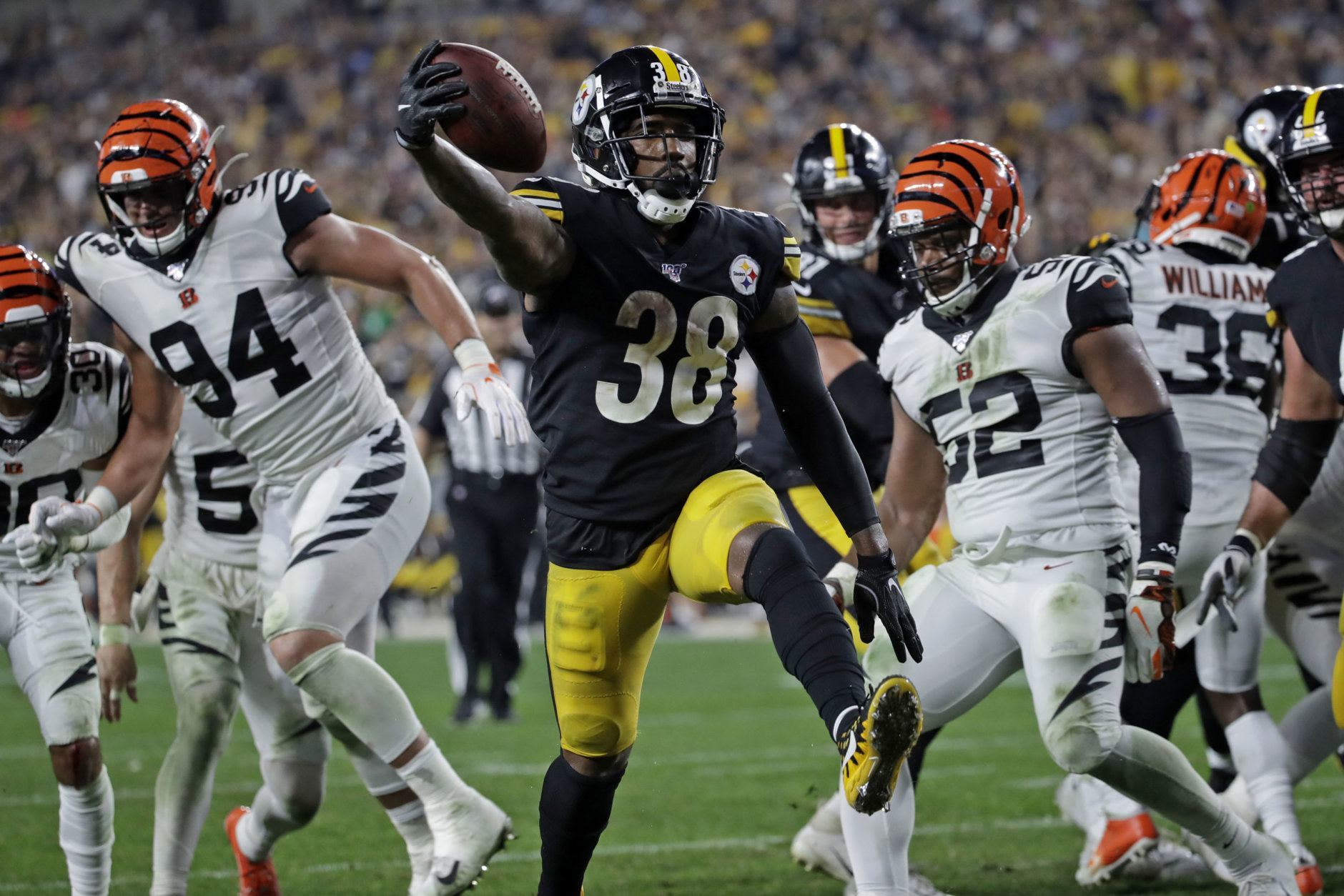 1/15
Pittsburgh Steelers running back Jaylen Samuels (38) scores on a 2-yard run during the second half of an NFL football game against the Cincinnati Bengals in Pittsburgh, Monday, Sept. 30, 2019.

From winless to just a game out of first place in the AFC North — crazy how much changed for Pittsburgh in just a week.

In the 100th meeting between these division rivals, the Steelers returned to form by getting more than twice as many sacks (8) as points allowed and Jaylen Samuels became the second player since 1970 to notch three completions, three catches and three rushes in a single game. They’ll need another effort like this next week to knock off the arch-rival Ravens. 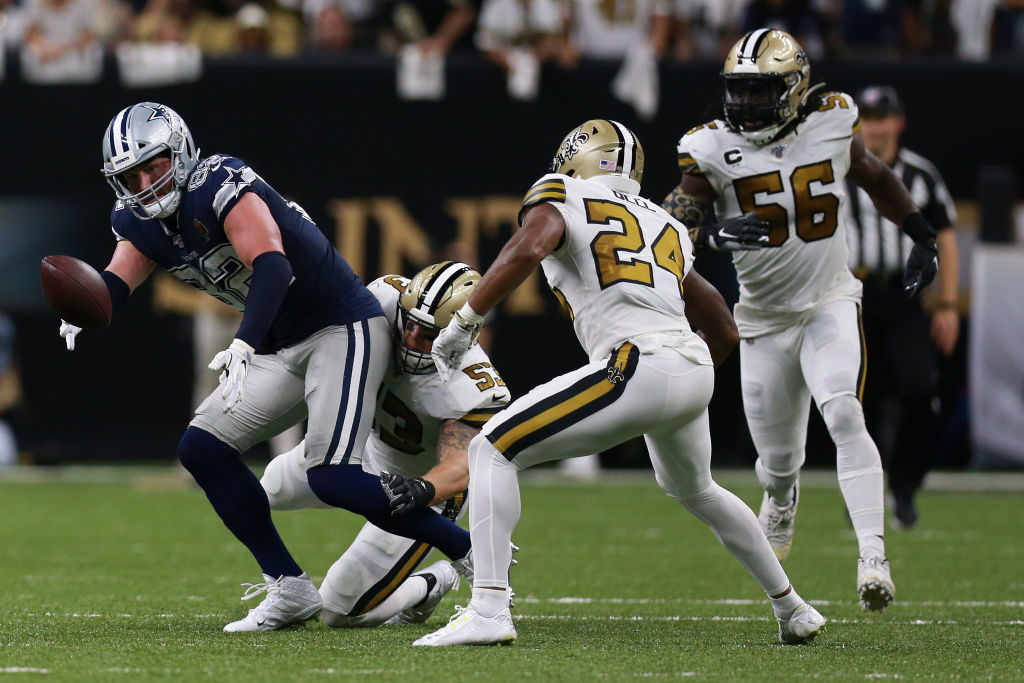 2/15
NEW ORLEANS, LOUISIANA — SEPTEMBER 29: Jason Witten #82 of the Dallas Cowboys stripped of the ball by A.J. Klein #53 of the New Orleans Saints during the first half of an NFL game at the Mercedes-Benz Superdome on September 29, 2019 in New Orleans, Louisiana.

New Orleans won a game without scoring a touchdown for just the fourth time in franchise history, and Dallas has now lost six of their last seven meetings with the Saints in the Superdome. If the Cowboys partied like the owner did down there, the reasons are apparent.

How many NFL owners would walk down Bourbon Street on a Saturday night. I’ll go with … just one pic.twitter.com/e9FZmWmruv 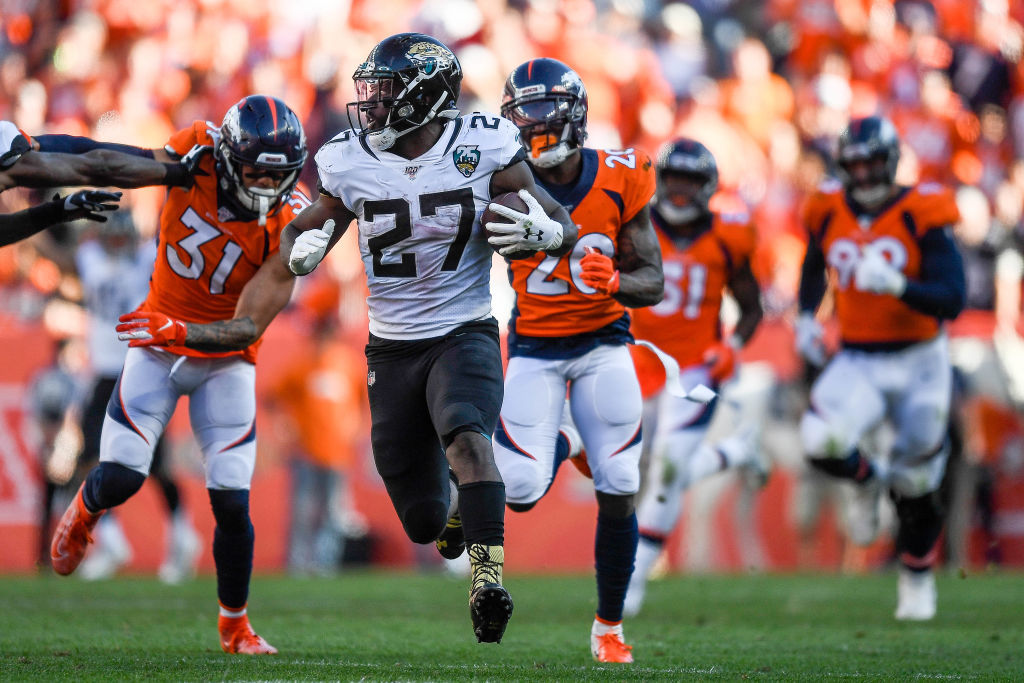 3/15
DENVER, Colo. — SEPTEMBER 29: Leonard Fournette #27 of the Jacksonville Jaguars carries the ball on a play that would go for an 81 yard run against the Denver Broncos in the third quarter at Empower Field at Mile High on September 29, 2019 in Denver, Colorado.

I know everyone is enraptured in Minshew Magic, but Leonard Fournette’s career-high 225 yards, the Ramsey-less defense’s first takeaway and some clutch kicking by Josh Lambo made Jacksonville look ready to contend in a division totally up for grabs. 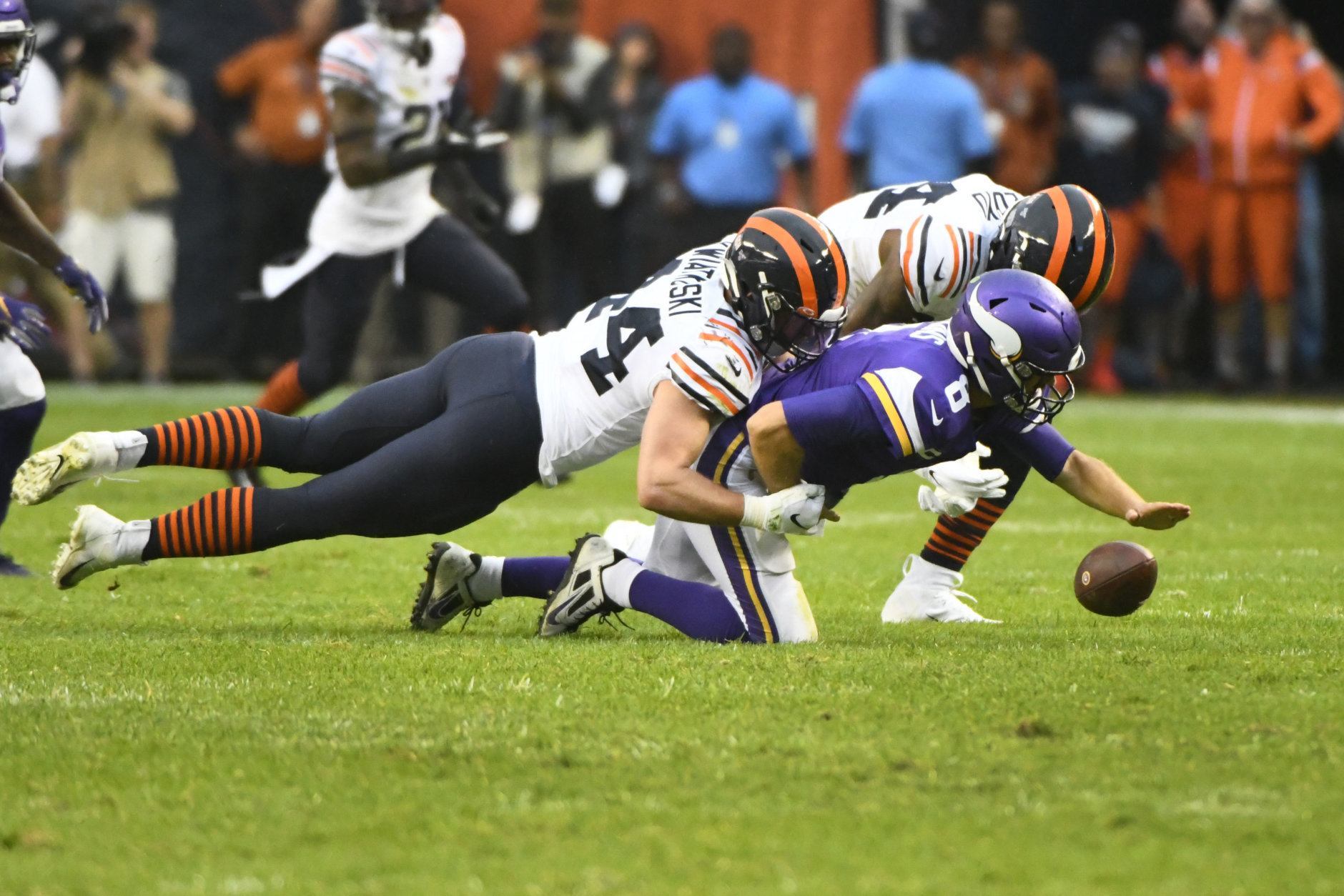 4/15
Minnesota Vikings quarterback Kirk Cousins (8) fumbles as he is sacked by Chicago Bears inside linebacker Nick Kwiatkoski, left, while Bears outside linebacker Leonard Floyd gets in on the play during the second half of an NFL football game Sunday, Sept. 29, 2019, in Chicago. The Vikings kept possession of the ball.

A week after an “Em-bare-ass-ing” blowout of the Redskins, the Bears mauled ex-Redskin Kirk Cousins for as many sacks (6) as points allowed. If Chicago ever gets anything from their QB — and Chase Daniel actually played better than the injured Mitch Trubisky has at any point this season — this is a threat to win a wide open NFC. 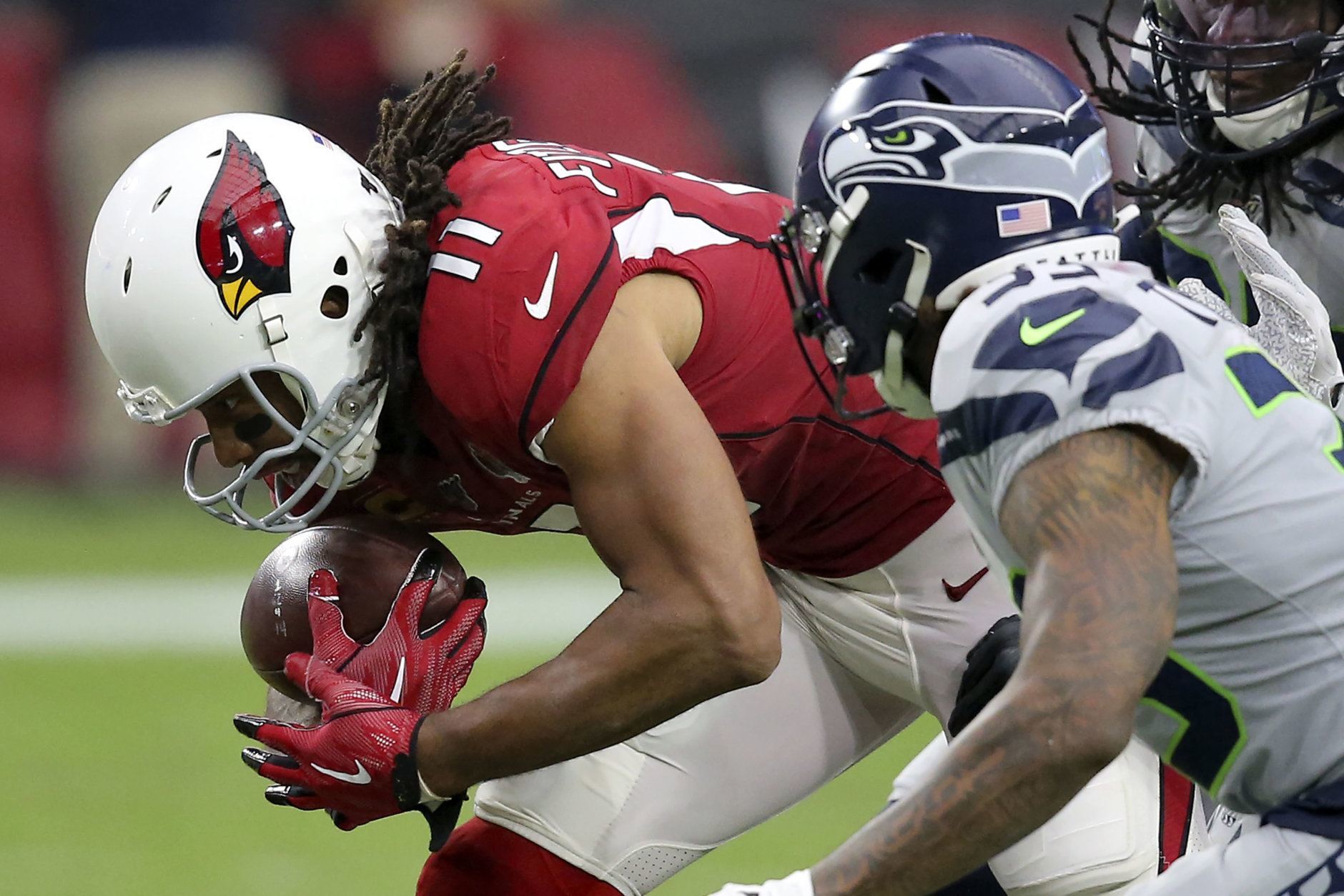 5/15
Arizona Cardinals wide receiver Larry Fitzgerald (11) catches his career 1,325 catch to tie Tony Gonzalez for second place on the all-time receptions list during the second half of an NFL football game against the Seattle Seahawks, Sunday, Sept. 29, 2019, in Glendale, Ariz.

Ladies and gentlemen, give it up for the NFL’s second-leading receiver, Larry Fitzgerald — the only thing that makes being an Arizona Cardinals fan feel not-so-bad. 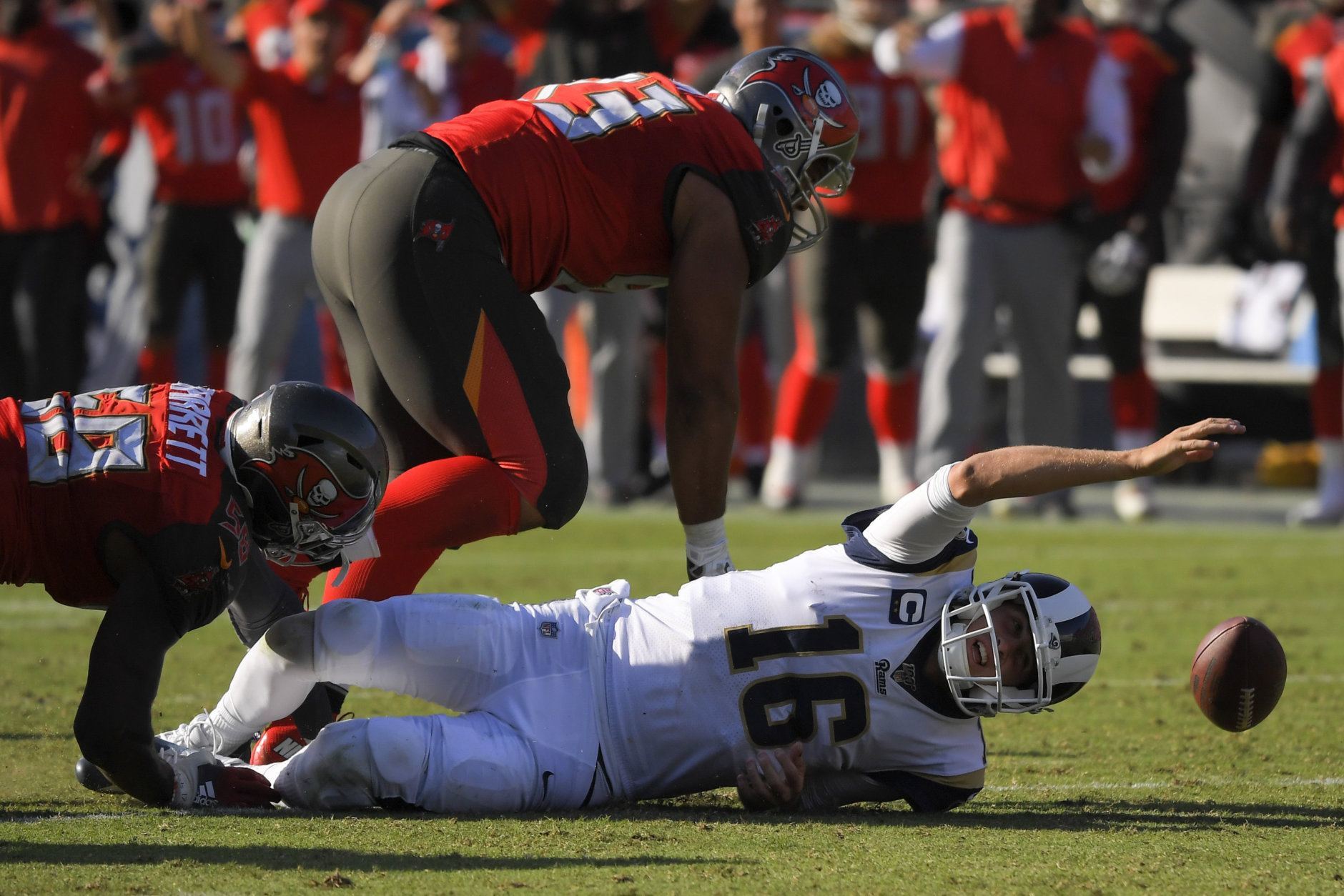 Jared Goff threw for the eighth-most yards in NFL history but he turned the ball over four times and his defense allowed the most points scored on the Rams in 63 years. Are the Bucs actually good or is this an aberration? We’ll find out in New Orleans next week. 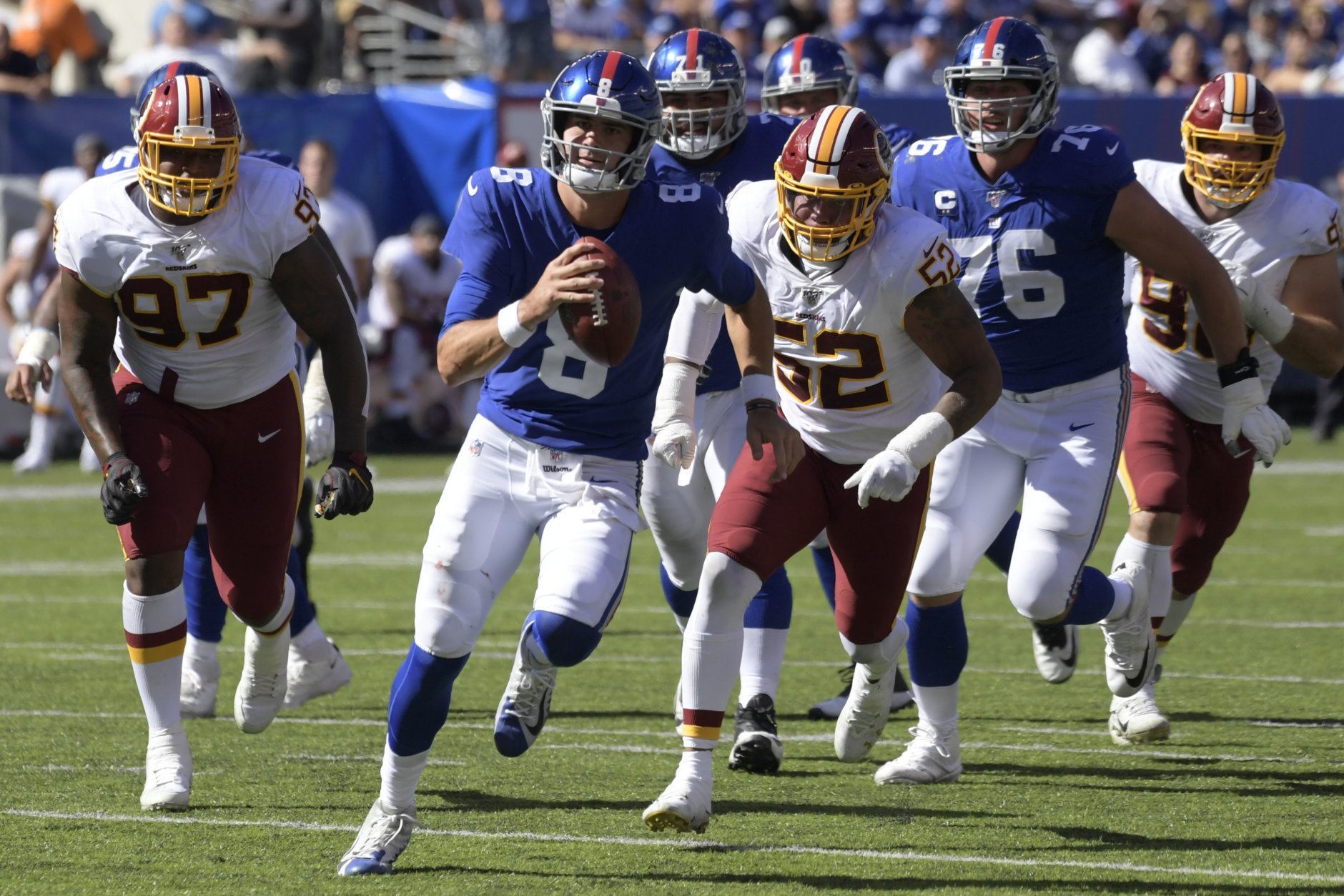 7/15
New York Giants quarterback Daniel Jones, second from left, runs the ball during the first half of an NFL football game against the Washington Redskins, Sunday, Sept. 29, 2019, in East Rutherford, N.J.

A week after jump-starting the Giants with his potty mouth, Daniel Jones became the first Giants rookie QB to win his first two starts since Phil Simms in 1979 … and on the same day fellow first-round rookie Dwayne Haskins became the first ‘Skins QB to throw a Pick-6 in his first career game since Stan Humphries in 1989. With the 4-0 Patriots set to invade FedEx Field, this already-miserable stretch will extend to 0-5 and Jay Gruden’s tenure will almost certainly end before a battle of winless teams in Miami. Book it. 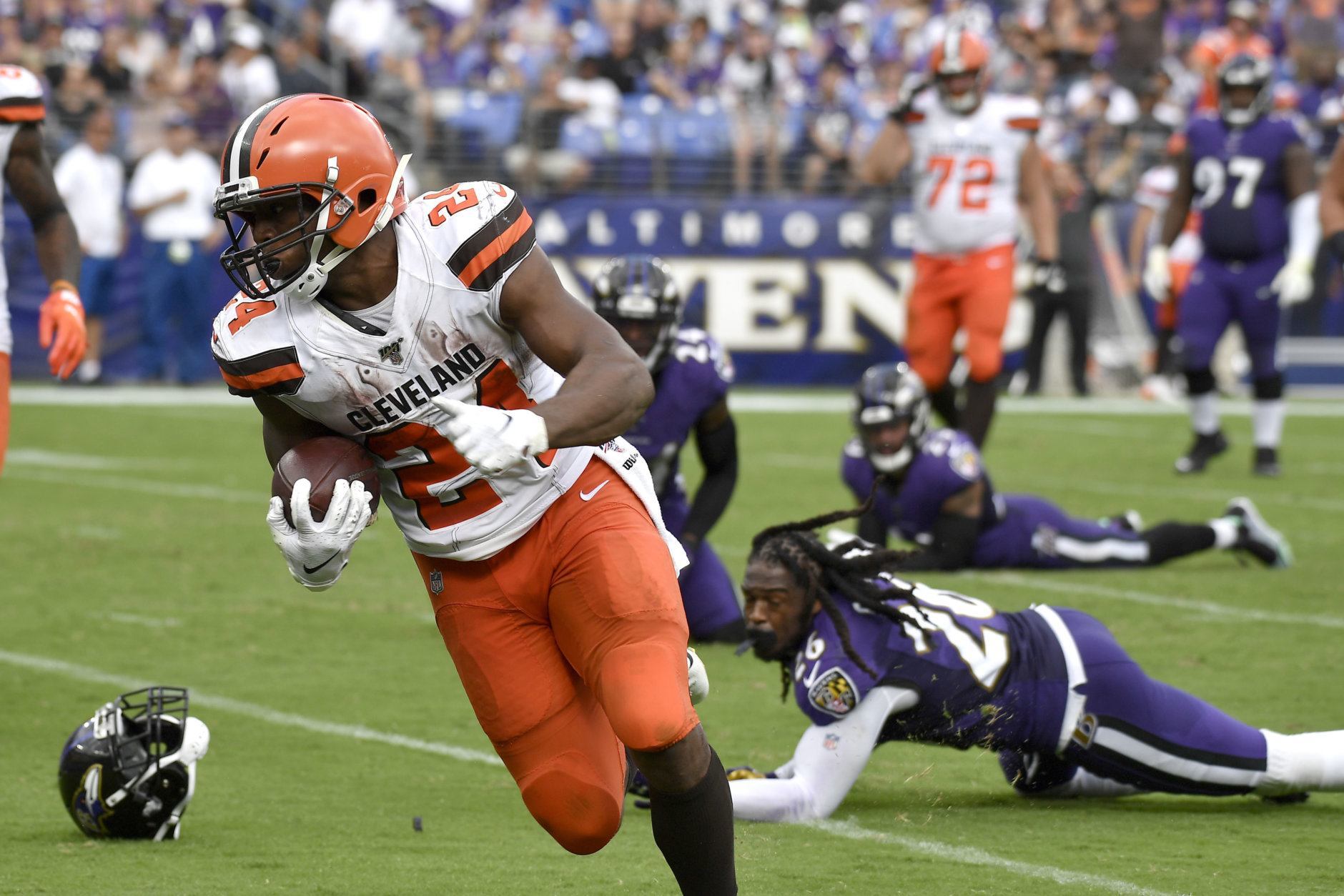 8/15
Cleveland Browns running back Nick Chubb (24) prepares to cross the goal line after avoiding several tackles from Baltimore Ravens defenders during the second half of an NFL football game Sunday, Sept. 29, 2019, in Baltimore.

Lamar Jackson’s franchise-best pick-less streak ended badly, but that may not even be Baltimore’s biggest concern: Cleveland ran it down the Ravens’ throats in historic fashion, which had the Ravens D quarreling among themselves after the game. If the Browns provided the blueprint for exposing Baltimore’s defense, it might be their division to win after all. 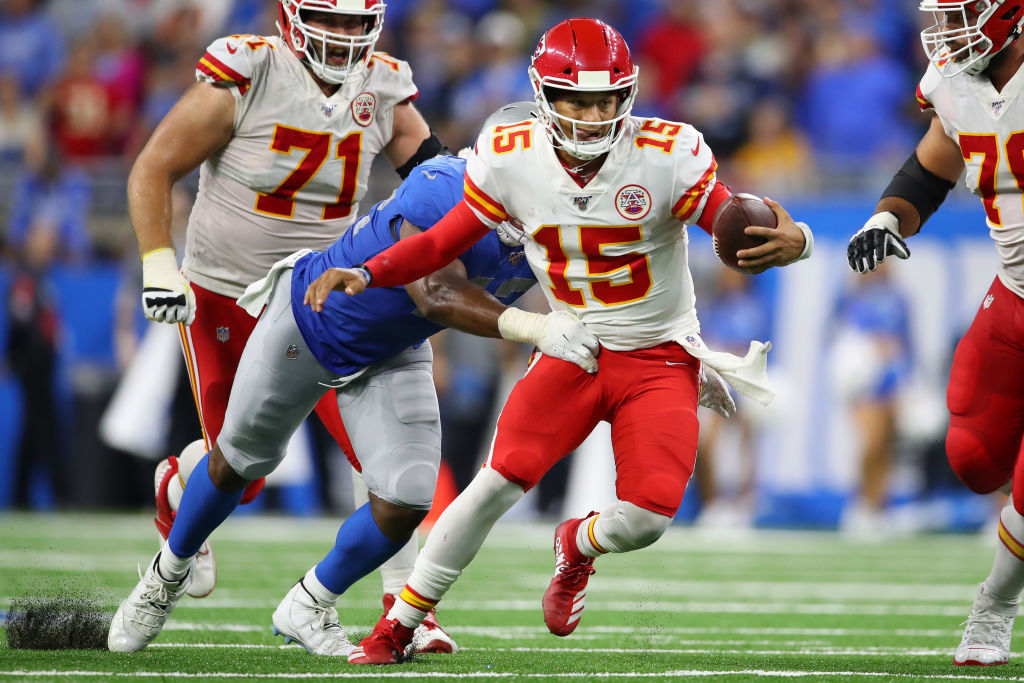 9/15
DETROIT, MICHIGAN — SEPTEMBER 29: Patrick Mahomes #15 of the Kansas City Chiefs runs for a fourth quarter first down while playing the Detroit Lions at Ford Field on September 29, 2019 in Detroit, Michigan.

Patrick Mahomes may have been held without a touchdown pass for the first time in his incredible career but he was still making ridiculous highlights (did you see the no-look run??) to lead the Chiefs their second straight 4-0 start with three road wins — even if it wasn’t a KC masterpiece. 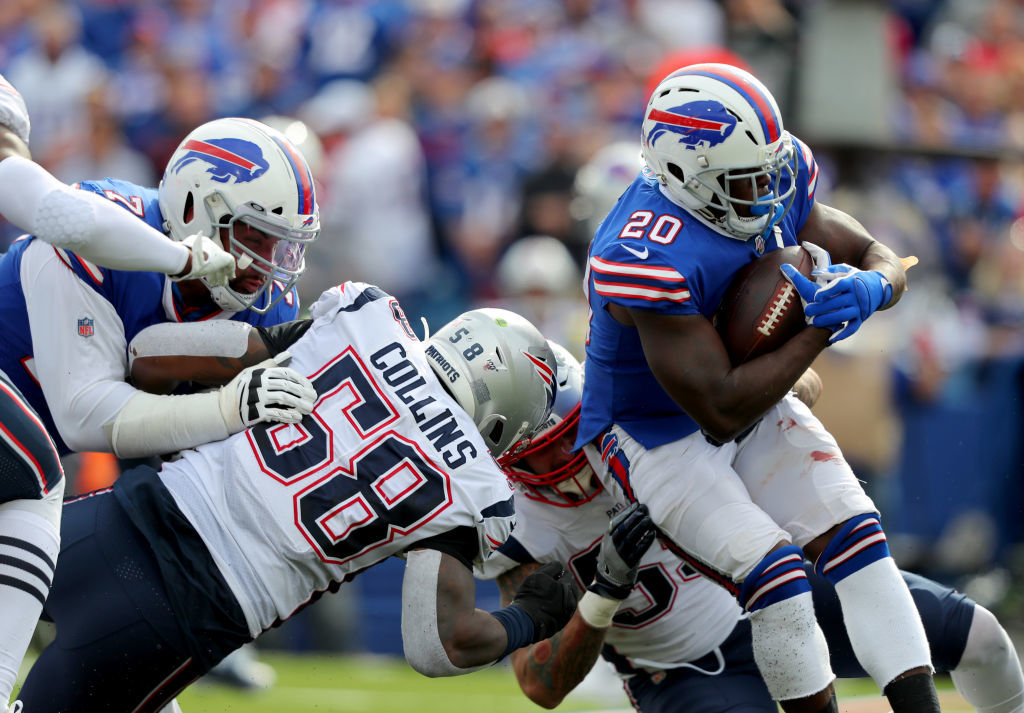 Give Buffalo credit: They’re the first team this year to score an offensive TD on the vaunted Patriots D, Frank Gore made history at their expense, the Bills defense made Tom Brady look like a 42-year-old QB playing on the road, and the sex toy streak finally ended even if Brady’s ownership of the Bills didn’t. Even in defeat, Buffalo looked like a serious wild card contender. 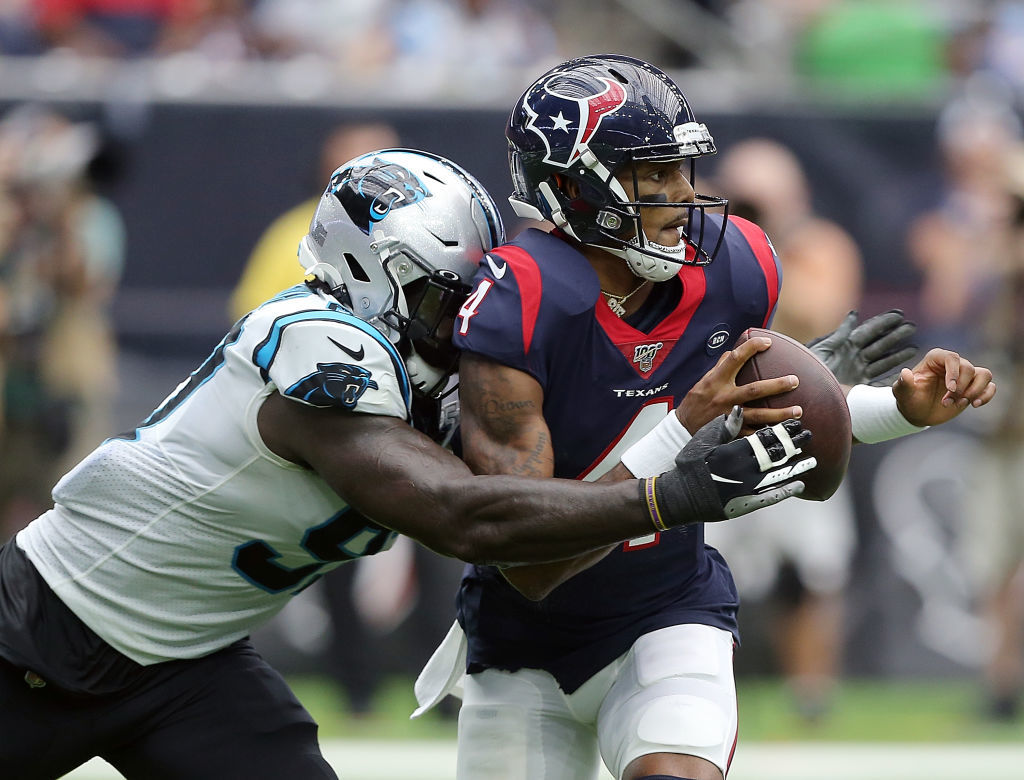 11/15
HOUSTON, TEXAS — SEPTEMBER 29: Deshaun Watson #4 of the Houston Texans is sacked by Mario Addison #97 of the Carolina Panthers during the first half at NRG Stadium on September 29, 2019 in Houston, Texas.

Houston’s season comes down to this: Will Deshaun Watson (sacked six more times Sunday) survive long enough for the Texans O-line to get its act together? 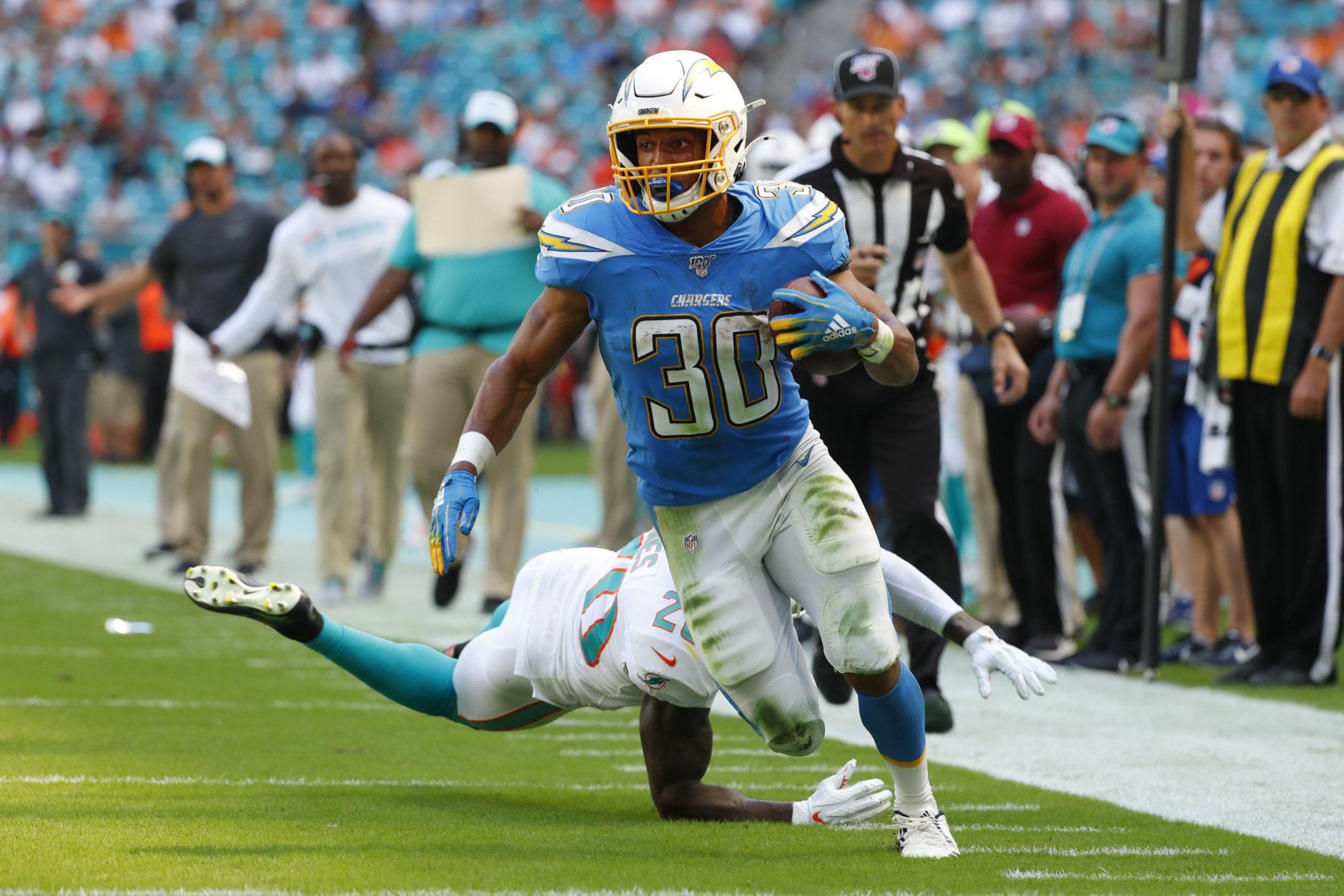 12/15
Miami Dolphins free safety Reshad Jones (20) misses a tackles as Los Angeles Chargers running back Austin Ekeler (30) runs for a touchdown, during the first half at an NFL football game against the Miami Dolphins, Sunday, Sept. 29, 2019, in Miami Gardens, Fla.

For those keeping score at home, Miami has been outscored 163-26 this season (the worst four-game point differential since at least 1940) and nobody in South Florida cares to watch this obvious tank-job. The Chargers’ first road win of the Dolphins since their iconic playoff matchup 37 years ago was basically a gift. 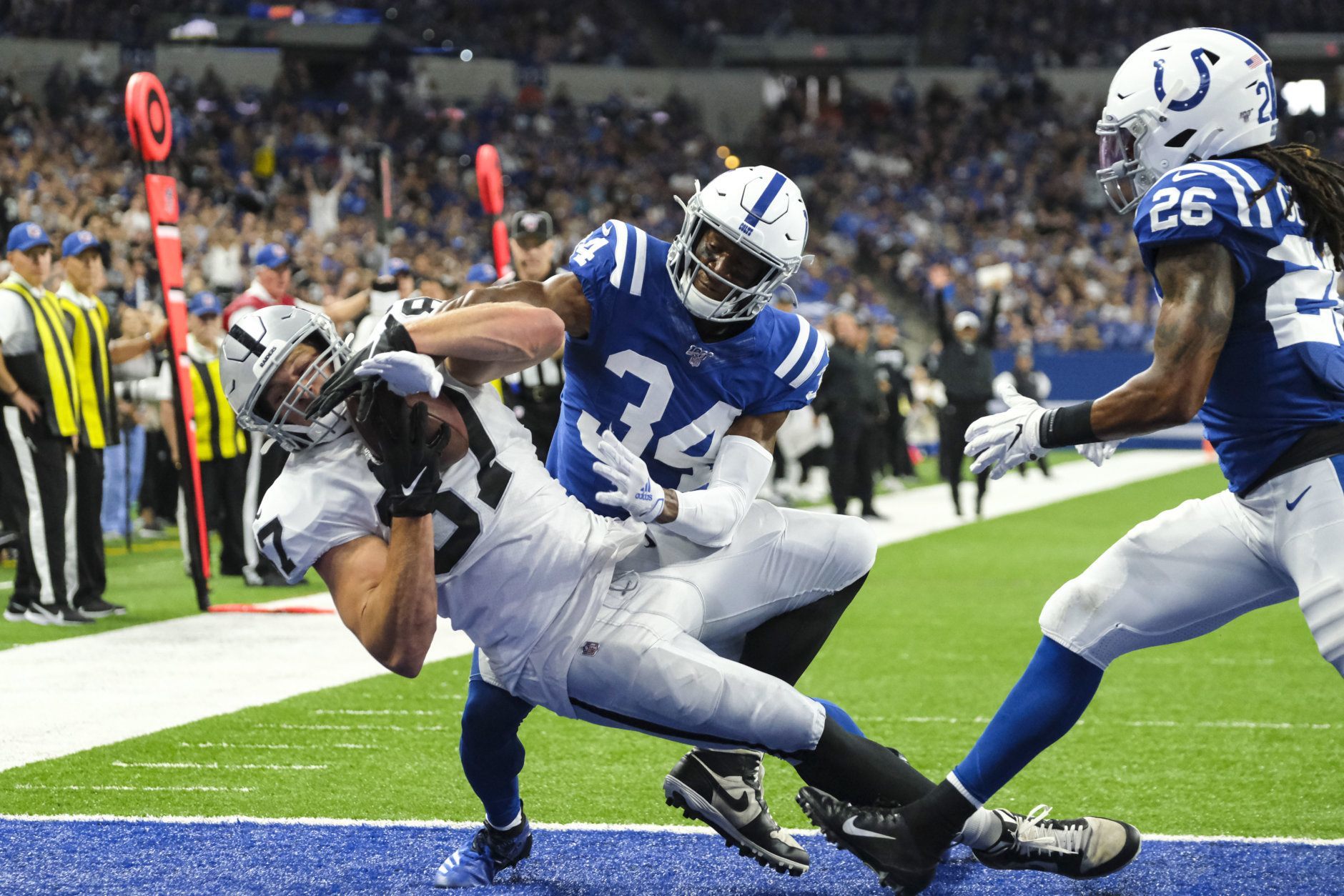 13/15
Oakland Raiders tight end Foster Moreau (87) makes a catch for a touchdown in front of Indianapolis Colts cornerback Rock Ya-Sin (34) during the first half of an NFL football game in Indianapolis, Sunday, Sept. 29, 2019.

I know it’s still early in the year … but I think this will go down as Indy’s worst loss of the season and Oakland’s best win. 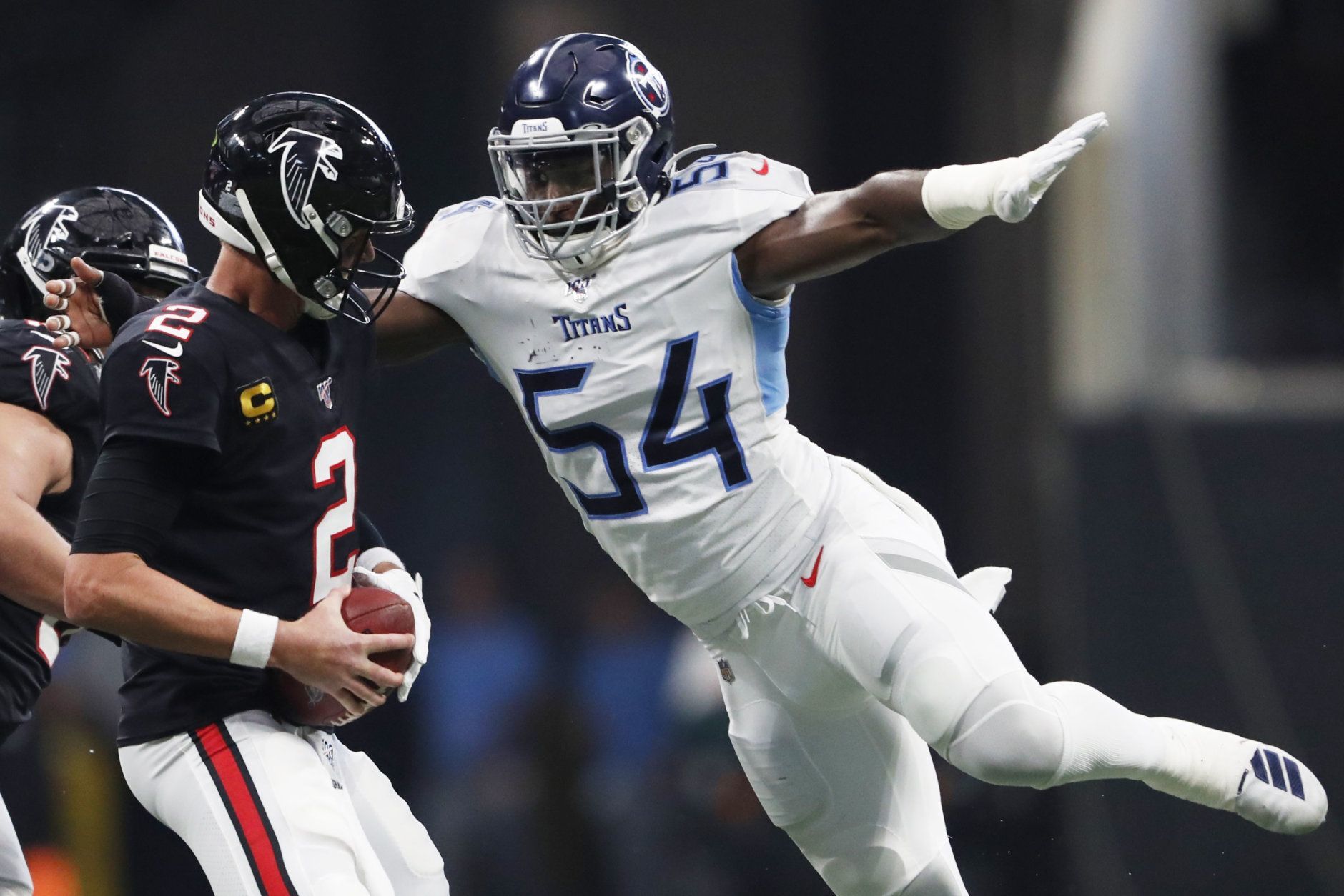 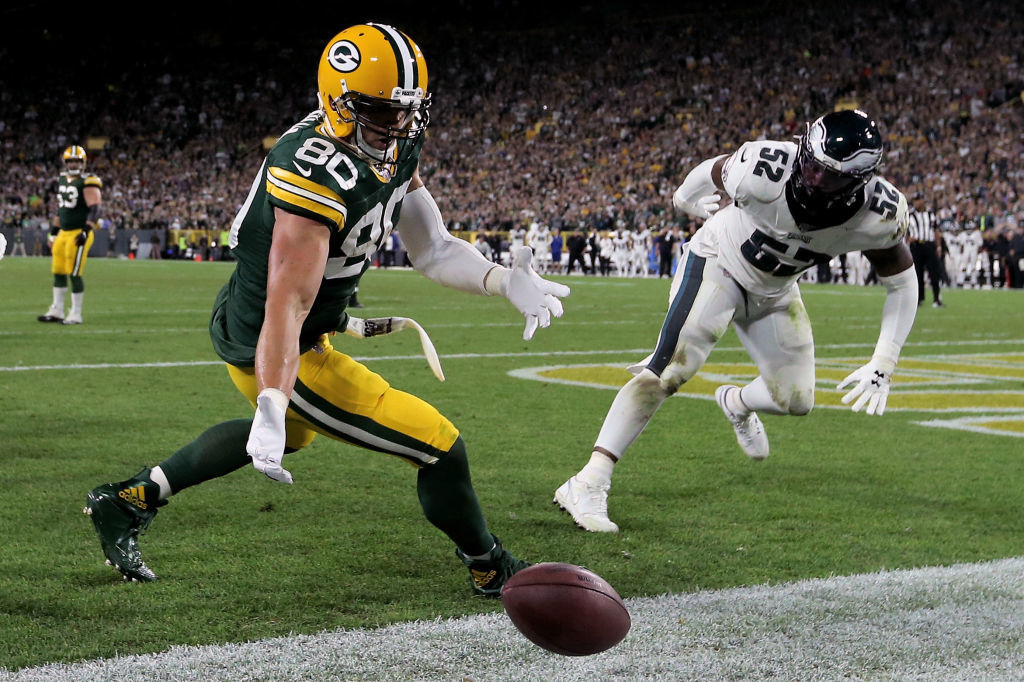 15/15
GREEN BAY, WISCONSIN — SEPTEMBER 26: Jimmy Graham #80 of the Green Bay Packers fails to make a catch while being guarded by Zach Brown #52 of the Philadelphia Eagles in the fourth quarter at Lambeau Field on September 26, 2019 in Green Bay, Wisconsin.

In a season in which they’ve been screwed by the underachieving Phillies, the Iggles stayed undefeated on Thursdays under Doug Pederson to save their season in a suddenly-competitive NFC East.

Meanwhile, Green Bay’s best offensive output comes with an asterisk; Aaron Rodgers’ four incompletions at the 1-yard line are the most by any QB in any quarter in the last 40 years, and this historic blown lead perhaps drives an even bigger wedge between him and his new coach. 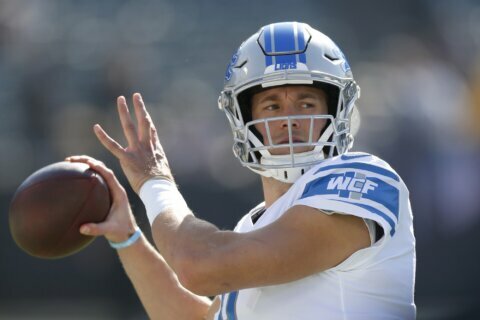 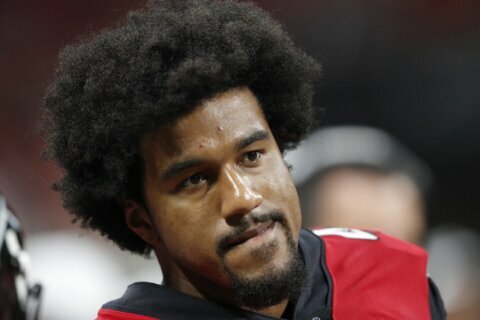