The symptoms of COVID-19 are fever, coughing and shortness of breath. Health officials say that if you have these symptoms, you should call your doctor. Do not just show up. Medical facilities need to get ready for you. If you don’t have a doctor and you live in D.C. or the nearby Maryland suburbs, D.C.’s mayor recommends calling the Testing Triage Center at 855-363-0333 or Mary’s Center at 844-796-2797. If you live in Virginia, call 211.

Judge rules in favor of some D.C. inmates who filed a lawsuit seeking early release

Inmates at the Central Detention Facility and Correctional Treatment Facility in D.C. will not be released but will be seeing changes in cleaning and safety precautions after a judge ruled in their favor in an opinion delivered Sunday.

The increasing number of virus cases led a judge to order two independent inspectors to make an unannounced visit at the Central Detention Facility and Correctional Treatment Facility.

CNN’s Jake Tapper started his discussion with Virginia Gov. Northam by playing video from President Donald Trump’s briefing on Saturday, where he said Northam was “under siege.”

Northam started by hitting back at Trump, saying the President has been unable to deliver on a comprehensive testing plan for the U.S.

On #CNNSOTU with @jaketapper, @GovernorVA says it’s “delusional” to claim that the US has enough tests https://t.co/XFT3iD2Dns

He noted that the United States is fighting a “biological war” without needed supplies. Northam commended his fellow state executives on working together as best they could based on a competitive environment for testing kits, PPE and other supplies essential for combating the virus.

As far as the recent assertion by the Trump administration that states have enough testing capacity to get a handle on how widespread the virus is, and that they should be able to start moving forward to opening the economy beyond essential businesses, Northam had a forceful response.

“Jake, that’s just delusional to be making statements like that. We have been fighting every day for PPE and we’ve got some supplies now coming in. We’ve been fighting for testing.

“It’s not a straightforward test. We don’t even have enough swabs, believe it or not, and we’re ramping that up, but for the national level to say that we have what we need and really to have no guidance to the state levels, is just irresponsible, because we’re not there yet.”

Northam called the response to the pandemic from regular people in Virginia “unbelievable.” As soon as the state can get a handle on the health crisis, he said, he will dedicate his efforts to the financial crisis.

Tapper pushed Northam to address his legislature’s efforts to control gun access in the state, and Northam pointed out that Virginia has suffered some of the most dramatic examples of gun violence in the country, pointing to the shootings at Virginia Tech in 2007 and on Memorial Day weekend in Virginia Beach last year.

“I’ll be glad to talk about gun violence and what we’ve done,” Northam said, deflecting the conversation back to the coronavirus pandemic.

“But it’s time for Virginia, for this country to come together and address the lives that we are losing every day and to try to put this health crisis behind us.”

Tapper moved forward to ask Gov. Northam, a doctor, about some of the criticism he received recently that he was slow to close down the state in the early phases of the virus outbreak.

In their conversation, Northam said he believed he took aggressive steps, and while the number of cases and deaths in Virginia seems to be slowing recently, he wants to see a more significant trend of the numbers decreasing before he can think about reopening the state’s economy.

Maryland Gov. Larry Hogan spoke with CNN’s Jake Tapper on Sunday morning. He was initially asked about whether he believed the next phase of legislation in congress should address states’ financial concerns in the fight against coronavirus.

Hogan said while governors nationwide are concerned about having more funds directed their way, they do not want to stand in the way of funding small businesses that are in danger of going bankrupt.

“I don’t think the deal is finalized yet,” Hogan told Tapper, expressing optimism that the current funding bill in congress could still offer some relief for states.

Tapper also asked Hogan about the “desperation” many constituents feel about the coronavirus-induced financial crisis, evidenced by the snarled traffic that came with the MegaMart food giveaway on Friday.

.@GovLarryHogan tells @jaketapper on #CNNSOTU that is it “absolutely false” to blame governors for the lack of testing https://t.co/c2oOlP6UJ5

“My goal is to try to get us open as quickly as we possibly can, but in a safe way,” Hogan said.

“The president’s own guidelines say that you should have 14 days of declining numbers before you start to consider phase one of a reopening and we have increasing numbers every day here in the Washington-region.”

Protesters drove through Annapolis on Saturday, asking that Hogan reopen the state’s economy.

Hogan said he does not believe it is smart for the president to be fomenting protests on social media when it is clear states are not ready to move forward.

Hogan also countered the Trump administration’s stance that testing capacity has increased to the point that states should be able to start moving into “phase one” of reopening their economies.

At the moment, Maryland’s schools are closed at least until May 15.

“I think this is probably the number one problem in America and has been from the beginning of this crisis: the lack of testing,” Hogan said.

“To try to push this off to say … that somehow [governors] aren’t doing our job is just absolutely false. Every governor in America has been pushing and fighting and clawing to get more tests.”

Tapper asked Hogan, in closing, whether he could have taken better advantage of a coronavirus panel he attended in early February about the potential ramifications of the outbreak.

It was part of the National Governors’ Association winter meeting. Hogan said he left the discussion, which included Dr. Anthony Fauci, “very, very concerned” and that he knew the virus outbreak would be a “serious crisis.”

The U.S. Army Corps of Engineers, Baltimore District, has issued a contract in concert with the District to convert the Walter E. Washington Convention Center into a facility that can support up to 1,500 “low acuity” patients by the end of May.

The first phase of construction is scheduled to be delivered in early May with 500 beds becoming available for COVID-19 patients who do not require a ventilator or critical care. By the end of the month another 1,000 beds will be available.

D.C. Mayor Muriel Bowser said she hopes she does not have to use the full capacity of the convention center.

“We must have the capacity to support a potential increase in COVID-19 patients,” Bowser said in a news release published on Sunday.

Site surveys in March made by the Corps of Engineers found the convention center’s three main halls, totaling 473,000 square feet, acceptable for use as a medical space.

In concert with the construction plan, the District is launching emergency parking restrictions in the area around the convention center starting on April 21 at 12:01 a.m. This includes the curb lanes closest to the building in addition to L Street NW, between 7th and 9th Streets NW as it passes below the convention center’s walkway, and the lanes closest to the building along 7th and 9th Streets south of M Street NW.

See a map of the closures below.

A Sunday morning order from Maryland Gov. Larry Hogan could result in the early release of some inmates in the state. This comes as the state tries to stop the spread of the COVID-19 in correctional facilities.

The order calls for the corrections officials in the state to speed up the process for placing inmates with fewer than four months left on their sentences on mandatory supervision. Inmates eligible for home confinement will also be considered for it as part of the order.

Hogan also wants to see inmates convicted of nonviolent crimes who are over the age of 60 years old and have clean behavior records while behind bars to be considered for parole.

The Charles County, Maryland, Department of Health said Saturday there are 101 known cases of the coronavirus in nursing homes and assisted living facilities throughout the county, including at Sagepoint Nursing and Rehabilitation Center.

Md. protesters demand all businesses in the state reopen

Protesters drove through the streets of Annapolis, Maryland, on Saturday afternoon to urge Gov. Larry Hogan to reopen all businesses closed because of the coronavirus pandemic.

Hundreds of cars participated in the protest near the statehouse to oppose the state guidance aimed at preventing the spread of the coronavirus.

More than 1,700 people have signed an online petition for the event, which was organized by the group Reopen Maryland.

Protests have been organized across the country to push back on stay-at-home orders. 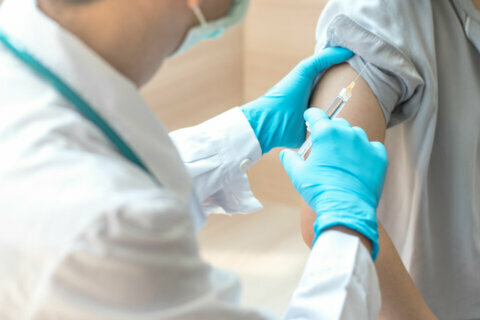