The giveaway was advertised on local Spanish-language TV stations as a thank you for Megamart customers. The grocery chain is particularly popular with Latino consumers in the DMV area.
Listen now to WTOP News WTOP.com | Alexa | Google Home | WTOP App | 103.5 FM

In a sign of the times, a local grocery chain saw locations flooded with hundreds of people on Friday after announcing a two-hour giveaway of food staples including rice, oil and milk, WTOP news partner NBC Washington reports.

The giveaway was advertised on local Spanish-language TV stations as a thank you for Megamart customers. The grocery chain is particularly popular with Latino consumers in the DMV area.

Per NBC Washington, “hundreds lined up around the parking lots and far down the streets at seven [Megamart] locations, including Chillum, Rockville and Takoma Park in Maryland, and Arlington, Virginia.“

Police and county health officials were on scene to maintain order and attempt to enforce social distancing measures, but the sheer number of people on scene made the latter nearly impossible.

WTOP traffic reporter Dave Dildine was following the backup in Riverdale, Maryland, just north of Washington, D.C. He said traffic extended in all four directions from the intersection of Kenilworth Avenue and Maryland Route 410.

“We tried to encourage drivers engaged in essential travel nearby to offer caution and respect for the hundreds of pedestrians in crosswalks and on sidewalks, many of whom were in great need,” Dildine said.

He said the lines of pedestrians and vehicles showed us what “bread lines look like in the year 2020.”

“We all know that we have large immigrant populations here [who] do not qualify for unemployment,” Elrich said. “And if they’re jobless, they’re not working and bringing home a paycheck.”

NBC Washington reports that Maryland locations began offering $30 store vouchers after the crowds grew to unmanageable size. Megamart has said it plans to spend $500,000 on the effort.

See the location of one of the traffic jams below. 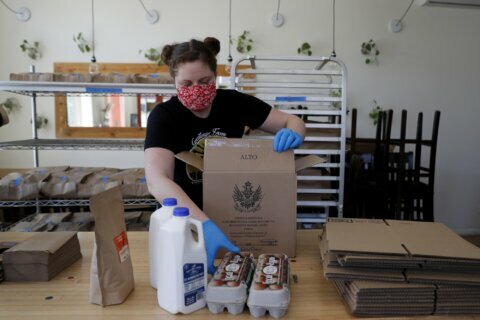 US restaurants turn to grocery sales to help offset losses