Watch for icy patches on sidewalks and roads

Even though the D.C. area saw itself thaw out Monday after a major snowstorm over the weekend, overnight subfreezing temperatures have likely refrozen what has melted, and Tuesday's morning commute is expected to be a slippery, chilly one.
Listen now to WTOP News WTOP.com | Alexa | Google Home | WTOP App | 103.5 FM

WASHINGTON — Even though the D.C. area saw itself thaw out Monday after the weekend snowstorm, subfreezing temperatures overnight froze everything that melted, making for patches of black ice and some mass transit delays.

Federal offices will open with a two-hour delay, the Office of Personnel Management said. This status does not apply to furloughed employees.

1/15: Federal agencies in the DC area will OPEN with a 2-hour delay on Tuesday, January 15, 2019. Employees should plan to arrive for work no more than 2 hours later than they would be expected to arrive. Employees should visit https://t.co/XNpFS40aXT to confirm their status. pic.twitter.com/drRG2rzDet

A number of school systems across the region announced delays Tuesday. Some school systems in Virginia will still be closed. In Maryland, public schools in Prince George’s and Montgomery counties will open with a two-hour delay.

In Virginia, Arlington Public Schools will be closed Tuesday. Public schools in Culpeper, Fauquier, Stafford, Spotsylvania and Rappahannock counties are closed, as are public schools in Fredericksburg City.

“Lows will range from the upper teens in suburbs to the middle 20s in D.C., so there will be plenty of icy spots, especially secondary roads, bridges, overpasses and off/on ramps,” NBC Washington meteorologist Steve Prinzivalli said. Icy patches will be on sidewalks and in parking lots, so walk with caution. 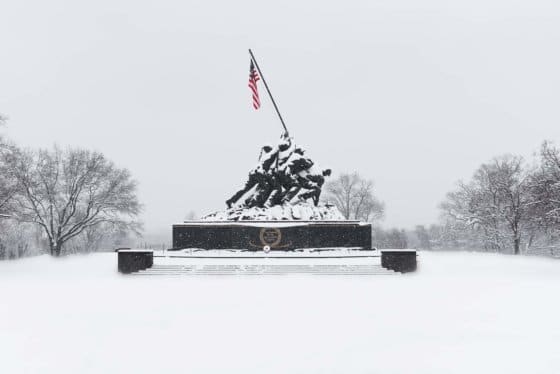 See photos as the D.C. region endures the first snowstorm of the year.

“Slick road conditions will be possible, especially on secondary routes carrying less traffic, and on hills and curves,” the Virginia Department of Transportation said Monday afternoon.

The Maryland State Highway Administration’s John Schofield said drivers need to do their part by driving defensively. Go slow, he told WTOP listeners — and clean off all the snow and ice before you start moving.

“If you haven’t been out in a couple of days, you’ve got a pretty good layer of snow on the top of your car,” he said. “That’ll become a projectile if you don’t brush it off.”

Schofield said that neighborhood roads were more likely to ice over than the region’s larger highways.

Metrobus service returns to normal Tuesday morning. Metrorail service Monday was not impacted by the weather. MetroAccess ran as usual but with delays.

Virginia Railway Express and MARC service are operating on a full schedule Tuesday.

Fairfax Connector will run on a regular weekday schedule Tuesday.

ART will operate normal weekday service, but delays are possible on routes 45, 75 and 77 depending on road conditions.

“Following this past weekend’s major snowstorm, a dry and chilly weather pattern is on tap for the middle of the workweek before it turns unsettled late-week and into the weekend,” said Prinzivalli.

Temperatures will continue to fluctuate above and below freezing the next few days, Storm Team 4 meteorologist Matt Ritter said.

See the snow totals in the D.C. area.

After digging out after the record-setting winter storm, which dropped nearly a foot of snow, winter is far from over — and forecasts were highlighting the possibility of more wintry weather late this week.

“We still have two quiet weather days in front of us to recover, once and for all, from the weekend snowstorm,” NBC Washington chief meteorologist Chuck Bell said.

Two more storm systems could impact the area before the week is out, the next chapter in what forecasters are calling an “active pattern” of low-pressure systems moving through a freezing air mass descending from subarctic Canada.

The first will likely be a rain event starting Thursday evening, with a short-lived wintry mix possible early Friday — especially in the Shenandoah Valley and Northern Maryland. Still, even a brief icing could cause travel woes for Friday morning commute, and Bell said this storm will need to be monitored carefully as it forms over the next two days.

Yet another weekend storm is looking to be the larger of the two — though Tuesday’s model runs had trended away from an all-snow event in favor of rain or a wintry mix starting Saturday night and lasting through Sunday.

“As Arctic air dives into the middle of the country, warmer air will be pushed up the East Coast,” Bell said. “This should keep most of the area above freezing Saturday night but we still can’t rule out at least some ice or sleet in the pre-dawn hours of Sunday morning.”

Regardless of what happens, that system will give way to a strong northwesterly wind that could bring with it some of the coldest air of the season next week.

FRIDAY: Chance for some morning rain/snow showers, then clearing and milder.
Highs: mid-40s 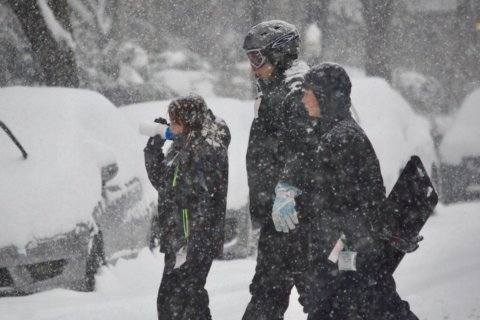 Snow totals in the DC area 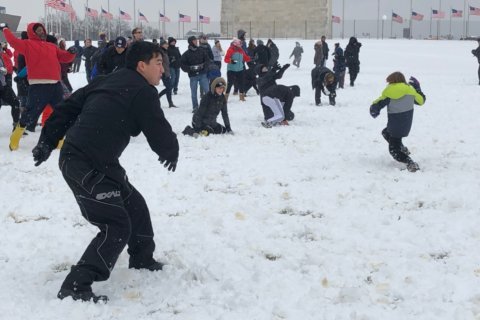 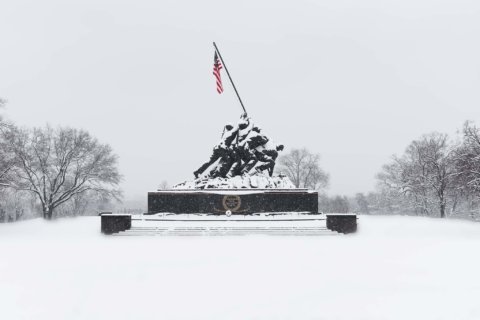