Some people get excited when they wake up to a fresh blanket of snow. They dream of making snow angels, building snowmen, or even just watching the flakes fall from the warmth of their home. Others prepare for battle. See photos.
Listen now to WTOP News WTOP.com | Alexa | Google Home | WTOP App | 103.5 FM

WASHINGTON — Some people get excited when they wake up to a fresh blanket of snow. They dream of making snow angels, building snowmen or even just watching the flakes fall from the warmth of their home.

Others prepare for battle.

For years, people have been spending their snow days gathering near D.C.’s historic landmarks for massive, epic snowball fights. The first snow of 2019 wasn’t any different, as dozens flooded the National Mall and took sides, chucking packing snow at each other in a battle royale for Washington Monument supremacy.

“It is cool when there are so many people around,” said Claire. “Instead of just, like, four people having a snowball fight, it’s like a hundred. So a little more intense.”

“I’m from Arizona, and I’m not used to snow,” said Greg, who was foolishly wearing tennis shoes. 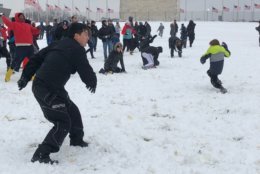 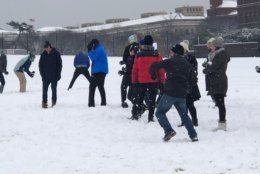 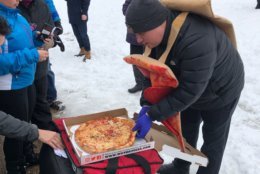 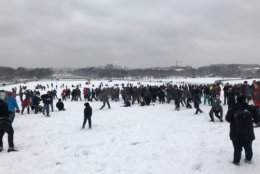 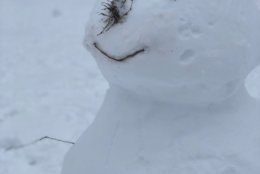 From kids, to adults pretending to be kids, all were welcome Sunday afternoon. One woman was dressed as a unicorn. Another man had a snowball molder to get the perfect sphere every time. Three members of the U.S. Park Police joined in, lobbing snowballs from afar and being good-natured as the unsuspecting victims returned fire. We The Pizza sent free pies.

Some of the warriors were furloughed government workers while others were unaffected by the current shutdown, but all wanted to gather and lose themselves in fluffy magic for the afternoon.