Bradley Beal signed a contract extension with the Wizards before the 2019-2020 NBA season to demonstrate a commitment to Washington and now, it is up to the team to continue making progress.
Listen now to WTOP News WTOP.com | Alexa | Google Home | WTOP App | 103.5 FM
(1/5) 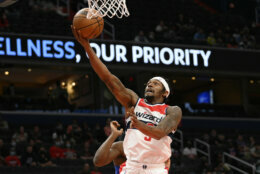 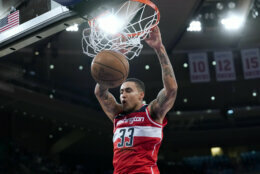 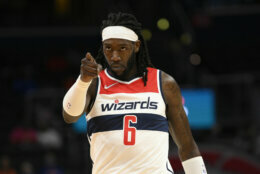 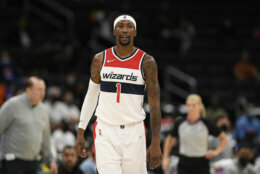 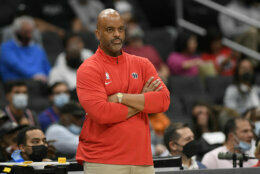 Bradley Beal signed a contract extension with the Wizards before the 2019-2020 NBA season to demonstrate a commitment to Washington — and now, it is up to the team to continue making progress.

When Beal decided to extend his stay in D.C., he was part of a backcourt with John Wall. The guard combination of Beal and Wall led the Wizards to the brink of the Eastern Conference Final in 2017, but that seems like a distant memory. Wall was traded to Houston before the start of last season for Russell Westbrook.

After a memorable season in Washington, which included breaking Oscar Robertson’s record for career triple doubles, Westbrook was sent to the Lakers in exchange for Kyle Kuzma, Montrezl Harrell and Kentavious Caldwell Pope. It was part of a busy offseason for the Wizards, which included the acquisition of point guard Spencer Dinwiddie in free agency from the Brooklyn Nets.

“I think this team right here is something that Bradley’s been hoping that we would get to,” said Wizards general manager Tommy Sheppard. “From where we were a couple years ago, when he signed his extension with us, to where we are now, it’s a new look. When I took over, we sat there across from each other and talked about what we can do to move forward. He has always bought in.”

Beal has become a superstar in the NBA, the face of the Washington franchise and the Wizards’ leader. Last season, Beal was second in the league in scoring at 31.3 points per game. He will now will form a backcourt with Dinwiddie, whose stock was on the rise, but a knee injury limited him to only three games last season with the Nets.

“The elephant in the room is keeping our cornerstone, Bradley Beal, in the building by winning,” said Dinwiddie. “I am focused on that and proving this organization right by taking a chance on me. I believe maybe in two years it is possible to become a true contending team in a major city that has a political backdrop, and that would be phenomena. For us to be a staple in the NBA, there’s no reason we shouldn’t be.”

The future of Beal in a Wizards uniform is a much talked about subject in NBA circles. He can sign another extension before the end of October, although it is likely he will wait. At the end of the 2022-2023 season, Beal has an option to become a free agent, but there is no indication his desire to be part of the Wizards solution has changed

“I want to win and I want to win the right way and do it here,” said Beal. “I think we have enough, so it’s just we have to get it done and continue to push. I’ll push myself and hold myself to a higher standard. I criticize myself more than anybody so I’ll be ready to go. I just have to make sure my team is locked in and we’re ready to go on a nightly basis.”

With the offseason firing of Scott Brooks as head coach, it is easy to forget Washington was a playoff team last season. The Wizards were the first team in 25 years to make the postseason after being 15 games below .500. It was not enough to save Brooks job, and Wes Unseld Jr. was hired as the team’s new head coach in July.

Unseld is the son of franchise legend Wes Unseld, who not only is a Hall of Famer but also on the league’s 50th anniversary was named as one of the 50 greatest players of all time.

Still, the younger Unseld paid his dues and started with the Wizards as an intern before moving on to advance scouting and assistant coach roles. He then became an assistant coach in Golden State, Orlando and finally Denver, where he helped the Nuggets become a contender in the Western Conference.

“I know the fan base in this town is craving a winning a winning atmosphere and a team that is going to compete and fight and do what they need on the floor to eke out a win,” said Unseld. “They also want to see a team that’s going to play together.”

Fans in D.C. also want to see the Wizards become a better defensive team. Last season, the Wizards were third in the NBA in scoring at 116.6 points per game, but were dead last in defense and allowed over 118 points a game. With Denver, Unseld developed a reputation for making the Nuggets better on defense. The Nuggets finished last season eighth in the NBA only allowing a little over 110 points per game.

“I think the overall thought of it being a mindset,” said Unseld. “It is not just on one person. This   has to be a part of who we are and what we are on a daily basis. “I think we lay that foundation and guys buy in, you’ll start seeing the benefits of that.”

There is no magic formula for becoming a better defensive team in the NBA. The Nuggets made great strides, but not with players who are defensive minded. As much as offensive success is about the ability of teammates to connect, the same is true on defense.

“Once we are able to develop a chemistry on defense and we truly become a unit then defense will be easy,” said Caldwell-Pope. “When one guy makes a mistake then we have to another guy ready to be the next guy and help out. Defense is a chain reaction and the more that the chain stays together, the more, the better we can be.”

Getting better on defense is priority No. 1 for the Wizards. On offense as noted, the Wizards can keep pace with any team. Now, it is about accountability on the defensive end, and that does not mean expect a dramatic change.

“In the NBA, there is an incredible amount of pick and rolls every night now we have to defend them,” said Sheppard. “We can do better in transition D, and we have to stop fouling and putting people on the free-throw line. We solve some of those riddles and we will be much better defensively. It can be just about improving on one or two possessions each game.”

With the arrival of Kuzma, Cadwell-Pope, Harrell and Dinwiddie, the Wizards have more options this season. Off the bench, point guard Aaron Holiday and first-round draft pick Corey Kispert impressed in preseason. Washington has more shooters and playmakers which, in theory, should take some of the pressure off Beal to lead the team in scoring.

“The flexibility and depth we have is really exciting,” said Unseld.  “We have so many options. We can play small. We can play big. We can bump guys down. We have multiple ballhandlers who can create finish, and the amount of shooting we can put on the floor is a tremendous dynamic to have. I think it also allows you defensively to do a lot of different things.”

In addition, the Wizards believe they have assembled the right collection of players. To be sure, talent is important in the NBA, but it is only a part of a winning equation. The word culture is overused now in sports, but it cannot be overlooked when considering how far a team will progress.

“You know, I think that in this game of basketball it is probably 80% mental and 20% from a physical talent standpoint,” said Kuzma.  “Everybody in this league can be a star. It is all about fit and opportunity. Off-court chemistry plays a big role because you’re only on the basketball court three to four hours a day.” 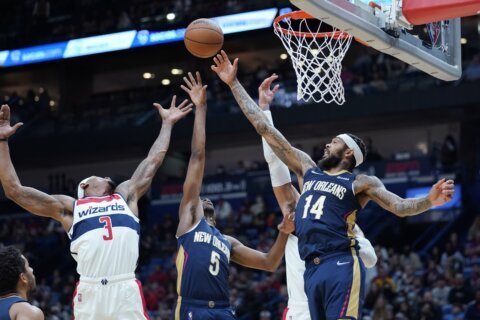 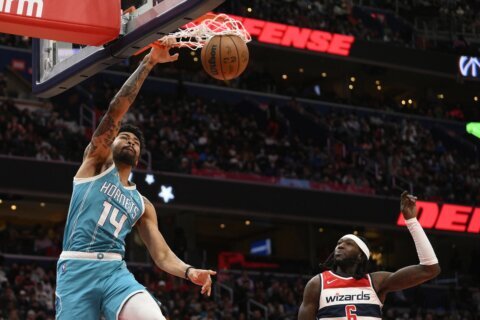