Unseld talking defense as he takes over Wizards job 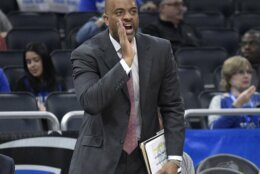 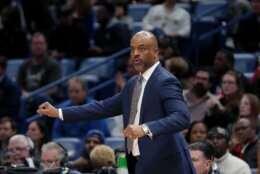 WASHINGTON (AP) — Wes Unseld Jr.’s path to this point was a bit different than his father’s.

The elder Unseld led Washington to an NBA title as a player before later taking over as coach. Unseld Jr. had a more modest playing career, but his experience as an assistant with multiple teams helped him earn a shot at coaching the Wizards.

“I think we both share that deep-rooted passion for the game,” Unseld Jr. said. “He was coming from a different place as a player, obviously an MVP, a champion. I think my experiences to this point have been different.”

Unseld was introduced as Washington’s new coach Monday, and there was understandably some nostalgia, given his father’s prominent place in franchise history. But the Wizards are looking for more than a familiar name, and after six seasons as an assistant with the Denver Nuggets, Unseld arrives with a clear vision of what Washington needs.

“The defensive side of the ball has been an issue here. That’s an area where I’ve been charged with for the past five seasons,” he said. “It boils down to buy-in and commitment, and I think all parties involved, including the players, they know for us to take that next step, to really get to the level which we think we can attain, it’s going to take that commitment to that side of the ball.”

Washington’s lone NBA title came in 1978, when the team was called the Bullets. Wes Unseld Sr. was MVP of the Finals. He was enshrined into the Hall of Fame in 1988, around the time he took over as Washington’s coach. He died last year.

“I know my dad’s up there smiling down,” Unseld said. “He’s probably chuckling, thinking, ‘You moron, I told you not to do this.’”

Unseld played collegiately at Johns Hopkins and became a scout with Washington in 1997. He was an assistant coach with the Wizards from 2005-11, then spent a season with Golden State and two with Orlando before his stint with Denver.

“The one thing that always stood out with Wes is his intelligence about the game, where the game’s headed, the modern NBA, and certainly his proficiency on the defensive side of the ball, which is an area that we absolutely must address immediately,” general manager Tommy Sheppard said. “He worked with Steph Curry and Klay Thompson when they were young, with (Nikola) Vucevic, Tobias Harris, (Victor) Oladipo when he was in Orlando. And certainly you look at the MVP season that (Nikola) Jokic had — and Jokic was begging him not to leave Denver.”

Unseld takes over for Scott Brooks, who made the playoffs three times with Washington but won only one series. The Wizards lost to top-seeded Philadelphia this year. They allowed the most points in the NBA — that they made the postseason at all was a credit to the offensive talent on hand. Bradley Beal averaged 31.3 points per game, finishing second in the league to Curry. Russell Westbrook averaged 22.2 points and a league-best 11.7 assists.

“The message was clear that they want to be coached. I think they’re looking for the accountability, they’re excited for this new opportunity, and I think they both know offense is not the issue right now,” he said. “So there’s buy-in right now. We’ll see as we get into training camp and the preseason, there has to be carryover.”

Although his experience as an assistant and his familiarity with the organization made him an obvious candidate for the job, Unseld still described “almost a feeling of disbelief” when he finally received it.

“I’ve been through the process with other teams over the last three years. At times you felt like you were close, so you never wanted to jump ahead of yourself until you actually got that call,” Unseld said. “It’s always that internal battle of being excited but not too excited. Tommy and I had been talking five, six times a day, so to see his name pop up was not extraordinary — until he said what he said.” 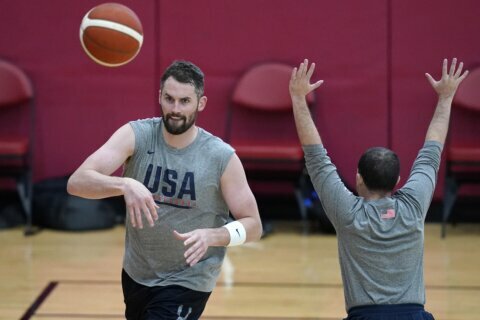 Love out, US basketball adds McGee, Keldon Johnson to roster