According to two people with knowledge of the deal, the Lakers are trading Kyle Kuzma, Kentavious Caldwell-Pope and Montrezl Harrell to Washington for Westbrook, who is a Los Angeles native and helped lead UCLA to a pair of Final Four appearances. The Lakers had the 22nd overall pick in Thursday’s draft and selected Jackson, a 6-foot-11 forward from Kentucky.

The people spoke to The Associated Press on condition of anonymity because the deal can’t be officially announced until Aug. 6, when the salary cap becomes official and teams can also begin making moves for the upcoming season. The Lakers will also receive second-round picks from the Wizards in 2024 and ’28.

The Wizards also aren’t holding on to Jackson. NBA Commissioner Adam Silver announced that Jackson’s rights were traded by the Lakers to the Indiana Pacers via the Wizards a couple picks later.

This is the second time in three years that the Lakers have made a significant offseason trade. They acquired Anthony Davis from New Orleans in 2019 for Lonzo Ball, Brandon Ingram, Josh Hart and three first-round draft picks.

Westbrook is the league’s career leader in triple-doubles with 184 and gives the Lakers another playmaker to pair with All-Stars LeBron James and Davis. Los Angeles won the NBA title in 2020 but struggled during the second half of this season when James and Davis were both out of the lineup due to injuries.

Even though the trade isn’t official for another week, Westbrook took to Twitter to thank Wizards fans, with one of his tweets ending “I will forever be grateful and appreciative of my experience with the organization. Thank you!”

The Lakers fell to the seventh seed in the Western Conference and beat Golden State in the play-in game to make the playoffs before they were eliminated by the Phoenix Suns in six games. Davis missed 30 regular-season games due to leg injuries and then the final 2 1/2 games against Phoenix with knee and groin ailments. James was out for 26 games in the regular season with a high right ankle sprain.

Dennis Schroder played the point last season, and averaged 15.4 points, but he turned down an extension during the regular season to test free agency.

The 32-year old Westbrook was drafted by Oklahoma City in 2008 and spent his first 11 seasons with the Thunder. He was traded to Houston in 2019 and then dealt to Washington last season.

In his lone season with the Wizards, he averaged a triple-double (22.2 points, 11.5 rebounds and 11.7 assists) for the fourth time in his 13-year career. He had 38 triple-doubles in 65 regular-season games as Washington made the playoffs for the first time since 2018.

While the Lakers get their point guard, the Wizards get three solid contributors. Kuzma, a 26-year-old forward, has 146 regular-season starts over four seasons and averaged 12.9 points and 6.1 rebounds last season. Harrell, a 27-year-old center who will be going into his seventh season, averaged 18.7 points and 33.1 minutes per game in 68 starts in 2018-19, which was the season before Davis joined the Lakers.

Caldwell-Pope, a 28-year-old guard, gives the Wizards a perimeter shooter. He converted on 41.3% of his 3-point attempts last season.

Jackson averaged 8.6 points and 6.6 rebounds for Kentucky in his lone collegiate season. Most scouts consider him to be an excellent defender because of his skills near the basket. 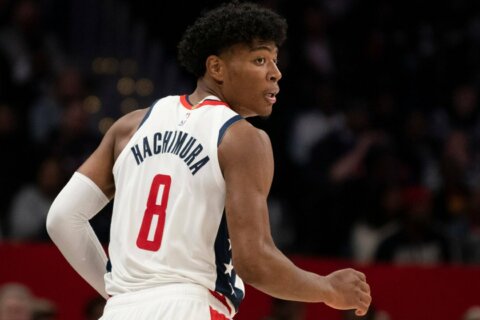