Coronavirus News: EMS workers file for vaccine exemption | Effectiveness of 2 doses of J&J vaccine | Some in Montgomery Co. not reporting status | Latest cases in DC region
Home » Washington Nationals » 'I was close to… 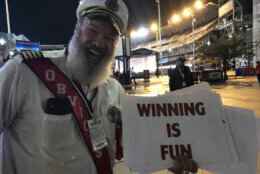 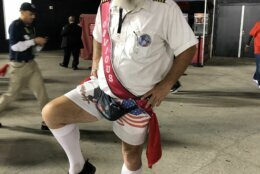 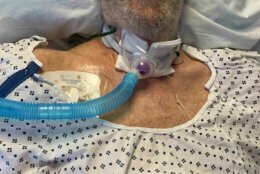 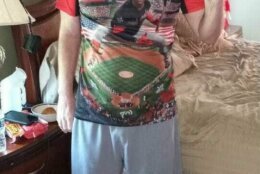 Washington Nationals fans are familiar with the team’s superfan, Captain Obvious: a smiling, bearded jokester who comes to the ballpark carrying signs with hilarious messages such as “winning is fun.”

But a serious illness has kept the funnyman away from Nationals Park since Opening Day: COVID-19.

“It’s a miracle that I’m here,” said Ted Peters, a longtime season ticket holders from Haymarket, Virginia, who’s been wearing the captain’s hat, white shirt with shoulder epaulets and “OBVIOUS” sash for years. “I was close to death. It almost took me.”

Peters — who’s in his 50s — didn’t take the coronavirus seriously at first and didn’t get vaccinated.

“Truth be told, I always downplayed this virus because I thought it was hitting older people. I didn’t consider myself old,” he said.

Then in early April, Peters attended a rehearsal dinner for his daughter’s wedding. “We seemed to follow all the protocols up to that point, but two or three days later, 20 of us came down with COVID,” he said.

Peters landed in the hospital for more than two months, spending about 20 days on a ventilator. He was kept heavily drugged.

Peters said he had pneumonia and blood clots, and neared a point of no return.

“One of the doctors said this is where you fight or you die. I remember him saying that. I processed it through my brain in a dream,” said Peters.

In his dreamlike state in the hospital, he also had what he calls a vision. He describes being in a gold room, where a voice was talking to him.

“Right next to me was a bridge that I was being coaxed to walk over,” Peters said. “And I was like, I’m not so sure about this. The person that was talking to me said, well you’ve got 12 minutes to make a decision.”

Before time ran out, Peters said, he walked out of the room.

“I still do have a belief that I was given a test … and I’m still here. So there’s more to do in this life.”

In mid-June, Peters was released from the hospital to a rehab center for physical therapy.

On July 1, he finally returned home where he’s been doing physical and occupational therapy and getting stronger.

The plan is for Captain Obvious to return to Nats Park in the next month or two, likely in a brand-new captain’s costume. Peters lost 80 pounds while in the hospital, so even his hat is too big for him now.

“It’s still fresh in my mind what I put my family through, and the people that were caring for me,” Peters said, his voice filling up with emotion.

“They didn’t know me from Adam, but they fought 24 hours a day … to save my life. It’s humbling that so many people would come together and tell me to fight even though I had very little hope of surviving this. And I can’t thank the people enough.”

He also wants people to know that COVID-19 is no joke.

“It’s a vicious little virus, and if you don’t take it seriously, it could kill you.”