Terry McAuliffe appears to have taken a step closer to regaining his old office, as The Associated Press has projected that he has won the Democratic primary for Virginia governor.
Listen now to WTOP News WTOP.com | Alexa | Google Home | WTOP App | 103.5 FM
(1/7) 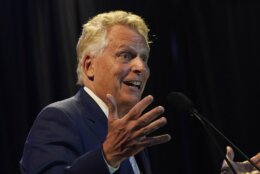 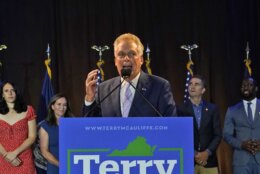 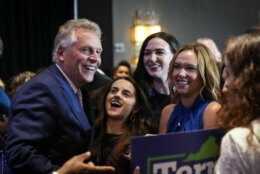 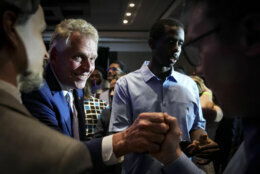 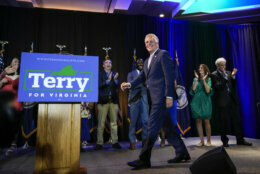 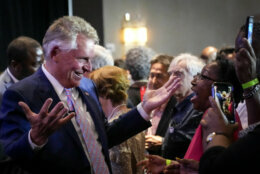 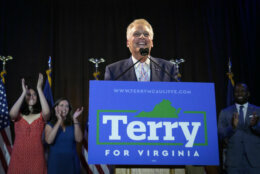 Terry McAuliffe appears to have taken a step closer to regaining his old office Tuesday, as The Associated Press has projected that he has won the Democratic primary for Virginia governor.

Meanwhile, the AP has projected Del. Hala Ayala as the winner of a six-candidate race for lieutenant governor, and that Attorney General Mark Herring has fended off a challenge from Jerrauld “Jay” Jones.

McAuliffe will take on Republican Glenn Youngkin on Nov. 2. Republicans picked their candidates for these offices in a convention last month.

The Virginia constitution prohibits anyone from serving consecutive terms as governor, but there’s no limit on nonconsecutive terms. McAuliffe served as governor from 2014 to 2018; he was succeeded by current Gov. Ralph Northam, whose term expires in January.

‘We are not going back’

At an event in Richmond Tuesday night, Gov. Ralph Northam, who was lieutenant governor during McAuliffe’s first term, introduced the presumptive nominee by saying, “We cannot let the party of ‘no’ take over again in the state of Virginia.” Indeed, though McAuliffe would be a repeat governor, his speech focused on moving forward.

“Virginia has some very big challenges ahead,” McAuliffe said. “We gotta go big; we gotta be bold, and we need seasoned leadership. … We are a different state than we were eight years ago,” he added, referring to his and Northam’s administrations, “and we are not going back.”

McAuliffe set some specific goals in his speech for a future administration: Paid sick days; paid family medical leave; a $15 minimum wage within three years; broadband for every Virginian within two years, and $2 billion in education investment, including a promise to raise teacher pay above the national average, which would be the first time in Virginia history that’s happened.

McAuliffe had sharp words for Youngkin, seeking to tie him to former President Donald Trump and treating the former president’s endorsement of Youngkin as a liability.

Noting the low turnout numbers, Virginia Republican Party Chairman Rich Anderson in a statement said in part “It’s safe to say that Republicans are the most excited group in Virginia for Terry McAuliffe’s primary win.” He called McAuliffe “a career politician with a record of broken promises, who is intent on dividing our Commonwealth” and claimed that McAuliffe’s term “made Virginians less safe, made Virginia more expensive to raise a family, and squashed economic opportunity.”

In a statement, McClellan congratulated McAuliffe, said she would work for his election and said in part, “Although tonight did not go the way we wanted it to, we made history. Like Maggie Walker and Shirley Chisholm before me, we put more cracks in the glass ceiling that one day a Black woman will shatter. And I hope I have inspired her to find her voice and demand her seat at the head of the table.”

McAuliffe also raised far more money than the other candidates, and from the jump, he had the backing of a substantial number of elected officials across the commonwealth, including many powerful Black lawmakers.

The winner will take on Republican Winsome Sears in the fall.

In a series of tweets, Ayala signaled the importance of jobs, schools, health care and broadband, as McAuliffe had, and also called for a continuation of criminal justice reform “so that every Virginian can feel safe in their community.” She also called Sears an “extremist,” while Sears said in a statement that Ayala “has a longstanding record of putting her radical leftist beliefs ahead of our Virginia values.”

Herring, who has already served two terms, appears to be the winner over Jones, who had sought to cast Herring as insufficiently progressive.

Herring tweeted, “After eight years of unprecedented progress, we’ll have the opportunity with a Democratic majority to break progressive ground like never before. Now, we’ll unite as one party and win big in November.”

Jones congratulated Herring on Facebook and said, “I look forward to working relentlessly with Democrats throughout the Commonwealth to beat Republicans up and down the ballot this November. Tonight’s result is disappointing, but we will not let it deter us from continuing the fight to bring true reform to Virginia.”

The winner will take on Republican Del. Jason Miyares in November.

In-person turnout was light, even by the standards of so-called off-year elections, in which federal offices aren’t on the ballot. As of about 5:30 p.m., Fairfax County turnout was at about 5%, while elections officials there hoped it would top 20%.

That said, more than 115,000 Virginians cast ballots before Tuesday, well up from the comparable election (statewide races, without federal offices) four years ago.

Larry Sabato, director of the Center for Politics at the University of Virginia, said it was a strong night for McAuliffe: Given that it was a five-way race, Sabato said, “Republicans were hoping he would get under 50, some well under 50, percent of the vote, and of course he’s over 60%.”

While McAuliffe’s victory has its historic aspect, the diverse gubernatorial field would have produced a historic first no matter who had won. McAuliffe’s win echoes Joe Biden’s presidential nomination last year – an experienced, older white man (McAuliffe is 65) topping a diverse list of candidates.

McAuliffe drew criticism from some more progressive voters who criticized his record on energy and criminal justice issues and who saw him as standing in the way of Carroll Foy and McClellan, who were each trying to become the nation’s first Black woman governor. Either would have also been Virginia’s first female governor.

The fact that McAuliffe and Herring beat out candidates of color, and even Ayala is considered an establishment candidate, could have repercussions, said Kyle Kondik, of Sabato’s Crystal Ball.

“I don’t think the ticket is necessarily as diverse as the Democratic electorate is,” and it could give the party image trouble on a national scale, Kondik said, though he added that McAuliffe “has gotten a lot of support from voters of color, as well as leaders of color.”

Maya King, of Politico, told WTOP the two most important factors there were name recognition and fundraising. All three nominees “are or have been fixtures” in Virginia politics, and have lots of support from Black leaders, she said.

Sabato agreed that McAuliffe “is kind of the Biden of this race – he was a safe choice.”

Democratic voters might have felt the need to make that safe choice, Sabato argued, because Youngkin has pledged $75 million of his own money for his campaign. He’ll probably outspend McAuliffe, but the former governor “can do better than some of the other Democratic candidates in the field,” Sabato said.

Sabato added that while Youngkin “projects a pretty good image,” Democrats are “hoping to get into issues, where he’s more conservative than, at least, Virginians have been voting.”

Kondik said he would “rather be McAuliffe than Youngkin to start this race, but I do think it has the potential to be very competitive.”

Virginia’s gubernatorial election is always one of the first big races after any presidential election, and the president’s party usually doesn’t do as well in the Virginia race, which “gives Youngkin some hope,” Kondik said. On the other hand, Biden won Virginia by 10 points last year, so McAuliffe “can afford a little erosion,” Kondik said.

Kondik predicted Youngkin would have a hard time attracting the moderate Northern Virginia voters he needs to turn around the GOP’s recent fortunes.

Many political observers are calling the Virginia election a bellwether for the 2022 midterms, in part because there aren’t many other elections to pay attention to in this odd-numbered year and partly since it will test the state’s reputation as an increasingly Democratic one. Republicans haven’t won a statewide office since 2009.

‘We need a new kind of leader’

In a statement, Youngkin described Virginia as a state that over the past eight years has gotten less safe and more expensive, and has not offered enough economic opportunities.

“We need a new kind of leader to bring a new day to Virginia,” Youngkin said. “Get ready, because Terry McAuliffe will default to the same political games he’s played his entire life.”

There doesn’t appear to be an instance of a former Virginia governor running to regain the office and losing.

McAuliffe also ran for the Democratic nomination in 2009, but lost to Creigh Deeds.