Column: Maybe the Nationals should have stuck to sports

The Washington Nationals’ trip to the White House wasn’t baseball. An event like Monday’s is as political as it gets.
Listen now to WTOP News WTOP.com | Alexa | Google Home | WTOP App | 103.5 FM

“Don’t think. It can only hurt the ballclub.” – Bull Durham

A lot of times in baseball, it pays to not think too much. Don’t think about the runner while you’re trying to get a tough out.

But the Washington Nationals’ trip to the White House wasn’t baseball. An event like Monday’s is as political as it gets. The Nats were clearly unprepared for the ramifications of their actions, on a fan base still reveling in their unexpected World Series title.

The title of the column up there — which, if you know anything about me, you already know — is a joke. There is never any separating sports from politics. That was especially true Monday, because there is no way not to be political about your choice, either to accept or decline an invitation to President Trump’s White House.

Those who accepted, even those who stood by without saying a thing, smiling at the festivities and their teammates’ more active roles in them, picked a side. Perhaps they didn’t realize it until Kurt Suzuki whipped out a Make America Great Again hat, unprompted, leading to an awkward … whatever this was … from Trump.

Maybe they didn’t know Ryan Zimmerman’s scripted remarks would echo the president’s own slogan, while thanking him for “keeping everyone here safe in our country,” something a good many people have serious grounds to contest.

Eight Nationals didn’t show up. Unsurprisingly, there’s been plenty of talk about Sean Doolittle’s decision to decline the White House celebration invitation Monday. But if the District’s baseball team represents its fans and its citizens, shouldn’t the real questions have been asked of those who did attend?

Because let’s be absolutely clear about what a White House invitation to a champion sports team is, no matter the current occupant: It’s an opportunity for a politician to glean some shine off the accomplishments of others, and tap into the goodwill and joy that only sports bring.

That’s been true for every president.

The fans made it clear what they thought of Trump during the final World Series game at Nats Park a week ago.

The Nationals Park crowd loudly booed President Trump after he was introduced. An inning later, some fans chanted, “Lock him up! Lock him up!”

Game 5 of the World Series is the first MLB game that Trump has attended as president. pic.twitter.com/EqirCKAq0z

Every National witnessed that display up close and personal. They knew exactly what that reaction meant. Riding high off a delirious celebration weekend or not, they had to know what a good chunk of their fans think of the president.

To visit the White House now made no sense, except for a president trying to bury that moment. Teams usually take several months before arranging a visit, coordinating it with their next visit to the Capital Region the following season.

At this point in the Caps’ celebration, they were still drunkenly swimming in fountains. Given that the Nats play just down the street, there would have been plenty of options next spring.

The Nats celebrated with the city Saturday. They partied with the Caps Sunday night. Both festivities made sense. The fans supported them through a host of playoff heartbreaks; the Nats and Caps have shared an unusual bond of District sports teams, players not just showing up at each others’ games, but really buying into the fandom.

The @Nationals' Ryan Zimmerman and @Max_Scherzer in the building to get Game 4 started right! #ALLCAPS #StanleyCup pic.twitter.com/P0SO74M4Kg

That’s the face of the franchise and the club’s emotional leader decked out head to toe, helmets included, belting out their fandom at the top of their lungs. You can’t convince me they weren’t wearing skates.

That the same face of the franchise was the one delivering those careless remarks Monday, inevitably connects a line through those events.

Yes, Suzuki and Zimmerman, and anyone else in America, are allowed to believe whatever they want. But they are also subject to the reaction and judgment of others for expressing those beliefs, especially when coupled with the actions this administration has taken in the name of its mission to “Make America Great Again.”

In a modern America increasingly defined by the haves and the have-nots — everyone on that stage was a multimillionaire — and with the steps that have been taken by the former to distance themselves from the latter, personal expression is one of the few remaining avenues for the masses to be heard at all.

This much was always going to be true: A lot of fans were going to learn something they didn’t want to learn about their heroes. Still, for some, Monday’s display unnecessarily shredded a generation’s worth of goodwill for no good reason.

The whole idea of everyone being able to have different beliefs without any backlash rests on a faulty assumption that the political manifestation of those beliefs aren’t actively harmful to others. But even the incredibly sheltered life of a ballplayer — in which your peers range from somewhat to incredibly famous, and somewhat to incredibly rich — is no excuse, given what just happened at Nats Park.

There will, no doubt, be those who celebrate what happened Monday, because so much of our existence has been boiled down to a zero sum game of winners and losers. If people were offended, or shocked, or even simply disappointed by the display that Suzuki and Zimmerman put on Monday, those who blindly support every action the president takes will extol the proceedings as a victory.

Suzuki’s defense, via texts with USA Today’s Bob Nightengale late Monday, consisted of what I like to call Schrodinger’s Scat — it was both serious and a joke at the same time. He threw some crap at the wall to see if it would stick, and when it didn’t, he said he was just having some fun, and it was everyone else’s fault for taking it too seriously.

It’s a classic tactic of our time.

Zimmerman should have known better, though. For a decade-and-a-half, he’s been the most reliably vanilla soundbite in Washington. His statement started out that way, generic and apolitical enough for anyone and everyone.

But when you say that Trump is “keeping everyone here safe in our country,” you’re either oblivious or willfully ignoring how his policies have affected millions who don’t look like you. One implication is worse than the other, but they’re both problematic.

When you follow that by saying he’s “continuing to make America the greatest country in the world,” you’re aping some stock patriotic language, but also the president’s reelection slogan. Combine the two, with the knowledge of Doolittle’s abstention, just a week removed from the Game 5 appearance, and it all becomes a little harder to swallow.

It is one thing to accept the invitation to appear, and even to present the president with the customary jersey. It is quite another to cut a campaign ad for this particular president on the South Lawn, one day shy of a year from the next election.

We don’t know what Zimmerman’s intents were, as he and the team dodged any chance to clarify in the moment what happened Monday afternoon.

Tweeted this earlier but it’s definitive now: The Nationals left the White House without speaking to, or being within 100 feet of, any reporters.

But willingly standing with a deeply divisive president for a photograph, a jersey presentation, and using the power of your accomplishments in service of political power amid a citywide celebration was something the team probably should have thought about beforehand. 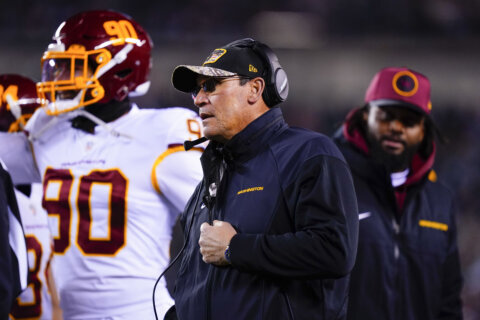