The visit came just 48 hours after the team paraded down Constitution Avenue and a day after they celebrated at the Washington Capitals’ 4-2 win over the Calgary Flames, a game in which several Nats players rode shirtless on a Zamboni during second intermission.

The ceremony on the South Lawn opened with the White House band playing “Baby Shark,” which has been an anthem of sorts for the Nats’ championship run. Trump then took the podium to say a few words.

“Throughout this season, the Nationals captured the hearts of baseball fans across the region and across the country,” Trump said. “America fell in love with the Nats baseball … that’s all they wanted to talk about. That, and impeachment. I like Nats baseball much more.”

Trump recounted the Nationals’ now-infamous 19-31 start to the season, Max Scherzer’s All-Star performance and Kurt Suzuki’s walk-off, three-run homer in the Nats’ 11-10 win over the Mets on Sept. 4.

At that point, Suzuki took the podium at Trump’s behest. 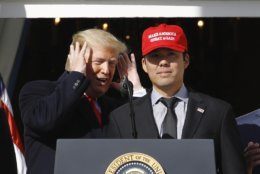 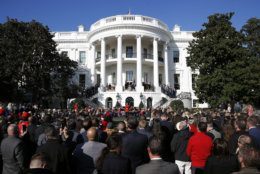 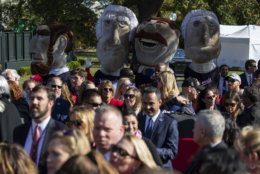 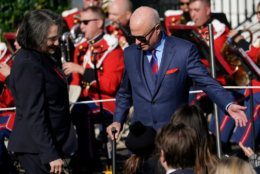 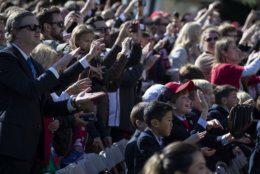 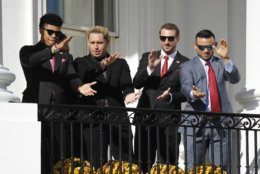 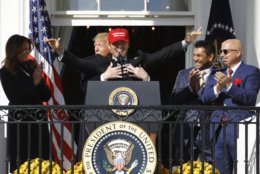 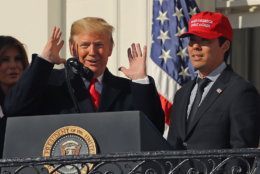 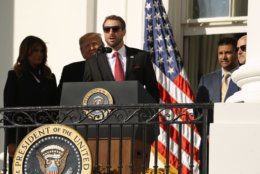 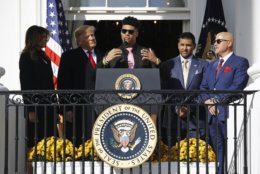 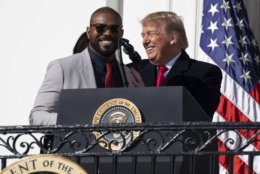 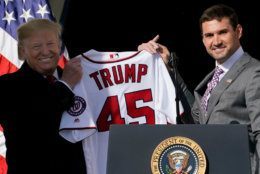 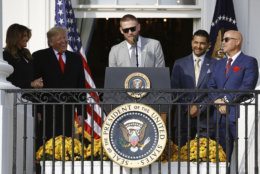 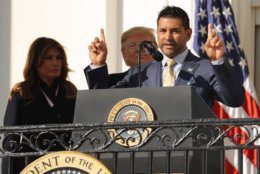 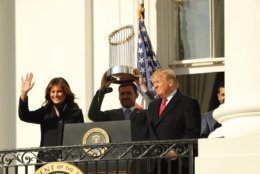 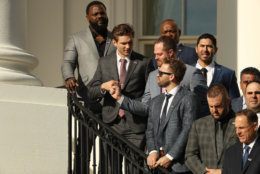 “What a good job he did, I didn’t know that was going to happen,” Trump said.

Max Scherzer would take the podium next.

“What a magical month,” Scherzer said. “When the city gets behind you and your teammates believe in each other … magic happens.”

Trump would then reference the team’s “Stay in the Fight” motto, and how the Nationals won five elimination games to earn their first World Series title in franchise history.

Juan Soto, the 21-year-old phenom who became the youngest player to hit three home runs in the World Series, said a few words before the 36-year-old NLCS MVP Howie Kendrick took to the podium.

Anibal Sanchez, who came four outs shy of a no-hitter in Game 1 of the NLCS, would speak briefly before Ryan Zimmerman, the first-ever Nationals draft pick, presented Trump with a personalized white Nationals jersey with the number 45.

“We’d also like to thank you for keeping everyone safe in our country, and continuing to make America the greatest country to live in the world,” Zimmerman said to Trump.

“We only had one choice: Stay in the fight,” Strasburg said. “And we stuck together and pulled for each other … what a way to celebrate, finally finishing that fight.”

“Not a baseball town? Not even close,” Rizzo said to the crowd of Nationals fans. “What a great fanbase we have.”

“We’re proud to say that we are the (2019) World Champions in a season that unified a region when the region needed unifying the most,” Rizzo said.

Despite those moments and the president referencing impeachment, the Nationals’ visit did not have as much political undertone as when the 2018 champion Boston Red Sox were honored by Trump but without manager Alex Cora, who did not attend that ceremony after citing his frustration with the administration’s efforts to help his native Puerto Rico recover from a devastating hurricane.

Martinez, whose parents are Puerto Rican, said he was hoarse and didn’t want to talk because of the partying the night before.

“We met with the Caps last night, and things got a little interesting,” Martinez said, before cracking a joke about his players not wearing shirts anymore.

“I’m so proud of this group of guys and what it means to this city to be a part of it,” Martinez said.

Reliever Sean Doolittle, who along with his wife has worked with Syrian refugees and military veterans and supports gay rights, did not attend the event.

Also among those not listed as being in attendance Monday are National League MVP candidate Anthony Rendon, outfielders Victor Robles and Michael A. Taylor, and pitchers Joe Ross, Javy Guerra and Wander Suero.

Of the 25 players on Washington’s World Series roster, 18 were in attendance. Principal owner Mark Lerner was the only member of the ownership group listed as attending.