In a season of firsts, the Washington Nationals have clinched their first pennant in franchise history and the first in D.C. since 1933. What other firsts await them in the Fall Classic?
Listen now to WTOP News WTOP.com | Alexa | Google Home | WTOP App | 103.5 FM

First in war, first in peace and first in the National League.

It’s a headline that’s been waiting to be written since the Montreal Expos relocated to D.C. and returned baseball to Washington for the first time since 1971.

Yet, as twisted and tortured as Washington’s baseball history has been, the 2019 Nationals took the leap onto baseball’s grandest stage in the shortest possible measure: sweeping away the tradition-laden, 11-ringed St. Louis Cardinals (the most of any NL franchise) in four games, culminating with Tuesday night’s 7-4 clincher.

To do so, they’ve had to shed their earned reputations as chokers, as a crew without the fortitude to get the job done, as a franchise cursed to relive the October Groundhog Days of Games 5 in baseball purgatory.

Every remnant of this generation of Nationals’ fractured playoff past couldn’t be there at once. But to have the Dodgers present for a Game 5 in which the skipper in the other dugout pulled all the wrong levers in a come-from-ahead loss felt fitting. As did a chance at redemption against that first playoff opponent from 2012, the St. Louis Cardinals — this time with a fully healthy Stephen Strasburg in tow.

There have been echoes throughout these playoffs of postseasons past. They reverberated again Tuesday night. The big early lead over the Cardinals; the lefty on the mound stalling out in the fifth inning to led them close the gap; the singalong single from the gregarious, popular outfielder.

For a moment, those echoes looked like they might actually be a chorus, as the Cardinals loaded the bases with two outs in the eighth against Daniel Hudson. Up stepped another left-handed St. Louis infielder — Matt Carpenter, looking to reprise the role of Daniel Descalso. He hit a sharp ground ball to a middle infielder, who couldn’t field it cleanly. Instead of allowing the glance to trickle into center field, Brian Dozier (supplanting Ian Desmond) was able to collect himself, and the ball, and get the out at first.

The Cardinals seemed to have expended all of their devil magic to get out of a division series the Atlanta Braves absolutely coughed up. By Game 3 of the NLCS, they were making the senseless errors and miscues they traditionally seemingly extract psychically from their opponents. Those continued in Game 4, allowing the Nats to build a 7-0 lead that, this time, would be enough.

This place has everything: Navy jerseys, Patrick Corbin punching out the side, totally needless intentional walks, the death of #CardinalDevilMagic

No other Nats team since then could lay claim to the same kind of firsts, until now.

First World Series in Washington since 1933.

Maybe Ryan Zimmerman, who has seen every wart, every lost season, every postseason catastrophe this franchise has ever known eschewed the goggles amid the spraying Champagne because he needed the sting in his eyes to know it was real.

Take Zim’s lead and soak it in. Enjoy what it means. You never know when you’ll be here again.

If schadenfreude is your thing: Did I mention today is Bryce Harper’s birthday?

Bryce: "We want to bring a title back to D.C." Oops. pic.twitter.com/4ygJdukIon

We’ll find out soon if a title is coming back to D.C., but first we have to wait a week, as Game 1 won’t take place until next Tuesday.

A week in 2019 already feels like a lifetime, but it’ll seem like an eon watching as the New York Yankees and Houston Astros duke it out for the American League pennant. You will hear A LOT of numbers thrown at you in that week. So let’s just get the particularly grim ones out of the way.

The Nats are the ninth team to sweep a best-of-seven league championship series since the format was extended. Of the previous eight, only the 1995 Atlanta Braves won a title.

Oh, but it gets worse. Of the five LCS sweepers who started the World Series on the road — as the Nats will, either in the Bronx or in East Texas — none have won as many as two games in the Fall Classic. That’s right, all five have lost, three by sweep, only the 1988 Oakland Athletics and the 2015 New York Mets managing to push the series to five games.

The Nats will hope that's where the comparison ends ….

The Nats spent this postseason rewriting their own history. Now, they’ll have to buck MLB history to bring home the first World Series title since 1924.

All of the teams above, other than those Champion ’95 Braves, share one thing in common: They lost Game 1. There may not be a more important game to determine the Nats’ ultimate fate this year — given the layoff, given the history — than that game next Tuesday.

Do the Nats hand the ball to Max Scherzer once again, as they did in the Wild Card Game, or to Stephen Strasburg, whose career postseason ERA of 1.10 ranks among the best ever?

Let the debate — and an eternal week — begin. But first, Nats fans, enjoy this. You’ll never go to your first World Series again. 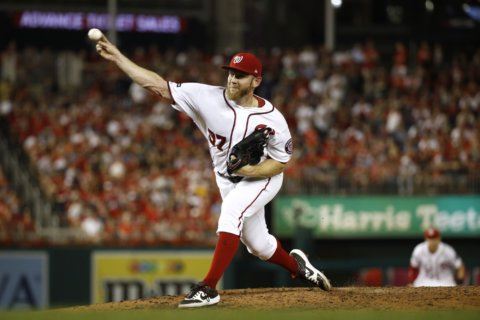