This essay is part of our ongoing series, The Greatest Game I’ve Ever Seen. Please visit the series homepage to…

This essay is part of our ongoing series, The Greatest Game I’ve Ever Seen. Please visit the series homepage to read other stories and look for a new entry each week.

WASHINGTON — Playoff baseball was finally back in the Nation’s Capital.

This incarnation of Major League Baseball in Washington D.C. was an infant by most people’s standards. It was only born in 2005 and was already going to the playoffs in 2012.

I planned to go to every home game possible, however many there would be (through a weird, one-time only quirk in scheduling the series would start with two games in St. Louis, then finish with the final three in D.C.).

I bought “standing room only” tickets and considered them a bargain at 50 bucks a pop.

Game 3 was a blowout. I will not waste another word.

Game 4 became an elimination game with the irritating Cardinals up 2 games to 1 in the best of 5 series.

It took some hunting, cunning and patience, but me and my two buddies finally found a good spot up the first baseline to camp out. We even had a perch for our food and beer. This was about as good as “standing room” can be.

Ross Detwiler (arguably our weakest starter) was on the mound. Stephen Strasburg (arguably our best pitcher) wasn’t even on the postseason roster.

Things started well. Adam LaRoche homered in the second inning. But the Cards matched that run in the top of the third on a sac fly by Carlos Beltran.

And then the tension set in.

Casual baseball fans cannot appreciate the slow heartburn and stomach knots that form over the course of a 1-1 ballgame. Make it a playoff elimination game and the effects are magnified.

In playoff elimination games, everyone is available. But I think manager Davey Johnson caught everyone off-guard when he brought in Game 2 starter Jordan Zimmermann to pitch the seventh inning. It was the first time in Zimmermann’s career that he would be called upon to pitch in relief.

The righty had been rocked for five runs in just three innings in Game 2 three days earlier, but threw only 63 pitches. Besides, this would be his normal day to throw on the side.

The move still seemed risky. But Zimmermann’s performance was sublime. He struck out the side on 12 pitches, each strike raising the decibel level of the crowd with his final effort lighting the radar gun aflame at 97 mph.

In a game so memorable in Washington Nationals lore, that moment is overlooked. And I believe shifted the delicate momentum of the game in the Nationals’ favor.

Zimmermann bridged the gap to the one-two punch of Tyler Clippard and Drew Storen. Clippard struck out the side in the eighth and Storen shut down the Cards in the ninth. When all was said and done, the Nationals’ bullpen had struck out eight batters in three innings to keep the score level.

Then came the bottom of the ninth. Jayson Werth strode to the plate, with flamethrower Lance Lynn on the mound. Lynn got two quick strikes on Werth, but could not finish him off. Foul, after foul, after foul, after foul … it would turn into a marathon at-bat. Between defensive swings to stay alive, Werth showed his keen eye, letting offerings off the plate pass. Eventually, he worked the count full.

Let me pause for a moment and take you to the bottom of the 13th inning of the Nationals’ game against the Reds on Friday the 13th of April of that same year. Jayson Werth singled with the bases-loaded for a walk-off win. I know, because I was there.

Now, I ain’t superstitious, but I was born on the 13th and I’ve always considered 13 my lucky number.

Back to the bottom of the ninth. In a postgame interview, Werth said deep into his at-bat he stepped out and looked at the scoreboard and saw that the pitch count was already at 12 and had to do a double-take to make sure that was correct.

Any avid baseball fan knows what comes next. Werth rocks pitch number 13 out of the ballpark and into the Cardinals’ bullpen. Right hand raised in triumph. Helmet flip. Giant leap. Mob scene at the plate. Pandemonium in the stands.

No one wanted to leave. The explosion of collective hysteria slowly waned into a loud, sustained buzz. After about 15 minutes, fans reluctantly turned their backs on the field and trudged into the stadium’s guts.

And this is where the party raged on. I have never high-fived and chest-bumped so many strangers.

I’m no fan of The Bullpen, the beer garden across the street from the center field gates, but that night we followed the throng into that cramped parking lot with its plywood bar stands and line of porta-potties to get our fill of crappy, $10 beer.

Standing in that dingy parking lot was better than sitting on any leather bar stool in the city. The air that night was sweeter than any ocean breeze. Everyone wearing Nats gear was my best friend, and the cheap beer tasted like Champagne.

The party would go on well into the night and all the details cannot be revealed.

I’ll never forget that game for as long as I live, and my liver will never forgive me for the postgame celebration. 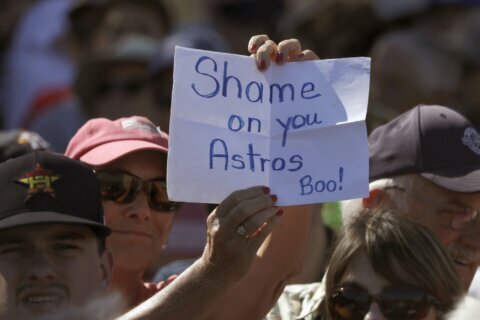