‘Incredibly lucky’: No major injuries after small plane crashes into car, lands on US 50

A small plane that had just taken off from Freeway Airport in Bowie, Maryland, struck a car traveling along U.S. 50 and crash-landed on the highway late Thursday morning. Remarkably, the crash did not lead to any major injuries, authorities said.
Listen now to WTOP News WTOP.com | Alexa | Google Home | WTOP App | 103.5 FM
(1/5) 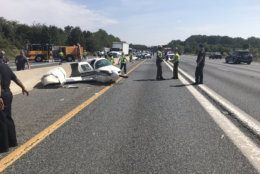 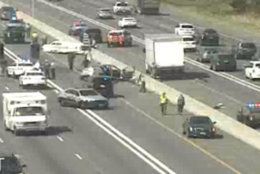 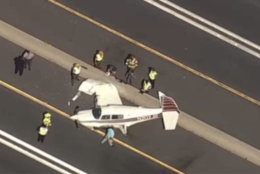 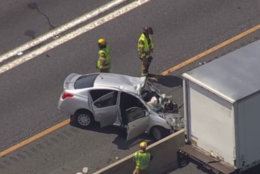 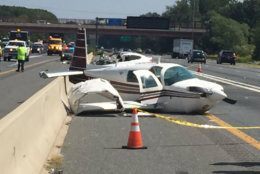 A small plane that had just taken off from Freeway Airport in Bowie, Maryland, struck a car traveling along U.S. 50 and crash-landed on the highway late Thursday morning. But remarkably, the crash did not lead to any major injuries, authorities said.

Photos from the scene showed a frightening scene. A small plane, with its left wing entirely sawed off, lay in the shoulder of U.S. 50 at Church Road. A silver Nissan with its front end smashed sat about 30 feet down the road.

In addition to only minor injuries, the crash did not cause a fire or spill any fuel, authorities said.

“I have to say, we are incredibly lucky this was not a more tragic story,” told Mike Yourishin, a spokesman with Prince George’s County Fire and EMS Department.

During an interview with NBC Washington, Fire Chief Benjamin Barksdale called it a “miracle.”

“No fire, no fuel spillage at all,” he said. “So yes, we’re very fortunate today.”

Maryland Gov. Larry Hogan said he was relieved there were no major injuries and tweeted his thanks to first responders “who acted so quickly to help those involved.”

We are relieved that there were no life-threatening injuries after a small plane crashed on Route 50 this morning. Our sincere thanks to the first responders who acted so quickly to help those involved. https://t.co/iykAZQ6DcH

The cause of the crash, which happened about 11:20 a.m. Thursday, is still unknown. Maryland State Police said the Federal Aviation Administration and the National Transportation Safety Board were both on the scene to investigate the crash.

State police identified the pilot of the small plane as 58-year-old Julius Tolson, of Laurel, Maryland, and his passenger as 57-year-old Michael Garrah, of Columbia, Maryland. The two men in the car were identified as 29-year-old Ryan McClain, D.C., and Eric Diprospero, of Baltimore.

The large response from police and emergency crews blocked the two eastbound lanes of U.S. 50 and one lane of the westbound lanes for several hours Thursday afternoon. All lanes had reopened shortly before 3:30 p.m.

$50,000 reward offered for info leading to arrest of man who robbed postal carrier