Coronavirus News: Fairfax Co. votes to increase substitute teacher pay | Is it time to get a COVID-19 booster? Which one? | Local cases of COVID-19 | How many in DC region are vaccinated?
Home » Prince George's County, MD News » WATCH: U.Md. surprises local…

While his parents beamed, Noah was nearly speechless, and clearly overwhelmed as an entourage from the University of Maryland hand delivered that coveted big envelope that college hopefuls dream about.
Listen now to WTOP News WTOP.com | Alexa | Google Home | WTOP App | 103.5 FM

WASHINGTON — Shortly after 9:30 a.m. on a blustery Sunday morning, a bus from College Park pulled up to Noah Jones’ house in Bowie.

When the doors opened, out came members of the marching band, Testudo the mascot, and Shannon Gundy, the director of admissions at the university who was carrying the big envelope high school seniors are always hoping for.

When she knocked on the door, the band started playing and Gundy made it clear: “Welcome to the University of Maryland! We’re glad to have you as a part of our family.”

While his parents beamed, Noah was nearly speechless, and clearly overwhelmed. He was also probably pretty tired, since his parents cut short a ski trip to help make this event happen in his front yard. 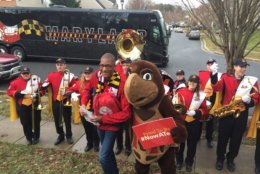 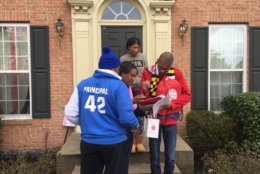 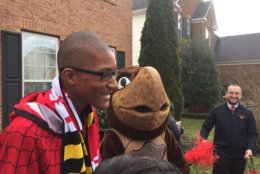 “We had to get up at 4 o’clock in the morning to get here on time,” admitted Dwayne Jones, Noah’s dad. “In all that sleet and wet and wintry mess, to get him, because he didn’t know. He thought we came home because I had a meeting.”

This was the first of a handful of stops the admissions office was making around the state of Maryland today to let graduating seniors know they’ve been accepted at Maryland.

“Unfortunately we can’t do it for everybody, but we want students to know how really big a deal it is that they’ve been accepted to the University of Maryland,” said Gundy. “And we want them to get excited about it pretty early on.”

This is the third time the school has done acceptance events. How was Noah picked?

“The way he presented himself in his application for admission is something that’s important,” said Gundy. “We want students in this area, Prince George’s County, to know they’re important to the university so we wanted to have someone in this vicinity and he sort of fit the bill for all of the things that were important to us.”

From there, “the rest of it is really logistics,” added Gundy. “It comes down to things even as minuscule as can the bus fit on the street in front of their house?”

Noah’s mom and aunt are both College Park grads as well, and he said he’s wanted to go there ever since he participated in a young scholars program in 2016. He plans to major in history.