Dozens of University of Maryland football players rolled up to J.C. Nalle Elementary School in Southeast D.C. Thursday afternoon to mark the one year since the death of Jordan McNair. The football players celebrated their teammate by spending time and playing with the kids.
Listen now to WTOP News WTOP.com | Alexa | Google Home | WTOP App | 103.5 FM

One year after Maryland football player Jordan McNair died of heat stroke, many of his teammates did something amazing.

It could have been a somber day, but they chose to celebrate McNair’s life by playing games with children half their age.

When a bus filled with dozens of University of Maryland football players rolled up to J.C. Nalle Elementary School in Southeast D.C. Thursday afternoon, a group of chanting, dancing kids was waiting outside to greet them with high-fives.

Running back Javon Leake, 20, was touched.

“That was special, seeing the smiles on their faces. They were clapping for us coming in,” he said. “That just makes you feel good as a football player that you’ve got kids like that who look up to you.”

The event was called Jordan McNair Field Day, and the National Center for Children and Families helped make it happen.

Stations were set up outside, allowing kids to play all sorts of games with their visitors, from football to basketball, soccer to jump rope contests and more.

“I actually am having fun playing kickball,” said 10-year-old Joshua Hawkins, a fourth-grader at the school.

It was hard to tell who was having more fun, the little students or the big ones.

“This whole day is dedicated toward Jordan, and we just wanted to pay our respects and show how much we care, how much we miss him,” said 21-year-old running back Lorenzo Harrison. “We came here to J.C. Nalle … to spend some time with the kids. We knew Jordan would have liked that.”

Leake knew McNair very well and described him as, a “humble, quiet guy who always got a big smile on his face. He’s not going to say too much, but you’ll never know what’s wrong with him. He was always smiling, just a good guy to be around.”

All of the Maryland players who took part in the event wore matching shirts bearing McNair’s number 79. 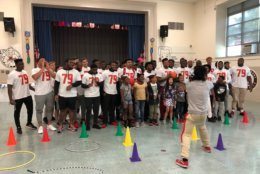 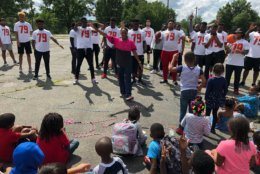 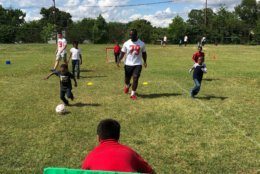 ‘Still outside?’ U.Md. releases footage from day of McNair collapse 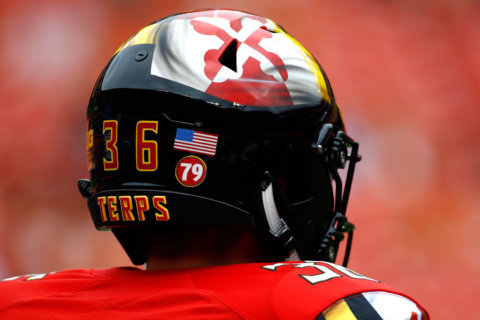 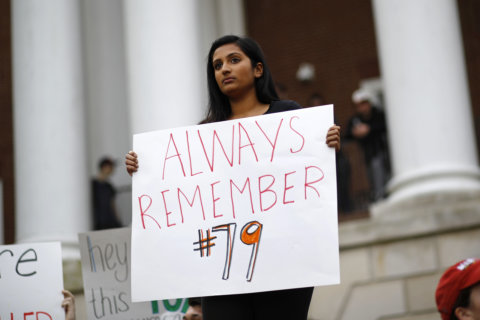