Consideration of the bills comes in the same week that a shooting inside a high school in St. Mary’s County, Maryland, left one victim hurt, another killed and the 17-year-old shooter dead.

The issue is also getting attention as thousands of demonstrators are expected to gather at the “March for Our Lives” rally in D.C. on Saturday.

One of the proposals under consideration, House Bill 1302, would take guns out of the hands of anyone deemed a danger to themselves or others.

In her testimony before a Senate committee, Democratic Del. Geraldine Valentino-Smith, who represents Prince George’s County, referenced Saturday’s march. “This weekend, we’re going to see thousands of young people come, and they’ve asked us for more than prayer vigils,” she said.

Valentino-Smith told the committee members that the bill is being crafted so that it does not violate anyone’s constitutional rights. “This does not restrict law-abiding citizens from their right to bear and carry arms,” she told the panel.

He noted that there are already statutes aimed at preventing violence in the form of protective orders and involuntary commitment. “What am I missing? Why do we need this new law?” Hough asked.

Dumais said that the statues already in place “don’t take away the guns;” and she explained that in some cases, even when a judge orders a mental evaluation for a respondent brought before the court, that person may be released and remain in possession of guns.

Other bills heard in the Senate Judicial Proceedings Committee included one that would put school resource officers in every public school in the state.

Sen. J.B. Jennings, R-Baltimore and Hartford counties, who sponsored the bill, noted that the government buildings in Annapolis have metal detectors at their entrances, and armed security officers, including state police inside the committee hearing rooms.

“Why wouldn’t we want police officers in our schools now?” he asked. “Times have changed. We need to do something, and something quick” he told committee members.

Jennings told lawmakers, “This isn’t a perfect bill,” but urged his colleagues to move ahead with the legislation, saying, “Let’s be honest; this is where we are in this world.”

Republican Sen. Steve Waugh, whose district includes St. Mary’s County, testified in favor of several bills, including one that would establish threat assessment teams in schools.

Waugh said while there are some flaws in the proposed legislation that need to be addressed — forming methods to deal with students identified as at-risk is as important as identifying kids who are troubled. “If we create a process by which we can identify risks, but we have no method of mitigating those risks, then ultimately, you fail,” Waugh said.

There were a number of criticisms connected to Waugh’s bills expressed during the hearing. Sen. Delores Kelley, vice chair of the Senate Judicial Proceedings Committee, said, “If we aren’t careful, I’m concerned that school would be like a police state.”

Kelley explained she worried that some students would be assumed to be at-risk for violence “based on their life circumstances.”

Larry Polsky, the Calvert County health officer, told the panel he was feeling a little shaky as he testified and explained that his daughter attends Great Mills High School, the scene of Tuesday’s deadly school shooting.

“A little after 8 a.m., I got a text from my daughter,” he said. “She told me she was on lockdown, but she was safe.” Just moments later, Polsky said he was called by his counterpart in St. Mary’s County to help put a team of mental health counselors together to assist in that county.

“For the rest of the day, I found myself flipping in roles between shaken parent and health professional that had an obligation to put other people first,” Polsky said.

While saying he recognized the need for bills to address the issues surrounding mental health and school safety, Polsky called Senate Bill 1263 “poorly crafted” and worried it would pull mental health counselors away from providing mental health services to simply screening students.

During the hourslong testimony Friday afternoon, lawmakers made reference to the need to act swiftly. 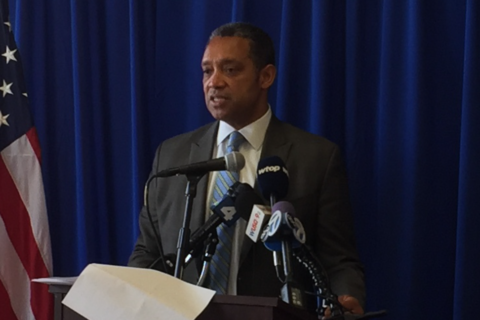