A man is dead and a woman and a 5-year-old boy are in critical condition after a Glen Burnie, Maryland, fire just before midnight Wednesday. The fire was one of five that kept Maryland and Virginia firefighters busy early Thursday: Firefighters rescued eight from an apartment building in Fairfax County. Fires also were reported in Herndon, Germantown and Oxon Hill.
Listen now to WTOP News WTOP.com | Alexa | Google Home | WTOP App | 103.5 FM
(1/9) 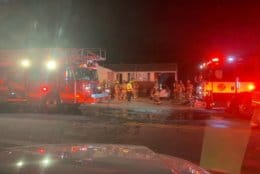 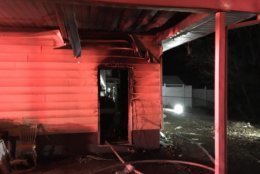 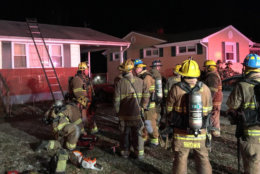 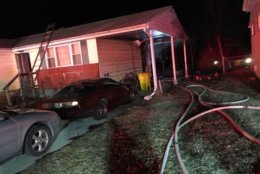 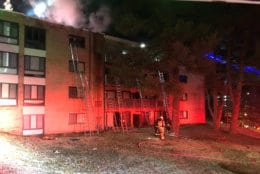 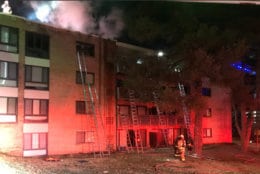 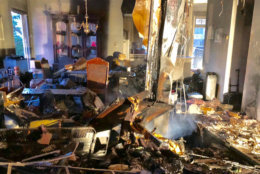 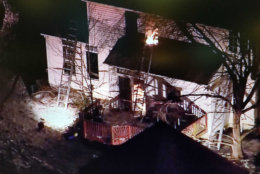 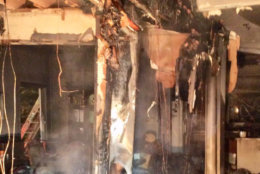 WASHINGTON — A man is dead and a woman and a 5-year-old boy are in critical condition after a Glen Burnie, Maryland, fire just before midnight Wednesday.

The fire was one of a number of fires that kept Maryland and Virginia firefighters busy early Thursday.

The deadly fire — the cause of which is still unclear — was contained to the basement of 415 Wellham Ave., and brought under control quickly after a number of people called 911 to report the blaze.

“It appears that it started in the basement; it was all contained in the basement. We brought the fire under control in about 30 minutes and it doesn’t look like the fire extended to the first floor at all,” said Anne Arundel County fire spokesman Russ Davies.

All three were rescued from the basement. The man, in his 40s, was in cardiac arrest and died, Davies said. He was pronounced dead at Baltimore Washington Medical Center.

The cause of the fire is under investigation by members of the Anne Arundel County Fire Department Fire and Explosives Investigation Unit.

Battling blazes in the winter is more difficult for firefighters.

“Anytime a child is involved it makes it more difficult. And then with the cold, as soon as you start spraying and pumping water, the pavement freezes up; the ladders freeze up; water freezes up on your gear. It just adds an element of difficulty in performing the rescues and providing care and doing extinguishment,” Davies said.

In Fairfax County, Virginia, eight people had to be rescued from balconies of a burning apartment building in Bailey’s Crossroads. All are OK, according to fire department tweets.

The fire started in the 3400 block of Carlin Springs Road shortly after 5:30 a.m.

Fairfax Fire Assistant Chief Herb Knerr said firefighters found “significant” fire from the second to the third floor. About 50 people have been displaced. The cause is still being determined.

In Virginia’s Arlington County, a fire occurred in a ninth-floor apartment in a high rise in the 4300 block of Old Dominion Drive. The fire marshal is investigating the cause.

#FinalUpdate: Apartment fire on 9th floor is out. No extension. Searches and ventilation complete. No injuries reported. Fire Marshal on scene investigating. Most units being placed in service and residents returning to building. pic.twitter.com/UPCYTgd535

The fire left one person without a place to live, but there were no serious injuries as a fire burned through the floor. One firefighter fell through a floor and was quickly rescued, according to tweets from Montgomery County fire spokesman Pete Piringer.

In the Herndon area of Fairfax County, two people had to be taken for treatment of smoke inhalation after a fire at a house in the 12100 block of Westwood Hills Drive.

Three people were home when the fire started. All got out safely.

Firefighters were on the scene a little after 6:30 a.m. and had to fire under control two hours later.

In Prince George’s County, Maryland, firefighters responded to a kitchen fire at a house in the 1900 block of Knoll Drive in Oxon Hill. No injuries were reported in the fire around 8:30 a.m. The cause has not been determined.

“It’s no secret that when temperatures go down the number of structure fires go up,” said Prince George’s County fire spokesman Mark Brady. 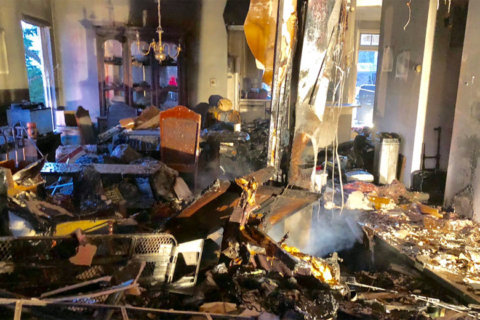