With the cold weather, firefighters across the region are finding conditions outside to be brutal. Fire departments are offering advice and reminders so you don't lose everything you own in a blaze that could have been prevented.
Listen now to WTOP News WTOP.com | Alexa | Google Home | WTOP App | 103.5 FM

SILVER SPRING, Md. — As a cold snap continued to push wind chills below zero, firefighters braved the brutal conditions Thursday as they responded to several fires in houses and apartment buildings across the D.C. region.

Winter is typically the busiest season for firefighters, but this particular stretch of frigid weather has made their strenuous jobs even more challenging.

“The streets and sidewalks freeze up,” explained Pete Piringer, a spokesman for the fire department in Montgomery County, Maryland. “Not only does it make it hazardous to walk around, but it makes our gear and equipment more difficult to use.”

As crews spray water, they became coated with ice.

“Frostbite and hypothermia are a major concern,” Piringer said. “Just getting a patient to an ambulance can be a challenge because of the elements.”

One of the fires that broke out in Montgomery County Thursday caused $750,000 in damage in Germantown.

Investigators said it was sparked by a space heater.

“The most prevalent word of caution is to give a space heater space,” Piringer said, noting that heaters should be at least 3 feet away from anything that can catch fire.

People who use portable heaters are urged to plug them directly into a wall outlet, rather than using an extension cord.

“Make sure that your heater is placed on a level, hard and non-flammable surface — not on rugs or carpets,” added Piringer.

If folks have fireplaces, Piringer urges them to dispose of the ashes properly. When the ashes are cool, they are supposed to go into a metal container with a lid and be placed outside a safe distance away.

“Never discard hot ashes inside or near a home,” Piringer said.

And nobody should use the heat from a stove or oven to heat a room, Piringer warned.

“Not only is that a safety hazard, but it also can be a source of potentially toxic fumes — carbon monoxide,” said Piringer. 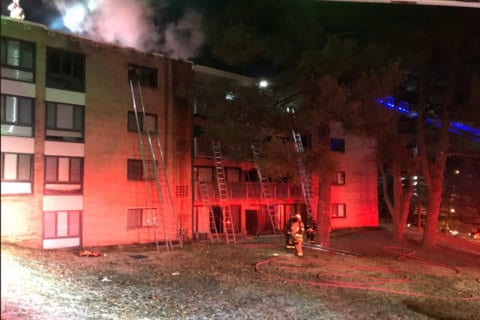