If you want a healthy gut, new research shows you can skip the probiotic pills, and instead, chow down on some crickets.
Listen now to WTOP News WTOP.com | Alexa | Google Home | WTOP App | 103.5 FM

WASHINGTON — If you want a healthy gut, new research shows you can skip the probiotic pills, and instead, chow down on some crickets.

A recently published study in the journal Scientific Reports shows that consuming crickets can help support the growth of good gut bacteria, which scientists have found influences, even improves, health conditions and health outcomes. 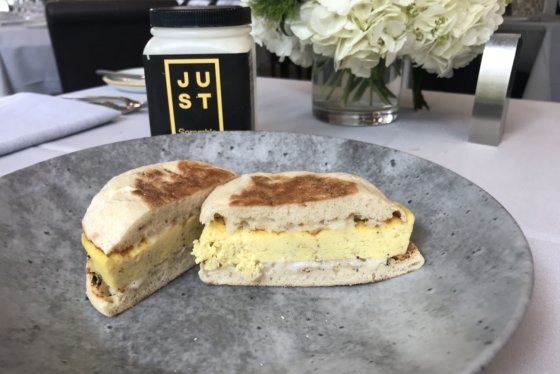 It looks like egg, tastes like egg, even scrambles like egg. But it’s made from a bean. The latest plant-based alternative product hits the market, and one local chef is embracing it.

Nearly 2 billion people around the world eat insects, and that number will likely grow as the global population inches toward 9 billion by 2050 and consumers look to more sustainable food sources.

According to the Food and Agriculture Organization of the United Nations, edible insects need six times less feed than cattle and emit less greenhouse gases and ammonia than conventional livestock.

Valerie Stull, the lead author on the published paper, said insects are nutrient dense and high in protein, and unlike eggs, chicken or beef, they contain fiber, predominantly in the form of chitin from their exoskeletons.

Diets rich in fiber are shown to improve health in a number of ways, including reducing one’s risk for cardiovascular disease and diabetes.

But fiber also feeds the gut.

“Dietary fibers are those indigestible dietary carbohydrates that we eat and our body doesn’t absorb, but they’re actually the primary food or energy sources for the microbes in our gut,” said Stull, an incoming postdoctoral researcher at the Global Health Institute at the University of Wisconsin-Madison.

“So basically the fiber that we’re getting in our diet is shaping the growth of microbes in our gut.”

In the double-blind, randomized crossover trial, Stull and her team fed 20 healthy, college-aged men and women a breakfast that either contained 25 grams of powdered cricket meal or didn’t for two weeks. Then, all the participants ate a normal diet for two weeks, followed by another two weeks of cricket cuisine. The researchers analyzed blood and stool samples before, during and after the study to look at the impact of the insects on gut health.

Stull said there were no dramatic changes in the gut bacteria, “which is actually pretty good because the study wasn’t very long and we didn’t change people’s entire diets.”

“So if we had seen something super dramatic, we might have been a little worried,” she added.

What the researchers did find was an increase in the abundance of one probiotic species, Bifidobacterium animalis, which Stull said has been associated with a number of positive health outcomes and is even available commercially as BB-12.

Still, she said more research is needed to better understand the direct relationship between edible insects and the good bacteria in our bodies.

“The microbiota in our gut, there’s a lot of research that demonstrates that it responds to changes in our diet, to nutritional cues in our diet, and those bacteria go on to generate hormonelike signals that influence our physiology, our nutritional status, our metabolism, our immune system — even our overall well-being and mental health can be influenced by the microbiome,” Stull said.

“So what we eat really matters.”

True, it may be a few more years before you can pick up grasshoppers at the grocery store, but insect protein is crawling more into the mainstream. Diners at José Andrés’ Oyamel restaurant will find sauteed grasshopper tacos on the menu, and retailers are packing their shelves with cricket protein bars and powder.)

“Twenty to 30 years ago, really no one in the U.S. was eating sushi or raw fish, but now it’s quite posh, it’s popular, you can get sushi at a gas station in Nebraska,” Stull said.

“It’s amazing how quickly our cultural food tradition has changed around sushi.”

If the idea of biting into a bug still causes you to squirm, Stull suggests testing the waters with cricket powder, which “is actually really great to bake with or to add to a smoothie in a morning, just like you would a soy powder or a whey powder.”