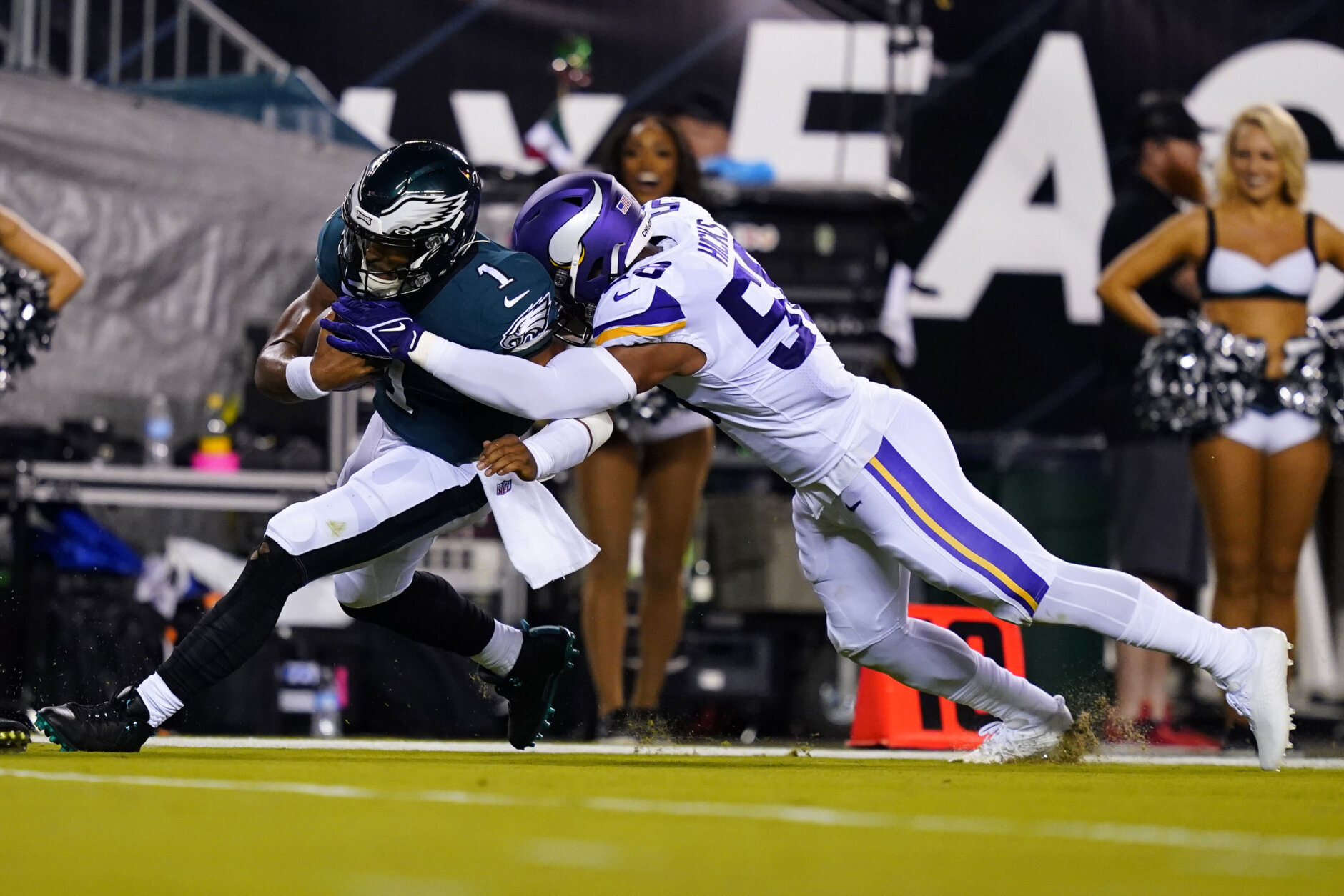 If Jalen Hurts can shred a Minnesota defense that shut down Aaron Rodgers, what do you think he’s gonna do to the struggling Commanders defense? Philly might force FedEx Field to add a third digit to the visitor’s side of the scoreboard.

Former Washington quarterback Kirk Cousins found the Eagles defense more times than his favorite receiver and is now 2-10 on Monday Night Football, the worst MNF record in NFL history. With Rodgers aging and no other true threats in the NFC North, the Vikings have to be careful not to blow a championship window on this terrible investment. 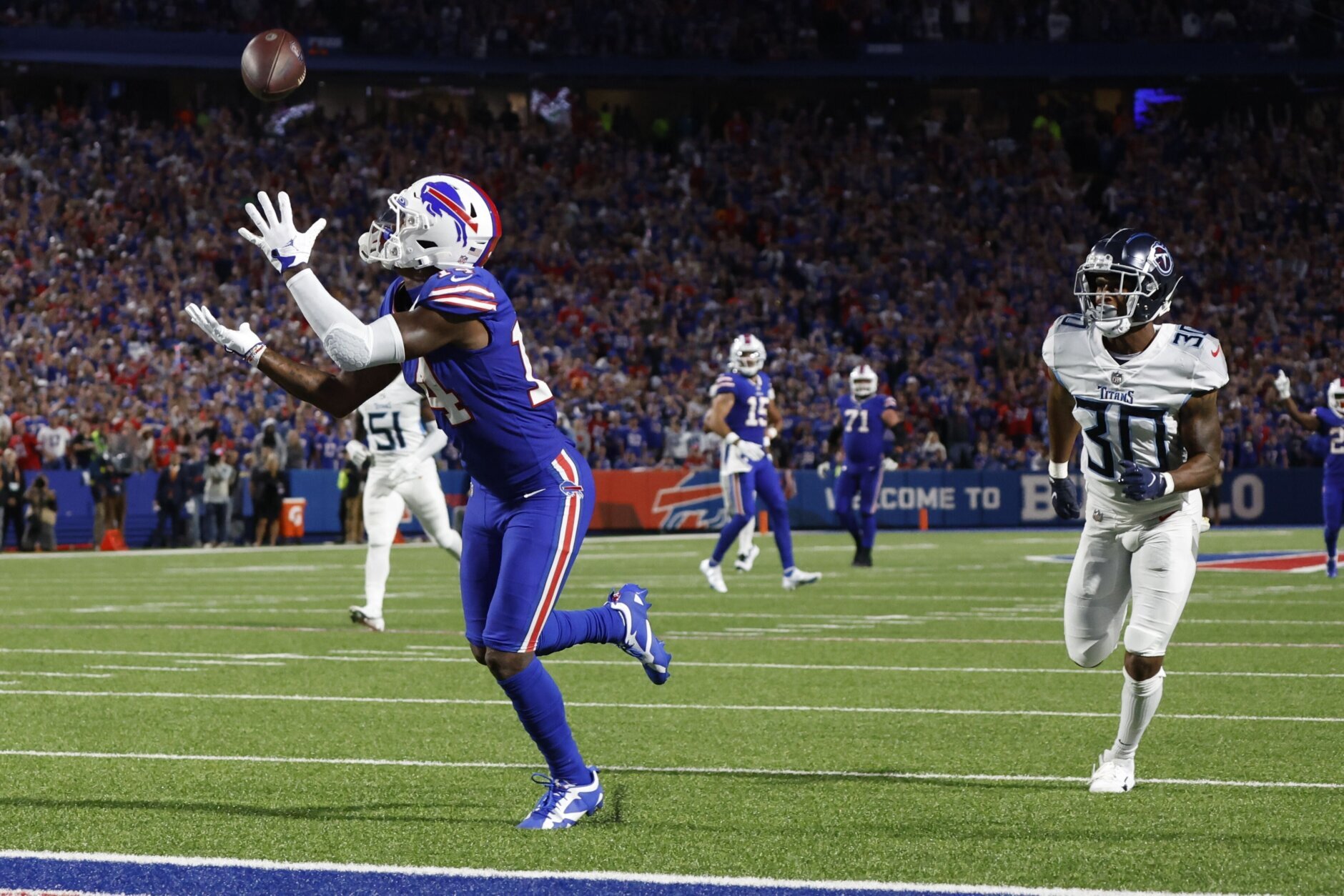 Look, I’m not gonna overreact because Buffalo had damn near two weeks to prepare for this game … but the Bills look like a juggernaut on their way to a Monday night win decades in the making. If they’re even half this good in a South Beach showdown with the Dolphins next week, I like my Super Bowl prediction a lot more — especially with Stefon Diggs repping the DMV like he is. 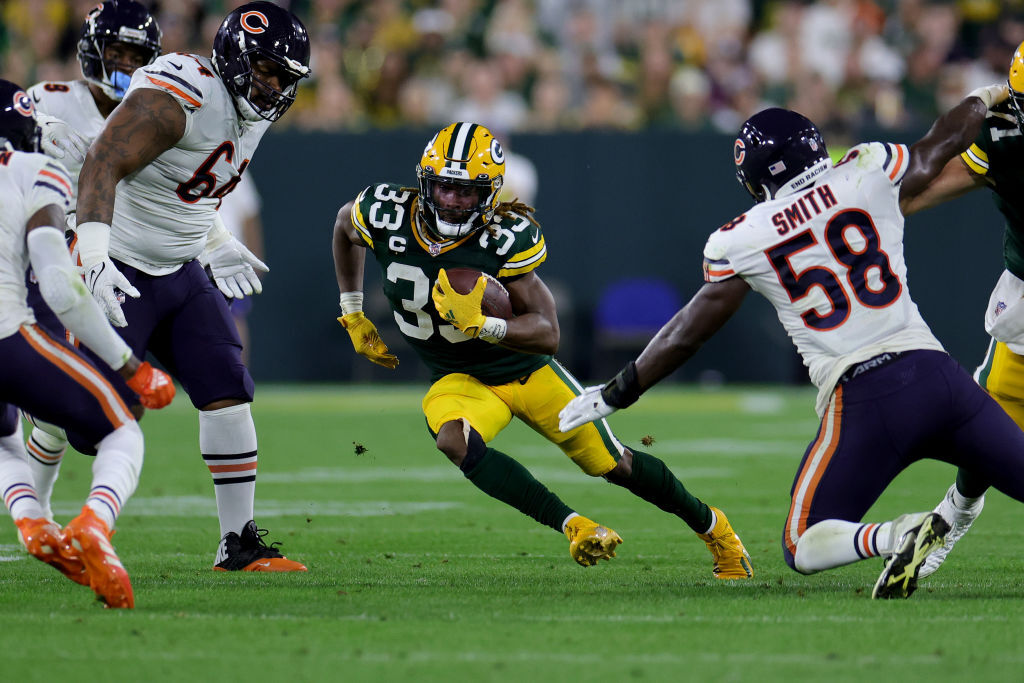 3/16
GREEN BAY, WISCONSIN — SEPTEMBER 18: Aaron Jones #33 of the Green Bay Packers runs the ball during the second half in the game against the Chicago Bears at Lambeau Field on September 18, 2022 in Green Bay, Wisconsin. (Photo by Stacy Revere/Getty Images)

The late, great Vince Lombardi is not only pleased to see his Packers pull back within one of the Bears for the NFL’s winningest franchise but the way Green Bay did it — by outrushing Chicago 203-180 with his tried and true game plan. 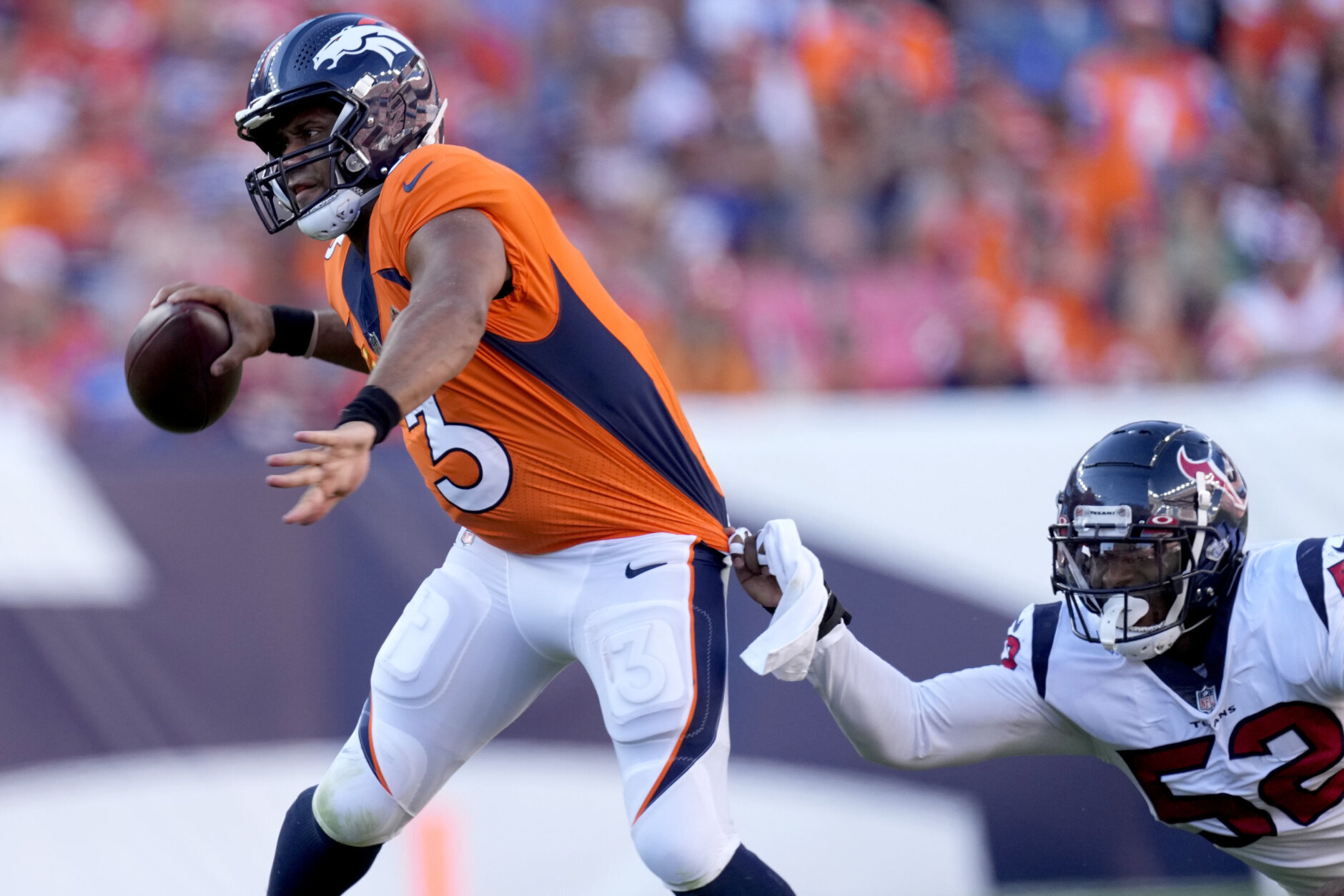 Look, I know Denver won’t average 16 points all season … but for all the gushing about how Russ was gonna cook with all these ingredients, this is the slowest simmer I’ve seen since my last attempt at making homemade soup. 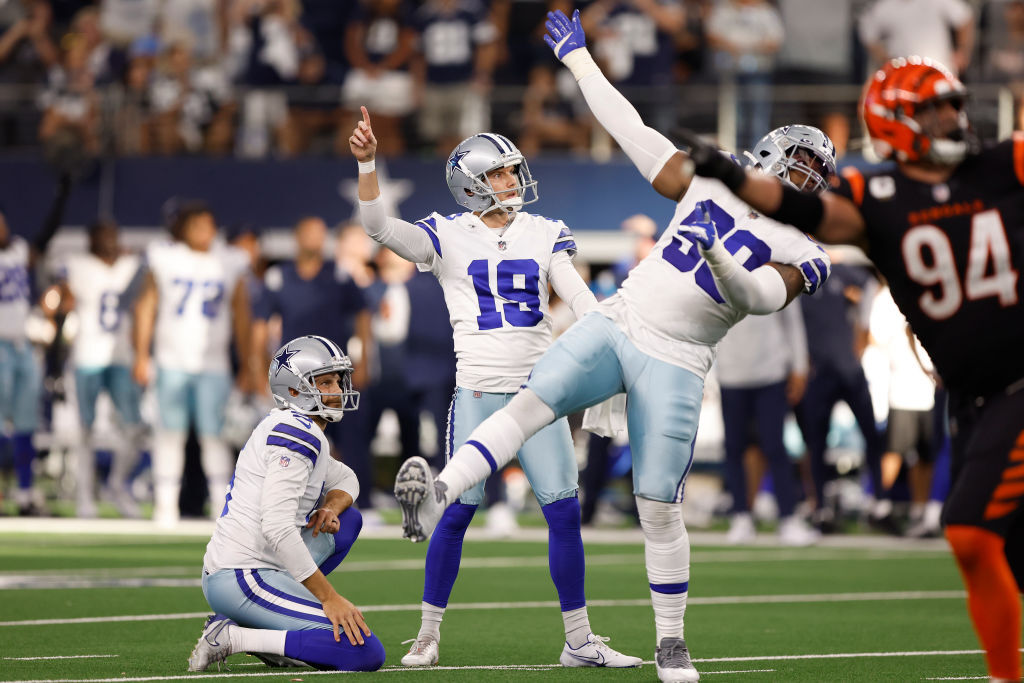 5/16
ARLINGTON, TEXAS — SEPTEMBER 18: Jalen Tolbert #18 of the Dallas Cowboys reacts after kicking a game-winning field goal against the Cincinnati Bengals during the fourth quarter at AT&T Stadium on September 18, 2022 in Arlington, Texas. (Photo by Wesley Hitt/Getty Images)

We live in a world where Cooper Rush has never lost a start, Trevon Diggs makes back-to-back clutch plays in coverage that stops a Joe Burrow rally and gets Brett Maher in position to make a game-winning 50-yard field goal. I hate it here. 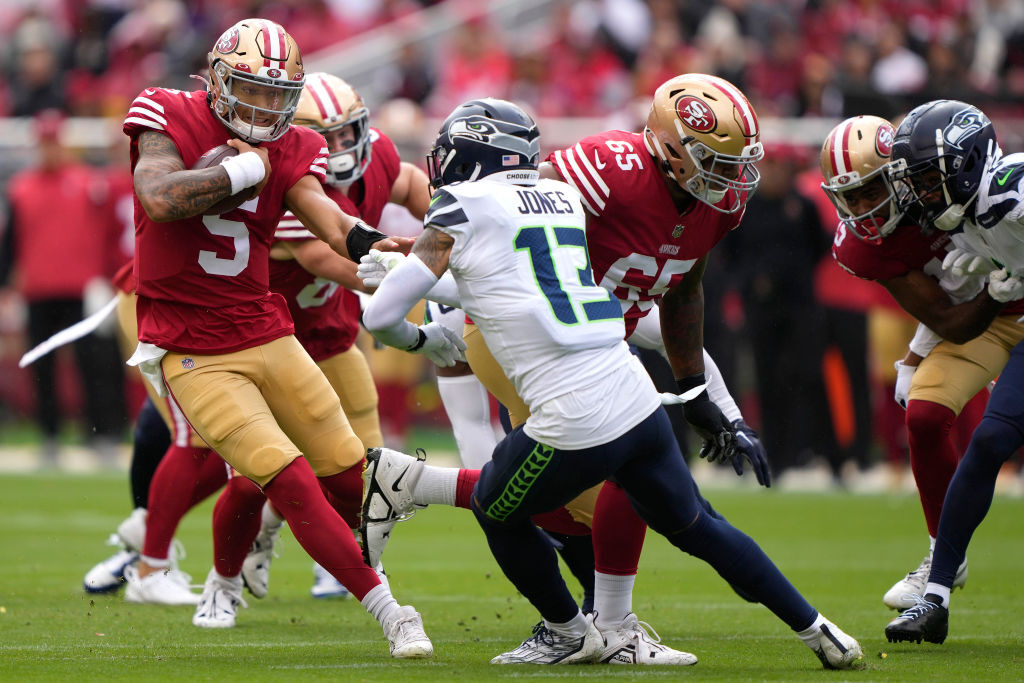 6/16
SANTA CLARA, CALIFORNIA — SEPTEMBER 18: Trey Lance #5 of the San Francisco 49ers runs with the ball against Josh Jones #13 of the Seattle Seahawks during the first quarter at Levi’s Stadium on September 18, 2022 in Santa Clara, California. (Photo by Thearon W. Henderson/Getty Images)

I don’t ever want to spin another man’s misfortune as anything but that … but Trey Lance’s season-ending ankle injury may have bailed San Fran out of a very difficult situation with the second-year passer and Jimmy Garoppolo. It’s Jimmy G’s team in 2022 and the Niners have to be thanking the sweet baby Jesus they didn’t trade him away. 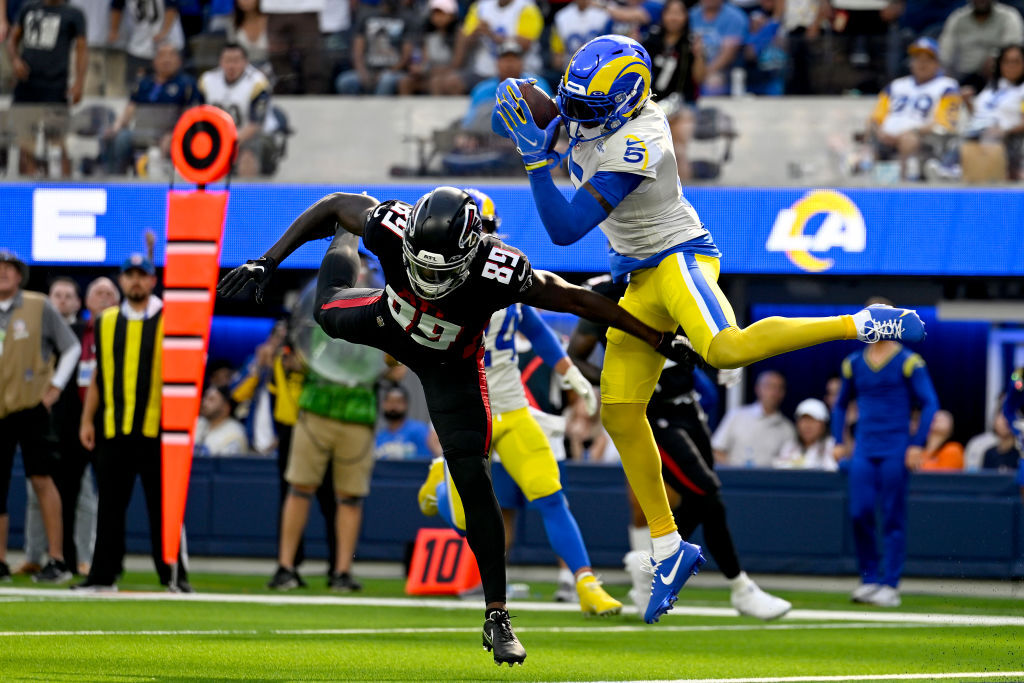 7/16
INGLEWOOD, CALIFORNIA — SEPTEMBER 18: Jalen Ramsey #5 of the Los Angeles Rams intercepts a pass intended for Bryan Edwards #89 of the Atlanta Falcons during the fourth quarter at SoFi Stadium on September 18, 2022 in Inglewood, California. (Photo by John McCoy/Getty Images)

In a week full of reminders of Atlanta’s epic 28-3 Super Bowl failure … they, at one point, trailed 28-3 in L.A. The Falcons are who we thought they were and the Rams still aren’t. 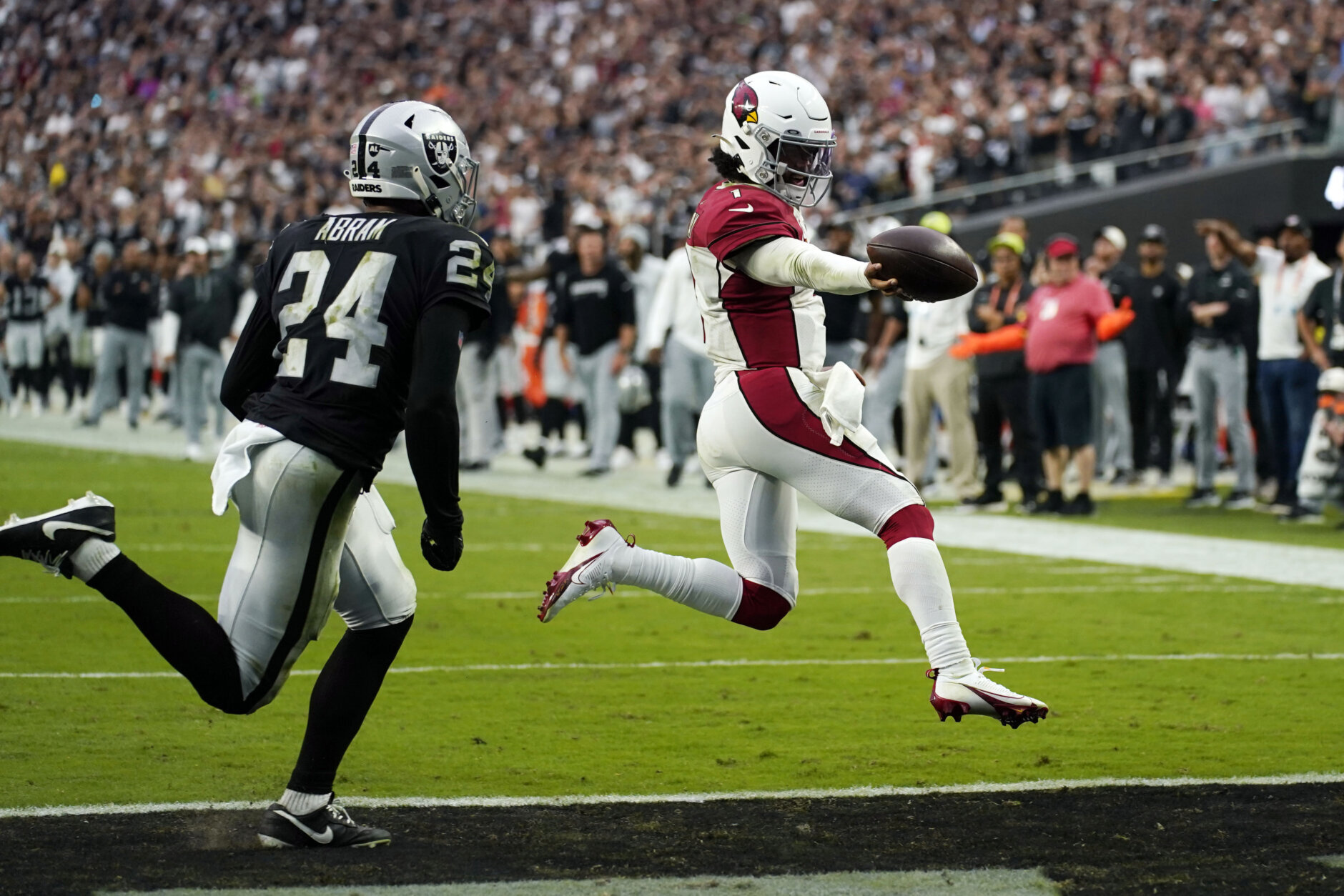 8/16
Arizona Cardinals quarterback Kyler Murray runs in for a touchdown as time expires during the fourth quarter of an NFL football game against the Las Vegas Raiders Sunday, Sept. 18, 2022, in Las Vegas. (AP Photo/John Locher)

A team more focused and intentional doesn’t fall behind by 20 in the first half. But give Arizona credit for joining Miami to become the first tandem of teams to erase 20-point fourth-quarter deficits on the same day thanks to Kyler Murray running a mile on one play.

According to NFL Next Gen Stats, Kyler Murray ran a total distance of 85.69 yards on this successful 2-point conversion rush. https://t.co/rkzCWxBaUg 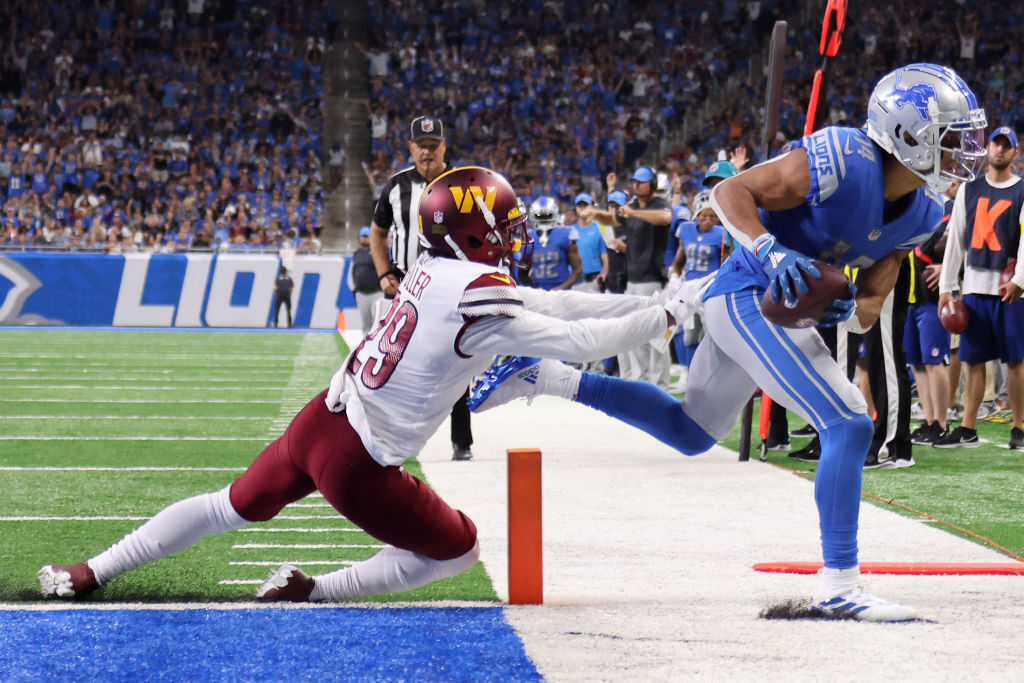 9/16
DETROIT, MICHIGAN — SEPTEMBER 18: Amon-Ra St. Brown #14 of the Detroit Lions scores a touchdown against Kendall Fuller #29 of the Washington Commanders during the fourth quarter at Ford Field on September 18, 2022 in Detroit, Michigan. (Photo by Gregory Shamus/Getty Images)

It’s time to start calling Washington the “Commaners” because there’s no D. In what figures to be the easiest stretch of the Burgundy and Gold’s schedule, the defense has surrendered an average of 29 points and allowed 157 rushing yards per game with an even worse 7.5 yards per carry. For all the talk of Carson Wentz proving himself in Washington, I’d love just one reason why Jack Del Rio should be here even one more minute.

But as Ron Rivera said, give Detroit credit. The Lions have scored 35+ points in back to back games for the first time since 1952, and Amon-Ra St. Brown (in addition to having perhaps the best name in sports) has a lot to do with that, setting an NFL-record six straight games with at least eight catches and a score. If the Lions defense ever gets some bite, this team might actually be kind of good. 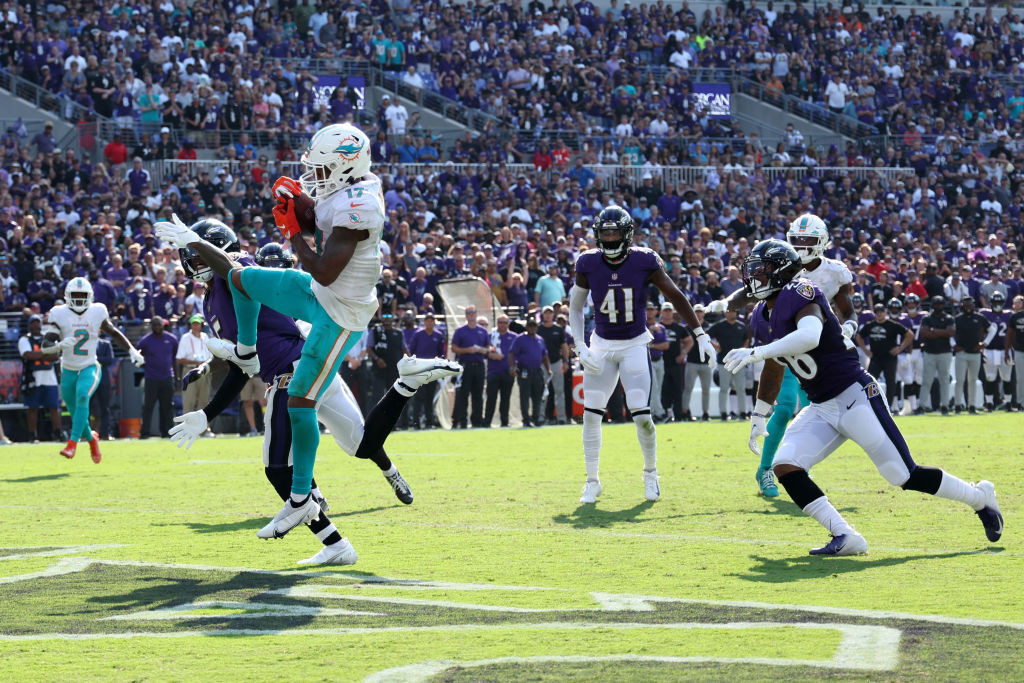 The Ravens did not turn the ball over, only have one penalty for five yards, scored 38 points at home, and somehow still lost. This one will take some time to unpack. 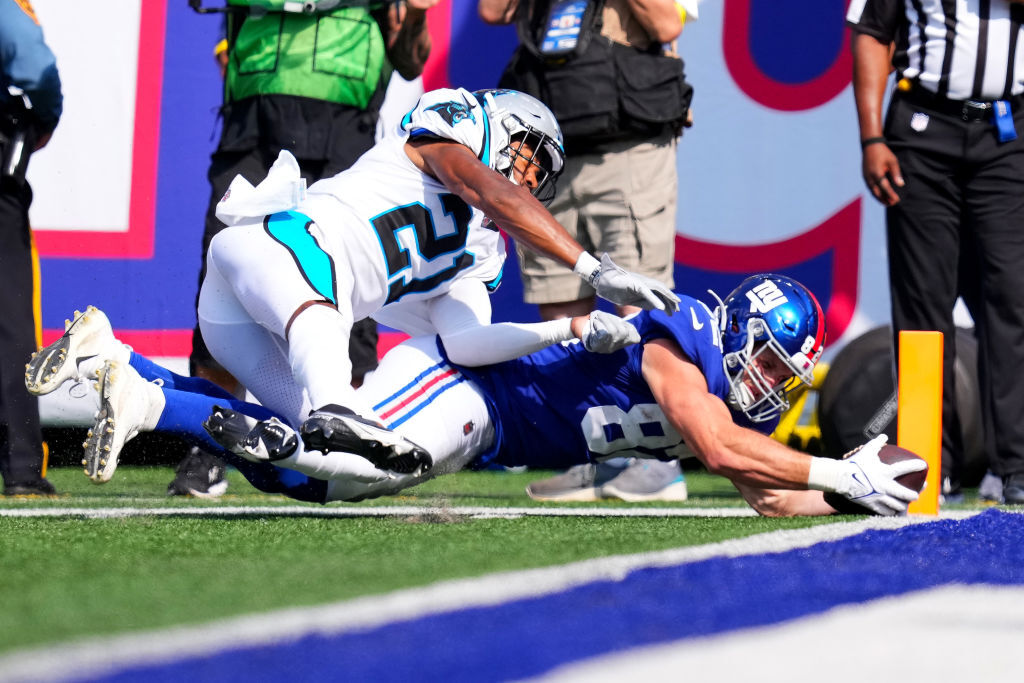 Is Carolina bad or just unlucky? The Panthers are the first team to allow a go-ahead 55+ yard field goal in the fourth quarter/overtime in consecutive games, but those games maybe don’t come down to the very end if Baker Mayfield plays better than mediocre. They’d better find out during these three straight home games.

Meanwhile, Big Blue is surprisingly atop the NFC East at 2-0 — and there’s a real case for the Giants to start 5-0. This might be the NFL’s worst-to-first story of 2022. 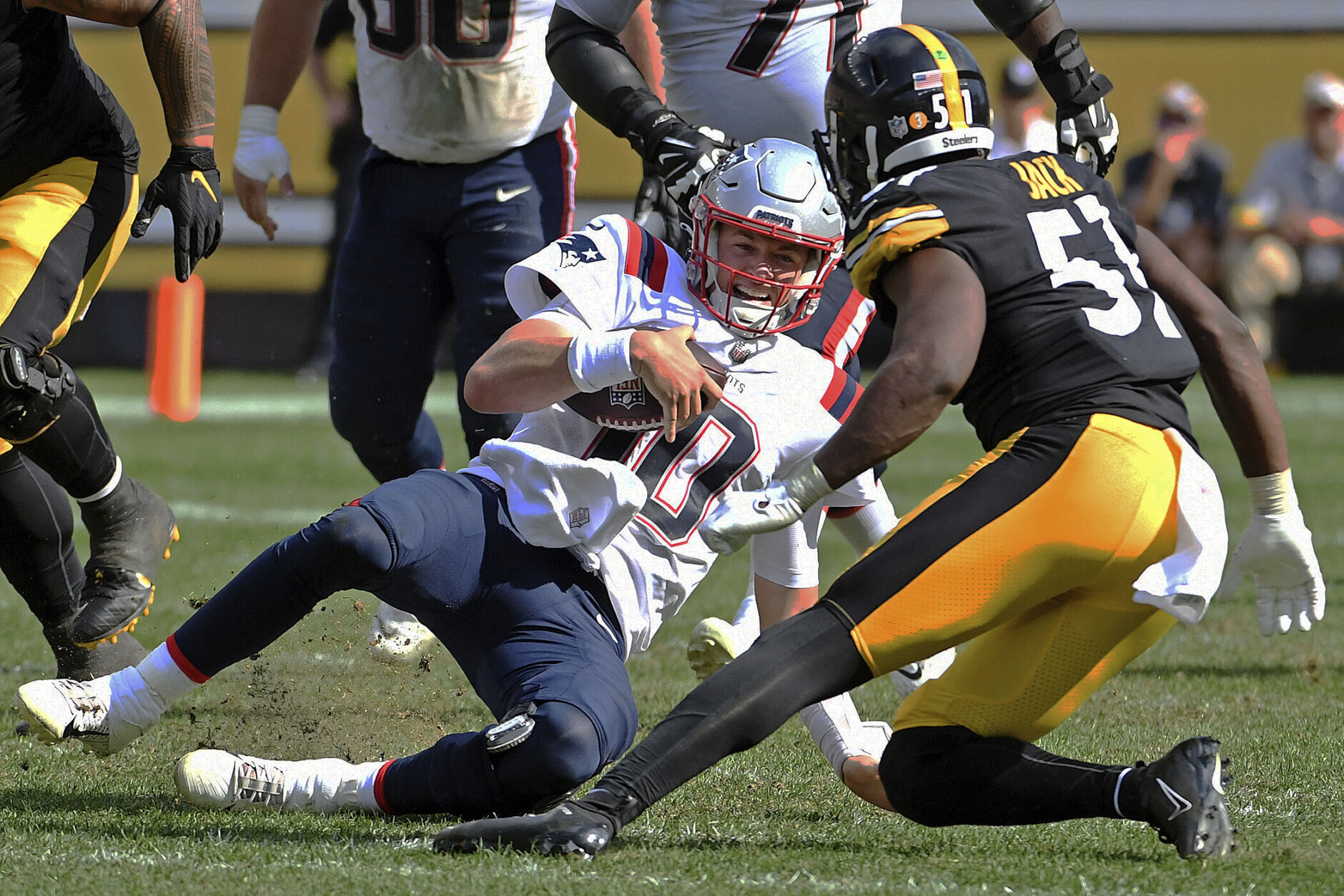 Mac’s back held up enough to outduel Mitch Trubisky, but this was more a Pittsburgh choke than the Pats seizing victory. Bill Belichick suffers career loss No. 100 on his home field next week against the Ravens. Book it. 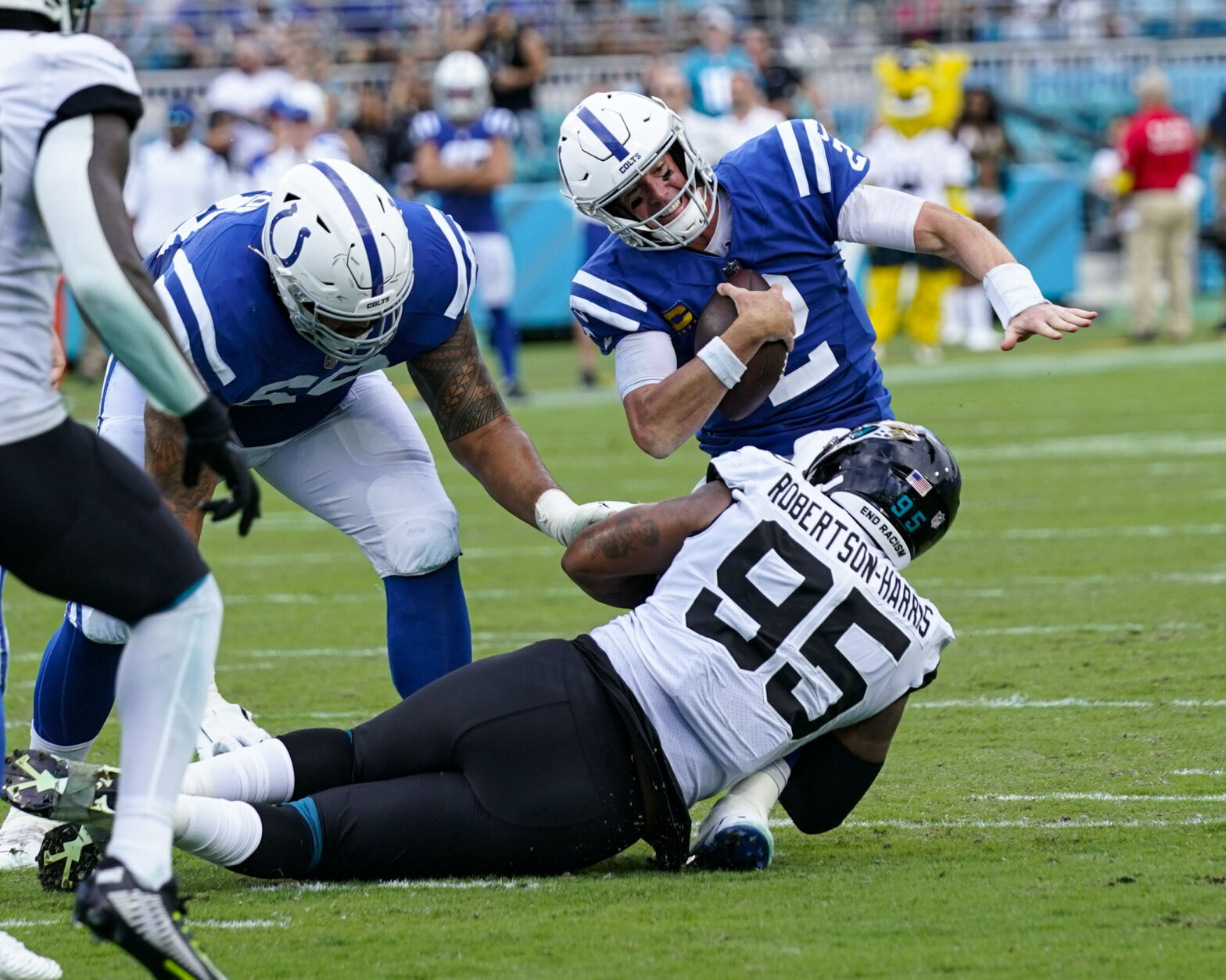 Guess it wasn’t Wentz’s fault, after all?

Matt Ryan looked decidedly worse than the last No. 2, tossing three picks and taking five sacks in the Colts’ eighth straight loss in Jacksonville (three of them shutouts!). They may insist it’s more aberration than jinx, but this is a full-on trend. 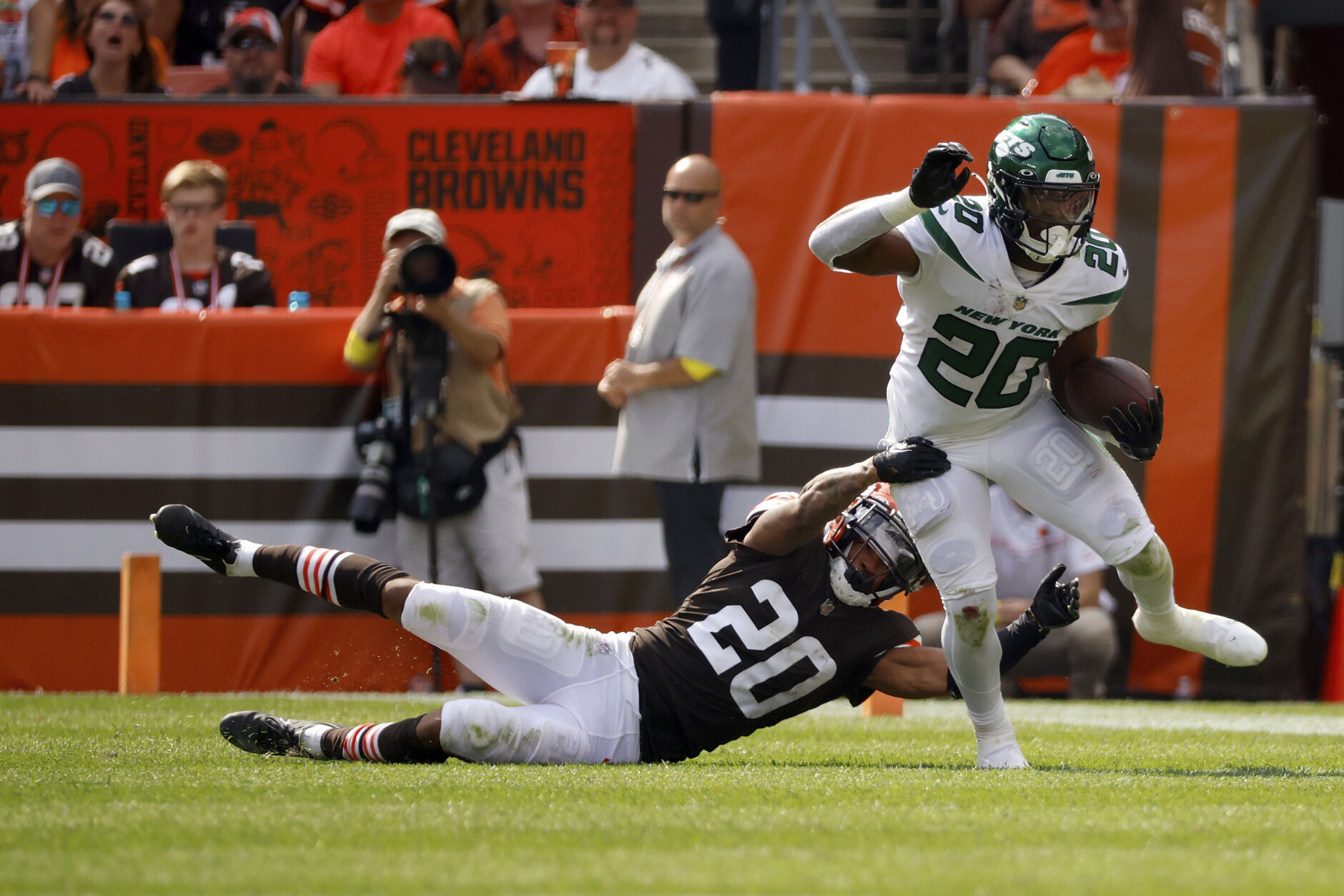 Cleveland had its first 2-0 start since “The Curse of Kosar”  in hand but sullied Brownie the Elf’s (good?) name with one of the greatest choke jobs we’ve seen since … the Browns. The Factory of Sadness is printing more misery while the Jets might be printing receipts sooner than we think. 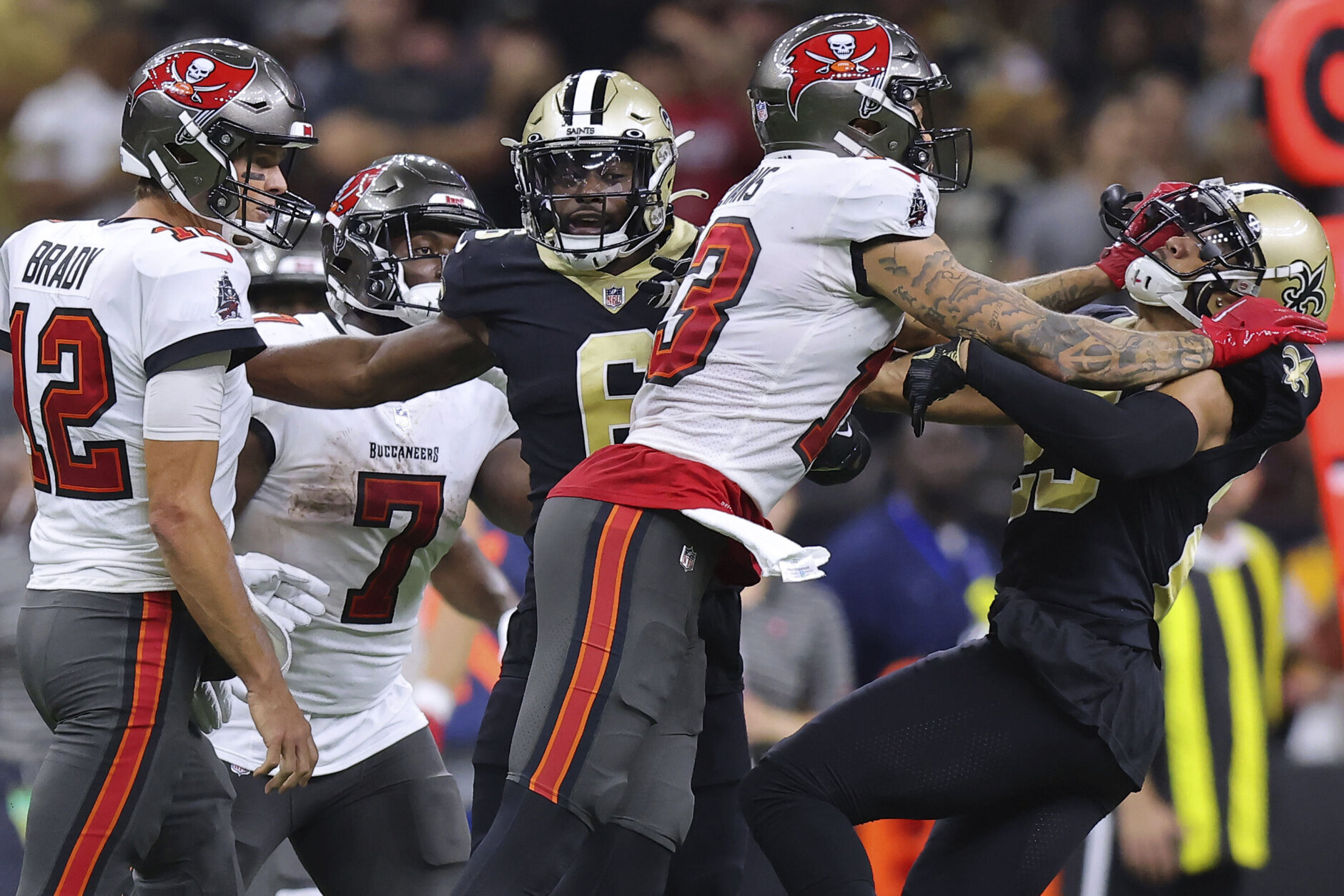 While Todd Bowles was right about this rivalry, it’s worth adding that a rivalry ain’t a rivalry until there’s a contentious, chippy contest between them like the ejection-filled game Sunday. Mark your calendar for Monday night’s rematch Dec. 5. 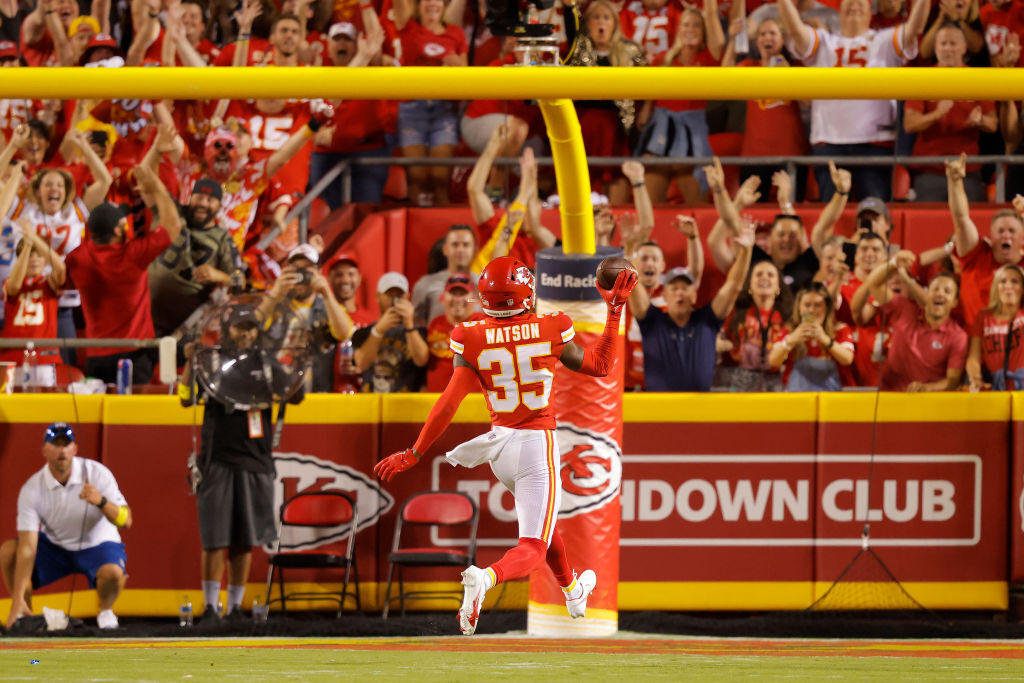 16/16
KANSAS CITY, MISSOURI — SEPTEMBER 15: Jaylen Watson #35 of the Kansas City Chiefs returns an interception 99-yards for a touchdown during the fourth quarter against the Los Angeles Chargers at Arrowhead Stadium on September 15, 2022 in Kansas City, Missouri. (Photo by David Eulitt/Getty Images)

As much as I wanted to make this about another ridiculous Patrick Mahomes play, there was no better story than seventh-round rookie Jaylen Watson going from Wendy’s drive thru to the man with the longest go-ahead score in the fourth quarter by a rookie in NFL history. Talk about fast food.