A bunch of reunions, potential season-altering injuries and a major conflict of interest highlight the NFL Week 1 Recap. 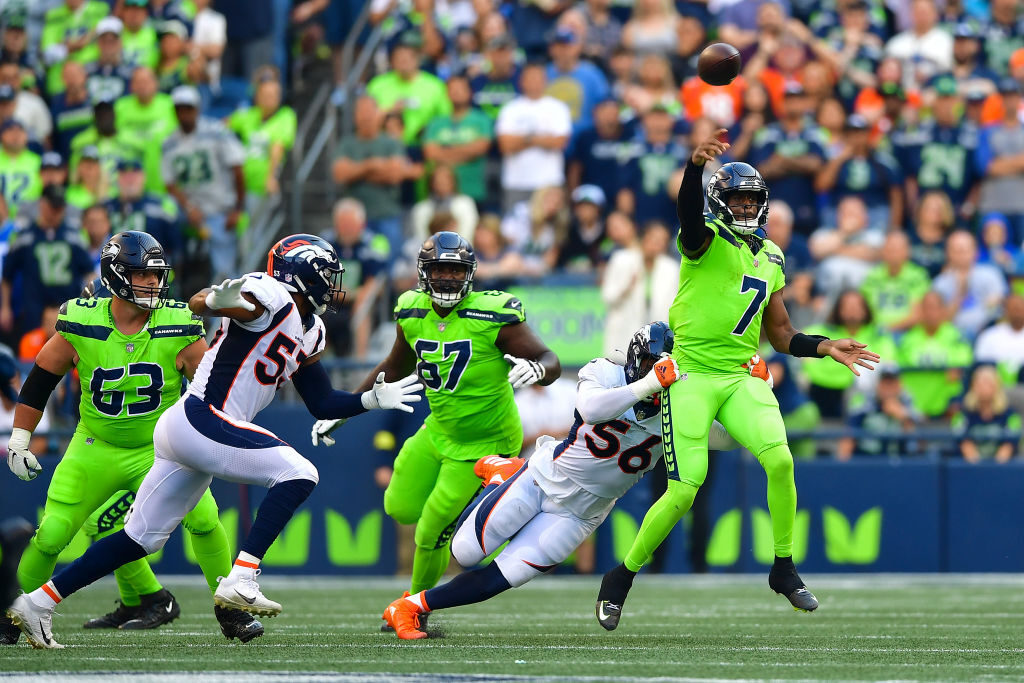 1/16
SEATTLE, WASHINGTON – SEPTEMBER 12: Geno Smith #7 of the Seattle Seahawks throws under pressure from Baron Browning #56 of the Denver Broncos during the second quarter at Lumen Field on September 12, 2022 in Seattle, Washington. (Photo by Jane Gershovich/Getty Images)

Ok, let me get this straight Denver … you give up a record haul of picks and players to get Russell Wilson, and then in his very first game … in his old stomping grounds … in primetime … with the game on the line … you try a 64-yard field goal with Brandon McManus?! Maybe the Broncos should have given all those picks to Baltimore for Justin Tucker instead.

(And, Nathaniel Hackett might be the first coach to ever land on the hot seat after only one game.)

But give Geno Smith his props — dude waited eight years in between Week 1 starts and all he did was shut up everyone who thought the Seahawks were joking about him being the starter. If he consistently plays like this in 2022, Seattle won’t only be much better than advertised — they’ll show they made Wilson, not the other way around. 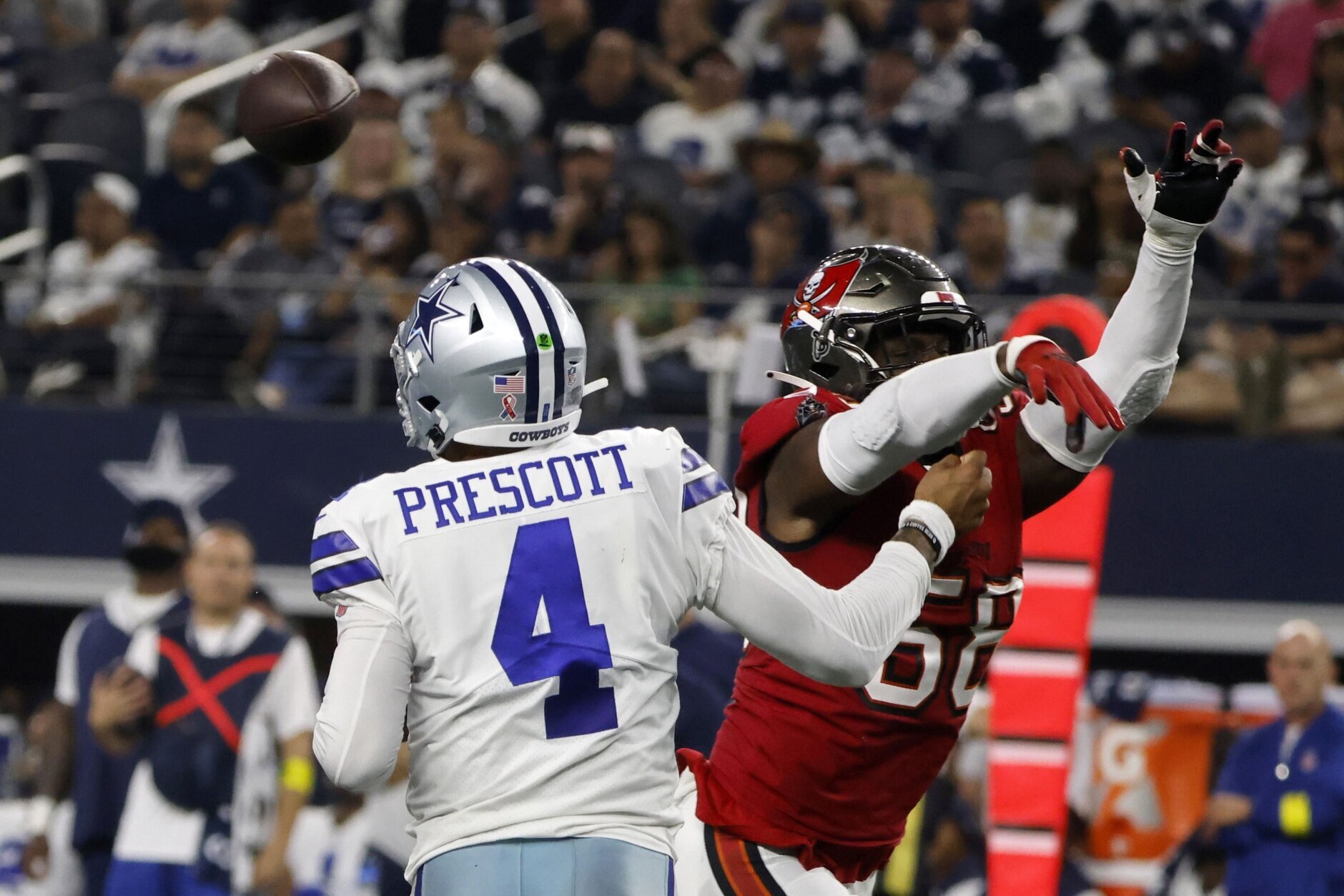 The NFL is so unpredictable that it can schedule the first-ever Week 1 meeting between the top two scoring offenses from the prior season and get a field goal-riddled, prime-time snoozefest.

But Dallas fans got another rude awakening from Dak Prescott — first it was the shoes, now it’s his throwing hand sporting an injured thumb his boss says needs surgery, which sounds a lot like Dak will be sidelined just long enough for the Cowboys to fall way behind in a division that, after only one week, looks more competitive than previously thought.

If Dallas, WITH Dak could only muster the second-worst Week 1 scoring output in franchise history, what happens if they have to go an extended period with Cooper Rush running the offense? Football season in Texas might be over before it fully begins. 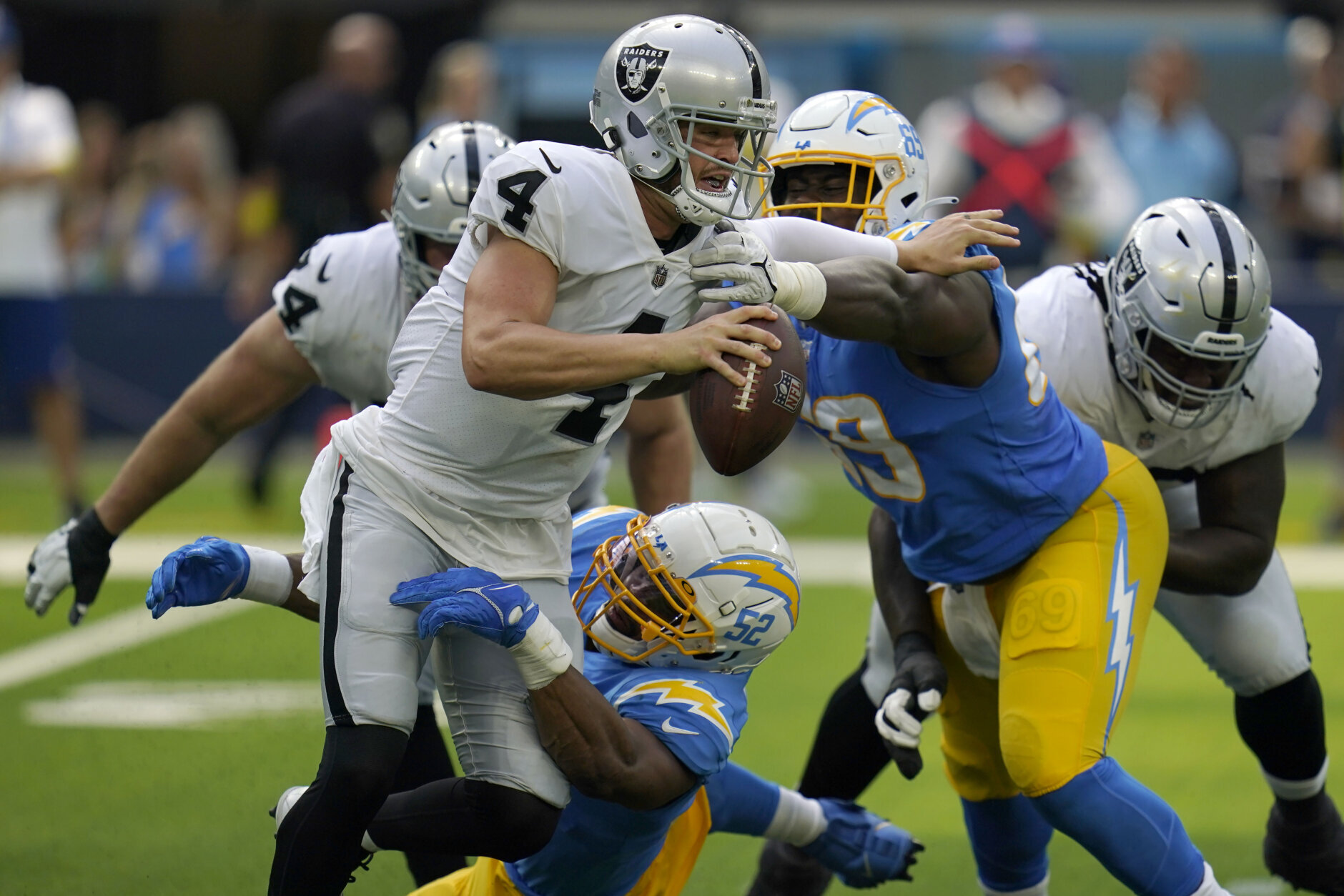 For a guy not playing with a grudge against his old team, Khalil Mack sure did wreck his buddy Derek Carr. This game seems like a microcosm of what football season in Las Vegas will be: Carr putting up some nice stats throwing to his real buddy, Devante Adams, but the Raiders coming up on the losing end of the proverbial AFC West stick. 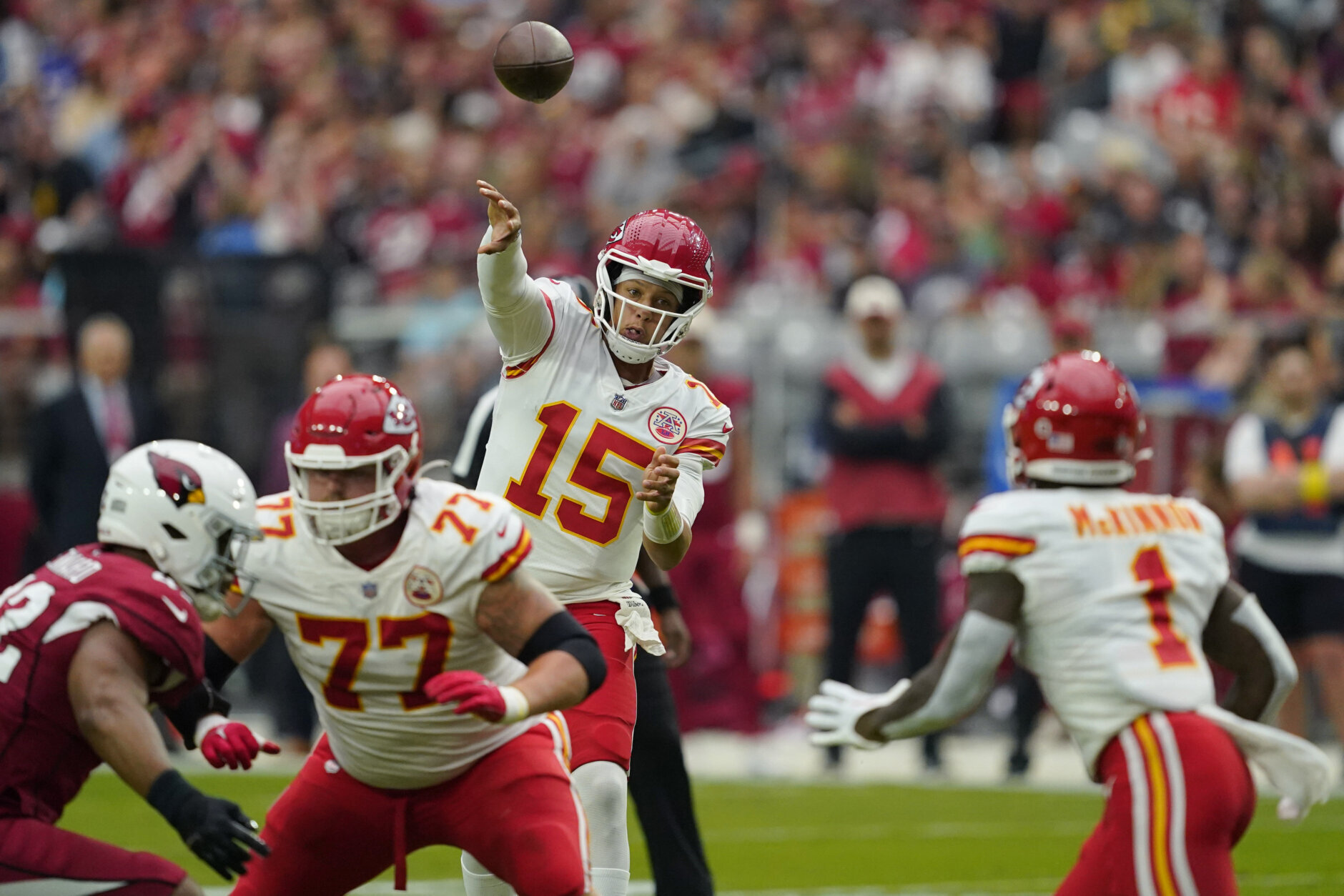 Sure things in life: Death, taxes and Patrick Mahomes ballin’ out of his mind in September.

Also a sure thing: Kliff Kingsbury is getting fired. This comment might have just ensured it’ll happen in-season. 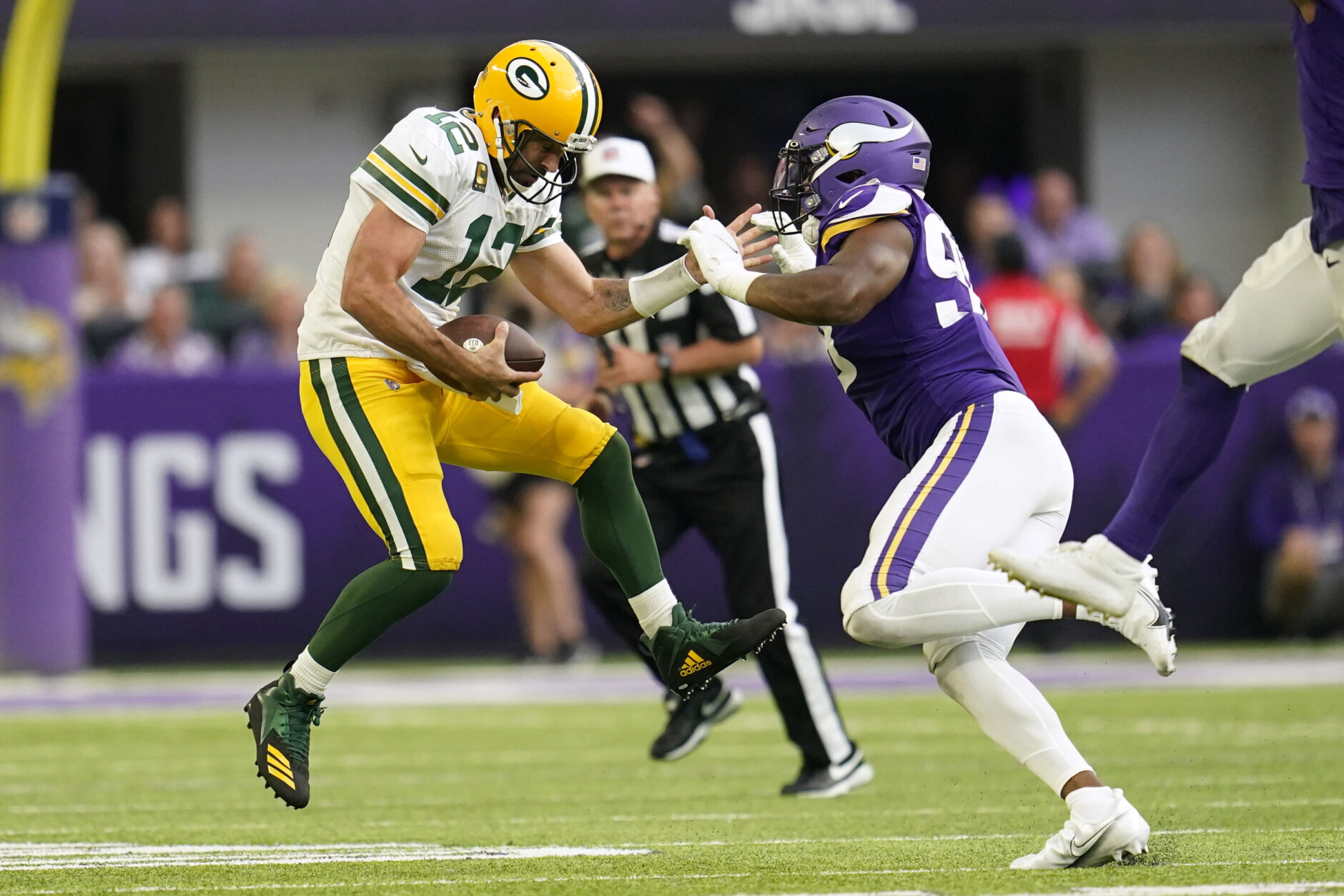 Look, Aaron Rodgers was playing without his starting tackles and perhaps his best receiver. So I don’t want to overblow this result (especially considering they lost way worse to start last season), but throwing his first pick against a division opponent since 2020, and getting held without a touchdown and under 200 passing yards, shows Green Bay could be in for a loooong season.

It also shows that Minnesota might be poised to steal the NFC North sooner rather than later. If Justin Jefferson can replicate Sunday’s monster game in prime-time in Philadelphia Week 2, I might just have to change my thinking about the Vikings.

The only player with more 150-yard receiving games at age 23 or younger in NFL history? Randy Moss (6). pic.twitter.com/BYYMcX2sDQ 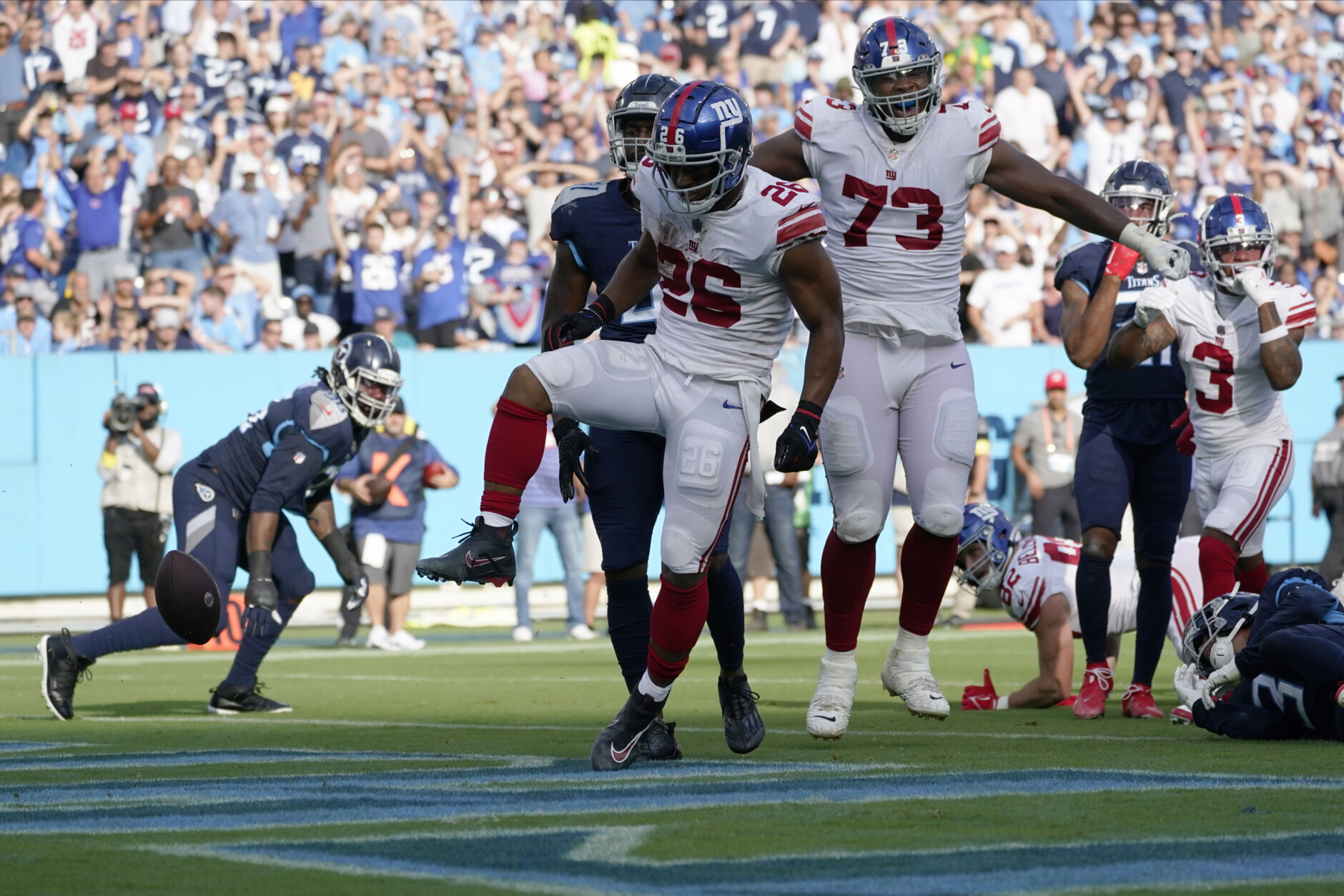 6/16
New York Giants running back Saquon Barkley (26) celebrates his touchdown run during the second half of an NFL football game against the Tennessee Titans Sunday, Sept. 11, 2022, in Nashville. (AP Photo/Mark Humphrey)

If Tyreek Hill thinks his coach has, um, intestinal fortitude, he should see what Brian Daboll did in his debut. Eschewing the game-tying extra point for the game-winning two-point conversion is something we saw backfire here in Washington (ironically, against the Giants), but it’s a great way to win over a locker room desperate for quality leadership. If Big Blue can answer the big question at QB, I fear this team — with a healthy Saquon Barkley running wild with a chip on his shoulder — could be better than expected.

Plus, you know it’s not your day when Derrick Henry is out here getting hit with his own medicine. 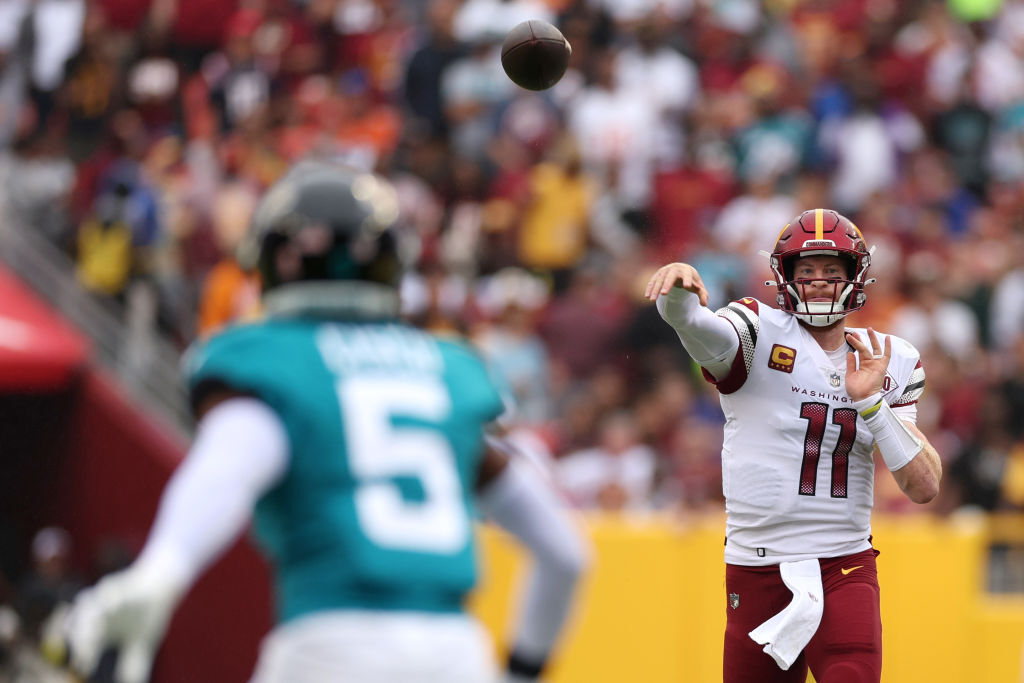 7/16
Quarterback Carson Wentz #11 of the Washington Commanders passes against the Jacksonville Jaguars during the first quarter at FedEx Field on Sept. 11, 2022 in Landover, Maryland. (Photo by Patrick Smith/Getty Images)

Of all the Week 1 debuts, Carson Wentz may have had the most on-brand. Only the Carson Wentz Experience gives you two great touchdown passes sandwiched around interceptions on consecutive throws in a game in which he becomes the first Washington QB to throw for four touchdowns in his first game in Burgundy and Gold. 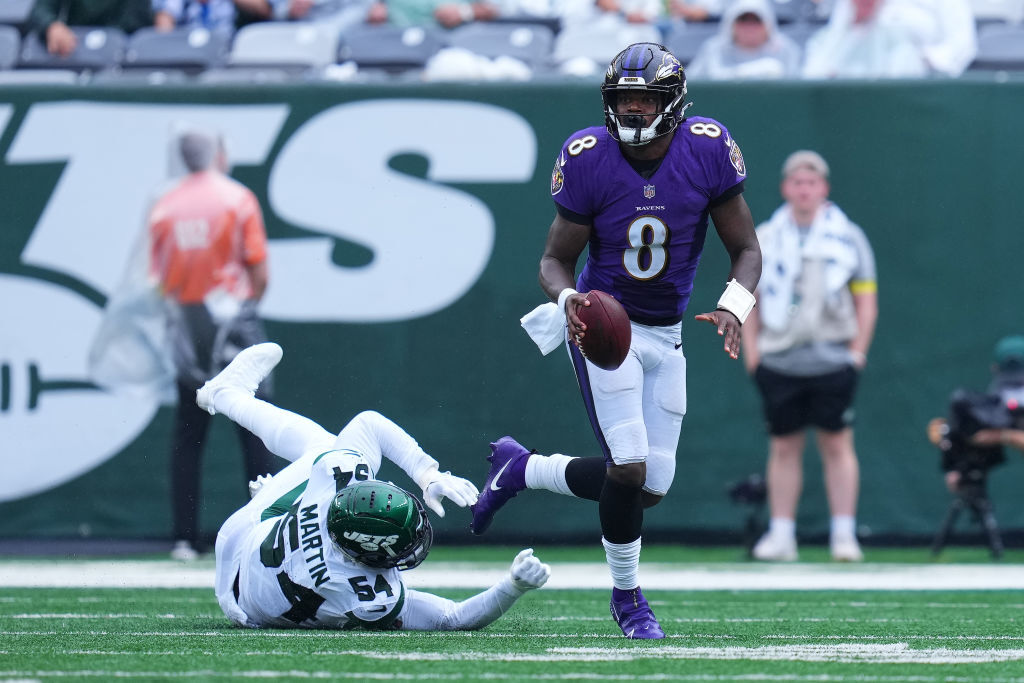 8/16
Lamar Jackson #8 of the Baltimore Ravens avoids a tackle from Jacob Martin #54 of the New York Jets at MetLife Stadium on Sept. 11, 2022 in East Rutherford, New Jersey. (Photo by Mitchell Leff/Getty Images)

Lamar Jackson is betting big on himself, so what better way to kickoff this crucial season than to throw three touchdowns to his much-maligned receiving corps on a day when the vaunted Ravens rushing attack was held to just 63 yards? Consider this the first of many big games to come for Action Jackson. 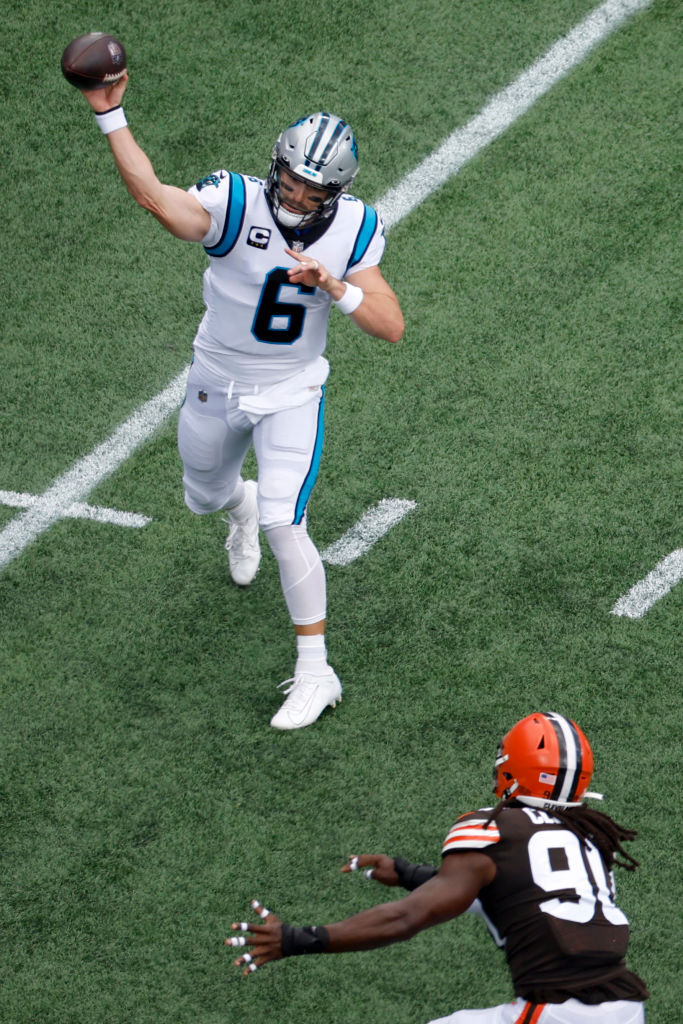 9/16
Quarterback Baker Mayfield #6 of the Carolina Panthers attempts a pass against defensive end Jadeveon Clowney #90 of the Cleveland Browns at Bank of America Stadium on Sept. 11, 2022 in Charlotte, North Carolina. (Photo by Jared C. Tilton/Getty Images)

Baker Mayfield was literally paid by his former team to beat them but was a 58-yard field goal short of his (alleged) mission to “F the Browns up.” Baker will have his moments but this is gonna be a long season for Carolina. 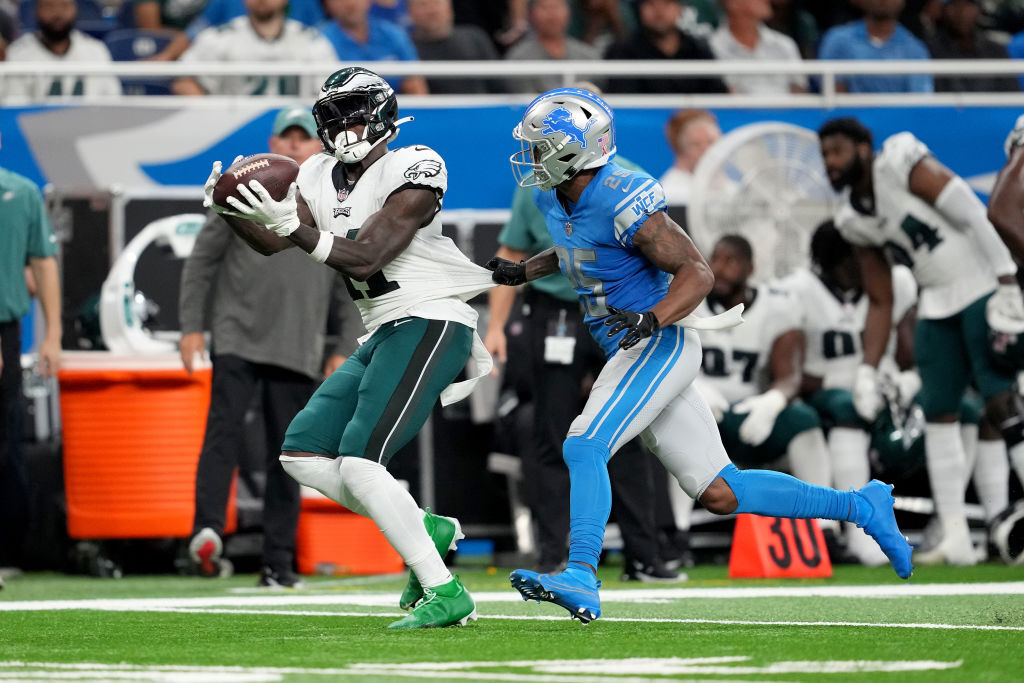 10/16
A.J. Brown #11 of the Philadelphia Eagles makes a reception against Will Harris #25 of the Detroit Lions during the game at Ford Field on Sept. 11, 2022 in Detroit, Michigan. (Photo by Nic Antaya/Getty Images)

I couldn’t help but look at this game from a Washington perspective — A.J. Brown had the fourth-most receiving yards in a debut with a new team to lead a Philly offense that also rushed for over 200 yards and had four touchdowns, while Detroit hung right there with the Eagles by scoring touchdowns in all four quarters. The Commanders will play each of these offenses in the next two weeks and I’m having a hard time seeing the Burgundy and Gold defense contain either. 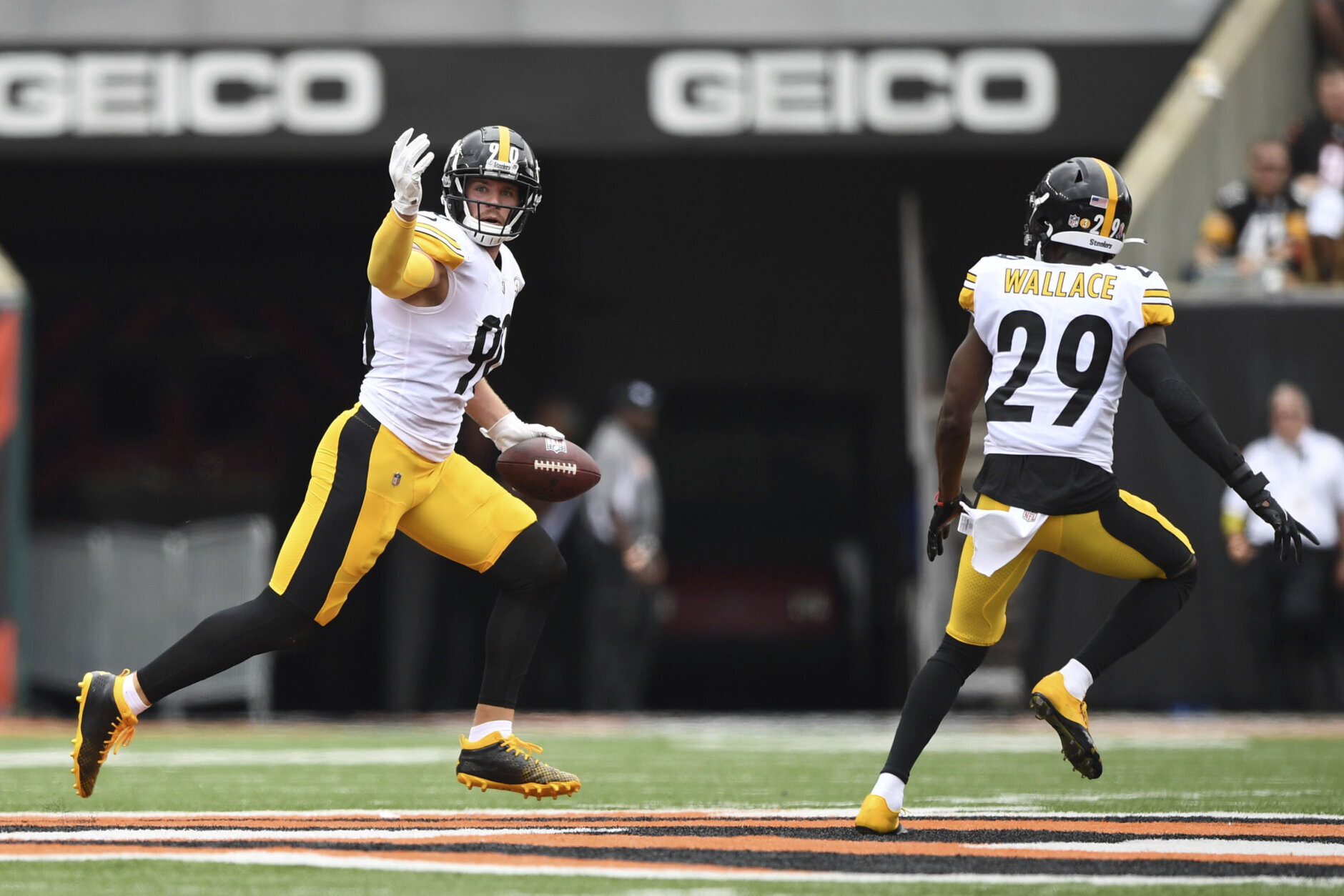 11/16
Pittsburgh Steelers linebacker T.J. Watt (90) celebrates an interception during the first half of an NFL football game against the Cincinnati Bengals, Sunday, Sept. 11, 2022, in Cincinnati. (AP Photo/Emilee Chinn)

This was a wild (and pyrrhic) victory for Pittsburgh but it’s also a reminder that Mike Tomlin’s Steelers are not to be underestimated.

But also, let’s be real — Cincinnati gagged this one away to clinch the first year in the 21st century in which the two Super Bowl teams from the previous year each lost their season opener. Super Bowl hangovers are real. 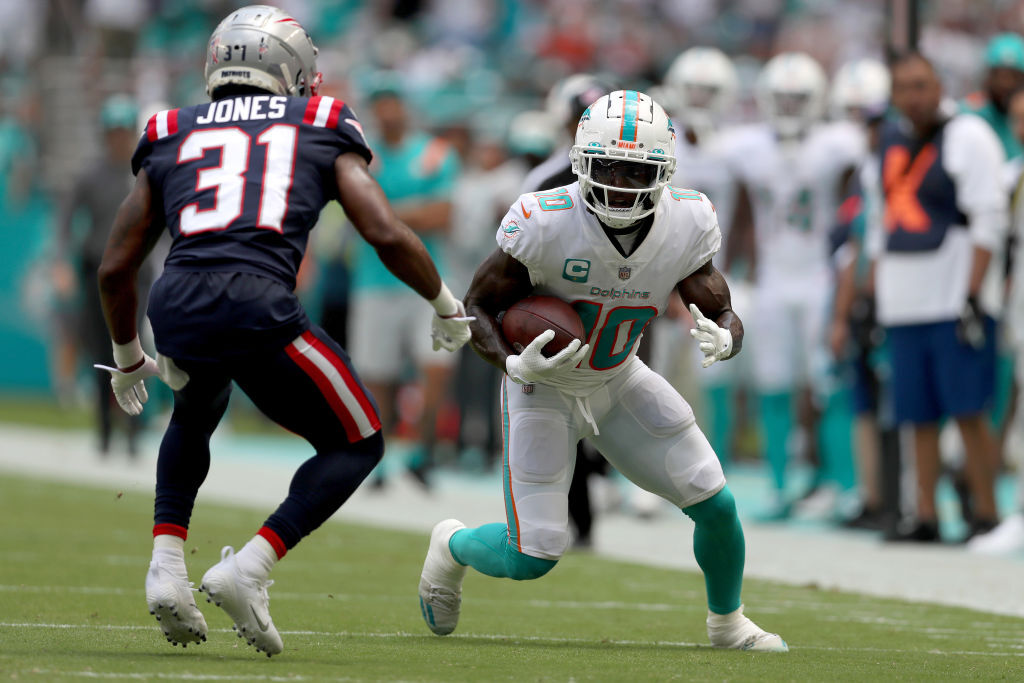 12/16
Tyreek Hill #10 of the Miami Dolphins carries the ball during the first quarter against the New England Patriots at Hard Rock Stadium on Sept. 11, 2022 in Miami Gardens, Florida. (Photo by Megan Briggs/Getty Images)

Pretty stunning stat: The Patriots are now 6-8 in their last 14 AFC East games, going back to the 2019 finale. And 4 of those 6 wins are over the Jets.

Of course, Miami had the Pats’ number well before that (the Fins have won eight of the last 10 meetings on South Beach) so while Bill Belichick keeps pulling the wrong levers, we need to see more empirical evidence of Mike McDaniels’ “cocojones.”

This is so awesome 🤣@justnfields (via @NFL)pic.twitter.com/NfT8EFwvdW

I could watch Justin Fields slide on the haters all day. But shame on the NFL — the league where a dude drove a whole snowplow across a field during a game 40 years ago — penalizing Chicago for a similar act during a monsoon on the worst turf this side of FedEx Field. 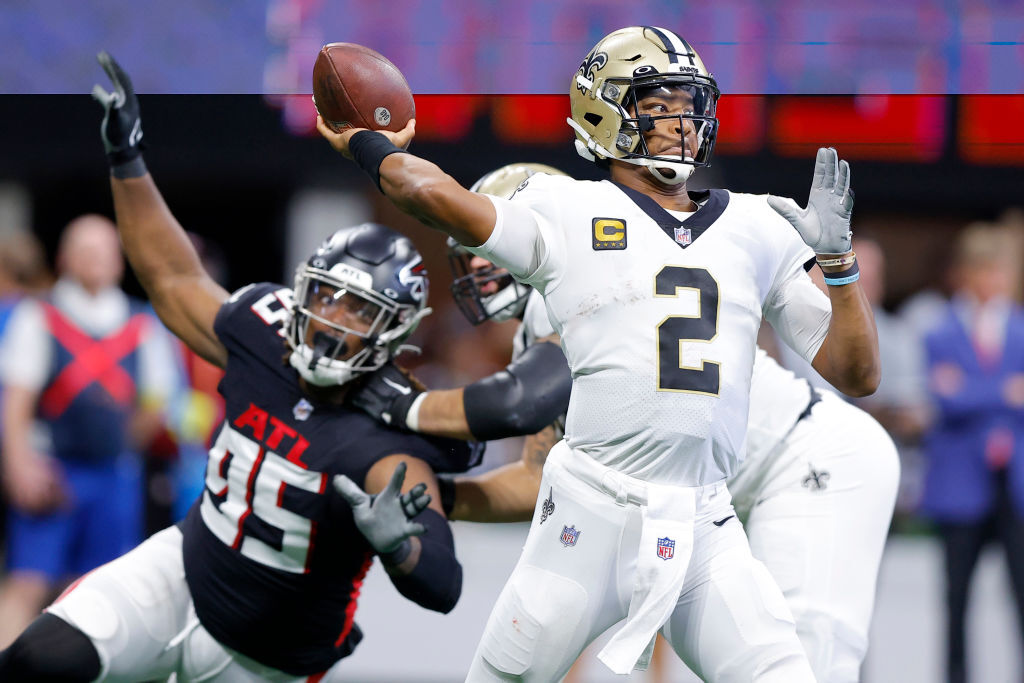 14/16
Jameis Winston #2 of the New Orleans Saints throws a pass during the second quarter against the Atlanta Falcons at Mercedes-Benz Stadium on Sept. 11, 2022 in Atlanta, Georgia. (Photo by Todd Kirkland/Getty Images)

Someone tell Arthur Smith we can only write the obituary of someone who was alive. Atlanta hasn’t been relevant since arrival and doesn’t seem likely to ever be while he’s at the helm.

Arthur Smith then ended his postgame press conference after a few questions with a walk-off: “You buried us in May. Bury us again. We don’t care. We’ll get back to work.” https://t.co/ipIJboD9lJ pic.twitter.com/rW8One9uDA

Also, give Jameis Winston his flowers for this fourth quarter line: 13 of 16 for 212 yards and two touchdowns to lead New Orleans to victory in his first game back from a season-ending injury. Winston might just have me eating my words before we even reach midseason. 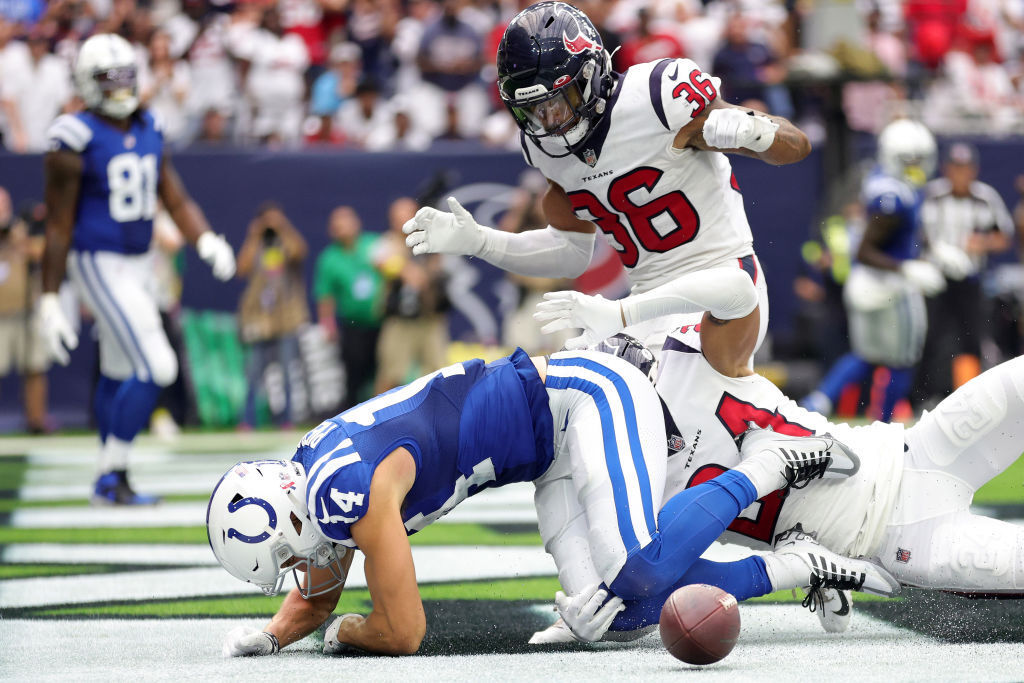 15/16
Alec Pierce #14 of the Indianapolis Colts unable to hold onto the ball ahead of Jonathan Owens #36 of the Houston Texans during the fourth quarter at NRG Stadium on Sept. 11, 2022 in Houston, Texas. (Photo by Carmen Mandato/Getty Images)

I’ve ranted about ties here many times over the years so I’ll suffice it to say: If you play a game with no result, you get no recapping in this recap. 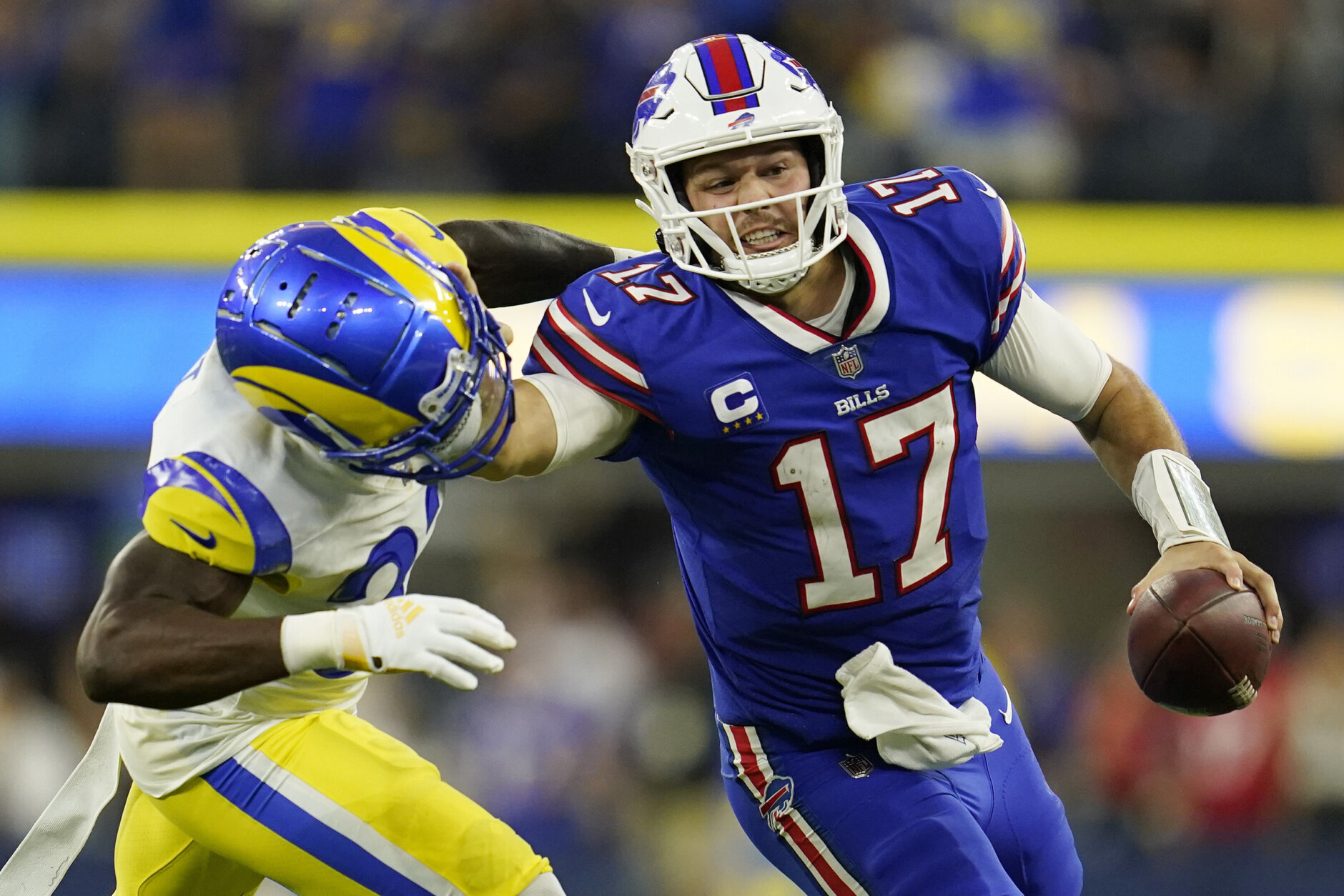 For whatever reason Buffalo is the Super Bowl front-runner, it’s impressive that this was the fourth time in the last six Bills games that their punter had the night off. Josh Allen has been clowning Jalen Ramsey for years, but Thursday night’s rebuttal happened to be the second-biggest beatdown of a defending champion in their opener. Take that for data.