A happy homecoming, unbelievable upsets, and the greatest touchdown that never was make for an enjoyable — and stat-filled — NFL Week 11 Recap. 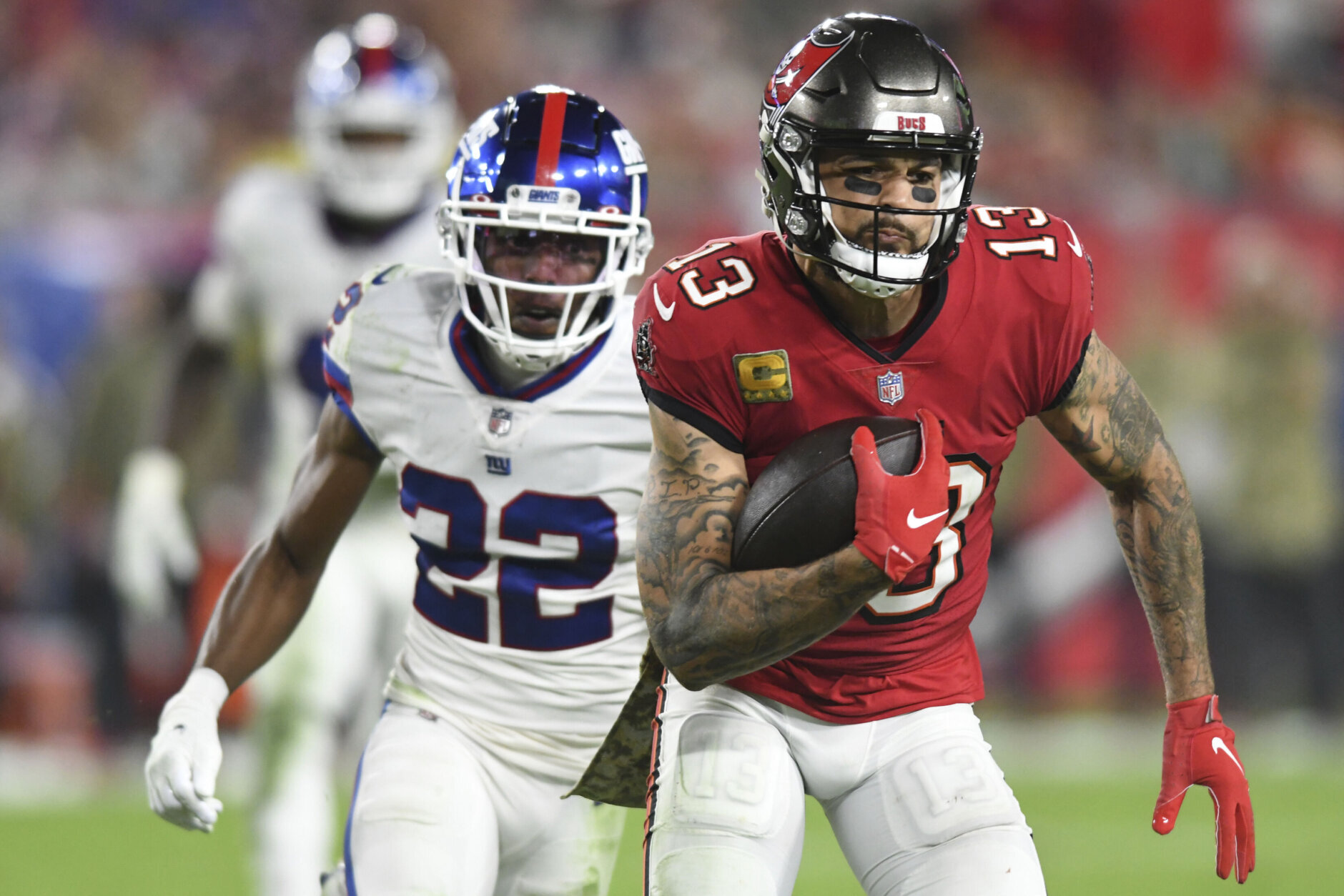 On a night when Tom Brady extended his ridiculous record of 288 straight games without a three-game losing streak and Daniel Jones dropped to 0-8 in primetime, a receiver stole the show: Mike Evans passed Mike Alstott for the Bucs’ franchise touchdown record, which is wild considering receivers typically score less frequently than 90s-era running backs. Take a moment to imagine what Evans’ career would be if he had Brady the whole time. 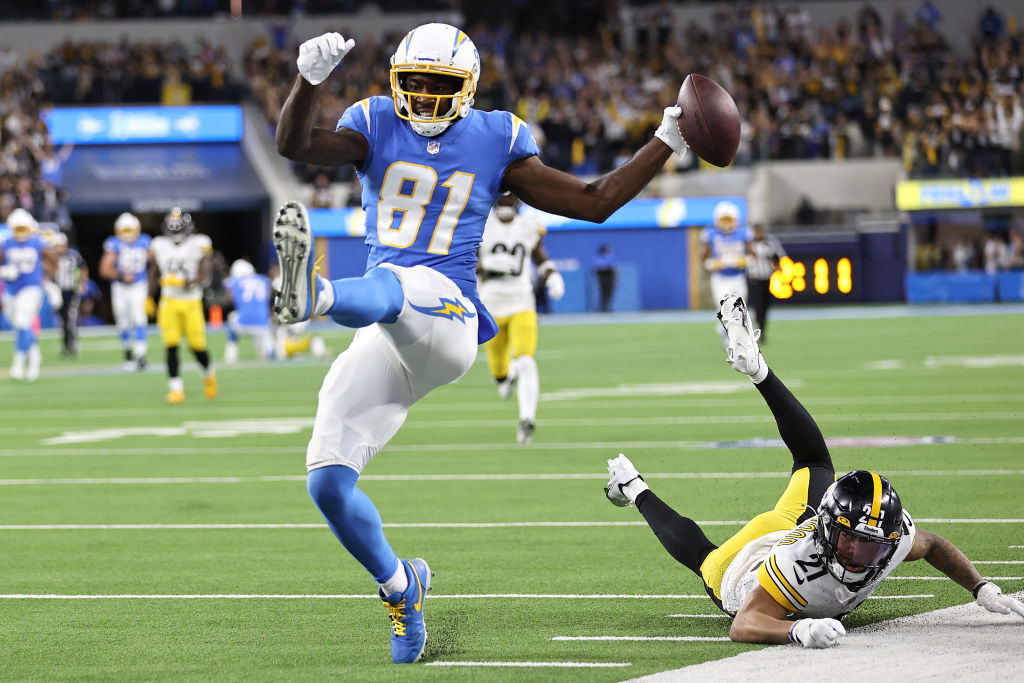 2/15
INGLEWOOD, CALIFORNIA – NOVEMBER 21: Mike Williams #81 of the Los Angeles Chargers breaks a tackle by Tre Norwood #21 of the Pittsburgh Steelers for a pass play touchdown during the fourth quarter of a game at SoFi Stadium on November 21, 2021 in Inglewood, California. (Photo by Sean M. Haffey/Getty Images)

This is the proverbial immovable object meeting an unstoppable force; the Chargers’ infamously bad luck late in games almost included a monumental fourth-quarter collapse and Pittsburgh is notoriously bad on the West Coast. Something had to give and the only surprise is that Los Angeles played as well as it did in a de facto road game. 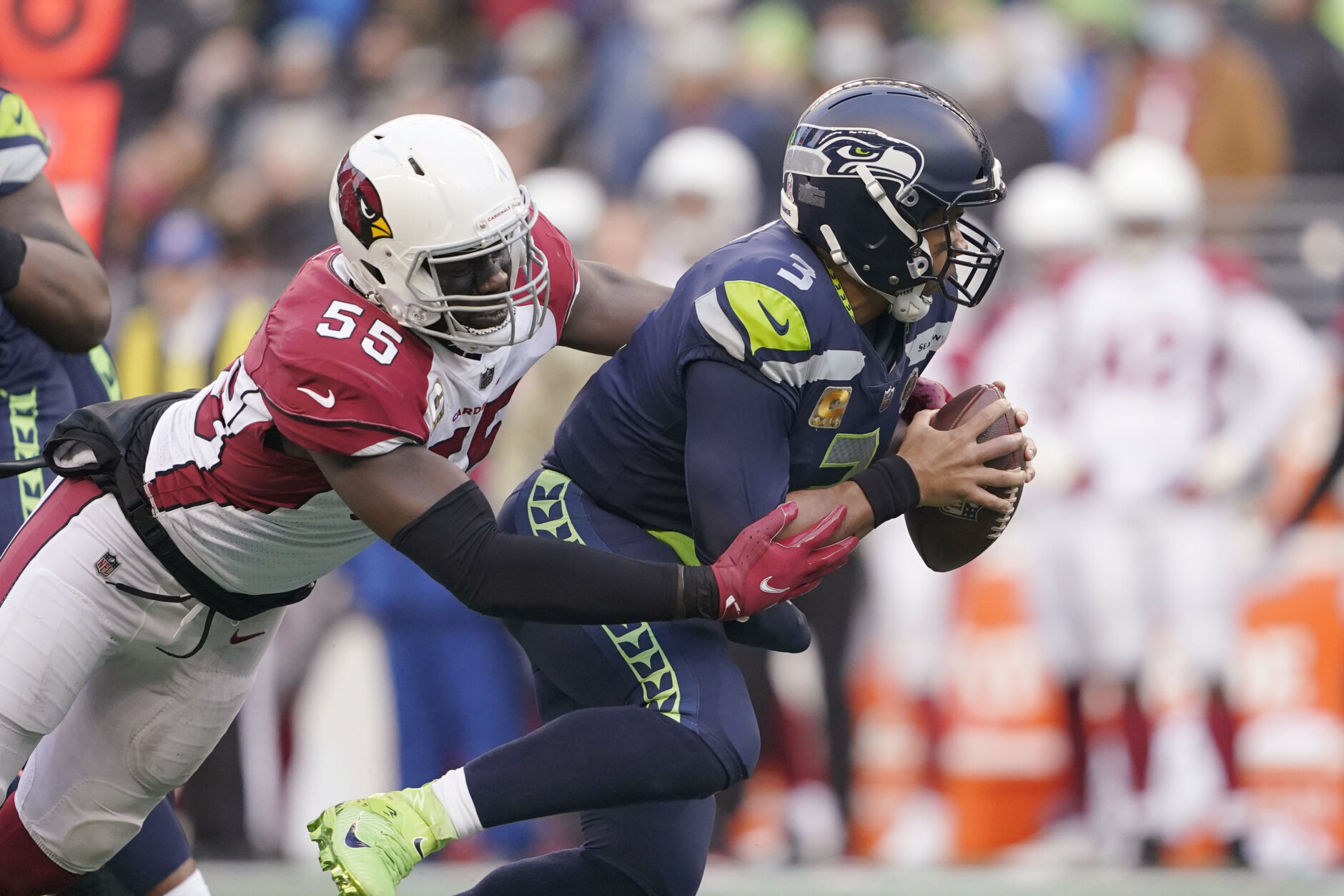 Despite the high urgency, Russell Wilson was outdueled by Colt McCoy(!!!) and kept out of the end zone for the second consecutive game. With 3-7 Seattle off to its worst 10-game start of the Pete Carroll era, a Monday night loss in Washington — where the Burgundy and Gold are notoriously inept — could spell the beginning of the end of that coach-QB combo.

Meanwhile, Arizona might just be for real after all. No Kyler Murray, no D-Hop and still beat a division rival on the road to improve to 6-0 on the road — all by double digits? I’m taking the Cards seriously from here on out. 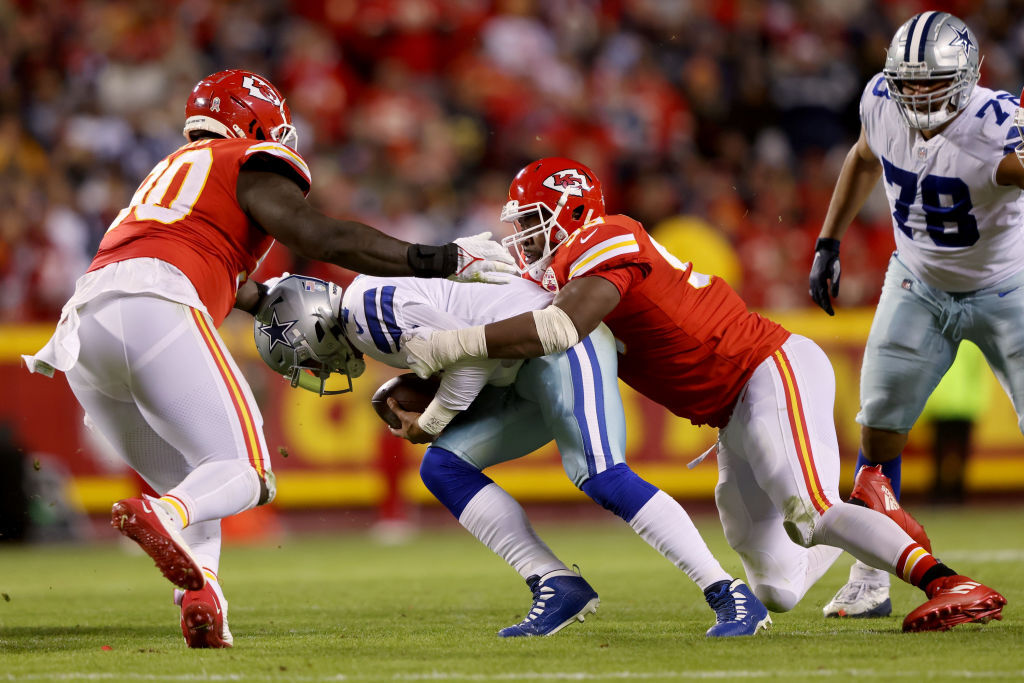 4/15
KANSAS CITY, MISSOURI – NOVEMBER 21: Chris Jones #95 and Jarran Reed #90 of the Kansas City Chiefs sack Dak Prescott #4 of the Dallas Cowboys during the fourth quarter of the game at Arrowhead Stadium on November 21, 2021 in Kansas City, Missouri. (Photo by Jamie Squire/Getty Images)

Dallas scored at least two touchdowns in every game this season — until running into that Kansas City defense. I haven’t seen this kind of defensive turnaround since the 2006 Indianapolis Colts — and we all remember how that team ended its season. 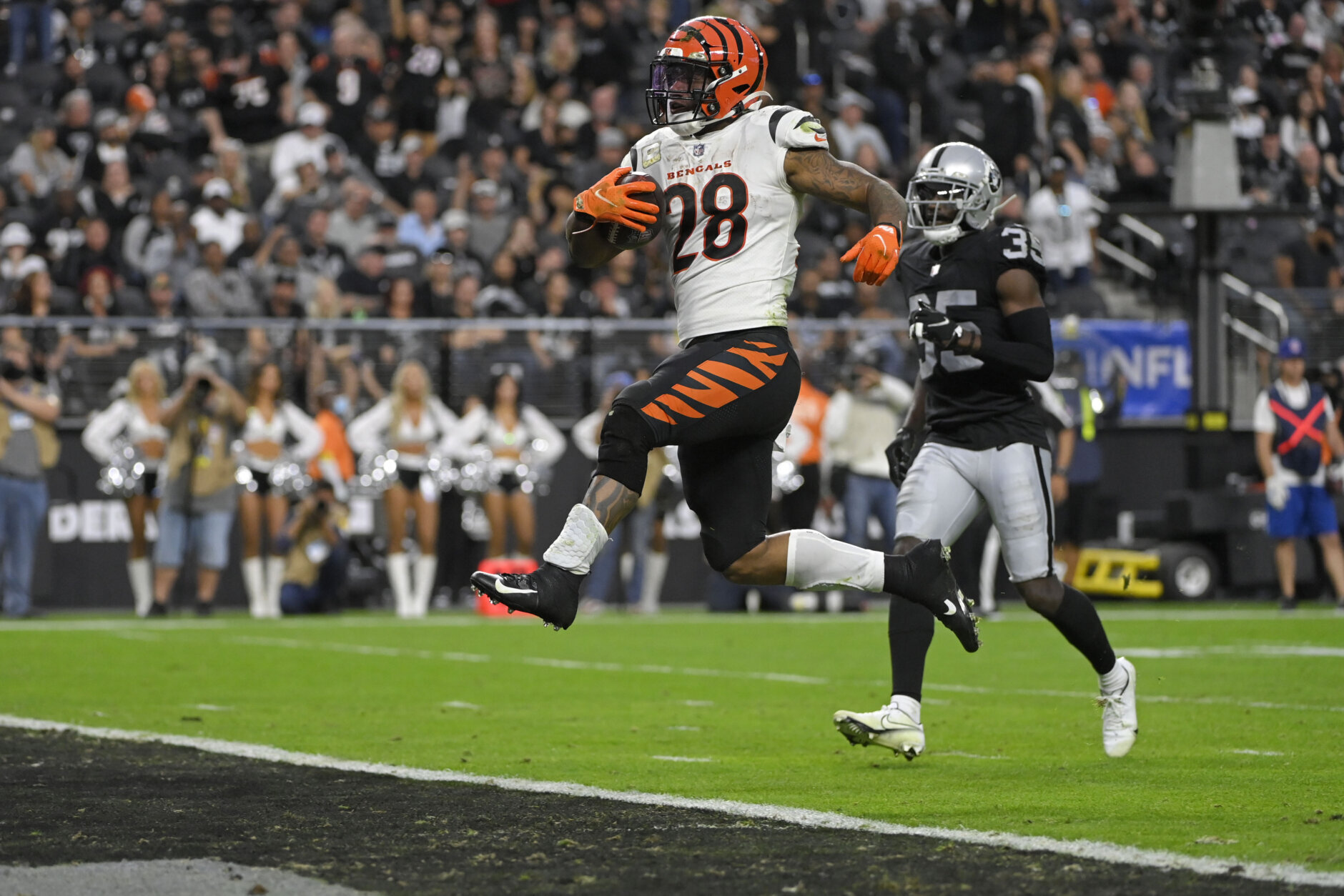 5/15
Cincinnati Bengals running back Joe Mixon (28) scores a touchdown against the Las Vegas Raiders during the second half of an NFL football game, Sunday, Nov. 21, 2021, in Las Vegas. (AP Photo/David Becker)

This is forever the Carson Palmer Bowl in my mind, but it was a running back that was the main attraction in Las Vegas — Joe Mixon has scored in seven straight games and looks like the key to Cincinnati staying relevant in the AFC playoff picture. 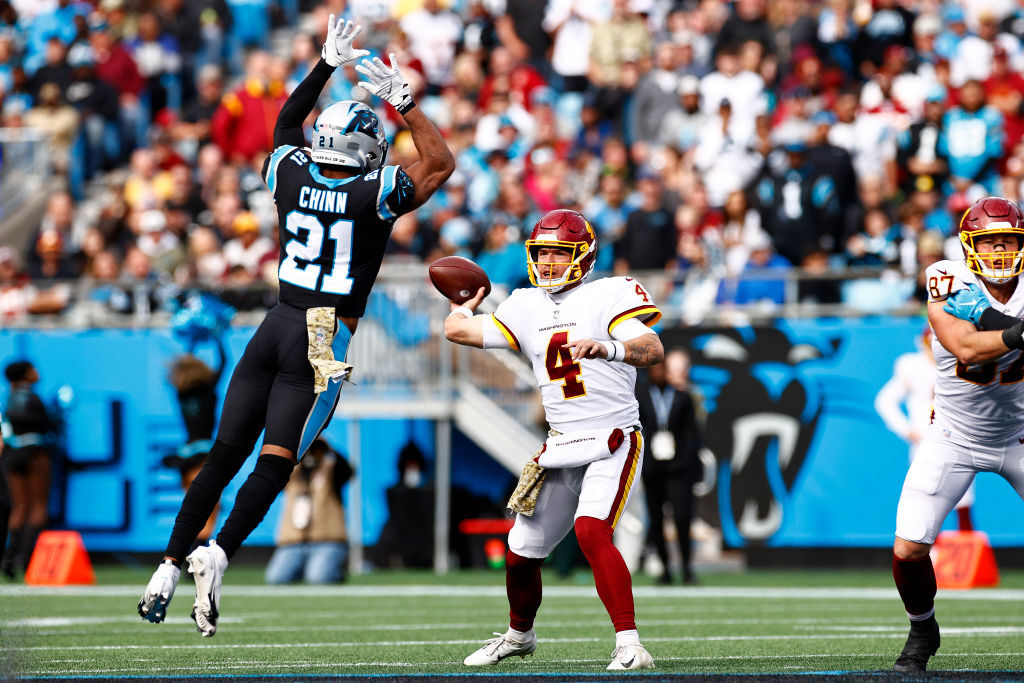 6/15
CHARLOTTE, NORTH CAROLINA – NOVEMBER 21: Taylor Heinicke #4 of the Washington Football Team throws a pass under pressure by Jeremy Chinn #21 of the Carolina Panthers in the second quarter of the game at Bank of America Stadium on November 21, 2021 in Charlotte, North Carolina. (Photo by Jared C. Tilton/Getty Images)

As much as it pains me to admit after my campaign for Cam Newton in Washington, he was denied a victory on his special day and outplayed by Taylor Heinicke in what was his best career game in successive weeks. However, I’m not at all upset to say Ron Rivera returning to Carolina to win with former Panthers castoffs like Heinicke and Joey Slye is the kind of storybook tale that ends with Washington in the playoffs. Having the tiebreaker advantage over Carolina might just make that a reality. 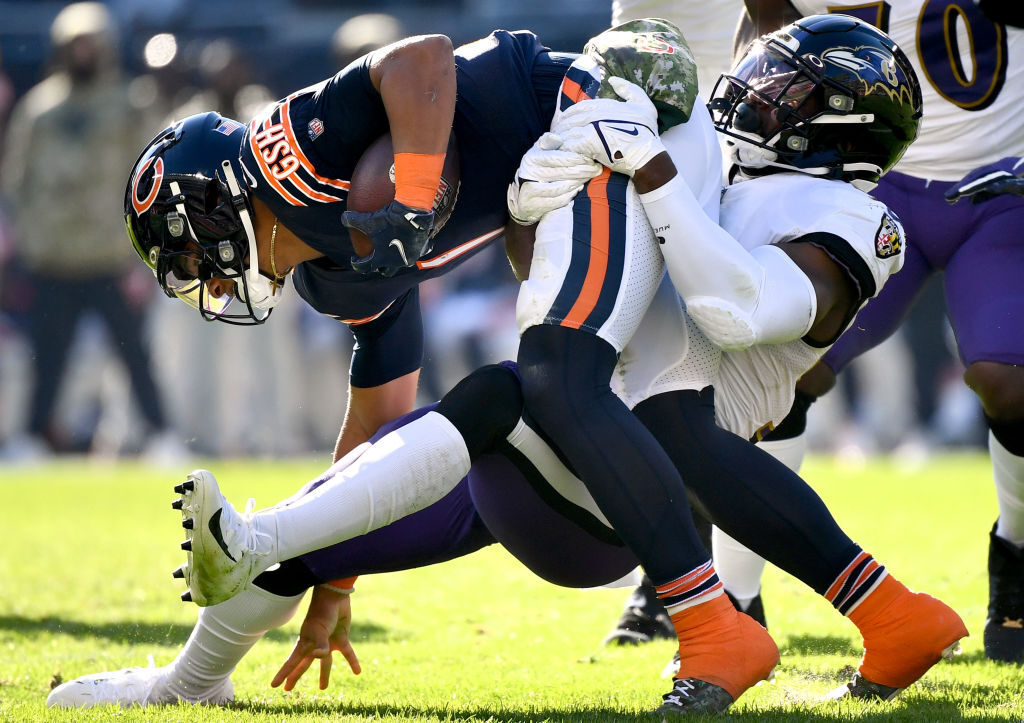 7/15
CHICAGO, ILLINOIS – NOVEMBER 21: Justin Fields #1 of the Chicago Bears is tackled by Tyus Bowser #54 of the Baltimore Ravens during the second quarter at Soldier Field on November 21, 2021 in Chicago, Illinois. (Photo by Jamie Sabau/Getty Images)

I don’t know if I should be impressed that Baltimore earned its first-ever win in Chicago even without Lamar Jackson or if Matt Nagy should be immediately fired for losing a home game to Tyler Huntley and damn near getting Justin Fields killed.

Philly’s first home win of the season came courtesy of this ankle-breaking, soul-snatching, “hide ya kids, hide ya wife” juke that should have ended with either a fight or a retirement announcement. Dayum. 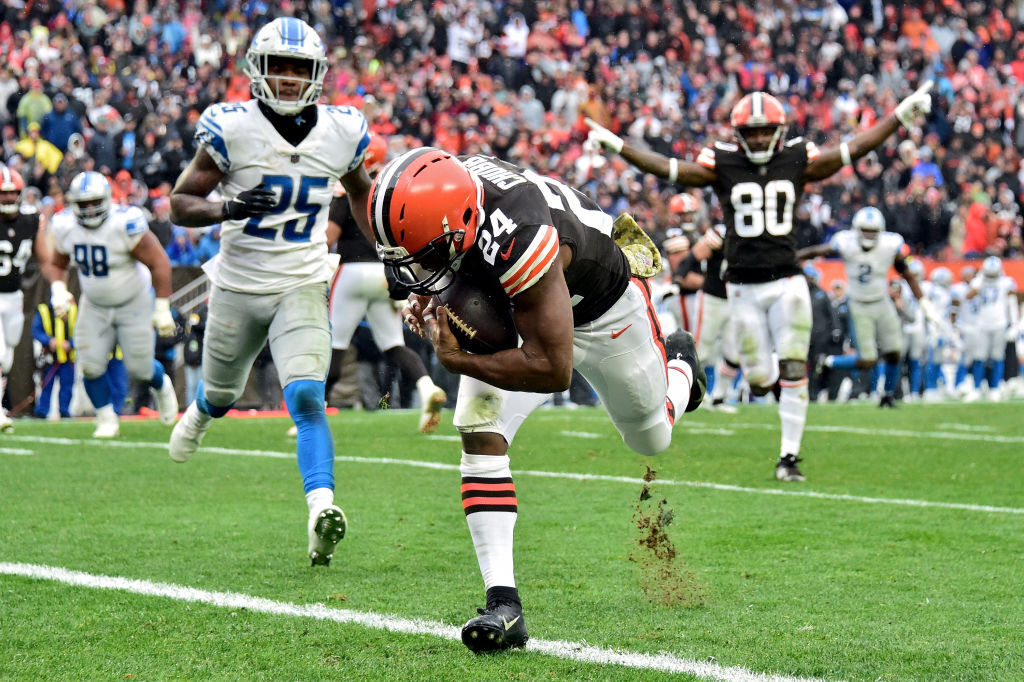 9/15
CLEVELAND, OHIO – NOVEMBER 21: Nick Chubb #24 of the Cleveland Browns runs into the end zone for a touchdown reception against the Detroit Lions in the second quarter at FirstEnergy Stadium on November 21, 2021 in Cleveland, Ohio. (Photo by Jason Miller/Getty Images)

This game was every bit as ugly as you’d expect from a battle between the only two franchises to go 0-16 in a season. 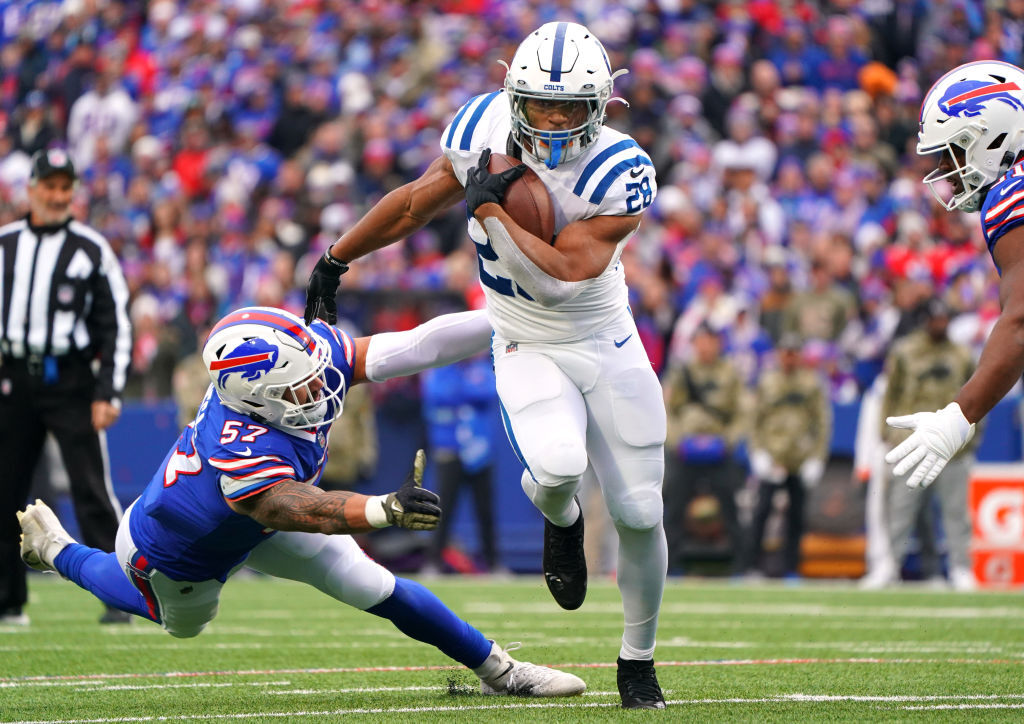 10/15
ORCHARD PARK, NEW YORK – NOVEMBER 21: Jonathan Taylor #28 of the Indianapolis Colts avoids a tackle by A.J. Epenesa #57 of the Buffalo Bills during the first quarter at Highmark Stadium on November 21, 2021 in Orchard Park, New York. (Photo by Kevin Hoffman/Getty Images)

Jonathan Taylor is quietly having one of the best and incredibly consistent seasons in NFL history, shredding the No. 1 defense in the league for the first five touchdown game by an Indianapolis Colt. Indy might finally be living up to its high preseason expectations. 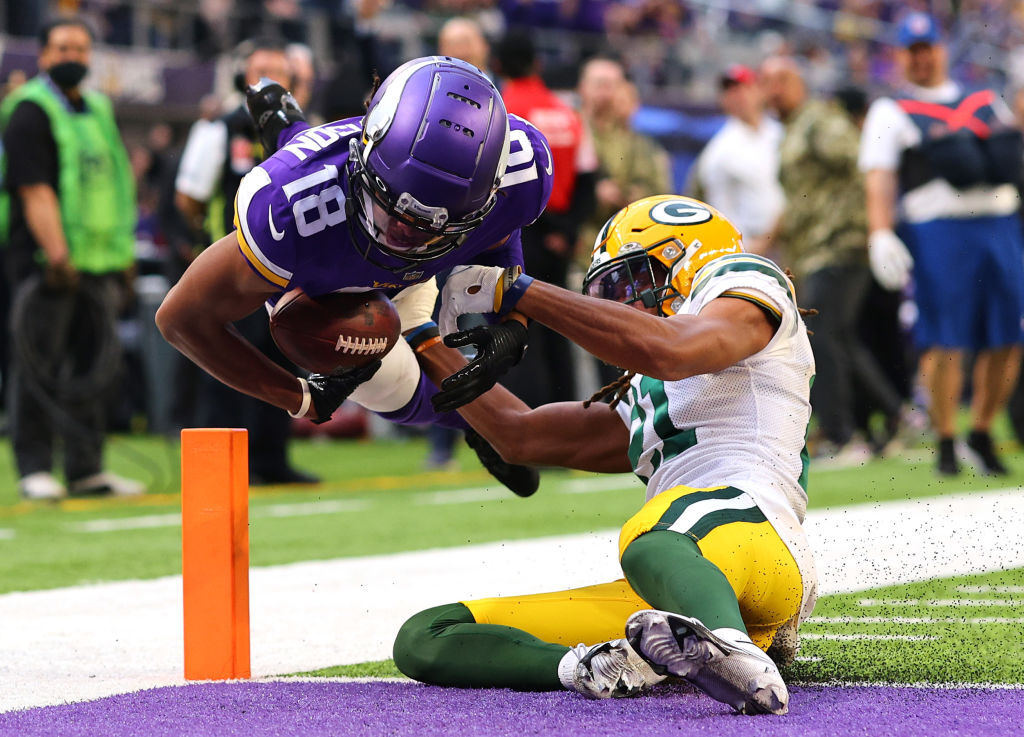 11/15
MINNEAPOLIS, MINNESOTA – NOVEMBER 21: Justin Jefferson #18 of the Minnesota Vikings dives into the end zone for a touchdown as Eric Stokes #21 of the Green Bay Packers tries to tackle in the fourth quarter at U.S. Bank Stadium on November 21, 2021 in Minneapolis, Minnesota. (Photo by Adam Bettcher/Getty Images)

Minnesota might be better than their record implies; the Vikings’ five losses are by a total of 18 points and Kirk Cousins is tied with Aaron Rodgers for the most games this season with multiple touchdown passes without an interception (7). The NFC North might be a two-horse race after all.

Forget for a moment that San Francisco has rushed for over 150 yards in their last two games and won both. Your swag has to be on 100 to try and set up the league’s highest paid left tackle for a goal line touchdown catch. Kyle Shanahan is on one. 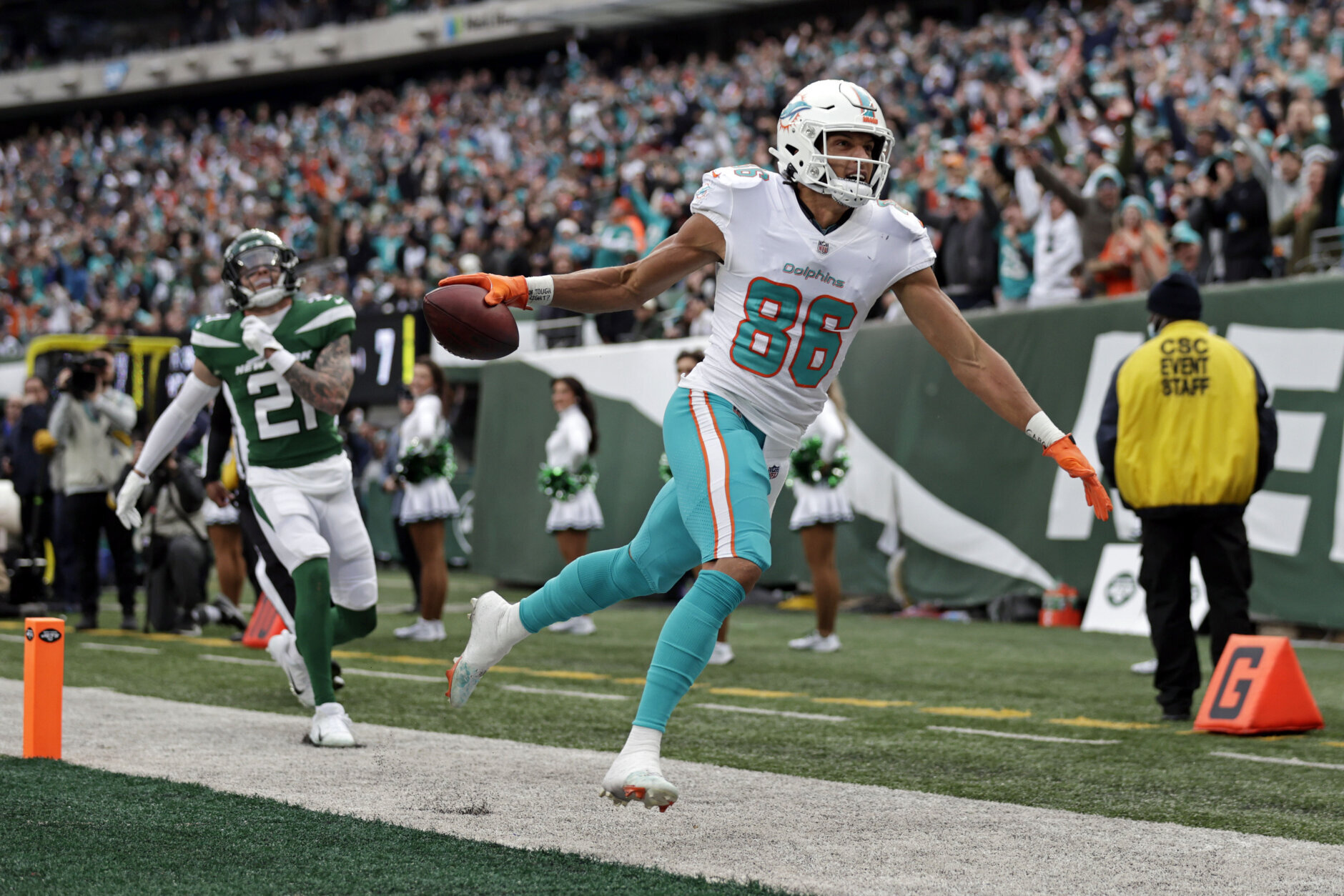 Is it me, or is New York’s offense at its best when literally anyone not named Zach Wilson starts?

This may also be just me but Miami’s third straight win feels like it’s setting the Fins up for a compelling December stretch. 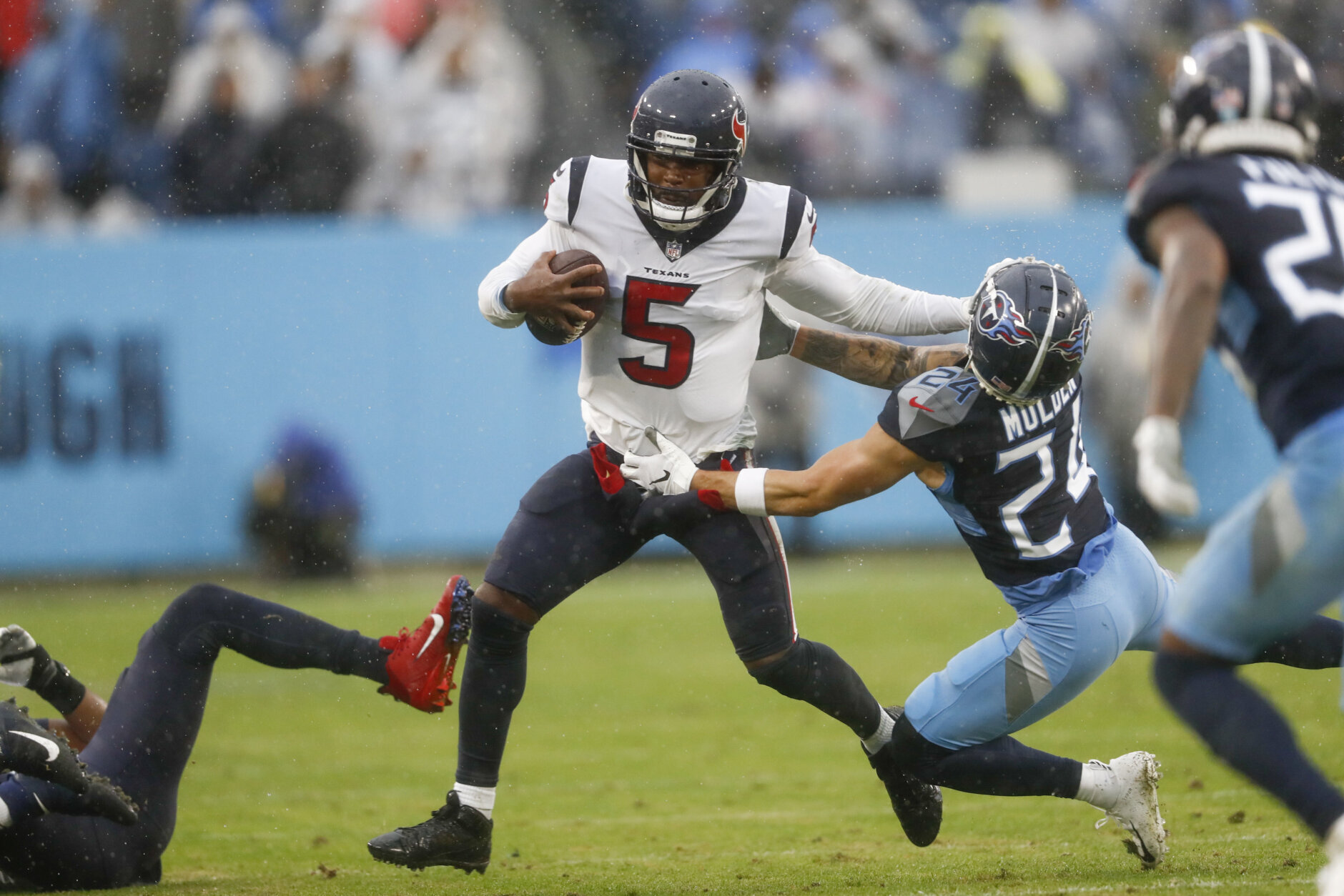 Memo to Tennessee: Beating the good teams on your schedule with great proficiency doesn’t mean anything if you’re going to lay a turd against the bad teams. Losing at home to a team that hadn’t scored a touchdown in its last four road games, let alone win, is inexcusable for a team with Super Bowl aspirations. 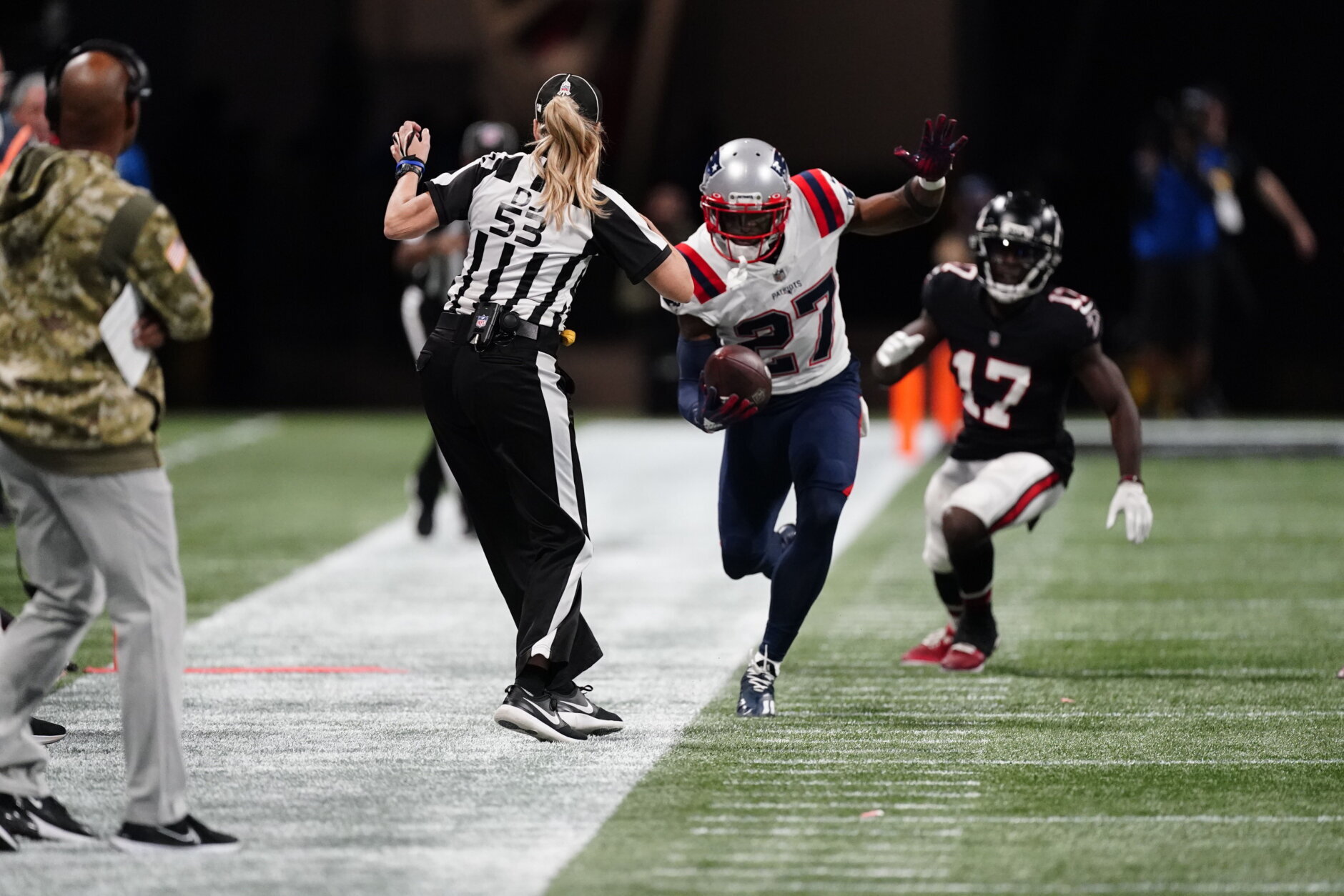 15/15
New England Patriots cornerback J.C. Jackson (27) runs after his interception against the Atlanta Falcons during the second half of an NFL football game, Thursday, Nov. 18, 2021, in Atlanta. (AP Photo/John Bazemore)

As if the infamous Super Bowl loss after a 28-3 lead weren’t misery enough, New England came into Atlanta and handed the Falcons their first home shutout loss in 33 years. It looks like the Patriots defense won’t let this team fade into irrelevance just yet. Damn it.

Steelers’ DB Haden out vs. Bengals; Ebron heads to IR