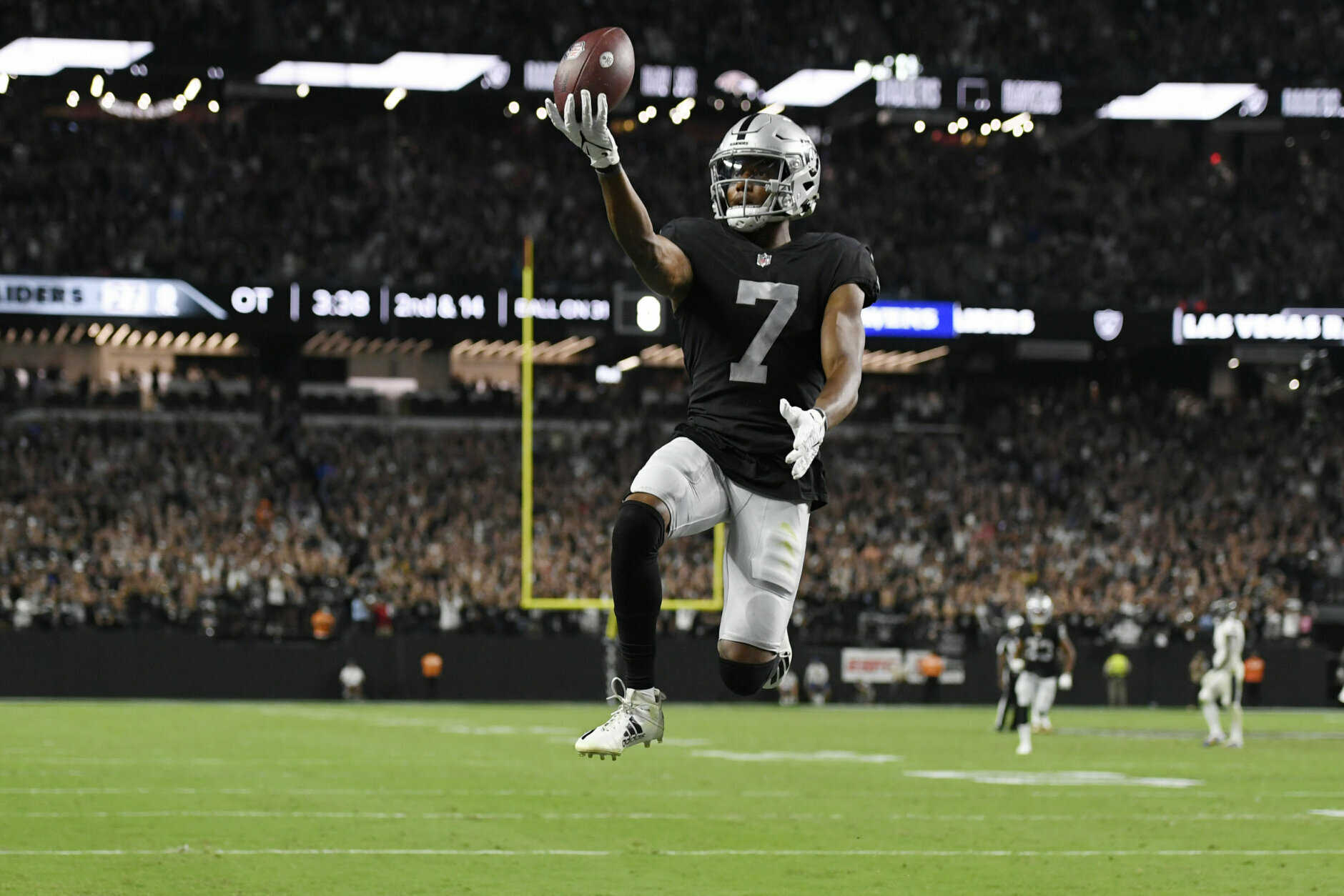 Derek Carr had 24 game-winning drives in the 4th quarter or OT. John Harbaugh’s Ravens were 81-0 when leading by 14 or more points. Something had to give in a memorable Monday nighter in Las Vegas — and it was Baltimore’s dominance in season openers. 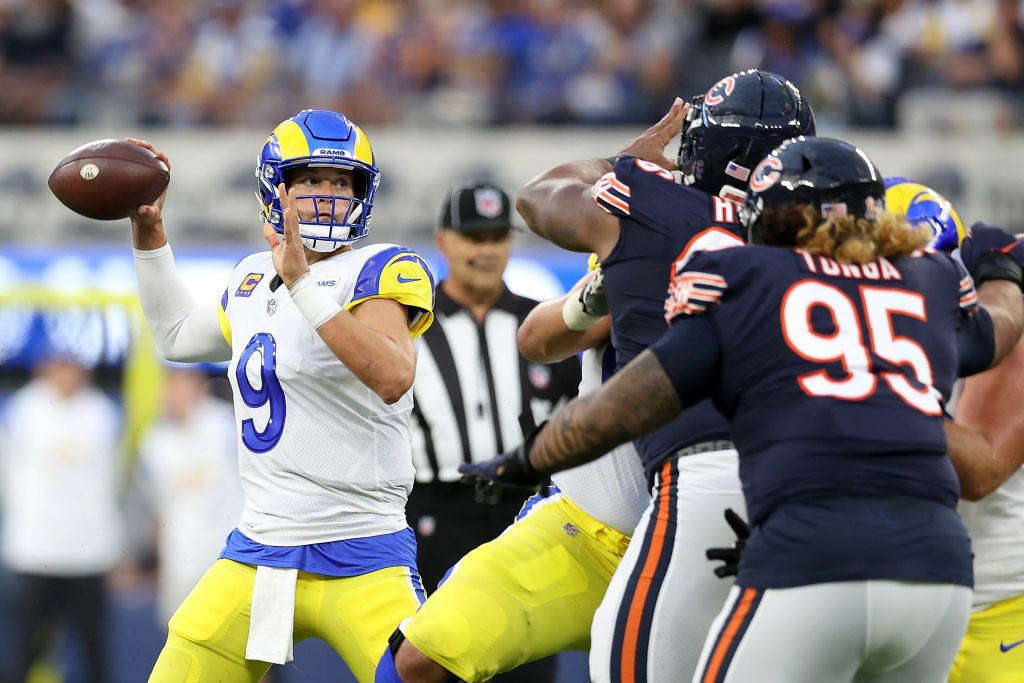 2/16
INGLEWOOD, CALIFORNIA – SEPTEMBER 12: Matthew Stafford #9 of the Los Angeles Rams looks to pass during the first half against the Chicago Bears at SoFi Stadium on September 12, 2021 in Inglewood, California. (Photo by Ronald Martinez/Getty Images)

If only for one night, all is rosy for Matthew Stafford in his new digs — the longtime (or long-suffering, depending who you ask) Detroit Lion became the first player in 59 years to throw a pair of 50-yard touchdowns in his team debut and looked right at home in a Sean McVay offense that had just as many 50-yard TDs in 2020. This move might work out after all.

Also, I’m curious to see how long Matt Nagy stubbornly holds on to this belief that Andy Dalton gives him the best chance to win. Chances are if it’s much longer, he won’t be there long enough to find out what Justin Fields has. 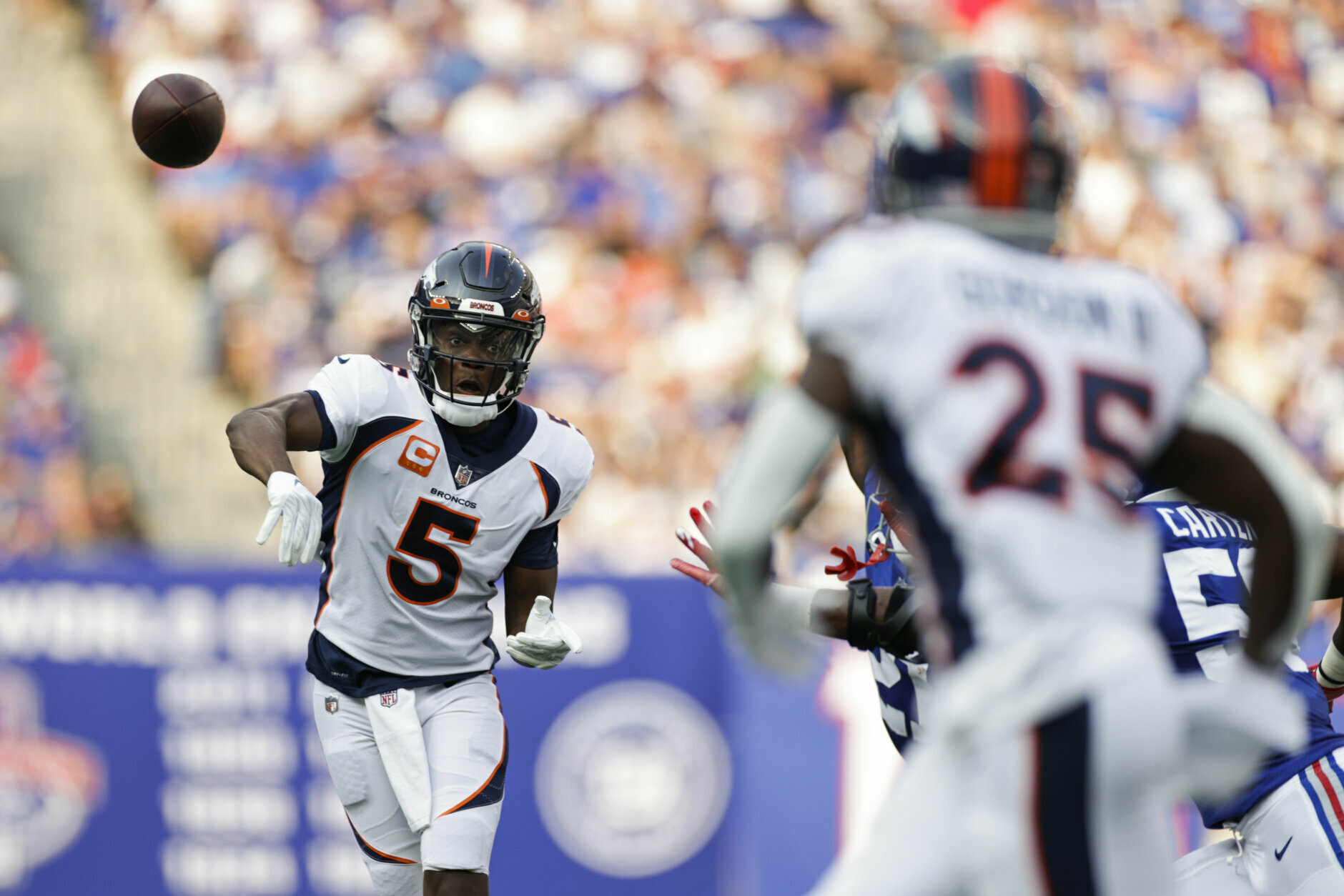 Look, I know this wasn’t exactly the 2007 Giants defense … but I don’t get why people sleep so hard on Teddy Bridgewater. Carolina might regret giving away a QB better than the one they got.

And Washington fans — don’t laugh too hard at this. However bad Saquon Barkley and Daniel Jones look against anyone else, the sight of Burgundy and Gold brings out the best in them. 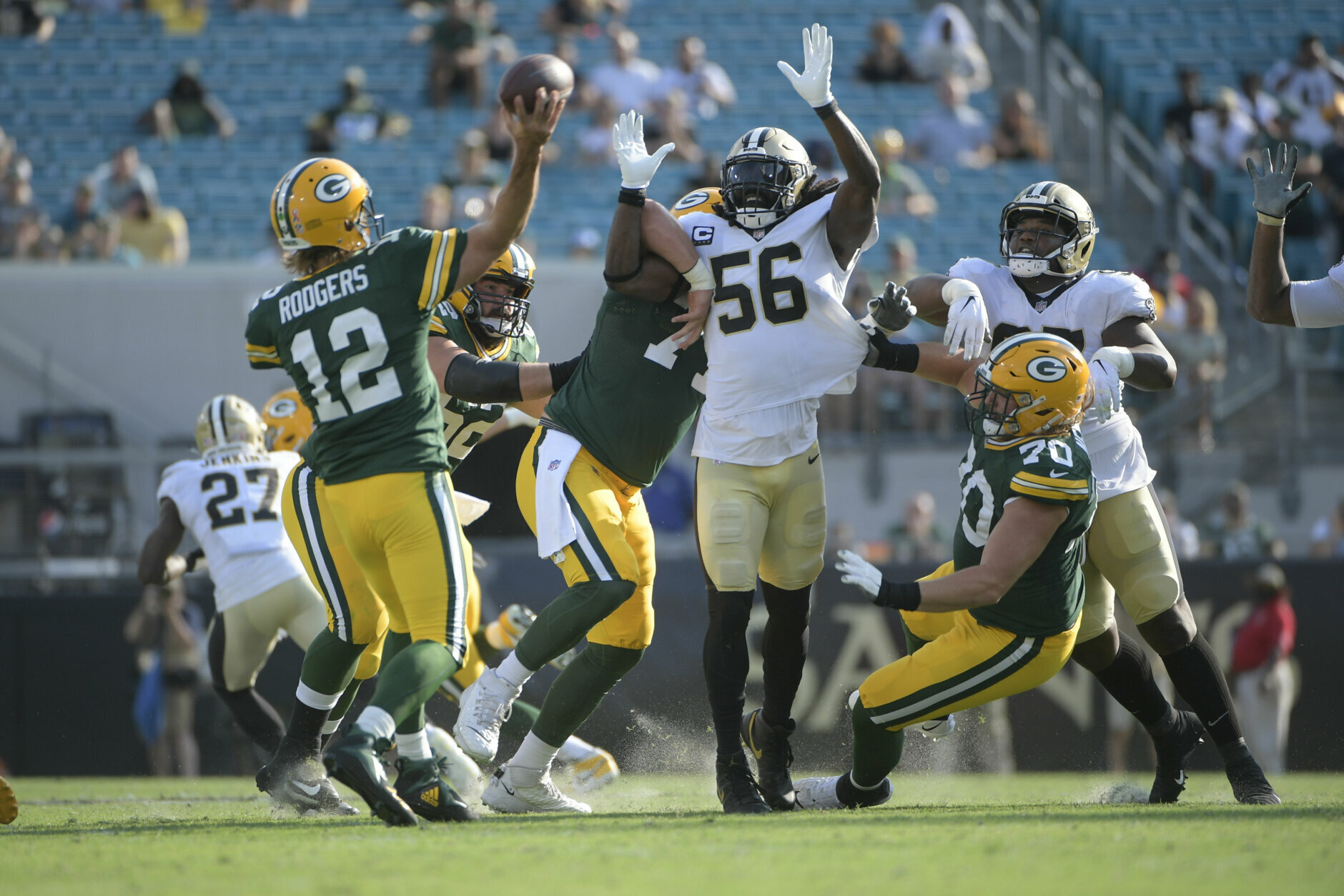 Jameis Winston did more than just represent New Orleans to the fullest in Jacksonville — dude threw five touchdowns on only 20 throws in his Saints debut, while the NO defense said no to Aaron Rodgers in the rudest way possible, notching as many takeaways as points allowed and dealing A-Rod his worst loss as a pro (no, seriously … the reigning MVP played worse than he would have if he weren’t trying at all). This may just be the most stunning result of Week 1 and probably not the last “kick in the you know where” for the Packers this year. 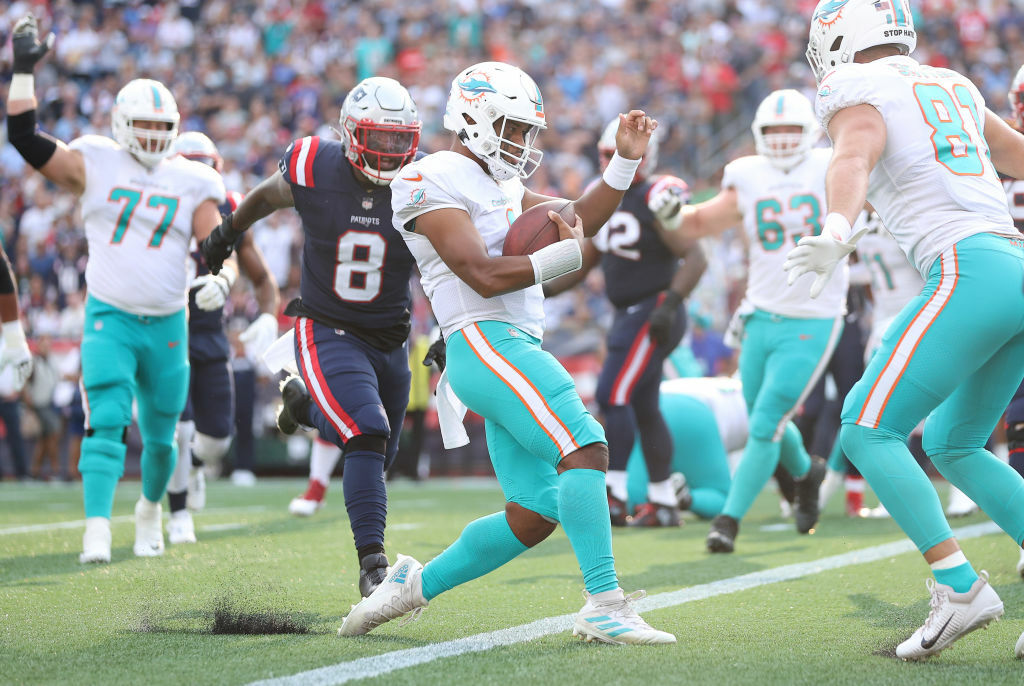 I came here prepared to go off about how telling it is that Tua Tagovailoa wasn’t voted a Dolphins team captain and how vastly he was outplayed by fellow Alabama alum Mac Jones in his Pats debut. But the reality is, Miami is 3-2 against New England since Brian Flores took over, besting his mentor Bill Belichick in Foxborough twice. If the Fins really do find a way to get better QB play — be it an improved Tua, Deshaun Watson or some other option — the AFC East is going to be really interesting for years to come. 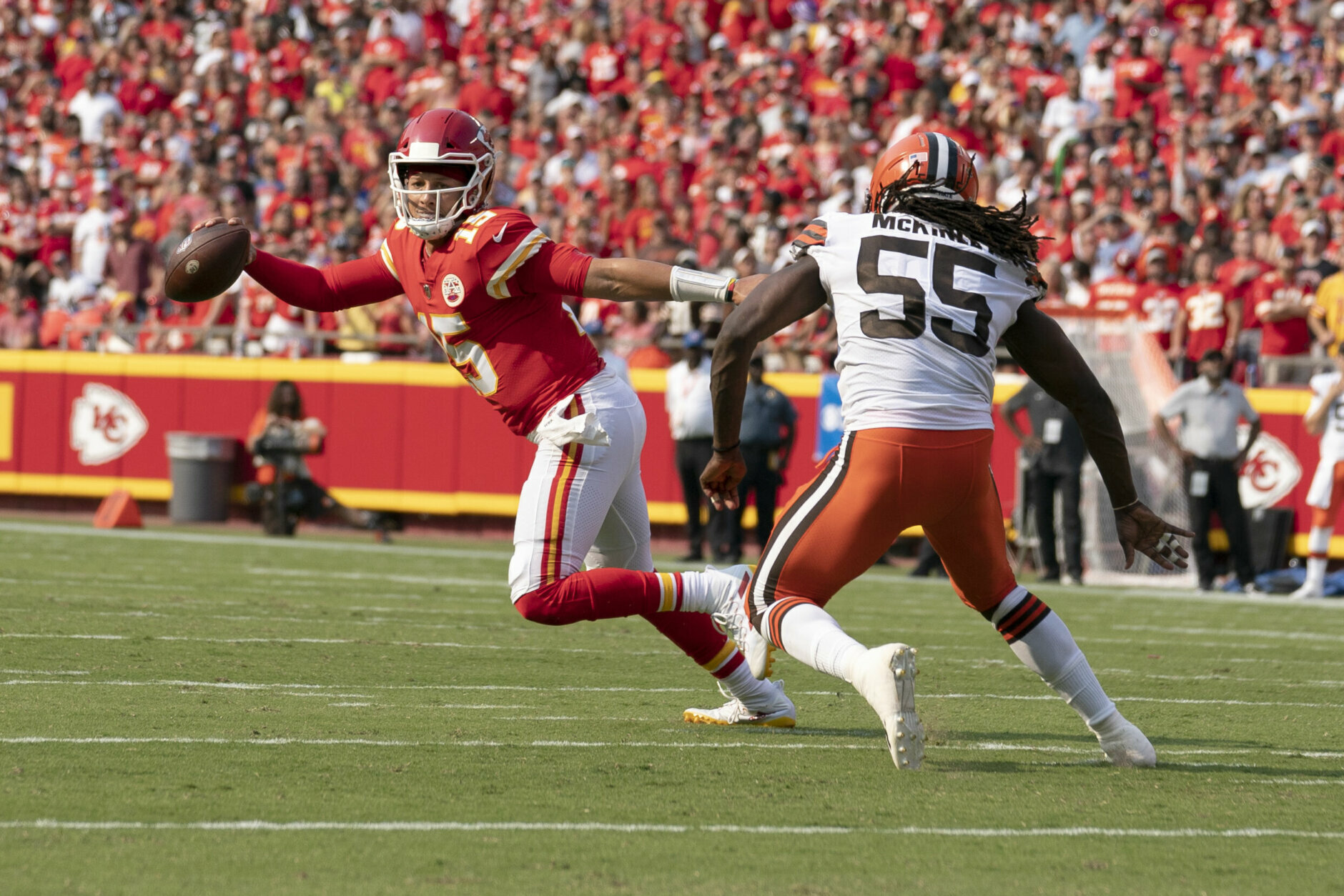 Once again, Patrick Mahomes leads the Chiefs to a KC masterpiece comeback, carving up Cleveland’s D for 23 points in the second half and scoring all four offensive touchdowns. There truly isn’t a better show in the NFL. 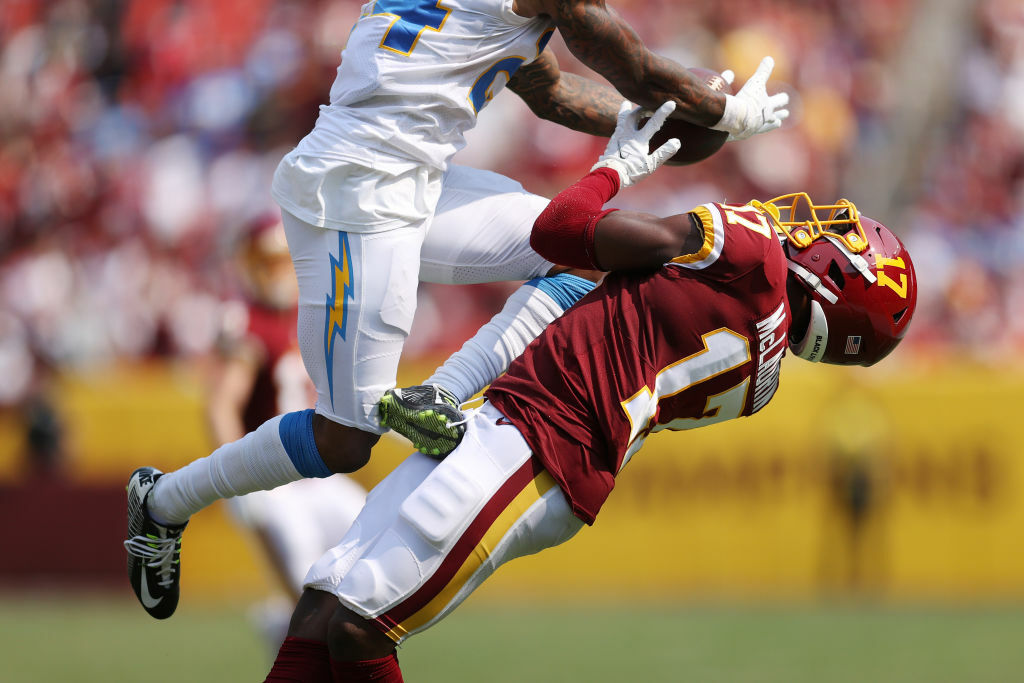 7/16
LANDOVER, MARYLAND – SEPTEMBER 12: Terry McLaurin #17 of the Washington Football Team makes a catch against the Los Angeles Chargers during the fourth quarter at FedExField on September 12, 2021 in Landover, Maryland. (Photo by Patrick Smith/Getty Images)

First of all, look at that picture! Terry McLaurin actually caught that! I’ve seen the video three times and still don’t believe it!

But like I said in last week’s NFL preview: Things rarely turn out as well for the Burgundy and Gold as they look on paper.

Ryan Fitzpatrick didn’t even make it to halftime of his Washington debut and didn’t look particularly good for an underachieving offense even before his hip injury. The “vaunted” defense was carved up early and often, giving up a mindboggling 14 of 19 third down conversion rate. I know it’s only the first week of the season but a home loss to the Giants on a short turnaround could spell the beginning of a lost season in D.C. 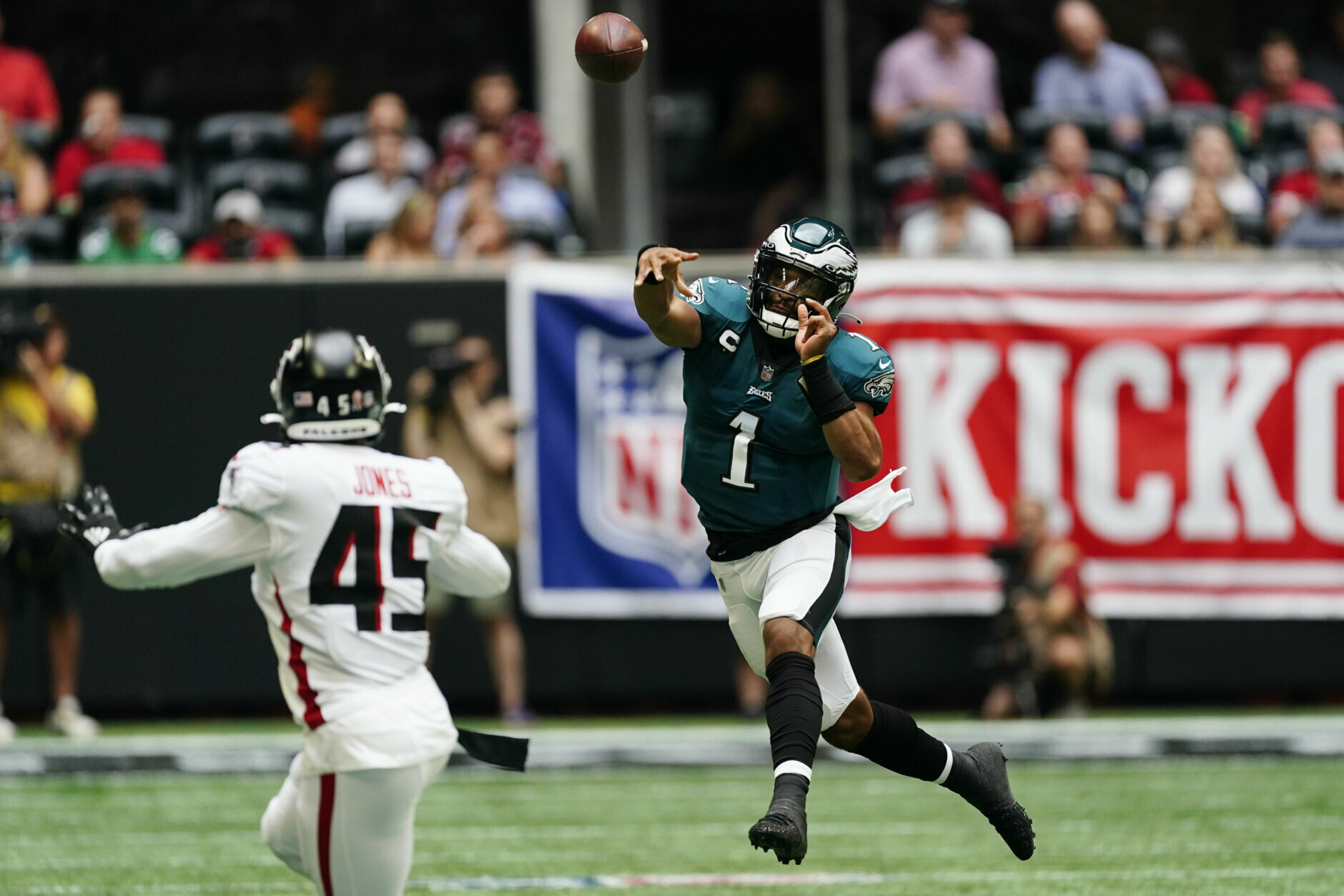 Don’t look now but Philly was the only NFC East team to win in Week 1 and surprisingly have the early edge in the division. Jalen Hurts looked legit in his Week 1 debut and the Eagles defense looked the best it has probably since the Super Bowl season four years ago. If they even stay close to the 49ers next week, I’ll be impressed. 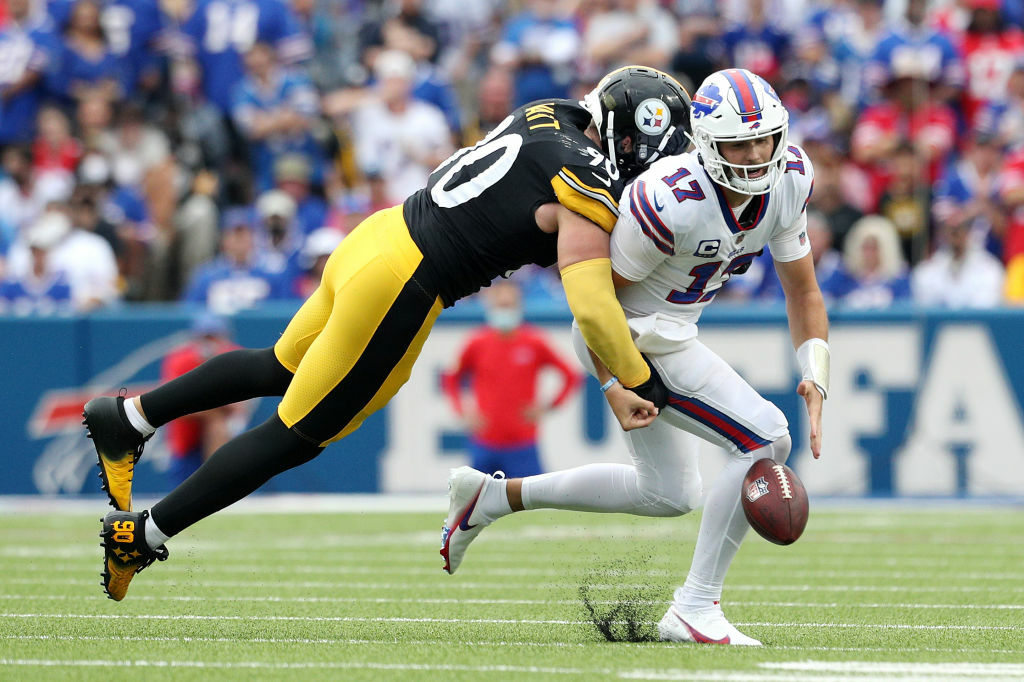 The Pittsburgh Steelers have been around for a really long time (88 years, to be exact). And this was their first time erasing a double-digit halftime deficit to win in Week 1. It’s rare that a defense leads such a comeback but T.J. Watt played like a boss after getting paid like a boss, leading the Steeler D to a stellar road win few thought possible. With Baltimore riddled with injuries, Pittsburgh’s division reign may not be over just yet. 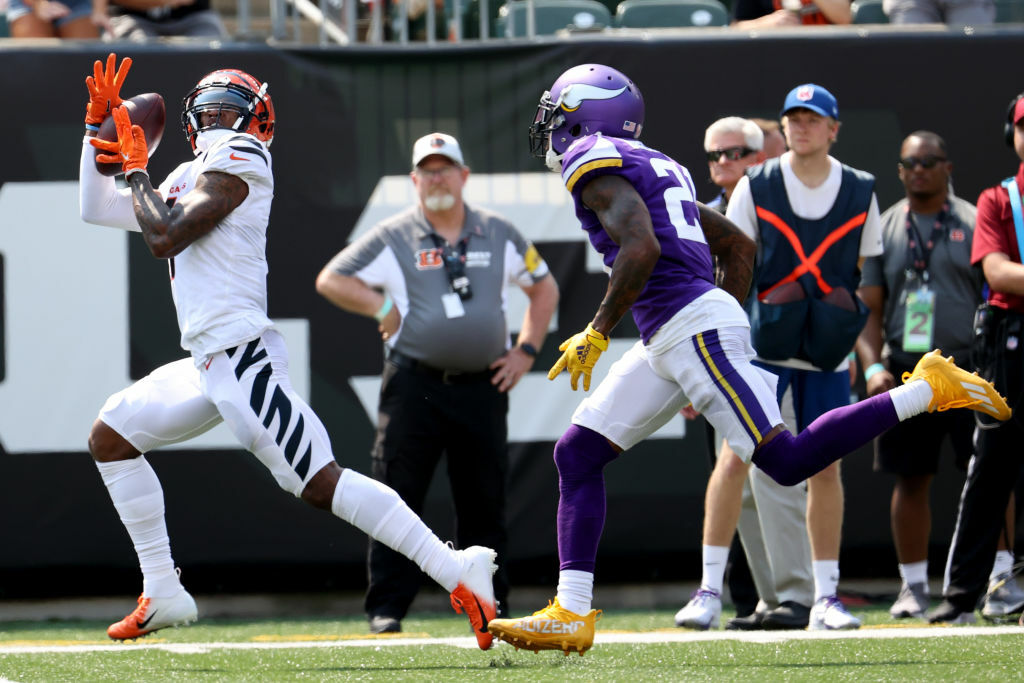 10/16
CINCINNATI, OHIO – SEPTEMBER 12: Ja’Marr Chase #1 of the Cincinnati Bengals scores after a 50-yard touchdown reception from Joe Burrow #9 during the second quarter against the Minnesota Vikings at Paul Brown Stadium on September 12, 2021 in Cincinnati, Ohio. (Photo by Andy Lyons/Getty Images)

How bad a loss was this for Minnesota, you ask? A rookie who couldn’t catch a pro ball in the preseason scored a long touchdown to help Cincinnati to its first September victory under Zac Taylor and first Week 1 home win since 2007. Based on the way the Cardinals played Sunday, the Vikings look destined for a season-altering 0-2 start. 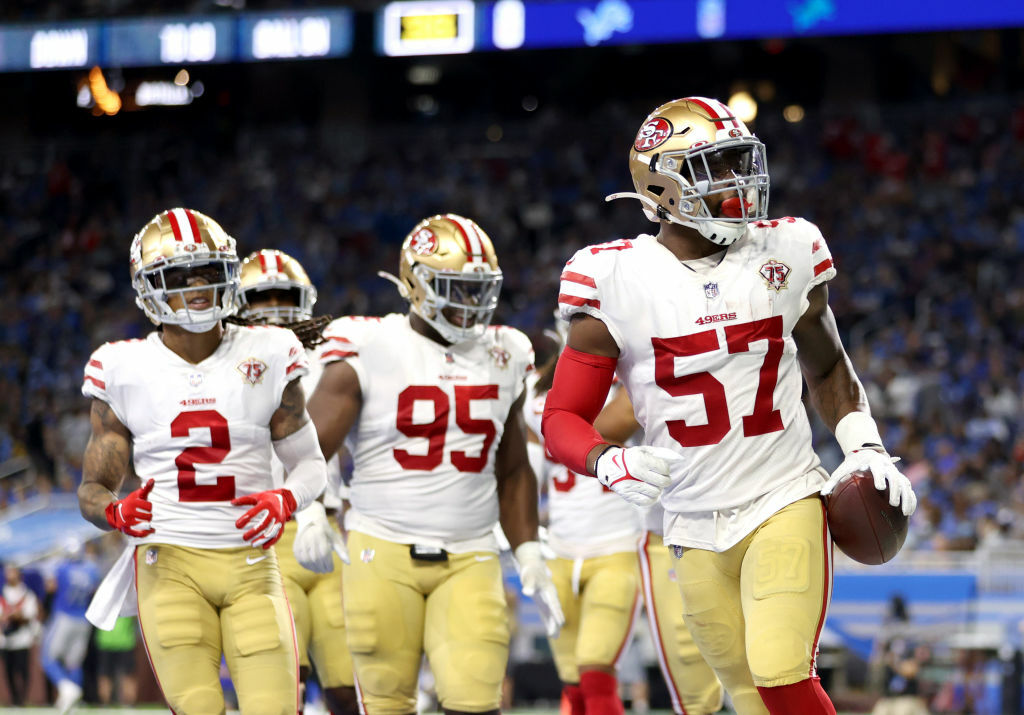 11/16
DETROIT, MICHIGAN – SEPTEMBER 12: Dre Greenlaw #57 of the San Francisco 49ers celebrates with teammates after a 39-yard interception return from a pass from Jared Goff #16 of the Detroit Lions during the second quarter at Ford Field on September 12, 2021 in Detroit, Michigan. (Photo by Gregory Shamus/Getty Images)

San Fran is back and Detroit still stinks, no matter who’s being overrated at QB. Nothing to see here, folks. 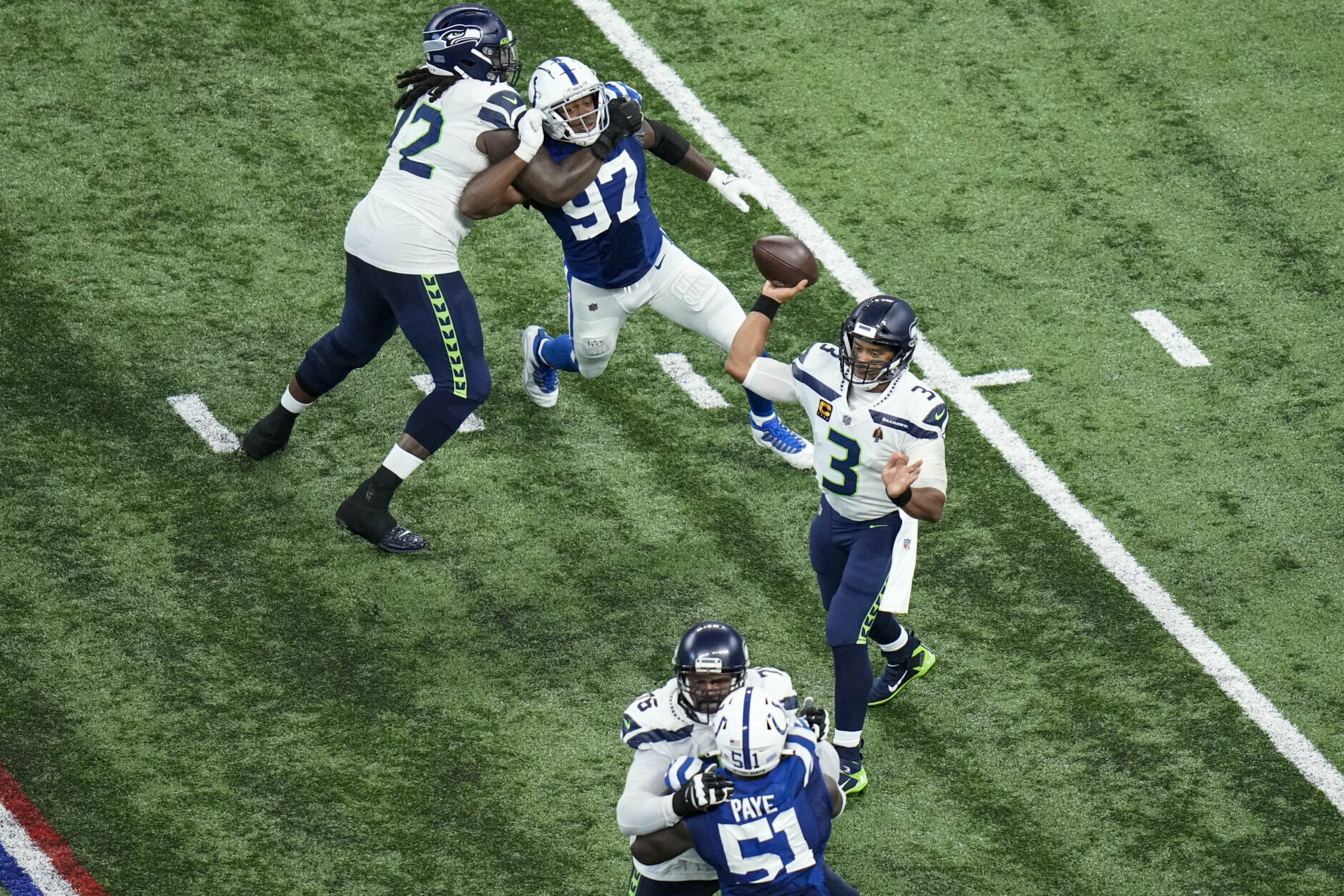 12/16
Seattle Seahawks quarterback Russell Wilson (3) throws against the Indianapolis Colts during the second half of an NFL football game in Indianapolis, Sunday, Sept. 12, 2021. (AP Photo/AJ Mast)

Russell Wilson torched a Colts defense widely considered to be among the league’s best, and made our own Dave Preston look silly for insisting a West Coast team playing a 1 o’clock kick out east is a disadvantage — Seattle has now won 12 of their last 13 such games. The Seahawks look every bit as good as I thought — and Indy looked as overrated as I thought. 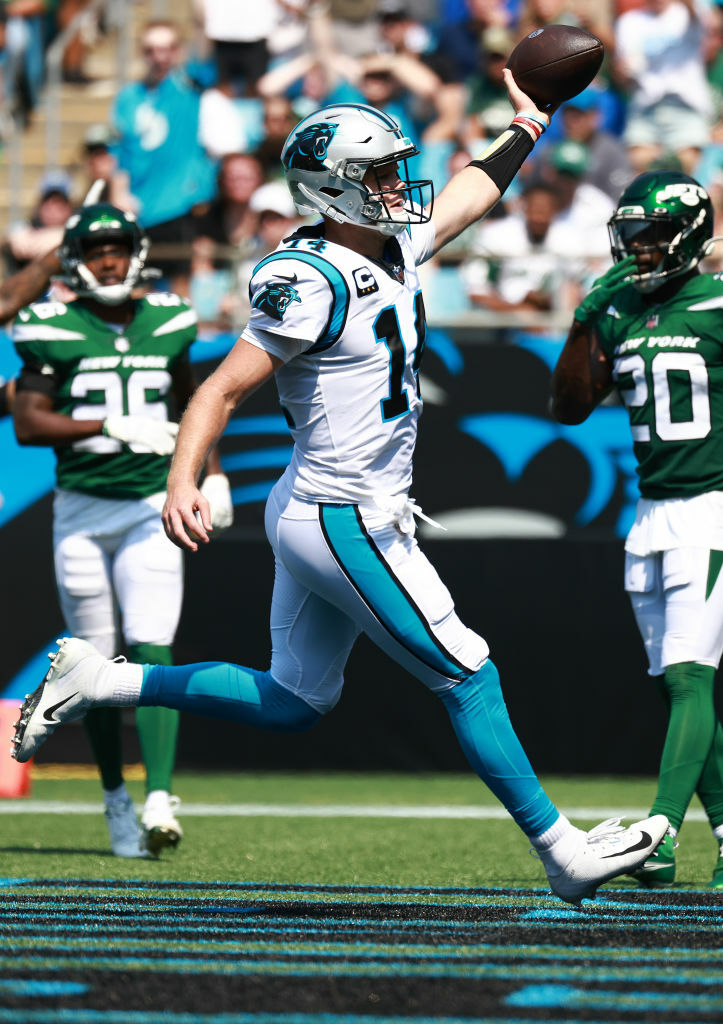 13/16
CHARLOTTE, NORTH CAROLINA – SEPTEMBER 12: Sam Darnold #14 of the Carolina Panthers runs for a five-yard touchdown during the second quarter against the New York Jets at Bank of America Stadium on September 12, 2021 in Charlotte, North Carolina. (Photo by Grant Halverson/Getty Images)

A focused Sam Darnold looked good in his Carolina debut against his former team, while his replacement, Zach Wilson, had a miserable first half before showing why the Jets made him the second overall pick.

But the real history made on the field wasn’t by any player — Maia Chaka is the first Black woman to officiate a NFL game and I’m so here for the increased diversity we’re seeing on NFL fields and sidelines. 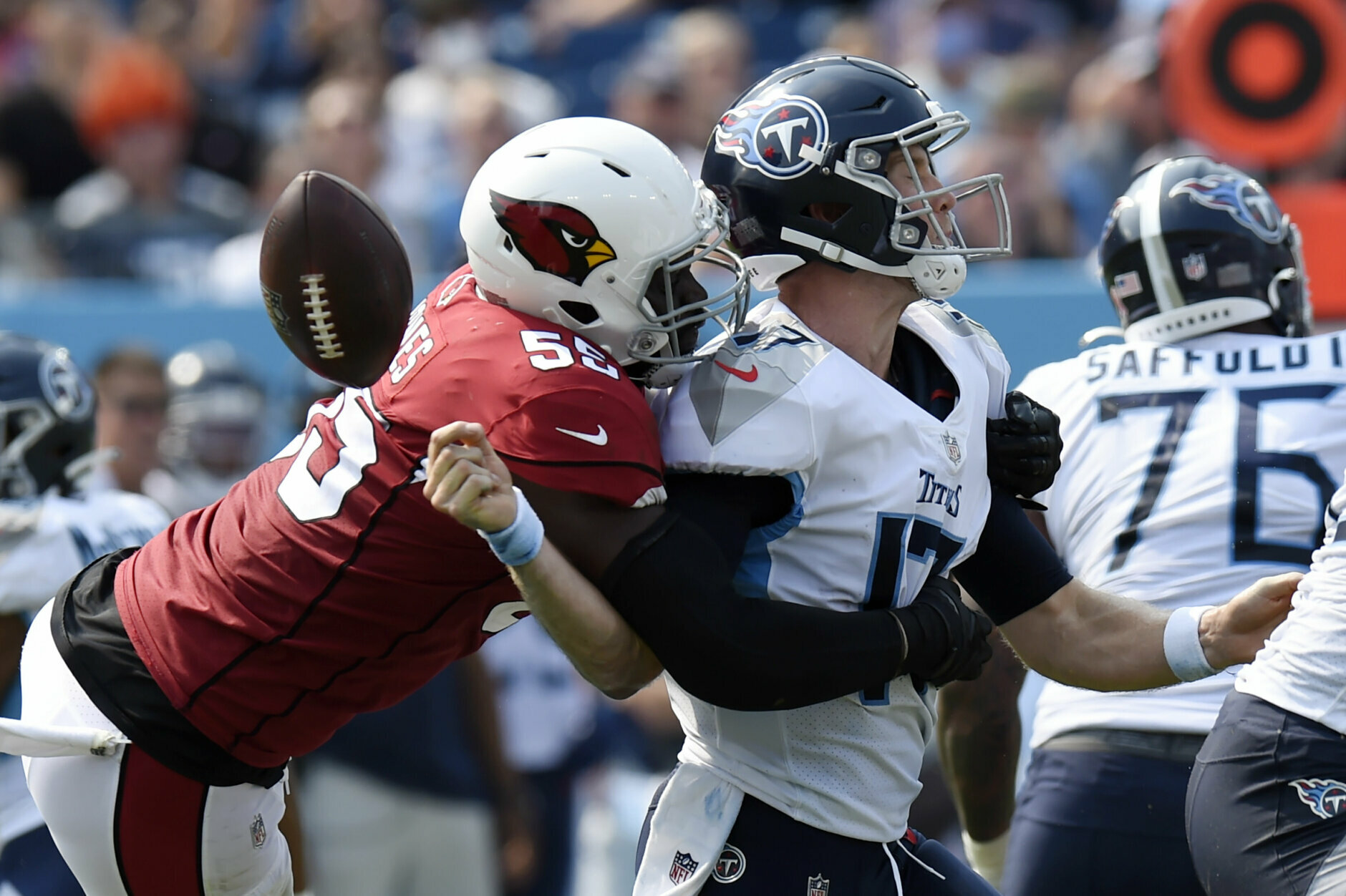 I sure didn’t see this coming — Arizona dominated Tennessee in their own building, shutting down Derrick Henry, getting five sacks from Chandler Jones and scoring five Kyler Murray touchdowns. The Titans defense might hold them back from reaching my lofty expectations. 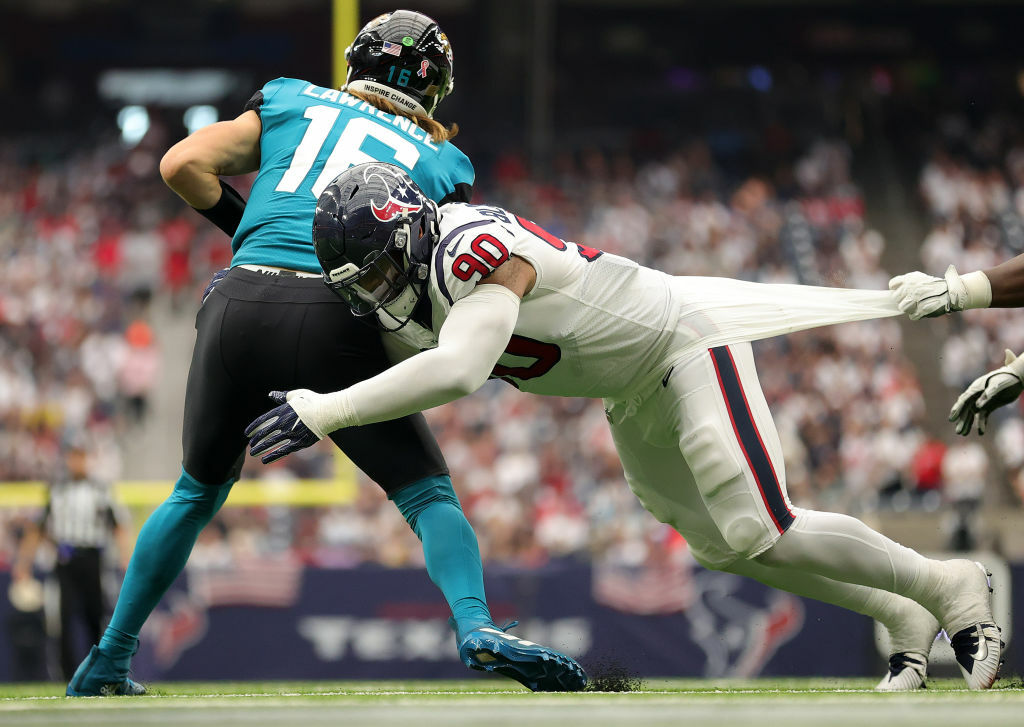 15/16
HOUSTON, TEXAS – SEPTEMBER 12: Ross Blacklock #90 of the Houston Texans tackles Trevor Lawrence #16 of the Jacksonville Jaguars during the second quarter at NRG Stadium on September 12, 2021 in Houston, Texas. (Photo by Carmen Mandato/Getty Images)

Look, I get that one game does not a career make … but if Trevor Lawrence is indeed a generational talent, he shouldn’t throw three picks and get thoroughly outplayed by a journeyman QB against a bad Houston defense, no matter how bad the Jags’ supporting cast is. This could be a much longer season than expected in Jacksonville. 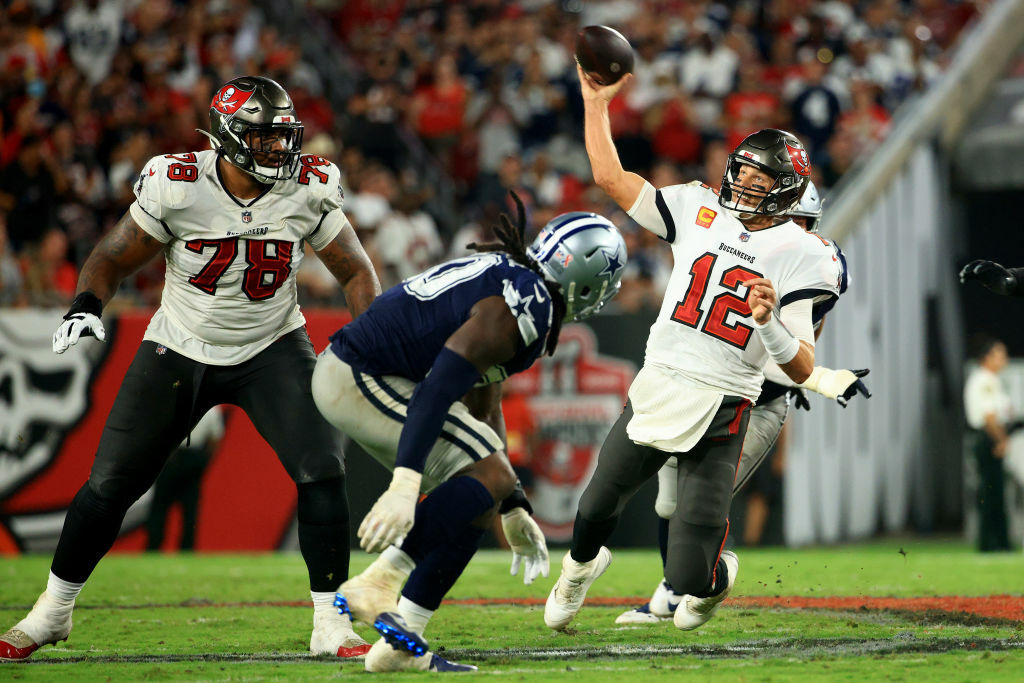 16/16
TAMPA, FLORIDA – SEPTEMBER 09: Tom Brady #12 of the Tampa Bay Buccaneers passes against the Dallas Cowboys during the third quarter at Raymond James Stadium on September 09, 2021 in Tampa, Florida. (Photo by Mike Ehrmann/Getty Images)

I mean, what can we say about Tom Brady that hasn’t already been said for decades? He just had his 100th 300-yard game in what was his 300th career start, he joined Vinny Testaverde as the only starting QBs, age-44 or older, to win a game in NFL history and Tom Terrific connected with his homey Rob Gronkowski for the 86th time, surprassing Steve Young and Jerry Rice for the third-most regular season touchdown hook ups in NFL history.

But neither team even pretended to run the ball in this one, as Brady and Dak’s comeback combined for a rare pass-heavy game that was Dak Prescott’s first loss when a 7+ point underdog. Even in defeat, Dallas looked much improved from 2020. 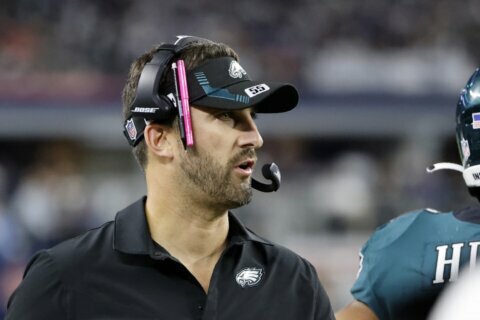 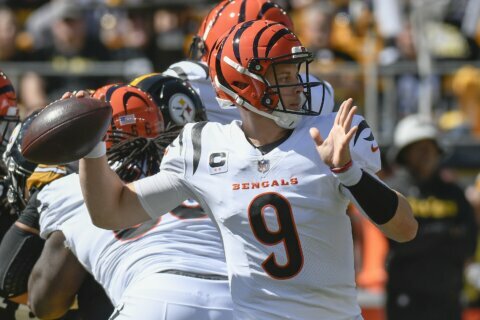