No practice makes near perfect, bad beats for bettors, a delicious lasagna pun and the Catch of the Year highlight the NFL Week 10 Recap. 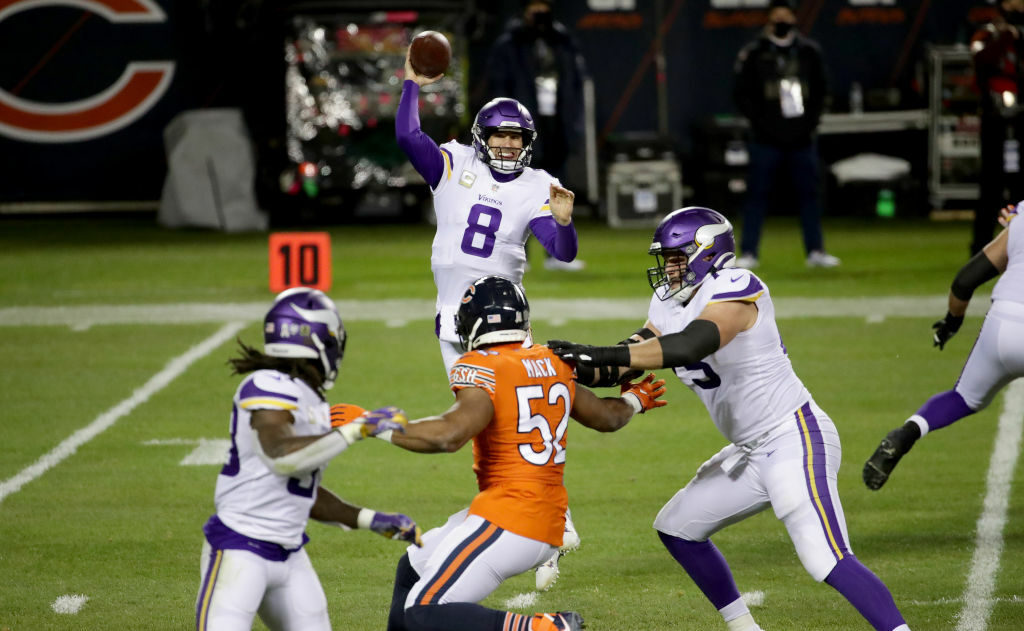 1/14
CHICAGO, ILLINOIS – NOVEMBER 16: Kirk Cousins #8 of the Minnesota Vikings throws a pass during the game against the Chicago Bears at Soldier Field on November 16, 2020 in Chicago, Illinois. (Photo by Jonathan Daniel/Getty Images)

It took him 10 tries but Kirk Cousins finally won a game on a Monday night!

The longest MNF losing streak in NFL history is over, and Minnesota’s season is reborn thanks to three straight wins heading into a stretch of three straight home games against teams with losing records. Incredibly, it looks like the Vikings can sound the feasting horn and make a postseason march despite their 1-5 start.

Conversely, Chicago’s fraudulent 5-1 start is a distant memory. Nobody wants to see Nick Foles carted off the field at the end of a lost game, but it seems like the only way Matt Nagy will do what is obvious to everyone but him: start Mitchell Trubisky and try to breathe some life into this bearskin rug you call an offense. 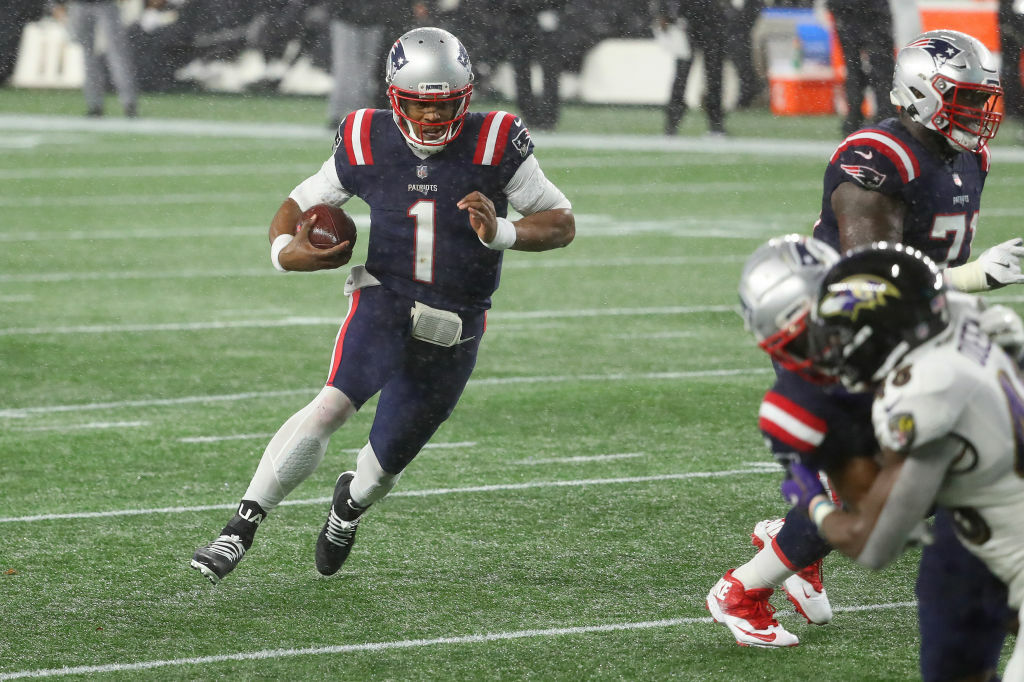 2/14
FOXBOROUGH, MASSACHUSETTS – NOVEMBER 15: Cam Newton #1 of the New England Patriots scores a touchdown against the Baltimore Ravens during the second half at Gillette Stadium on November 15, 2020 in Foxborough, Massachusetts. (Photo by Maddie Meyer/Getty Images)

Apparently, John Harbaugh was right to be leery of the Patriots. In a torrential downpour and without Calais Campbell, Baltimore’s defense got trucked by Cam Newton and the Pats rushing attack, while the Ravens offense was again punchless. The Ravens’ playoff rematch against Tennessee is now less about avenging last year’s postseason loss and more about ensuring there’s even a playoff scenario this year. 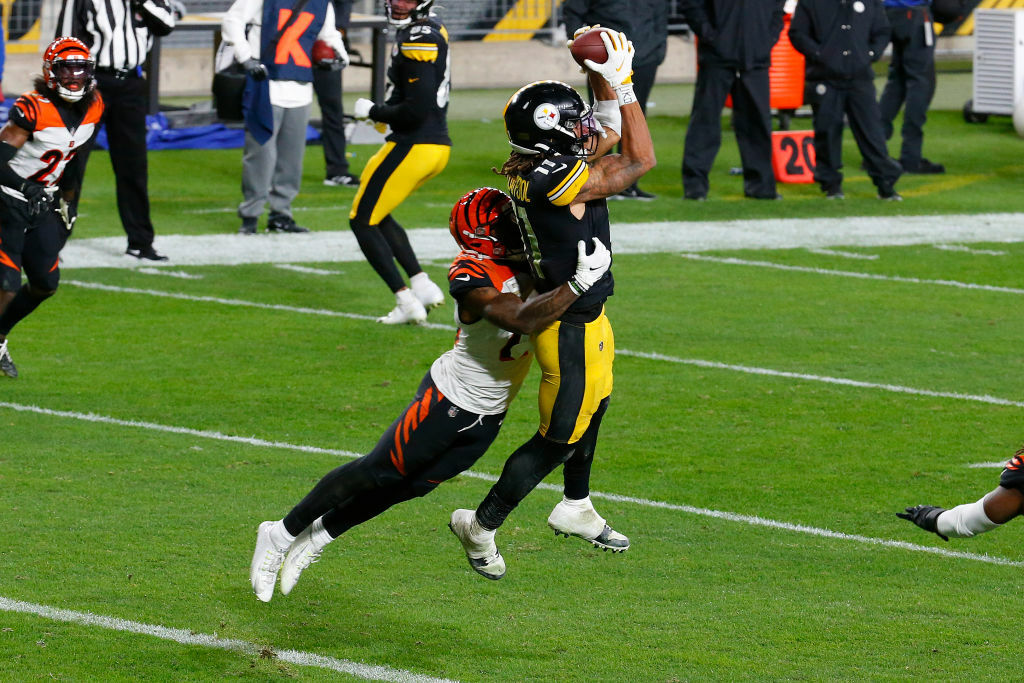 3/14
PITTSBURGH, PENNSYLVANIA – NOVEMBER 15: Chase Claypool #11 of the Pittsburgh Steelers catches an 11-yard touchdown against the Cincinnati Bengals during their NFL game at Heinz Field on November 15, 2020 in Pittsburgh, Pennsylvania. (Photo by Justin K. Aller/Getty Images)

Man, Ben Roethlisberger threw for 333 yards and four TDs without practicing all week. Just imagine what he’s going to do to Washington in three weeks with full preparation. 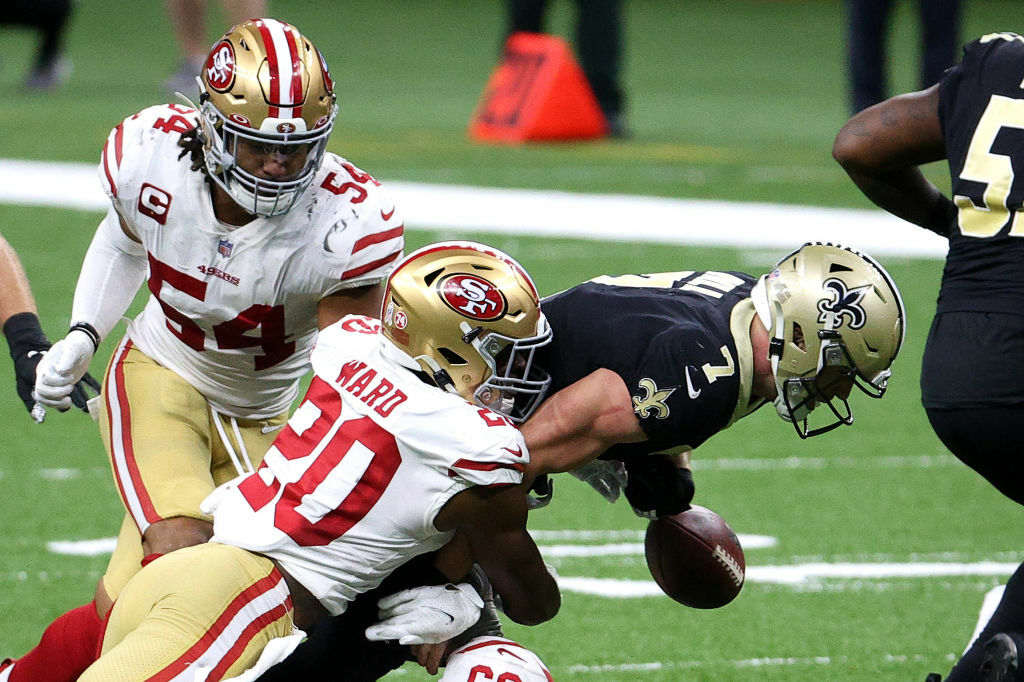 4/14
NEW ORLEANS, LOUISIANA – NOVEMBER 15: Taysom Hill #7 of the New Orleans Saints is tackled by Jimmie Ward #20 of the San Francisco 49ers during their game at Mercedes-Benz Superdome on November 15, 2020 in New Orleans, Louisiana. (Photo by Chris Graythen/Getty Images)

After last week’s poetry in motion, New Orleans might be in for some writer’s block if Drew Brees is sidelined for an extended period. For all the years of Sean Payton talking up Taysom Hill, this should be where the Saints find out if he’s the future of the franchise at QB, right? 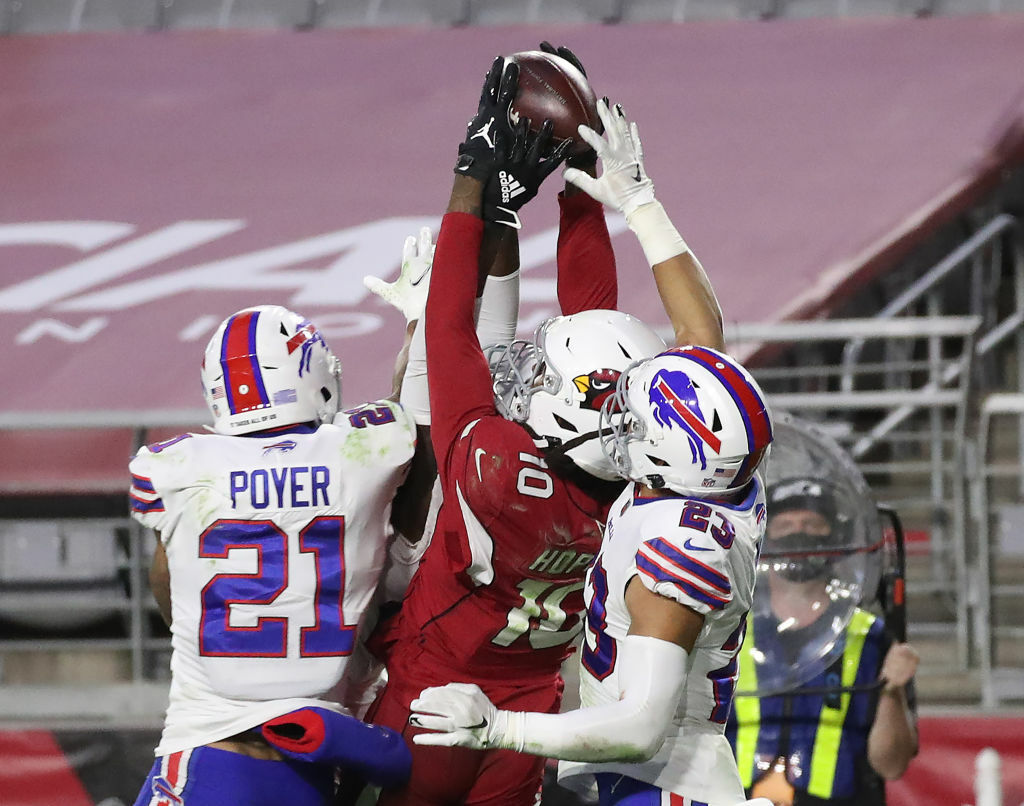 My preseason MVP pick is looking pretty good right now. Kyler Murray continued his record-setting pace, and paired with DeAndre Hopkins for the indisputable play of the year. Don’t look now, but Arizona is atop the NFC West in a three-way tie for first place at 6-3 and has a chance to dispatch of Seattle by completing a season sweep on Thursday. Speaking of the Seahawks… 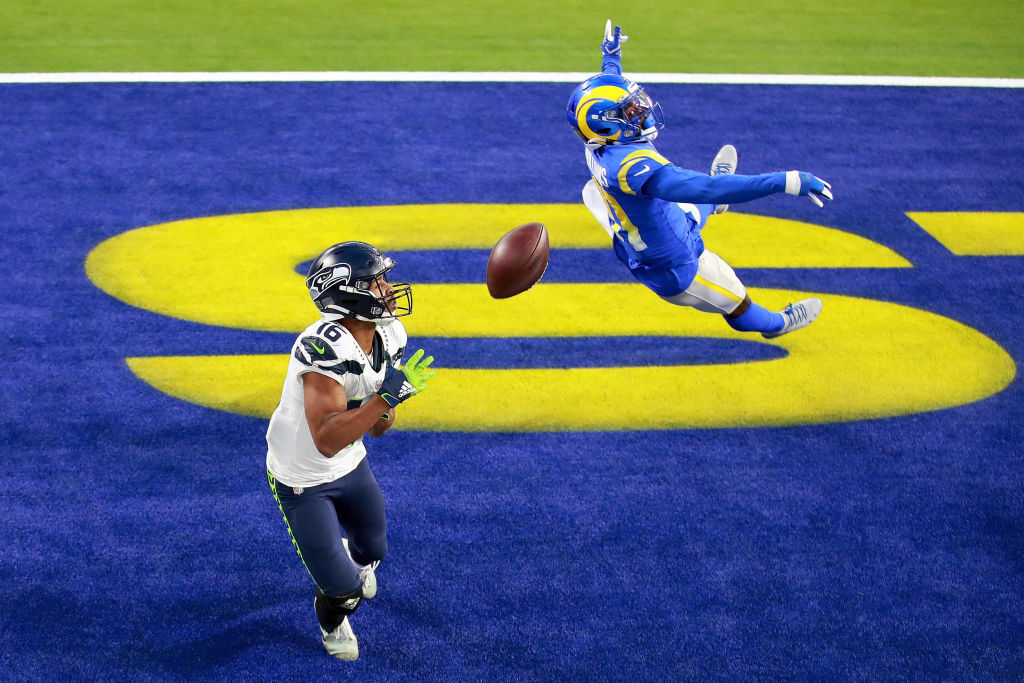 6/14
INGLEWOOD, CALIFORNIA – NOVEMBER 15: Tyler Lockett #16 of the Seattle Seahawks misses a catch in the end zone against Darious Williams #31 of the Los Angeles Rams at SoFi Stadium on November 15, 2020 in Inglewood, California. (Photo by Joe Scarnici/Getty Images)

If Pete Carroll doesn’t have space in his brain for fixing his defense, he’d better make room for getting Russell Wilson to stop turning the ball over at an unprecedented rate (for him, anyway). Forget Wilson’s first MVP — Seattle’s season depends on whether they can get him some help before it’s too late. 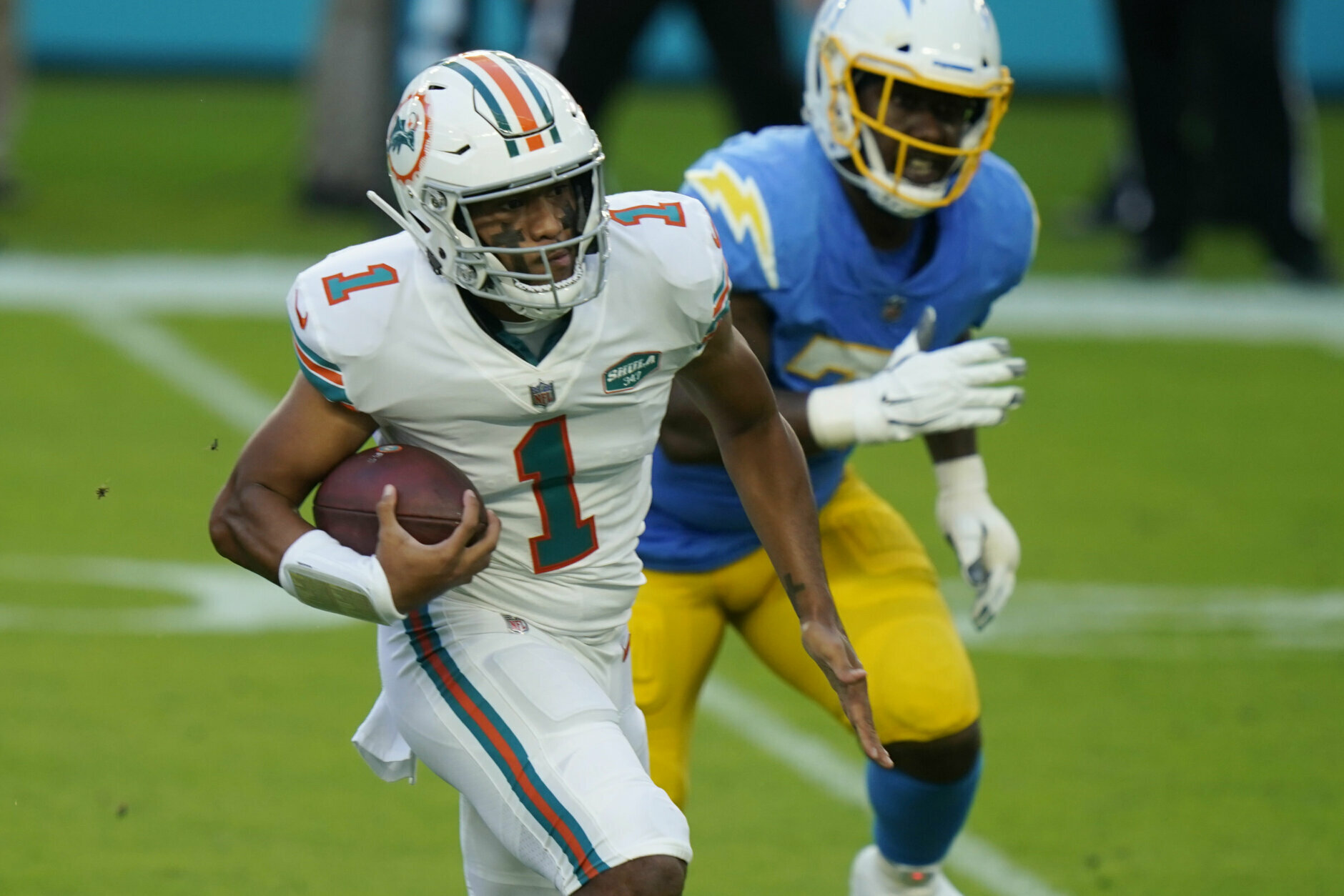 First, count me among those who want to see Miami make the throwback uniforms the everyday unis. Clean, classic, beautiful — just like the Dolphins sitting at 6-3 and off to their best start in 19 years.

Even as the Chargers are losing in every way possible, they won big by drafting Justin Herbert, the first QB in NFL history to throw multiple touchdowns in six straight games. He and Tua Tagovailoa, whose five touchdowns are the third-most by a quarterback without an interception in his first three starts, seem destined to do this forever. 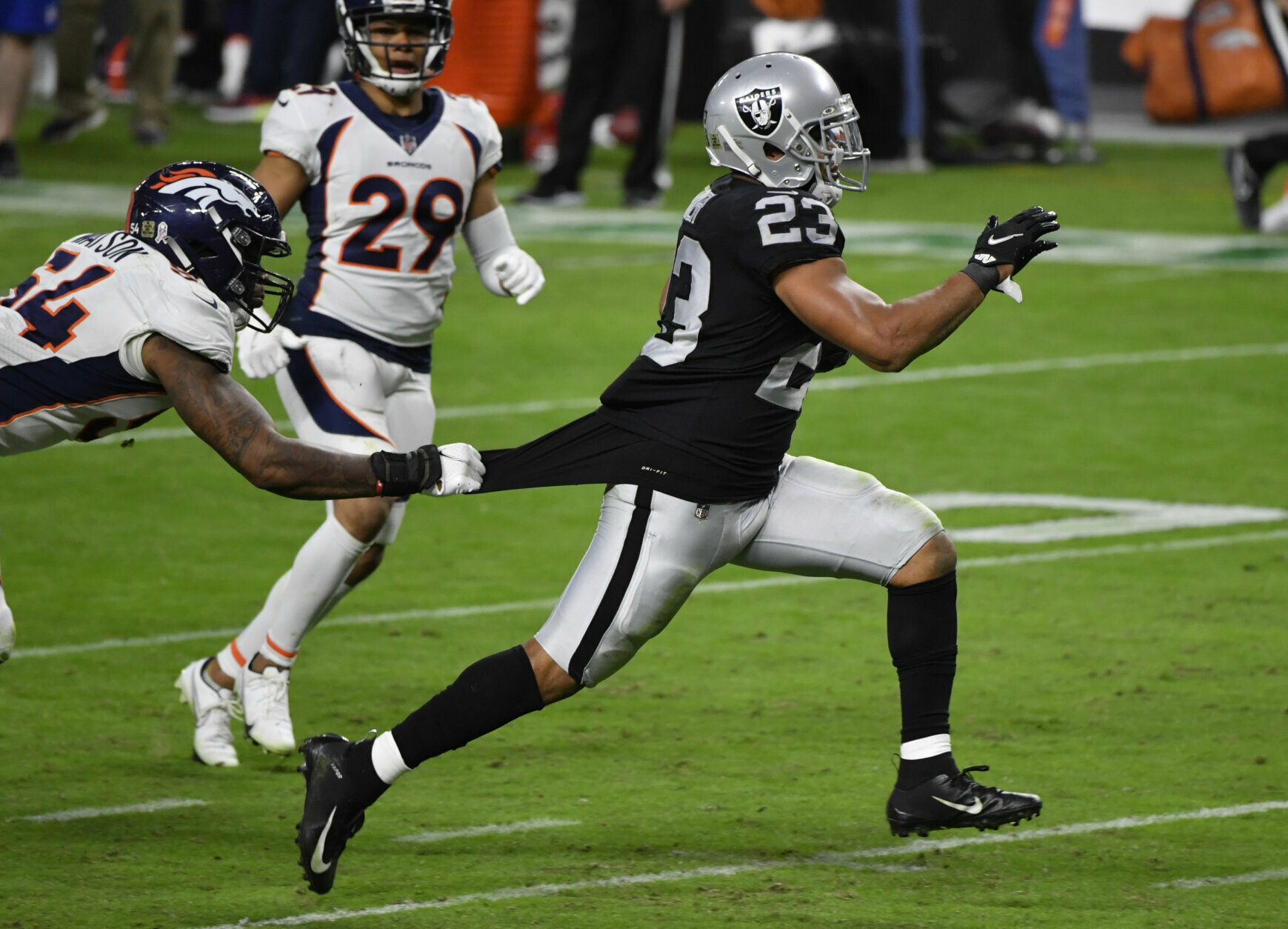 8/14
Las Vegas Raiders running back Devontae Booker #23 carries the ball during the second half against the Denver Broncos during an NFL football game, Sunday, Nov. 15, 2020, in Las Vegas. (AP Photo/Jeff Bottari)

Las Vegas used a dominant run game and four Drew Lock interceptions to win its third straight game and move to 6-3 in a wide open conference. If the Raiders beat the Chiefs in primetime to sweep the defending champs, the stretch run sets up nicely for the Silver and Black to stun the league and win the AFC West. 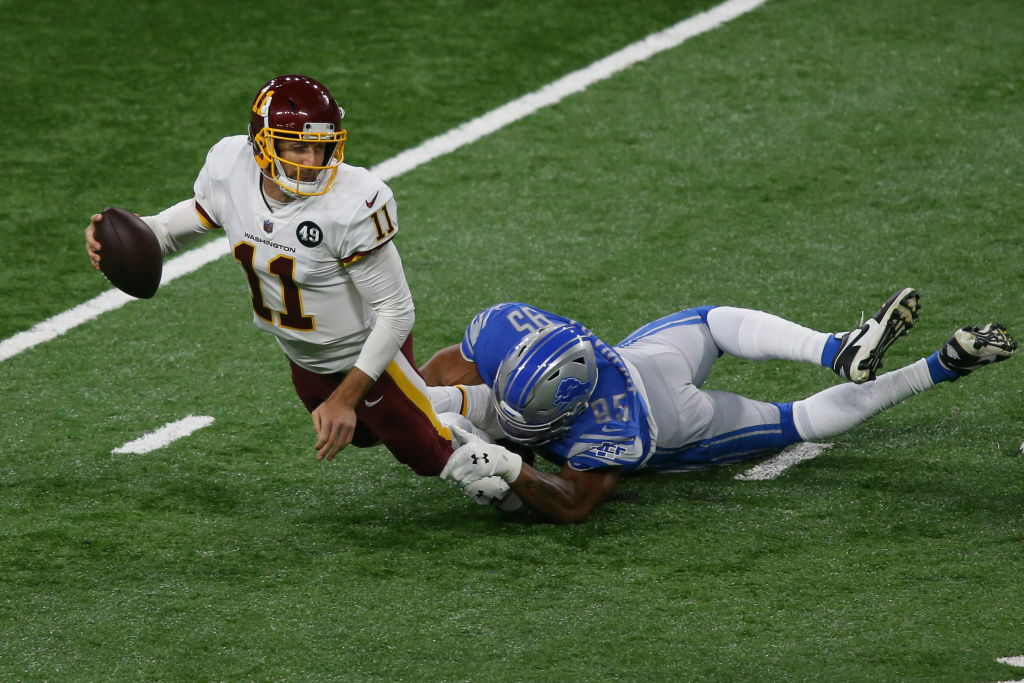 To paraphrase Bill Parcells, Washington is exactly what their record says they are: A 2-7 team that got swept by the awful Giants and lost in Detroit, where the Lions hadn’t won in 385 days. Alex Smith’s career day shows the Burgundy and Gold have just enough to be competitive but are still a long way from being good. 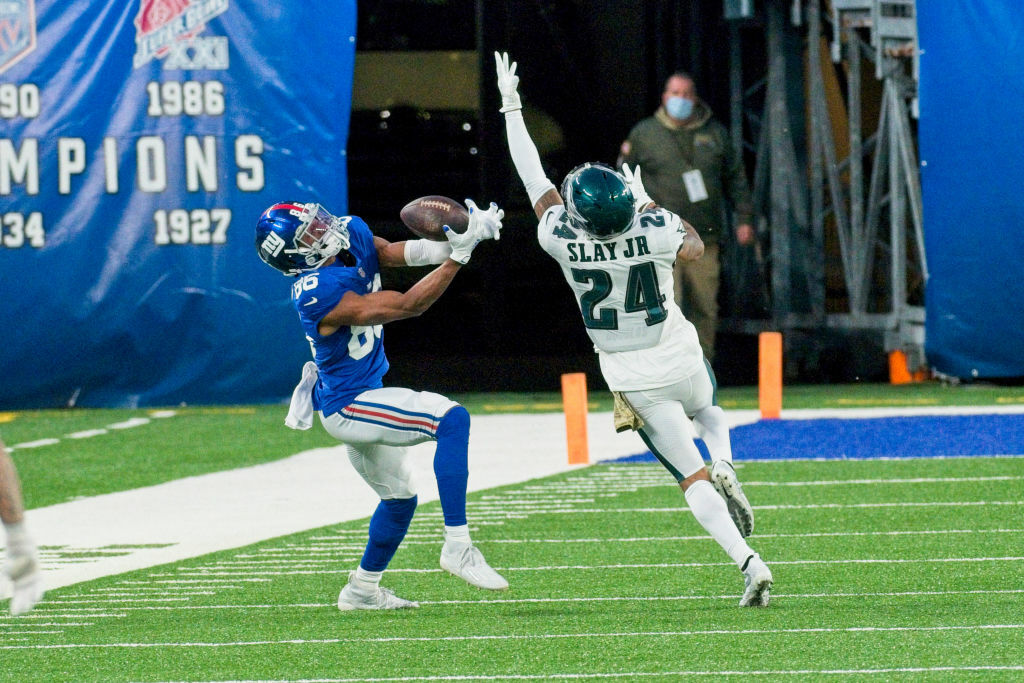 Good luck figuring out the NFC East, the first division to have only 10 wins through the first 10 weeks of a season. Philly is winless when they play day games, and the Giants have yet to beat anyone outside the division. All four teams in the NFC Least should be thankful there’s no relegation in the NFL. 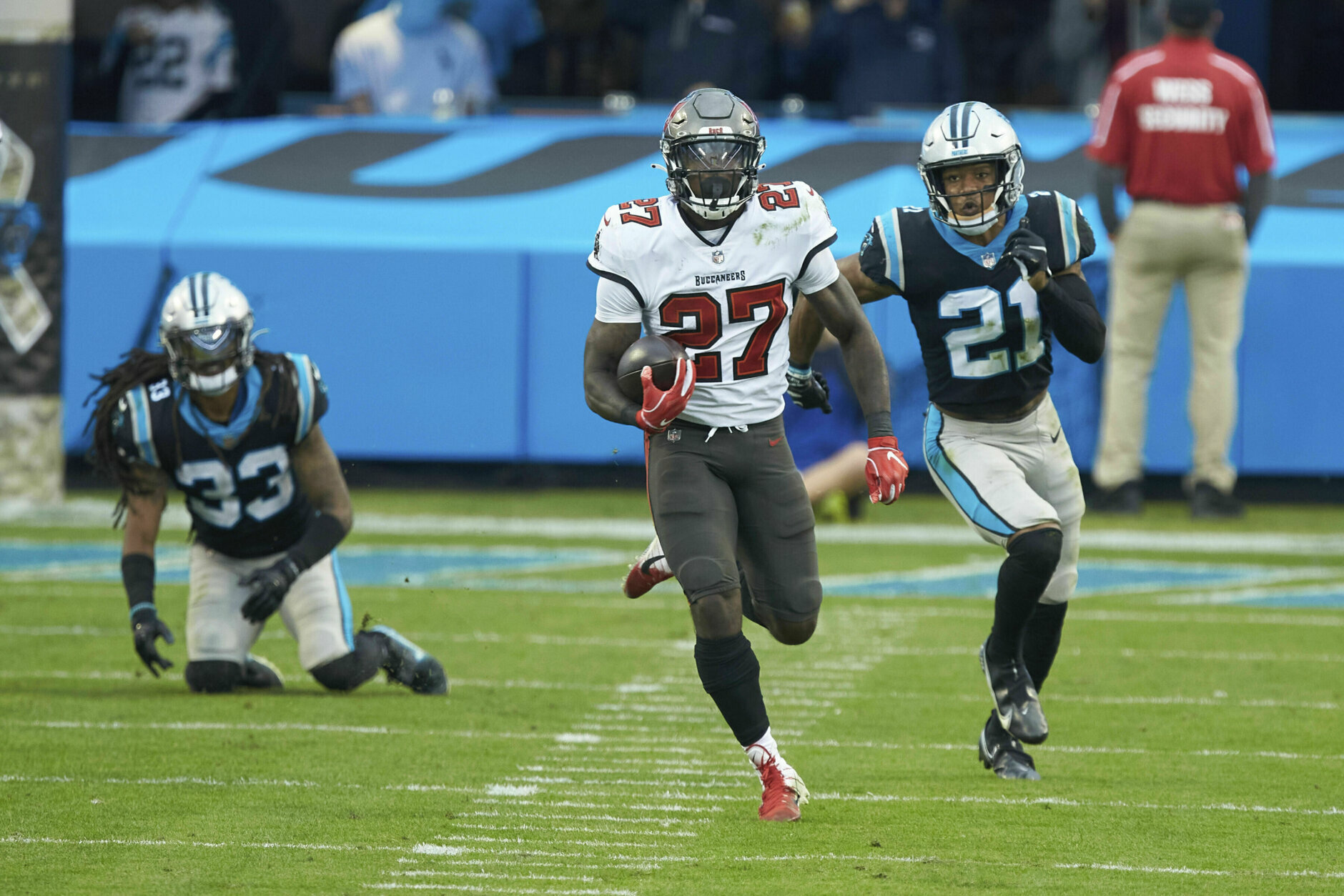 11/14
Tampa Bay Buccaneers running back Ronald Jones II (27) runs away from the pursuit of Carolina Panthers safety Jeremy Chinn (21) on his way to a 98-yard touchdown run during an NFL football game, Sunday, Nov. 15, 2020, in Charlotte, N.C. (AP Photo/Brian Westerholt)

Tampa Bay followed up a blowout loss featuring the fewest rush attempts in history with a blowout win highlighted by a 210-yard rushing effort to complement Tom Brady’s 341-yard, 3-TD rebound. Did I mention one-handed JPP got a pick?! Not bad for a team literally playing on short rest. 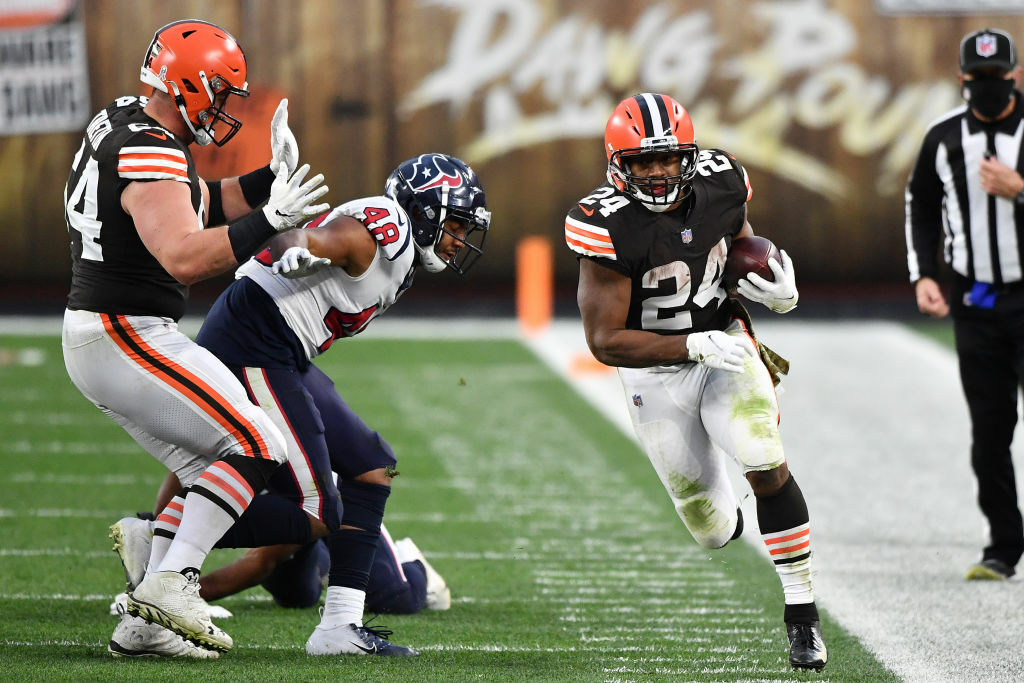 12/14
CLEVELAND, OHIO – NOVEMBER 15: Nick Chubb #24 of the Cleveland Browns runs the ball for 59 yards against the Houston Texans during the second half at FirstEnergy Stadium on November 15, 2020 in Cleveland, Ohio. (Photo by Jamie Sabau/Getty Images)

Nick Chubb is a bad beat for bettors but the best thing to happen to Cleveland; the Browns are 4-1 and average over 200 rushing yards per game with Chubb in the lineup this season. This is a wild card contender as long as he and the Browns’ real Gs keep keepin’ on. 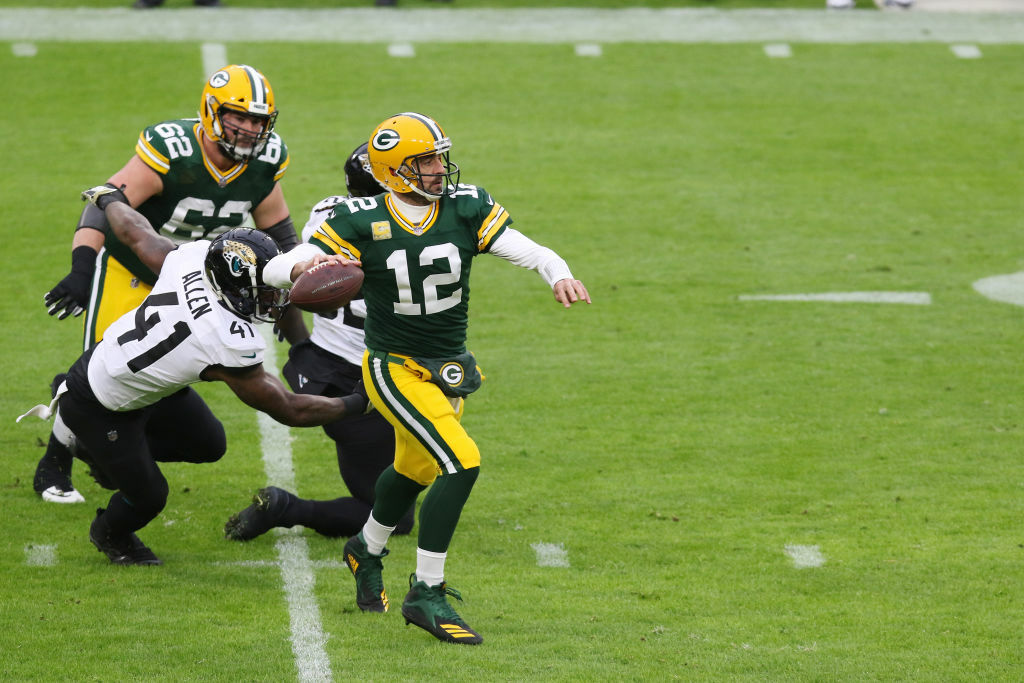 Aaron Rodgers threw his first interception at home since Week 6 of last season, but Green Bay was still a winner despite the sloppy showing against a team it should have blown out. Good teams find ways to win without their A-game and the Packers certainly did. 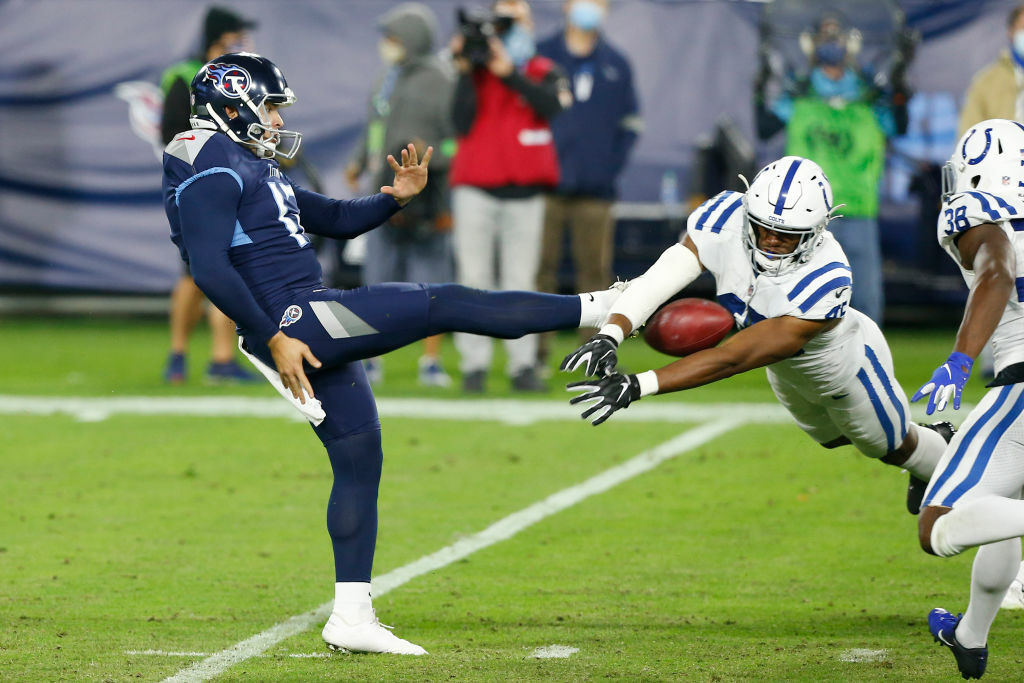 Y’all can focus on Philip Rivers making history or what this Indianapolis win means for the AFC South race. For me, this was about the resilience of the human spirit exhibited by Corey Davis in the wake of tragedy and a not-so-subtle reminder that special teams matter every bit as much as offense and defense.