Devastating debuts, a reversal of fortunes, a one-sided battle between old quarterbacks and a Swift defeat highlight the NFL Week 1 Recap. 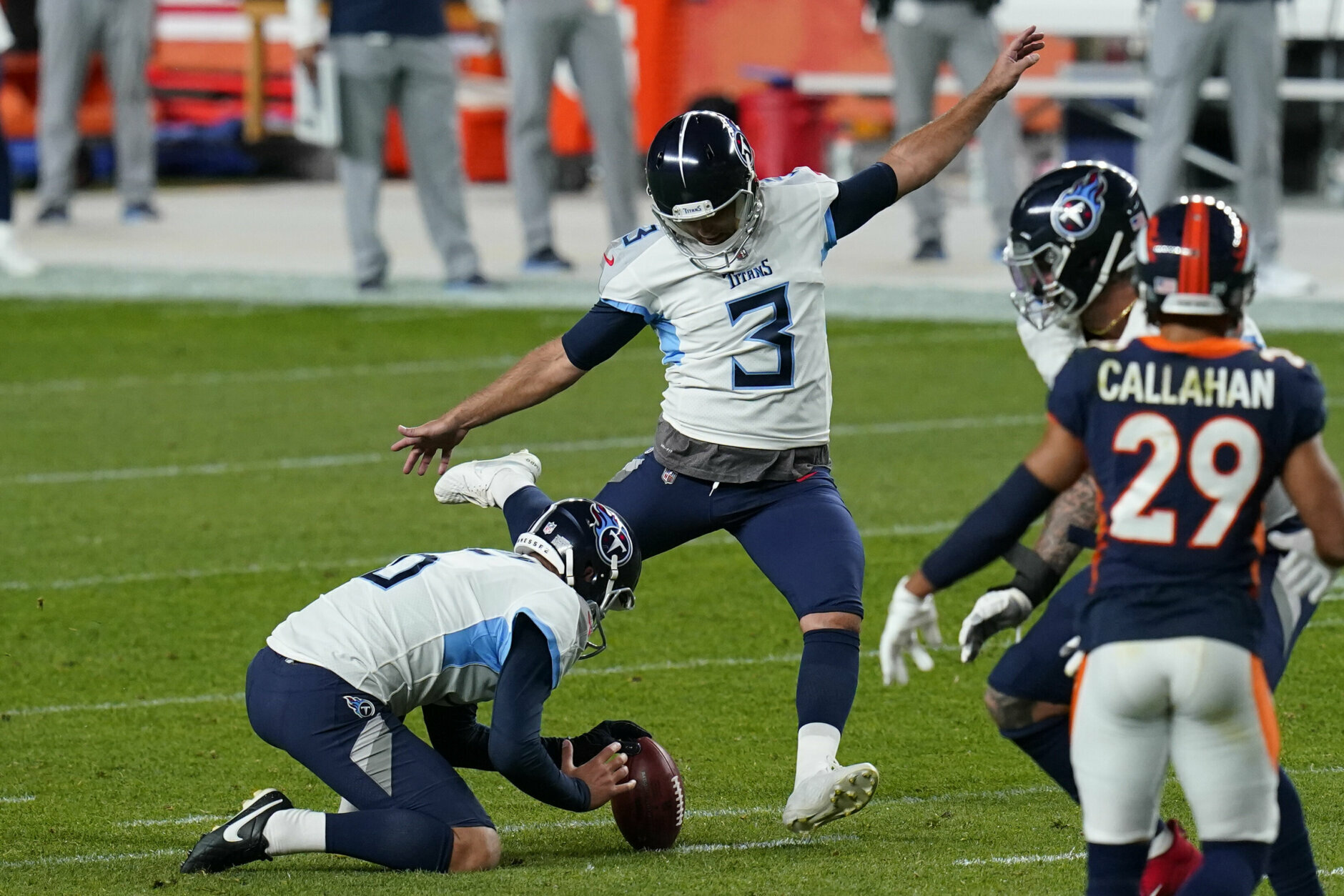 1/16
Tennessee Titans kicker Stephen Gostkowski (3) unsucessfully attempts a field goal against the Denver Broncos during the first half of an NFL football game, Monday, Sept. 14, 2020, in Denver. (AP Photo/Jack Dempsey)

On this night, redemption was spelled G-O-S-T … you get the idea. Stephen Gostkowski missed three field goals in a game for the first time in his career, and an extra point to leave 10 points on the field in Denver — but he hit the one that counted most to save the day for Tennessee. It’ll be interesting to see if it’s enough to save his job. 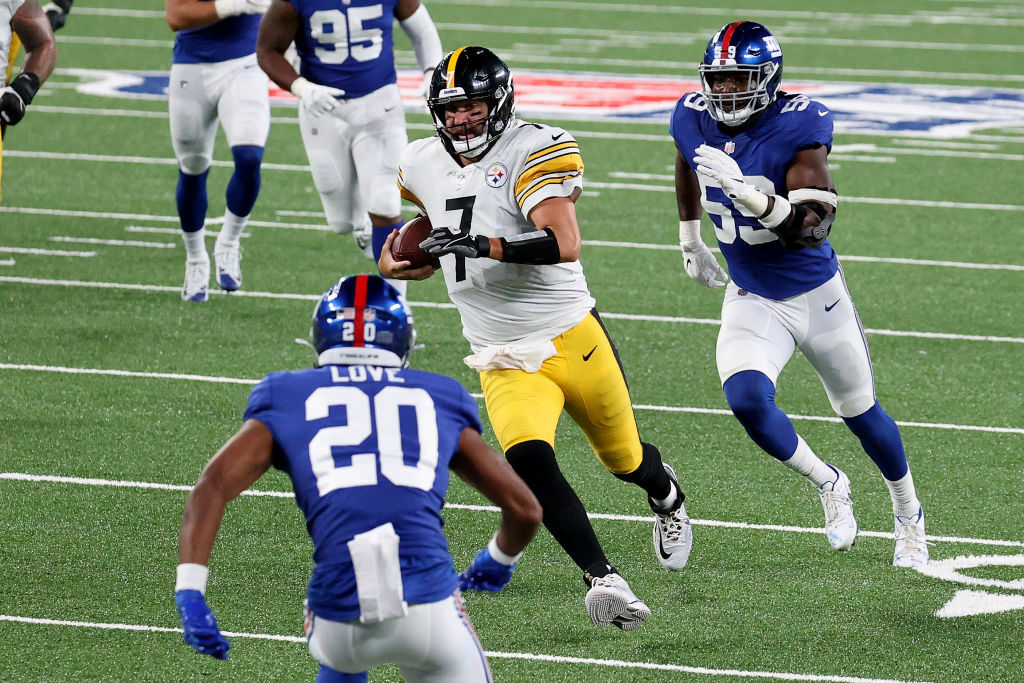 2/16
EAST RUTHERFORD, NEW JERSEY – SEPTEMBER 14: Ben Roethlisberger #7 of the Pittsburgh Steelers runs with the ball against the New York Giants during the second quarter in the game at MetLife Stadium on September 14, 2020 in East Rutherford, New Jersey. (Photo by Al Bello/Getty Images)

Pittsburgh was happy to have Big Ben back but Big Blue really blew this one; the Giants had a 19-play drive end in a turnover — tied for the longest such drive since 1999 — and were outrushed 141-29 after generating a putrid -3 rushing yards in the first half. To put that in perspective: Ben Roethlisberger outrushed Saquon Barkley 9-6. It’s going to be a long season in New York.

Behold: The perfect visual for what we should expect from both Ezekiel Elliott and the Rams defense in 2020.

Speaking of visuals, SoFi Stadium has replaced Dallas’ AT&T Stadium as the league’s most aesthetically pleasing home field — I’m just not sure either home team will be described that way this season. 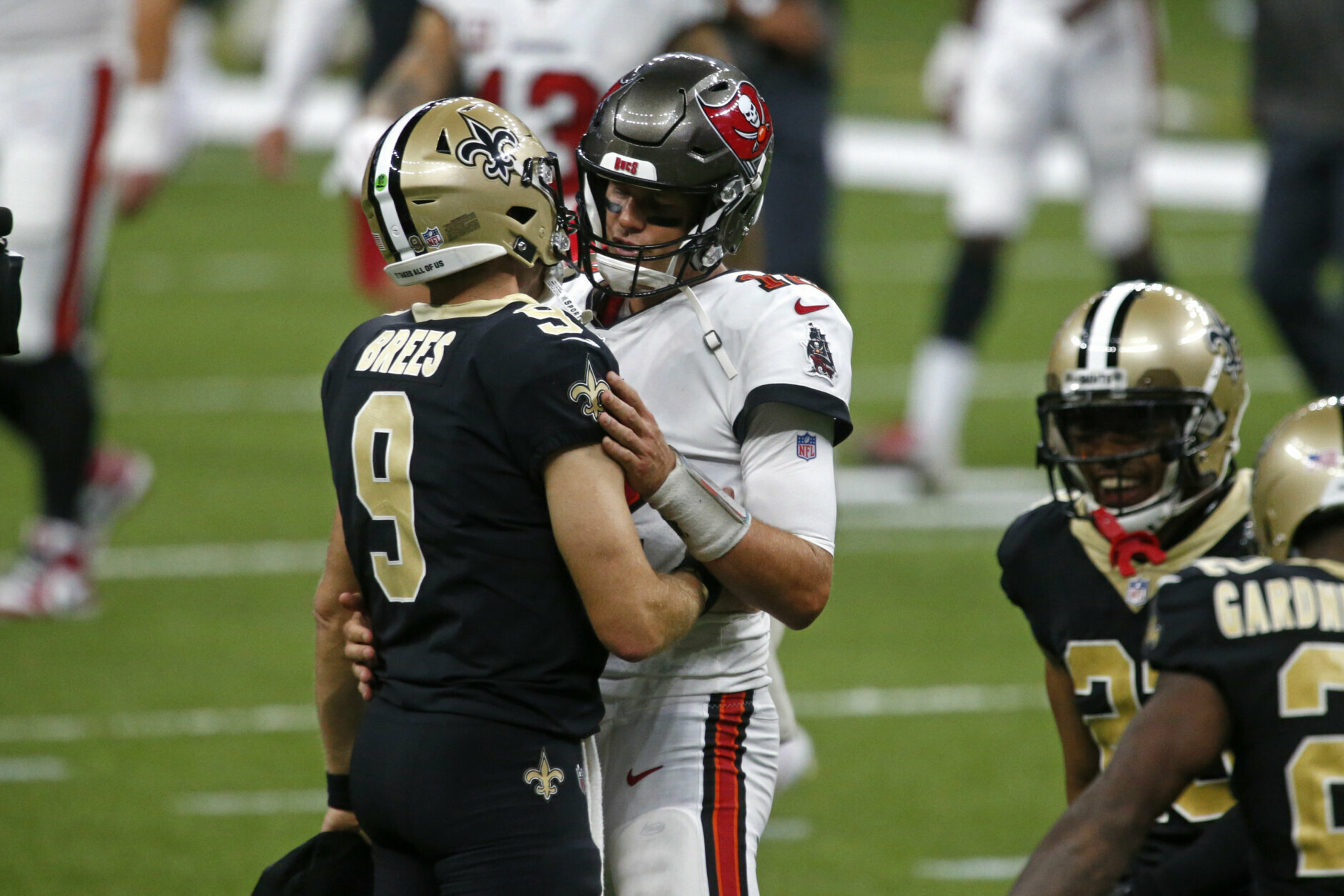 In the NFL’s first matchup of 40-year-old starting quarterbacks, Drew Brees and Tom Brady both looked their ages, but Brees broke another record to help ruin Brady’s Bucs debut that should temper some of the talk of Tampa’s title hopes. There was a Super Bowl team on the field in New Orleans, and it wasn’t the Bucs. 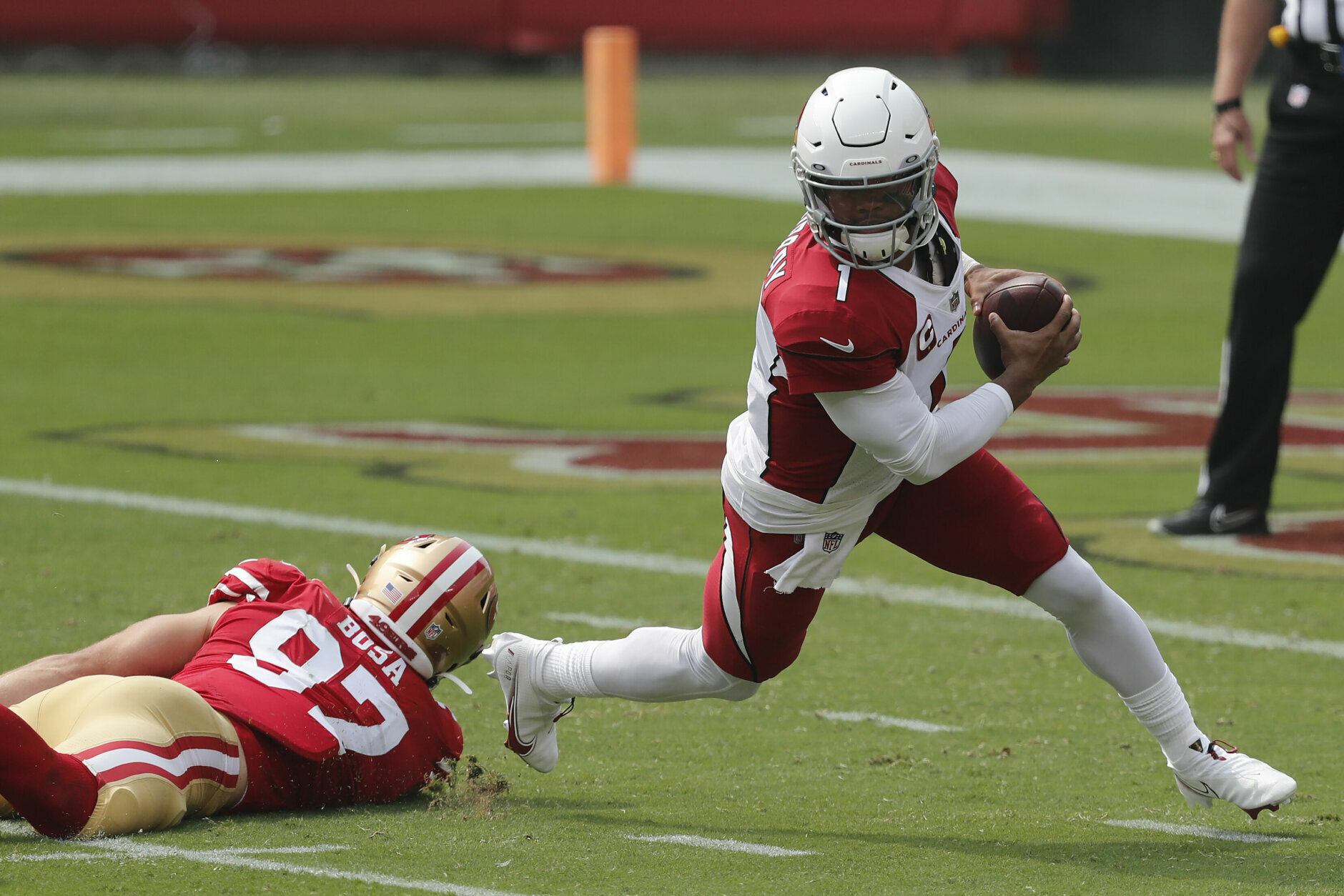 Given the way Kyler Murray gives the 49ers fits and his immediate connection with DeAndre Hopkins (career-high 14 catches for 151 yards in his Cardinals debut), I’m feeling really good about my MVP pick. 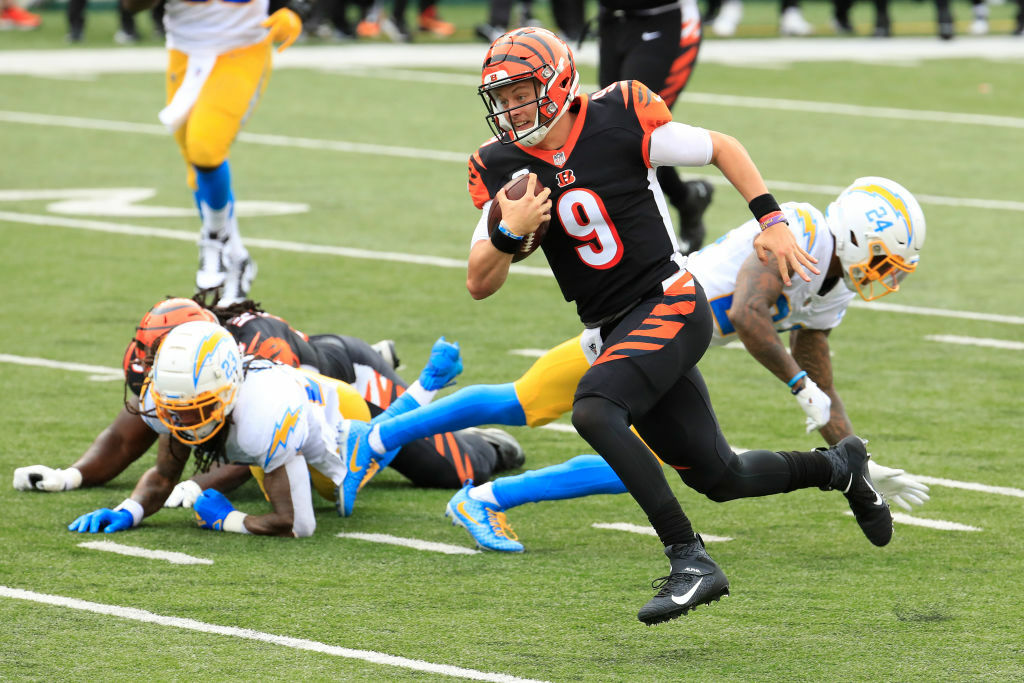 6/16
CINCINNATI, OHIO – SEPTEMBER 13: Quarterback Joe Burrow #9 of the Cincinnati Bengals rushes with the ball before scoring his first career NFL touchdown against the Los Angeles Chargers during the first quarter at Paul Brown Stadium on September 13, 2020 in Cincinnati, Ohio. (Photo by Andy Lyons/Getty Images)

Get used to this, Cincinnati. Joe Burrow is good — but not good enough to outrun decades of ineptitude. Not yet, anyway. 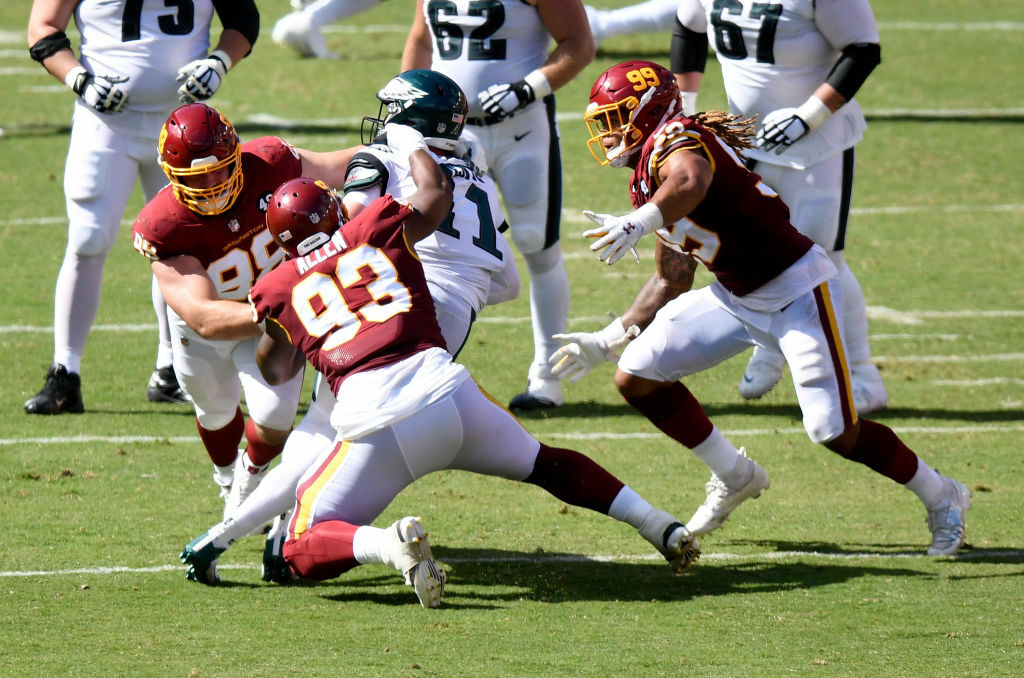 7/16
LANDOVER, MD – SEPTEMBER 13: Matthew Ioannidis #98, Jonathan Allen #93 and Chase Young #99 of the Washington Football Team tackle Carson Wentz #11 of the Philadelphia Eagles in the second half at FedExField on September 13, 2020 in Landover, Maryland. (Photo by Greg Fiume/Getty Images)

Talk about a reversal of fortunes: A year after blowing a 17-0 lead in Philadelphia, Washington erased a 17-0 deficit to notch its first victory in a home opener since 2014 and first Week 1 win at home since 2011. Chase Young’s debut for a unit that feasted on Carson Wentz (eight sacks, three takeaways) might signal Washington’s defense will get a nickname before the team does — especially if they can replicate this effort on the road against Kyler Murray. 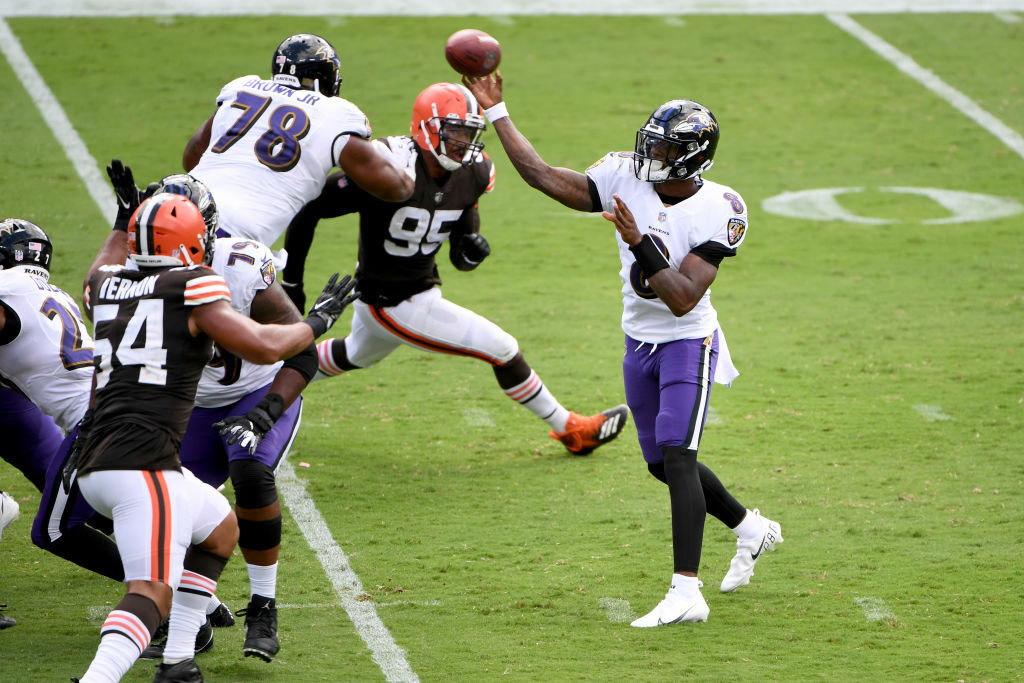 8/16
BALTIMORE, MARYLAND – SEPTEMBER 13: Lamar Jackson #8 of the Baltimore Ravens passes against the Cleveland Browns during the first half at M&T Bank Stadium on September 13, 2020 in Baltimore, Maryland. (Photo by Will Newton/Getty Images)

The Ravens run defense didn’t show the necessary improvement right away, but if Lamar Jackson really is miles ahead of where he was in his MVP season, good luck stopping Baltimore — the first team in NFL history to win three straight season openers by 30 points or more — from bum rushing the league on the way to the Lombardi Trophy.

This is quite the take on an American classic pic.twitter.com/xdvkL37mrX

Cam Newton bucked the old “look good, play good” adage and decades of the Patriot Way of playing offense: Cam’s 15 rush attempts were the most ever by a Patriots QB, his 75 rush yards were the most by a Pats QB since 1977 and New England was the most run-heavy it has ever been under Bill Belichick. If this worked for Tim Tebow, a healthy Cam has a legit shot at keeping the Patriots’ dynasty alive. 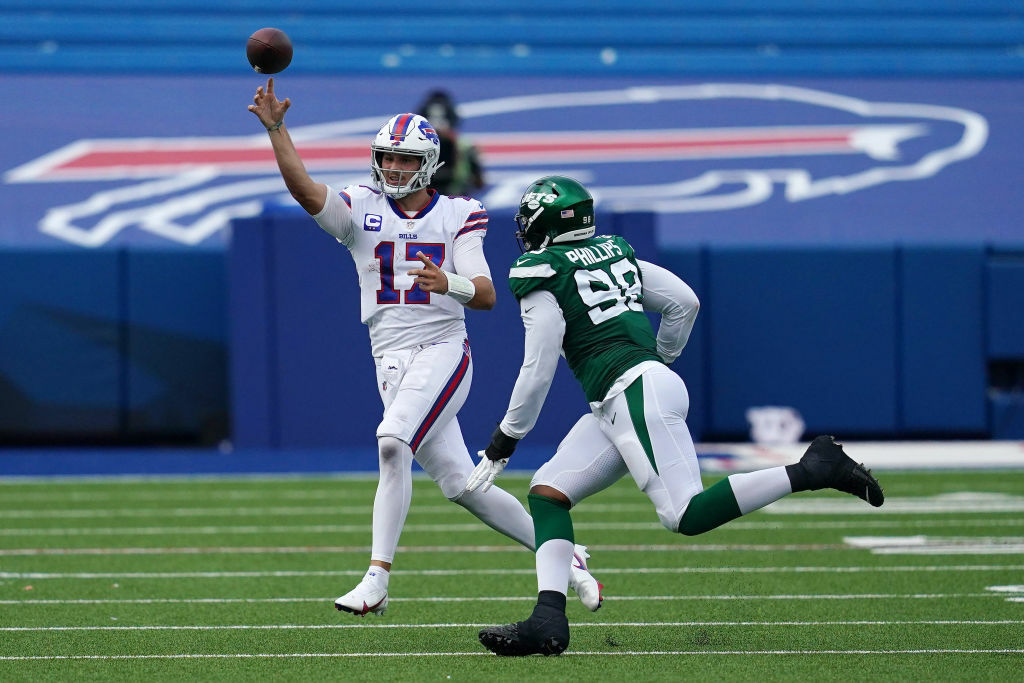 10/16
ORCHARD PARK, NEW YORK – SEPTEMBER 13: Josh Allen #17 of the Buffalo Bills is pursued by Kyle Phillips #98 of the New York Jets during the first half at Bills Stadium on September 13, 2020 in Orchard Park, New York. (Photo by Stacy Revere/Getty Images)

Josh Allen carved up a Jets defense that sure could use a guy like Jamal Adams, who is still taking shots at his old team from afar … 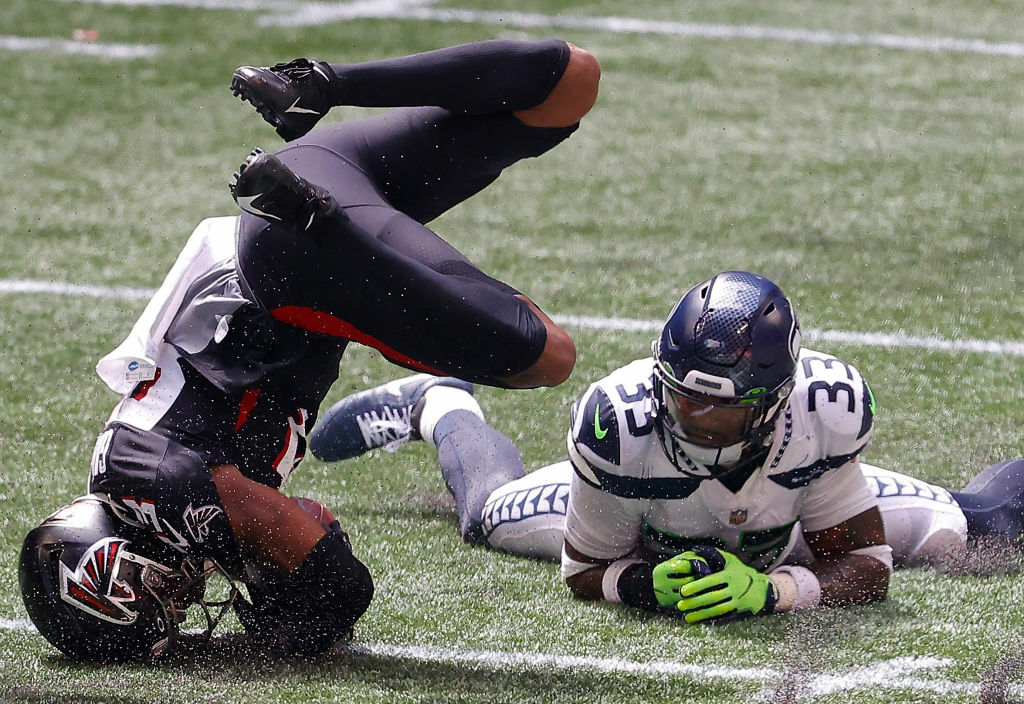 11/16
ATLANTA, GEORGIA – SEPTEMBER 13: Jamal Adams #33 of the Seattle Seahawks tackles Russell Gage #83 of the Atlanta Falcons after a reception in the first half at Mercedes-Benz Stadium on September 13, 2020 in Atlanta, Georgia. (Photo by Kevin C. Cox/Getty Images)

… after a helluva debut for Seattle, registering a game-high 12 tackles and a sack on a day when Russell Wilson became the second QB to pass for 30,000 yards and rush for 4,000 in his career. The NFC West is gonna be fun to watch this year. 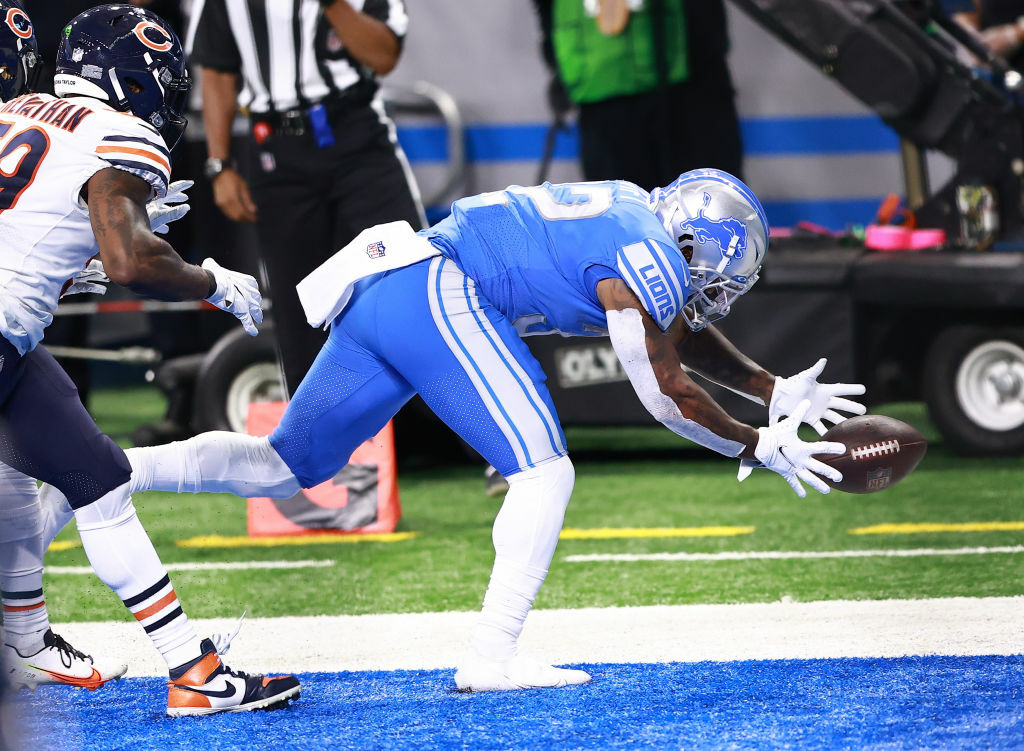 12/16
DETROIT, MI – SEPTEMBER 13: DAndre Swift #32 of the Detroit Lions drops a pass in the end zone late in the fourth quarter against the Chicago Bears at Ford Field on September 13, 2020 in Detroit, Michigan. (Photo by Rey Del Rio/Getty Images)

Mitchell Trubisky earned his Air Jordans with his clutch three-touchdown performance, but let’s be real: This is a very different story if D’Andre Swift doesn’t get a case of the butter fingers at the end of this game. Don’t be surprised if this one haunts to Detroit at season’s end in what figures to be a tightly contested division. 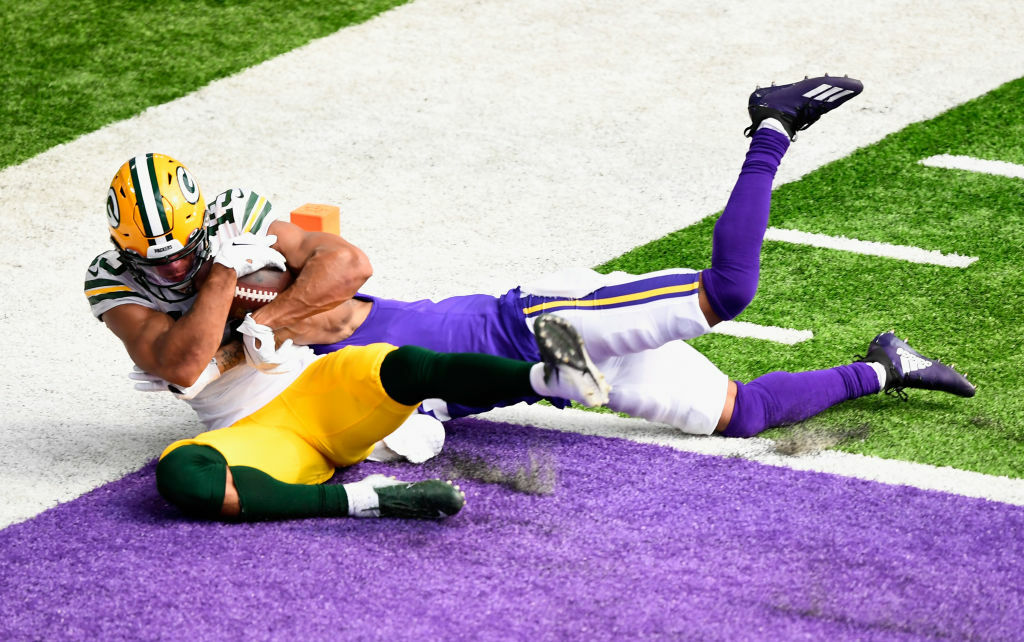 13/16
MINNEAPOLIS, MINNESOTA – SEPTEMBER 13: Allen Lazard #13 of the Green Bay Packers catches the ball for a touchdown against Mike Hughes #21 of the Minnesota Vikings during the fourth quarter of the game at U.S. Bank Stadium on September 13, 2020 in Minneapolis, Minnesota. The Packers defeated the Vikings 43-34. (Photo by Hannah Foslien/Getty Images)

While I’m tempted to leave this tweet here for every Green Bay score this season, the Packers dropped the most points ever on a Mike Zimmer Vikings squad many have said will challenge the Pack for the division title. Like I said: Minnesota will find ways to lose this year. 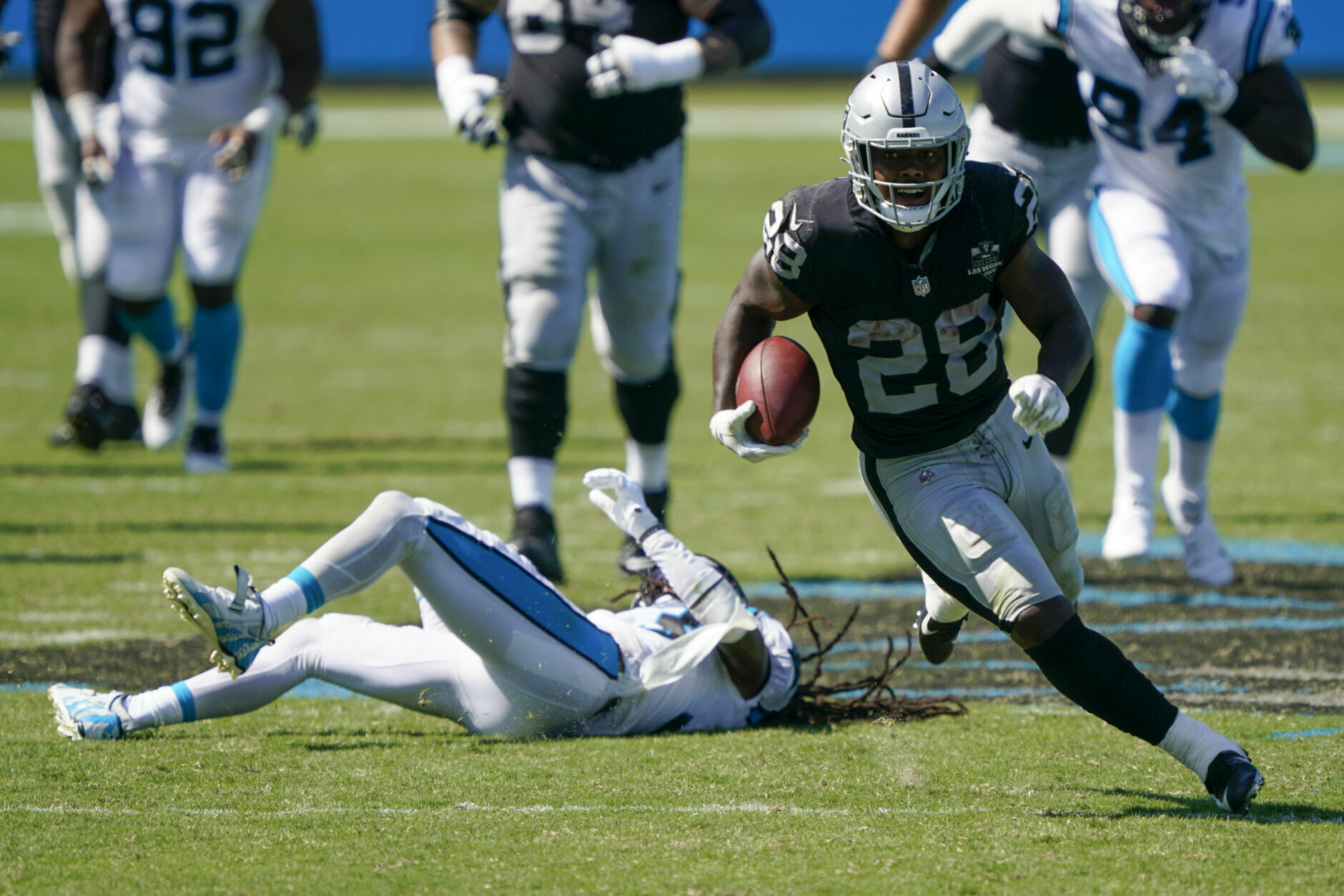 14/16
Las Vegas Raiders running back Josh Jacobs runs against the Carolina Panthers during the second half of an NFL football game Sunday, Sept. 13, 2020, in Charlotte, N.C. (AP Photo/Brian Blanco)

Look, I don’t know about comparing him to Sweetness, but Josh Jacobs outdueled the NFL’s highest-paid running back and looks ready to carry the Raiders offense when Derek Carr isn’t playing against the league’s most inexperienced defense. Next week’s Las Vegas debut against the Saints could be more compelling than previously thought. 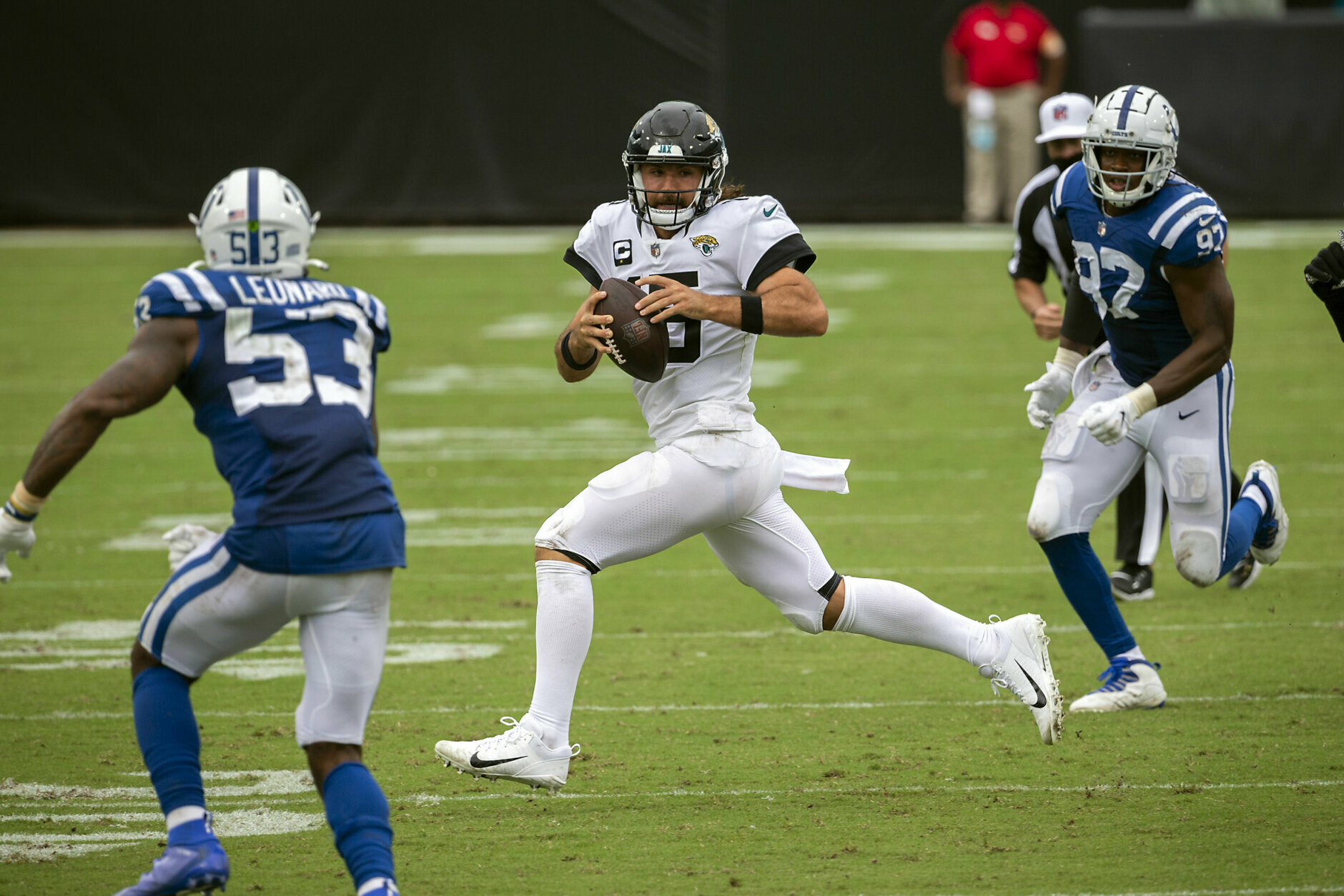 15/16
Jacksonville Jaguars quarterback Gardner Minshew (15) scrambles out of the pocket against the Indianapolis Colts defense during the second half of an NFL football game, Sunday, Sept. 13, 2020, in Jacksonville, Fla. (AP Photo/Stephen B. Morton)

Were it not for Washington’s win over Philly, Jacksonville dealing Indy its seventh straight season-opening loss would be the upset of Week 1. So enjoy first place while you can, Jaguars fans (both of you). Your mustached quarterback may be crowing now, but reality is coming. 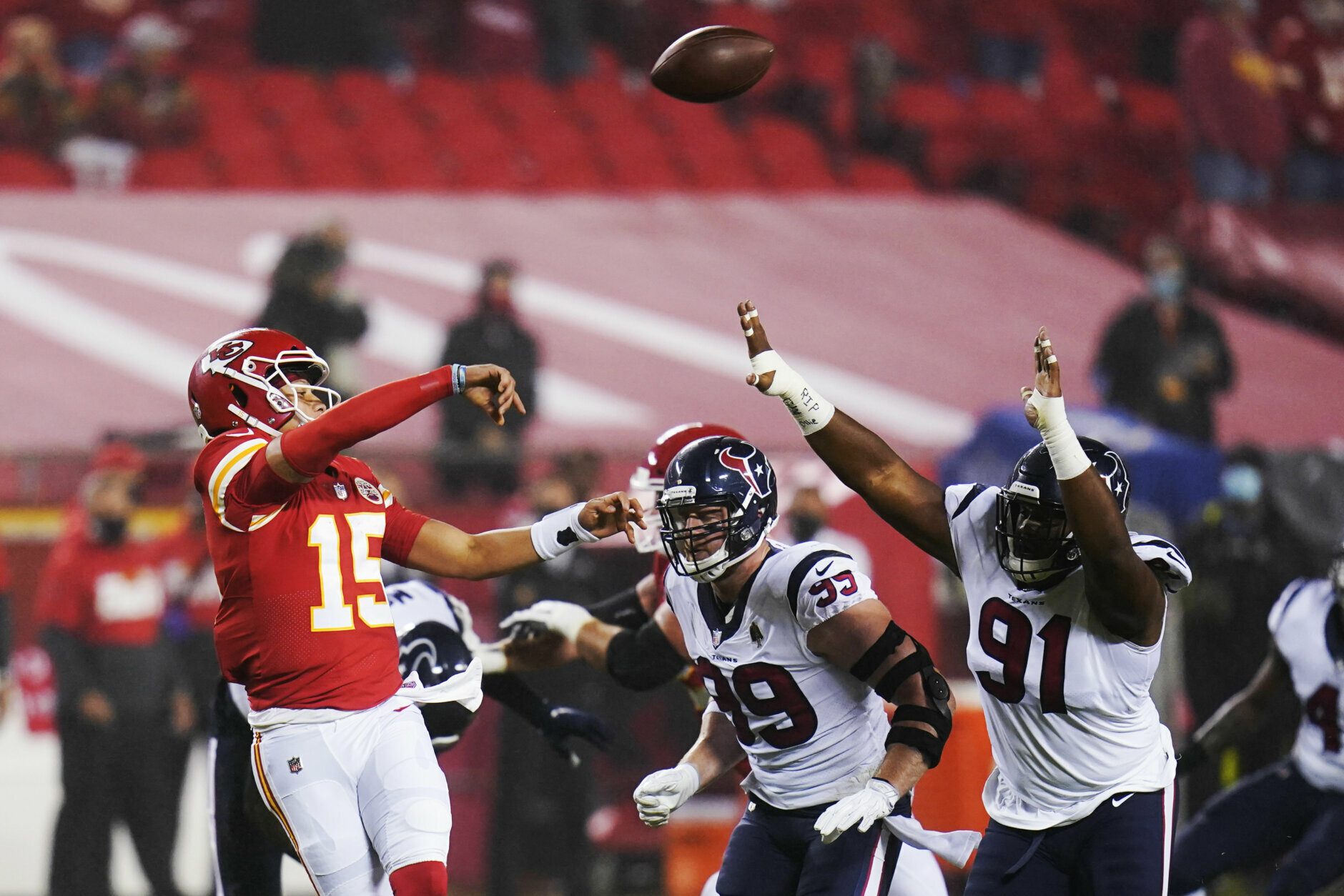 Patrick Mahomes is 7-0 with 23 touchdowns, 0 interceptions in the month of September. He’s the first player to throw three touchdown passes with no interceptions in three consecutive season openers. Mahomes’ greatness is as obvious as Houston’s needless regression.