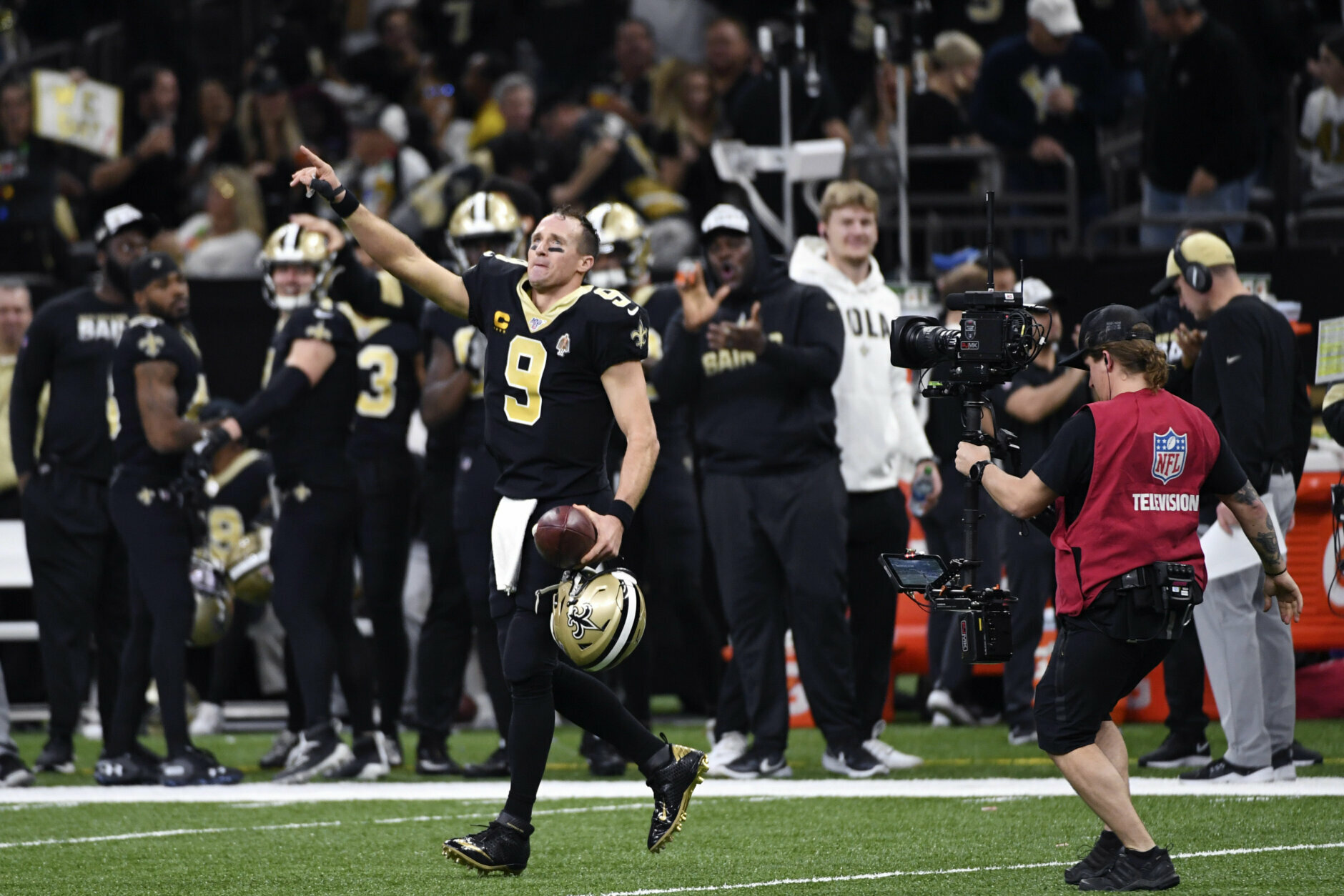 Who loves Monday nights more than Drew Brees? A year after setting the all-time passing yardage record against the Redskins on MNF, Brees claimed the all-time touchdown mark and the single-game completion percentage record (96.7%). Unlike Tom Brady, Brees looks like he’s still got enough in the tank to carry New Orleans deep into the postseason. 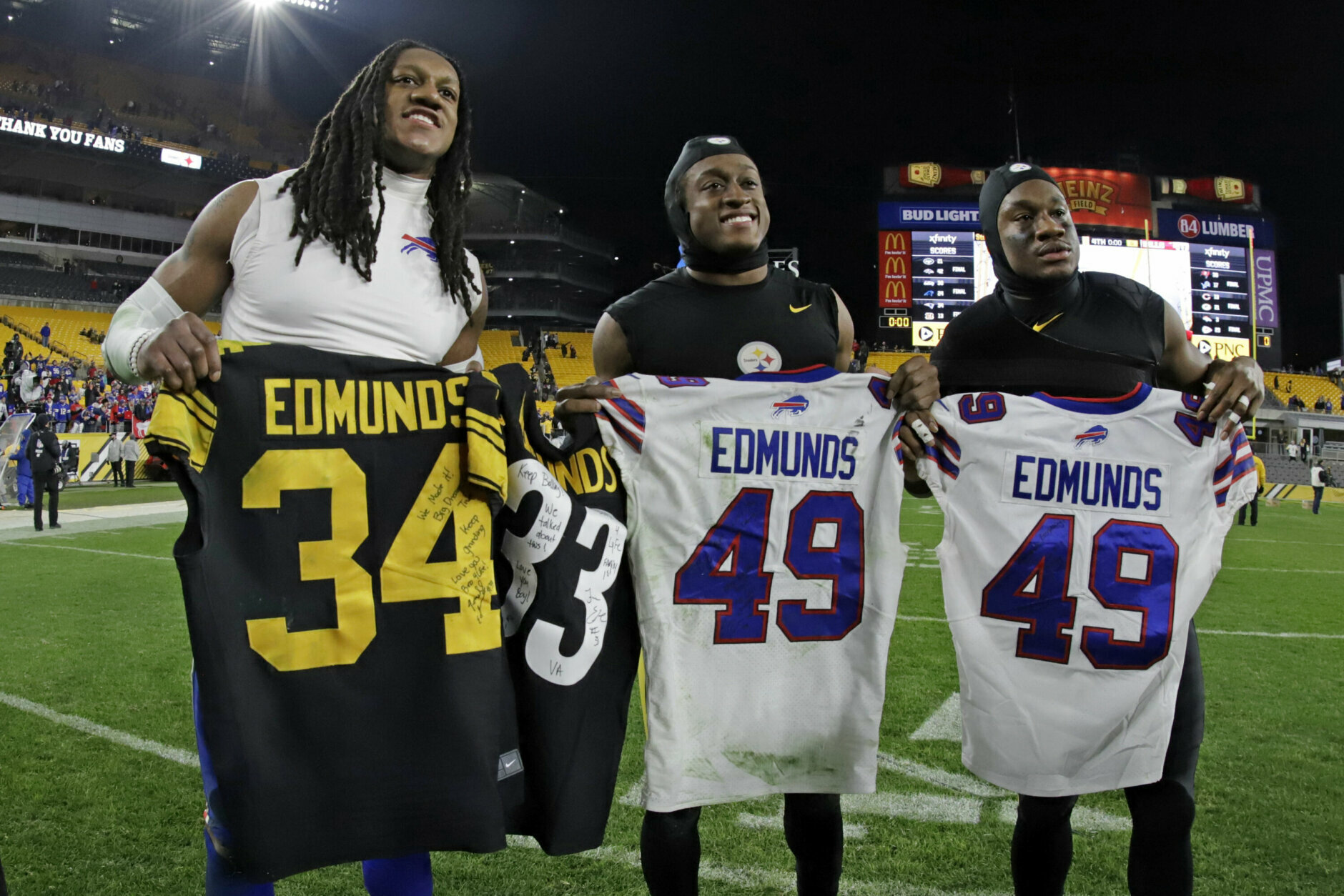 Buffalo, in just their second appearance on Sunday Night Football and first since 2007, clinched its second playoff berth in three years and first 10-win season in 20 years. But that wasn’t the biggest drought that ended in Pittsburgh: The Edmunds brothers’ family reunion was the first of its kind in 92 years and one of the greatest stories of the weekend. 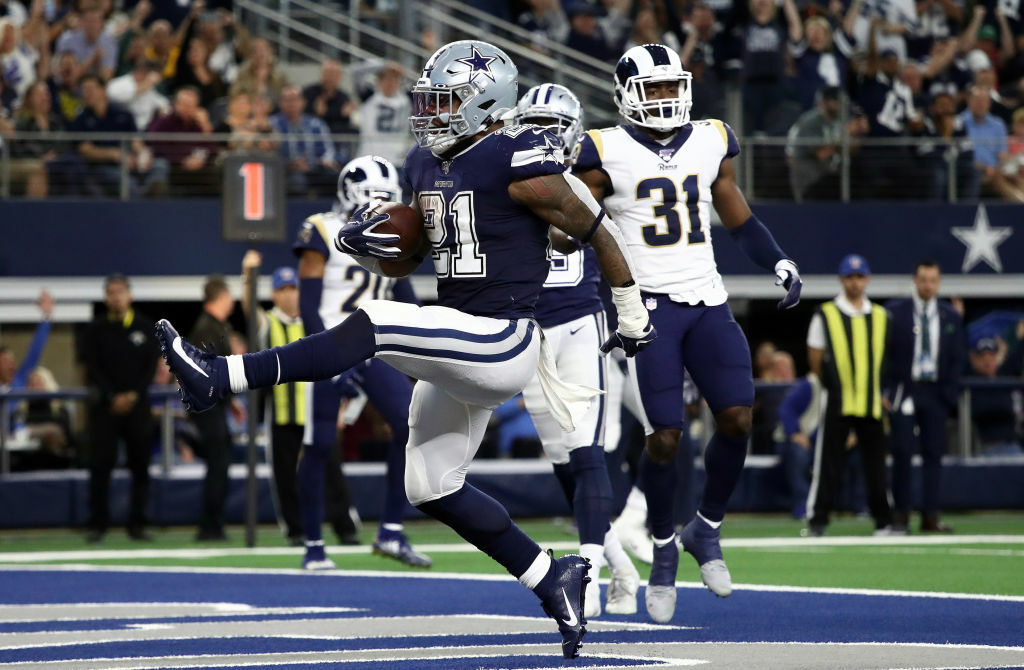 3/16
ARLINGTON, TEXAS — DEC. 15: Ezekiel Elliott #21 of the Dallas Cowboys runs for a touchdown against the Los Angeles Rams in the second quarter at AT&T Stadium on Dec. 15, 2019 in Arlington, Texas. (Getty Images/Ronald Martinez)

Knowing full well Philadelphia won in Washington, and with Wade Phillips back in Dallas for revenge, the Cowboys put together their best win of the year — and only victory over a team with a winning record. Both of these teams are woefully underachieving, but L.A.’s payroll and star power makes it a massive disappointment they’re likely to miss the postseason. 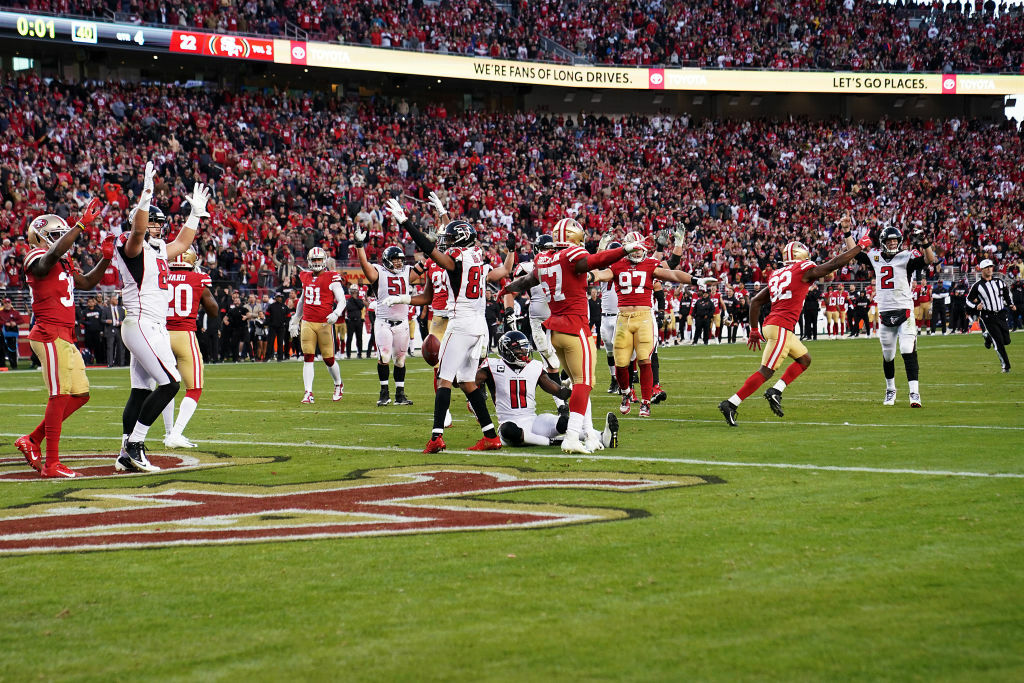 Kyle Shanahan couldn’t complete the sweep of his former teams but still clinched his first playoff berth as a head coach thanks to the Rams’ no-show in Dallas. The Niners better hope for another Rams no-show when they play in San Fran Sunday, or else the regular season-finale in Seattle will be moot. 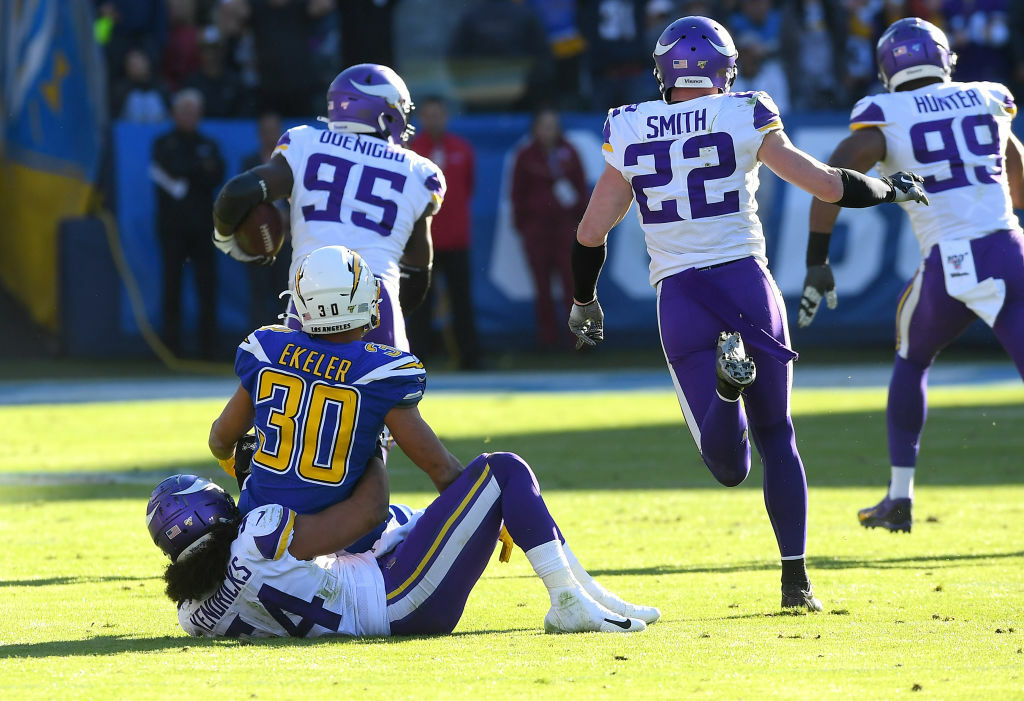 5/16
CARSON, CA — DEC. 15: Middle linebacker Eric Kendricks #54 of the Minnesota Vikings forces a fumble by running back Austin Ekeler #30 of the Los Angeles Chargers, allowing defensive end Ifeadi Odenigbo, #95, of the Minnesota Vikings to grab the ball and run for a touchdown in the second quarter of the game at Dignity Health Sports Park on Dec. 15, 2019 in Carson, California. (Getty Images/Jayne Kamin-Oncea)

L.A. somehow managed to turn the ball over seven (7!) times to a Vikings team sporting a 1-6 record in the Mountain and Pacific time zones under coach Mike Zimmer. Philip Rivers looks done and Anthony Lynn might be too if he doesn’t give Tyrod Taylor a chance to show what’s he’s got in the Chargers’ final two games. 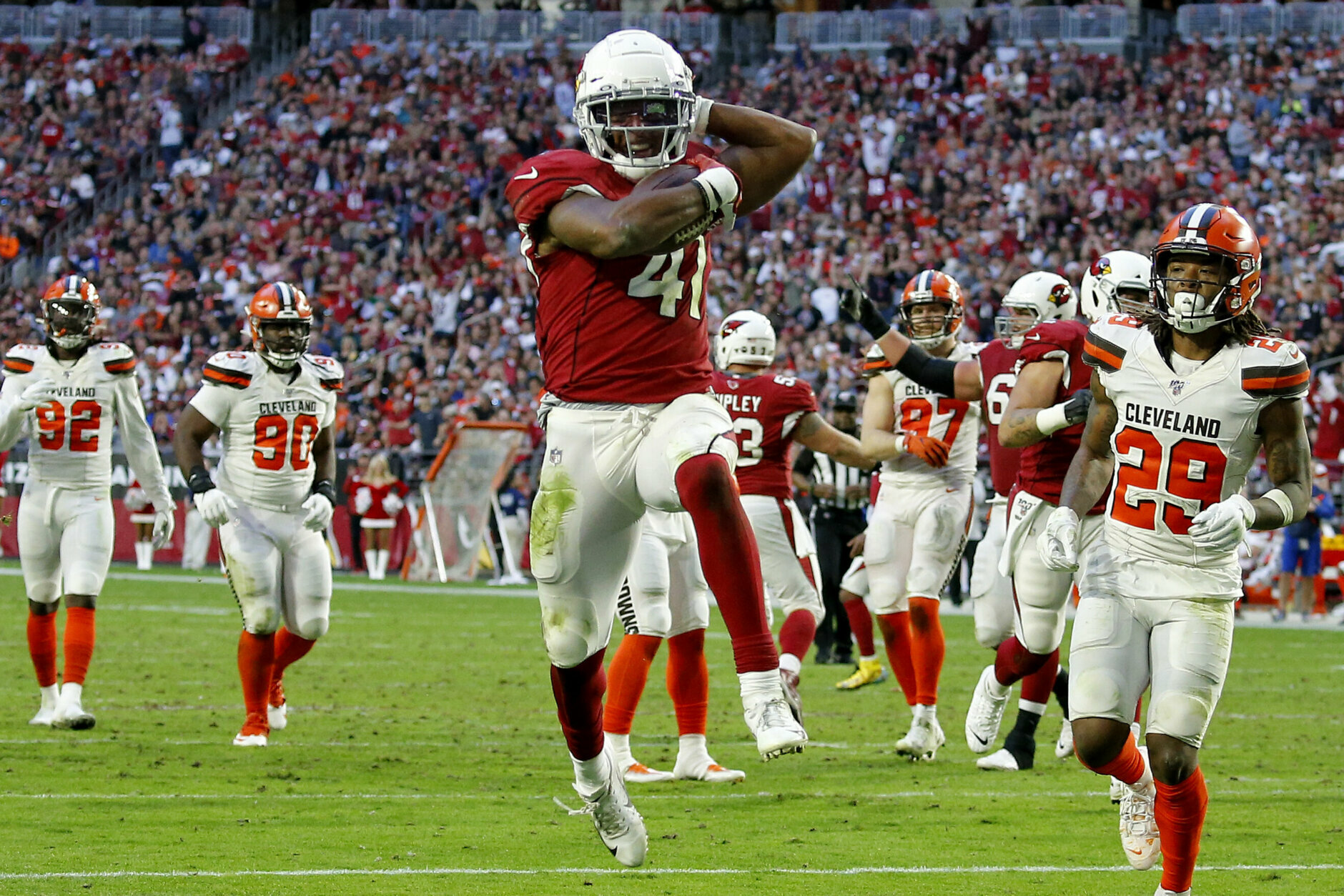 6/16
Arizona Cardinals running back Kenyan Drake (41) runs for his fourth touchdown of the game during the second half of an NFL football game against the Cleveland Browns, Sunday, Dec. 15, 2019, in Glendale, Ariz. (AP/Ross D. Franklin)

Kenyan Drake’s monster game somewhat overshadowed the duel between the NFL’s last two No. 1 overall picks in what was likely Larry Fitzgerald’s final game in Arizona. Because, you know, Kliff Kingsbury’s pitch to keep Fitz probably won’t include him stepping down as head coach.

Speaking of which, Cleveland’s commitment to Freddie Kitchens should get everyone in that building fired. The Browns clinched their 12th straight non-winning season despite coming into this season amid expectations every bit as big as their talk. It’s almost as if Cleveland is saying “hold my beer” in response to the Redskins’ chronic dysfunction. 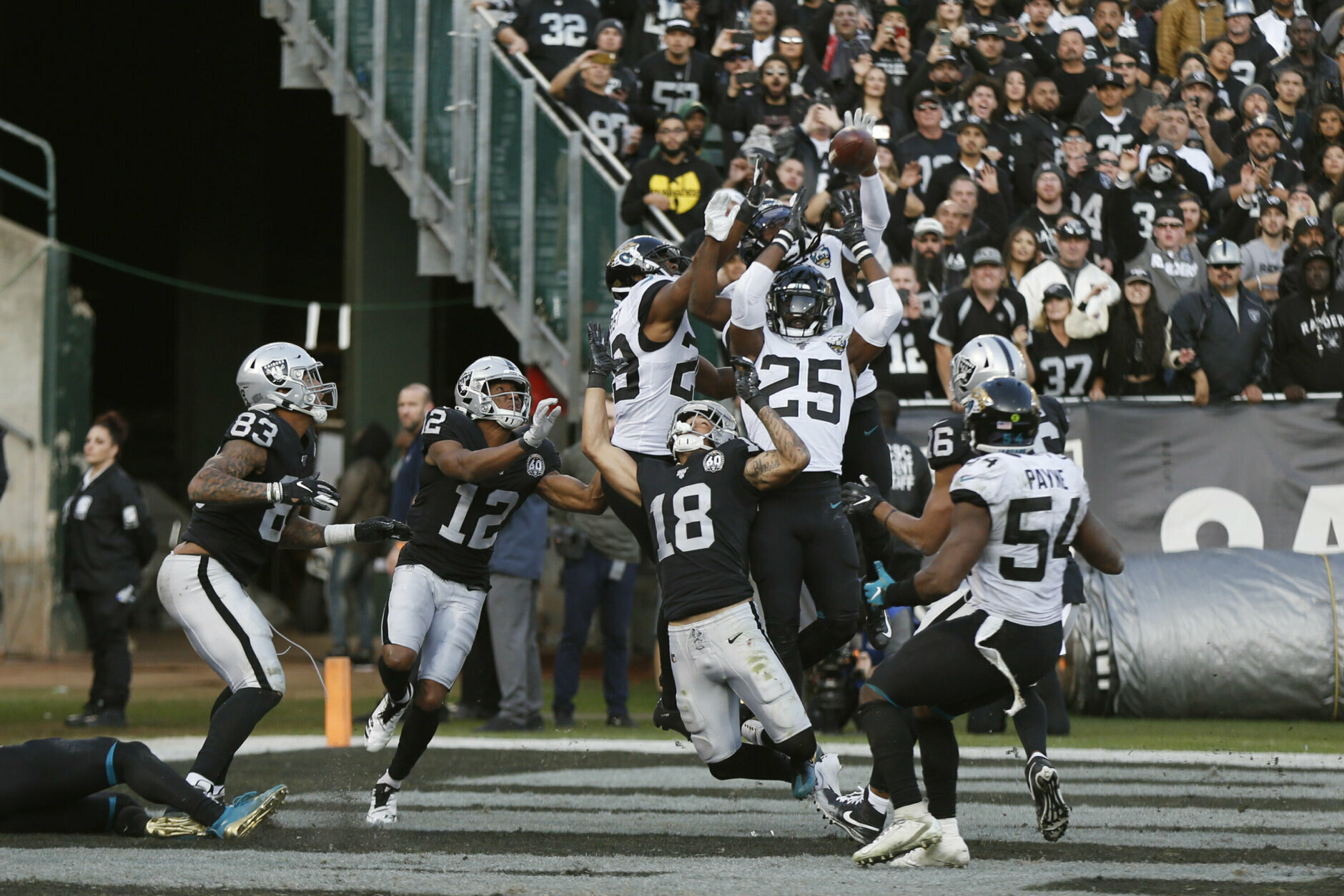 7/16
Players go up for a pass thrown by Oakland Raiders quarterback Derek Carr late in the second half of an NFL football game between the Raiders and the Jacksonville Jaguars in Oakland, Calif., Sunday, Dec. 15, 2019. Jacksonville won the game 20-16. (AP/D. Ross Cameron)

The Sea of Hands didn’t happen in Oakland one last time, as the Raiders lost their final game at Oakland Coliseum thanks to Gardner Minshew’s late-game heroics amid a sea of fingers. The Silver and Black’s Bay Area bye-bye may have sucked but Minshew Magic certainly does not. 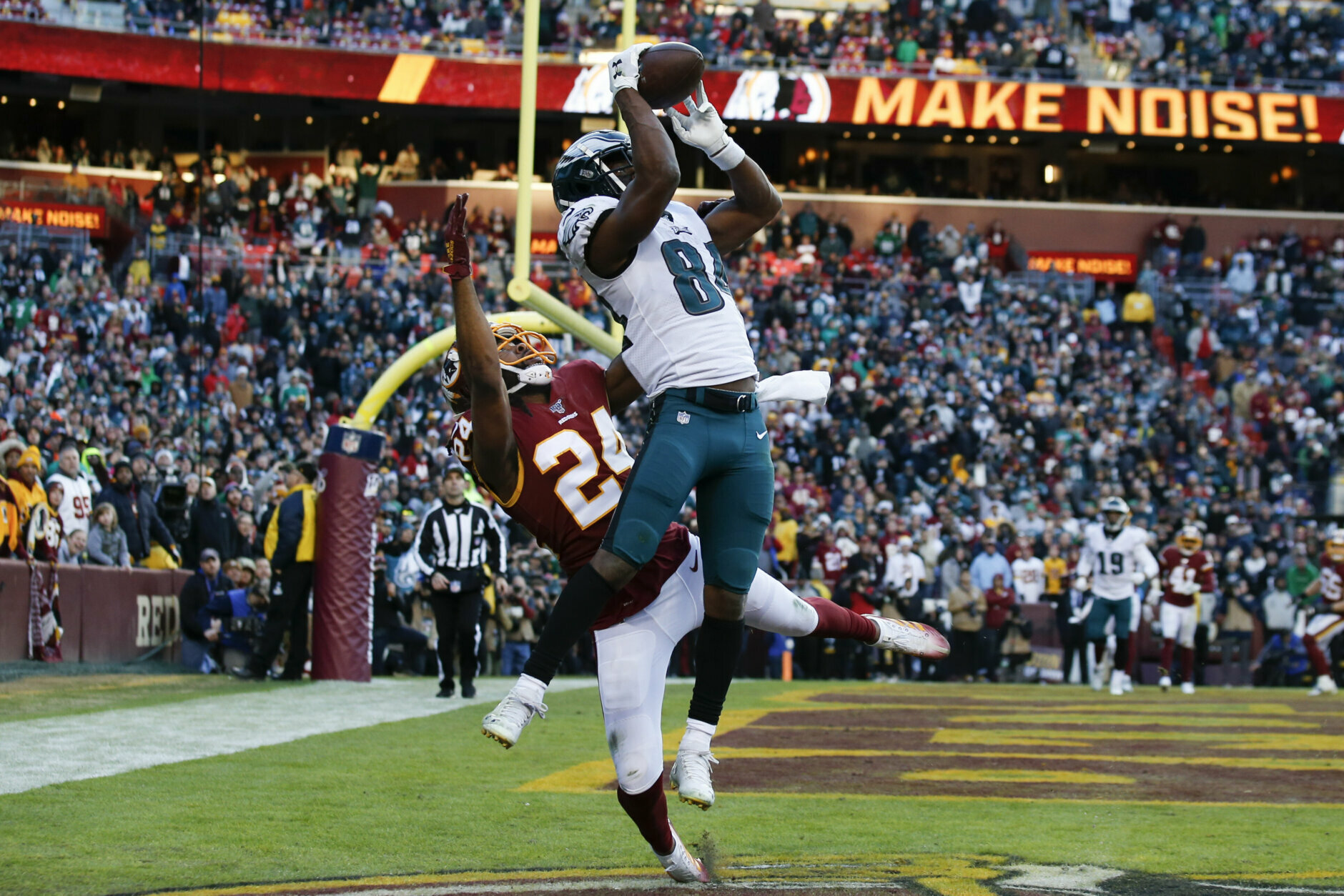 Boy, where do I start? Adrian Peterson solidifying his case for the Hall of Fame. Dwayne Haskins and Terry McLaurin having breakout games with Urban Meyer in the owner’s box. The bad beat to end all bad beats. But while people laud the Redskins for playing the Eagles close in a game that meant everything to Philly and nothing to Old D.C., I’m calling out Josh Norman — the league’s highest-paid corner finally on the field after weeks on the bench — for getting torched for the game-winning touchdown by a guy cut six times and then talking nonsense in the aftermath. If I’m Meyer, I’m not touching this gig and if I’m the NFL, I’m not touching Meyer. 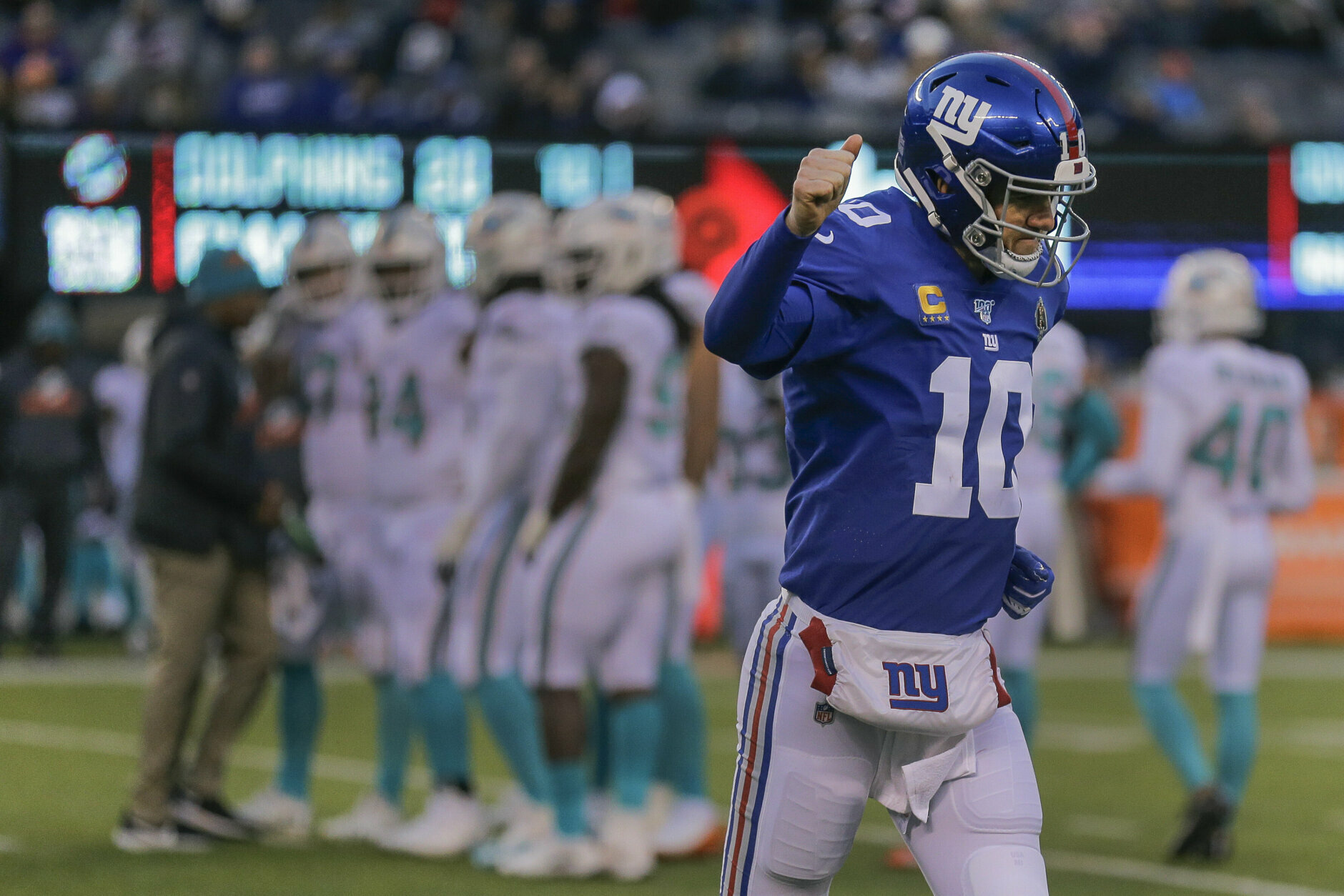 His three picks aside, Eli’s farewell was a helluva send-off for a guy with a career .500 record and was really the catalyst for only one of the two Super Bowl runs he was a part of. Yeah, I said it. 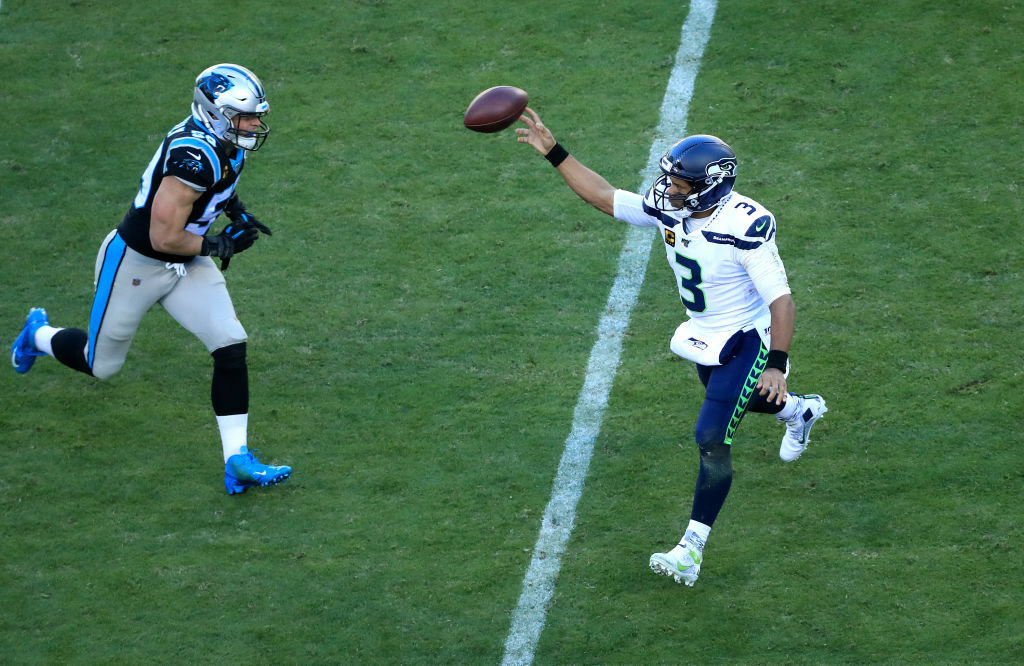 10/16
CHARLOTTE, NORTH CAROLINA — DEC. 15: Luke Kuechly #59 of the Carolina Panthers goes after Russell Wilson #3 of the Seattle Seahawks during their game at Bank of America Stadium on December 15, 2019 in Charlotte, North Carolina. (Getty Images/Streeter Lecka)

Seattle went from falling off their high horse to becoming the first team in 41 years to win 10 one-score games in a season en route to their first 11-win season since their 2014 Super Bowl campaign. If the Seahawks lock up homefield advantage, they’re almost certain to make a return trip. 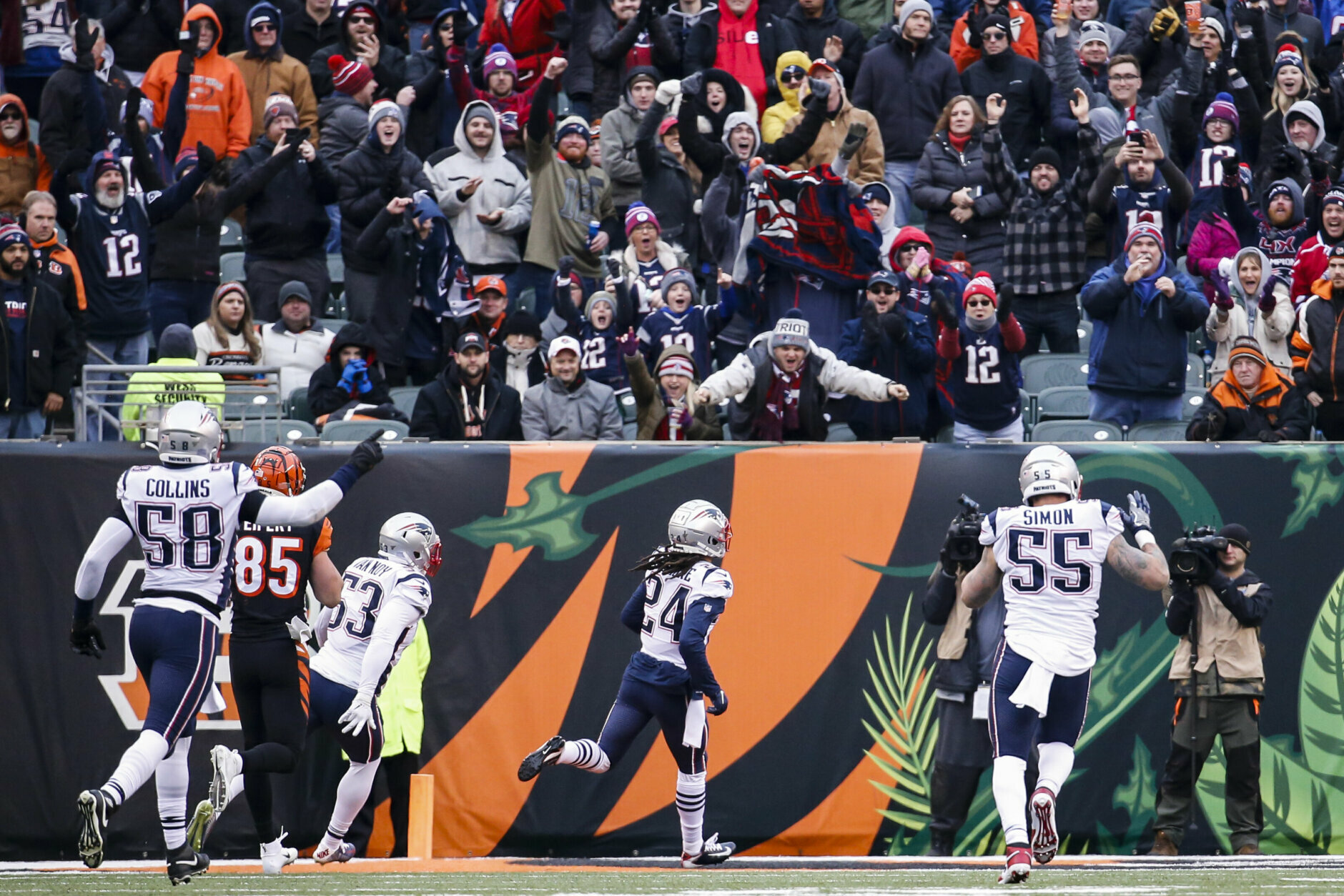 11/16
New England Patriots cornerback Stephon Gilmore (24) runs in a touchdown off an interception in the second half of an NFL football game against the Cincinnati Bengals, Sunday, Dec. 15, 2019, in Cincinnati. (AP/Frank Victores)

New England certainly didn’t need to cheat to beat Cincinnati, posting their highest scoring output since Week 6 and clinching a playoff berth for the 11th straight season. But of course, that won’t stop the NFL from dragging the Patriots through another ridiculously-named investigation into something blown completely out of proportion. 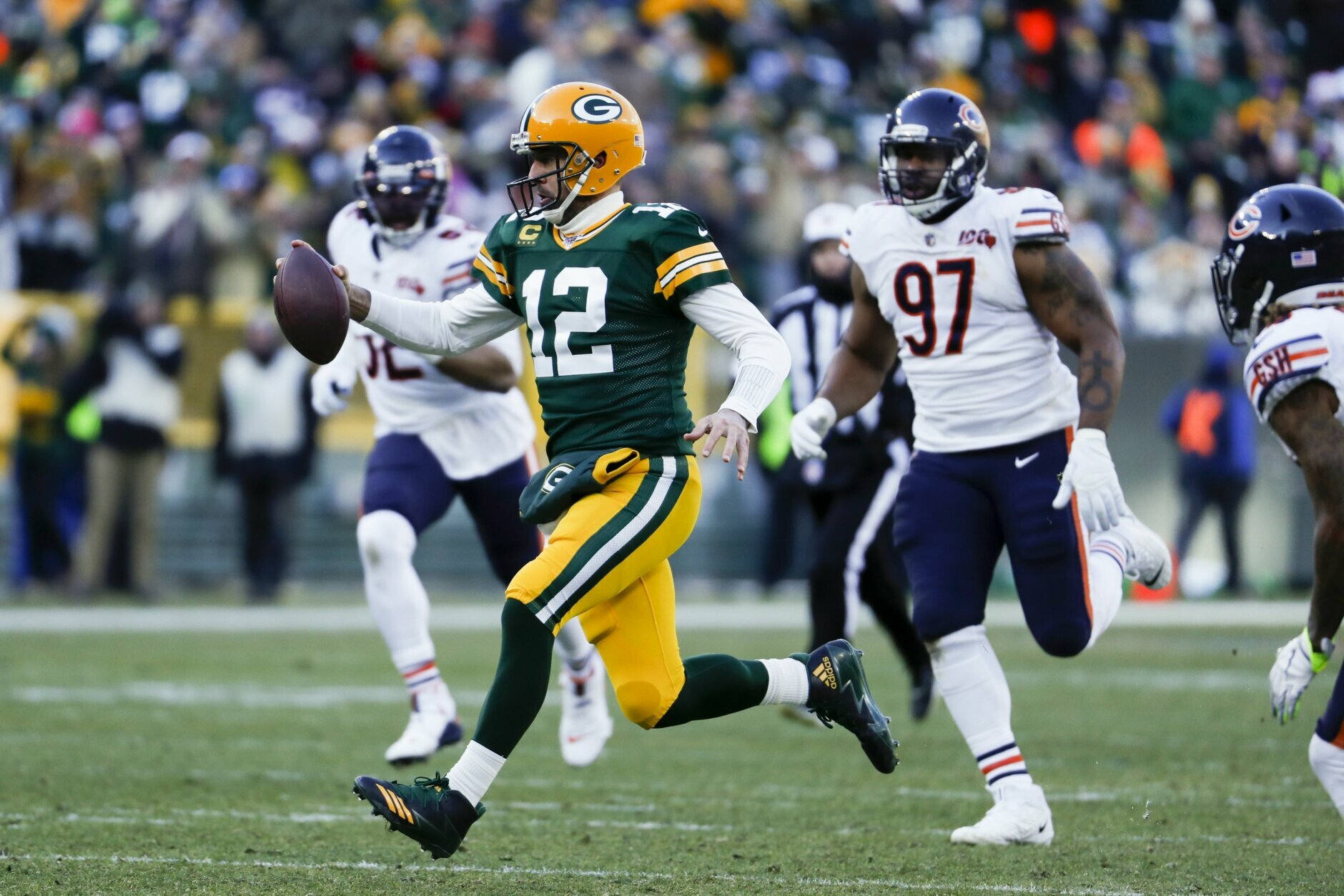 12/16
Green Bay Packers’ Aaron Rodgers runs for a first down during the second half of an NFL football game against the Chicago Bears Sunday, Dec. 15, 2019, in Green Bay, Wis. (AP/Matt Ludtke)

In the 200th meeting between these storied rivals, Green Bay clinched a playoff berth at Chicago’s expense, sweeping the regular season series for seventh time in the last 11 seasons and 15th time in the last 26 years. The Bears have a lot to answer for. 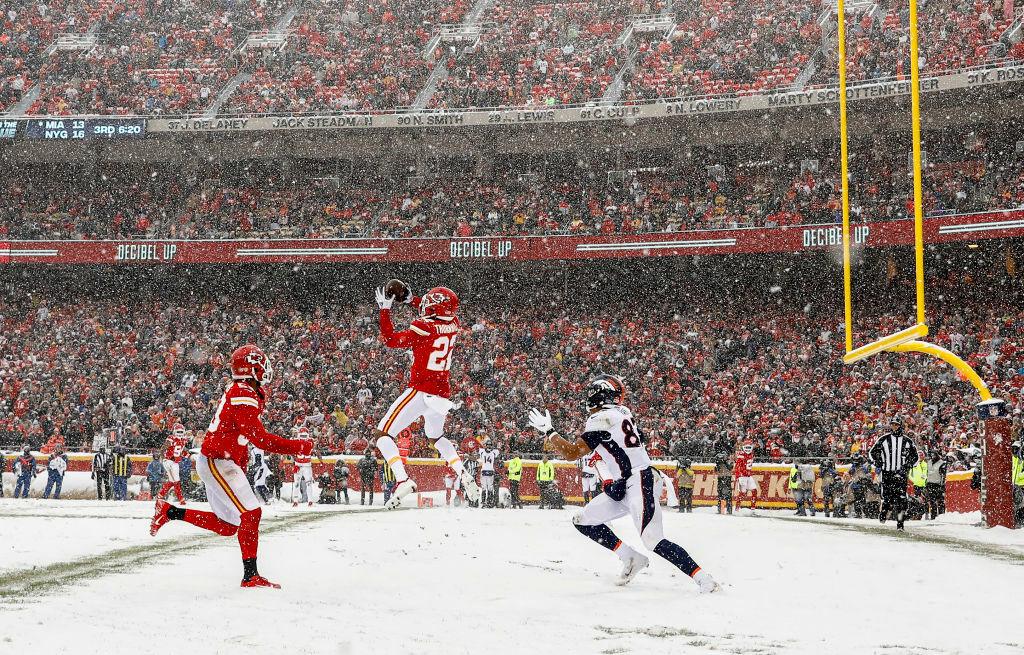 Drew Lock’s homecoming had him seeing red … red jerseys pummeling him in Kansas City’s best defensive performance of the season to sweep Denver by a combined score of 53-9 and keep the Chiefs in position to grab the 2-seed in the AFC. Considering how much Patrick Mahomes likes to play in the snow, that’ll mean something. 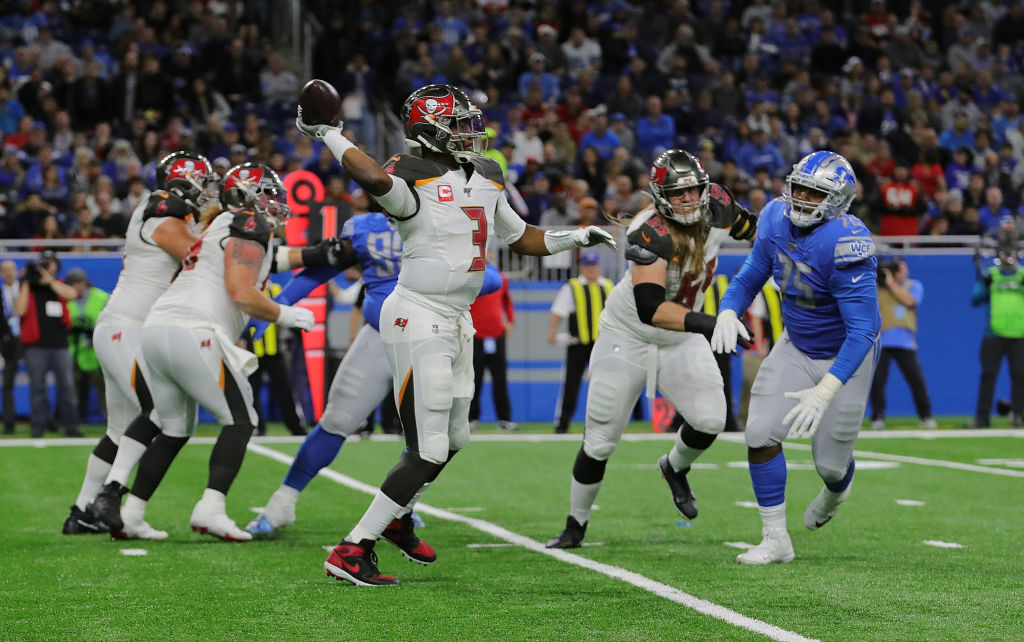 14/16
DETROIT, MI — DEC. 15: Jameis Winston #3 of the Tampa Bay Buccaneers drops back to pass during the first quarter of the game against the Detroit Lions at Ford Field on Dec. 15, 2019 in Detroit, Michigan. Tampa Bay defeated Detroit 38-17. (Getty Images/Leon Halip)

In this week’s reminder that the “Football is a game of inches” cliché is absolutely true, an entire division might be determined by this fluke play. The Week 17 rematch in Tennessee is gonna be great — especially if Mike Vrabel is still in a bad mood. 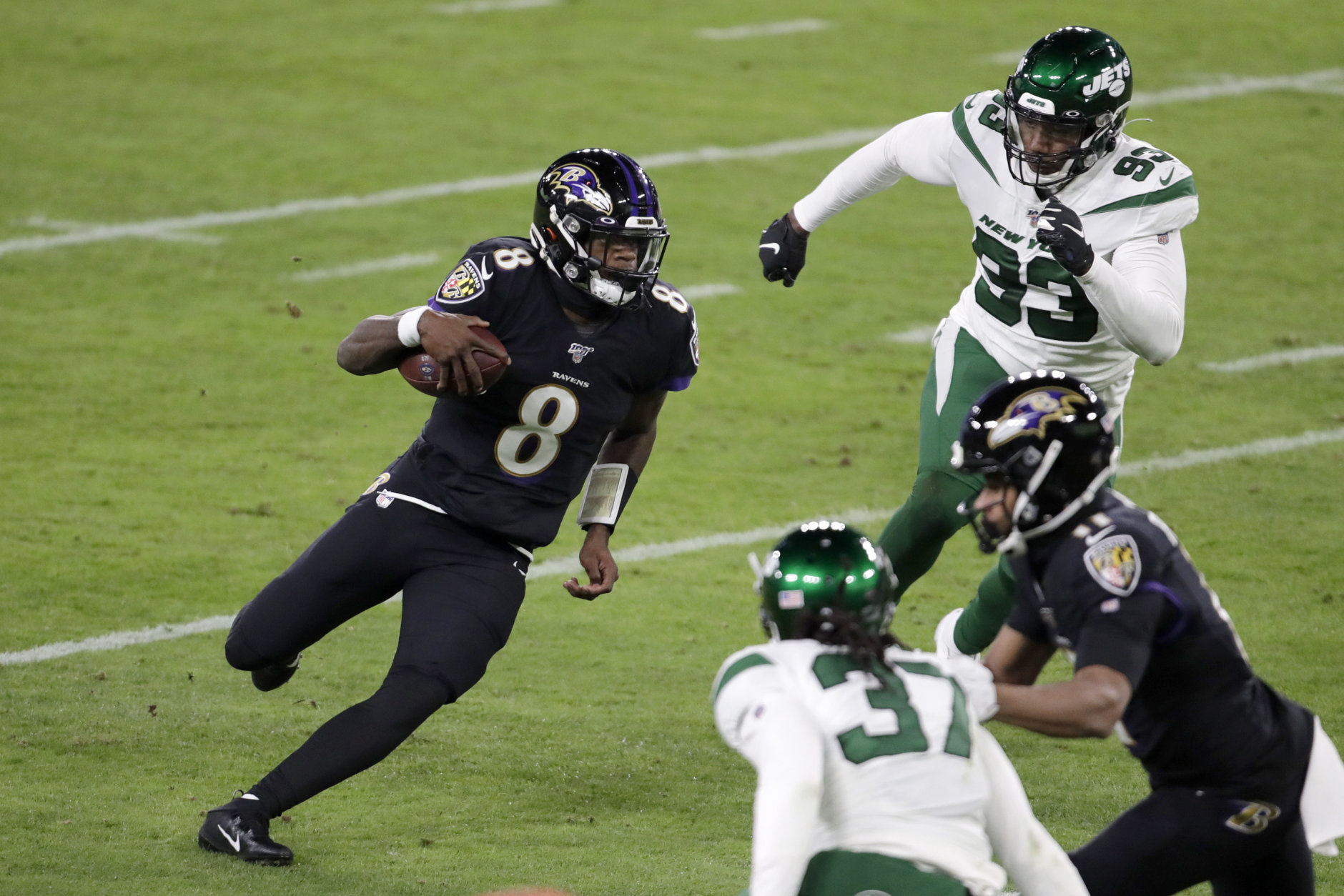 16/16
Baltimore Ravens quarterback Lamar Jackson scrambles against the New York Jets during the first half of an NFL football game, Thursday, Dec. 12, 2019, in Baltimore. On the run, Jackson broke the single season record for most rush yards by a quarterback in NFL history. (AP/Julio Cortez)

In the last Thursday night game of the season, Lamar Jackson made what figures to be his closing statement for MVP by leading Baltimore to back-to-back AFC North titles with his third 5-TD performance of the season, and oh by the way, set the new single-season rushing record by a QB. No matter what Tom Brady tweets, he can’t catch Jackson and the Ravens — literally or figuratively.