If you think the late-season playoff push is interesting, wait’ll you see how CliffsNotes, Dodgeball and lost baggage tie into the NFL Week 14 Recap.

The first half was about Eli Manning’s comeback but the second half belonged to Carson Wentz in Philadelphia’s biggest comeback in five years to keep pace with Dallas in the two-horse race for the NFC East title no one seems to want to win. I know the Giants are a dead team in the midst of a nine-game losing skid but this feels like the kind of victory that propels the injury-riddled Eagles to an unlikely — and largely undeserved — playoff run. 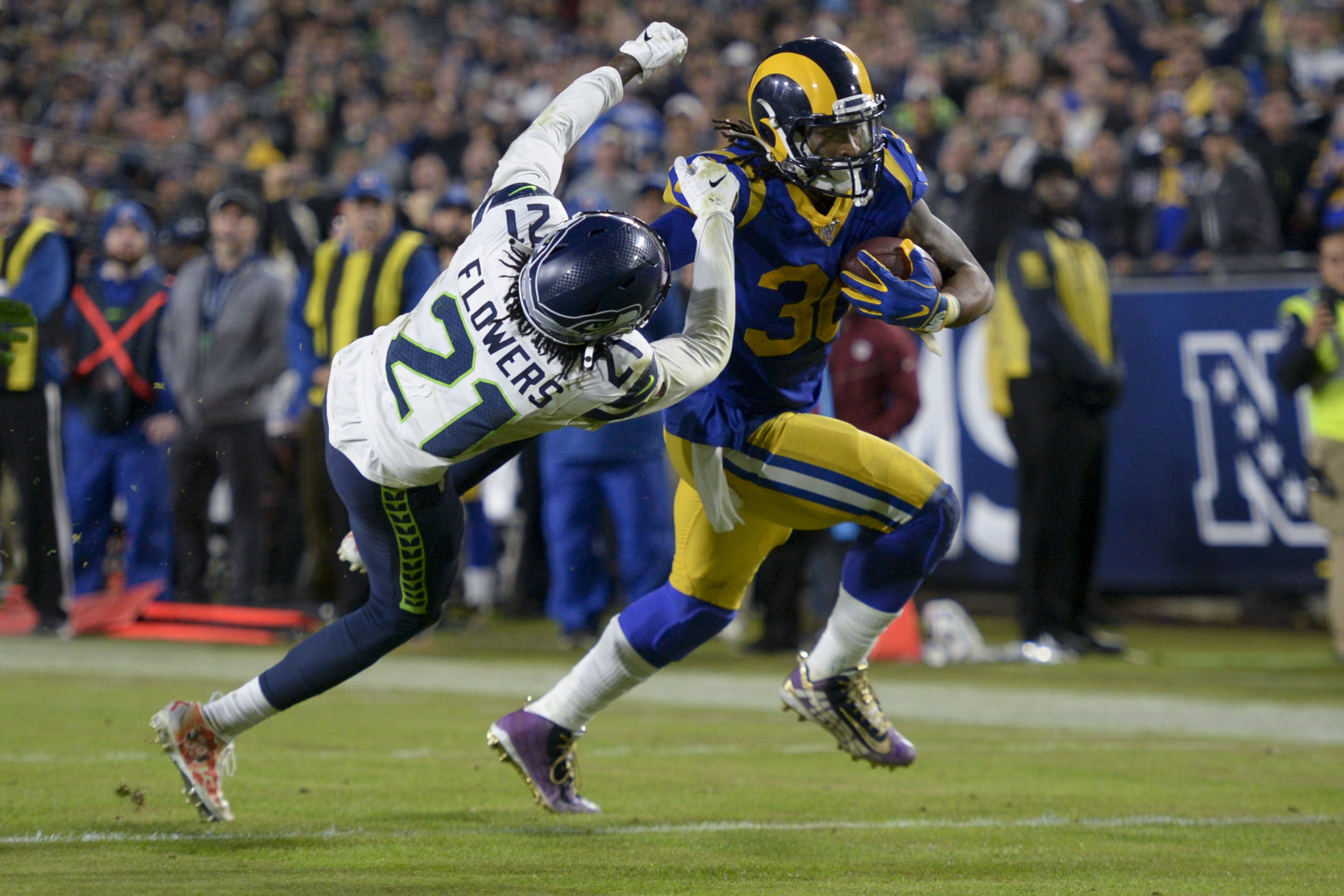 Clearly, Sean McVay is not an idiot. Todd Gurley again carried a full load and Jared Goff again had a good night for a Rams offense looking more like the team that represented the NFC in last season’s Super Bowl. L.A. is back to being must-see TV. 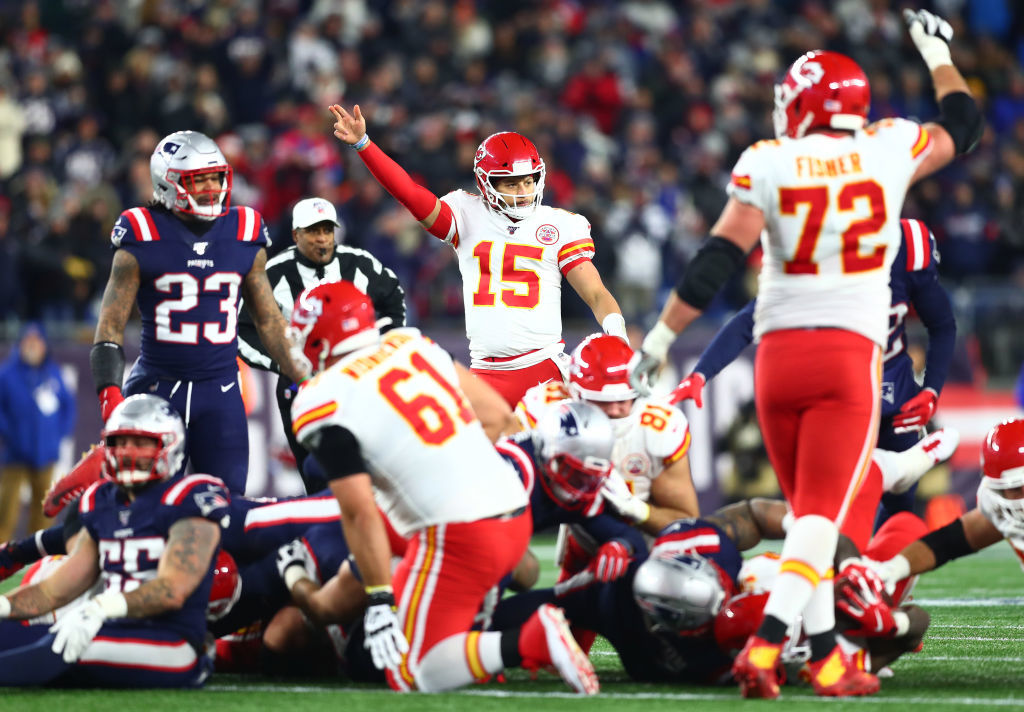 3/16
FOXBOROUGH, MASSACHUSETTS – DEC. 08: Patrick Mahomes (15) of the Kansas City Chiefs gestures for a first down during the second half against the New England Patriots in the game at Gillette Stadium on Dec. 08, 2019 in Foxborough, Massachusetts. (Getty Images/Adam Glanzman)

New England hadn’t trailed at home since Week 6 of last season, won 21 straight home games and the legendary Brady-Belichick tandem had never lost at home to an opposing QB under the age of 25. Patrick Mahomes wrecked all that and Kansas City not only wins its division, but still has a shot at leapfrogging the Patriots for a first round bye. Not bad for a team that almost had to forfeit over lost luggage. 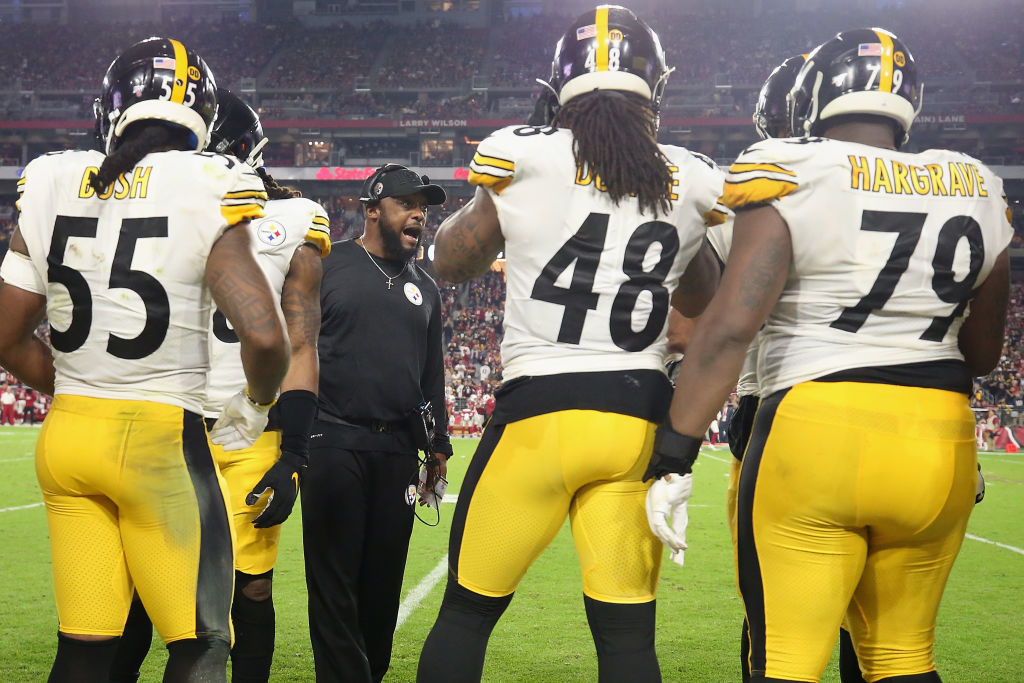 4/16
GLENDALE, ARIZONA – DEC. 08: Head coach Mike Tomlin of the Pittsburgh Steelers talks with teammates during the second half of the NFL game against the Arizona Cardinals at State Farm Stadium on Dec. 08, 2019 in Glendale, Arizona. The Steelers defeated the Cardinals 23-17. (Getty Images/Christian Petersen)

Considering Arizona is so bad their own players bet against them, any fun Steve Keim has building the Cardinals will be on Madden.

But the real-life Steelers are getting their best QB play from A Man Called Duck, and against all odds, maintain Mike Tomlin’s streak of non-losing seasons in Pittsburgh to remain in the driver’s seat for the last AFC wild card. Have I told you lately I think Tomlin should be Coach of the Year? 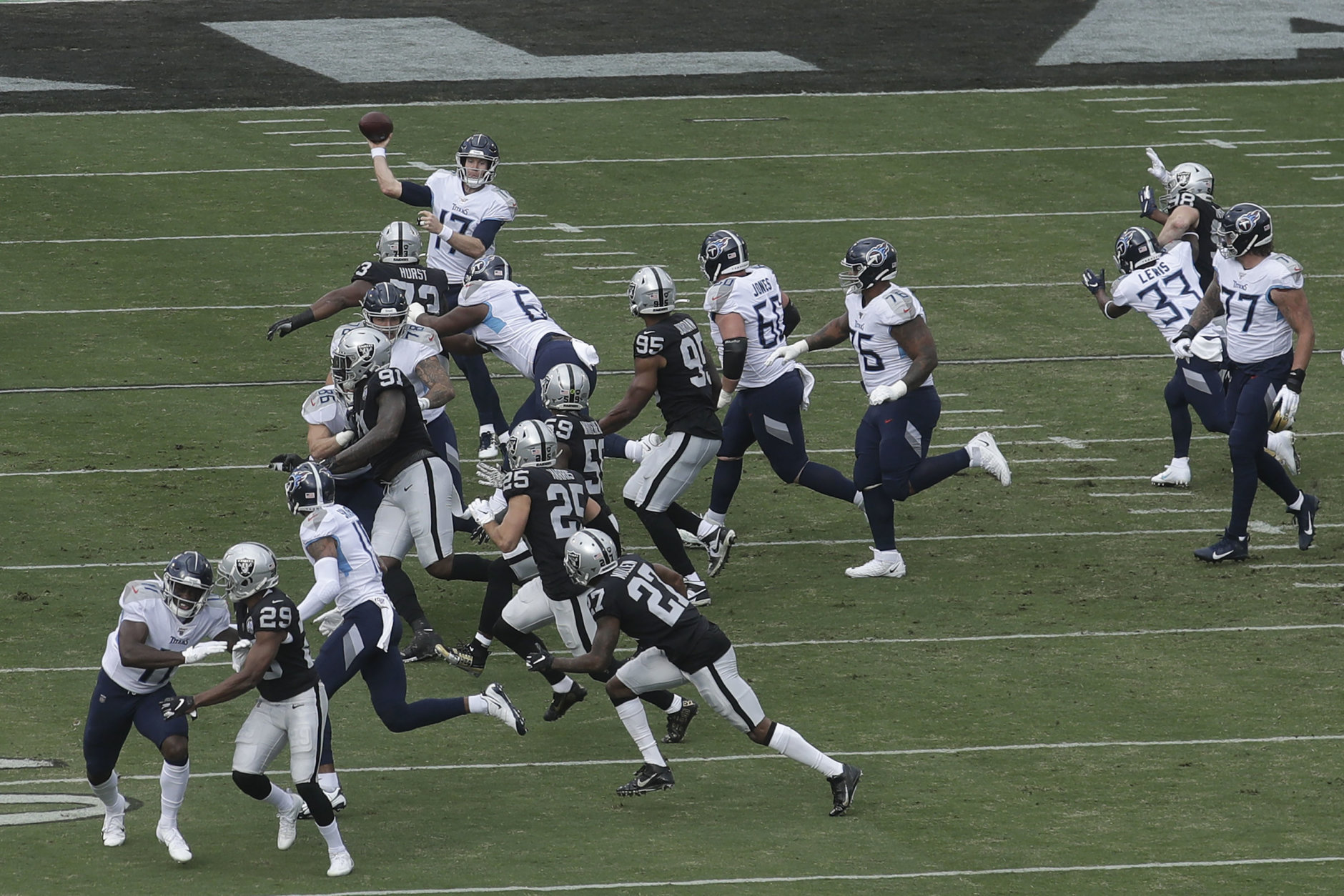 5/16
Tennessee Titans quarterback Ryan Tannehill (17) passes against the Oakland Raiders during the first half of an NFL football game in Oakland, Calif., Sunday, Dec. 8, 2019. (AP/Jeff Chiu)

In one of the most unpredictable turns of the season, Ryan Tannehill continued his tear to lead the Titans to their first 500-yard game since the move to Tennessee and into a tie with Houston atop the AFC South. The two teams play twice in the final three weeks, so barring another upset Texans loss (they play in Tampa Bay in Week 16), Tennessee may still have to pull off a sweep to win the division. 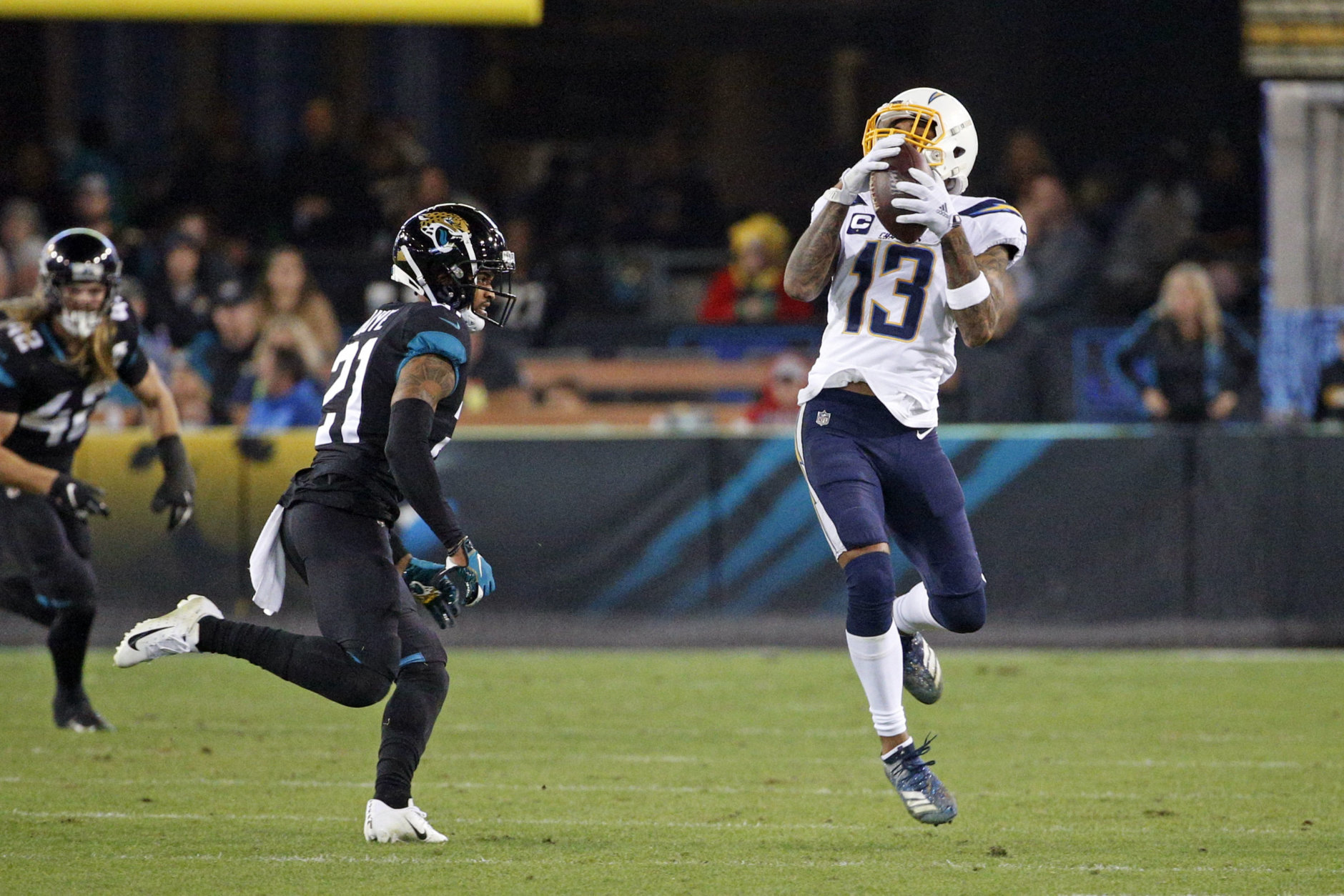 So how do you shake free of an epic run of late-game failures in close defeats? Blow out a listless Jacksonville team incapable of making a good choice at QB, of course!

CATCH OF THE YEAR MATERIAL FROM TERRY MCLAURIN 😮 #SCtop10

Thanks to playing in a historically inept division, the Redskins are officially eliminated from playoff contention much later than a 3-10 team should. But Terry McLaurin is still in the mix for Offensive Rookie of the Year. Wow. 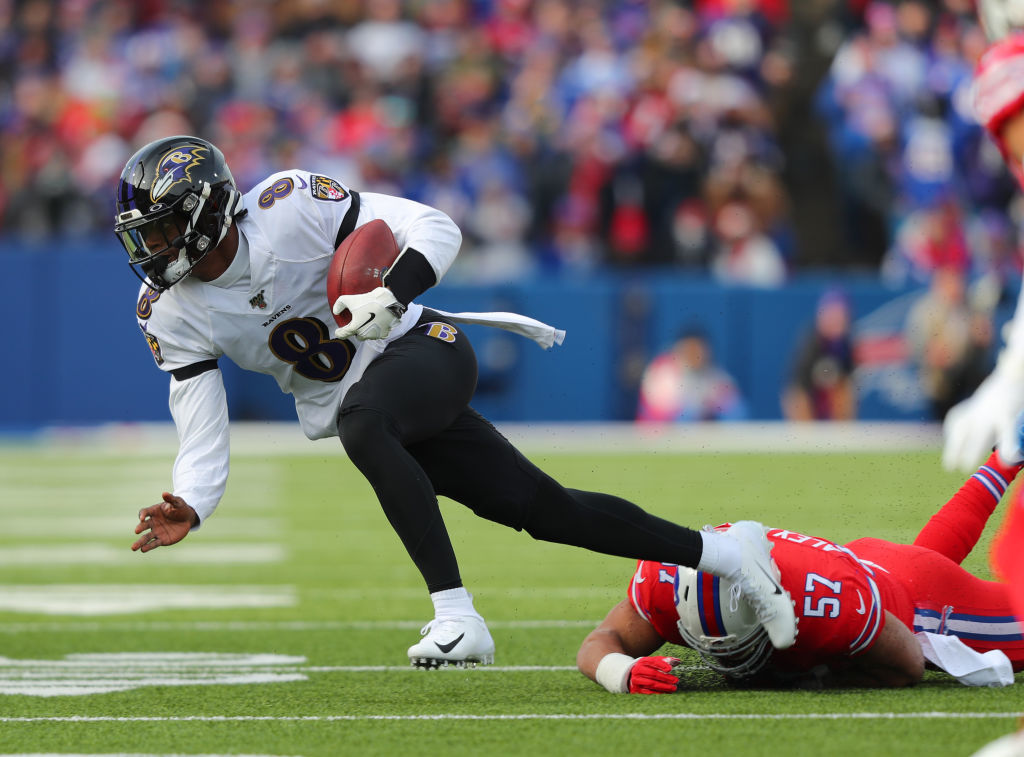 8/16
ORCHARD PARK, NY – DEC. 8: Lorenzo Alexander (57) of the Buffalo Bills dives to make a tackle on Lamar Jackson #8 of the Baltimore Ravens as he runs the ball during the first quarter at New Era Field on Dec. 8, 2019 in Orchard Park, New York. (Getty Images/Timothy T Ludwig)

In a rare matchup of mobile quarterbacks, Lamar Jackson fell short of Mike Vick’s single-season rushing record but joined him as the only QBs to rush for 1,000 yards in a season. If this dude’s “off day” still includes shattering another pair of ankles and throwing 3 TDs even when the opposition gets a gift cheat sheet, the heavens are proclaiming Baltimore is a team of destiny. 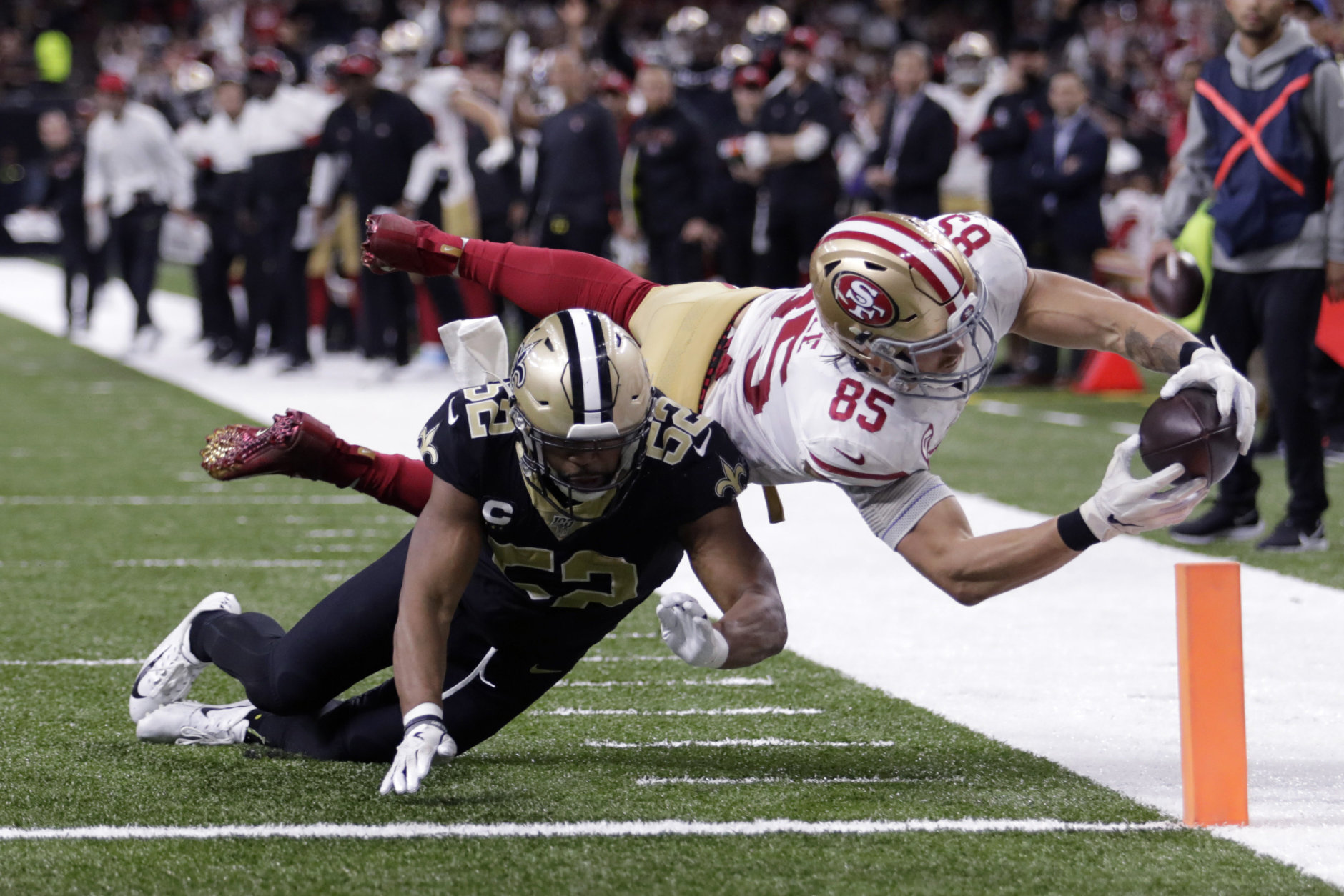 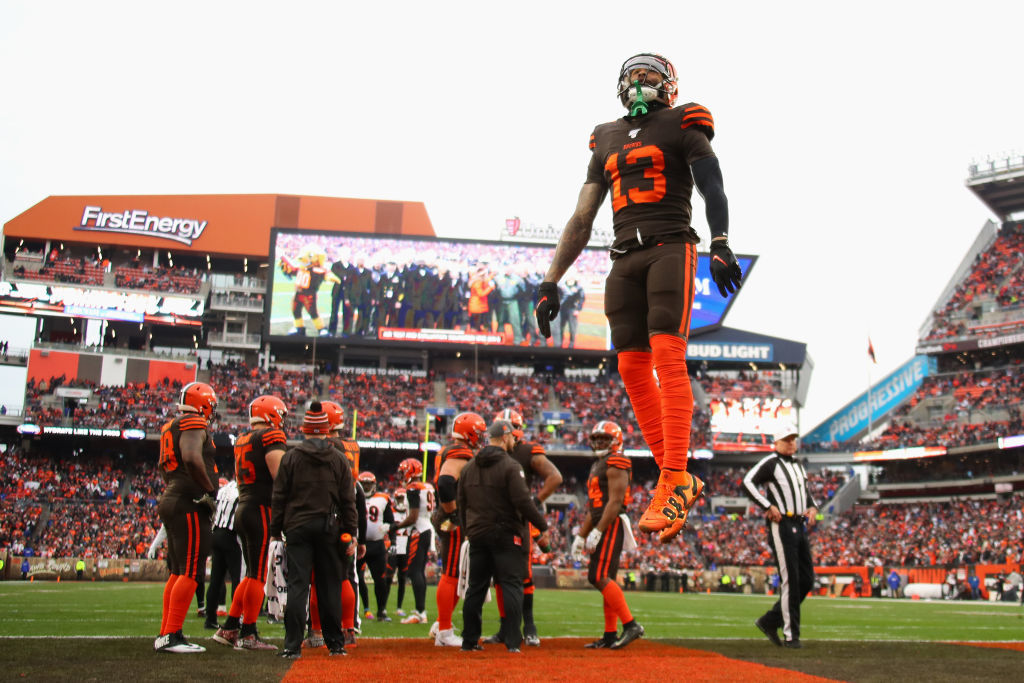 10/16
CLEVELAND, OHIO – DEC.08: Odell Beckham (13) of the Cleveland Browns jumps in the air during a stop in play while playing the Cincinnati Bengals at FirstEnergy Stadium on Dec. 08, 2019 in Cleveland, Ohio. (Getty Images/Gregory Shamus)

As has been the case in most of Cleveland’s rare wins this season, the tone surrounding this game made it feel more like a loss. Between the Redskin-esque cheap seats and the brewing Odell Beckham controversy, the Browns seem likely to blow this thing up in the offseason — again. 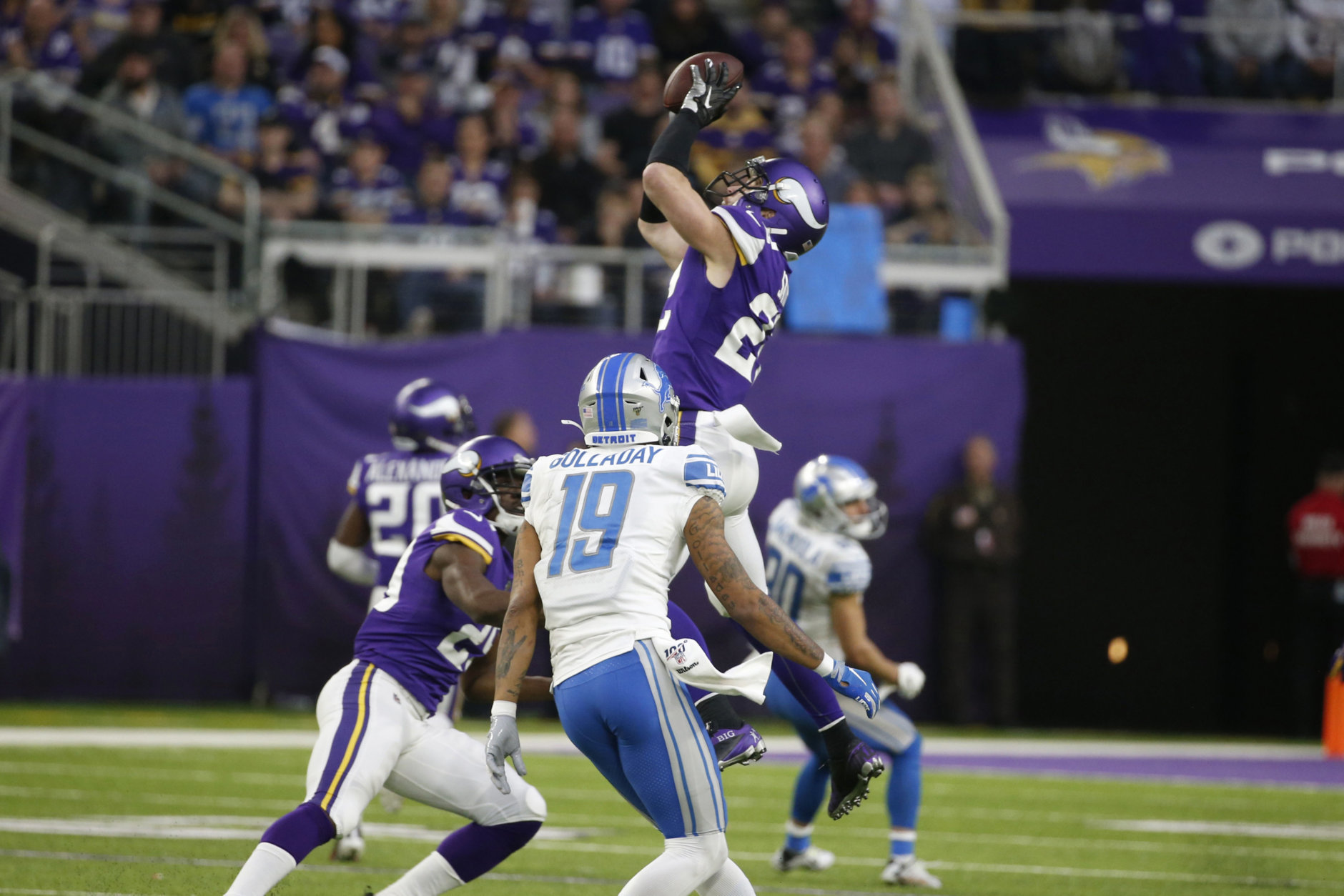 11/16
Minnesota Vikings free safety Harrison Smith (22) intercepts a pass during the second half of an NFL football game against the Detroit Lions, Sunday, Dec. 8, 2019, in Minneapolis. (AP/Bruce Kluckhohn)

Minnesota just missed grabbing its first shutout in two years but continue to squat on the final NFL wild card spot. With the Rams returning to form — and only a game out of the playoff picture — the Vikings can’t have a letdown in L.A. next week. 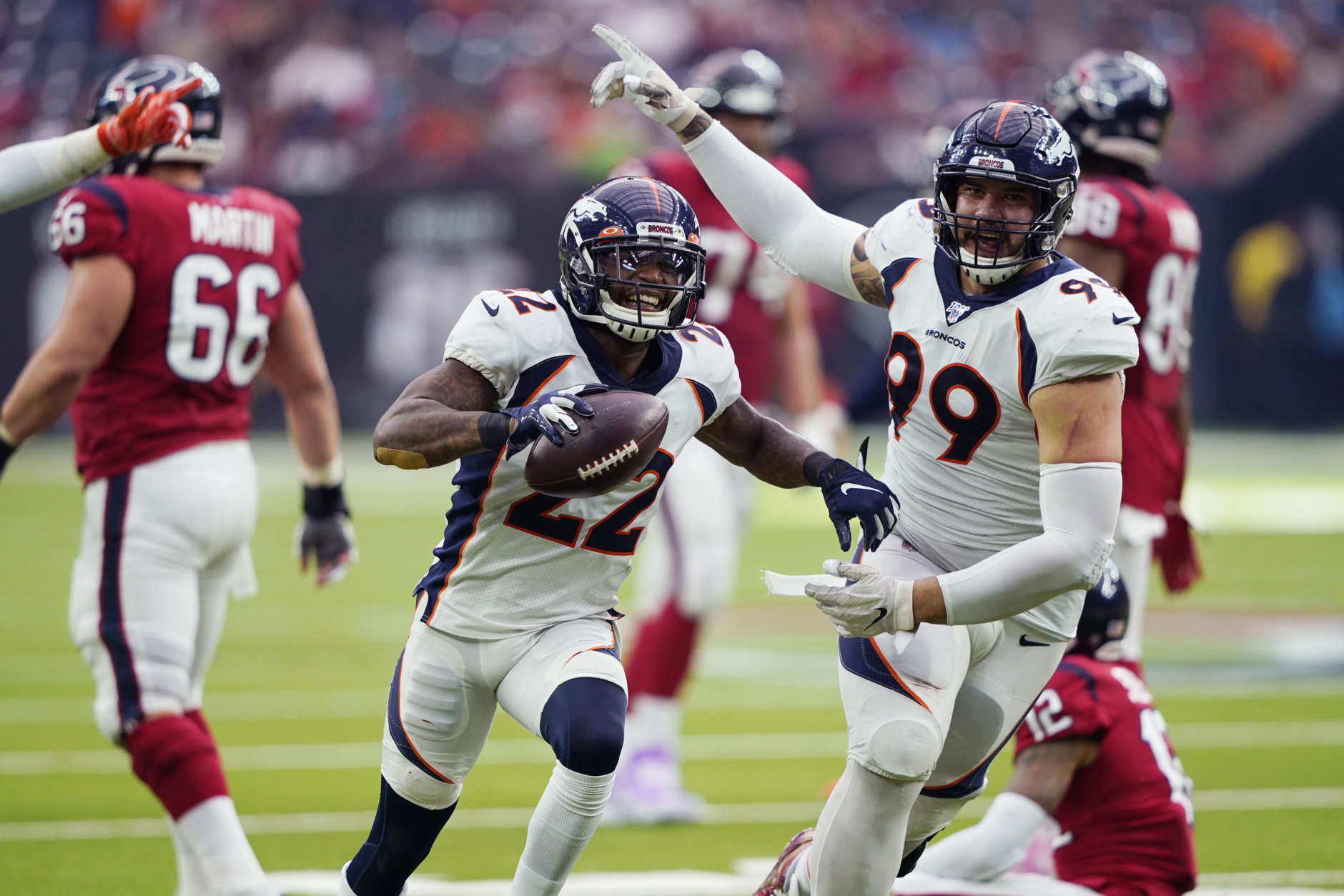 12/16
Denver Broncos strong safety Kareem Jackson (22) celebrates his interception against the Houston Texans during the second half of an NFL football game Sunday, Dec. 8, 2019, in Houston. (AP/David J. Phillip)

Houston has a problem. Rookie Drew Lock had a near-perfect passer rating in the first half of his second start and Kareem Jackson tormented his former team to deal the Texans a terrible loss that basically offsets last week’s quality win over the Patriots. If Houston fails to win their division, we’ll remember this loss a lot more than we’ll remember their linebackers’ weekly dress-up routine. 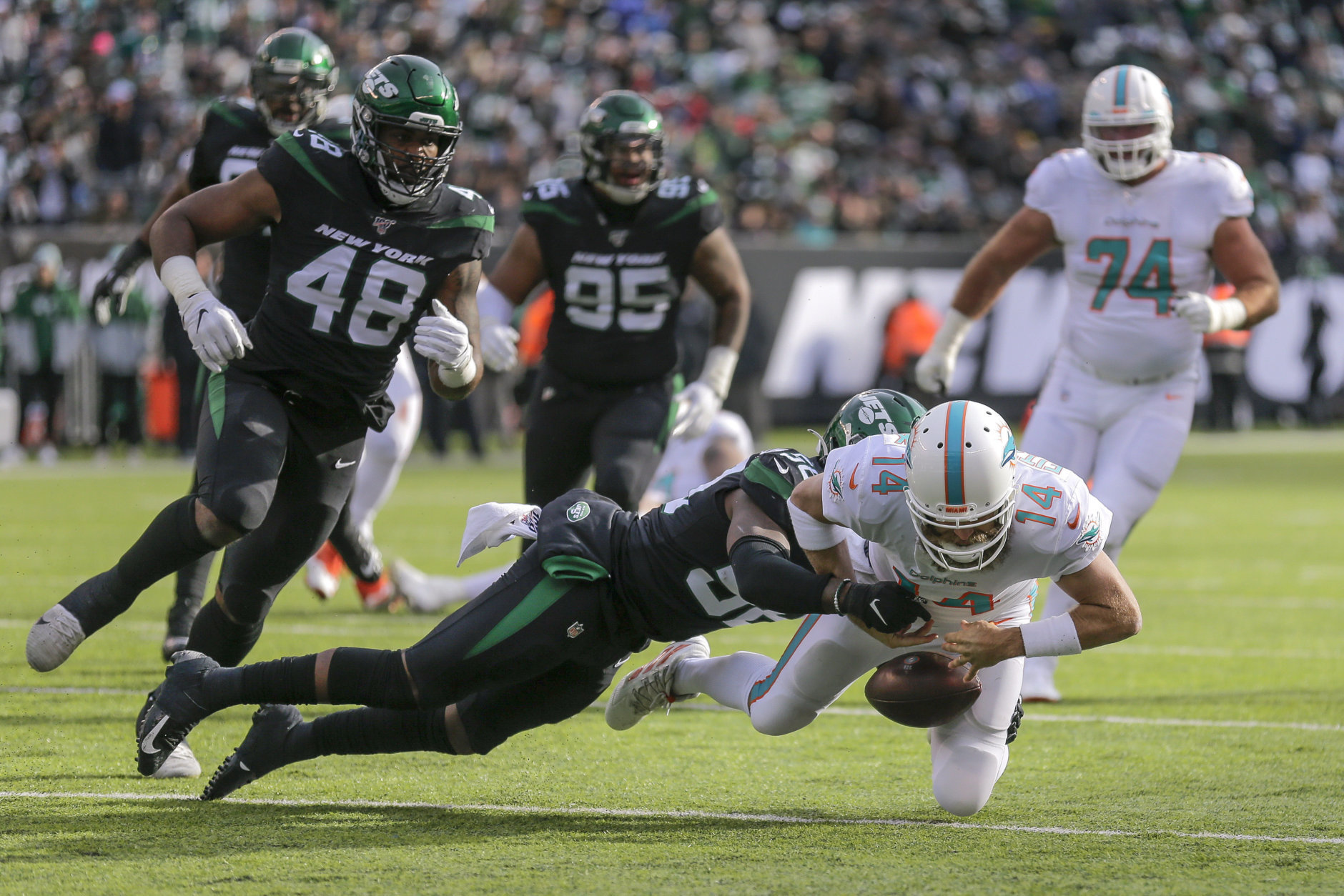 Miami is learning what seven other teams already learned the hard way: When Ryan Fitzpatrick feels good, that can only be good for the opposition.

What day is today? It's @LlamaDay 😏

Matt Ryan is the second-fastest player to reach 50,000 career passing yards and Olamide Zaccheaus helped. The rookie receiver out of Virginia’s 93-yard catch and run was the highlight of a game that really didn’t matter. 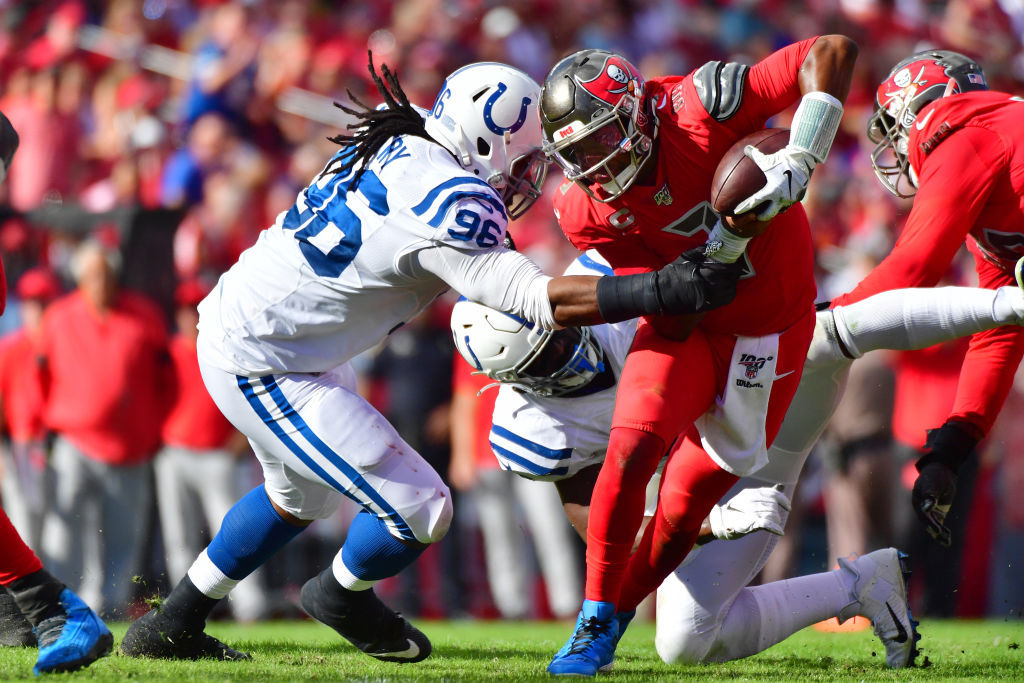 15/16
TAMPA, FLORIDA – DEC. 08: Jameis Winston (3) of the Tampa Bay Buccaneers breaks a tackle by Denico Autry (96) of the Indianapolis Colts during the second quarter of a football game at Raymond James Stadium on December 08, 2019 in Tampa, Florida. (Getty Images/Julio Aguilar)

Credit to Coach Kangol: He’s got Tampa believing they’re a playoff team and everyone not named Jameis Winston is playing like it. If the Bucs finally purge themselves of The Human Turnover, they might actually be good enough to eat some W’s in 2020. 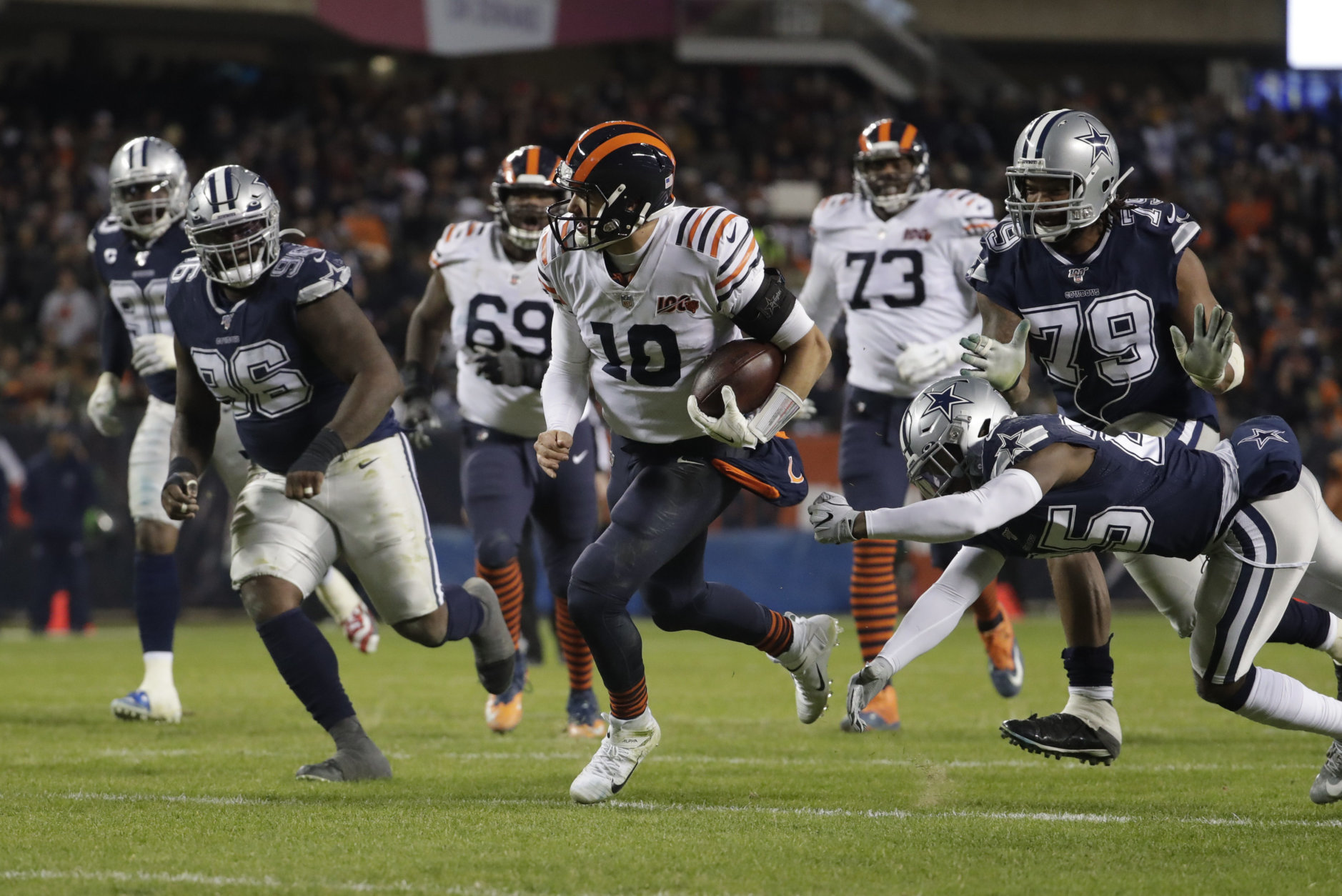 16/16
Chicago Bears quarterback Mitchell Trubisky (10) runs for a touchdown during the second half of an NFL football game against the Dallas Cowboys, Thursday, Dec. 5, 2019, in Chicago. (AP/Morry Gash)

In what amounted to a playoff game in Chicago, the battle between two of the NFL’s most rightfully criticized entities was won by Mitchell Trubisky. Meanwhile, Dallas — in the midst of one of the greatest underachieving seasons the league has ever seen — is finally wrapping its collective head around what I’ve known for years: Jason Garrett is more liability than championship head coach.