Can the Washington Football Team build off a successful first year with Ron Rivera at the helm? Can the Nats and Caps return to championship form? Will the Russell Westbrook trade bring the Wizards success? There’s a lot to wish for if you’re a Washington sports fan, but what we really wish for in 2021 isn’t necessarily something tangible.

It’s getting to the other side of the COVID-19 pandemic. Sports can bring an area together — look no further than the Caps’ Stanley Cup or Nationals’ World Series runs and celebrations — and the biggest thing we missed last year was togetherness.

The connection you get at an arena when the people in the seats next to you are talking about the game you’re watching, or in a bar while you’re watching all eight early NFL games wind down. The togetherness when you’re in a press box with other members of the media trying to do live hits and make deadlines. The intimacy you get when you’re interviewing athletes and coaches in person and not over a computer.

We’re likely a long way from returning to those days, but we’re hoping for more connection in the next 365 days in and out of the arenas. There’s still a lot to find out about the Wizards, who have started playing, as well as the Mystics, whose season start date is yet to be determined. But without further ado, here are the top storylines for D.C. sports heading into 2021. 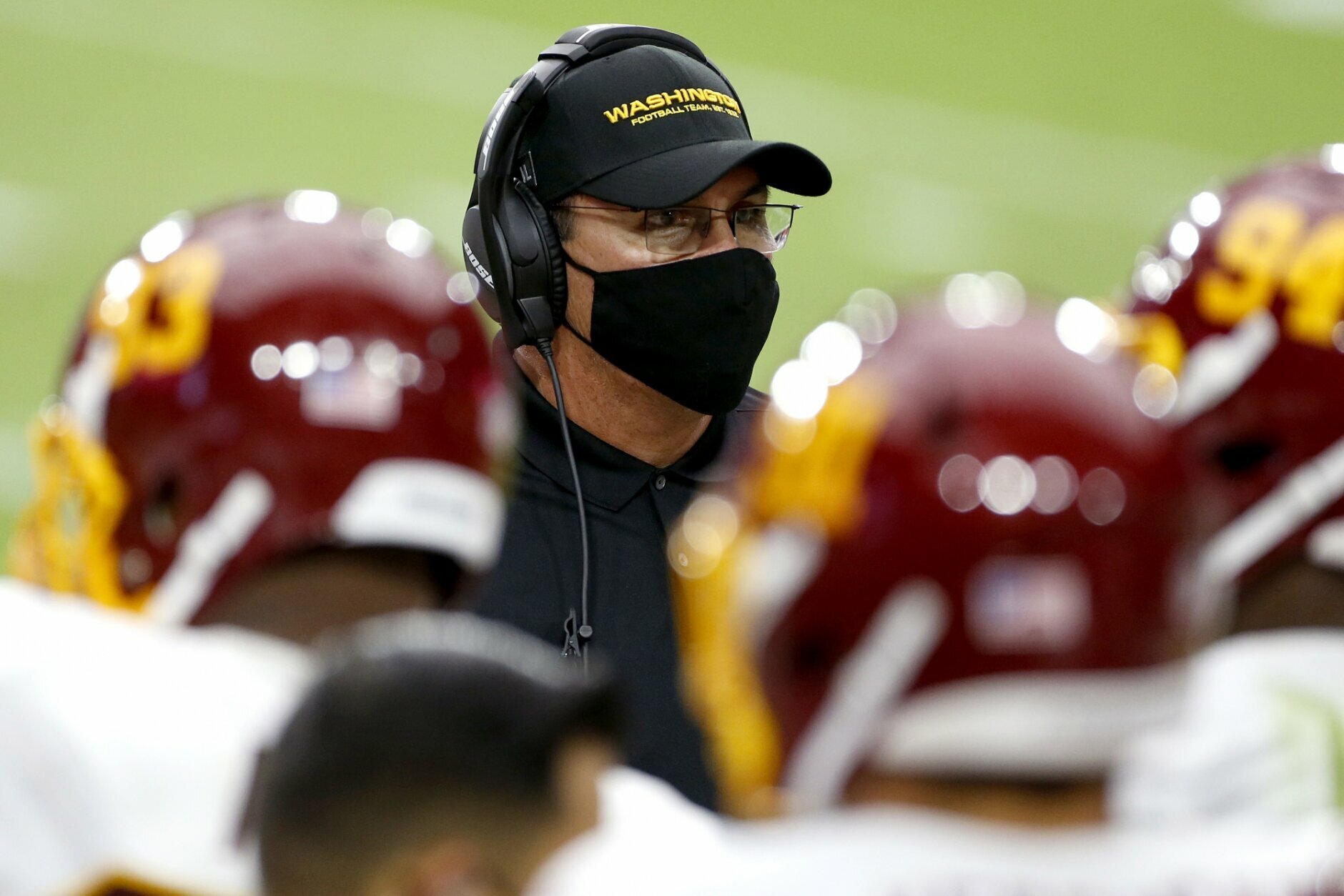 1/5
Washington Football Team head coach Ron Rivera talks with his players during the second half of an NFL football game against the Arizona Cardinals, Sunday, Sept. 20, 2020, in Glendale, Ariz. (AP Photo/Darryl Webb)

With a full offseason, how will Ron Rivera put the next building blocks in place?

The Washington Football Team coach came to Ashburn, Virginia, in January 2020, and what happened in the next 12 months feels like five years’ worth. The organization had to overcome a lot of obstacles, and much to the surprise of a lot people, they were very competitive on the field.

There is hope that the league will have a normal offseason and be able to conduct rookie camps and minicamps on the field — something Rivera was unable to do in year one.

Will the team also hire a general manager to work with Rivera?

Which of the veterans will be back?

Who will be the quarterback?

Lots of questions have to be answered, but I’m confident that Rivera will answer them correctly. 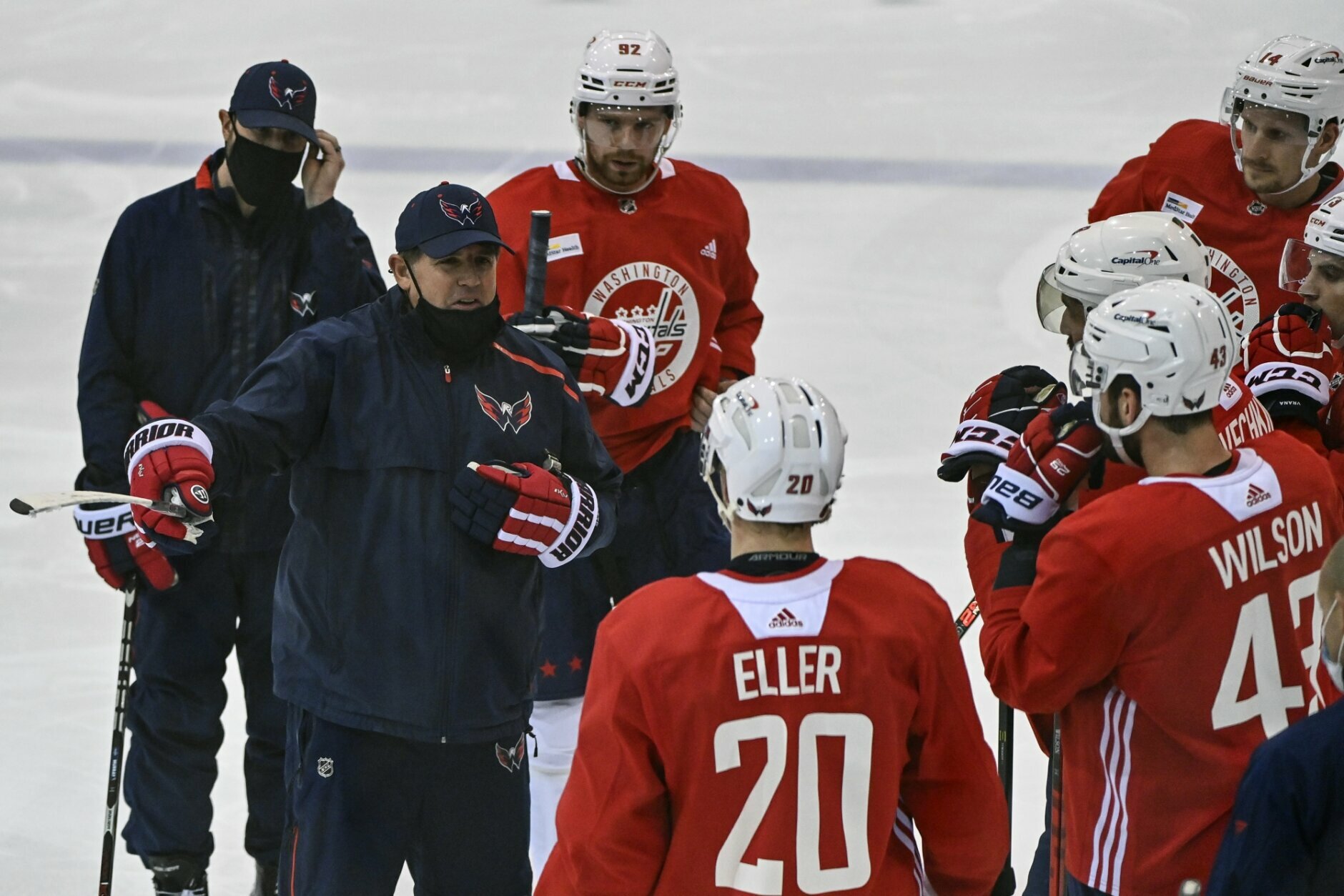 The Washington Capitals embark on the abbreviated 2021 NHL season Jan. 14 with the oldest roster in the league. The core of the lineup is still intact, and new coach Peter Laviolette has led three different teams to the Stanley Cup Finals, but a lot of questions loom over this team.

Even with John Carlson anchoring the defense, is the unit good enough? Will Evgeny Kuznetsov recapture his offensive magic from the Stanley Cup run? Can Alex Ovechkin and T.J. Oshie continue to play at a high level? Is 24-year-old Jakub Vrana ready to take the next step into superstar status?

And what’s going on in goal? The Caps lost Braden Holtby to free agency, acquired Henrik Lundqvist, only to see his season end before it started as the potential future Hall of Famer announced last month that he needed open heart surgery. That leaves Ilya Samsonov as the presumed starting goaltender for a team less than three years removed from hoisting the Stanley Cup. Craig Anderson was signed to a professional tryout agreement, and the 39-year-old is expected to compete with Vitek Vanecek and Pheonix Copley for the main backup role.

The Capitals have the maturity and experience to make another run, and making the postseason is the expectation not the hope. The Great 8 has mentioned he wants to finish his illustrious career playing in Russia; he can earn another Stanley Cup championship before that move if the Caps can stay physical, remain healthy and have a couple pucks bounce their way in the playoffs. 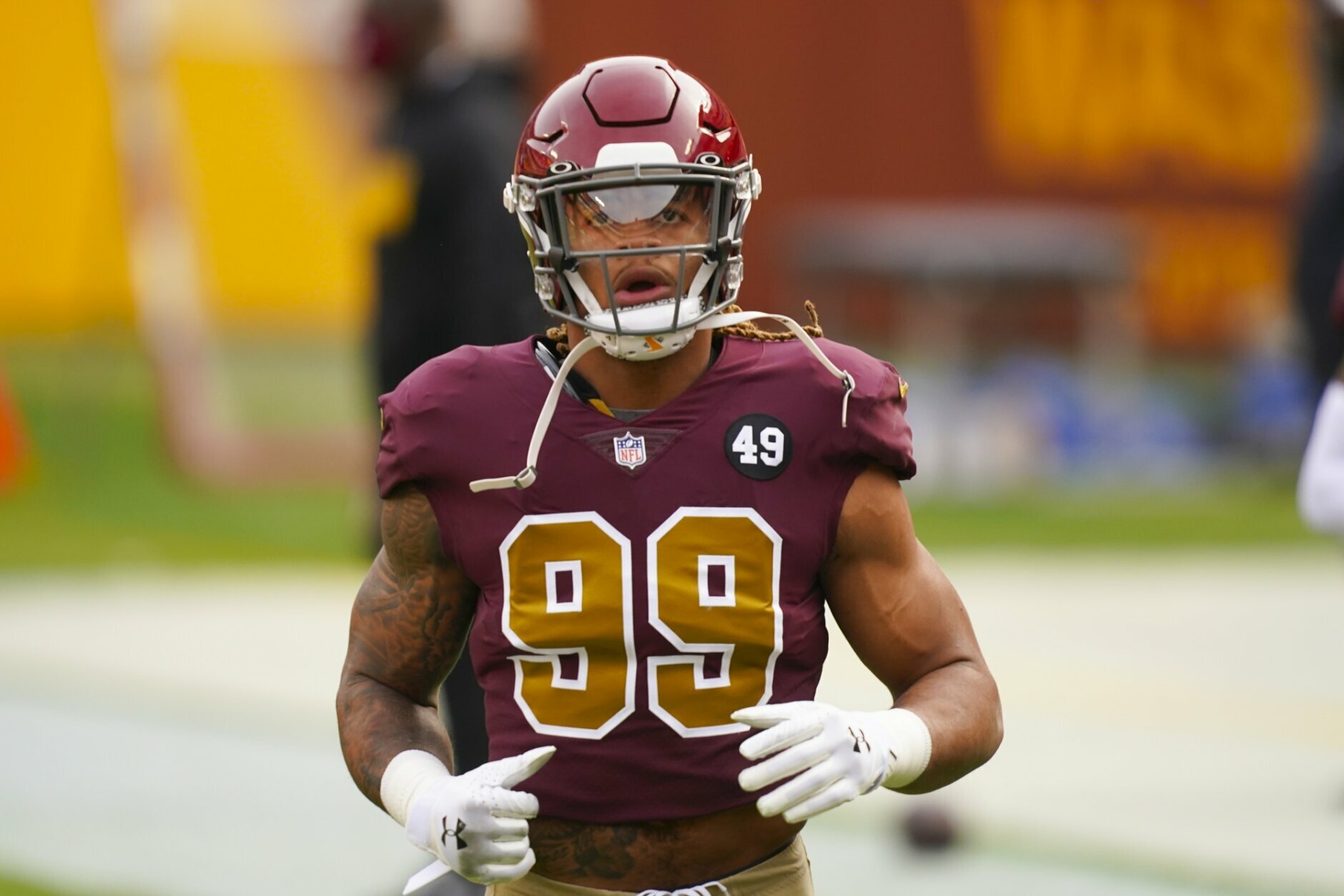 What will the Washington Football Team do in the NFL draft?

So far, it looks like Washington has struck (burgundy and) gold with Buckeyes Terry McLaurin and Chase Young in successive drafts – and, knowing Dan Snyder, Justin Fields’ performance in the Sugar Bowl will make him want to select a baller from Ohio State for the third straight season, despite the failed Dwayne Haskins experiment.

The Ron Rivera era is off to a promising start, but I’m eager to find out how much power he really has. 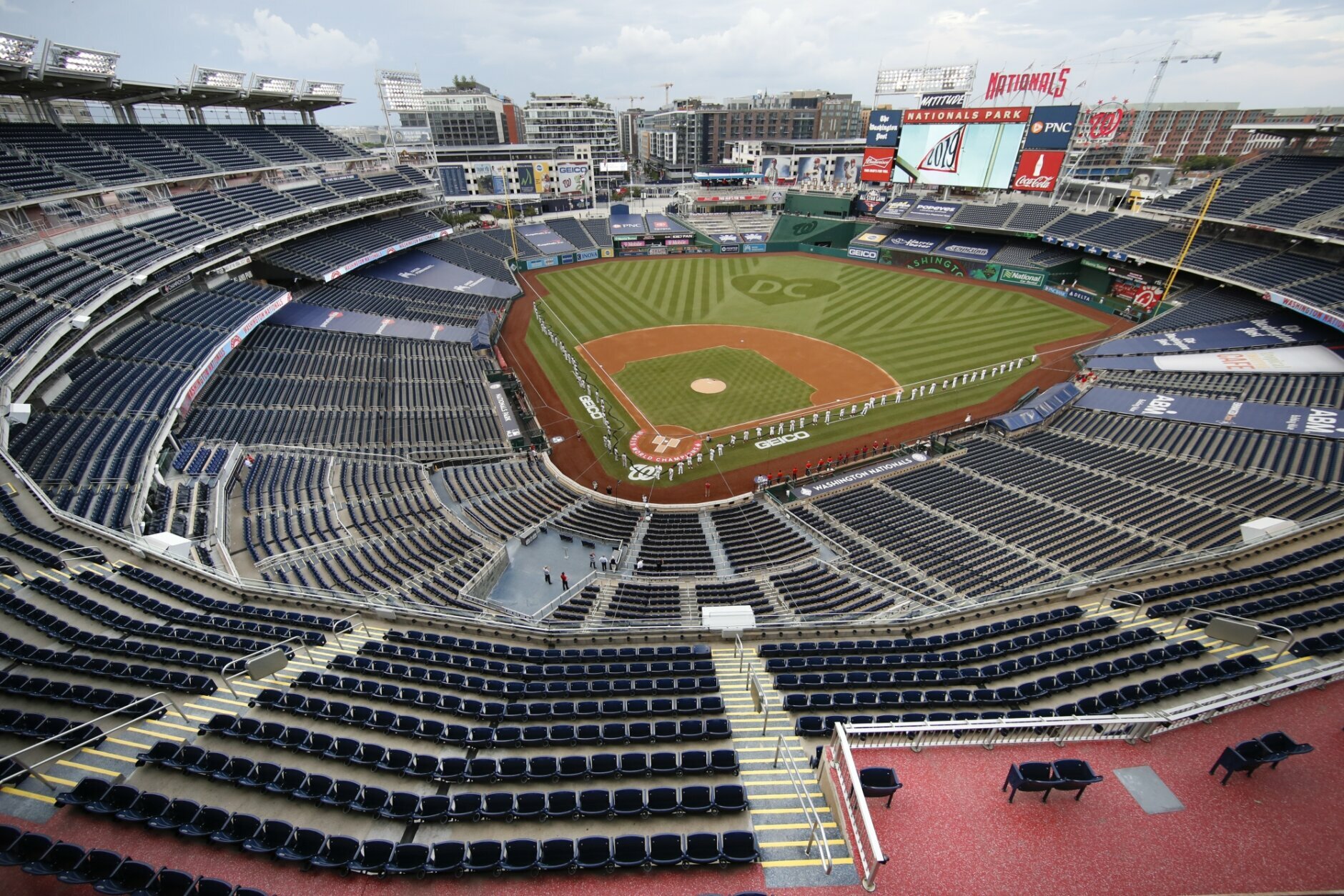 4/5
The New York Yankees and the Washington Nationals stand on the field before their opening day baseball game with no fans in the seats at Nationals Park, Thursday, July 23, 2020, in Washington. (AP Photo/Alex Brandon)

In 2021, we’ll likely get a genuine season where the Washington Nationals can “defend” their 2019 World Series title.

Last year, we were robbed of 102 regular season games (particularly damaging for a team that famously started slow the year they won it all), as well as all the trimmings that come with defending a title — the unveiling of the banner, a ring ceremony in front of 40,000-plus fans at the ballpark.

The start-and-stop Spring Training turned into a “summer sprint,” and you could say that the abrupt ramp-up caused pitching problems for a staff that finished 25th in ERA after being 13th the season before. Stephen Strasburg would toss a career-low five innings over two starts before he was shut down for the year, and that was just the tip of the iceberg.

The pandemic didn’t help the Nats at the plate either, as they had to go without their best bat in Juan Soto for the first eight games of the shortened season.

In addition, the group of Adam Eaton, Eric Thames, Victor Robles, Asdrubal Cabrera and Carter Kieboom each batted under .250.

Let’s see what this revamped roster (we’re looking at you, Josh Bell) and rested rotation (Scherzer/Strasburg/Corbin remain one intimidating Big Three) can do with a somewhat normal season schedule.

A chance to see what this bunch might do this year would be a great start for 2021. 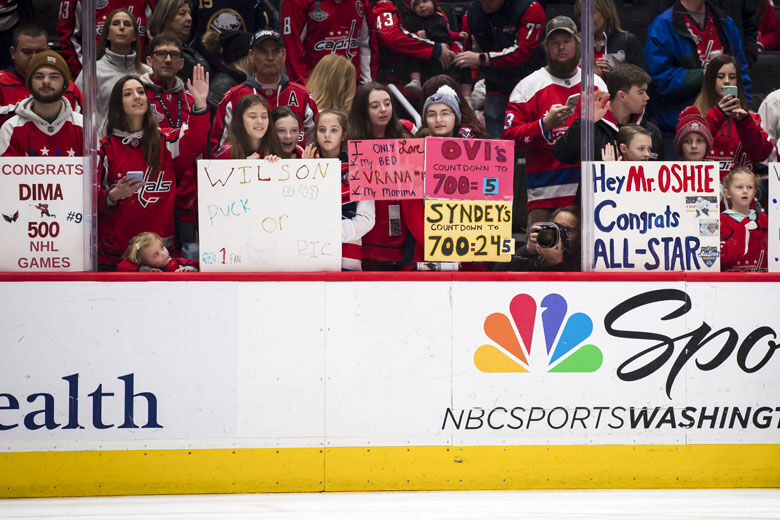 5/5
WASHINGTON, DC – FEBRUARY 02: Fans hold signs against the glass before the game between the Washington Capitals and the Pittsburgh Penguins at Capital One Arena on February 2, 2020 in Washington, DC. (Photo by Scott Taetsch/Getty Images)

I’ve dealt with the present and the ban on spectators at professional sports events. That’s why I yearn for the future and covering games with fans back in the stands.

When talking about fan attendance, I’m not just talking about limited capacities determined by social distancing. I’m talking about arenas and stadiums brimming to capacity, and I don’t care whether the fans are cheering or booing — as long as they’re not throwing things. I want that electric feeling again.

Read my complete column about the future of D.C. sports.