D.C. has become one of the country’s top food towns. Even still, a number of cuisines are underrepresented in the city’s dining rooms. That’s where food trucks come in, and years after peak popularity, a handful of immigrant entrepreneurs continue to drive D.C.’s food scene forward by offering many locals a taste of home. 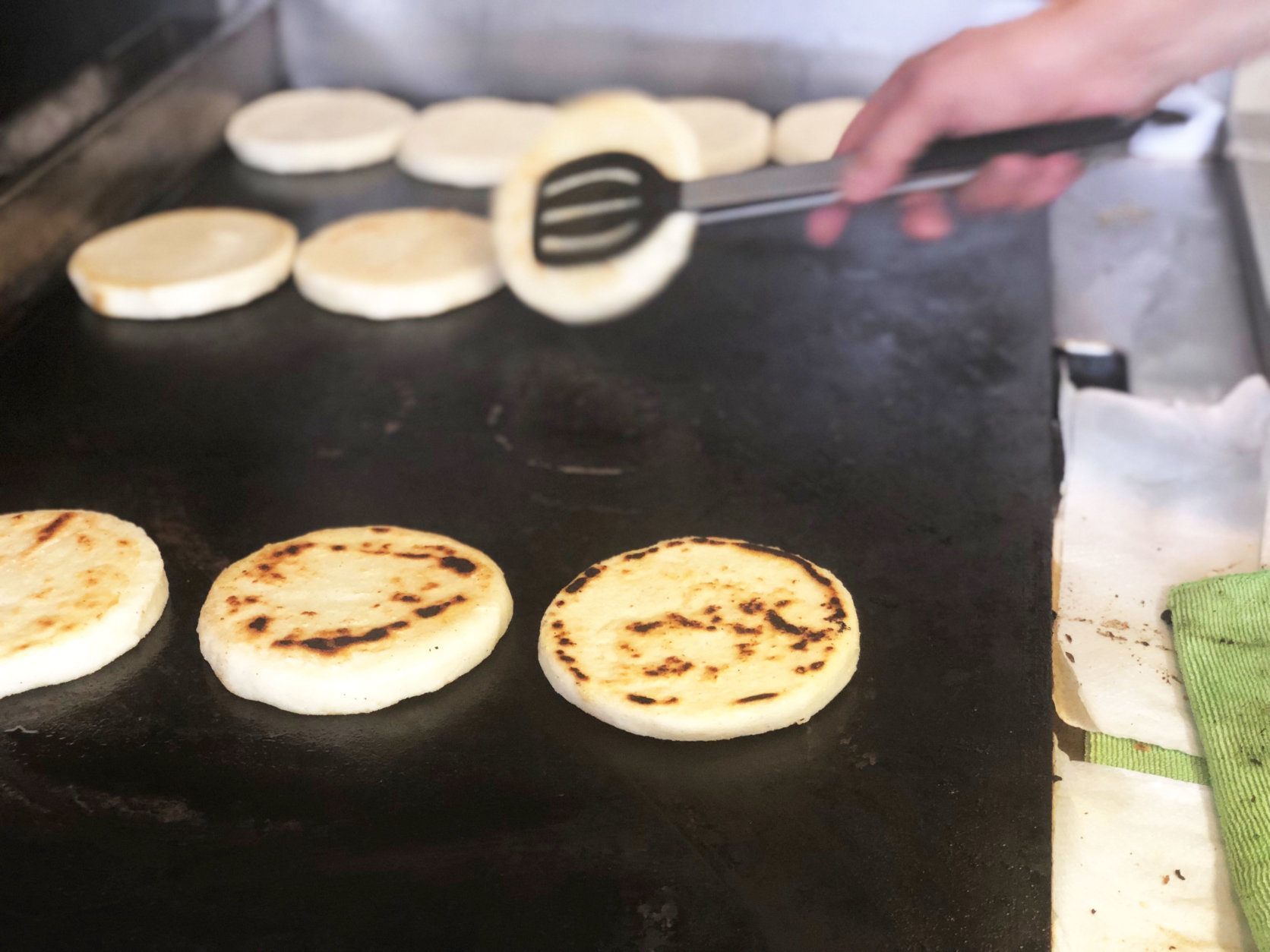 1/11
Arepas on the grill inside the Arepa Zone food truck in Northwest D.C.

It is not uncommon for Gabriela Febres to catch someone weeping outside of her Venezuelan food truck, Arepa Zone.

And when Febres spots the tears, she can’t help but smile.

“I think I read somewhere that food, or just flavors in general, are the biggest trigger for memories. So when people come and they say, ‘Oh my gosh this tastes like my grandmother’s food,’ that means the world,” said Febres, who launched the business in 2014 with Ali Arellano. 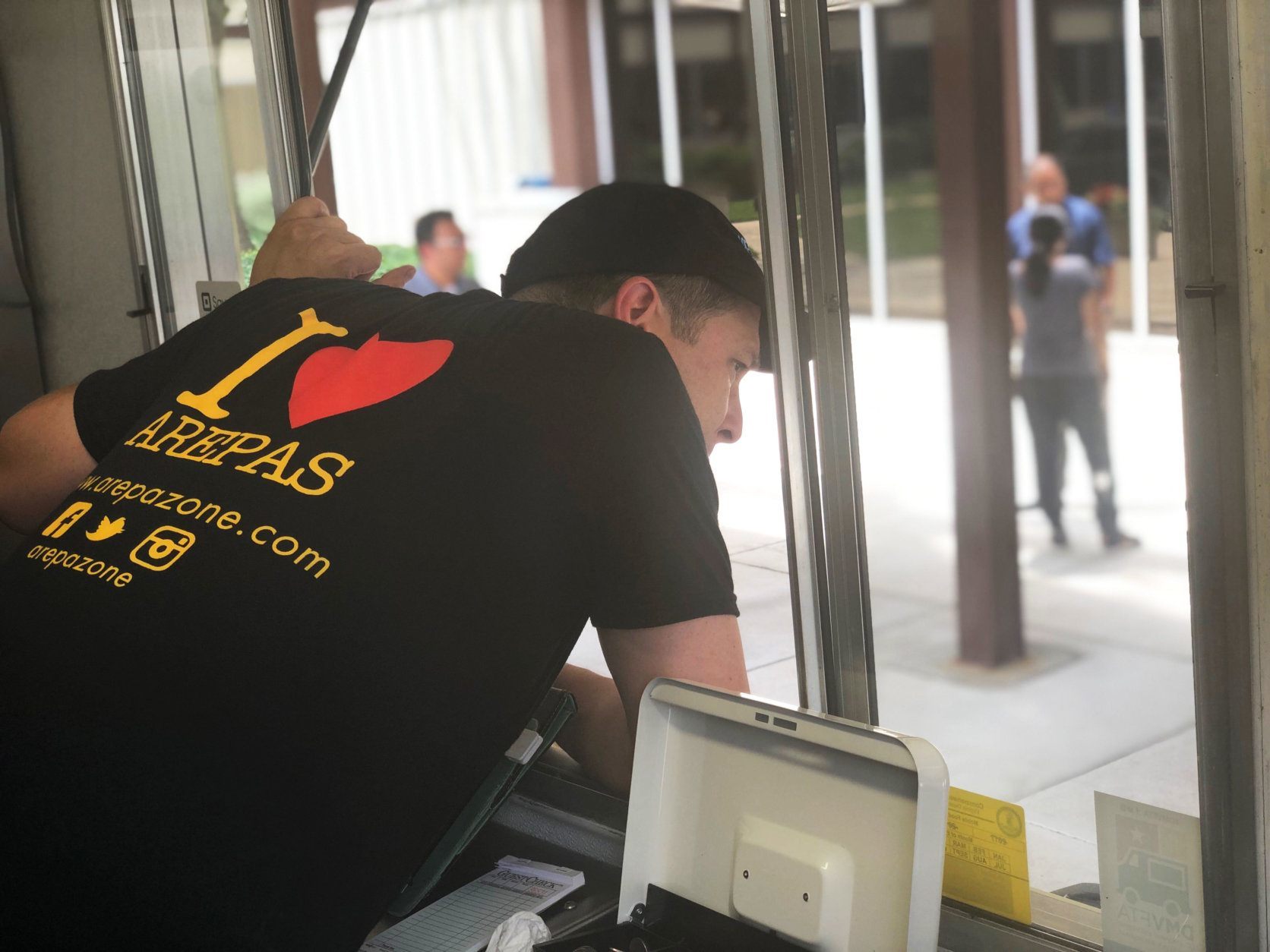 2/11
Arepa Zone co-owner Ali Arellano talks to a customer from the truck window in Northwest D.C.

It was Febres’ appetite for the flavors of her childhood that led her to start a food truck in the first place. She was born in Venezuela’s second-largest city, Maracaibo, and moved to the U.S. when she was 8. While studying music and audio production at American University, Febres had difficulty finding Venezuelan food in the D.C. area, so she and Arellano decided to change that — first with Antojitos de tu Pais, a business that sells imported Venezuelan sauces, cheeses and sodas, and then with Arepa Zone, known for its arepas, cachapas and tequeños.

“We were the first truck to do [Venezuelan food], and I think in part that has to do a lot with our success because we opened up a whole new world to the international community of D.C. that wanted to try something new,” Febres said.

“And for a lot of people, this is exotic, exciting. So we wanted to fill that void, and we’re still pretty much it.” 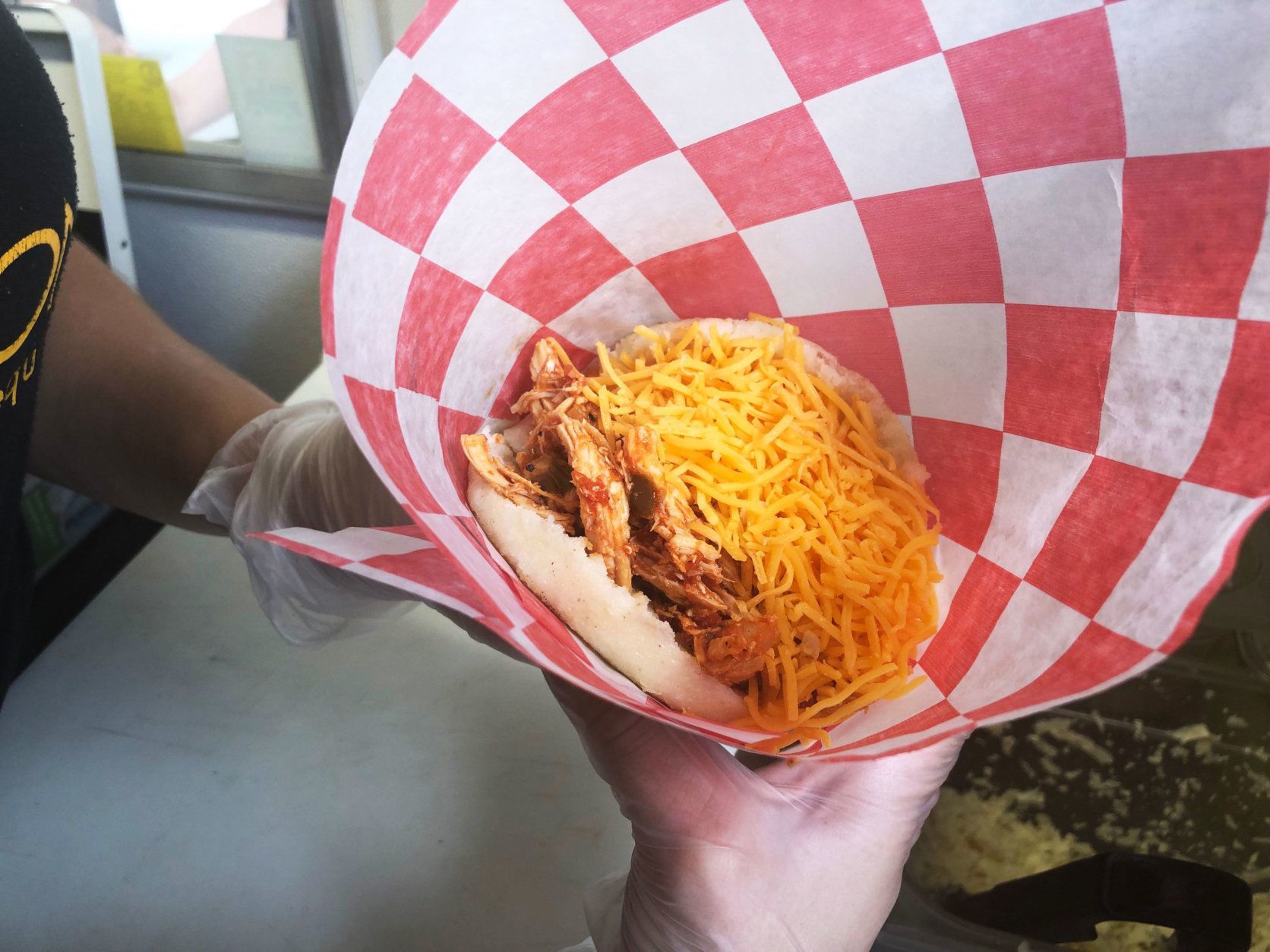 3/11
Arepa Zone is best known for its menu of arepas, a popular Venezuelan food.

Febres said being one of the few places to get Venezuelan food in the nation’s capital is “a big responsibility, so we always make sure we’re doing things right.” And that often involves video calls to her nearly 90-year-old grandmother, who walks Febres through recipes and techniques.

The owners also lean on tricks from Arellano’s mother when it comes to making the arepa dough.

“Everything we do, we’ve made it a macro version of our family’s recipes … Just calling the matriarchs in both of our families,” Febres said. 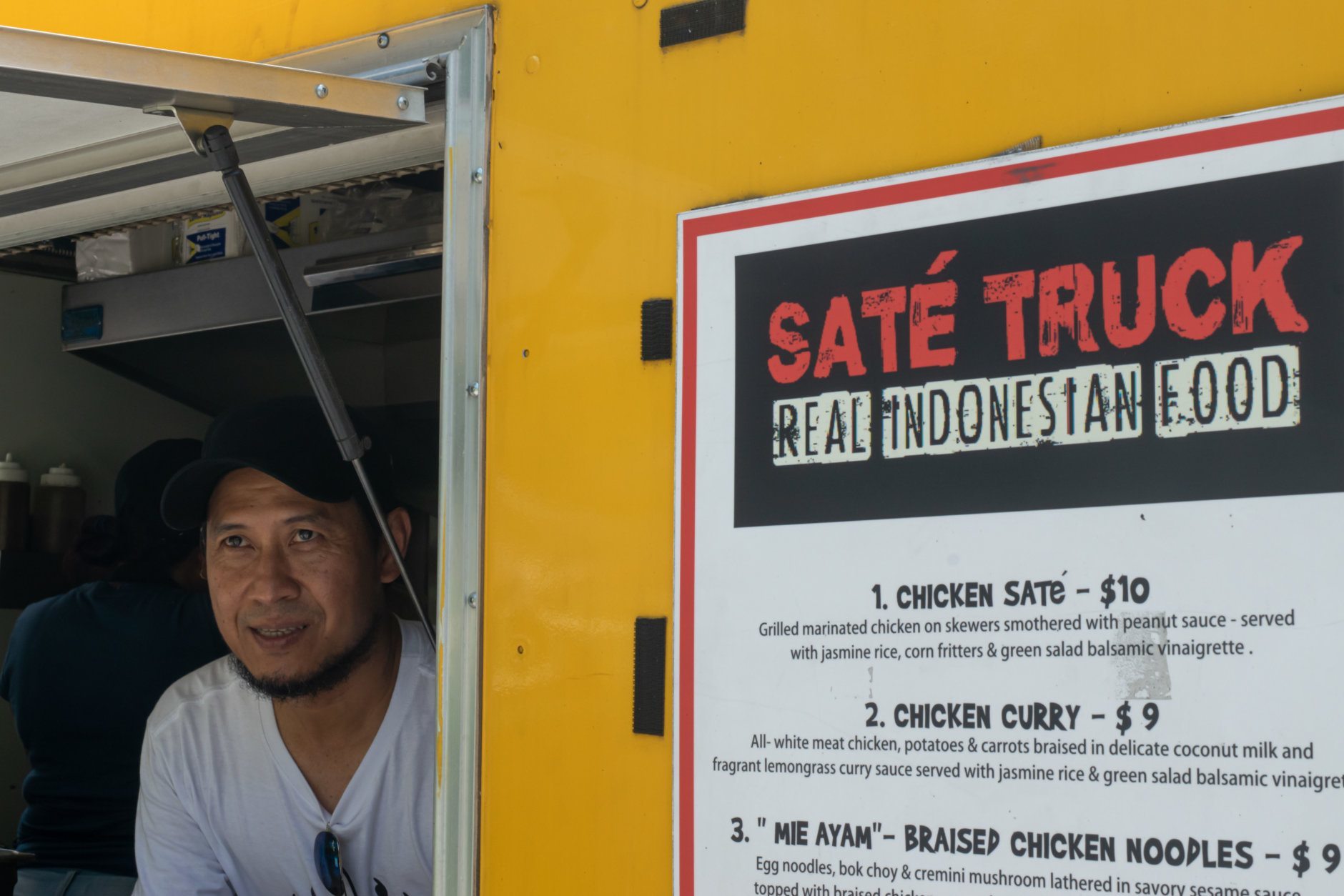 4/11
Sonny Setiantoko leans out the window of his food truck, Sate Truck, in Northwest D.C.

On the corner of 17th and K Streets NW, Sonny Setiantoko fills orders from the window of his food truck for spicy beef curry rendang, corn fritters and braised chicken noodles — all dishes from his native city of Jakarta. 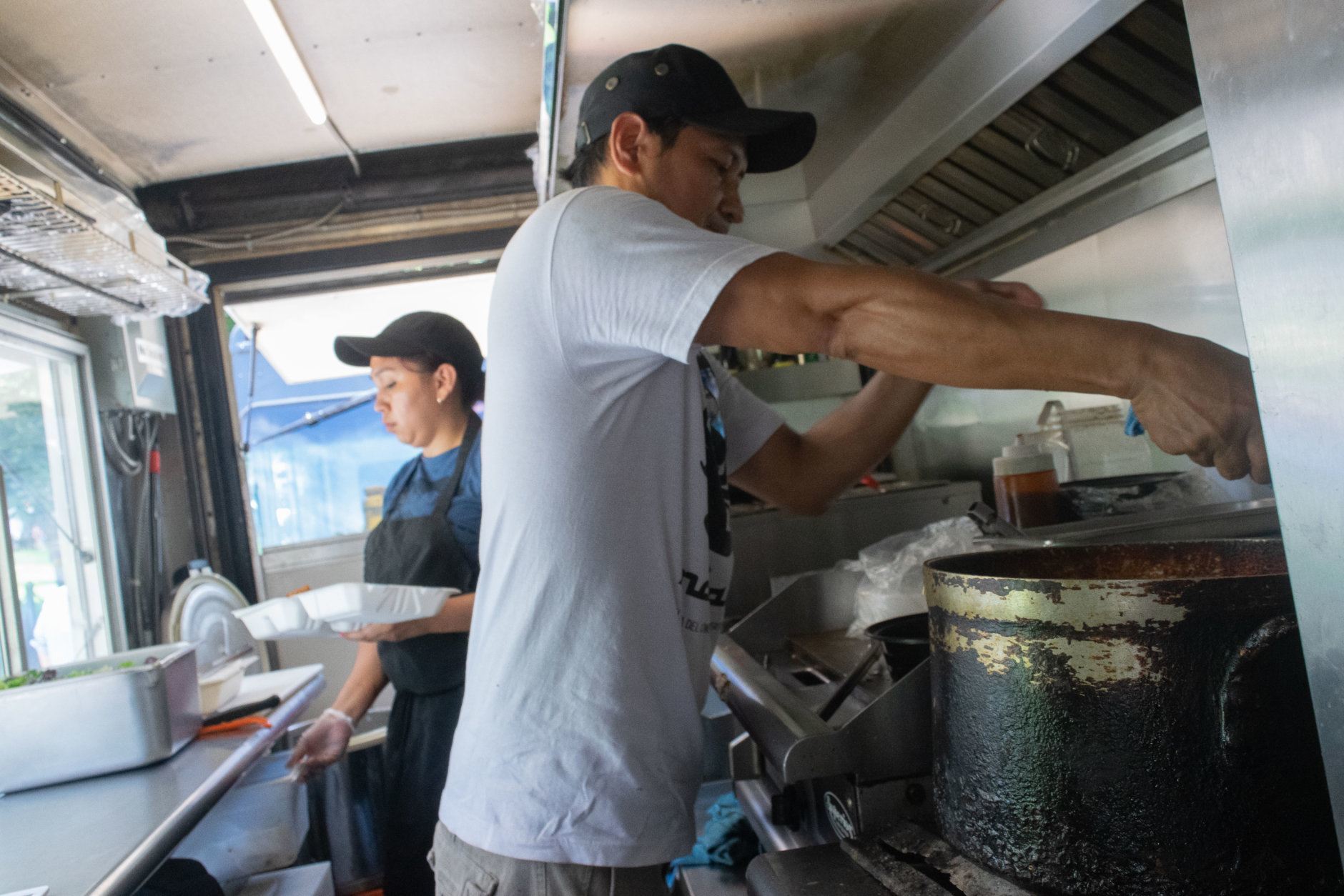 Setiantoko, 48, launched Sate Truck in 2013 as a way to introduce Washingtonians and D.C. tourists to Indonesia’s food culture. Just like Febres had difficulty locating Venezuelan restaurants, Setiantoko said he had trouble finding Indonesian food in D.C. six years ago. He decided a truck was an inexpensive and effective way to bring the foods and flavors of his home country to the masses. 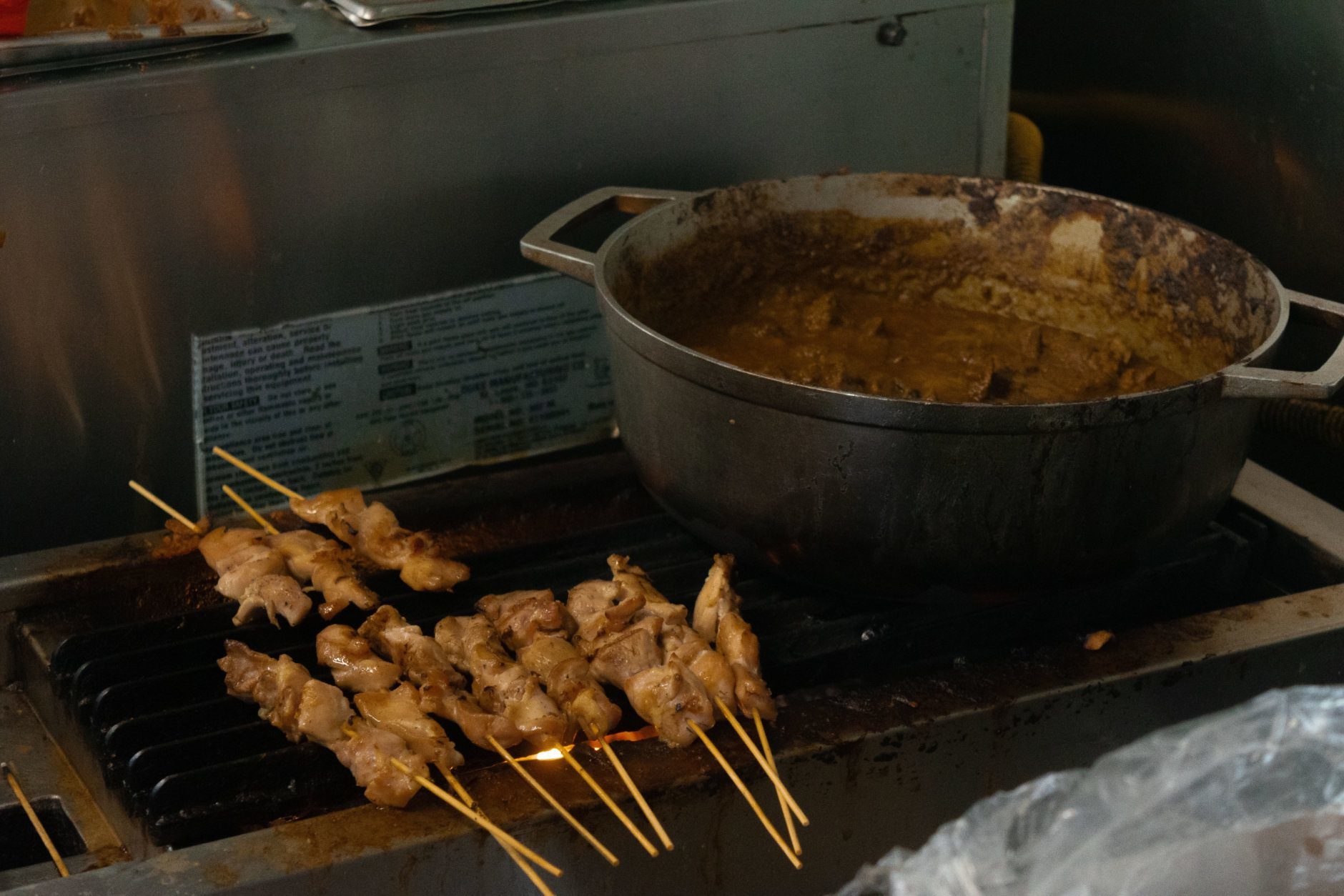 6/11
Chicken sate is one of the more popular menu items.

“We use a lot of coconut and garlic, a lot of chili, and we use a lot of kaffir lime leaves in our cooking — peanuts as well,” said Setiantoko, who describes Indonesian cuisine as one that draws on Chinese and Indian ingredients and preparations.

“It’s got curry, we use some soy sauce as well and noodles.” 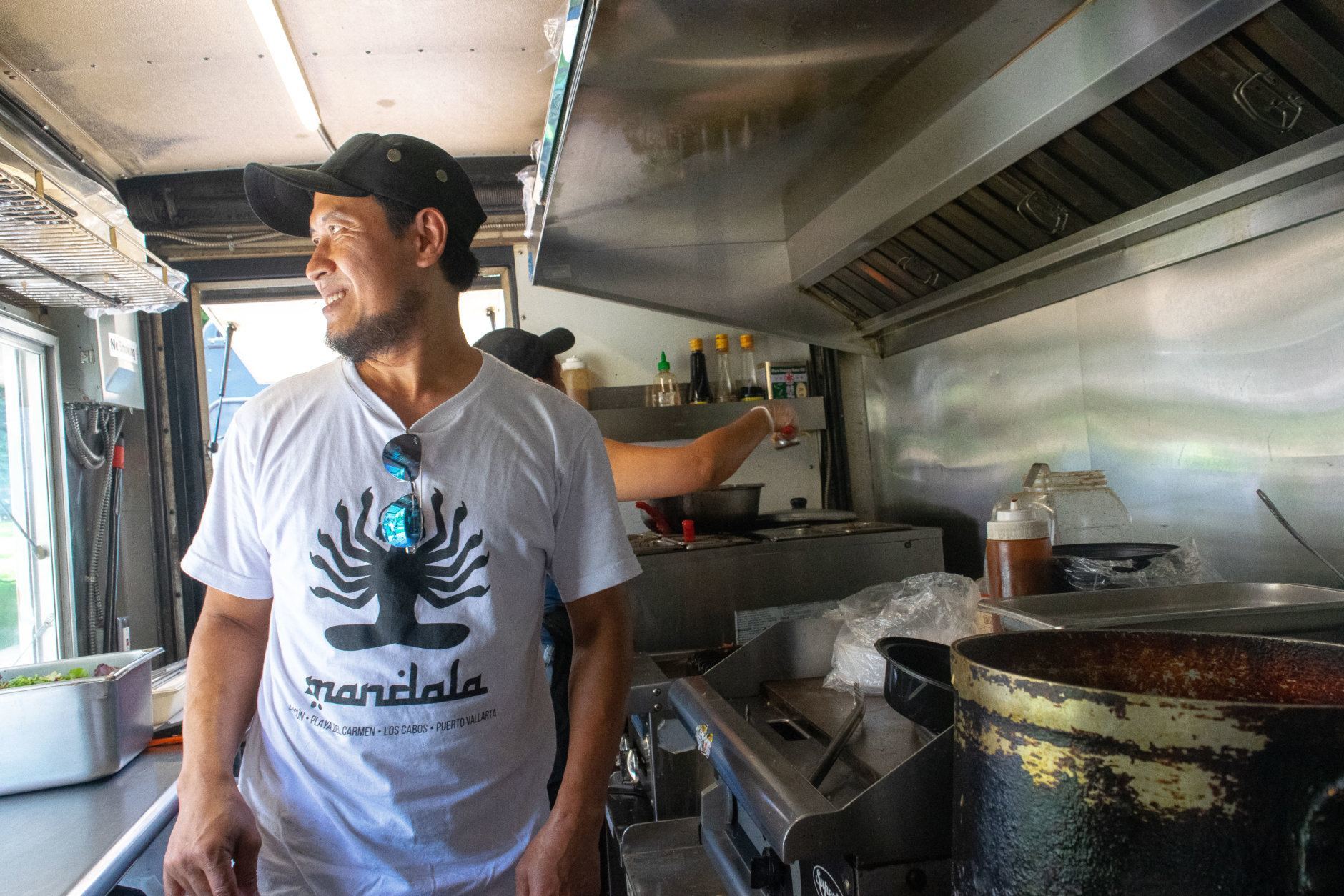 Setiantoko’s biggest sellers are the spicy beef curry and chicken sate, and on a busy lunch rush in Farragut Square, he’ll fill nearly 100 orders for those dishes and others that he learned to make from his mother and grandmother.

“I do what they did in Indonesia, so the flavor and the taste is just pretty much [like] back home. I do not modify [the food] in any way,” Setiantoko said. 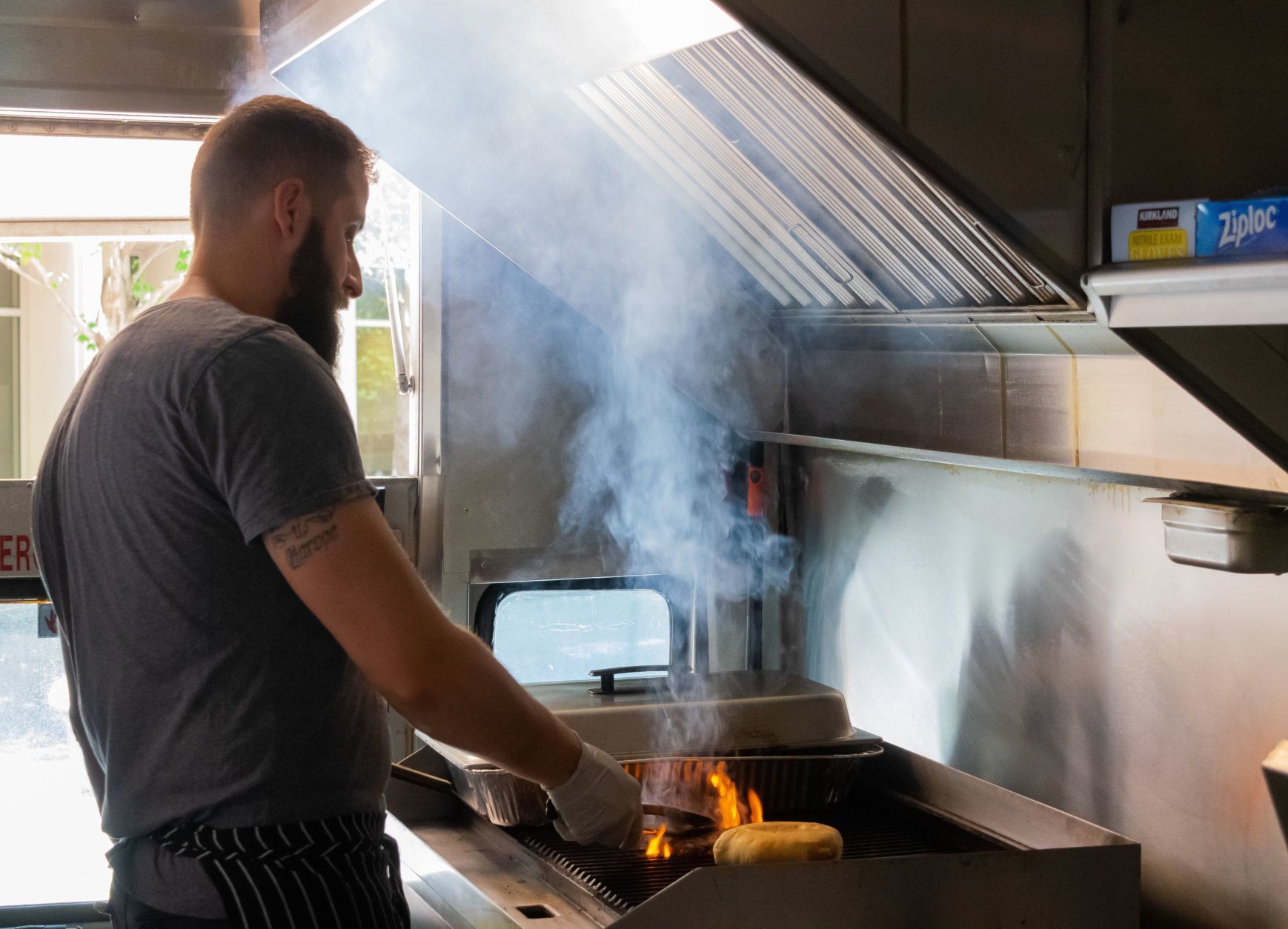 When Rosen Ivanov moved to the U.S. from Bulgaria in 2007, he had several years of culinary experience already on his resume. Ivanov continued to work in restaurants in D.C., but in 2014, traded in a spot on the line for a seat behind the wheel of his own food truck, Balkanik Taste.

“That was the reason I wanted to show people something different, show my cuisine.” 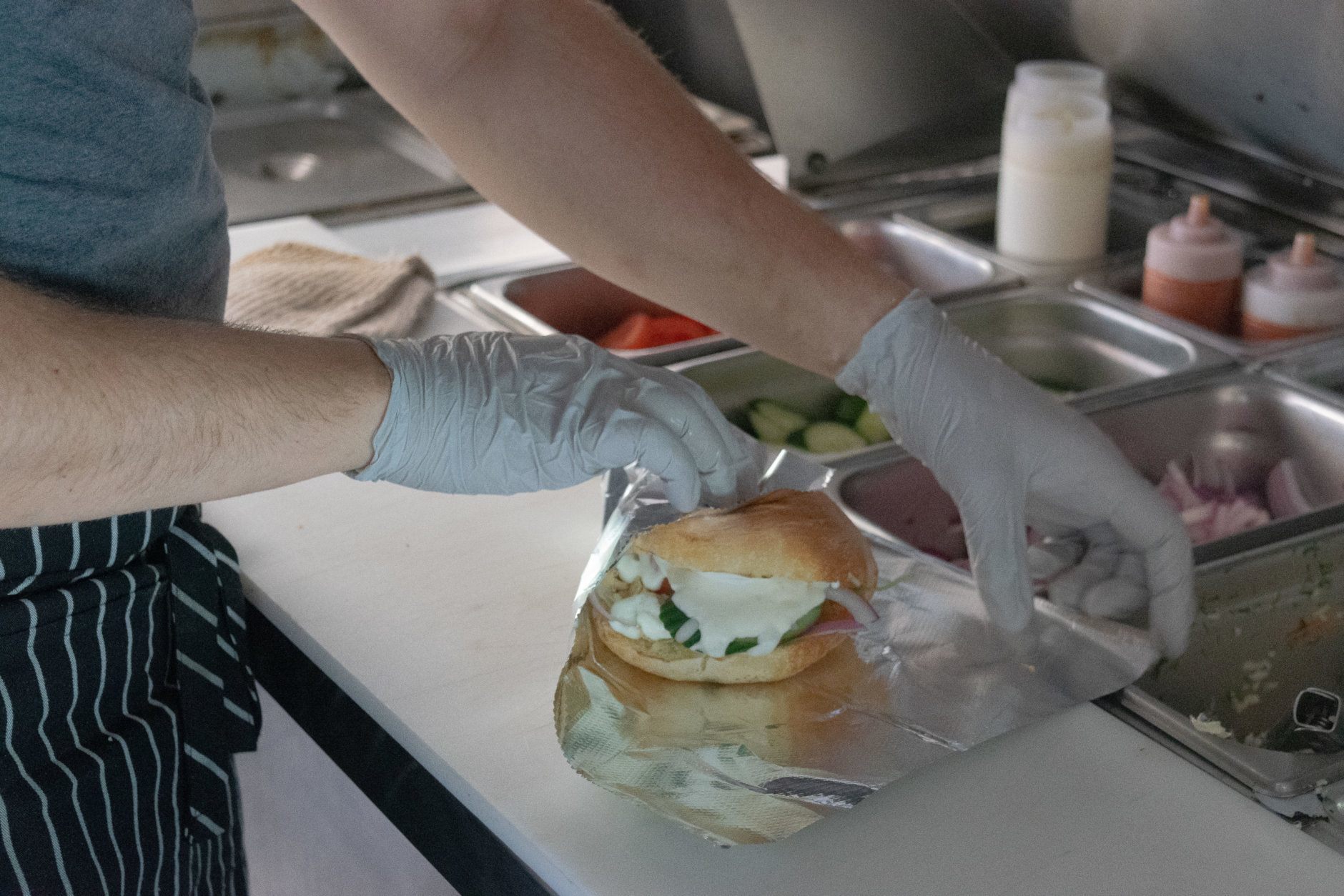 9/11
The lamb burger is one of the best-selling items at Balkanik Taste.

Customers can find plenty of Bulgarian street foods on the menu at Balkanik Taste, including kebapche and kyufte, but they’ll also find favorites from Serbia, Greece and Turkey.

Ivanov — who mostly takes his truck to destinations in Montgomery County and Frederick in Maryland — said Bulgarian cuisine is heavily influenced by both Middle Eastern and Mediterranean cultures. The lamb burger with garlic-yogurt sauce and feta cheese is one of his truck’s top sellers. There’s also a shredded chicken doner sandwich with garlic-yogurt sauce, cabbage slaw, cucumber, tomato and red onions. 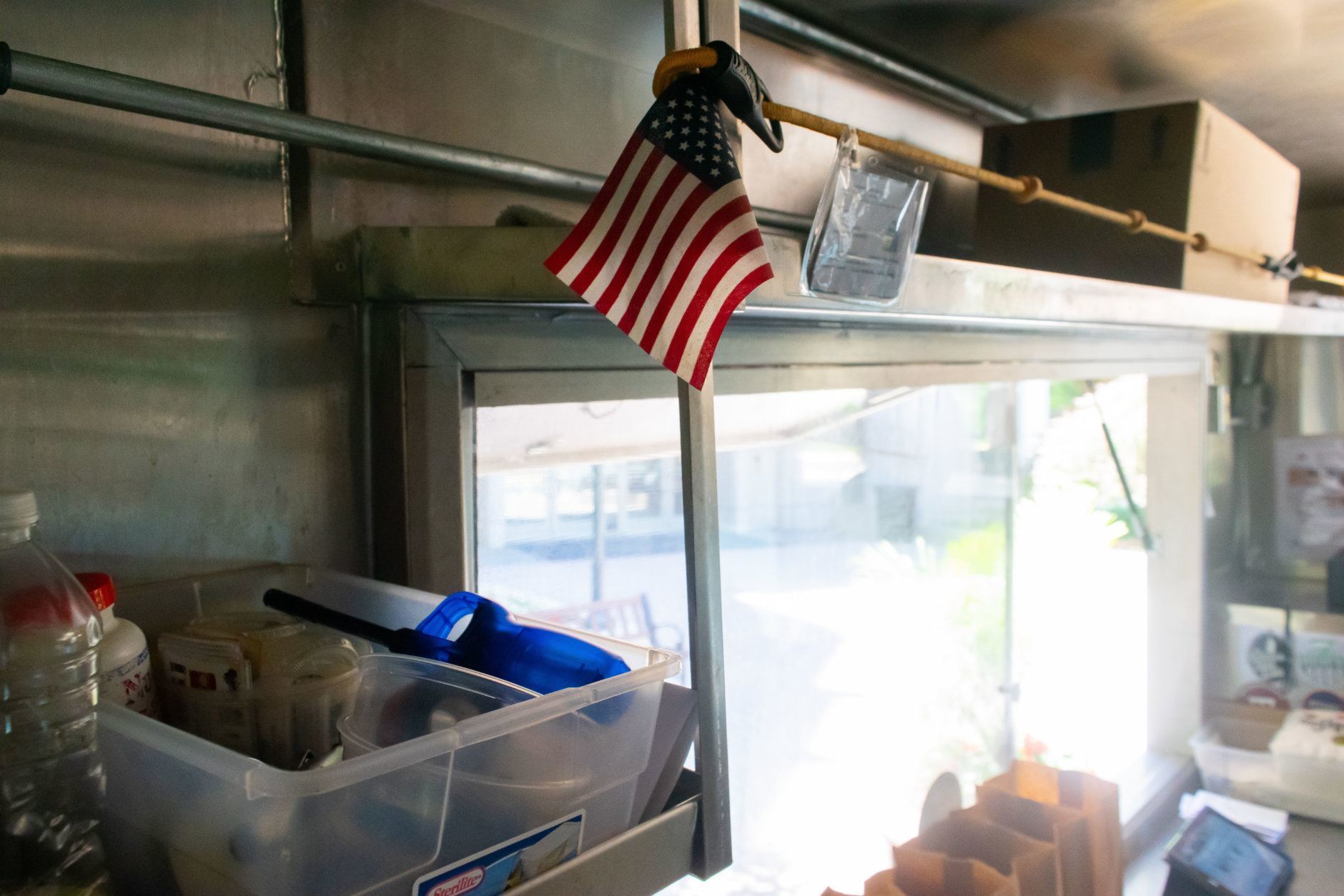 In addition to introducing people to the foods and flavors of the Balkans, Ivanov said his truck has also been able to bring a taste of home to Bulgarians living in the D.C. area. He just added kebapche as a regular menu item, after receiving high praise from other Bulgarians every time he cooked it.

“I’d just have it as a special and every time I did it, people would be like, ‘Man, that [brought] me back home,’” Ivanov said.

“Even me, remembering as a kid back in Bulgaria when you go to every festival, there’s some vendor selling this thing.” 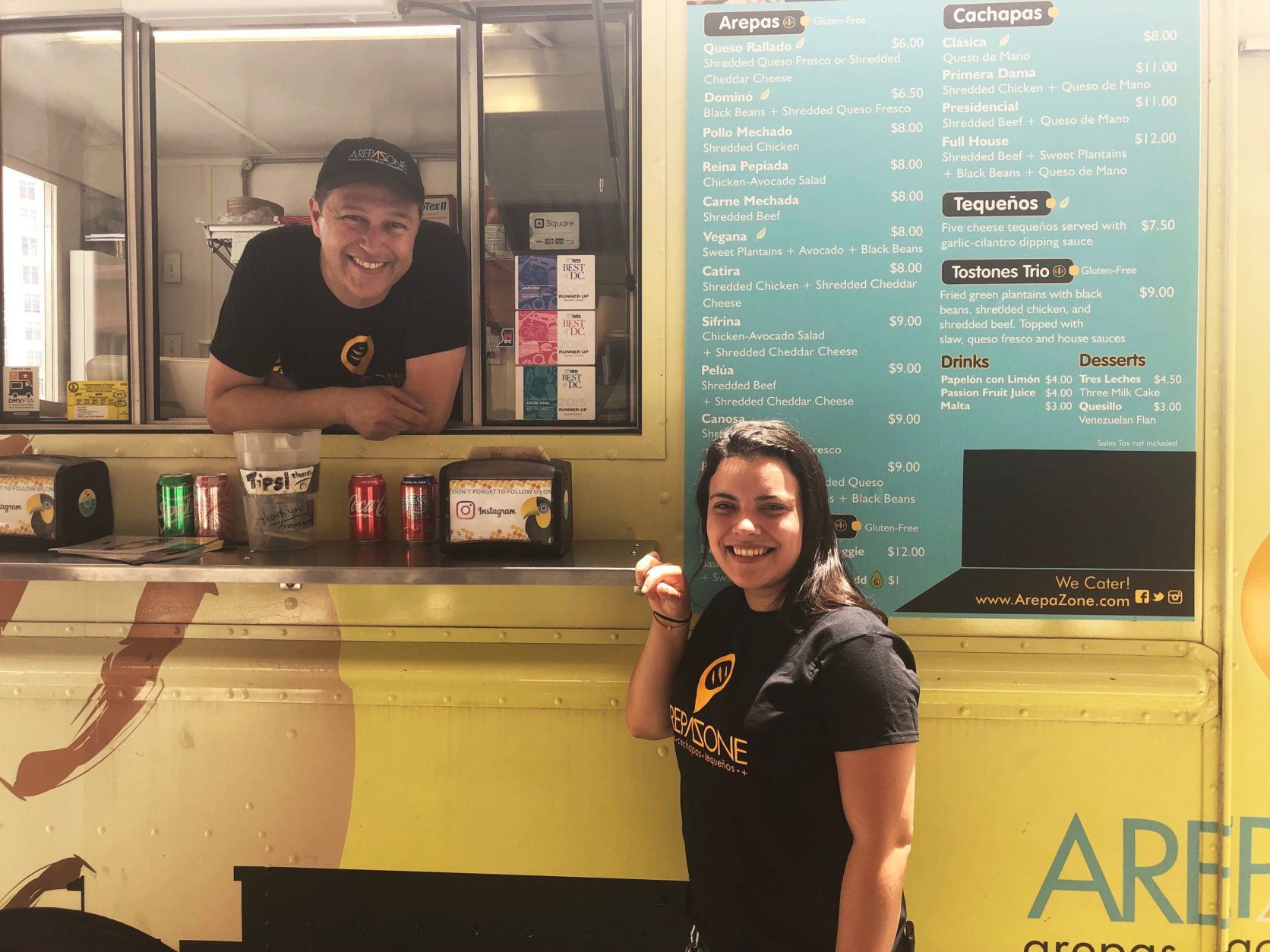 In the last few years, Arepa Zone’s reach has grown beyond its four wheels. Febres and Arellano have a brick-and-mortar restaurant on 14th Street NW, plus stands inside D.C.’s busy Union Market and at D.C. United’s Audi Field.

With its growth, Febres said keeping the food as authentic as possible is always top-of-mind. She said she knows she’s doing something right when her restaurant is full of Venezuelans.

“I always sort of stay staring at a person when they’re biting into their arepa. When I see them licking their fingers and stuff, I’m like, ‘OK. They’re coming back.’”