Thousands of motorcyclists taking part in the Rolling to Remember rally kicked off their ride from RFK Stadium to the National Mall on Sunday. The demonstration began at noon with an estimated 50,000 bikers.

Rolling to Remember, organized by AMVETS, is meant to draw awareness to service members missing in action and to the ongoing mental health crisis among veterans.

“POWs and MIAs, it’s something that we don’t want to ever forget as an organization, and it’s our way to say thank you,” said Mick Ciesla, National Second Vice Commander for Sons of AMVETS.

Motorcycle rides honoring missing soldiers and veterans have been taking place in D.C. for over 30 years. Until 2019, the largest ride was held by Rolling Thunder, but the group stopped hosting its annual event because of logistical headaches with Pentagon Police.

Since then, Rolling to Remember has taken over the tradition, but the event was canceled last year due to COVID-19 concerns.

“It was hard for it to be canceled, with the pandemic coming, and of course we knew it had to happen. It was hard to not do things and it actually shut a lot of things down that we do for the veterans,” said Dee Baggett, AMVETS Ladies Auxiliary National President. “So, it’s great that we’re opening back up and we’re here for the causes we believe in.”

Typically, the group uses the Pentagon as a staging area, but this year Rolling to Remember was denied permission to stage there because of coronavirus concerns, which is why the bikers gathered at RFK Stadium this year.

The group left RFK and took I-395 to head to the National Mall. Dozens of road closures and parking restrictions were in place to accommodate the event. WTOP’s Steve Dresner said, considering the number of road closures put in place, the amount of traffic disruption was minimal. 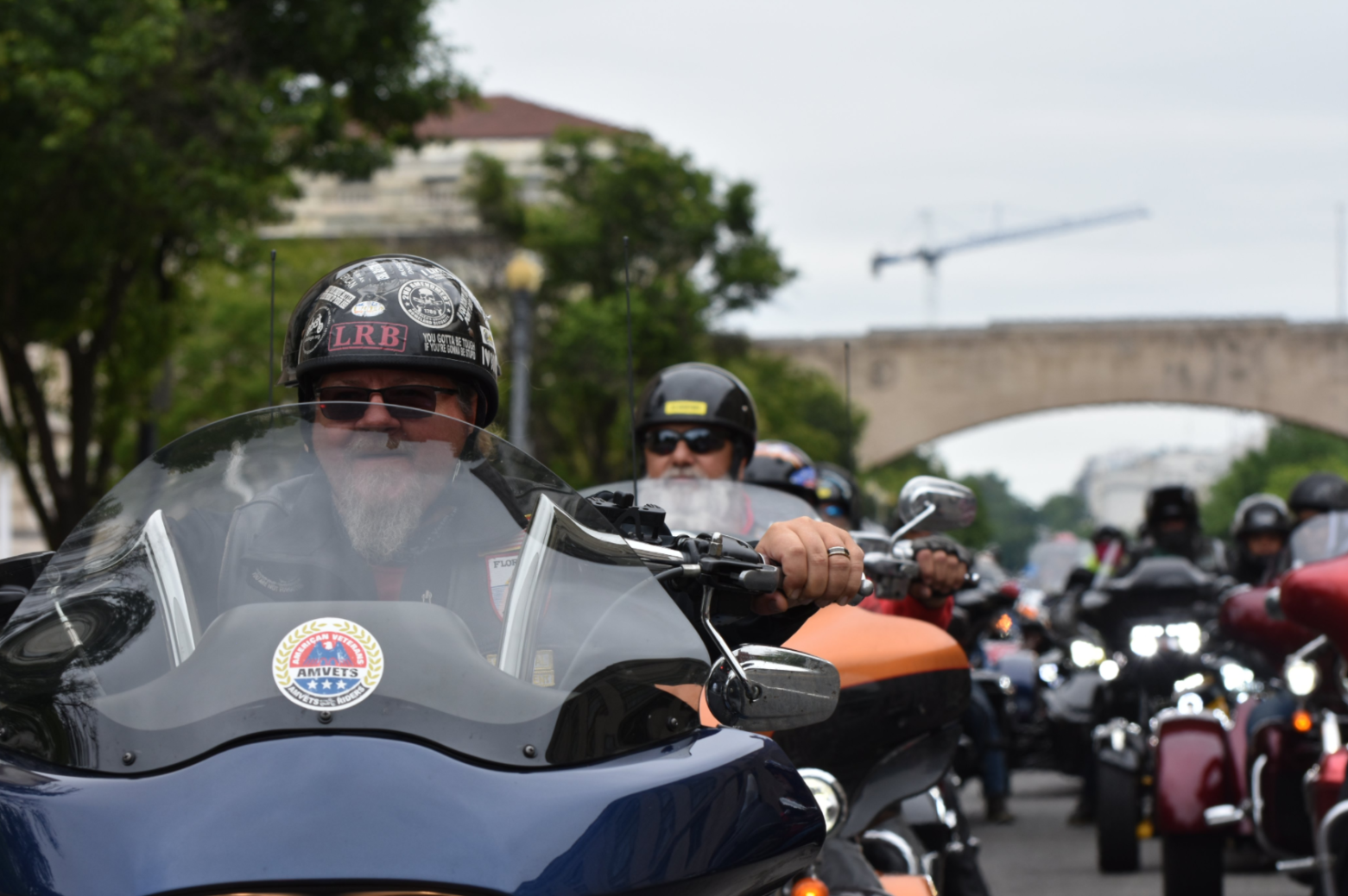 1/10
Bikers lined the streets of D.C. on Sunday afternoon as part of Rolling to Remember, a motorcycle rally held in honor of fallen soldiers and the ongoing mental health crisis among veterans. (Courtesy AMVETS) 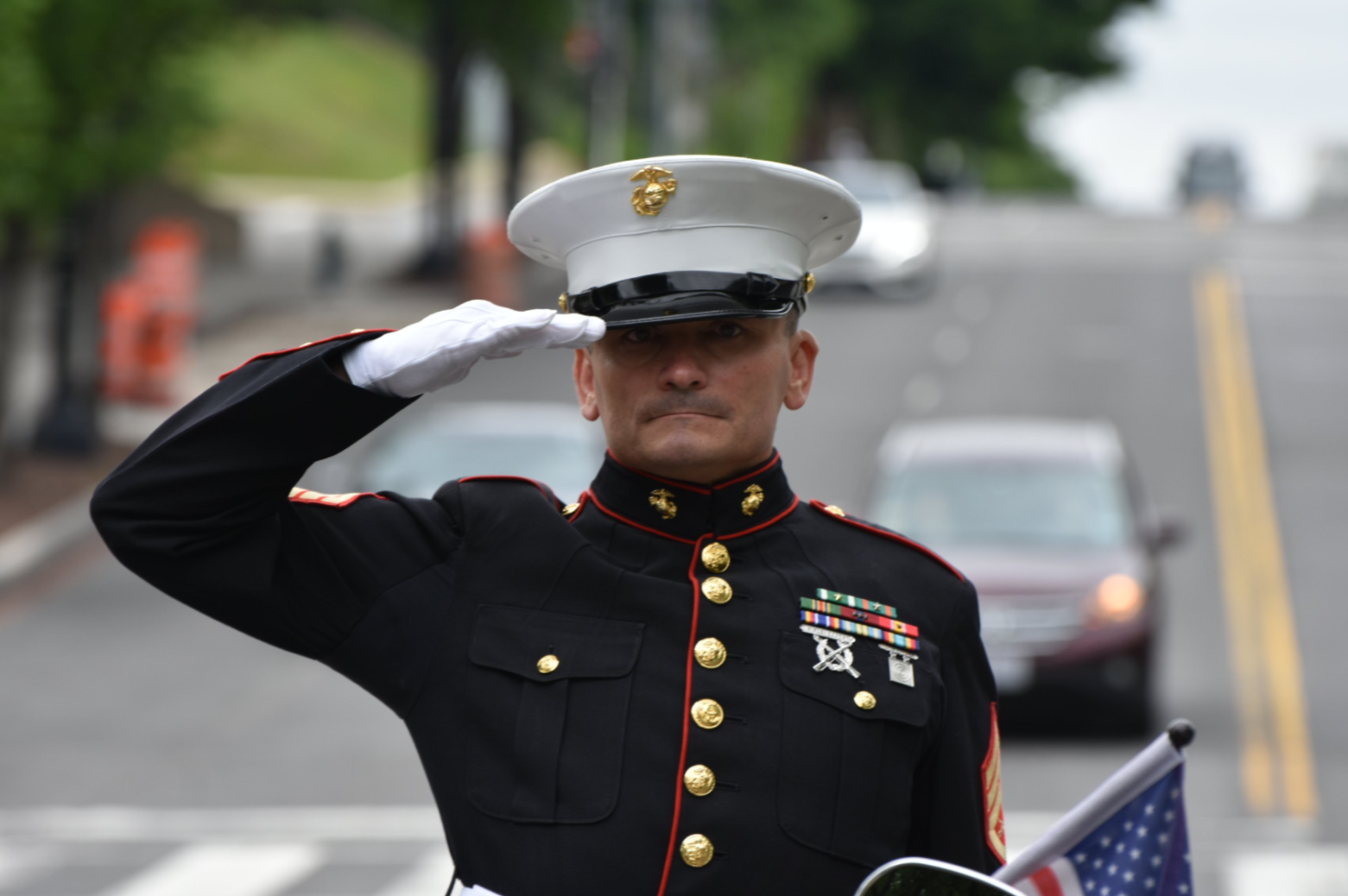 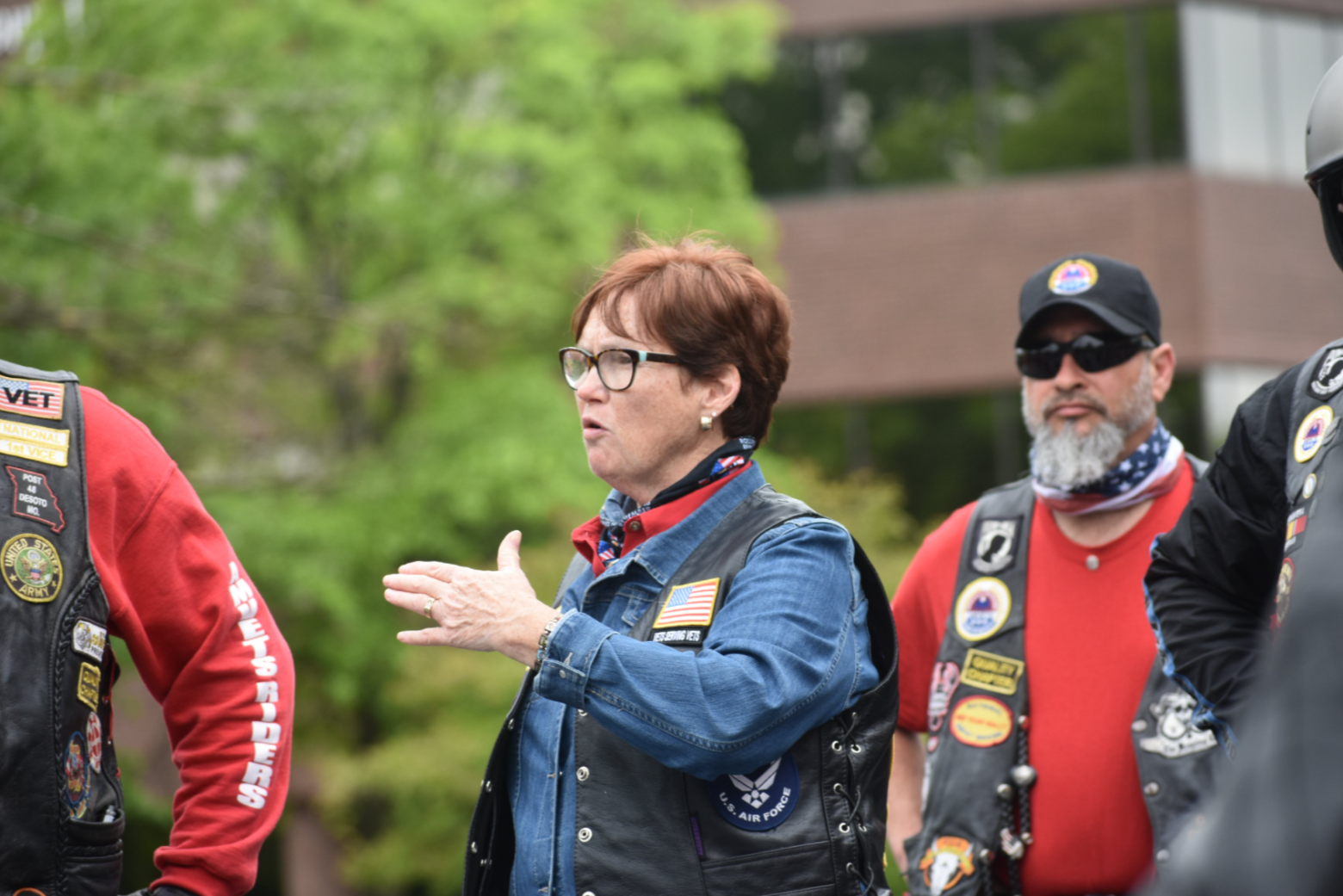 3/10
Along with the ride, literature was handed out and people spoke at the event. (Courtesy AMVETS) 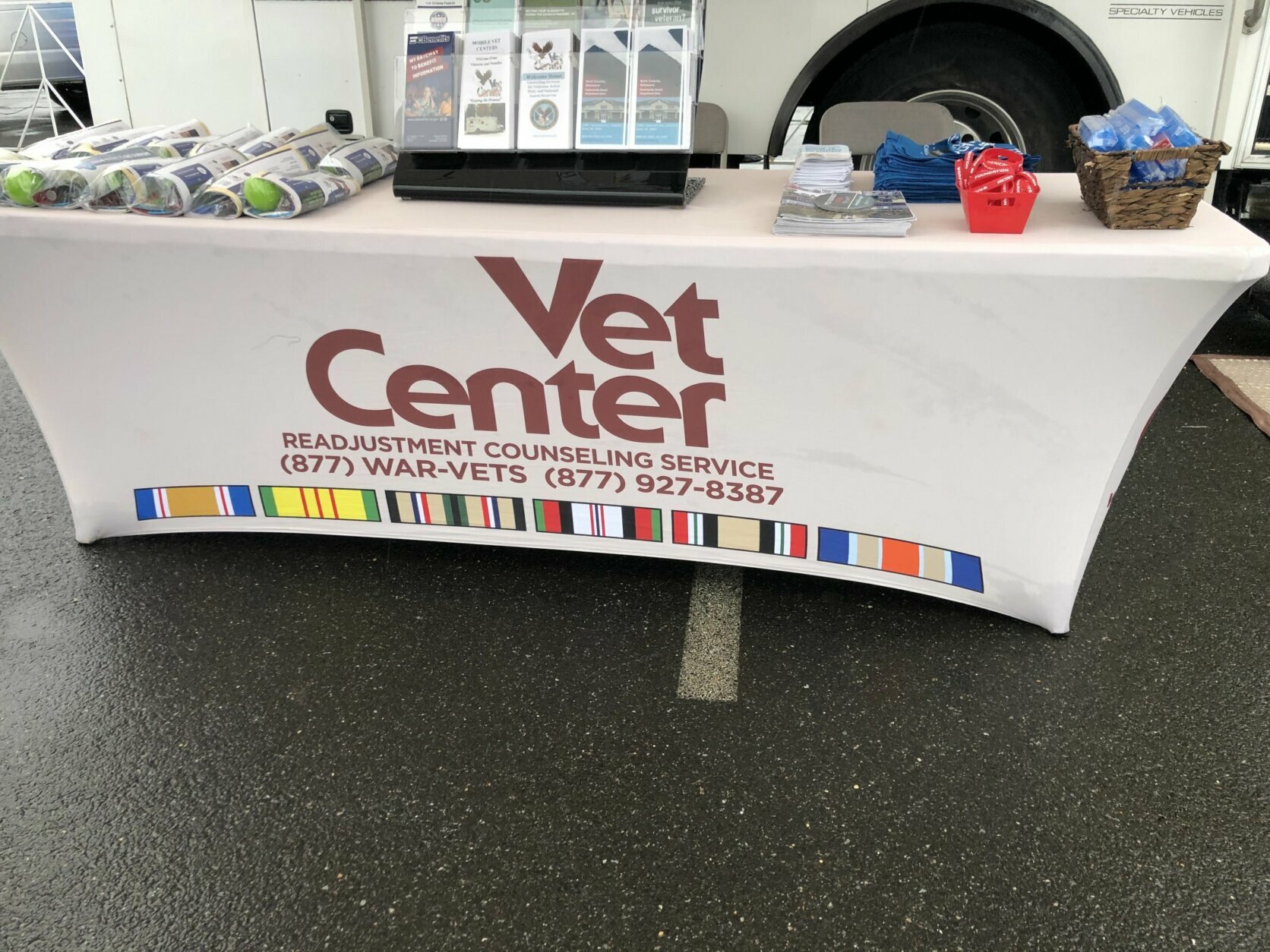 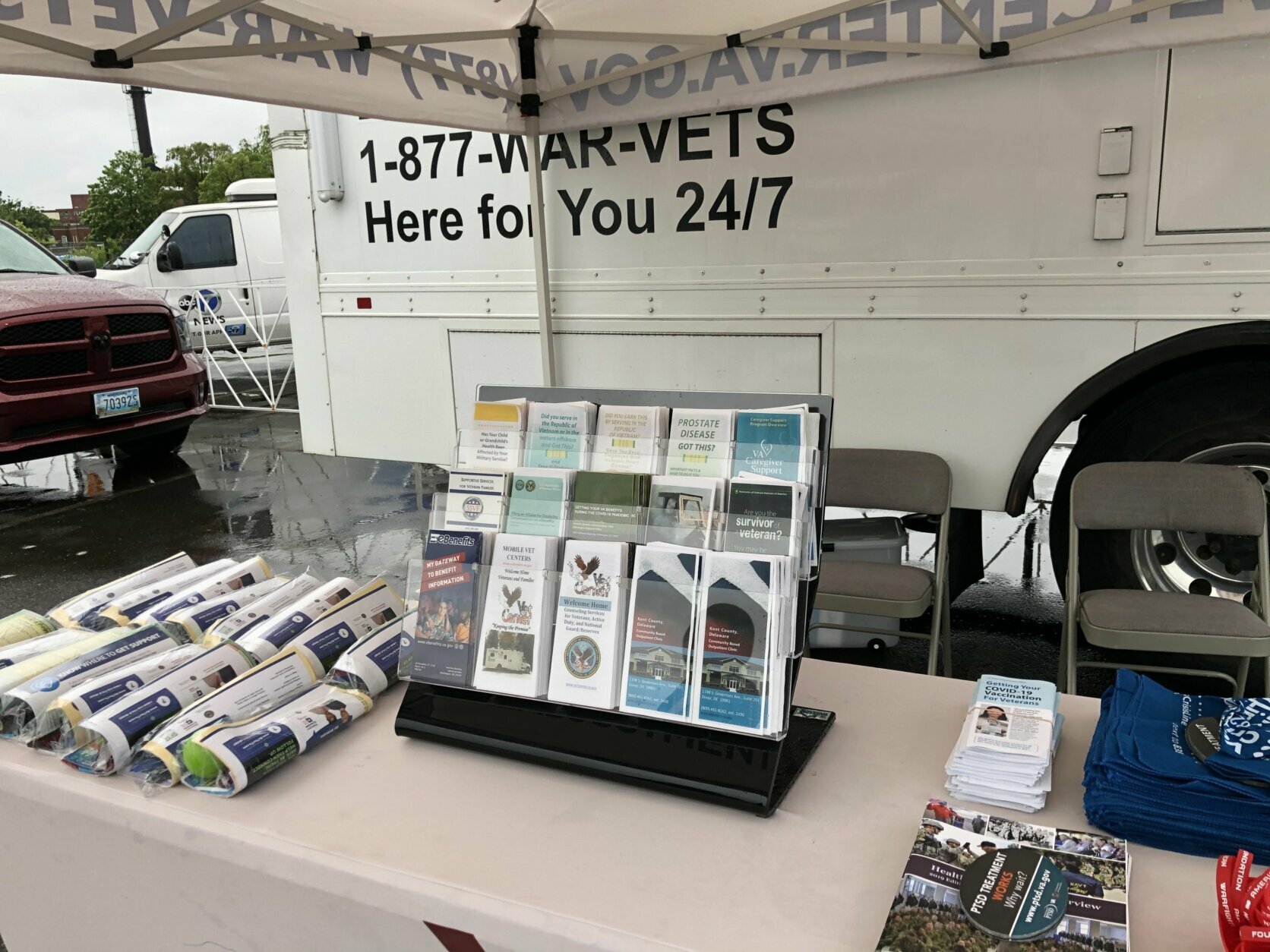 5/10
Materials were available to educated attendants on the issues veterans face. (WTOP/Acacia James) 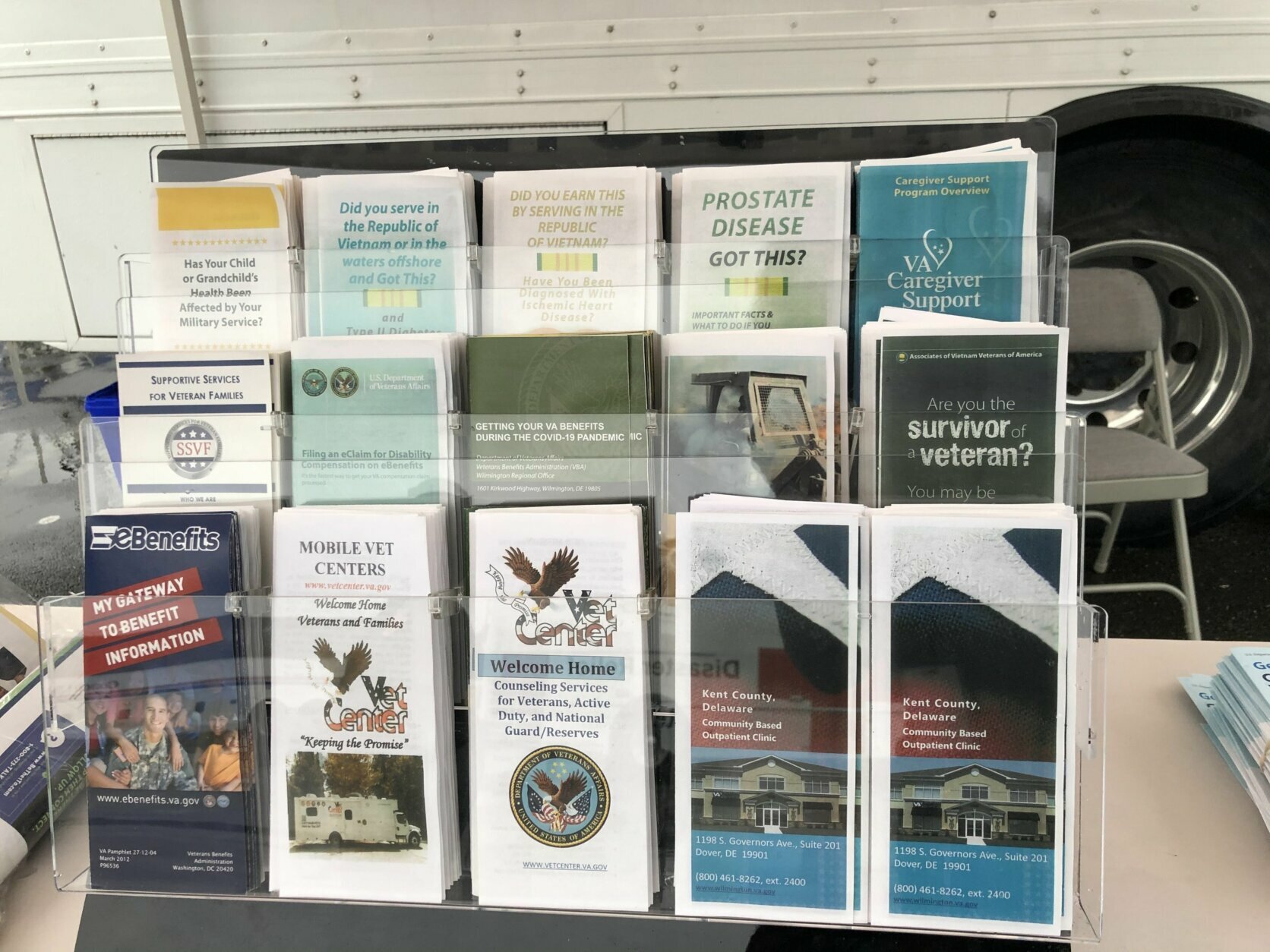 6/10
Literature at the event aimed to educate people on PTSD and other mental health issues veterans commonly deal with. (WTOP/Acacia James) 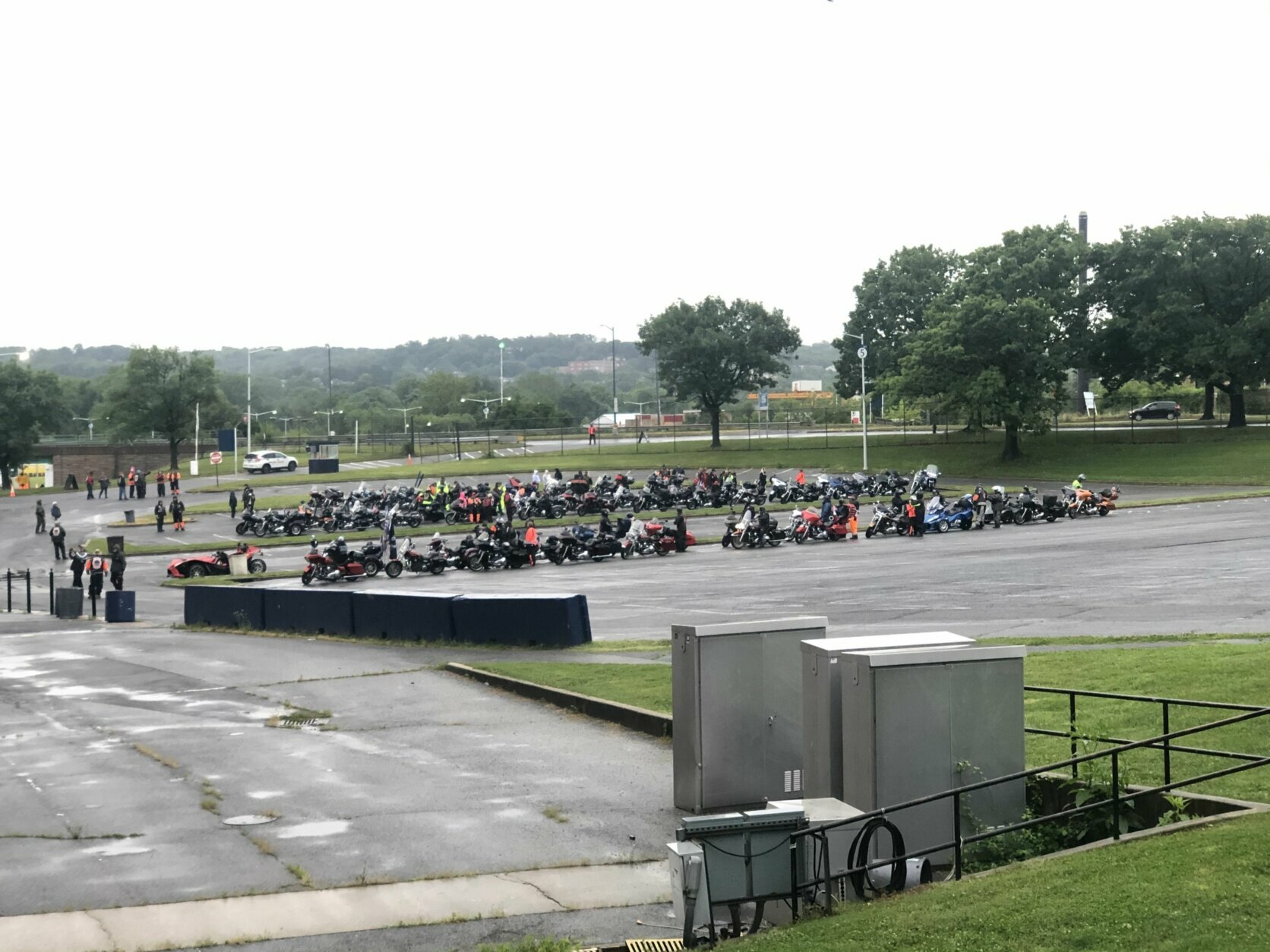 7/10
The motorcycles poured out of the parking lot of RFK Stadium around noon Sunday. (WTOP/Acacia James) 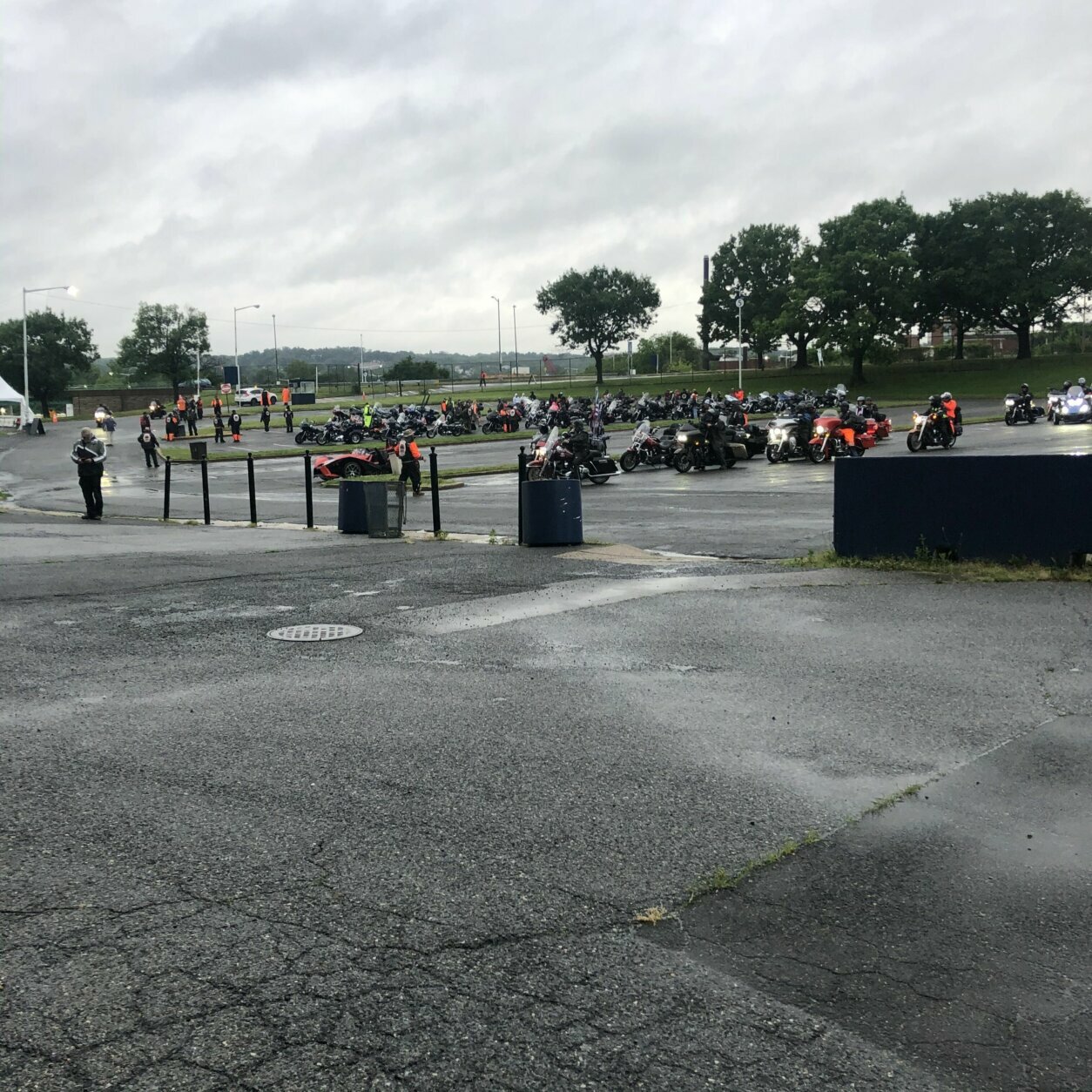 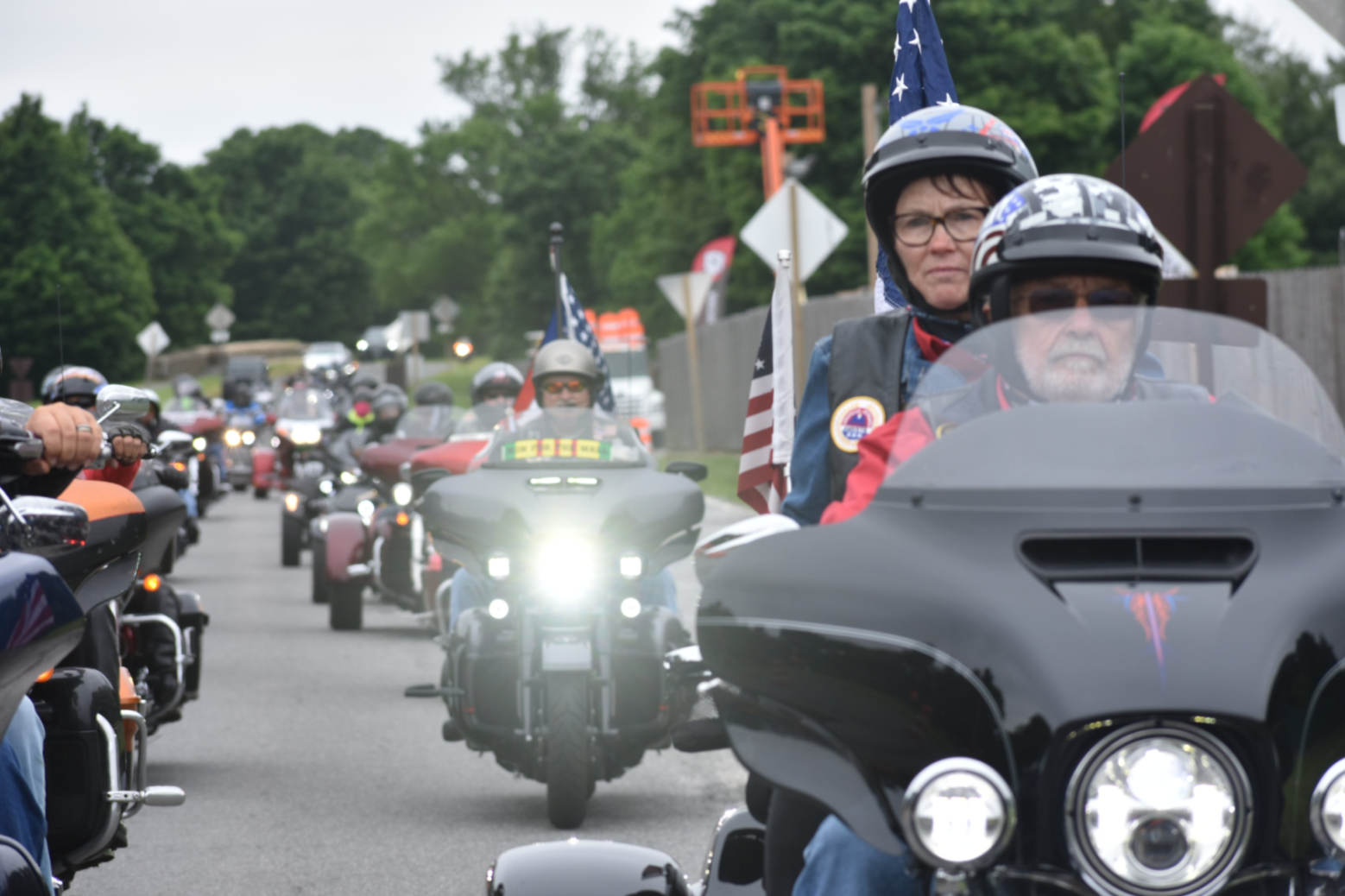 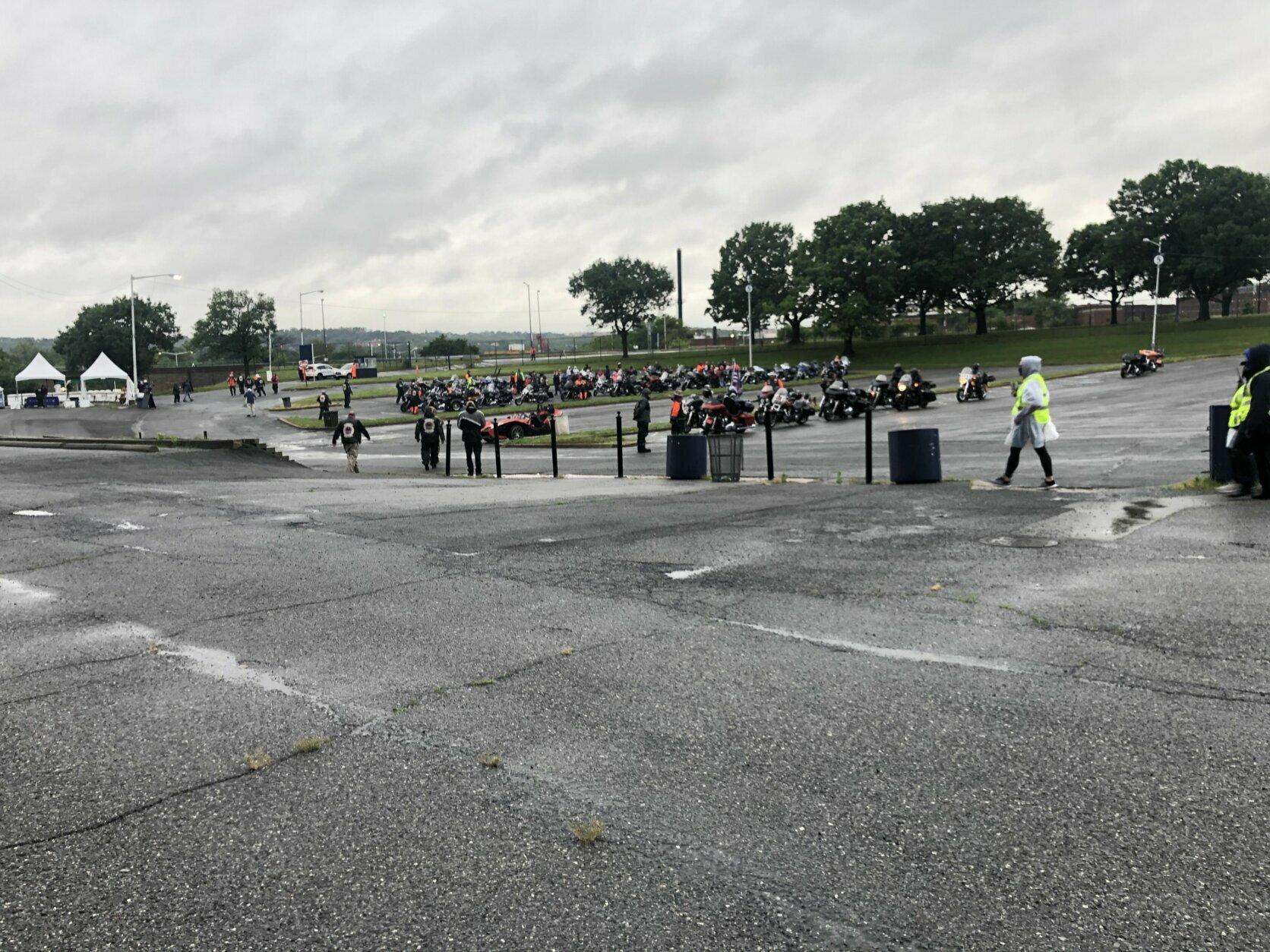 10/10
Despite the rain and overcast weather, thousands of bikers showed up after the event was canceled last year due to COVID-19 concerns. (WTOP/Acacia James)