Restaurants and bars across Frederick County, Maryland, can now stay open until midnight, although alcohol sales must end at 10 p.m., under a new county order.

Frederick County Executive Jan Gardner issued Executive Order 02-2021 on Thursday “in an effort to protect public health while balancing the economic impacts associated with the COVID-19 pandemic,” according to a county news release.

The order allows “restaurants and other food service establishments in the County to extend their hours for food service to midnight.” It allow alcoholic beverages to be sold until 10 p.m. and “prohibits bringing alcohol onto the premises to be consumed after 10 p.m.” as well.

Any live entertainment must end by 10 p.m.

The county said “the order will be revisited in one week as health metrics continue to be monitored.”

Jaime Ellis-Ade, the general manager of Brewer’s Alley, on North Market Street, said the move helps a bit, because they don’t have to tell their patrons to leave at 10 p.m., but cutting off alcohol sales at that time “doesn’t help us at all.”

Still, she said, “Our doors are open so that’s better than doing curbside or carryout.”

Jennifer Dougherty, owner of Magoo’s Pub, said they’ll still close at 10: “Restaurant people aren’t yet vaccinated,” she said; “… I probably won’t see any change until we start getting vaccines here.”

Staying open past 10 for food doesn’t really help, she said: They usually close the kitchen at 10 anyway, and keeping it open later means paying the kitchen staff, for not much extra in sales. “In Frederick … not many people eat between 10pm and midnight. This has been sort of an effort to sound like you’re helping.  Maybe it helps Denny’s and the late-night places and the diners, but it doesn’t help us.”

The only thing that will help, she said, are immunizations and the return of outdoor dining-friendly weather: “The best thing is vaccines and sunlight. That’ll help us.”

Frederick County’s positivity rate, which was 6.4% as of Thursday, has remained above the state average since Dec. 5, 2020. The rate of cases per 100,000 people has exceeded the state average for months, at one point reaching a high of 78 as well, according to the county.

There are 15,845 confirmed cases of the coronavirus in Frederick County as of Thursday,
and 243 deaths from the virus, according to the Maryland Department of Health.

“More deaths associated with COVID-19 were reported in January than in any other month since the beginning of the pandemic. While health metrics appear to be improving, it is not yet a trend and concern remains about the risk for spread of the virus in the community,” the county said.

“If businesses and individuals want our economy to recover, we must win the fight against the virus by everyone doing their part. It is a matter of personal responsibility. Unfortunately, the actions of a few can harm the efforts of the majority,” said Gardner.

Neighboring Montgomery County has a ban on indoor dining, the only one in the state. 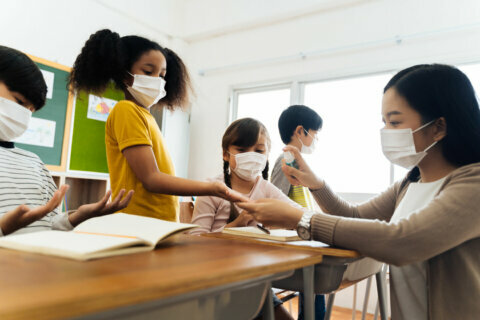