A no-fuss dumpling, noodle and donburi tea house and bar opens in D.C. — and the focus of the food menu is a hard-to-find favorite.
Listen now to WTOP News WTOP.com | Alexa | Google Home | WTOP App | 103.5 FM

WASHINGTON — It’s safe to say that Tim Ma has had a busy year. Actually, a busy seven years.

Since 2009, the chef and restaurateur has opened three restaurants in Northern Virginia and two in D.C. — both in the same year. His latest project, Ten Tigers Parlour, made its public debut last weekend.

The casual Petworth tea house in the former home of Chez Billy is quite different from Ma’s more formal D.C. dining spot, Kyirisan.

At Ten Tigers, the food is no-fuss; the décor is “19th century opium den”; and come January, the dining room will be open during the day for coffee, tea and pastry service.

Tables in the two-story Georgia Avenue space are even equipped with outlets for locals in need of a bubble tea and a mobile office.

Ma, who worked as an engineer before he became a chef, describes the menu at Ten Tigers as Asian street food with a Chinese focus. Diners can graze on a selection of dumplings, bao buns, noodle bowls, rice donburi and skewers — all of which ring up under $12.

“There are certain dishes on the menu that were inspired from things that I ate growing up in my family,” said Ma, whose parents used to run their own Chinese restaurant in Arkansas.

One of the noodle dishes is even a recipe from Ma’s uncle. (Of course, Ma’s parents, who stopped by Ten Tigers two days before it opened, were quick to point out how much their son’s dish deviated from the original version.)

“They were like: ‘No, no no. You have this wrong. You need to use this in order to make it,’” said Ma, who  was tapped to design the food menu at Ten Tigers by brothers Ian and Eric Hilton and partner Scott Herman.

However, the item receiving the most attention on the food menu is the soup dumpling — a food that’s developed somewhat of a cult following in recent years. While soup dumplings are relatively easy to find at Chinese restaurants in the Virginia and Maryland suburbs, very few places in D.C. serve them — or, if they do, they’re on the small side, Ma said.

The key ingredient in the darling dish is a gelatinous stock, made from chicken feet and bones. Ma explains the stock is reduced over the course of a day to the consistency of a jelly. Then, it’s added into the dumpling dough, along with meat, Chinese chives and seasonings.

“When you steam it, the [gelatinized stock] turns back into stock, but it’s enclosed in this little cute package,” Ma said. “It’s kind of fun to eat. It packs a lot of flavors. It’s unique.”

His definition of “fun” translates to “messy” for many, hence the need for online tutorials demonstrating the proper way to eat a soup dumpling.

The bao buns at Ten Tigers are different from the fold-over style bao, made popular by chefs like David Chang and Eddie Huang. Ma’s are enclosed and resemble plump purses of dough, filled with minced meat, vegetables and seasonings.

Ten Tigers is one of several street-food-inspired eateries to open in D.C. in recent years. Ma’s explanation for the uptick is the diner’s desire for good fast food.

“I think people are … we go through cycles. And I feel like we’re in the cycle where we’re coming down from pretentious, complicated food to just really tasty, delicious food, which is what this is,” he said.

“This is me plating the food here.” (Ma took a hot dumpling off a pan and plopped it on a wooden serving board next to a bowl of hoisin-soy dipping sauce.)

“Kyirisan would be like tomato tartare and you’ve got to line up the mushrooms perfectly on top of black garlic puree and black garlic power. This is just as delicious as what we do at Kyirisan, but it’s all packaged in this little tiny dough package.”

The two-story Georgia avenue tea house also has an outdoor patio and an upstairs space for private events. Currently, it opens for cocktails and food service at 5 p.m. Extended daytime hours will be announced after the new year. 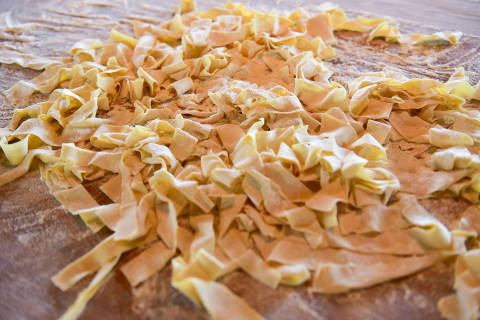