You can get this information in your inbox by signing up for the email newsletter here.

The Virginia primary election isn’t until June 21, but early voting starts Friday, May 6.

Virginians can now vote in person or request that a ballot be mailed to them.

There will be elections for all 11 of the state’s U.S. House seats in November, but not many traditional primaries. In all but District 8, the Democrats have only one candidate running. Republicans only have primaries in Districts 2, 3, 6 and 7. In the others, there’s only one Republican candidate, or Republicans have decided to choose their candidate through private party-controlled events, such as conventions, instead of holding a primary.

Check out the WTOP voter guide for more information on all that.

While Virginia was the center of national politics during its race for governor last year, it will not be as exciting compared to Maryland and D.C. during this election cycle.

Maryland voters will decide all 188 seats in the state legislature, along with governor, a U.S. Senate seat and all eight U.S. House seats. The primary will be held July 19, with early voting set to begin July 7.

In the District, early voting starts June 10 and the primary is on June 21. In addition to mayor, voters will make choices for attorney general, D.C. Council chair and five other council members.

A special election for mayor is happening next month in Hyattsville, Maryland.

It’s set for June 7, following the death of former Mayor Kevin Ward, who took his own life in Jan. at 44.

“We are all devastated by the loss of our beloved mayor and mourn with you,” interim Mayor Robert Croslin wrote in a letter to Hyattsville residents.

Croslin is among three candidates running in the special election, along with Danny Schaible and Vish Bhatt. Schaible serves as vice president of the city council; Bhatt owns a software business.

It looks like Montgomery County, Maryland, Executive Marc Elrich will have a tough primary in July.

Elrich won the Democratic nomination in 2018 by just 77 votes, so he may be in for the fight of his political life now.

The Washington Post said Elrich is “beloved by unions, who credit him with raising the county’s minimum wage, and loathed by ‘smart growth’ advocates, who don’t understand why he so often opposes building housing near transit.”

DC’s McDuffie is out, and he’s not happy

D.C. Councilmember Kenyan McDuffie this week suspended his campaign for the city’s attorney general following rulings from the D.C. Board of Elections and Court of Appeals declaring that he did not have enough legal experience to qualify for the office.

McDuffie is still pleading his case, saying he is “shocked.”

“I know that it’s the people who deserve to choose who the people’s lawyer should be,” McDuffie said. “Someone who served as a prosecutor, as a civil rights attorney in the United States Department of Justice, as a public safety adviser to the deputy mayor for public safety and justice, and a council member for a decade, wasn’t qualified to serve as attorney general. Let’s let that sink in for a moment.”

Under D.C. law, candidates for attorney general must be active as an attorney for five of the last 10 years. McDuffie unsuccessfully argued that his time on the council should count toward that.

With McDuffie out, candidates in the Democratic primary for attorney general include Bruce Spiva, Ryan Jones and Brian Schwalb.

The leaked draft of a Supreme Court decision that could overturn Roe v. Wade hit Capitol Hill this week like a thunderbolt.

Congressional Democrats immediately seized on the potential impact of the decision, which could throw out a precedent on abortion rights set nearly a half-century ago.

“We should move right away to make reproductive rights part of this November’s election,” said Sen. Richard Blumenthal, D-Conn. “Reproductive rights will be on the ballot.” Blumenthal served as a clerk to Supreme Court Justice Harry Blackmun, who wrote the original majority opinion in Roe v. Wade.

Senate Majority Leader Chuck Schumer plans to hold a vote next week on legislation that could codify Roe v. Wade, though it’s expected to fail. A vote on a similar measure earlier this year fell short on a 46-48 vote, with one Democrat, Sen. Joe Manchin from West Virginia, voting against it. Sixty votes would be required to overcome the expected Republican filibuster.

Democrats still feel they have a major issue to energize their base for the midterm elections, although it remains to be seen how much of an impact it will have.

For their part, congressional Republicans have been fairly low-key in their response to the potential ruling, choosing to focus on criticizing the leak of the draft decision to Politico.

While GOP lawmakers say they don’t want to get ahead of the actual court decision, they are also aware that polls show most Americans support Roe v. Wade.

The Supreme Court decision is expected to be announced in late June or early July.

What would the effect on local laws be? That was the subject of Wednesday’s DMV Download podcast.

Vance, 37, had been in third place in the crowded race before Trump came to the Buckeye State and told voters that Vance had his political blessing. While Vance received less than a third of the total vote, he still cruised to victory over pro-Trump state treasurer Josh Mandel and state Sen. Matt Dolan, who distanced himself from the former president.

Former Ohio Republican Party Chair Jane Timken had been endorsed by U.S. Sen. Rob Portman, whose planned retirement has created the open seat. Given that Timken finished in fifth place in the primary, it’s clear that Trump still has a strong hold on the party in Ohio, even though Dolan did better than some expected.

On deck: West Virginia and Nebraska

Political aficionados may be tempted to look ahead to the May 17 primaries, which will include big contests in Pennsylvania and North Carolina.

But this Tuesday, primaries will be held in the Mountain State and the Cornhusker State.

The two Republican lawmakers are battling against each other because West Virginia lost a congressional seat after the 2020 census.

In Nebraska, voters will choose the next Republican nominee for governor, who will be heavily favored to win in the fall. Polls indicate the hotly contested race will be a fight among Charles Herbster, Brett Lindstrom and Jim Pillen.

Since only Republicans can vote in the GOP primary, thousands of Democrats have changed their political party affiliation in recent months, likely so they can vote in this closely watched race.

What’s worth your time?

2022 midterms: What to watch as 5 states hold primaries 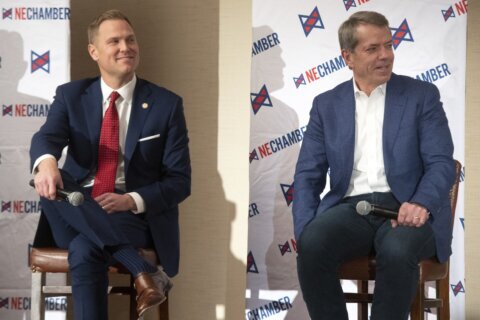 2022 midterms: What to watch in Nebraska, West Virginia